When the evil forces of an organization called CLAW have occupied a secret island, it’s time to tie your bandanna and free the world of another menace.

Mercenary Kings Reloaded is a side-scrolling shooter in the veins of Metal Slug that boasts a massive amount of crafting, what is there not to like? The action wasn’t as good as I first presumed, and unfortunately, since it’s a big part of a game like this, at times I felt like I was playing Mario. The same kind of enemies came at me, shooting one or three bullets at a time and walking from point A to point B. I was hoping that this game would feature massive bullet hell-type action like I’m used to in side-scrollers, but even the enemies were a rare sight. Most enemies just walked towards me like those enemies in the old Mario games.

Needless to say, the graphics pay homage to the old shooters, most notably the Metal Slug series. When looking at screenshots of this game, I presumed that this would be as fast-paced as the aforementioned classics and that I’d get pounded from every possible direction, but the more I played, the clearer it became that the main emphasis of this game is in collecting materials and crafting gear than in the action itself.

Speaking of crafting, there is a lot of gear to craft, from dozens of different gun parts that can be mixed freely with each other to build interesting weapons both look and damage-wise, to knives, food, and mods that grant passive bonuses to the player. The bigger the gun, the slower the character moves, and the shorter your jumps are going to be. With a pistol that shoots acid bullets, I was basically a breeze of Death, while with a full minigun I was a slow and heavy tank. Of course, jumping over obstacles was next to impossible with a massive weapon but I could put the weapon in my pocket and equip my radio so it didn’t hinder my jumping anymore. I love the logic! 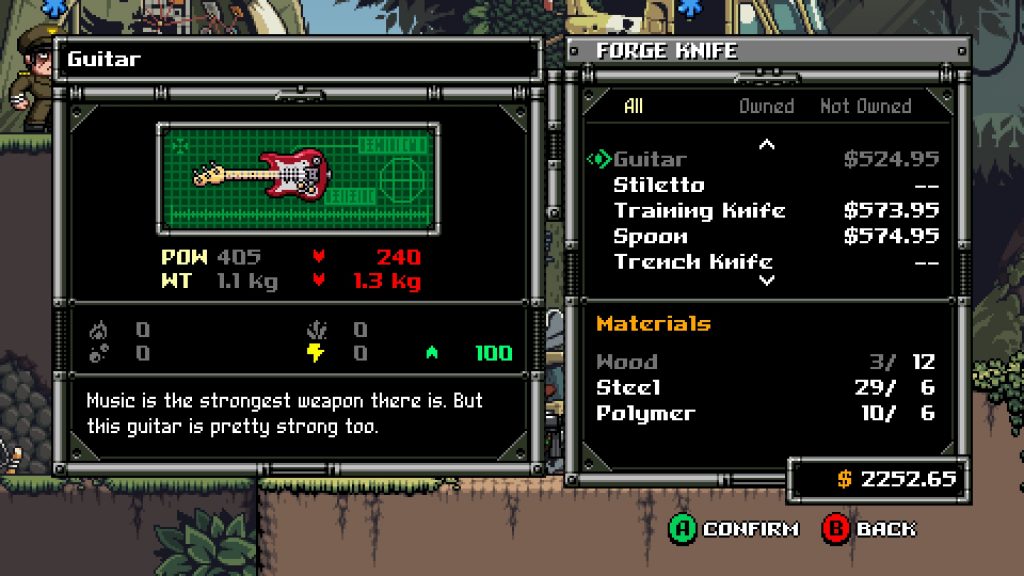 Missions are also plenty, with each soldier rank featuring multiple missions. However, there isn’t a separate map for each of them, so a lot of missions happen in the same areas. This was a two-sided sword for me. On the other hand, since I knew the way to the destination it took very little time to complete some of the missions. With that said, I have to wonder, does this game really needed this many missions in the same areas? This is even more confusing when you take into account that most of the missions offer a minimal amount of money, and not really any special materials either. Most gathering missions made no sense, for example, according to the story my camp needed 10 pieces of fabric and I had 72 pieces of fabric at that moment, why couldn’t I deliver the ones that I already had? Do I really have to go back to the sector I just came from? 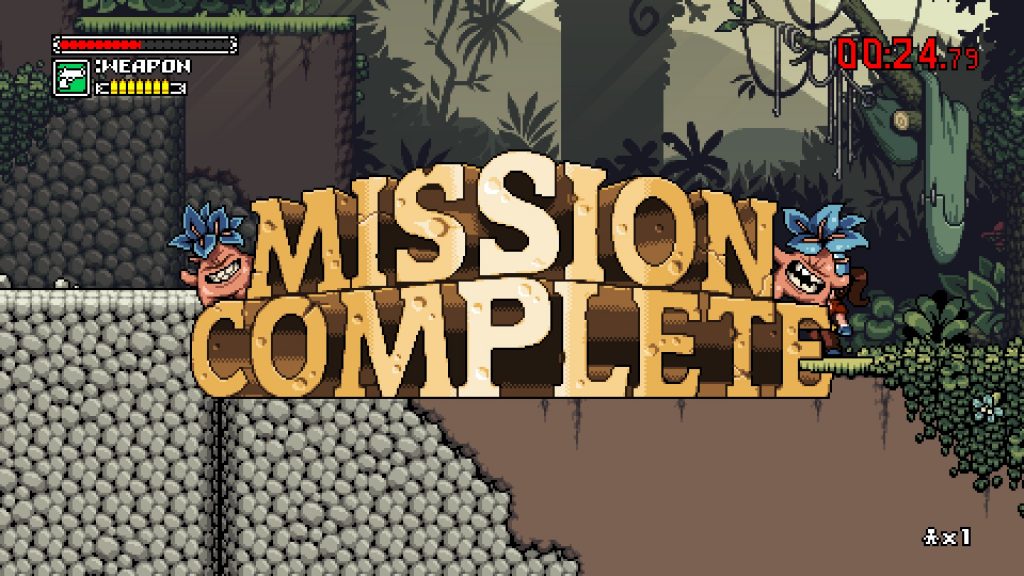 Despite all that, I did go and even got a few extra times! What can I say, I wanted those gun parts and some new shiny knives. Speaking of which, every area features a secret room with great loot, and I must say that I enjoyed hunting down these secret rooms in this game, just like I did in Doom when I was a kid. In general, the level design is nice, especially in the later levels that featured multiple paths and random rooms where I didn’t even have to go in order to complete the level. I enjoyed my time, especially the first times when I was exploring a new level.

I didn’t have a quarrel with the material grinding, but the pointless missions bothered me. There’s enough content in this game on the crafting alone, and I felt like I was progressing towards something when I collected materials. But I didn’t feel anything besides that I was wasting my time when doing the nonsensical missions.

I passingly mentioned that the action isn’t the main focus in this game. There are some boss battles that were fun, like this big metal dog in a narrow corridor that’s shooting missiles (yes I know, it sounds absurd, wait until you see that dog), but mostly the game is geared towards casual players. Normal enemies barely offer any challenge at all, as seen in the video. I’ve finished about half of all the available missions at the time of writing, and most of the story. The basic combat outside bosses hasn’t changed much in all this time, it still feels like I’m in the first stages of the game, just starting to play for the first time. 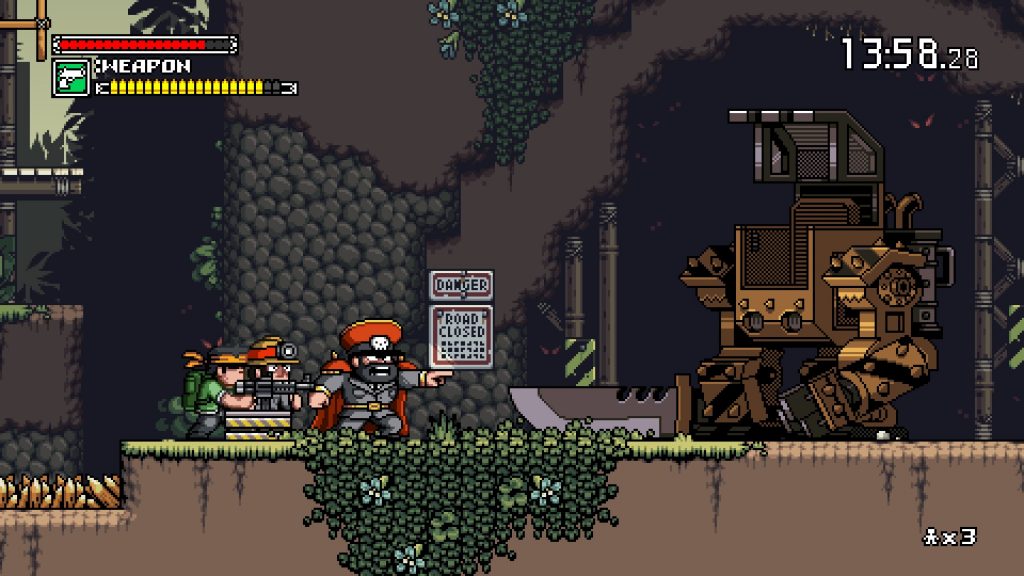 This dull action actually affects the enjoyment of crafting as well. There isn’t really a proper use for all the weapons I had at my disposal, and since enemies are few and far between, I was fine with my pistol or submachine gun. I rarely needed grenades or anything bigger than an assault rifle. This is a shame, and I have to admit that this decreased my motivation to grind for materials. With all the customization available for my character, I would have liked to see some real carnage, hard bosses, and multiple enemies swarming from every direction. Instead, in the early stages of the game, I was presented with 3 different bosses that looked and acted very much alike. As far as normal enemies go, they usually just shoot in a straight line with a lot of time in between shots and are generally alone. 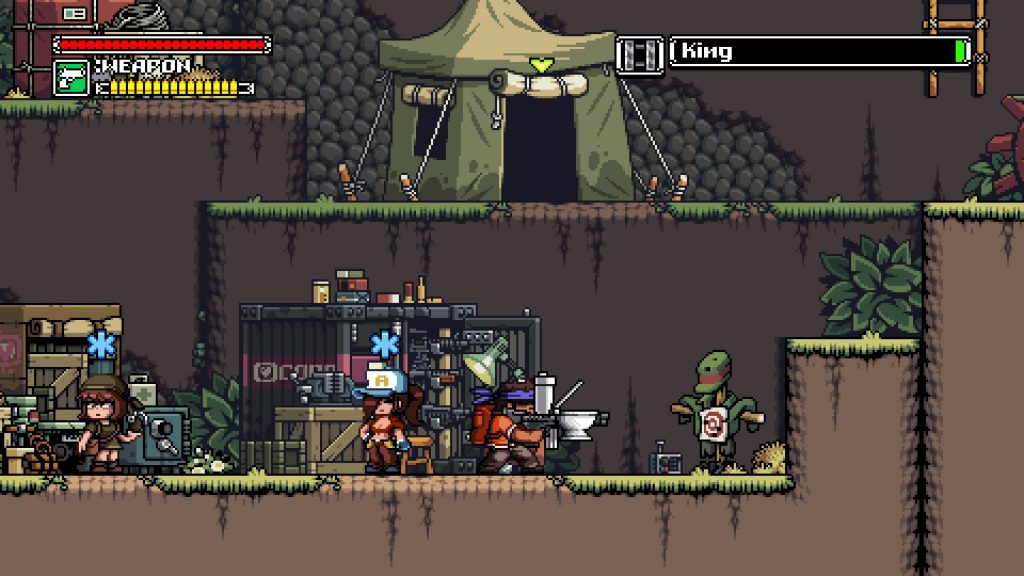 This is a pretty neutral game to me. There is a lot to craft and many ways to build the king of mercenaries, but the combat is a big letdown. The nice crafting system makes the combat even a bigger problem than it would be on its own. There’s not really a proper way to use the weapons to their full potential and really experiment with the combinations that the game offers since the majority of enemies are the same and there’s not even many of them per level.

It’s like all the good things that this game has, there’s the opposite negative aspect that pulls it down to that neutral area… The game has an interesting level design, but forcing you to play in the same areas multiple times while gaining next to nothing makes the player lose interest. There’s a great variety of weapons and customization on character, but this goes to waste thanks to the dull action and the fact that you really don’t need anything else other than a submachine gun and a knife.

If you’re into crafting and you don’t mind a repetitive game that is light in action then this is for you. But if you’re looking for a fast and action-packed side-scroller, then look elsewhere.