Unicorn Dungeon is mostly a clever point & click adventure game, but one with a tedious dungeon area that you must survive repeatedly in order to advance the story. Though often quite funny, the hybrid game design and anachronistic graphics are likely to alienate many players.

Unicorn Dungeon is a deeply odd take on the traditional point & click adventure game genre. Billing itself as an absurdist comedy, players should generally expect to be faced with some odd story and design decisions, and in that regard, the game does not disappoint.

The first thing that you’ll notice while playing is the game’s peculiar graphics style. The point & click portion of the game is entirely rendered in what appears to be fairly high-poly 3D. Though it’s hard to tell, this seems to include areas with locked, forced perspective, which would more typically be done in 2.5D for this genre. While that much is ambitious, something about the execution is generally off. Perhaps through conservative shader implementation, the game has the distinct feel of 3D games from the early 2000’s. Sort of a cross between Gabriel Knight 3 and Atlantis: The Lost Tales. 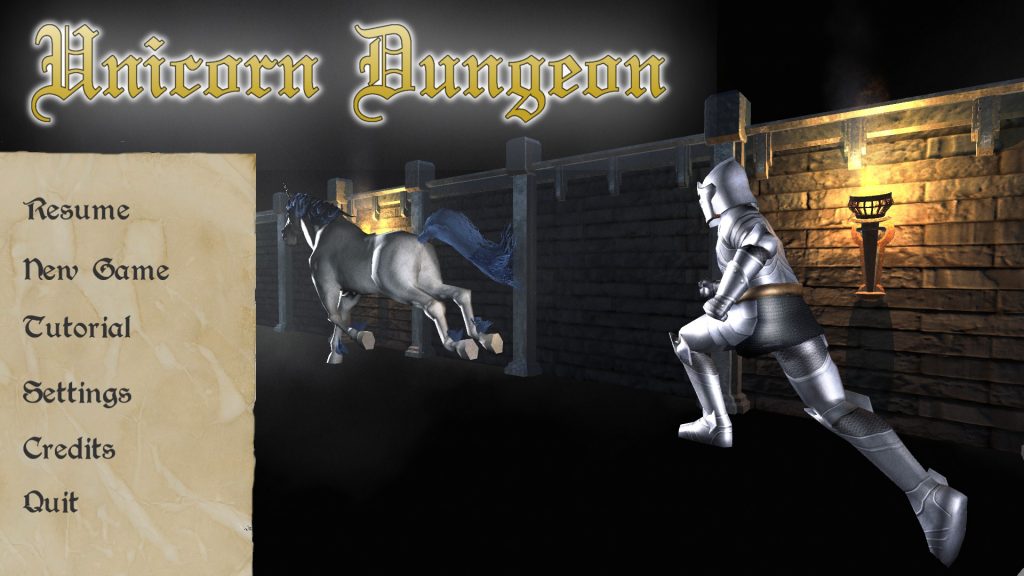 While that look works well enough for the story it’s trying to tell, it still comes across as old and requiring explanation. Making things all the more peculiar, the game’s 3D animations are generally solid. It probably merits saying that the graphics are not clearly bad – they actually work quite well for what they’re trying to do. They just seem extremely vintage in a way that people are not generally feeling nostalgic for.

The best feature of the game is its story. Well, perhaps not the story, but the jokes that the story allows the game to tell. The game (optionally) opens with a tutorial prologue, in which you learn the back story of the man who will grow to become Sir Typhil of Creulor. It turns out, poor barefoot Typhil was looking for the local dance competition (having already failed at it repeatedly), hoping to give it yet another go. Finding that a man recruiting knights for the king has taken over the shop, Tyril ignores the man’s suggestion that he intended to be across town and instead gamely replies to the recruiting effort with, “Ok, I’ll do that then.” The ridiculous flippancy smacks of a severe learning disorder, but is nonetheless genuinely funny. The recruiter, by contrast, is understandably skeptical, which helps to clarify a key point: though the game’s protagonist is obviously a bit simple, the game itself knows as much and is doing it on purpose.

As it happens, the test to become a knight is a sliding tile puzzle. In a particularly meta moment, the game flirts with breaking the fourth wall, giving a little shout out to the fans of point & click adventure games most likely to be playing. 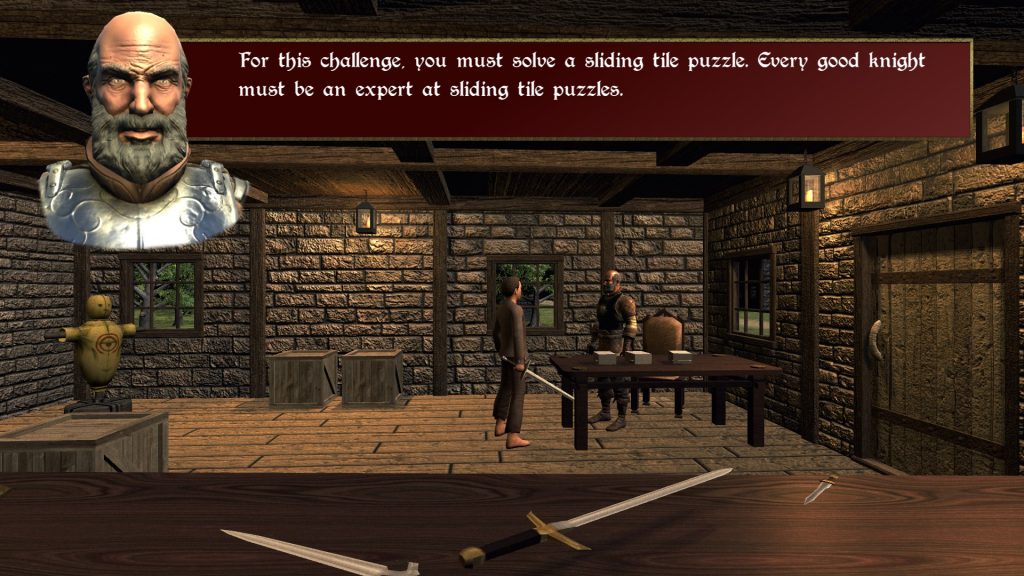 Slider puzzles are indeed a common trope in the genre, but closer inspection of this one reveals an unusual twist. Generally, slider puzzles feature a missing piece, to enable all that sliding. This one lacks that feature, distractingly replacing it with an unusual choice of subject matter. 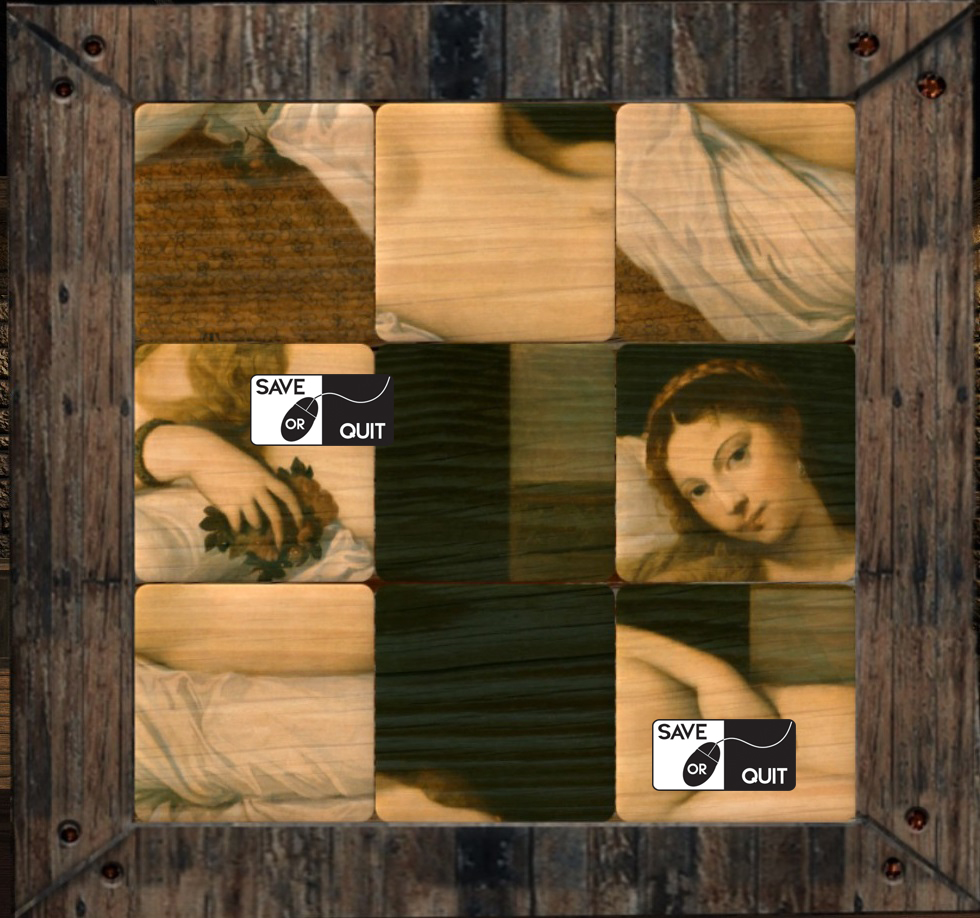 This begins the setup for what becomes a common theme in the game. You’re faced with an alarmingly stupid premise, but yet have to handle it in a reasonably clever way. So as to avoid spoiling the well-executed puzzle, suffice it to say that you can, in fact, solve a sliding tile puzzle with all of its pieces inset, provided that you’re willing to think outside the box a bit.

Along these lines, the puzzles in the game are always logical and almost surprisingly original. The game occasionally breaks out stock puzzle setups that have been done often enough to become tropes, but generally undercuts these with a twist on the premise that keeps things fresh. 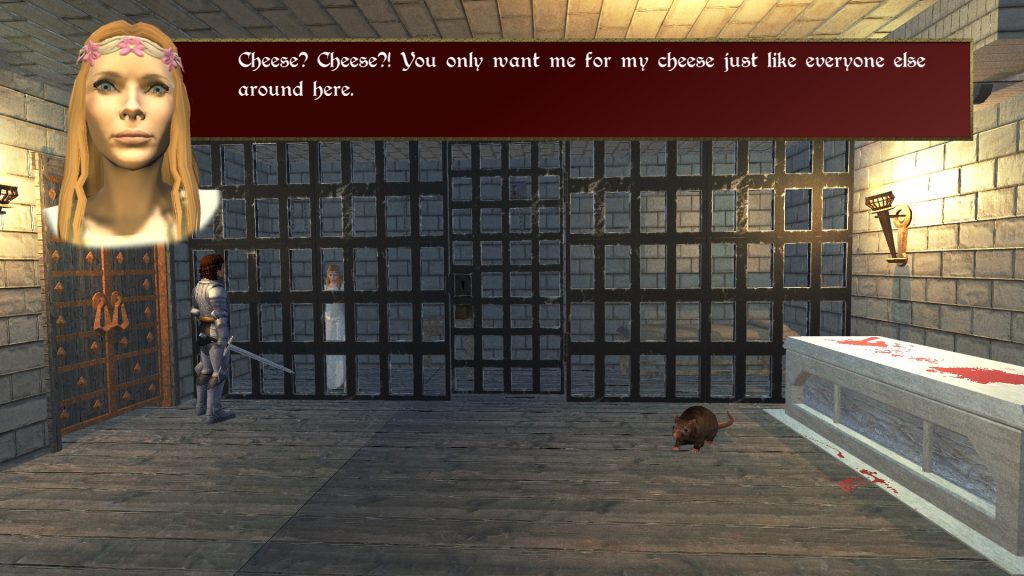 Following a short introduction, the main game opens with you walking down a very long hallway. Just as you begin to wonder what this is about or if you’re missing something, a guy passes you with a casual, “Hey.” He’s likely to have moved past you well before you’ve decided what to do about him, and thus you’ll pass two others before finally making it to the end. “It’s about time,” Typhil declares, as the Steam achievement ” Epic Journey” pops up. It’s honestly clever, though it hints at something the game never really manages to be. Including the hallway you just walked through, the game features no more than four rooms total. Five if you count the tutorial. Six if you count the dungeon. A game of grand exploration this is not.

The dungeon just mentioned is the area of the game that incorporates the game’s troublesome genre shift into rogue-like elements. Deciding if that dungeon should count as a distinct game area is a choice best left to the player, but fans of traditional point & click adventures most likely will argue it does not. This area is arguably more of a puzzle than anything, but it’s executed oddly and features a dramatic downshift in graphics to something out of the MS-DOS era. 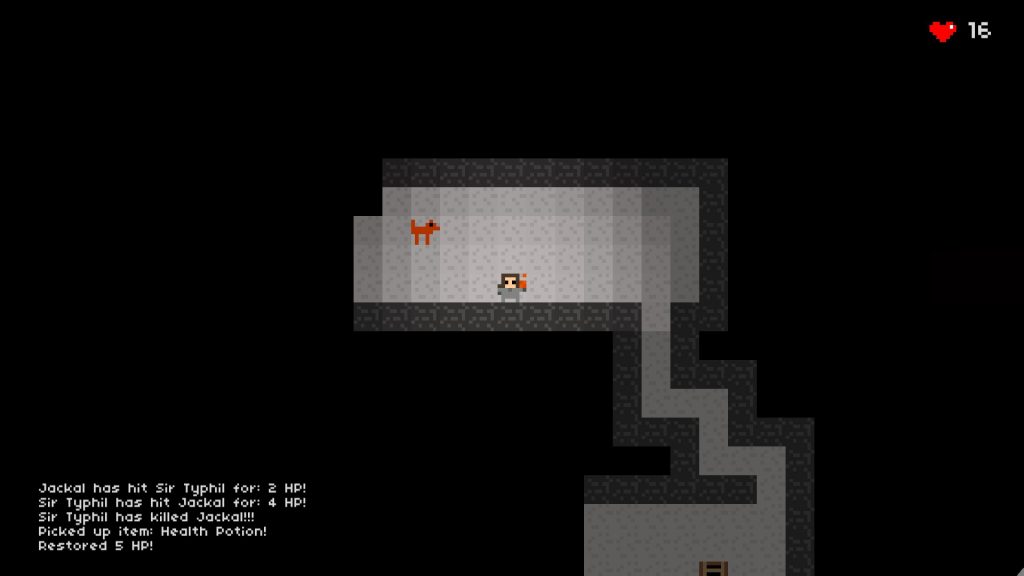 You navigate your way through blocky corridors using the WASD keys, and will very likely die a few times before you even quite understand what’s happening. Your health is displayed in hearts in the upper right corner of the screen, and enemy attacks will gradually lower this to zero. Specific enemies have a chance of dropping healing items, which can be used immediately or left where they dropped to be used later. Surviving this area requires developing a strategy for minimizing the damage you take from enemies while also learning to strategically make use of these healing resources. Point & click purists should expect to find this portion of the game infuriating, but may be relieved to hear that this section is arguably turn-based, as time does not move in this area unless you either move or take some other action. Hints for this area can be found in the main areas of the game, but even taking those into consideration, much of one’s success in this area seems to be entirely luck-based. Adding insult to injury, this section must be “beaten” a minimum of four times, and managing as much (or even just figuring out how to advance the story) should be expected to require many more than just that. You do not level up from the repetition. On the contrary, the game weakens your character in this area later as part of a plot point. Late in the game, you open up a new section of this area, which leads to a staircase to yet another level. As near as I can tell, this is a particularly cruel red herring that may not even be entirely finished in terms of game design. Enemies here display as blue “@” signs, and it does not appear to be possible to survive an encounter with one. Beyond that, your defeats while trying are likely to undo what progress you made in the previous area pursuing other goals.

There are other hints that the game is not as finished as the creator originally intended. You’re likely to discover a set of letters while trapped in one room that appears to map out the majority of a classic type of logic puzzle. These letters largely line up with the second area of the rogue-like sequence, and it seems strongly implied that you were meant to solve this at some point. But it doesn’t seem possible to complete the puzzle with the information actually in the game, and even if it were, it seems to serve no actual purpose except perhaps hinting at how to save some time looking for a secret passageway that would be far easier to find by randomly running into walls. 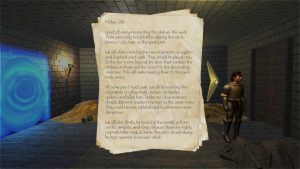 Still though, the game is generally enjoyable and features several laugh out loud moments. Featuring an unremarkable but pleasant soundtrack and irreverent plot points like the titular unicorn being an idiot, there’s quite a bit here that feels original and fresh. If fans of the genre are willing to overlook a rogue-like section making up a major portion of the game’s multiple-hour playtime, there’s a good bit of material here to enjoy.

Unicorn Dungeon is a funny, genuinely absurd take on the point & click genre, held back by a peculiar art style, unfinished edges, and the questionable inclusion of rogue-like elements likely to alienate fans of the genre. Generally enjoyable overall, for best results, don’t plan to take playing it terribly seriously and expect some extreme frustration with the repeated, vague dungeon quests.