Neon Chrome is widely said — by Genkipro — to be the best twin-stick shooter money can buy. But recently Genkipro had a rude awakening.

For anyone who hasn’t seen Neon Chrome, it’s a top-down twin-stick shooter with rogue-like elements from the masters of the genre, 10tons Ltd, more recently of Jydge, Time Recoil, and Tesla vs Lovecraft fame.

I was lucky enough to pick up a copy of Neon Chrome to review around the time it was first released in 2016 and I was hooked. The fantastic cyberpunk style, cool setting, and great graphics and sound are a perfect match for the outstanding gameplay. No other twin-stick shooter has given me anywhere near as much enjoyment for even a fraction of the hours that I’ve spent in the world of Neon Chrome.

Now Neon Chrome is getting a bit long in the tooth. It’s been out for a couple of years and has been bundled a few times. If you think you might enjoy a burst of frantic, but controllable destruction then I still heartily recommend it, especially since it’s available so cheaply so often. It continues to to be THE twin-stick shooter in my opinion; every time I play another I always compare it to Neon Chrome, and the contender always falls by the wayside. 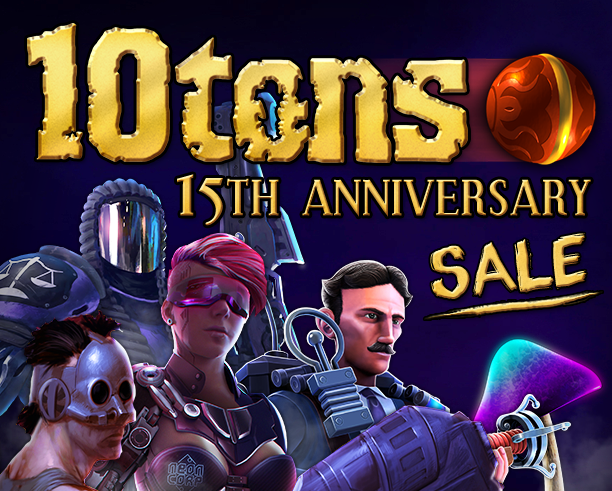 One day last year I was ranting to my colleague, JimDeadlock, about Neon Chrome. To my surprise, he listened to me — people only very rarely listen to me, especially when I’m waxing lyrical about some game or other — and bought it. Not to my surprise, however, he loved it. But I’ve always been slightly amused that he plays with a controller and uses a shotgun! A shotgun!?

Anyway, time went by and recently I saw that he was playing it again. He asked me about an achievement and in our conversation it was revealed that he had already beaten Overseer 5.0! How could that be!? I wondered. I had only beaten Overseer 4.0 and I thought there was no way any controller-loving, SHOTGUN-wielding upstart could possibly claim the Neon Chrome title!

So I started up the game for the first time in many months. The familiar title music and beautiful title screen brought a smile to my face. I dusted off my hacking rig and spawned another clone: an engineer, I think it was, though I couldn’t recall at the time what that meant.

I remembered my favourite weapon has always been the plasma sub-machine gun, so of course that was my first selection. And micro missiles; who doesn’t like micro missiles for taking out those troublesome shield-bearers and weird swarm thingies!? But the enhancements were another story. I simply couldn’t recall what I used to choose, apart from the Mediplus Nanites; converting energy to health was always one of my favourites, I knew. I grabbed a couple of other likely sounding options and that was it. I didn’t want to waste my hard-earned cash on what would surely be a failed run after all this time.

So, firing off a few test shots and trying to remember how these twin-stick shooter-thingies worked again, I entered the lift … .

It was a thing of beauty!

Sure, I took a few (hundred) hits. And yes, as I recalled it, the second-to-last enemy was a series of spiders in sections of a big room, and not a repeat of the centipede, which I admit took me off guard. And I admit, I did miss enough shots that my claimed superiority of mouse and keyboard controls over Jim’s touted controller was, frankly, distinctly unproven. But boy was it fun! Take a look for yourself (but please excuse the weird lag; OBS didn’t seem to cope with the game very well).

So, I’m now also a proud destroyer of Overseer 5.0. I know, I know. Jim did it first. It’s old news. But I didn’t know! How is a self-proclaimed champion supposed to defend his title when the challenger sneaks in in secret to steal it away!?

But do you want to know the best thing about all of this? Jim’s given up on the shotgun! The beauty of the plasma SMG has finally been revealed to him in all its glory. So I suppose my work here is done.