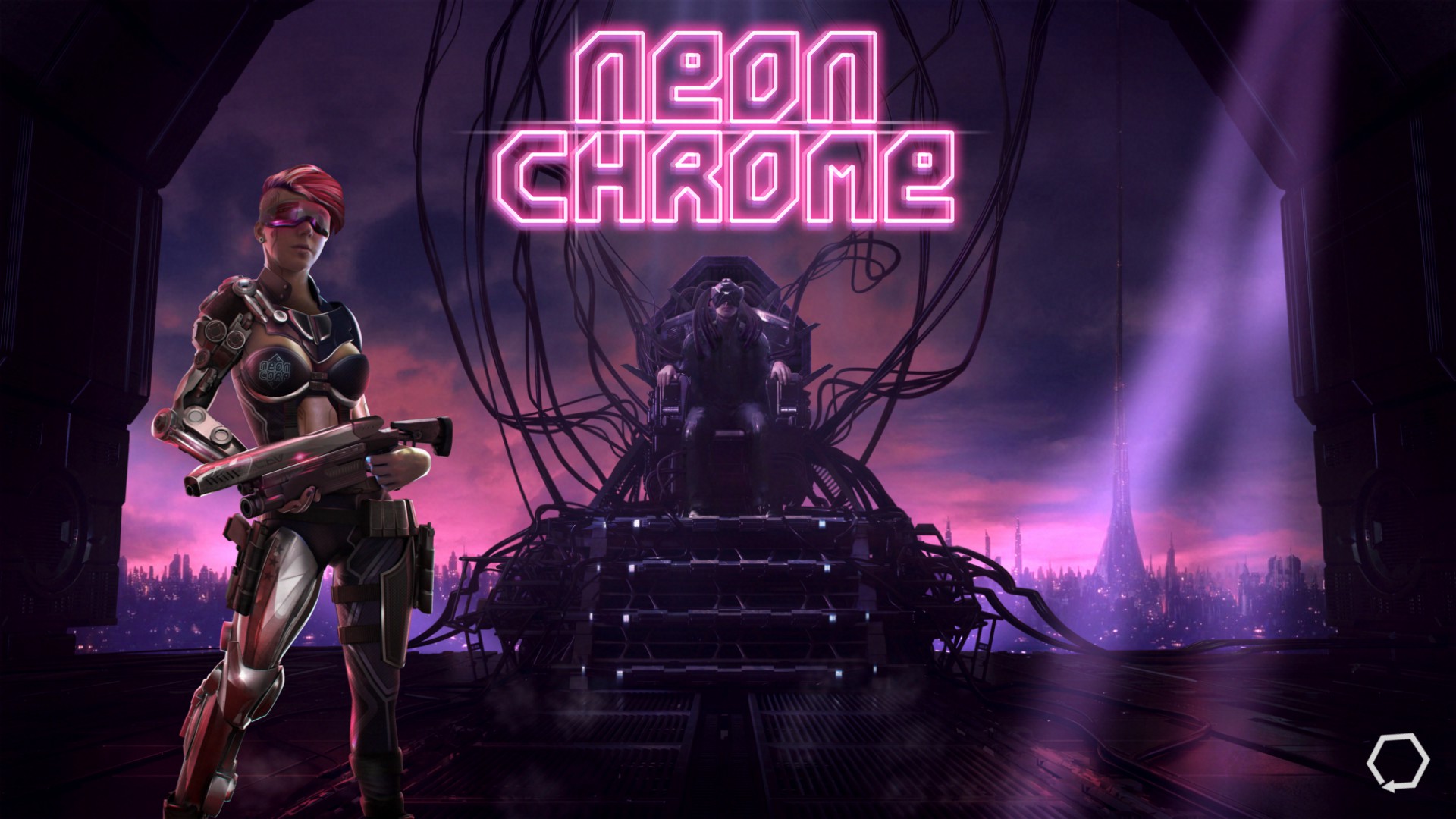 An action-roguelike from the creators of Xenoraid, Neon Chrome is a twin-stick shooter that sees you climbing your way through a procedural tower on your way to defeat the Overseer at the top.  Big on action, it’s filled with a lot of the same sort of quirkiness that can be found in Xenoraid. Xenoraid, at its core, uses a tried-and-true premise: claw your way through the many floors of a “dungeon” filled with horrible things that want you dead, until you reach the final floor where your ultimate target awaits.  Basic stuff, easy to understand.  Which is a trend that keeps up throughout the game.  It does a good job of explaining itself to you, with a nicely done tutorial that goes over the basics in a way that’s very easy to understand, giving you practical examples of how each different mechanic works and how you might be using them during each floor.  Being a twin-stick game, you will of course be doing lots and lots of shooting, and this is the core mechanic that absolutely everything else revolves around. There is more to the game than just shooting though.  This game is very far from something like Nuclear Throne, as combat is a much more careful affair than some other shooters of this type.  Enemies often attack with bullets that move much faster than your character can really dodge, so there is a major emphasis on using walls and objects as cover.  This isn’t always effective though.  There are two types of walls: thin walls can be destroyed by pelting them with enough gunfire, while thick walls are indestructible.  Most floors will mix these up nicely, and recognizing full cover and fragile cover is pretty important if you want to stay alive.  What’s more, your enemies are very capable overall.  They have no trouble navigating the complicated labyrinths, with good pathfinding that never seems to get stuck on anything.  As deadly as many enemies are, a frontal attack is often not the best idea.  This is where your other methods of violent destruction come into play. You have a melée attack, and while the game might seem focused on shooting, this is often the way to go… your guns aren’t everything in this game.  Enemies aren’t magically aware of your position, and must actually see you before they’ll come after you.  If you can avoid being spotted, and get behind them, you can use your melée strike for a sneak attack, granting a huge amount of bonus damage, allowing you to quickly dispatch an enemy that might normally be very dangerous to deal with.  This of course isn’t viable all the time, but even during normal combat your melée strike is still very useful.  One tactic I found myself doing often with certain foes was leading them into certain areas, and leaping out at them for a barrage of punches the moment they turned the corner.  This is usually both effective and satisfying.  In addition, you also have an energy attack, a limited yet very powerful ability that can get you out of a tight spot.  Energy drops are actually fairly common, so you don’t have to be stingy here and can use this as you see fit. In some games of this type you get abilities like this, yet they almost feel ignored due to how rarely you’ll use them.  The fact that this isn’t the case in this game is a major point in its favor.  You’ll always have a use for the various options the game presents you with, and you’ll be using them often enough for them to feel like they matter. Of course, this is a shooter at its heart, so while all of those special elements are important, it means nothing if the ranged combat isn’t up to par.  Fortunately, this aspect of the game is just as satisfying and well-done as pretty much everything else.  You have a variety of different weapons to find and unlock, with different damage types that are sometimes more effective against different types of foes.  Everything from slow-firing rifles to guns that just spray bullets all over the place can be found here.  Learning to use these weapons properly is very important, as your character is a bit fragile, and healing items of any sort tend to be very rare.  And of course, there is permadeath, of a sort.  So you want to be very careful with how you approach things, and learn to use all of the game’s mechanics as best you can, choosing the right methods for each situation to minimize risk. One issue with the game is that there isn’t very much to do that isn’t directly combat-related, and there aren’t all that many important choices that you’ll need to make.  There are special “cyber enhancements” that you can find, which are special upgrades that can be installed into your character, and while these are interesting they come up rarely, and often just don’t feel like they have much of an interesting impact on your character.  And then there’s loot in general:  usually boxes of loot will contain pretty much nothing aside from yet more credits and energy.  Sometimes you might find a gun, or even an unlock of a new weapon or enhancement, but credits and energy are what you’ll find in 90% of the chests you’ll find.   Credits don’t really lead to much during a given run, either.  There are no shops to be found, no special items to choose from and buy.  On a given run, while the combat is fun and the levels are complicated and interesting, running around and shooting is pretty much the only thing you’ll be doing, with little in the way of a character build to work with.  This is a rather disappointing aspect of the game, and I feel like much more could have been done here. So if there are no shops, what are credits even for, then?  Well, that’s where the game’s progression system comes into play.  This isn’t the sort of roguelike where you lose *everything* when you die.  It’s the sort that uses a permanent progression concept, where you can improve your character’s stats and such between runs, and these improvements will carry over towards each subsequent run.  Not only that, but as you defeat bosses and progress to new sections of the tower, new elevators in the starting area will unlock, allowing you to just jump straight to those sections rather than go through every single floor all over again.  Considering how huge the tower is, and how many floors there are, this is fortunately a good thing.  You’ll still be knocked back a number of floors if you die, and you’ll lose your enhancements and equipped weapon, but you aren’t knocked so far back that it would become tedious and frustrating to have to climb 20 floors just to get back to the part that is currently challenging for you. Of course, that aspect of the game is very subjective.  The lack of frustration, and the constant feeling of accomplishment can be good for some players, but others may not find the system quite as rewarding.  The game can end up feeling kinda grindy at times, knowing that if you simply improve your stats enough, you’re likely to progress, even if you aren’t doing so well.  This can lead to less satisfaction from defeating tough foes and reaching higher floors, among other effects it produces. It can end up feeling that the game is less about actual skill, and more about simply improving the numbers that drive your character.  This however isn’t really the fault of the game itself, but an inherent thing that happens in any roguelike that uses this type of progression.  It’s very much up to the individual player as to which style they prefer, and it’s an important thing to think about when considering buying the game. There are a few other issues that can crop up here.  For example, some floors can become a bit too overrun with enemies.  There are times when you might enter a new floor, and find that there are so many foes packed nearby that you barely have room to deal with them, and even if you get through that, it can feel a bit unfair at times, particularly in a game that takes such a calculated approach to combat in general.  Some types of threats can also give that same feeling, such as turrets mounted to walls for instance, which can be very hard to spot until they’ve already started firing their super-fast bullets at you.  The game also has the bizarre habit of putting locked doors in very strange places, often blocking off rooms that have nothing at all inside, or even putting those doors into thin walls, where you can smash up the area to the point where even the locked door shatters.  Sometimes there are a great many such doors, and it is always very frustrating to realize that you’ve used one of your keys on a totally pointless door, when it could have been used to gain access to an upgrade chamber or weapon box.  Bosses, while exciting, can also be a bit wonky, such as the centipede boss, which not only uses a huge array of regenerating shields, but also spawns a constant swarm of robots that require shooting, which can make the fight drag on quite a bit depending on your current stats and weaponry. As far as presentation, things are very good overall.  This isn’t one of those games that tries to be super gritty.  This is instead a very colorful game, with well done lighting that creates a lot of visual appeal, and which also makes sure that you can easily see everything that you need to.  Important elements like keys, loot boxes, elite enemies, or other things are marked well to make sure that you cant miss them.  Add this to the good soundtrack and sound effects, and easy to read UI, and the game really shines overall. Overall, I’d have to say that this is a pretty high quality game that has clearly had a lot of effort put into it.  It has a few missteps, and the lack of important choice-making hurts things a bit, and the progression system might put some players off even while it draws in others.  Excellent combat, interesting and complicated floors to explore, a great visual and audio presentation, and just good gameplay and polish overall really make up for those things and make this a game that any fan of roguelikes or twin-stick shooters should have a look at.  You’ll find a lot of value here in a game that’s more than worth your money.  Highly recommended.