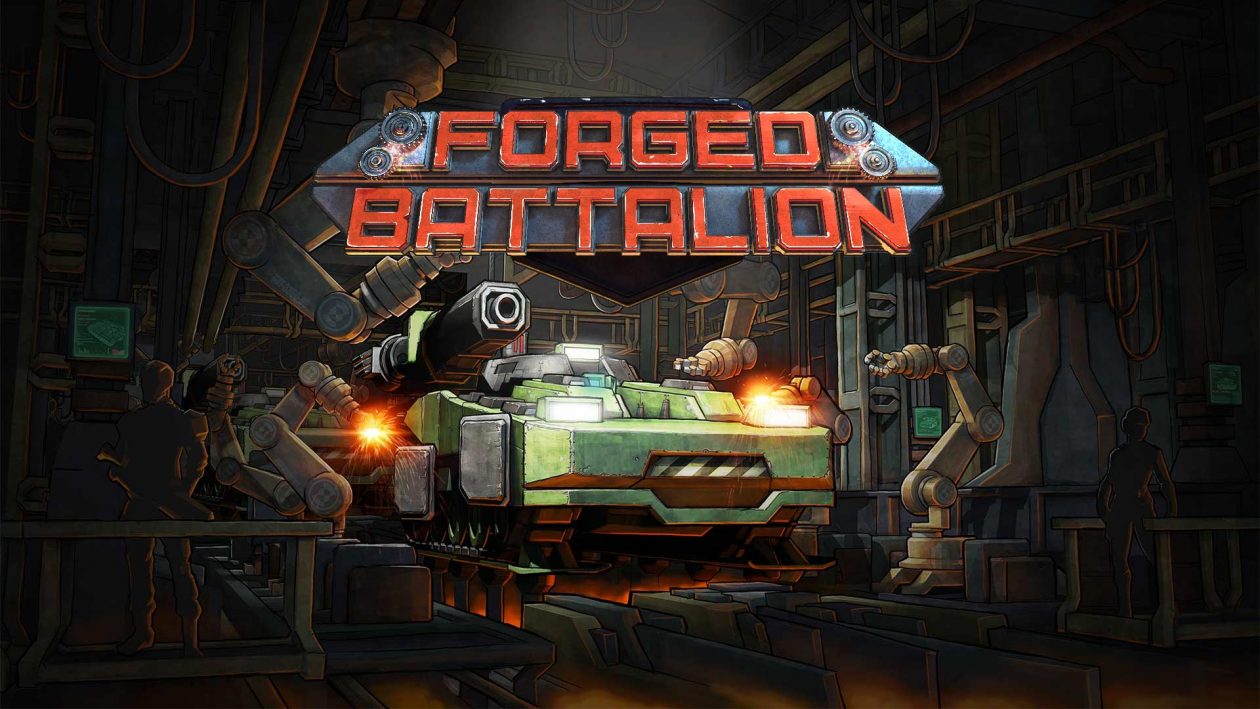 An RTS in the vein of Command & Conquer, in which you can customize your own armies.

Back in 2003, when Electronic Arts shut down Westwood Studios (Command & Conquer, Red Alert), a few industry veterans from this legendary studio subsequently founded Petroglyph Games. The studio became known thanks to Star Wars: Empire At War, and more recently thanks to 8-Bit Armies. 8-Bit Armies is a simplistic take on the C&C formula, and Forged Battalion seems to be the next logical step, since it has better graphics, and presents more gameplay possibilities. As the title implies, players are tasked with forging their own armies, rather than simply picking among existing factions.

For those unfamiliar with the C&C formula, I will summarize it quickly. These are real-time strategy games with base and army building, with the economy aspect being based on Harvesters gathering minerals and delivering them to a Refinery. On top of that, there is also the electric power that needs to be generated in order to keep buildings up and running. Once Barracks and Factories are built, infantry and all sorts of vehicles are produced to attack the enemy. Eventually, players will get access to devastating nuclear strikes or powerful orbital ion canons. 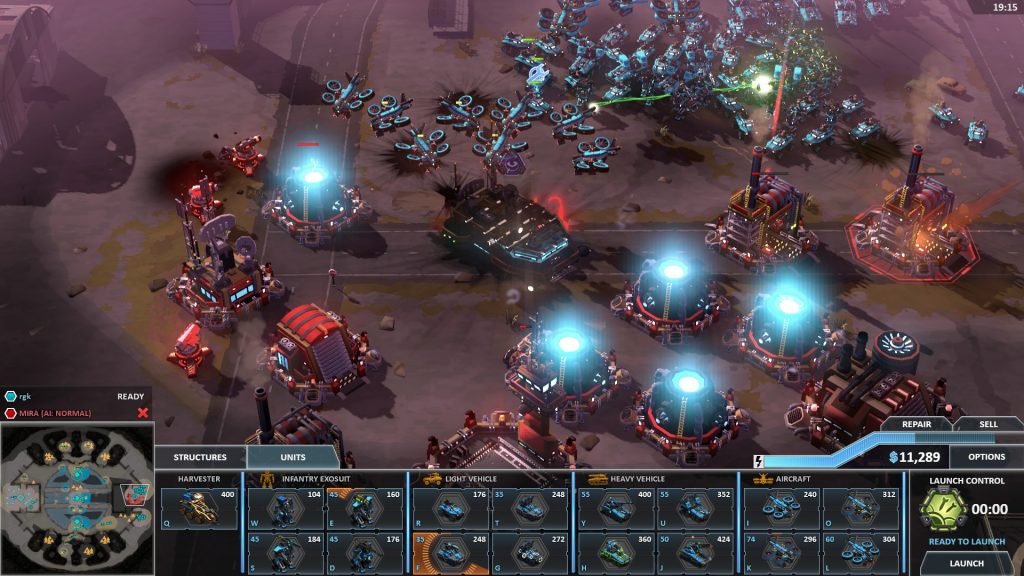 The only unfamiliar game mechanic in Forged Battalion is the addition of Outposts, which are small areas that can be captured in order to allow the construction of new buildings in specific areas of the map (“expansions”), thus replacing the old Mobile Construction Vehicles from C&C. This makes the different maps more interesting, as these hotspots are important in terms of economy and map control. However, Communication Centers (used to be Radars) are required for the capture to take effect. This is strangely the only thing that this building does, as the minimap is (thankfully) visible right from the very start (I always hated not being able to see the map in C&C games). Nonetheless, there are already too many buildings in the game, and for Outpost capture, this useless Communication Center could have been replaced by a simple technology requirement (build Barracks + a Factory). Besides the disappearance of Radars, another quality of life improvement is that aircraft do not need to go back to base to rearm, and silos are not required anymore to store money. 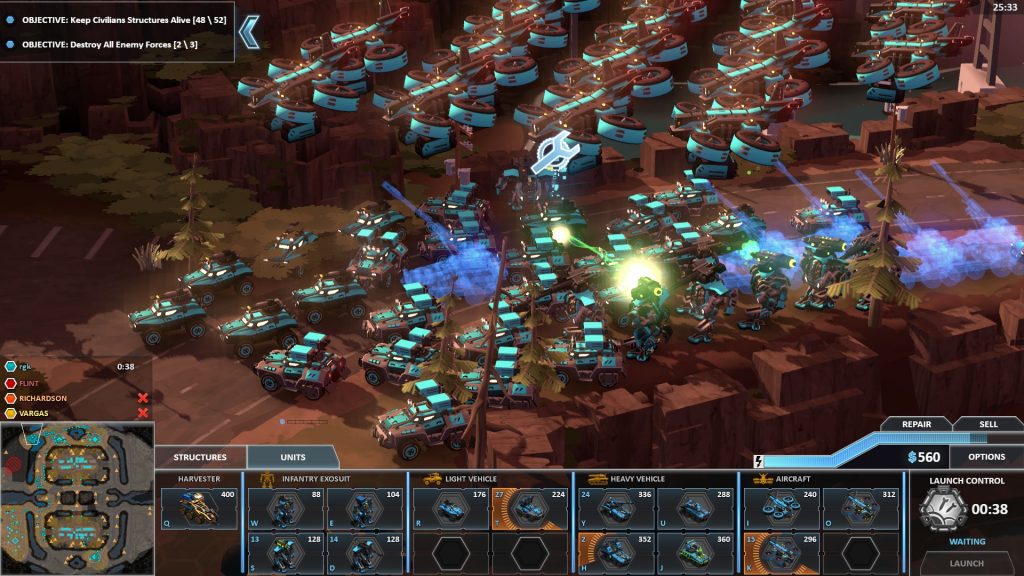 While in Blizzard’s RTS games each worker can construct a building while being tasked to follow up with another, C&C construction happens inside the HUD and progress only takes place when resources are available. In Forged Battalion, the placement of the building has to be decided at the start of construction (like Blizzard); however, it’s only one by one and it is extremely frustrating not to be able to queue up constructions. Having to switch the view back to base whenever something has to be added is unnecessary busywork. Something else that frustrated me is that armies do not match the speed of the slowest unit, instead each vehicle rushes to their destination regardless of wherever their buddies are. Ultimately, this means that, if not carefully micromanaged, weaker light troops literally run straight into the enemy meat grinder and instantly die, while the rest of the army drips into death one by one as they arrive at their destination. 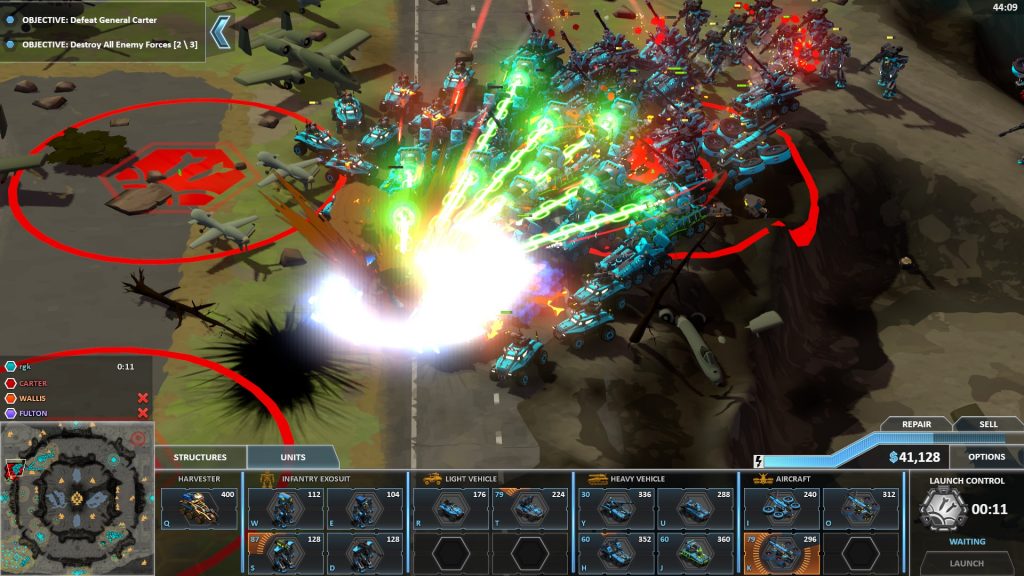 Just a quick paragraph to mention that the game is technically sound, it runs well, all the usual shortcuts and commands are here and can be rebound to different keys. The AI does its job well according to the difficulty level, and I have nothing technical to complain about. Just a minor complaint towards Harvesters which can sometimes valiantly charge in the general direction of the enemy camp to collect resources rather than the closest safe deposit available. 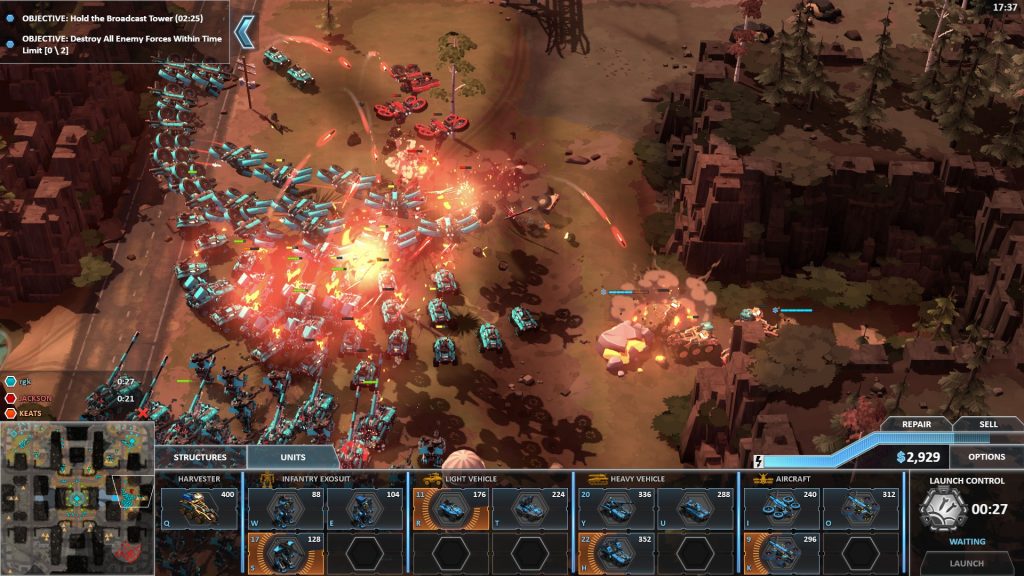 All this talk about small things and I have yet to address the most important feature: players can design their own armies before going into battle. Playing battles rewards players with points, which can be used to purchase weapons and technologies in a gigantic tech tree. These technologies encompass almost everything that has been seen in Westwood games: ballistic weapons, flamethrowers, lasers, nuclear fusion, ion cannons, sonic waves, and so on. The variety on display is vertiginous, and the drive to unlock new technologies constantly brings back to the game. However, I only unlocked roughly 2/3rds of the tech tree in about 10 hours, which is too slow. Most of the early unlocks are good enough to make a deadly army, but it’s still a bit unfair when you fight against people that have fancy super advanced techs or counters. 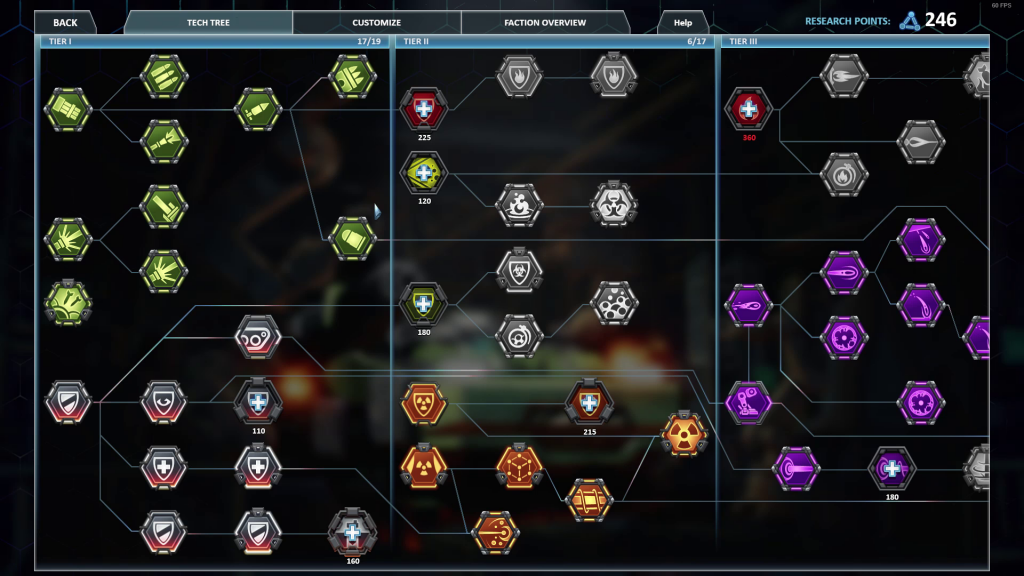 Unlocked techs are fitted on a base chassis, and there are chassis for infantry (I love these cute little mechs), light vehicles, tanks, aircraft, and turrets. For each of them, you have to choose a weapon, then you can add a defensive tech (shield, stealth, and so on), and finally a movement modifier (hover, jetpacks, tracks, and so on). Each addition means that the unit will require a much more developed base camp before being built, which is important to keep in mind. There are 4 unit picks per factory, so there is some leeway to balance between early and late game units. All of this tech and assembly is definitely the best part of the game, and when it comes to your final army, this allows for an insane amount of combinations between units of different types. 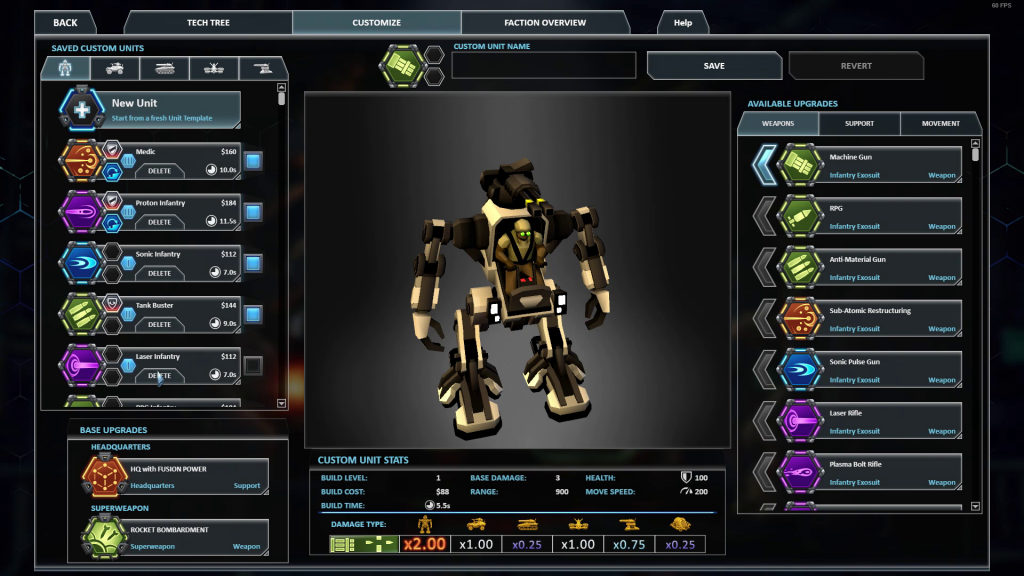 The information of what each tech does is mostly well communicated; however, it is hard to imagine how the unit would behave once in-game. Having to go through a new game and building a base just to see is too time-consuming, I would have preferred to see a sandbox directly attached to the customization menu. I am not a fan of the way that the game displays base damage for each weapon but not damage per second, which is a much more important metric. Also, missiles curiously lack area of effect destruction as well as friendly fire, which would make their use much more tactical and dangerous, rather than just a basic damage modifier according to unit type. Actually, the usual rock paper scissors is much more complex here than in most RTS games, as each weapon has a different damage modifier according to the enemy unit type (i.e., x0.25 against Infantry, x1 Light Vehicle, x2 Tank, x1.25 Aircraft, and then the buildings). There are a huge amount of technologies, each having its unique effects. Since players are producing all type of units and techs, it becomes very important to have a balanced army at all times. Mass producing a single type of units like in most RTS games could potentially be suicide here. 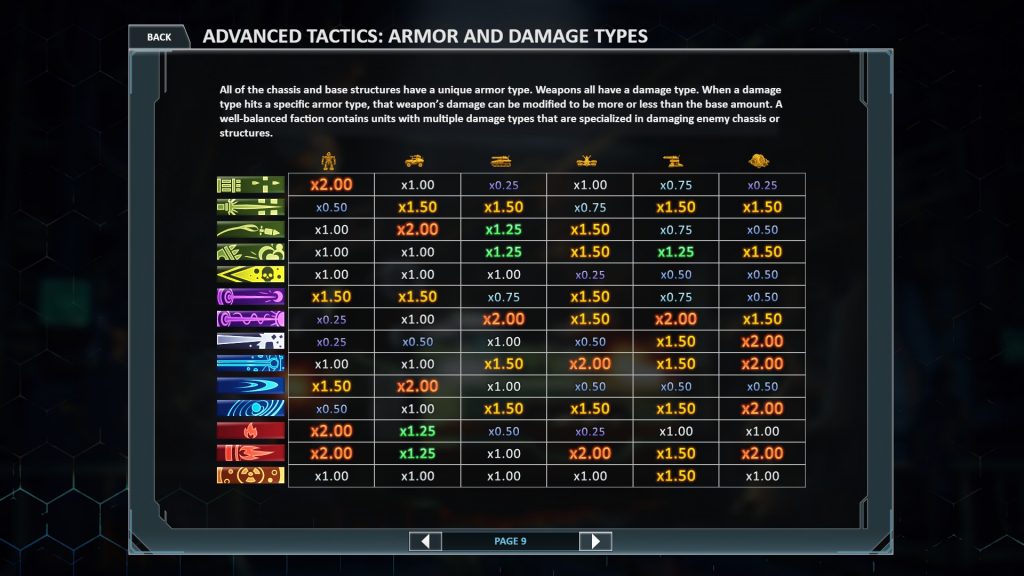 A flourishing economy will produce a huge number of varied units very quickly; however, I felt like I was drowning under all these units and that I jumped into massive battles without really being able to micro-manage according to the modifiers I had so carefully picked while building my army. In these moments, I wished that I could also program the AI of each unit type to tell them what to target in priority because in Forged Battalion there is too much on the screen, and it all happens too quickly for careful micro-management. In that regard, older Blizzard titles had much better pacing, as well as a smaller number of troops, in order to let players use correctly the specific role of each unit. In Forged Battalion, the scope is too big for tactics to matter once two armies collide. And then, all this effort on customizing troops goes down the drain. 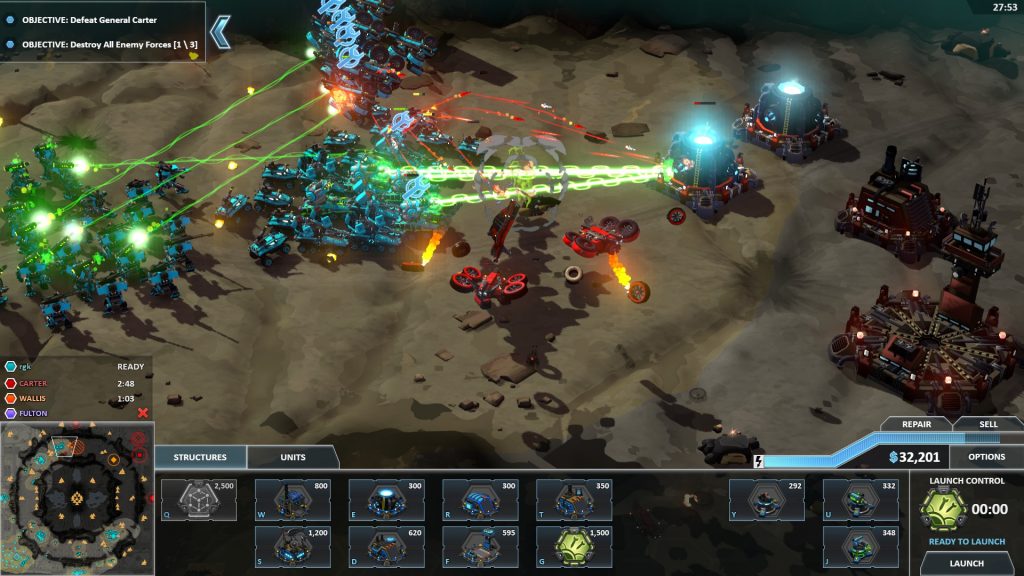 Another downside of this modular approach is that landmark units, such as the Mammoth tank, are missing, along with the identity of the armies. Since the customization is functional rather than visual, a defining visual style was lost. Same goes for the background of the maps and the missions, it’s all very bland and clearly not as appealing as the apocalyptic atmosphere that was oozing from the C&C games. However, there are some great music riffs fitting quite nicely. 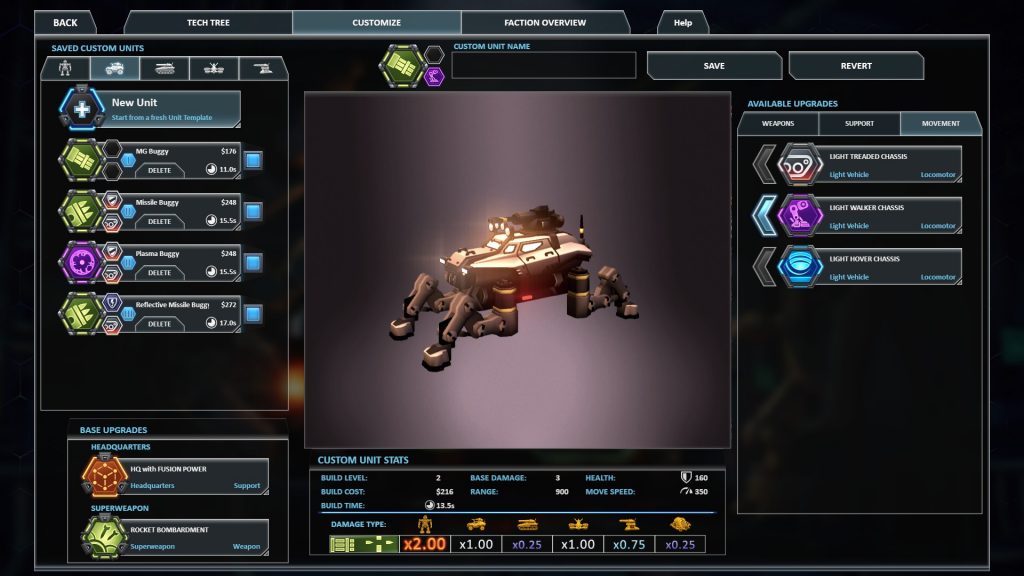 Since I mentioned the missions, single-player is a huge letdown. There are no FMVs, no cutscenes, just dry blocks of text before a battle and then a few lines during the mission themselves. There are always a few different secondary objectives (protect this, destroy that), but then it invariably ends in “destroy all the enemy forces on the map”, which becomes tiring. The game ends up feeling like each battle has the difficulty of a final mission. If I want to destroy the enemy base, I play skirmish mode! When playing single-player in a modern RTS, I expect the missions to put emphasis on learning about specific weapons/features or be original and unique and completely different from the previous and the next. (WarCraft 3: The Frozen Throne was the first to really pull that off, even though the first C&C games also had those amazing commando missions). 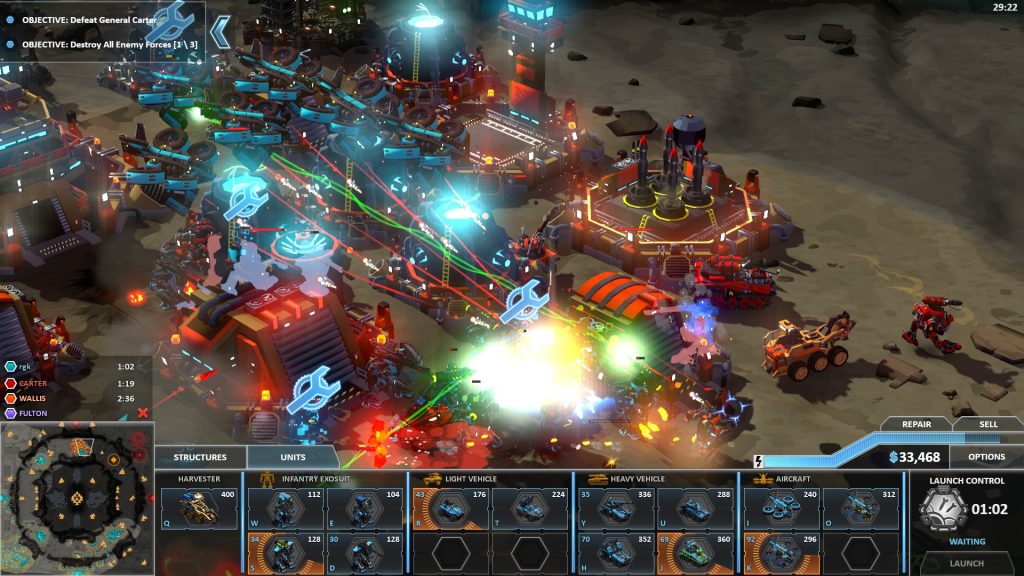 If the armies have no visual appeal and the single-player is bland, then it does not matter that the game offers great customization features for hardcore players; the general audience is not going to be pulled in. The number of players has been dwindling, although it is thankfully still possible to find matches. It seems like the game is nearing the end of its Early Access phase and won’t receive that many new changes, and thus I don’t really see a bright future ahead for Forged Battalion, despite the obvious talent on display. Letting the players build armies from such a vast array of possibilities is ambitious, the maps are well designed, but the game has trouble finding its feet. The game has too much scope for its own good, while the single-player component and the atmosphere are severely lacking. Despite my negative observations, I genuinely enjoyed the time spent unlocking technologies for my faction and thinking about what units to create. I am merely trying to dissect what makes this game tick and whether it will be enough to seduce players or not. 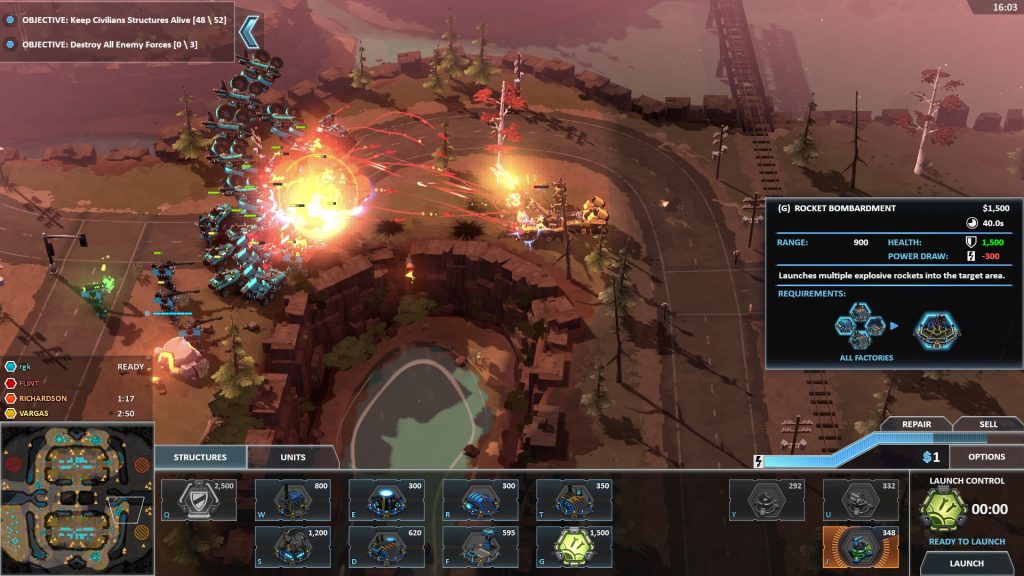 Forged Battalion brings extensive unit customization to the Command & Conquer formula. Have you ever dreamed of building your own units? Now you can. The tech tree takes a bit too long to unlock due to the insane number of available technologies, but unlocking new destructive weapons feels very satisfying and can draw players back to the game for a large amount of time. However, the single-player component is not very exciting. Finally, the micro-management is unnecessarily involved during the base building aspect of the game… while it is almost unmanageable when it matters, during battles.