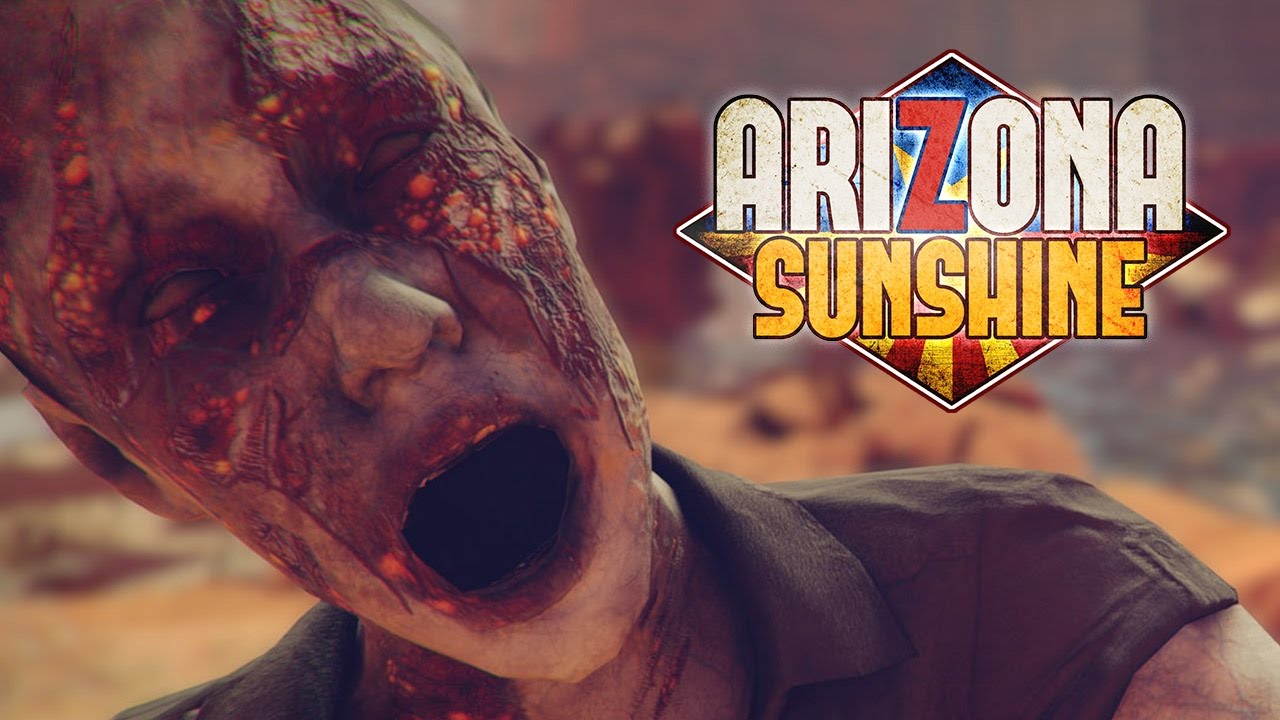 The Zombie Apocalypse in VR! We talkin’ “Evil Dead” levels of awesome, or stuck in that Underground Bunker watching “Zombie Lake”? Let’s get knee deep in the dead and find out!

Zombies… I know, I know… what you’re thinking; That’s been done so many times and let’s be honest, it has been done in so many great ways. So, the question is, does VR really make a difference? Well, that’s really hard to determine, as VR is intrinsically subjective. Different people find it overwhelming, magical, nauseating, or don’t see what the hype is all about.

Allow me to elaborate; I have provided quite a large number of people the ability to try VR, and while some were awe struck on their first time, others were like “Yeah, this is pretty neat”. What is important though, is that both groups had both reactions; For example… For one person, The Climb would get elated giggles, but DOOM VFR was “Just Meh”. However, for someone else, DOOM VFR made them exclaim “Dude, this is unbelievable!” yet The Climb received, “That’s all you do, climb rocks?”. So VR is not going to automatically elevate the fun factor or replay-ability of a game, and the game’s subject matter really needs to appeal to you in the first place.

So, while gaming in the VR space is growing, the ability to enjoy a game depends on the player, the hardware/budget, and the player’s tolerance for being “virtually relocated” into a digital world. It is also heavily influenced by your personal taste as far as games go, and finding the right titles could make you want to drop thousands on a gaming & VR set up.

TLDR: Arizona Sunshine is not going be for everyone, but it does have a lot of really stellar qualities if you can overlook some rather disappointing drawbacks and a few near-unforgivable bugs.

Stick around and let’s talk about that… 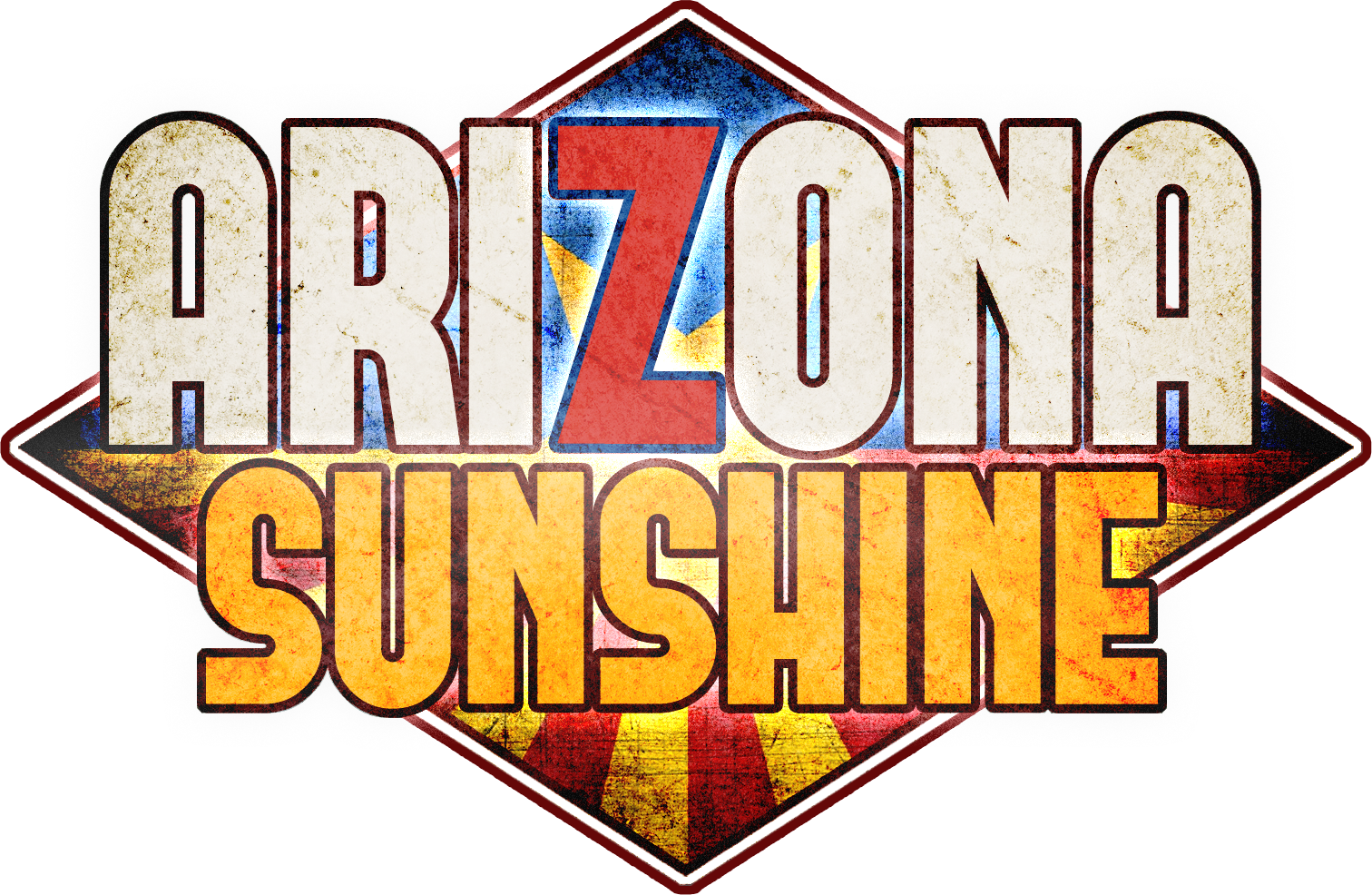 Gameplay – “Is that blood on your zombie?”

There are plenty of zombies that you will face, some with biker helmets, others with giant growths, football jocks, military units, hell, even women in their underpants. With that in mind, each type has a weakness, it’s called their head, well, except the ones with helmets, because bullets bounce right off, so you have to get creative.

The selection of Firearms is great, and the limited carry capacity really makes you sit and swap back and forth with the same two guns… “No, this one… no… This one! aaaahhhh!!!! No, that one!”. This leads to some tactical planning and critical thinking because you might love the uzi, but if you’re capped out on pistol bullets and have 2 clips of Uzi ammo, well, you might want to aim better with the Glock rather than spray bullets with the Uzi.

Headshots not only reward you with faster kill time for less ammo but achievements as well.

I was immediately enamored with the choice of the main protagonist (you) narrating to himself. I feel this is how a real zombie apocalypse would twist the loneliness in a person to drive them to talk to themselves. I kind of felt like this was “borrowed” from the Serious Sam series, since it has a similar Quip filled One-liners, and it gives the main character a likable side, yet, you feel some form of pity for his situation.

The storyline is not Game of Thrones caliber, but it keeps you interested and moving forward as the plot unfolds. There are some moments that took longer to get to than I would have liked, and the storyline felt stalled or forgotten until I was there.

The single player narrative is going to make you want to see it through, but I don’t see them selling the movie rights.

Arizona Sunshine is not trying to be Blue Effect or The Brookhaven Experiment, but it certainly has its jump-scare moments. I can’t tell you how many times I forgot to look around for cracks and nooks that zombies could pour out of and all of the sudden I turn and BAM!!, there is a zombie eating my face.

The Mine section of the game where light is a commodity was one of the most terror-inducing parts of the game, as the flashlight limits what you can hold and basically gives you a single weapon to shoot with while you scan the empty space for more buggers shambling your way. This was great fun, I definitely will try more jump-scare games now, as I previously had a self-imposed embargo on them. 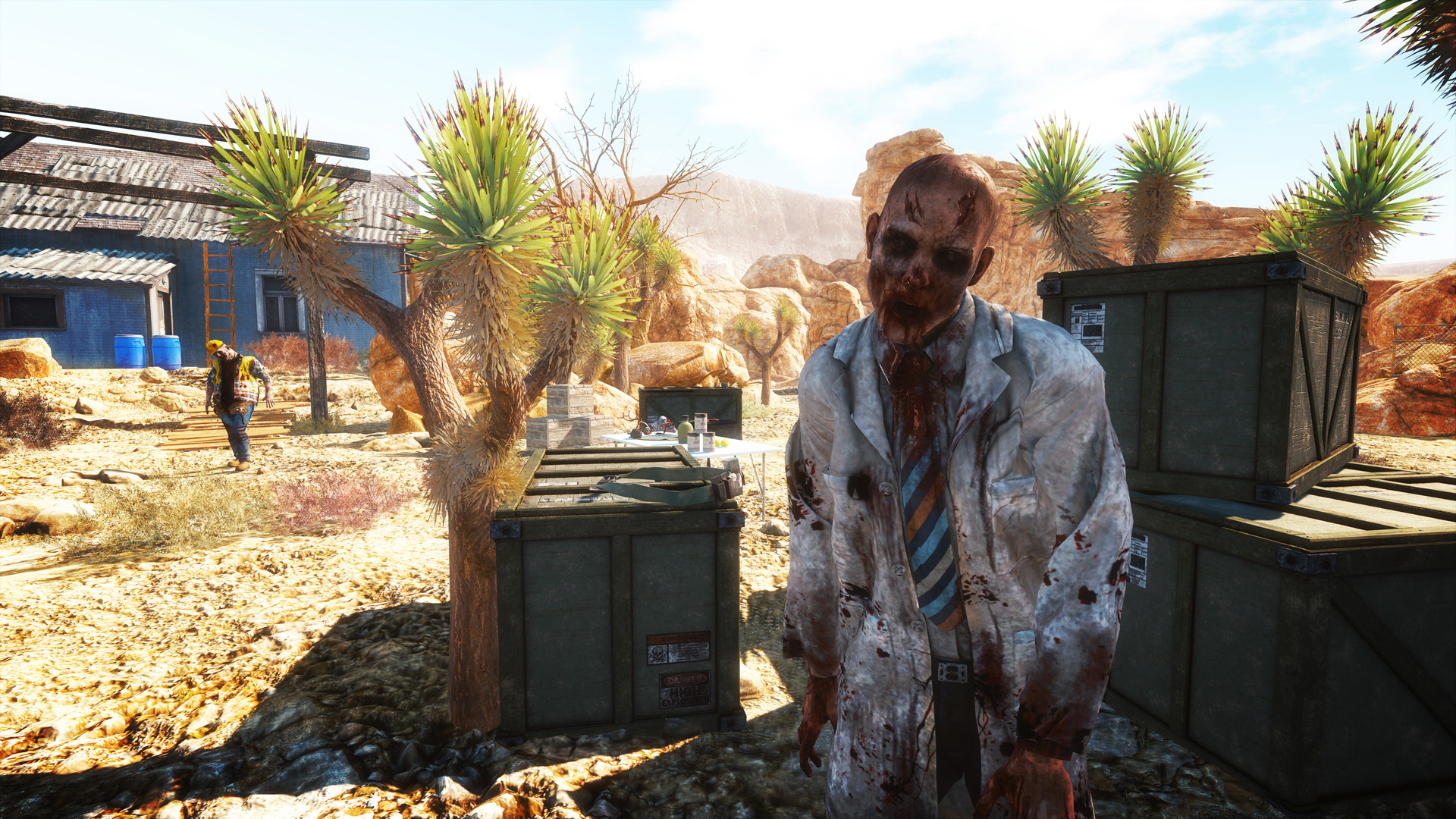 While Arizona Sunshine is polished, for the most part, some rusty shards are hidden just under the surface, waiting to stab you in your soft vulnerable bits. The very first thing that I noticed when I loaded the game was that not everything is able to be grabbed and moved, like Job Simulator for instance. Things that can be grabbed generally have a circle floating near them, but not always, and they tend to snap to your hand from an unnatural distance, which leads to some immersion loss.

The first true glitch for me was when the game transitioned from the first scene at the first gate, it simply left me in the dark, never loading anything. However, I rebooted and that didn’t happen again, so far.

The next glitch happened when I was in the first building, where I noticed that if I got close to the walls and reached for something, the whole game world would snap and stick to my hand and move around my hand’s location. This was very unpleasant and nausea-inducing.

The next isn’t so much a glitch as a poor choice… The Chaperone system has a calculated distance defined by the developer to prevent people from injuring themselves or damaging their homes/property. For the most part, I haven’t had any games really mess this up, until this one. I couldn’t move in any direction more than a foot before the Chaperone was in my face and ruining the experience. I had to use the developer settings to disable the Chaperone to make the game playable.

And the final Glitch was the worst one. I got stuck in the game world in the Cave/Mine for a good long time, as a zombie was stuck underneath me on a shorter section of a bridge, and the game wouldn’t allow me to teleport to the next section of the bridge below. I also couldn’t shoot the zombie as the “ground” (tracks) were blocking his head, the bullet impacts floated in the air above his head, which I could see.

These were few and uncommon, so all in all, I would only attribute a small discount on the overall quality of the game. 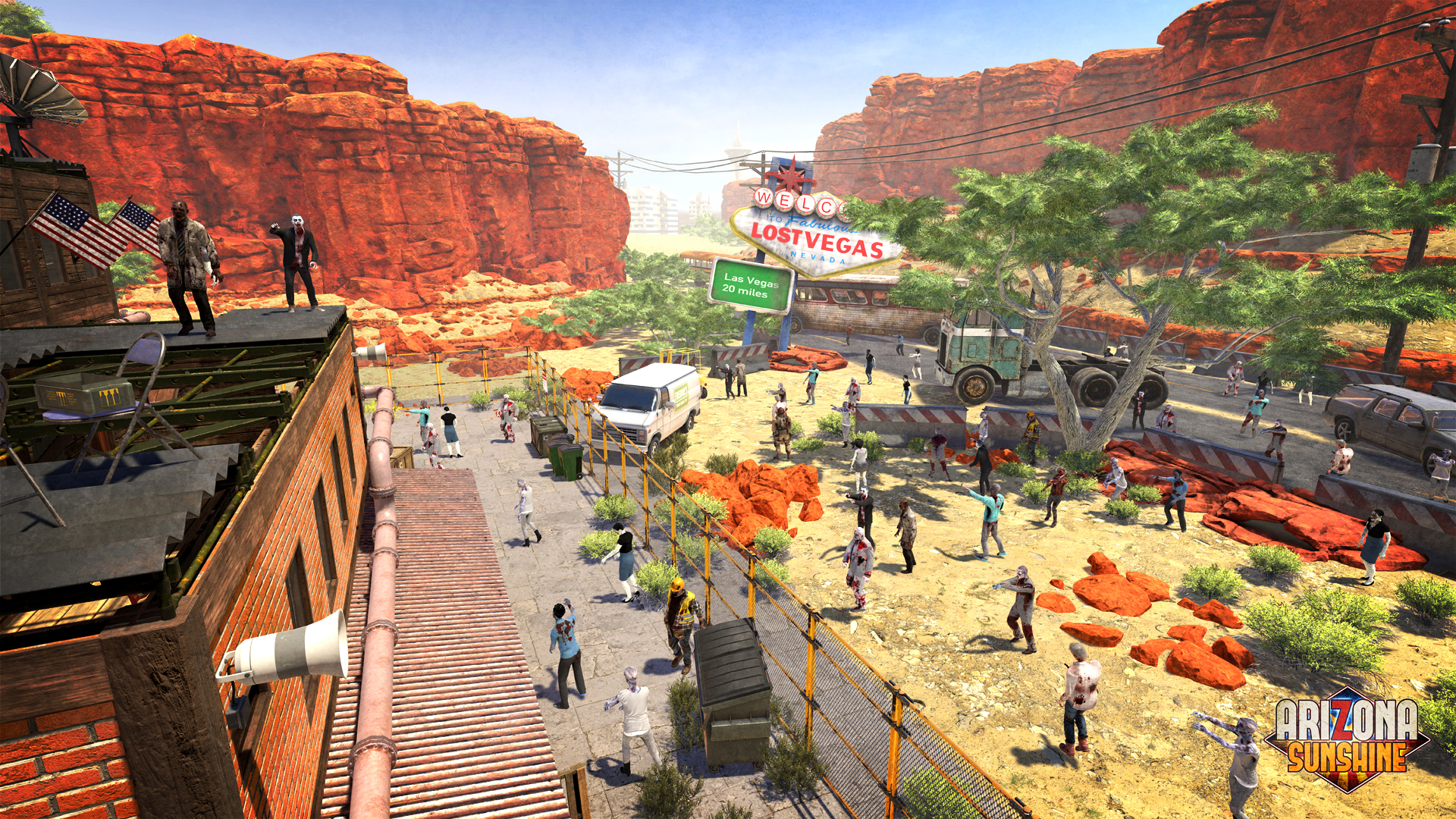 Graphics – “You found me beautiful once… Honey, you got reeeal ugly!”

I played a very early version of the game a few years ago, and I have to say the developer has really done a great job here. The textures are sharp and clean, they look natural for the most part, at least on the majority of the game assets. The high polygon models also look great, and the world feels fleshed out.

The Room scale VR is done really well, with the calibration for the height of the player being a nice touch, even though its effectiveness is offset by the irregularities in the modeling. While zombies feel smaller than a normal person should, thumbtacks and desk drawers are enormous, but generally speaking, the rest of the game’s objects feel correctly proportioned.

The animations are well made and interesting, although they don’t have a lot of variety. The items in the world do not have the “real world material” feel, it all kind of has a plasticky look, kind of dull and flat, but it works well here, as the world feels dreary and worn, without being depressing. This is also offset by the choice of the titular location. Being in a bright and sunny location like Arizona keeps the depression level low. I also liked the choice of buildings, like an old saloon, and a mine with amusement park-style attractions, as these locations were “FUN” placings in a game with a dark premise.

The lighting system in the game is one of the best parts, especially if you enable HDR, as the sun rays in dark areas that beam through the cracks glow, and the flashlight in the cave brings me back to the Doom 3 days. A lot of love went into the visuals.

My major visual complaints are:
• Skeletal animations: Zombies “Fold up” inside themselves from the bad rag-doll physics
• Gun animations: 6-shooter chamber stuck open until I reloaded the game
• Scaling Issues: Zombies were too small, yet thumbtacks & desk drawers are huge 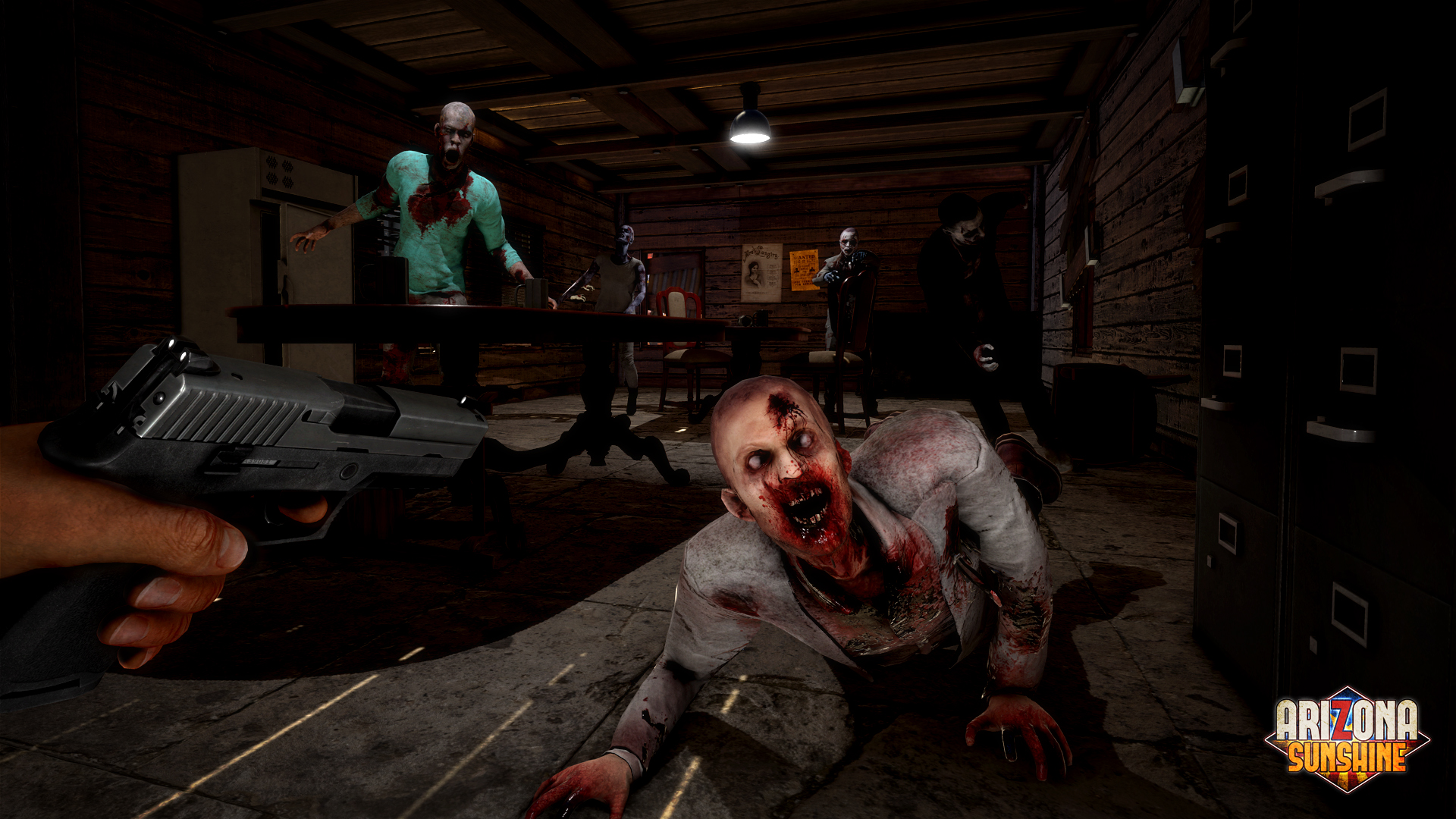 The Dead Man DLC is more of the same, which isn’t necessarily a bad thing. The Dev’s have extended the main story-line by adding a 2-3 hours prequel to the main campaign story. This has the same level of polish as the main story and didn’t feel tacked on, or cash-grabby. The dual hand weapons are pretty cool, although your arms may get tired way quicker than in the single player main story. 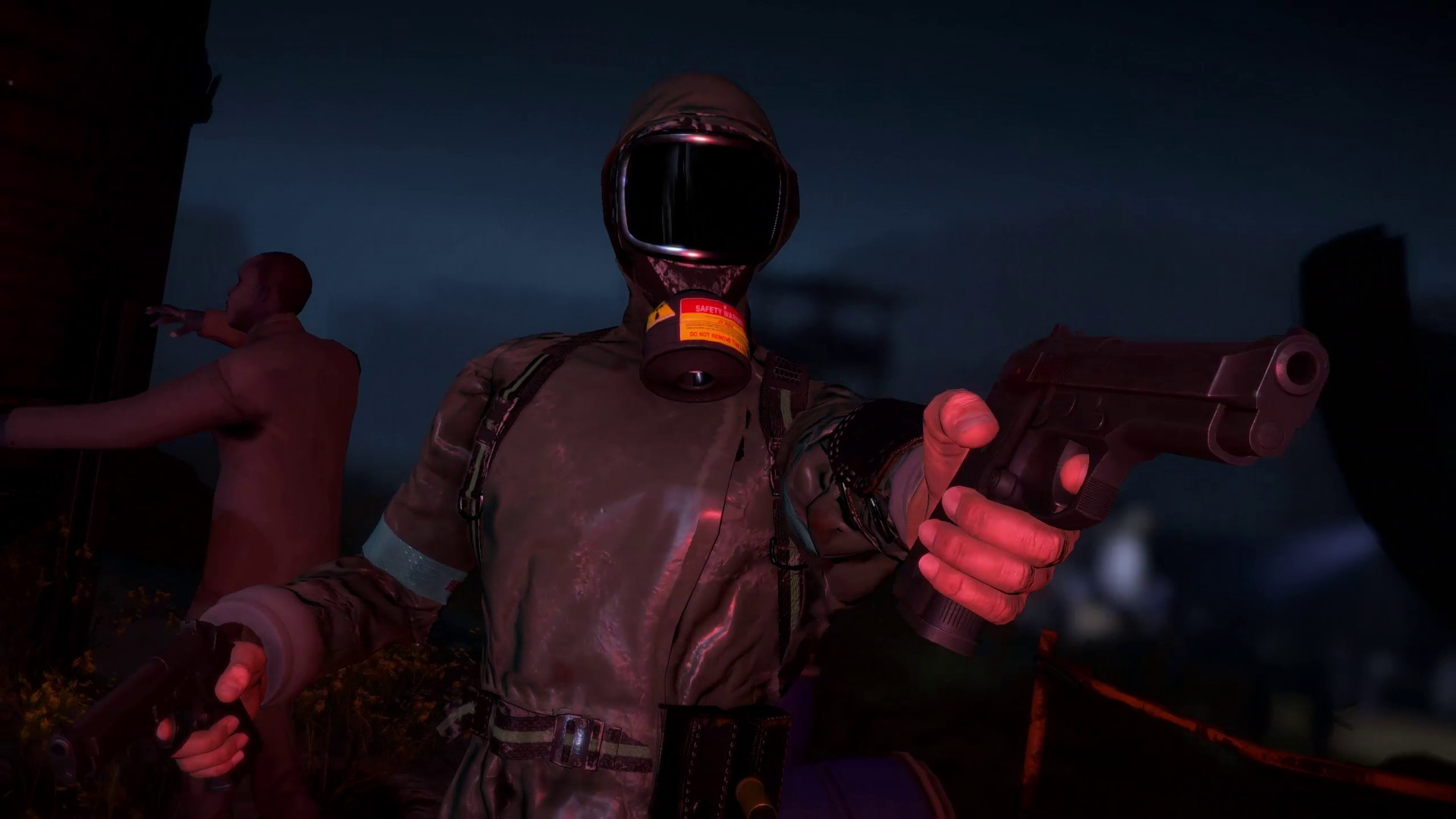 I do not like, nor do I often try multiplayer, I think that the competitive nature and general lack of respect for others experience / invested cost is considered by the other players. With that said, I did enjoy the DLC’s multiplayer more than I would have thought. It’s a little tough to gauge the value of this for someone else, but if multiplayer is your deal, the game now has it incorporated. 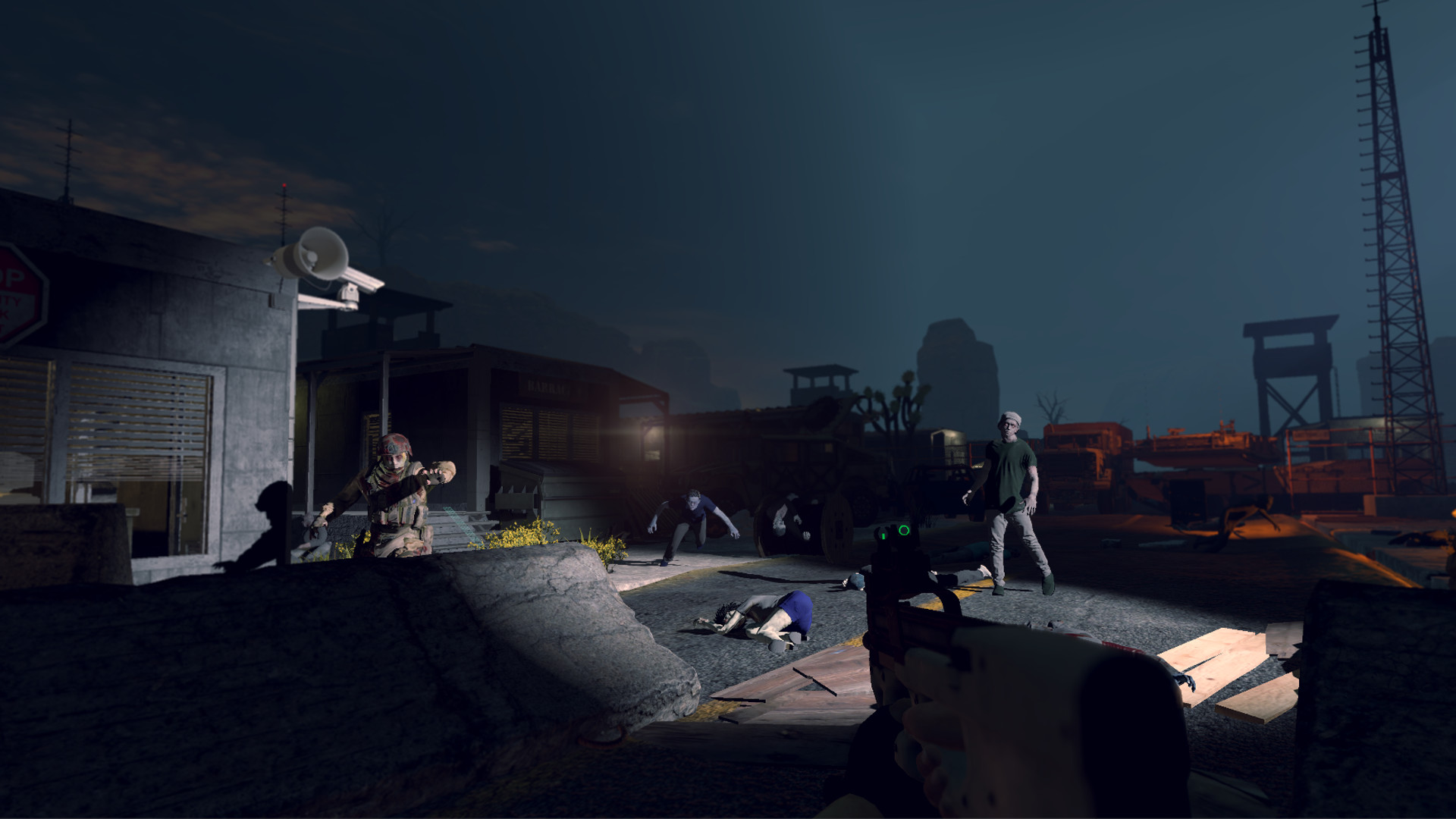 The Bad:
• Difficulty ramps up during Hordes | Swarms
• Reloading a save with less ammo that you can win with before a big wave
• World scale is off by a bit in both directions
• Slightly repetitive cycle of “Find key, kill swarm, find gun, find new locked door”

Zombie shooters are a staple on most gaming hardware, and The HTC Vive & Oculus Rift are no different. Many have tried, but few have delivered a game with an excellent narrative, and interesting locations like Arizona Sunshine. While I would not pay the full retail + the cost of the DLC, I can say that the moment it goes on sale, it is a must-have for VR gamers.

Thanks for reading, I hope you enjoyed the review.
Did you know all the movie titles for the quotes referenced in my headers?