Is de Blob 2 an aging relic of a bygone era or a new coat of paint on a classic game? Lets find out…

de Blob 2 was announced on 29 May 2010, a couple of weeks before E3 2010. Playable Demos were available on the floor at E3 in the form of the Wii and DS. From there it didn’t take long for the game’s initial release on February 22, 2011 and eventually other studios picked the game up and ported it to several additional platforms. In total de Blob 2 saw a release on the Wii, Xbox 360, PlayStation 3, Nintendo DS, Nintendo Switch, PlayStation 4, Xbox One, and Steam. 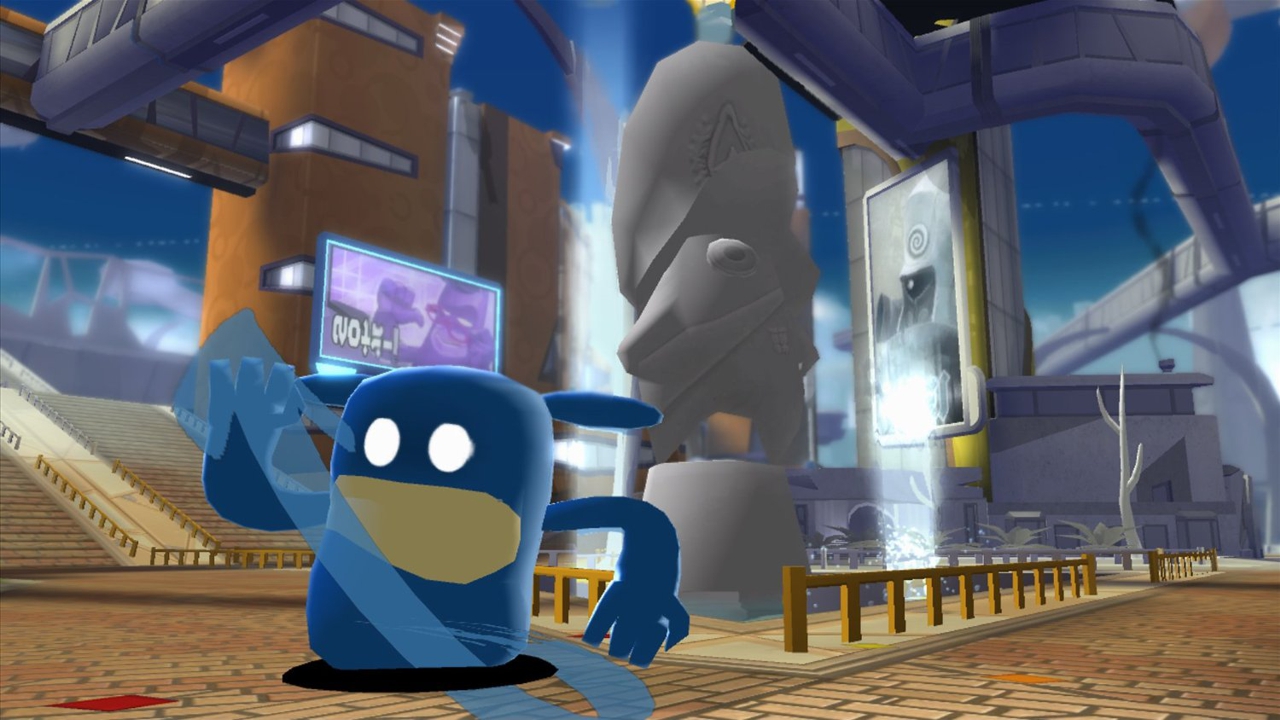 Overview – Get Out The Paint Roller…

Platformers are a dime a dozen on all Gaming systems, but can definitely range wildly in terms of quality and love-ability. They are effectively what propelled gaming from the hardcore to the Home. Case in point, Super Mario Bros. was for many gamers the first real console game they played and is still selling consoles (NES Classic). Its simple and easy to learn mechanics backed by unique and fun hooks or game-play elements are what separate the classics from the terrible knock offs.

de Blob 2 is definitely not revolutionary, but it has its hook; Fun and lovable characters, bright colors, silly cut-scenes, and a paint by numbers style progression system. However, if I had to select a part of the game that really caught me off guard, and I have to give John Guscott a lot of credit, the sound track for De Blob 2 is stellar. I would go as far to say the soundtrack has as much character as De Blob himself. 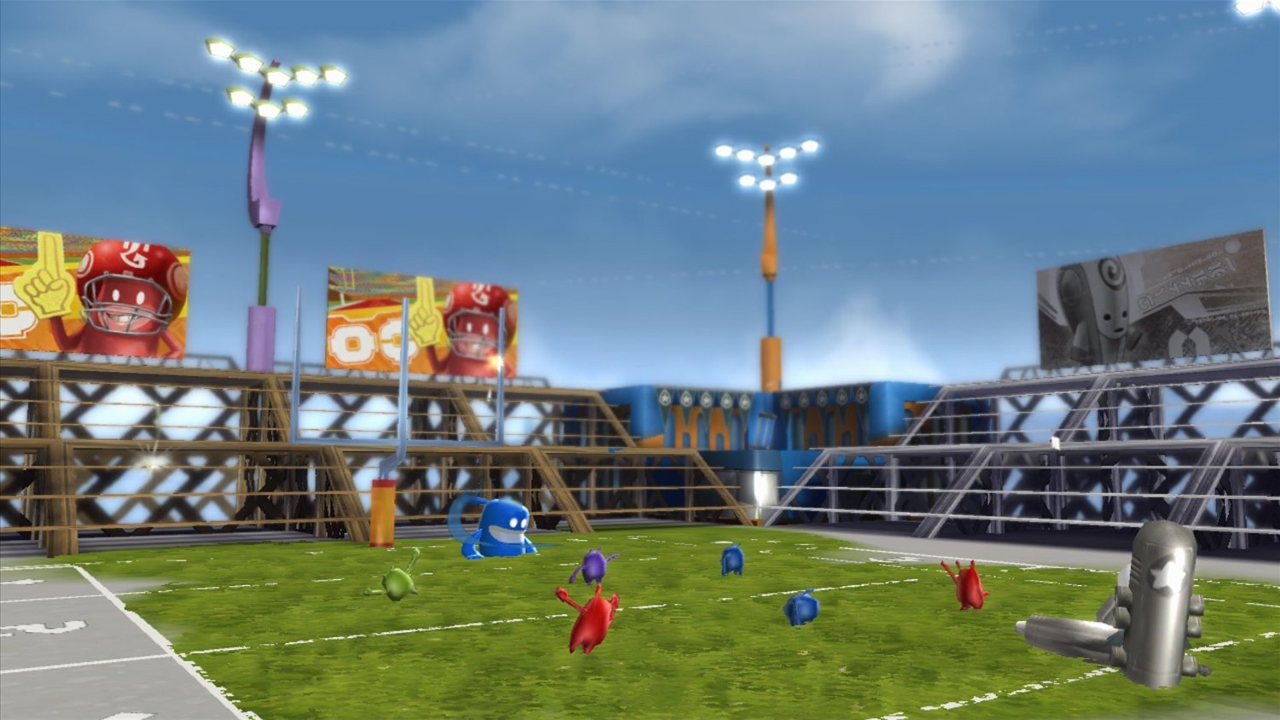 Simplistic Gameplay is not for everyone. If your looking for Dark Souls levels of depth and difficulty, run away screaming… it’s fine we’ll wait. OK, if you are still here then you’re like me, and sometimes you prefer something you can play after a long day at work, ya know… crunching IRS tax numbers or calculating the trajectory of meteors in the Ort cloud to predict the fate of mankind.

Who needs to come home and stress themselves out even more by playing a video game, amirite? Well you won’t be twisting any controllers in half or putting one through a TV that’s for sure, this is a fairly mellow experience. The tone, speed, soundtrack, and overall feel of the game is one of familiarity and comfort.

de Blob 2 can be picked up in 30 seconds and then, to keep your interest, they slowly tack on additional elements to refine the gameplay and try to keep it fresh. The premise of the title is to roll your adorable titular Blob over the top of objects in the game world that the antagonist has drained the color out of. This includes buildings, trees, and even the Denizens of the world.

As far as expanding gameplay; as you progress there are pickups like “Styles” that will change the paint pattern and they stack so you get a more customized look as you progress. Eventually you can expend paint points to break barriers and perform other movement type feats as well. All the new additional elements do make for a more well rounded experience, but never unbalance the gameplay or detract from the overall style. 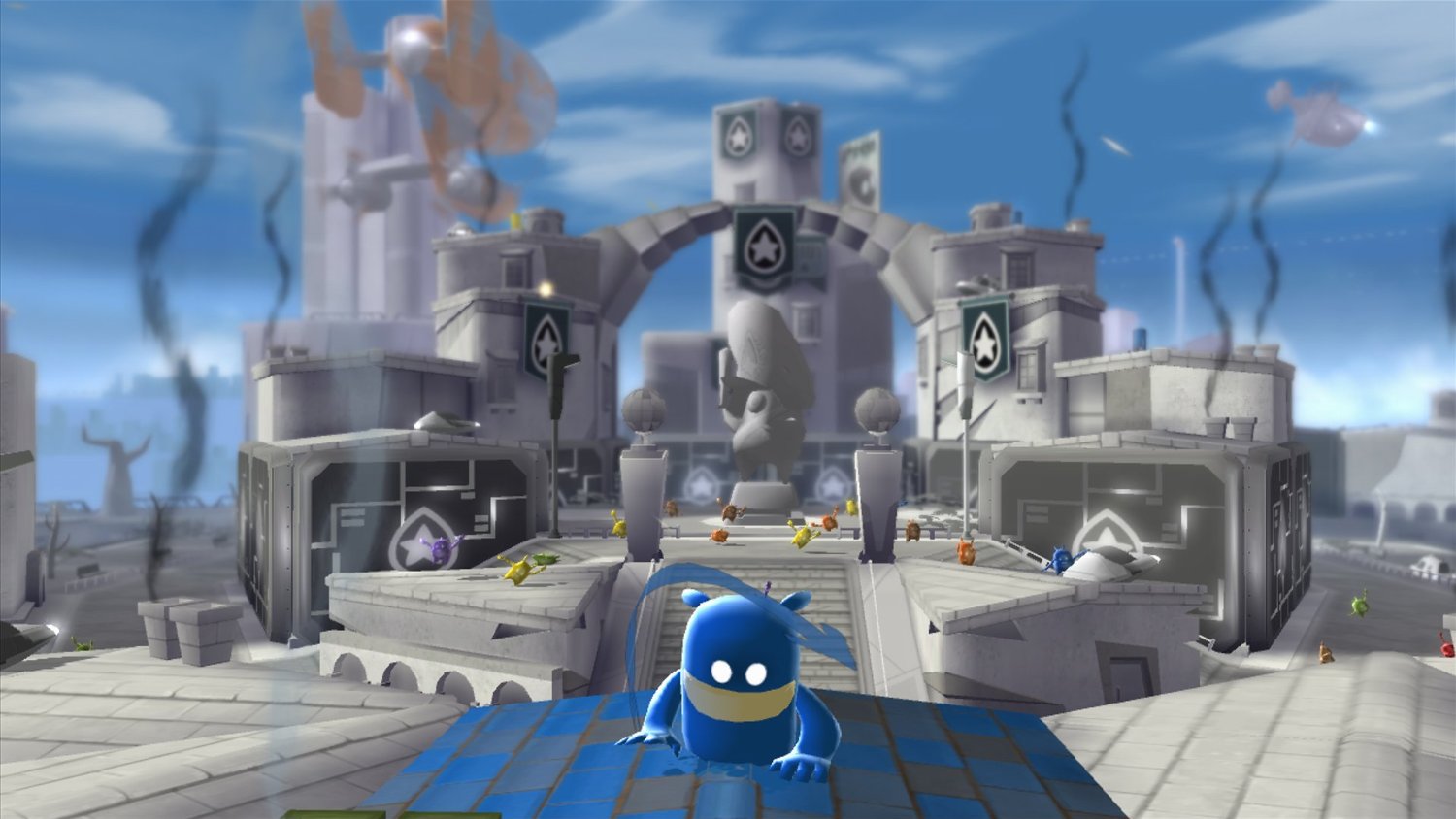 When it comes to controls, if you have played the original de Blob, the Wii’s motion controls and speaker on the wiimote did have a bit of extra wiggle room in the unique department versus say a Dualshock 4.

While the Controls are not bad per se, the camera can be sluggish, especially in the horizontal direction. The main Protagonist already has a sluggish and heavy feel to him, this coupled with the slow camera movement can lead to fights with the camera rather than the enemies as you try to swing them into view.

You start out with a button for your compass and another for jump, the shoulder buttons lock you on to objects; as stated before… nothing overly complex; you can pretty much walk up on someone else’s game after the tutorials and still get the controls figured out in under a minute. 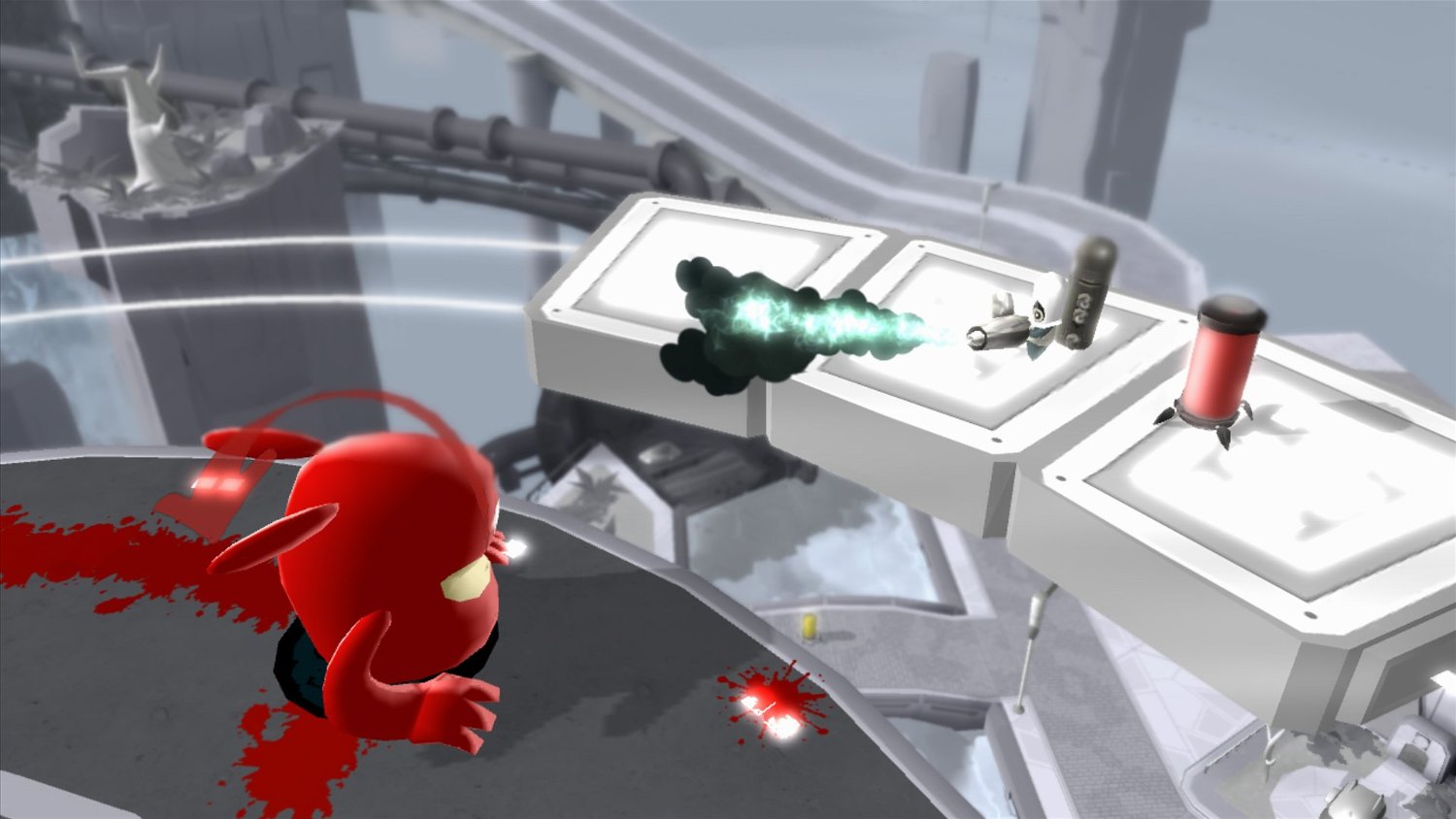 Graphics – A Mixed Can of Paint

Complex high poly characters and all the wiz-bang filters and special effects do not a great game make. but lets be honest the XBox One X and PS4 Pro wouldn’t exist if people didn’t care about the Graphics in games. On a midrange PC this game will run fine and looks about as you would expect for a port of a xbox360 era title. Nothing to write home about, and you will not need the latest Geforce GTX 9080Ti Turbo II to run it.

Not a deal breaker or game changer, but I did see minor frame drop and some tearing in the Playstation 4 (non-Pro) Console version. Not enough to really detract from game play or cause me to worry about the games performance, however, it was worth mentioning for those looking to buy on consoles. The bright colors and cheerful mood overall puts it in the Super Mario Sunshine tier of graphics, obviously with a bump in resolution, and I really like the overall design choice for the character art and look of the world. 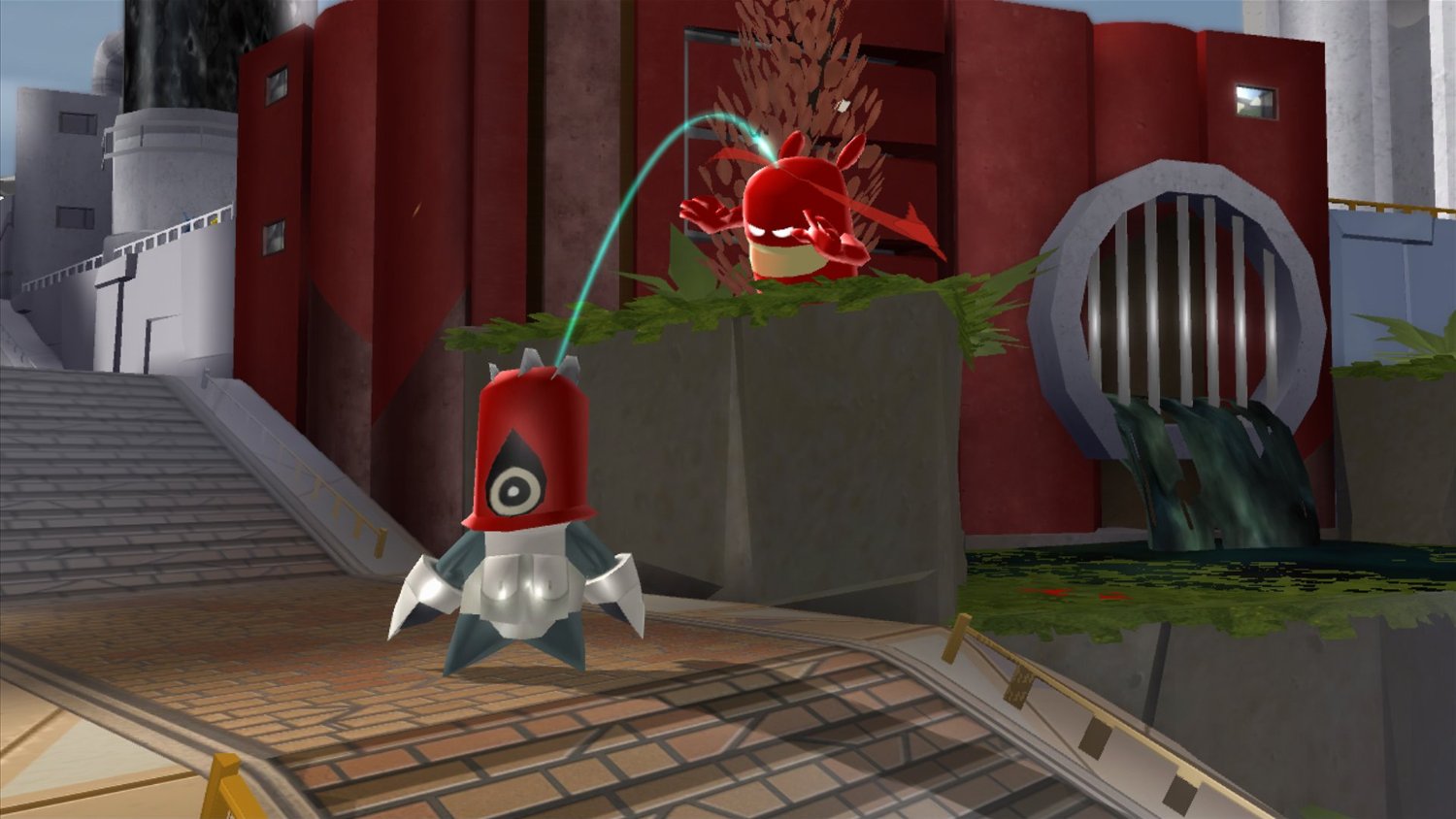 Verdict – A Tiny Chip in the Paint

Weaknesses:
Over all de Blob 2 is a fun game with a few tiny chips in the paint. The controls and repetitive gameplay detract the most from a game with a lot of personality.

The Meh:
The Story is only there to be there, A lot of repeated tasks and enemy types, multiplayer seems tacked on, difficulty level (or lack there of) can work either against or for the game depending on you.

Overall:
I would have given the game a Save if the Camera wasn’t so bad and the framerate hadn’t dropped the few times I noticed it. If you can overlook those nags yourself then pick this game up. You will have fun slappin paint on all dem tings while jamming out to some great tunes.

Additional Notes:
At the time of writing, the Steam Summer Sale is in full swing and you can buy the game at a 50% discount, at that price it will provide you with plenty to do for the weekend and well worth the slight ding to the wallet. (IMHO)