While the party itself is pretty lame, House Party, the game, successfully pushes the boundaries of Steam adult gaming. It’s rough around the edges, but still worth a look.

In House Party, you play an unnamed man invited to the titular house party by your friend, Derek. Derek is friends (and maybe more?) with the host, Madison, and an all-round nice guy who’s had a bit of bad luck lately. You arrive at the party and do the rounds, finding a handful of Madison’s attractive female friends as well as three other male invitees: Derek; Madison’s cousin Patrick, already drunk and offensive; and the rather aggressive anti-alcohol campaigner, Frank, who has locked away all of the alcohol he can find and is sitting guard to make sure no one recovers it.

The aim of the game is seduction, plain and simple: talk your way into bed with as many of the ladies as you can and then bonk them silly!

Another Warning: This Video Gets Explicit

Here onwards is to be especially avoided 😉

The setting for the game is a house party and, to be blunt, it has to be one of the most boring parties I’ve ever seen, especially considering the attractiveness of most of the attendees! 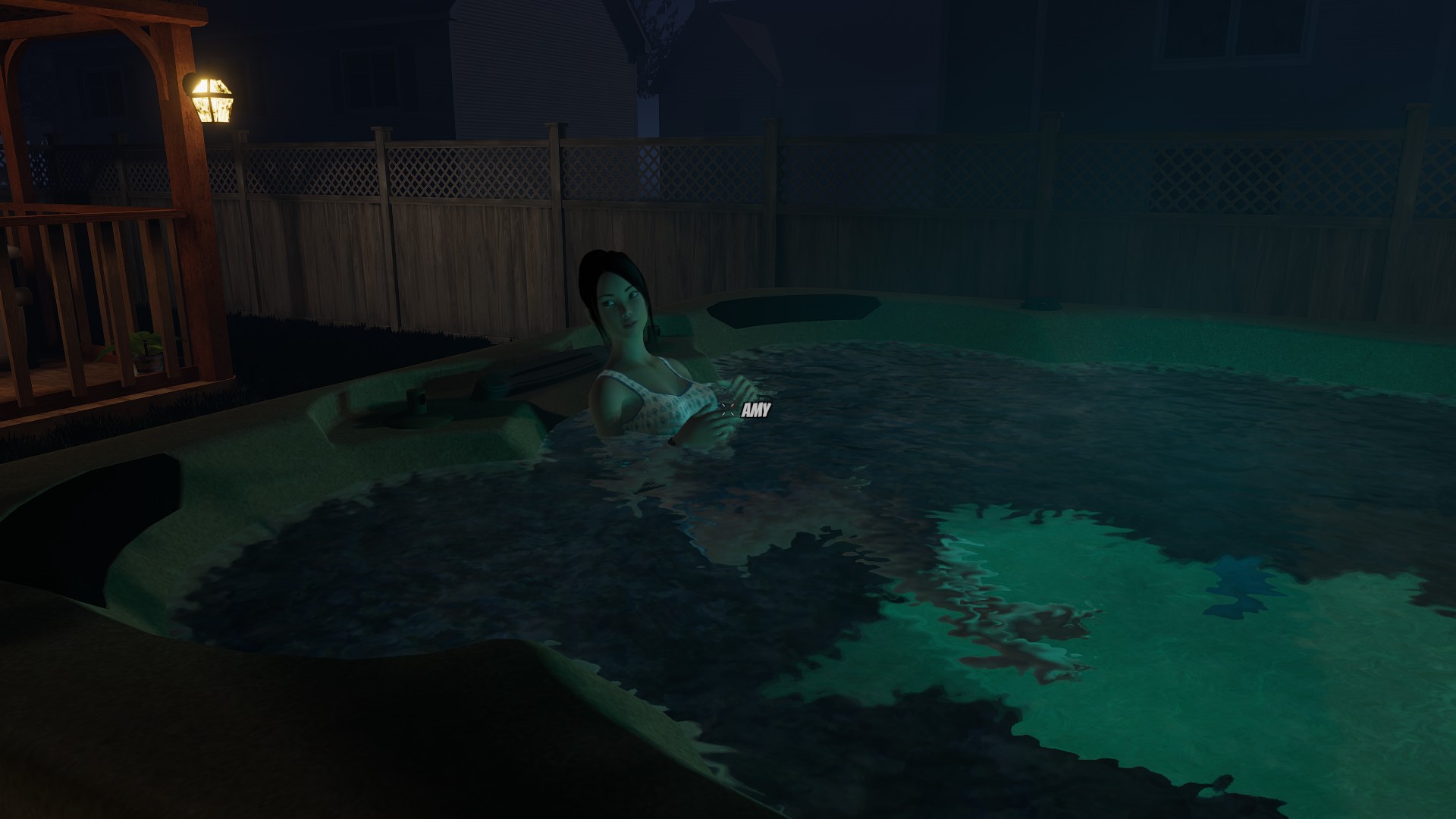 The whole game is played on a single and relatively small suburban block, with a few outdoor areas, and a house with a dozen or so rooms. The play area is realised well enough, with reasonable models and some nice lighting effects, but everything outside of it looks very drab and basic; looking through any of the boundary fences lowers the suspension of disbelief considerably.

The focus of the game is on the female characters, though, and mostly they are rather nice looking indeed. Models are relatively well detailed and textured attractively, with some really convincing animations — right alongside some downright terrible ones! There’s full nudity, but some of the models look decidedly weird in some poses, and a few more polygons here and there wouldn’t have gone amiss. Cloth physics are nicely done, as is the jiggle, of which you’ll see quite a bit. 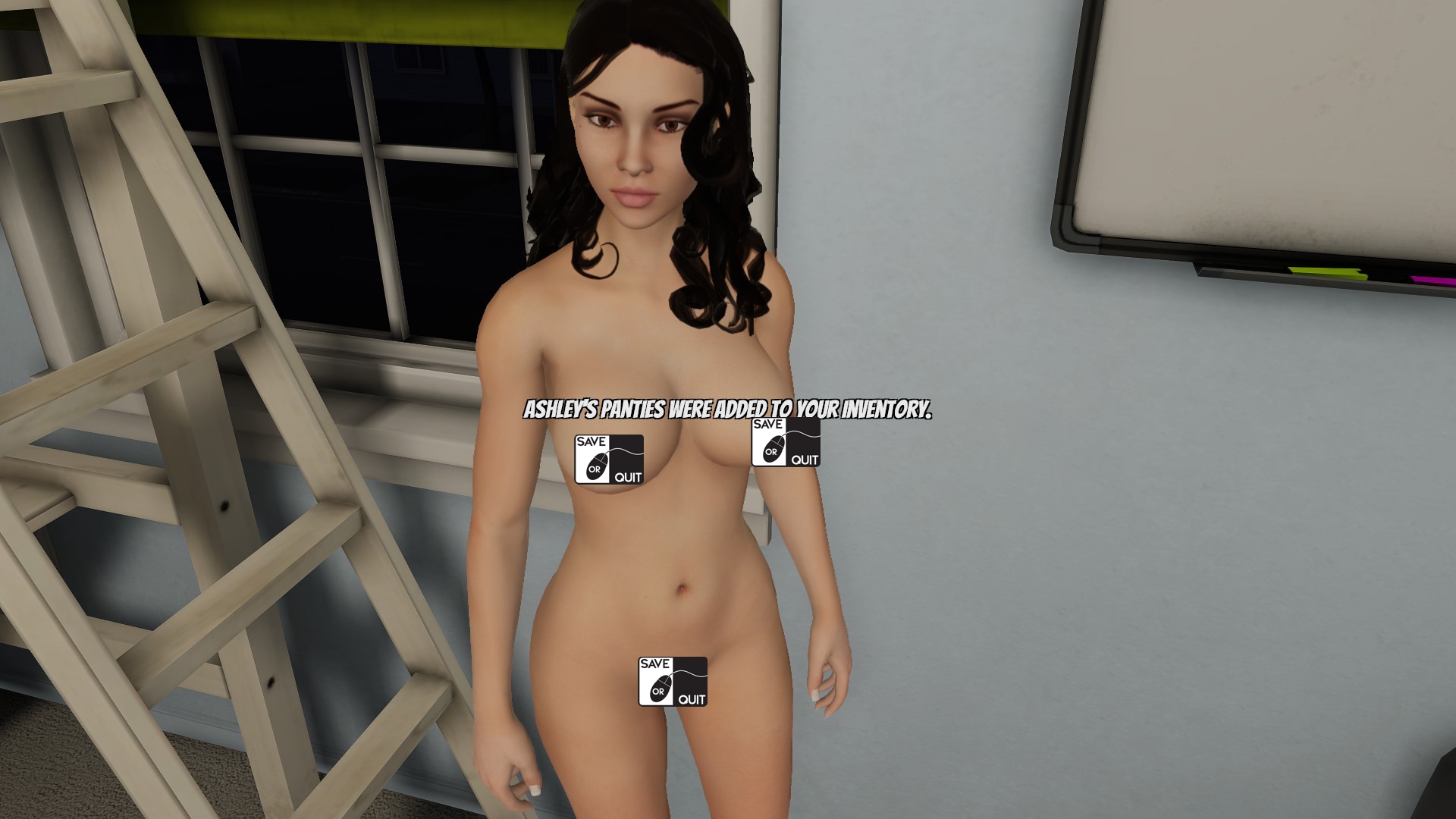 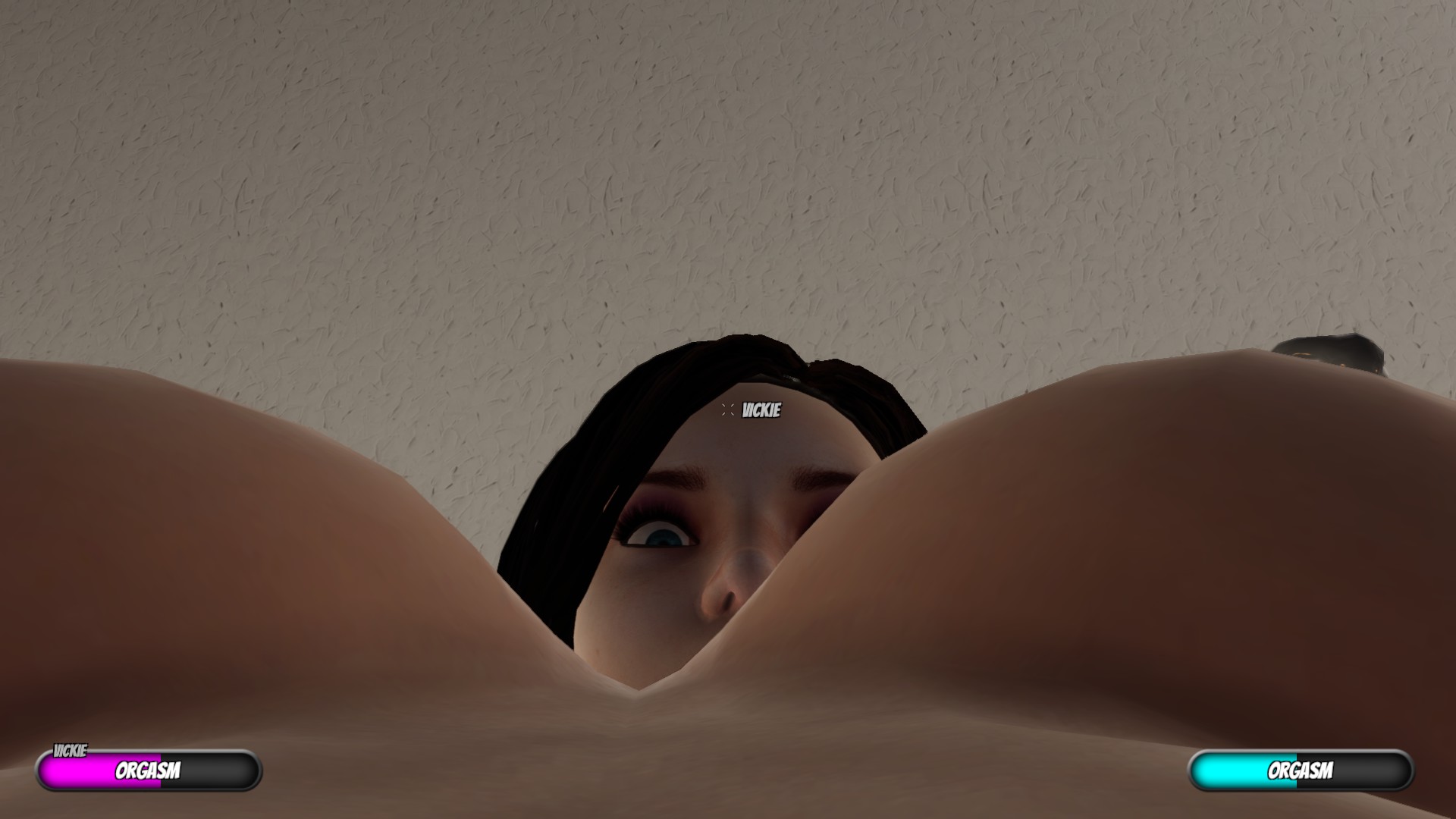 There are a few graphical bugs such as floating objects or people offset from their proper positions, characters going through social animations when no one else is around, and the weird “assume the position and hover” type action of the protagonist when you sit or lie down on the furniture. Clipping issues abound, too, with body parts moving in and out of other body parts and world objects; better collisions would make a world of difference! The game also freezes occasionally for a second or so in response to some events. 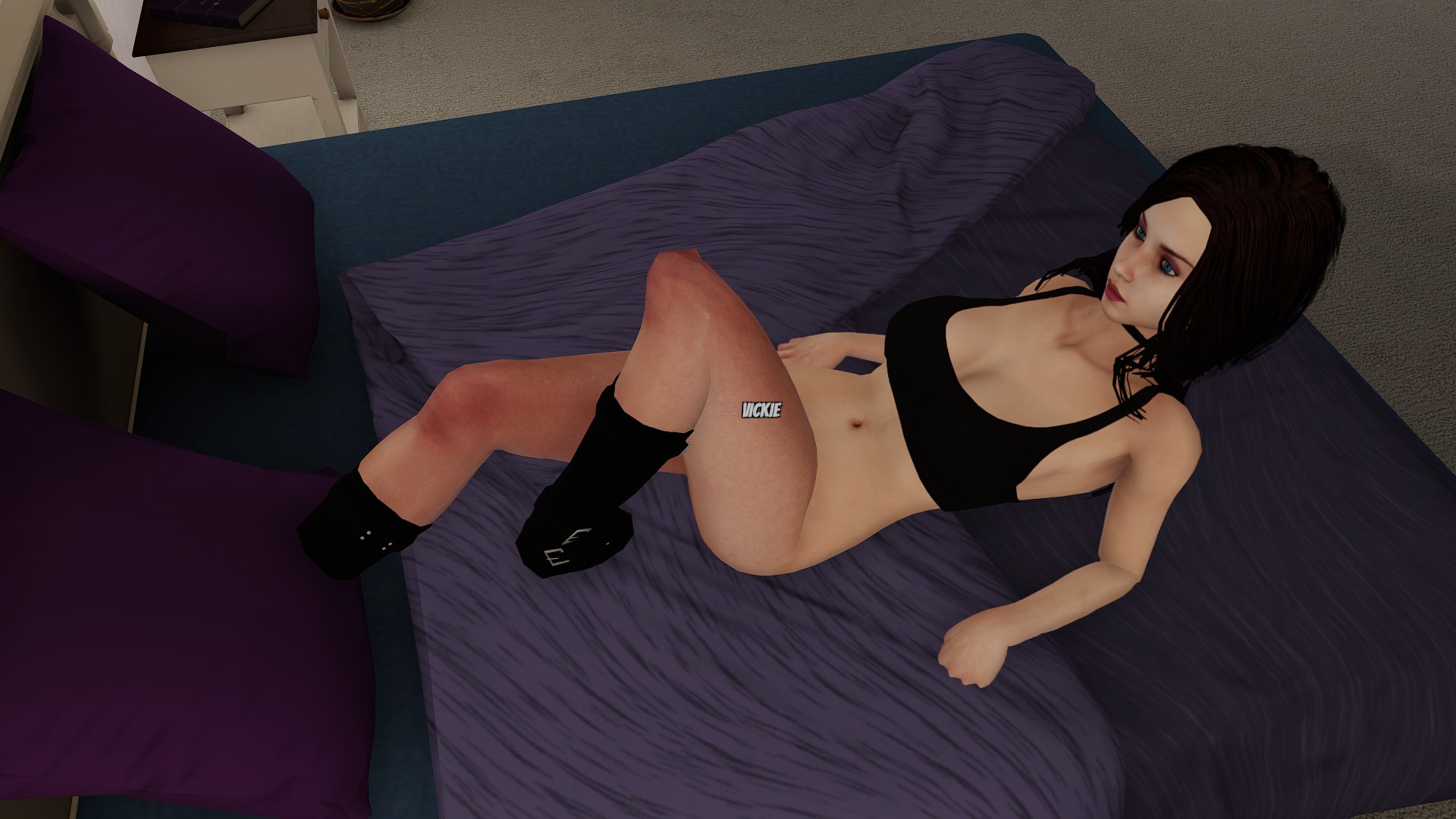 Game dialogue is fully voiced except for the protagonist, and it’s actually very well done. All of the voice actors sound professional. Music is extremely limited, especially considering the party setting, with only one very quiet and repetitive track playing throughout. Sound effects, too, are fairly limited, but good enough for the gameplay.

The script reads like something from Seth Rogen and Evan Goldberg: basically crassness for its own sake, and trying to be a bit too edgy. I didn’t find it very funny for the most part, with dialogue that seemed to fall a bit flat, but I expect it will appeal to many. I’ve had a couple of chuckles, at least. The grammar is even pretty good, though I did see a few mistakes. 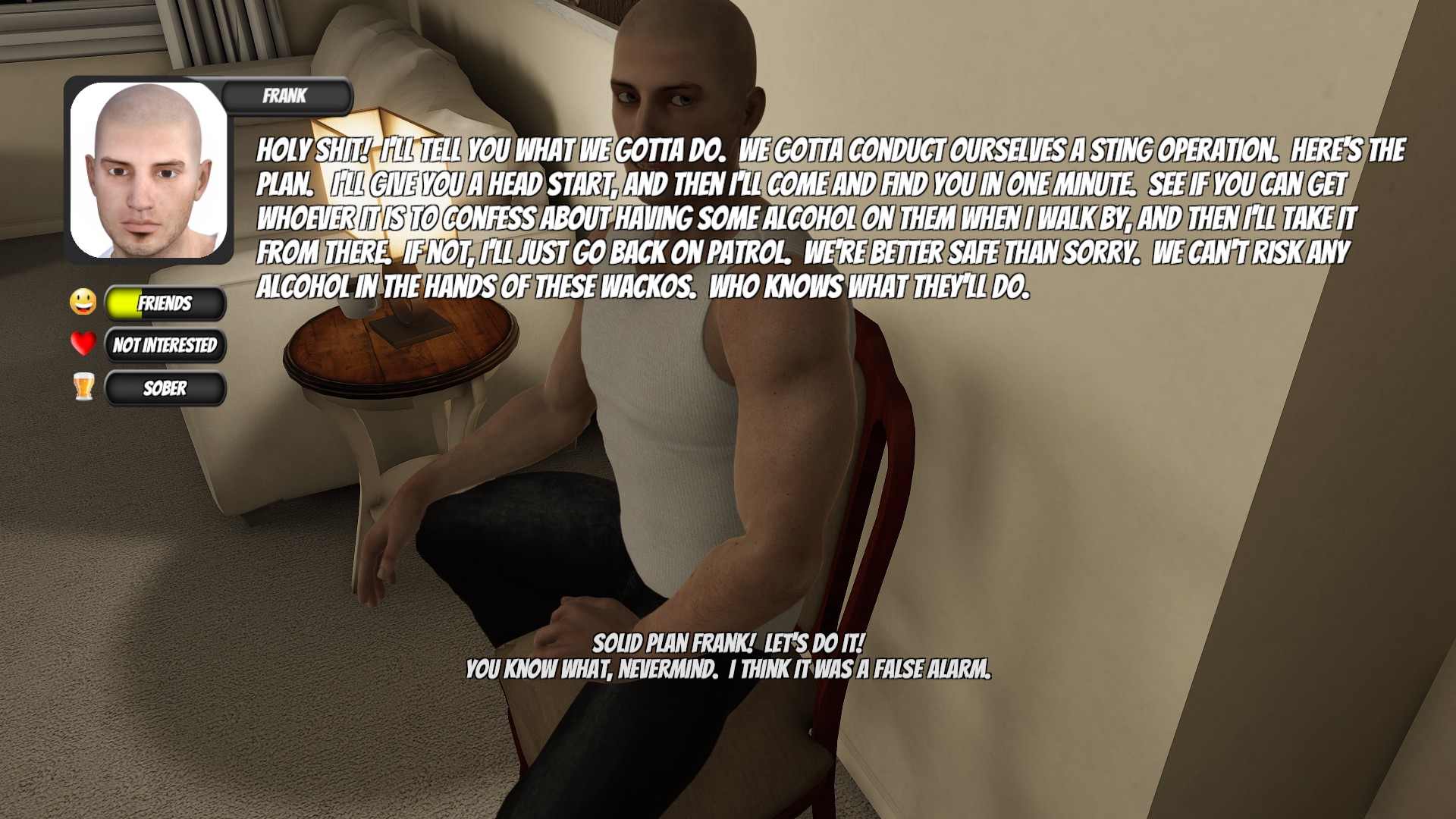 House Party is essentially a first-person point-and-click adventure game. You wander about the house with WASD, using the mouse to look about. Selecting people and objects brings up a radial menu from which you can select interactive actions that depend on the situation. Talking to people stops them in their tracks and initiates a conversation, from which you can choose one-line responses. The conversation interface also shows a person’s general opinion of you, as represented by the friend and lust meters, as well as a sobriety meter. 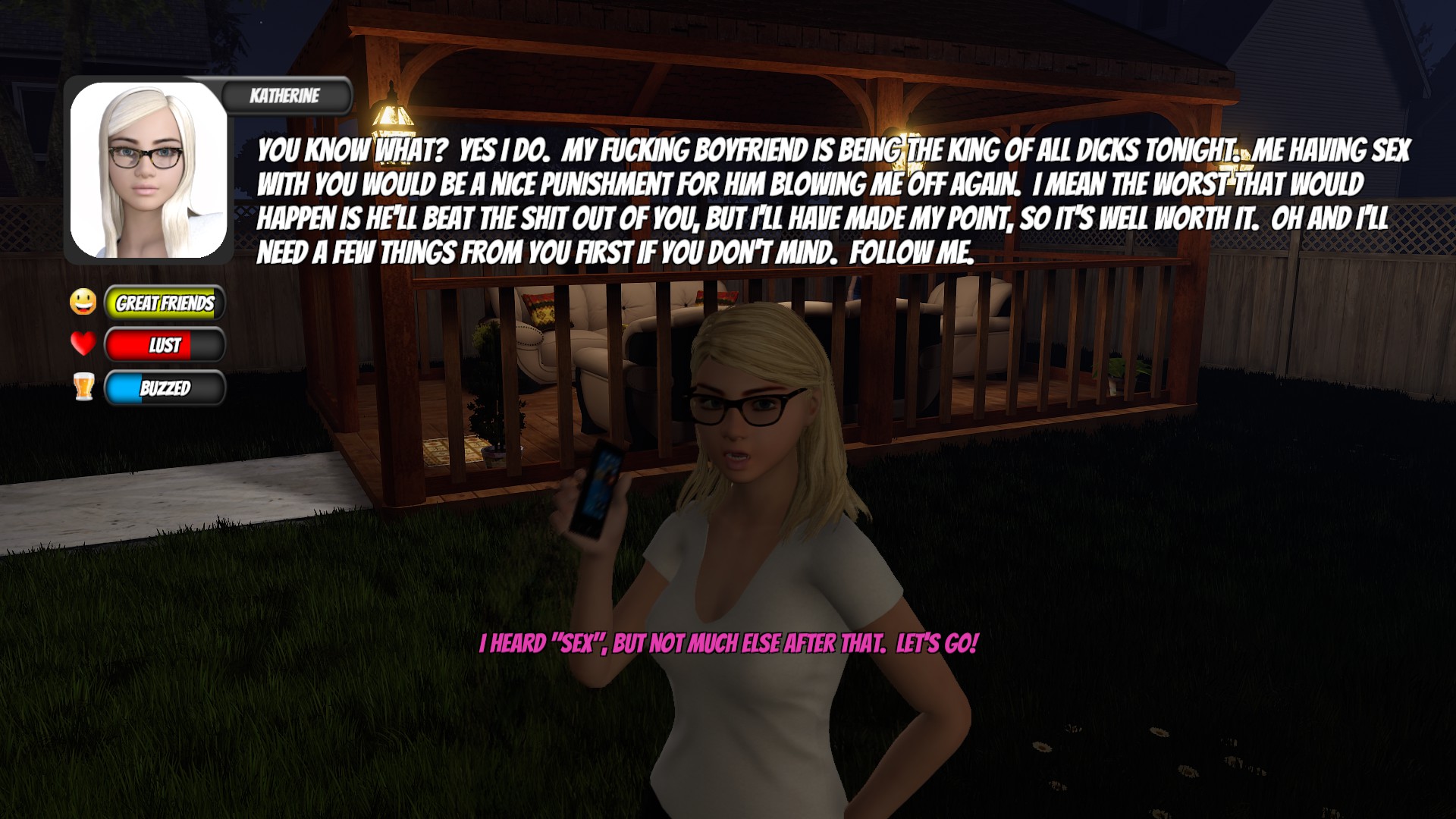 Gameplay involves talking to the other characters to learn what they want, then wandering the house in search of other characters or objects to satisfy the stated desires. Do this enough for most of the female characters at the party and you’ll have the opportunity to see them naked, and most likely sex them up. Woot!

I haven’t succeeded in seducing all of the characters yet, but from what I’ve seen so far, the sex scenes are handled using the same interface and are all pretty much the same: the same three sexual positions, poorly animated, sometimes together with an optional oral sex action beforehand. It’s a shame; with the characters available and the personalities they’ve been given, there’s scope for a lot more variation, but at the moment, at least, it all seems rather limited. 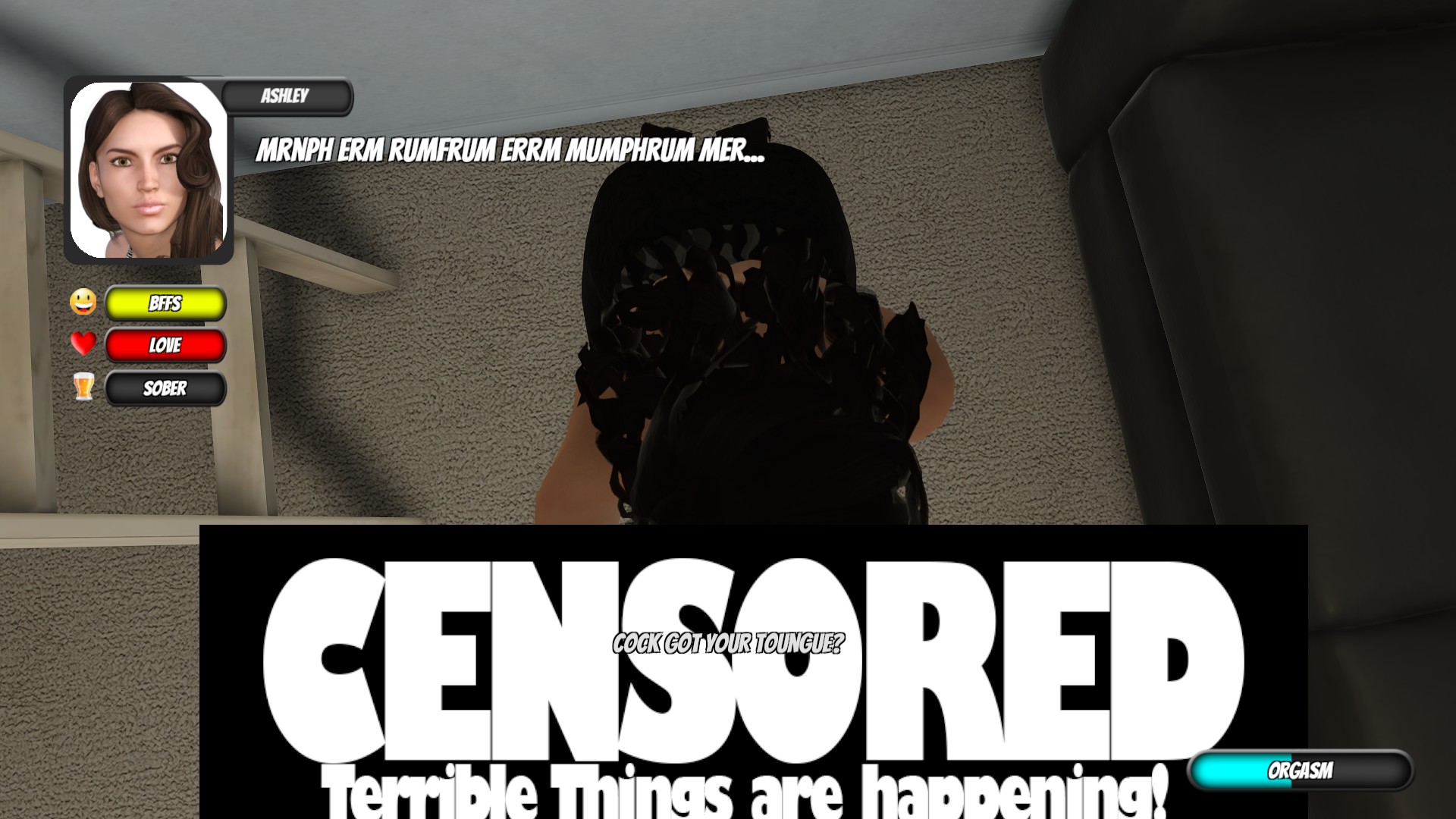 The loading screen hints suggest that experimentation is encouraged, but since the story plays through essentially the same each time, losing and having to restart is painful. And it’s very easy to lose by saying the wrong thing or picking up the wrong thing when particular people are nearby. 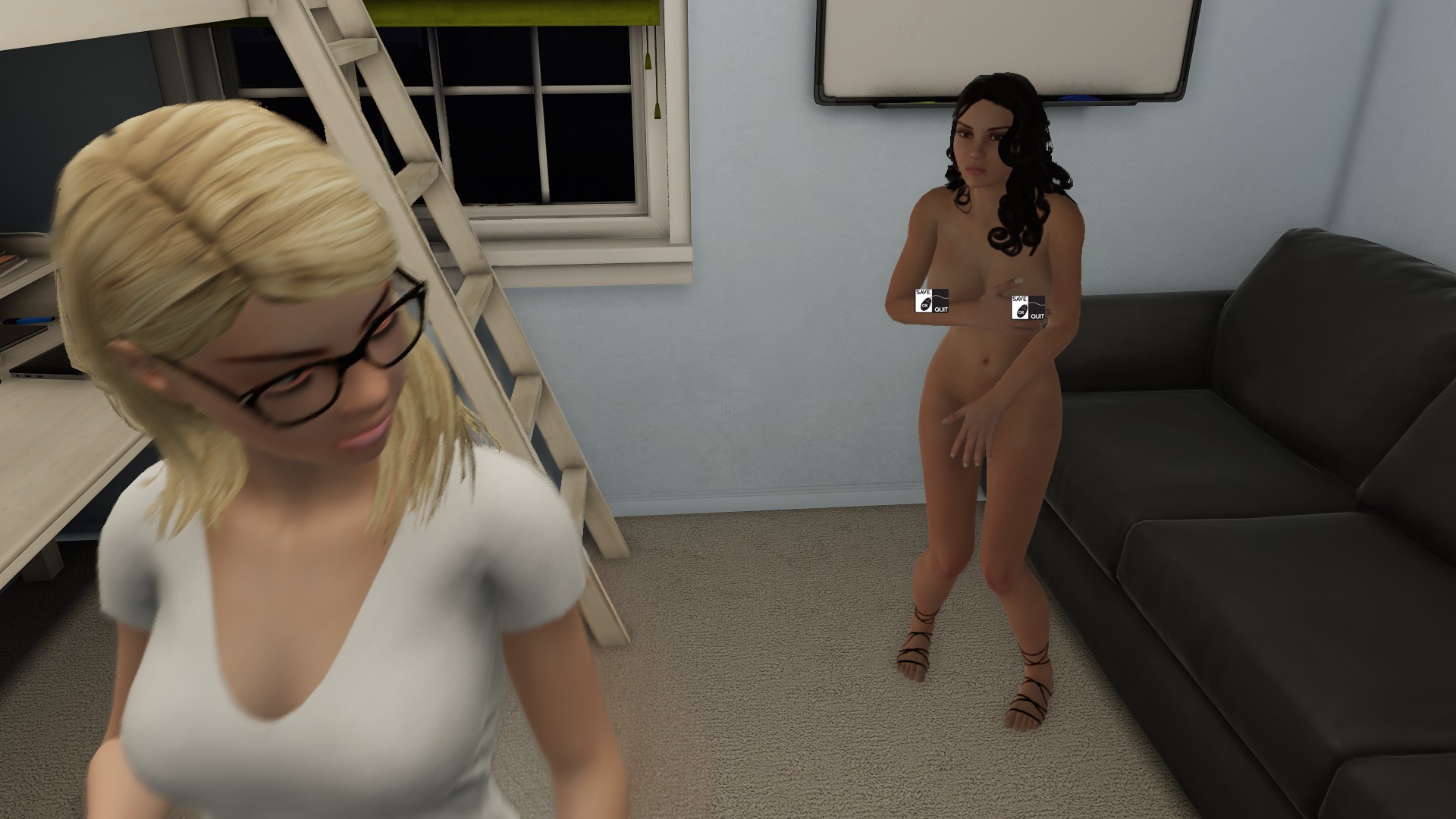 The game is also very buggy, which is to be expected to some degree in Early Access, but here it’s extremely frustrating. Trigger points are sometimes ignored or bypassed, putting a particular conversation item or action forever out of reach. I spent an hour wandering around looking for six beers; eventually I gave up and looked up a guide: one of them was simply missing! Some actions that should logically be possible only become available after another unrelated action has been performed. Some actions don’t have their intended effects, and other times you can save and reload and suddenly a previously unavailable action will become available to you.

As well as the main house party story, there are also two much shorter chapters, each with only one of the original cast of characters. These seem slightly better put together than the main story — at least, I didn’t encounter as many issues with them — but the effort that’s been put into the surroundings is minimal. They have the same objects in exactly the same positions; even some of the descriptions for inventory items that have been reused are wrong! 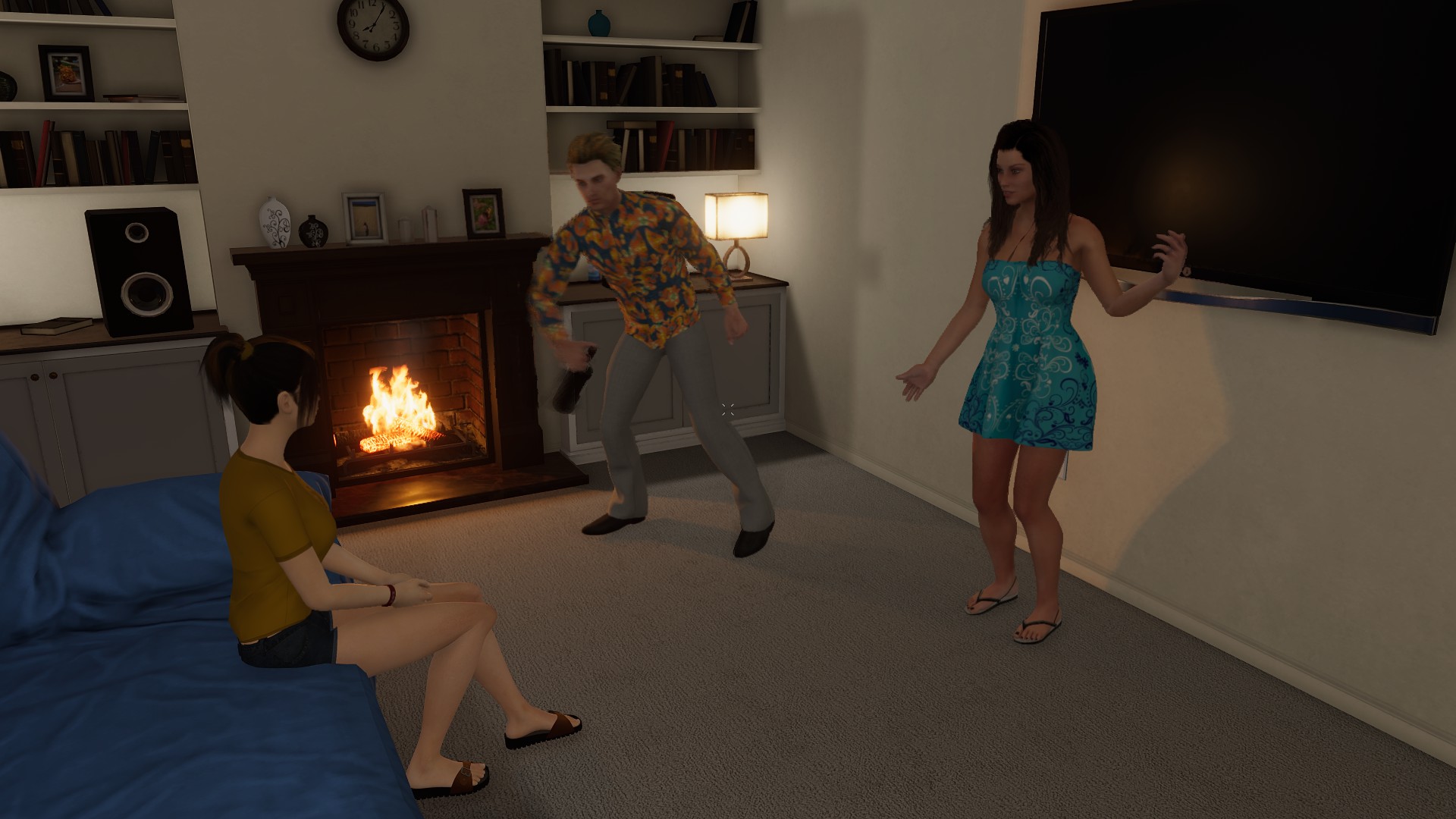 To me, House Party seems a bit like Leisure Suit Larry for the modern adult-oriented adventure game player. The clever humour, titillation, and old-style charm of those earlier games, though, are replaced with coarse language, a fuck-you attitude, full-on nudity, and 3D sex scenes, wonky as they may be. That’s not to say it’s bad, though it is very limited in scope, but it deserves a few (hash?) brownie points simply for pushing Steam’s nudity and sexual content boundaries, and having no qualms about doing it. It’s rather ironic, then, that it’s available for purchase in the country that banned Valkyrie Drive Bhikkhuni because it “uses sexuality as an incentive and reward!”

So, if you live in Australia, you’d better buy this quick before the Office of Film and Literature Classification finds it! If you live anywhere else then it’s probably worth a look, anyway. The asking price is a little steep for the game’s current bugs and limitations, but it’s mildly entertaining and has some good voice acting and attractive characters. Fingers crossed it gets a few more fixes before release, and some extra scenes wouldn’t go astray either.

“Press P to whip out your penis. No, really!”