Given the depth of its complex mechanics, there is no doubt the game is worth the developers low asking price. However, the current lack of substance in its core gameplay loop means most players are not going to find the game to be worth investing their time.

Battlefleet Engineer is a real-time strategy in which you take control of a custom fleet of ships to do battle against an opposing AI controlled fleet of ships (which you probably also designed). The game boasts the ability to simulate hundreds of ships in combat while tracking the individual damage states of their many component modules, all while using Newtonian physics to calculate the movement of each ship, factoring in its own individual mass, inertia, and functioning thruster locations. 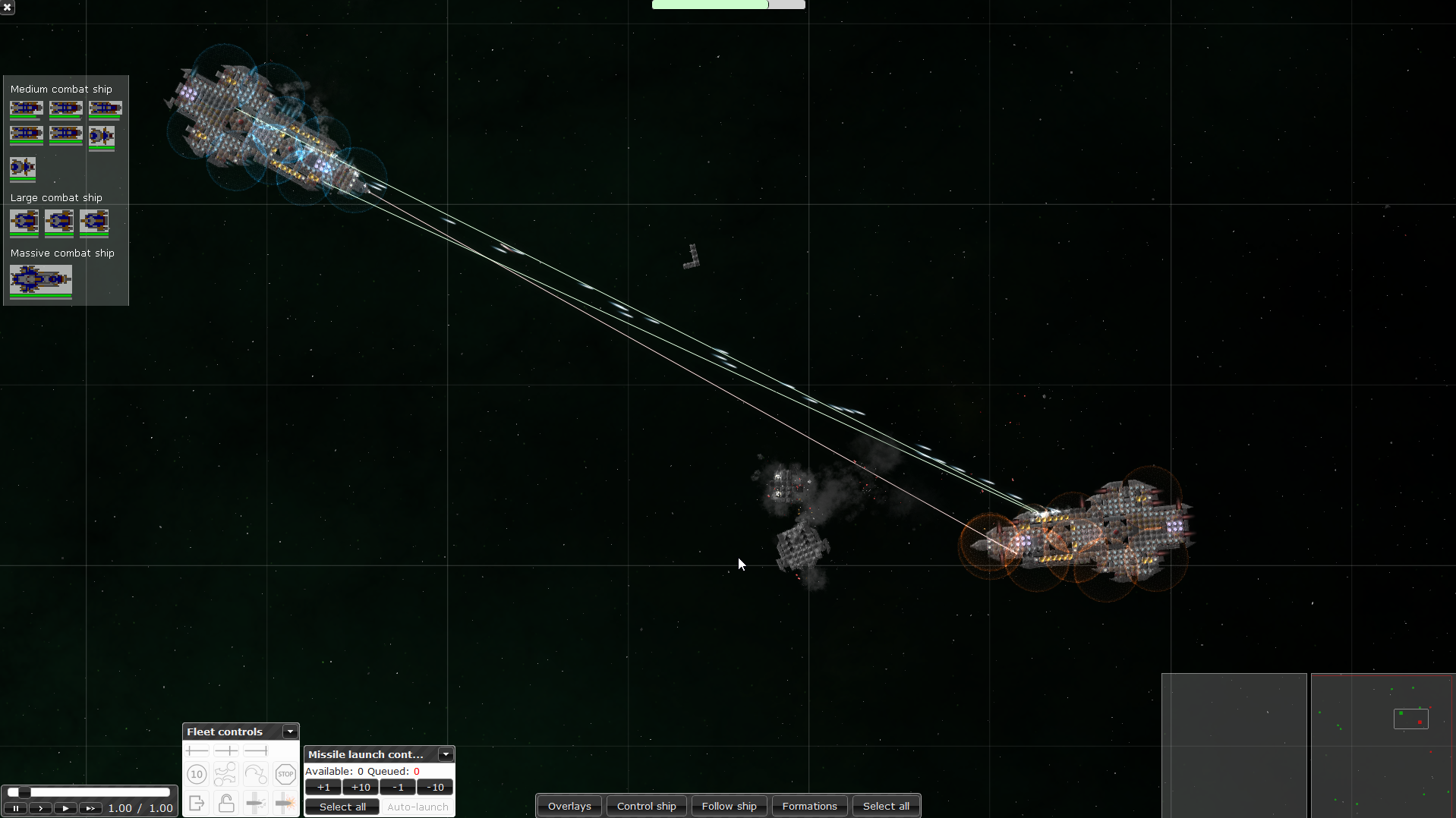 The attention to detail in the physics simulation is the real selling point of the title. With so many arcade-style titles already on the market, it is nice to see developers experimenting with bringing realistic simulation to various genres and finding ways to structure new gameplay around it. The challenge added by having to worry about the positioning of a ships thrusters, resources, and cooling systems breeds creativity. It is also a satisfying way of balancing player created designs without implementing a bunch of arbitrary limitations.

The emergent gameplay ramifications of these mechanics result in some quite amusing visuals as well. Due to the nature of space, the combat ships take the bulk of the damage they receive on one side. As a result, many ships will start spinning uncontrollably as the thrusters on that side get destroyed. Ruptured resource tanks spray out gasses and burning fuels, painting a death blossom around the ship as it vents its life support in an expanding spiral of despair. Similarly, damaged ships, which are still able to mostly control their heading, will follow your movement orders as best they can and pirouette towards the enemy like a hostile teacup ride. 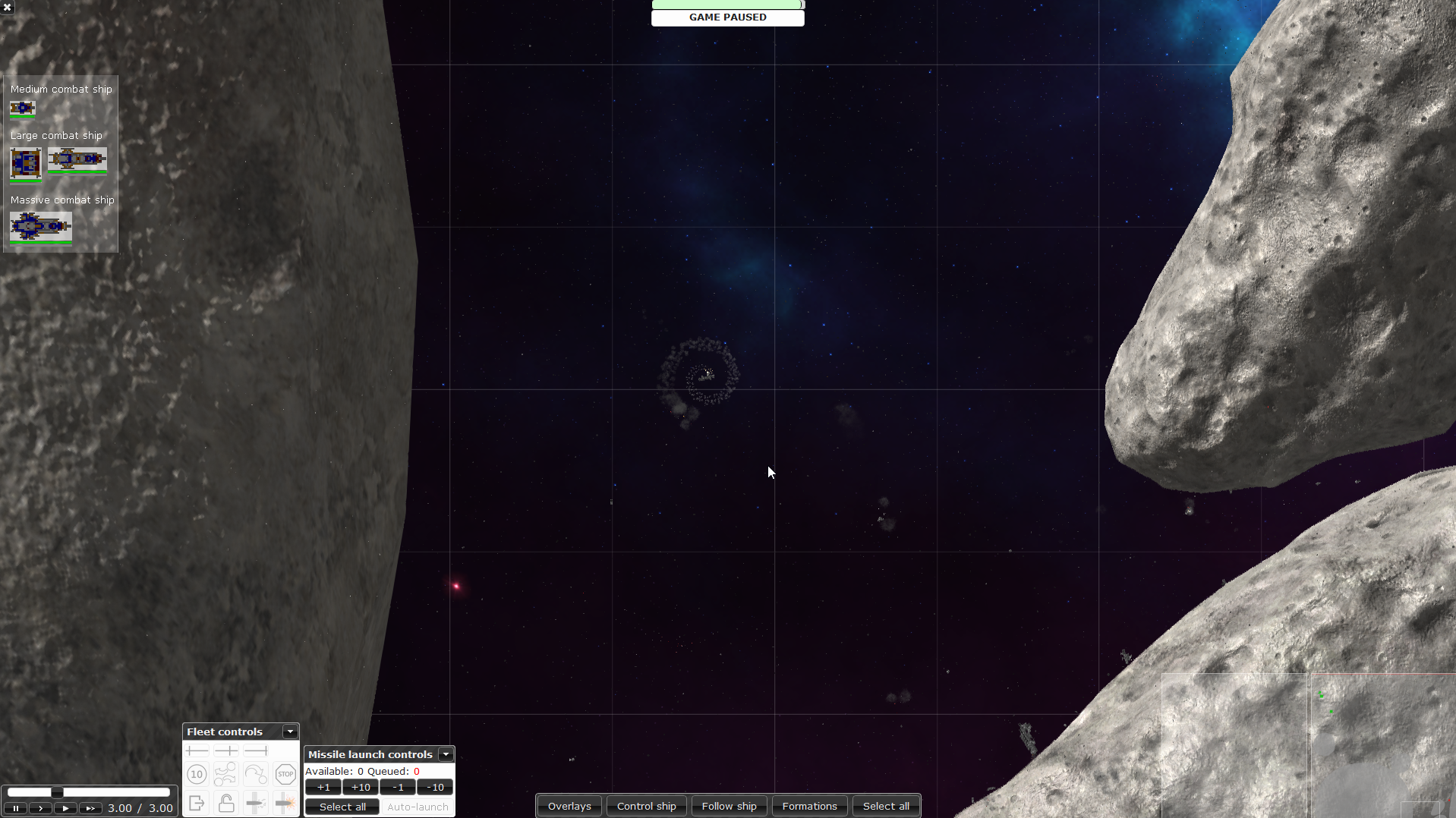 Of course, stopping once they get there is another matter. Often will you watch a large ship futilely firing its thrusters in full reverse as inertia carries it face first into an asteroid or friendly vessel because it was too heavy to stop in time. Weapons also possess kinetic impact. Few things in the game are as satisfying as hitting a small ship with a huge battlecruiser cannon, sending it hurtling backwards out of the fight. You will see almost as many ships get eliminated from a battle by flying uncontrollably beyond the edge of the map as you will see getting destroyed outright by weapon fire.

The developer has been working on the title since 2012 and at time of writing, it has been in early access for just over a year. It is clear to see the overwhelming majority of that development time has been spent on fine-tuning the complex mechanics under the hood which are responsible for these spectacles. Unfortunately, that focus also means the early access warning holds true.

Upon opening the game, you are greeted by the main menu, which is housed in a blinding white menu box. This visually unpleasant colour scheme makes up nearly every menu in the game. Sadly, although the graphics settings let you adjust almost everything you’d expect, this is not true of the interface. A decent amount of thought was put into the options available in the settings menu as evident by the fact that a tab contains a ridiculous number of functions for you to rebind hotkeys with and even has a search box. 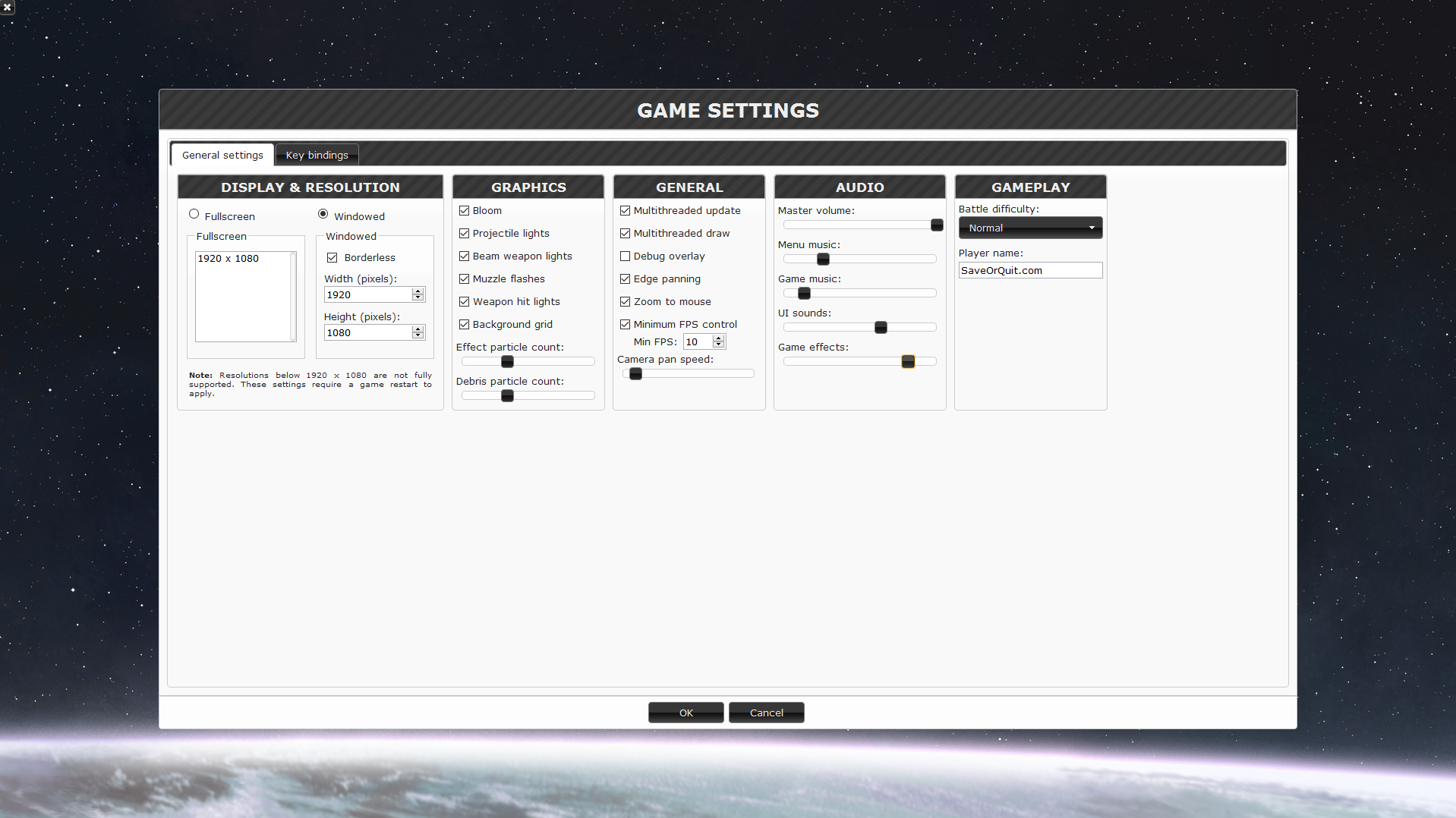 You will find that attention to detail, while fleshing out the backend features of the title and missing obvious forward-facing details, is a consistent problem in each section of the game. In a battle, you will find all kinds of functions you can activate and interface tools you can bring up to assist you in navigating your fleet of custom spaceships to their inevitable destruction. However, while most of these controls have helpful tooltips showing you what hotkeys you have bound to those functions, very few of them tell you what they actually do.

In spite of all the wonderfully detailed statistical information on display, the ship/fleet builder is painfully obtuse. Simply figuring out how to rotate parts took longer than designing my entire second ship. The complete absence of a tutorial in the game would only be forgivable if the interface was user-friendly enough to not need one.

As impressive as the ship movement simulation is, the AI pathfinding is frustratingly unequipped to handle it. Undamaged ships directed to carefully navigate around an asteroid will often do so by ramming it and rubbing along its outer edge until they reach the other side. Sometimes it feels like you do more damage to your own ships than the enemy by ramming them into each other when trying to get them into formation before the enemy reaches you. 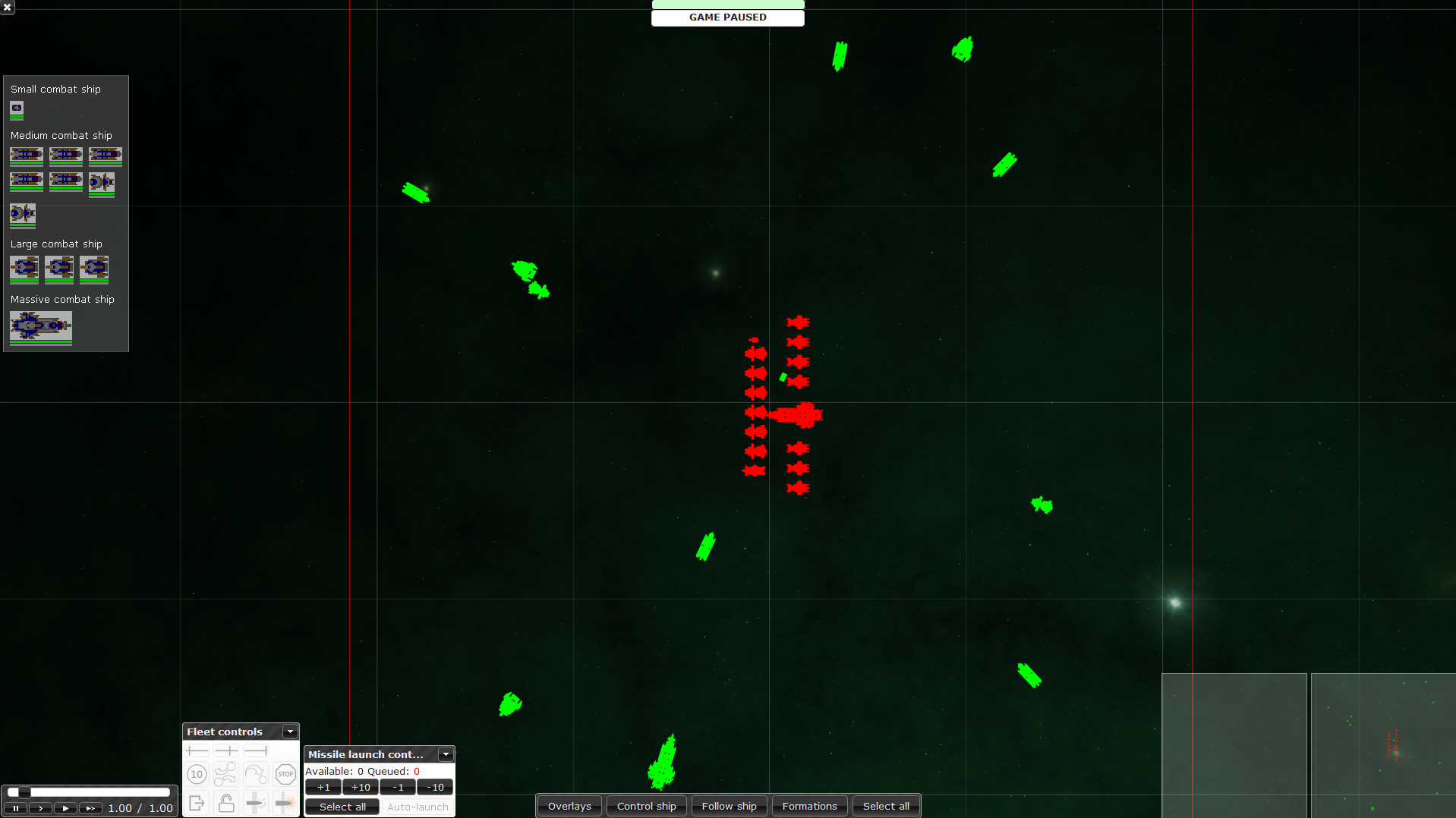 Ordering a fleet to turn around/about face results in a scene similar to a bunch of clowns running in circles, bumping into each other and knocking each other down while trying to get out of the way of a charging bull. Only the bull is your own capital ship preparing to plow through your fleet to take point on the other side. As great as it is to finally see one of these massive space battle games give you the ability to directly control your custom ships in battle, when it comes to ordering fleets effectively, it kind of doesn’t…

At the moment the meat and potatoes of the game seems to be the 12 challenge battle missions which give you the only real objective the game has to offer. Regrettably, that objective is the same as any random or custom skirmish battle: kill them all and don’t die. Clearing all the challenges took a little over an hour. After another couple hours in the editor fine-tuning my own custom fleet, the realisation dawned that there wasn’t really anything to do with it. All that was left was using the battle editor to construct my own arbitrary scenarios. 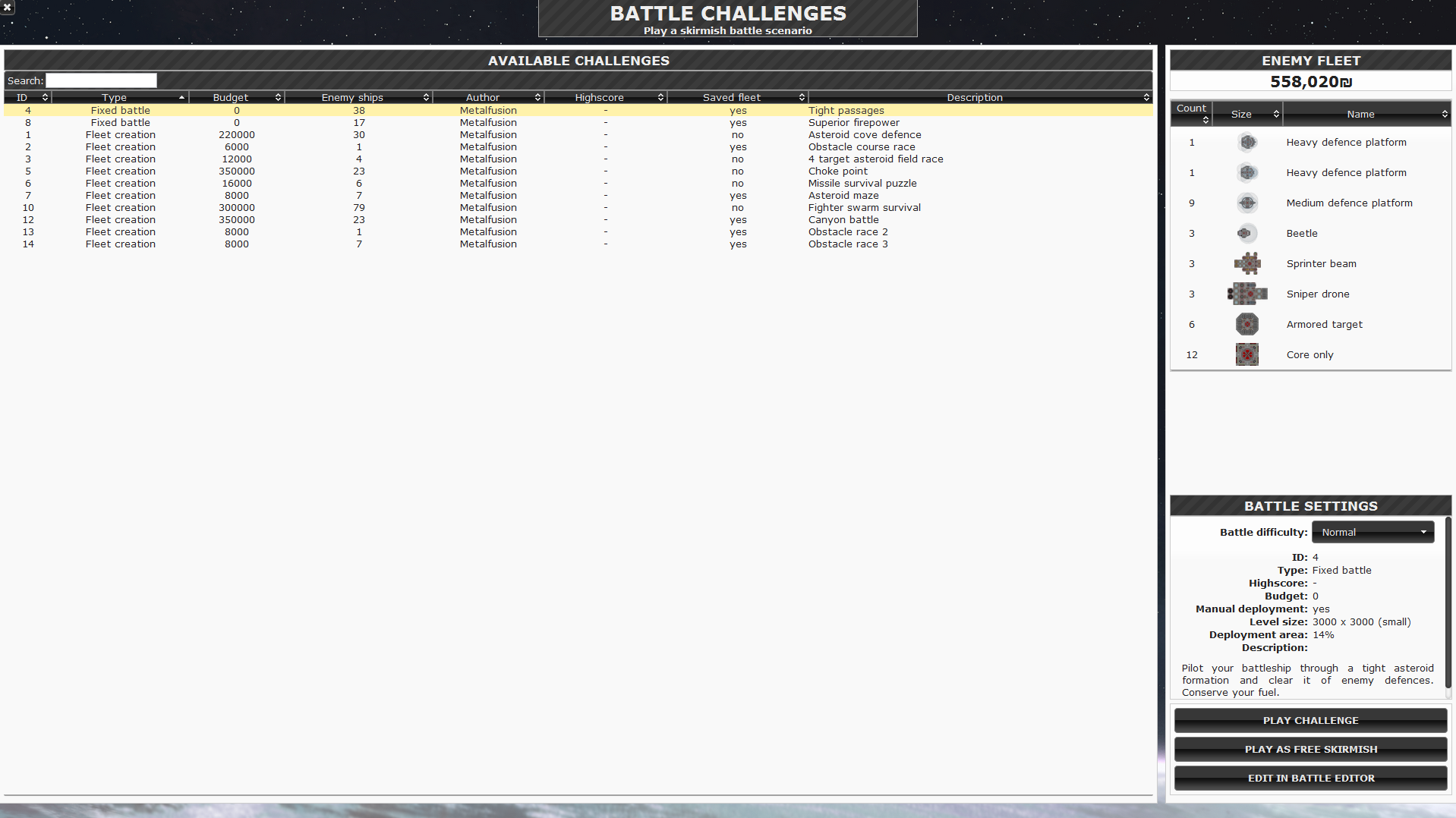 This is where the game truly falls short. It is not really a game, it is a software toy. It has no structure or goals. The title expects you to make your own fun in the form of building a sandcastle and then knocking it down repeatedly.

The developer has said they are planning a campaign mode with persistent fleets which you will have to finance and maintain between missions. Checking the steam depots shows they have been consistently working on and publishing new updates. With that in mind, it is very easy to see the potential for the games current solid foundation to grow into a quality title,but it doesn’t have anything players can really sink their teeth into yet.

Battlefleet Engineer has incredibly robust core mechanics and those alone make its very low price a reasonable value proposition. However, the absence of any sense of progression, story or gameplay hook leaves it with nothing to grant context to those central mechanics and actively engage players. As such, I can’t recommend the game in its current early access state. That said, it is a title worth adding to your wishlist to check up on closer to release to see how it has developed.