Memories of Mars already looks and sounds terrific, but it needs considerable work to attract and retain PVP and PVE players alike.

Memories of Mars gives you the chance to play a clone who wakes up in an underground facility on Mars, only to find that the once-prosperous mining colony there has fallen into disrepair and is inhabited only by armed drones that attack everything.

There’s no story told yet, but when you first wake you see dead bodies, aggressive drones, a facility that seems to be falling apart, and a screen showing a countdown to a coronal ejection: from what I can gather, this is a solar flare that will destroy you and everyone else in the colony.

Escaping the facility with nothing but your pressure suit, a full stomach, a full tank of oxygen, and your mobile 3D printer, you avoid drones and other clones as you try to survive.

The game looks beautiful, though due to the setting there are vast areas with not much in them. Mars is rocky and barren, as you’d expect, but what I didn’t expect was the wonderful range of light throughout the day/night cycle. 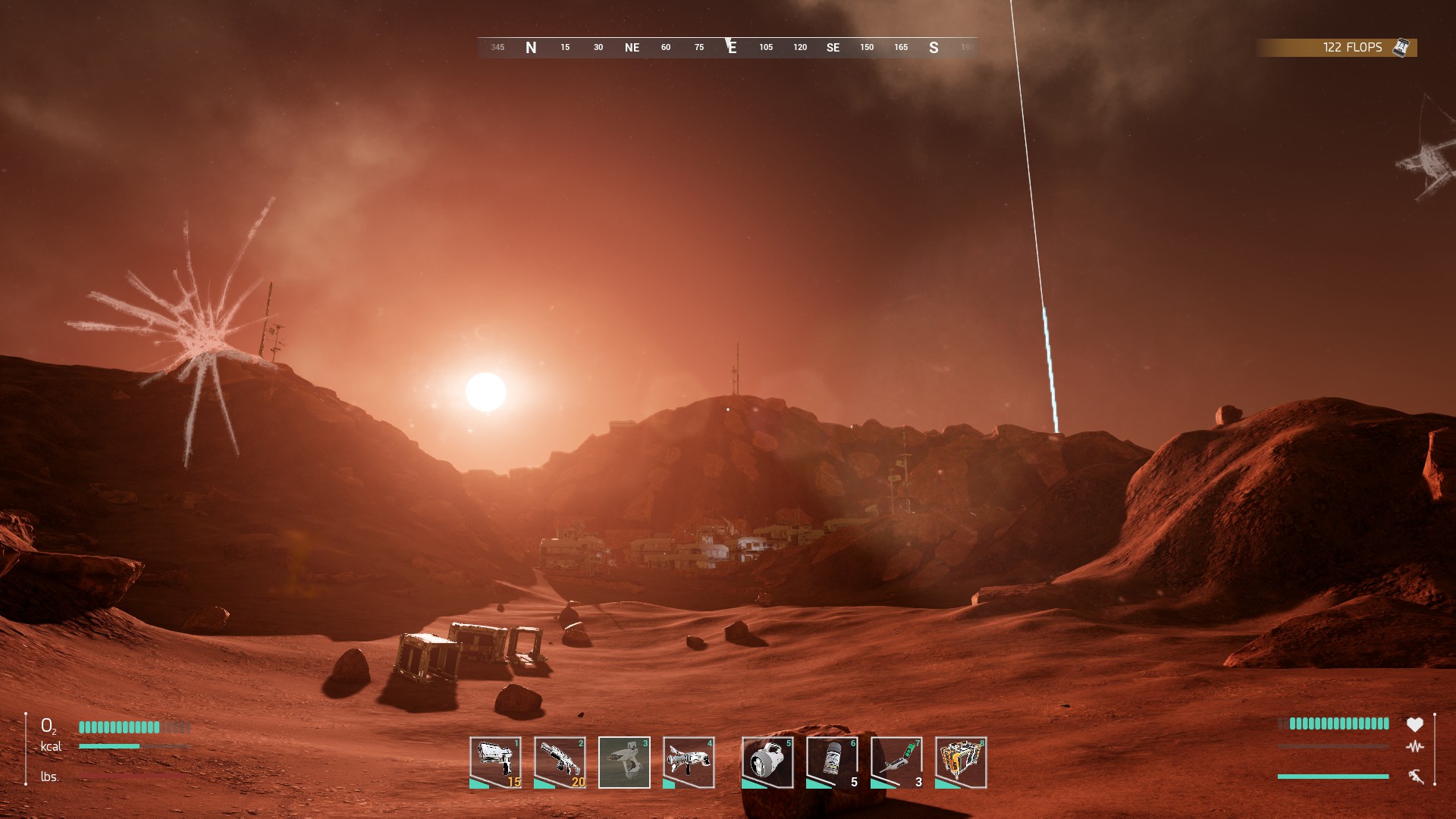 I don’t know how Mars’s sky should look, but wow! There are wonderful red sunsets and sunrises contrasting with a night sky that changes dramatically depending on the position of the two moons. It can go from too dark to see to a moonrise so bright it’s almost like a second day, the harsh light creating super-sharp shadows. It really does look fantastic, but I have no idea if it’s astronomically accurate. 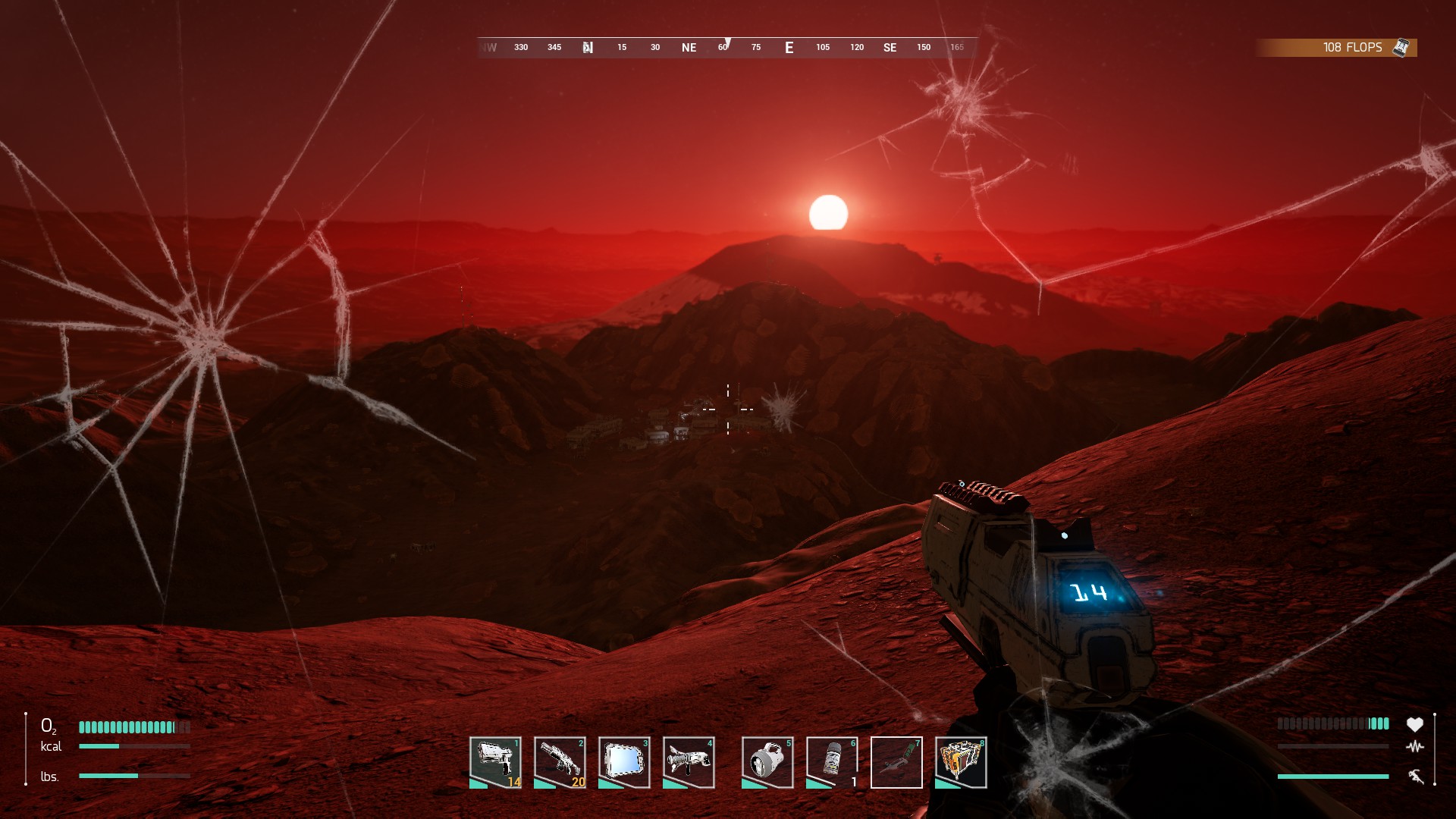 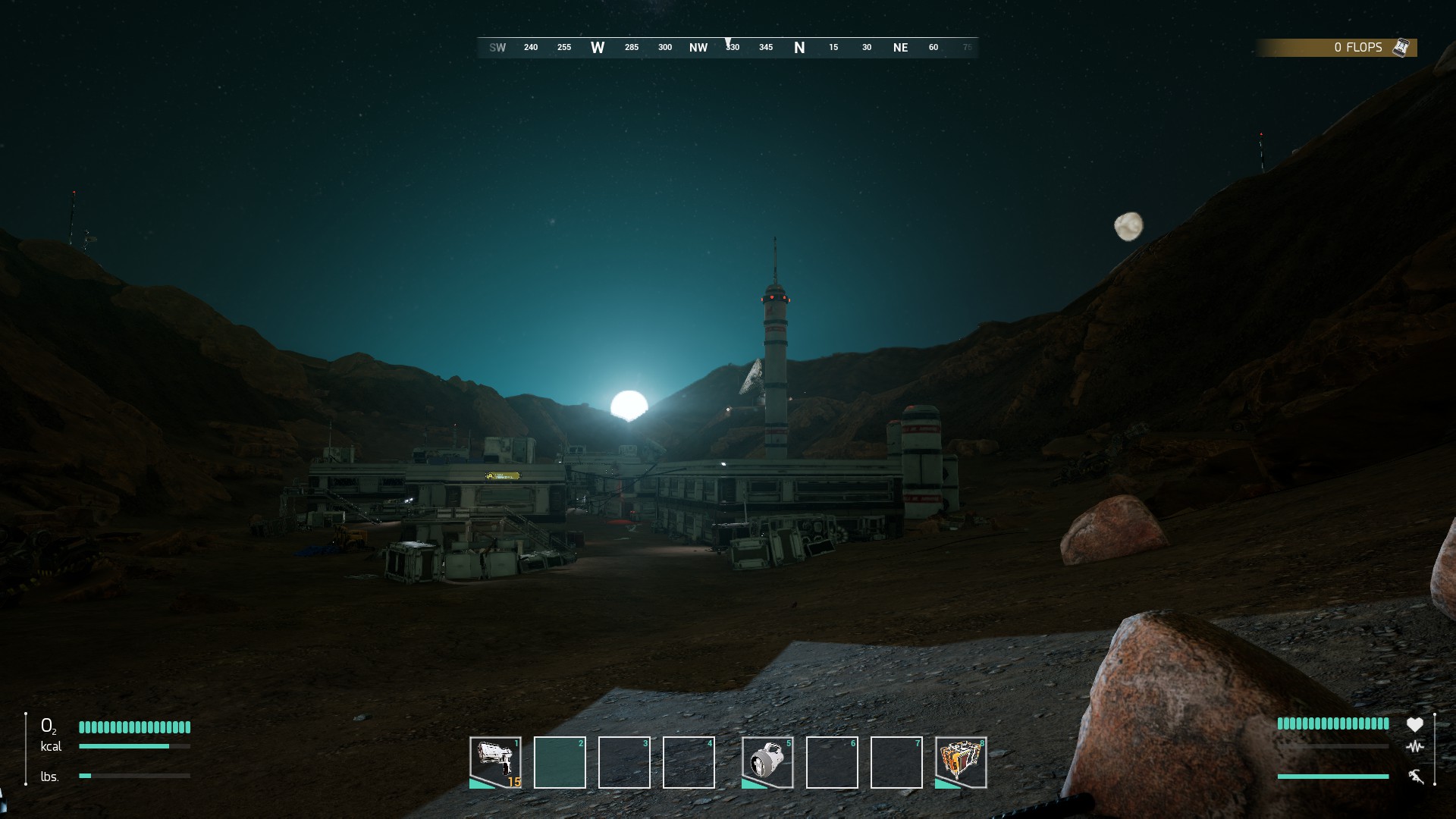 The colony comprises a number of settlements connected by Oxygen pipes as well as a large number of other points of interest farther off the beaten track. While buildings do look similar, it’s obvious that there’s been a lot of attention paid to make each location unique. The only inhabitants other than player clones are the drones. These are well animated and look more realistic than the lag-induced jittery movements of other players, but there’s only a small range; within a short time you’ll have seen most of the enemies in the game. 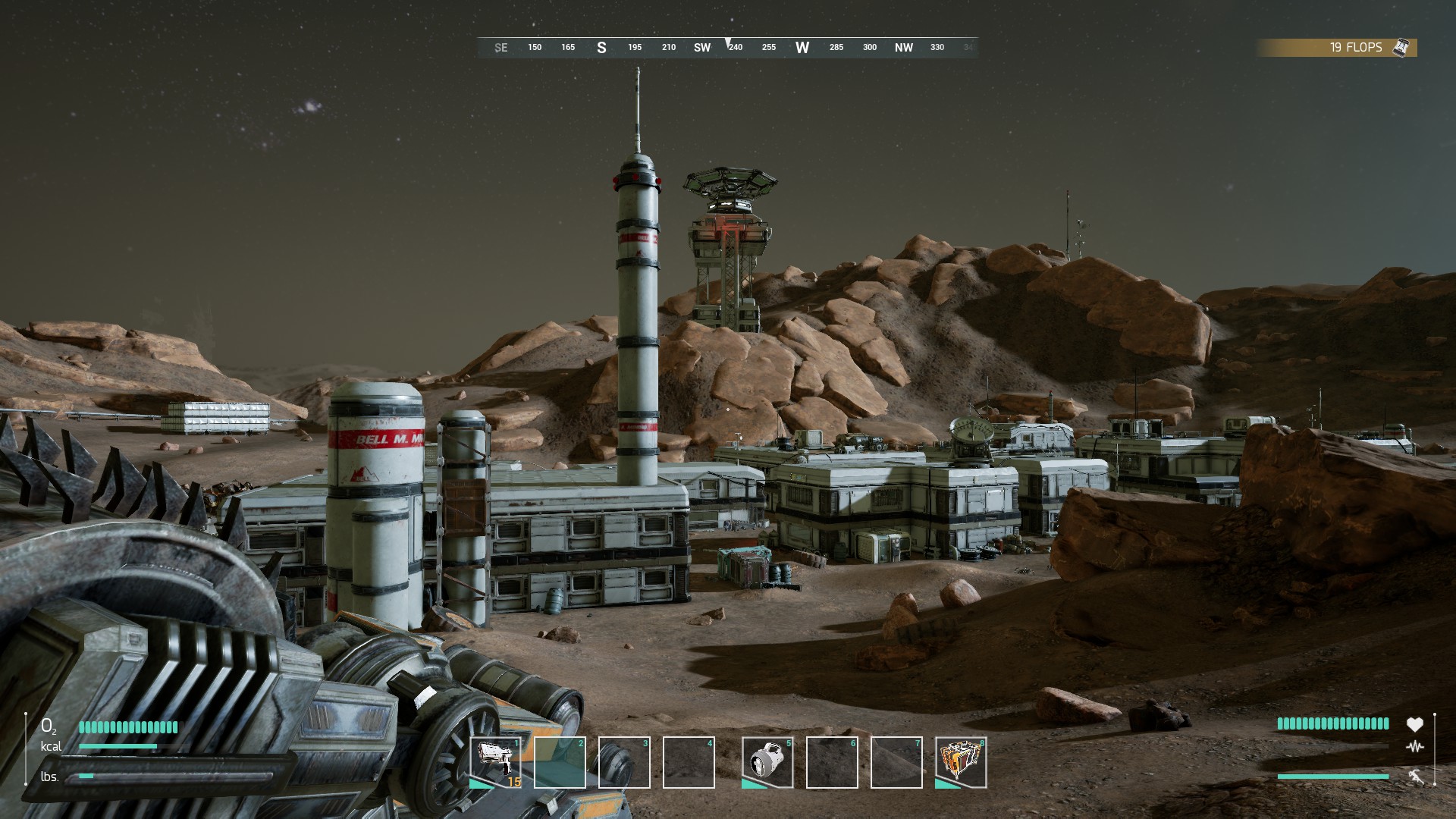 Weather effects are disappointing. Next to Conan’s magnificent sandstorms, the tiny twisters look a bit ridiculous. Clouds are few and far between — there’s little moisture, after all — and the occasional meteor shower looks unimpressive, though I’ve only seen them in the distance. There are graphics settings to optimise performance, but even with everything on ultra the amount of object pop-in is distracting, especially with player-made buildings.

Music is perfect, straight out of a science fiction action movie. It’s alternately loud and dramatic, then quiet and thoughtful. Sound effects are good, though they don’t sound like I imagine they should when heard in the sparse atmosphere through a sealed helmet. There are no voices other than those of your player friends or enemies. 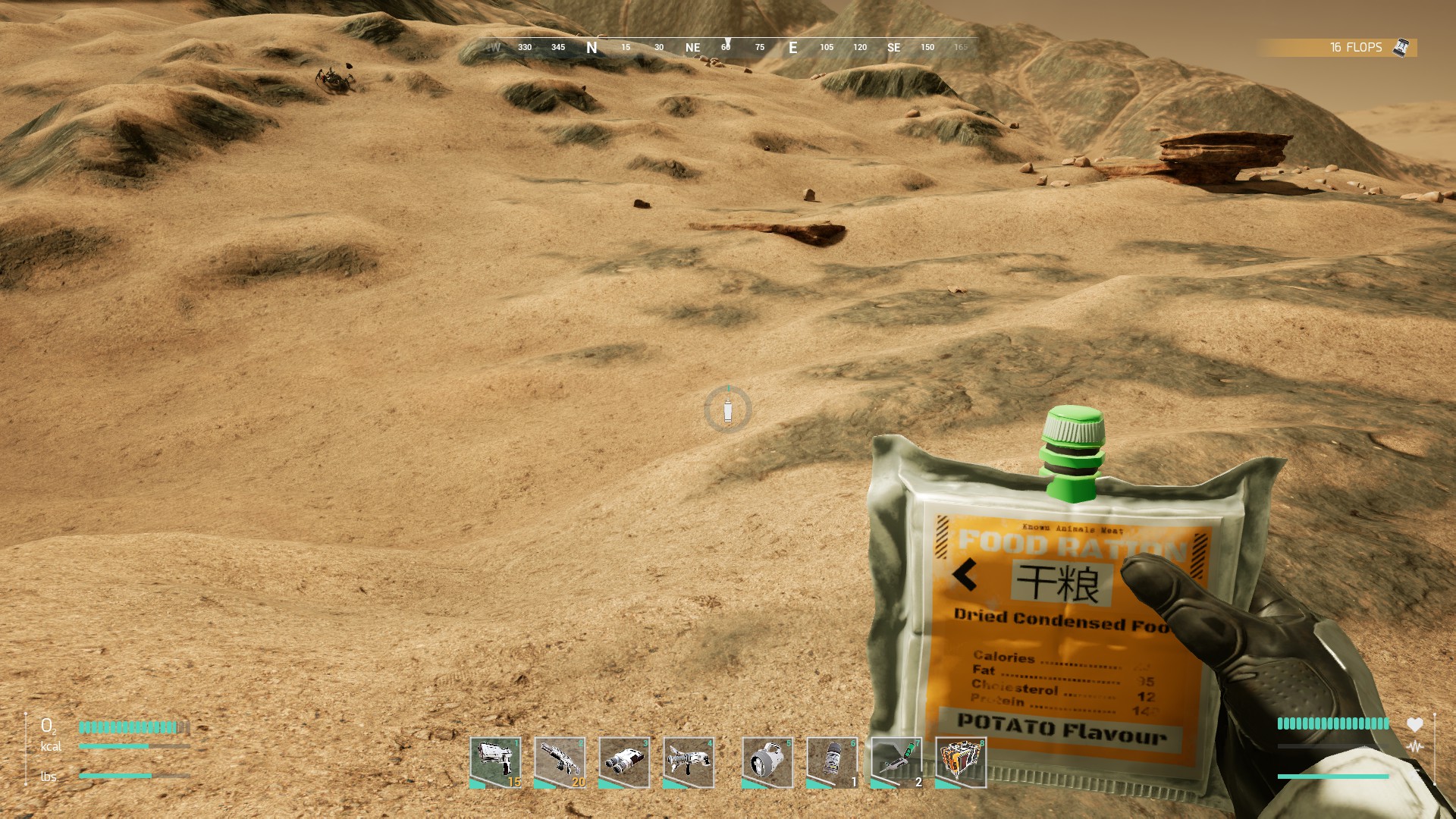 You begin with nothing, you see, so there’s not much shooting to be done until you’ve run for your life, collected some basic resources, and have a chance to put your mobile 3D printer on the ground. You feed this resources you collect and you can make your own gun. Pretty cool, right? Make those drones pay! 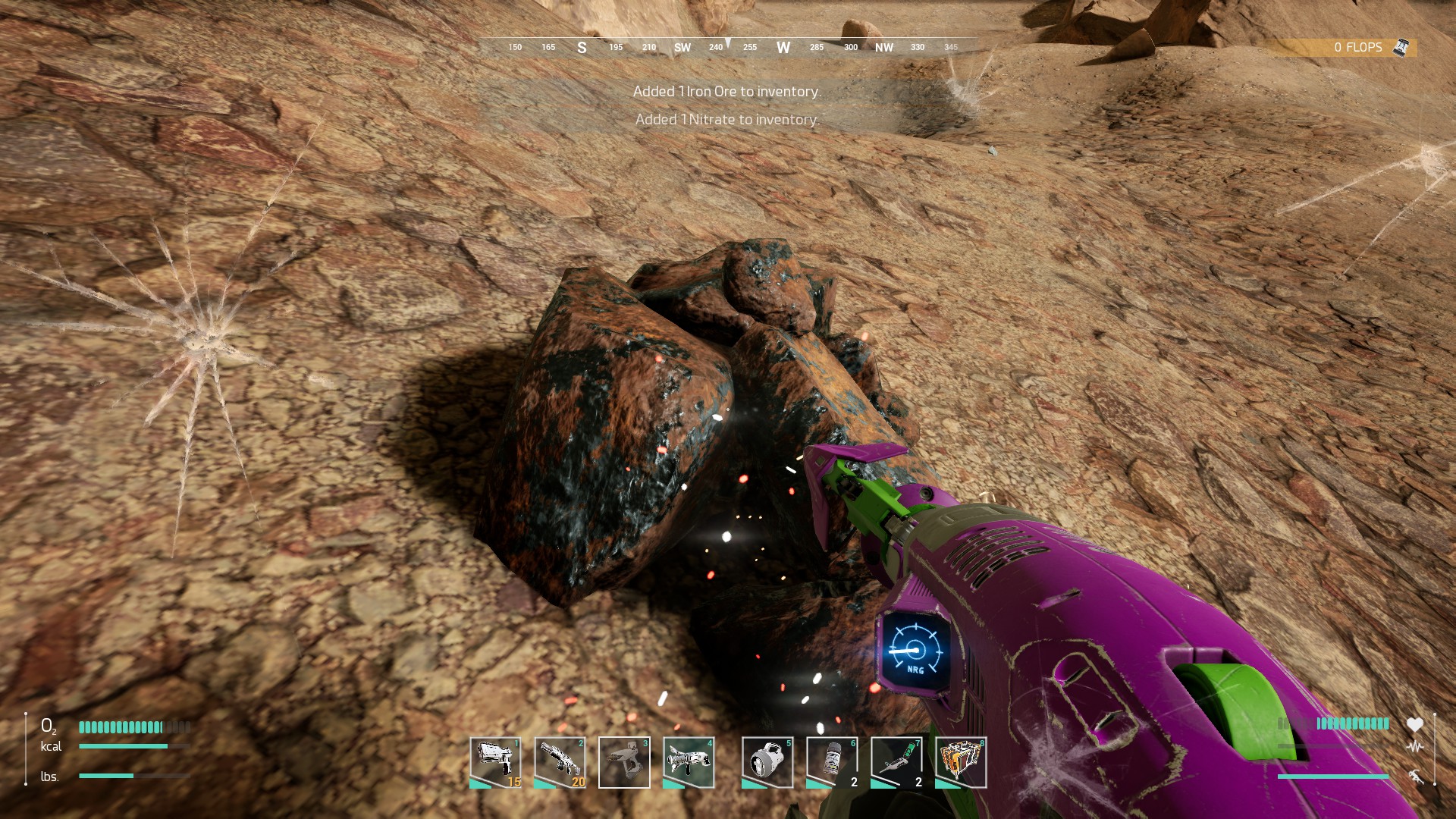 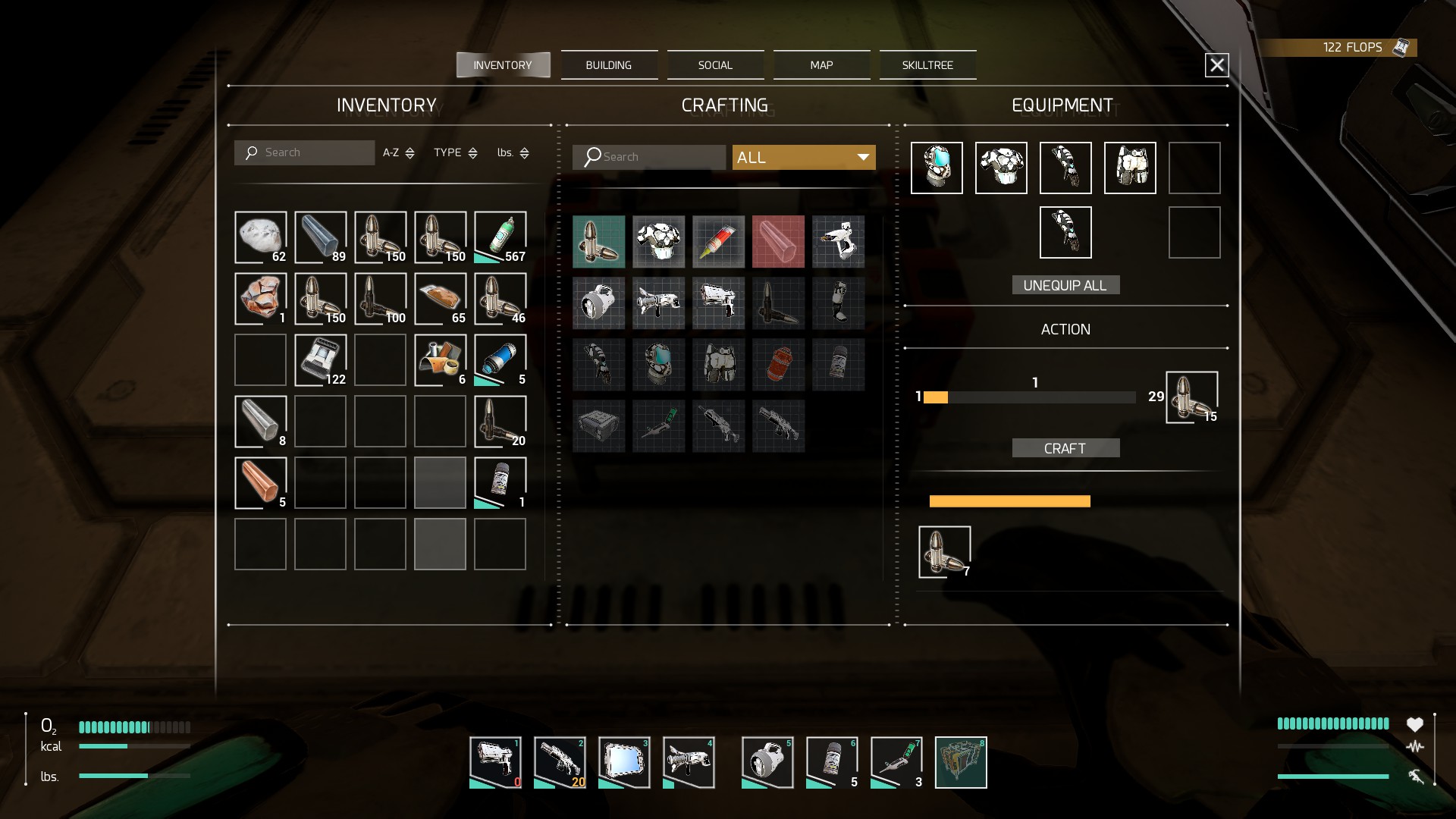 However, the interface gets a bit less intuitive and familiar here, even for a survival-crafting aficionado. Even so, it shouldn’t be too long before you’re running about in armour, wielding a gun and firing bullets you made yourself. You may need to reload a few times to down a drone (especially if your ping is anything more than about 50 ms), but iron ore and nitrate are plentiful.

I’m not a big fan of multi-player shooters. I think the last one I played much of was the original Planetside. So I look at Memories of Mars as someone who loves survival-crafting games, but can cope with a bit of gunplay. With that in mind, and having been repeatedly spawn-killed in my short experience trying to play Rust, I was apprehensive about starting the game. 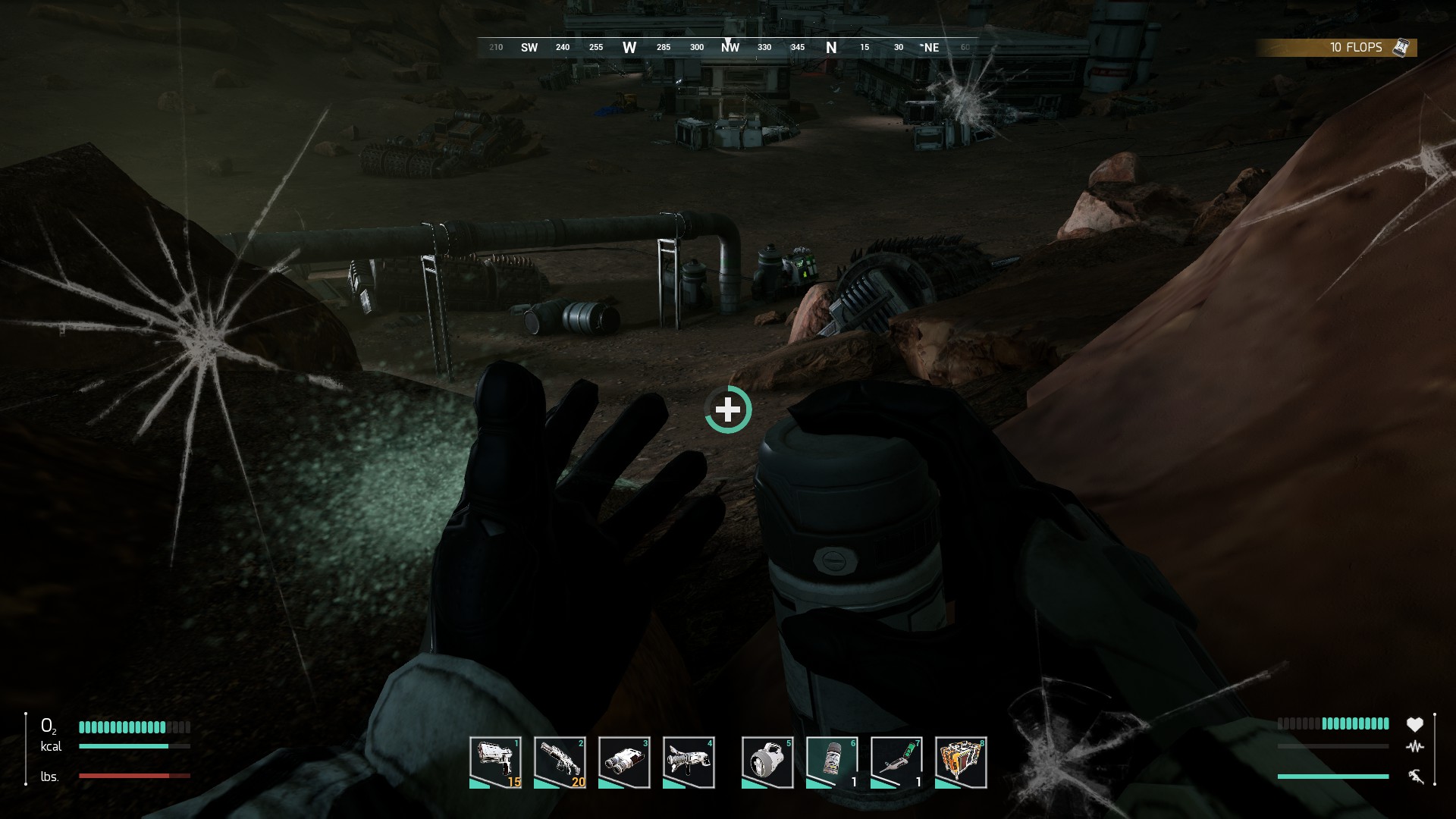 Perhaps as a result of the early reviews, though, the servers are currently very underpopulated. Australia, often neglected, has three whole servers available, but I’ve never seen more than 16/64 people on any of them. For a PvP FPS fan, then, Memories of Mars may not be a great choice at the moment. But for someone who wants to explore another survival-crafting sandbox, it’s far more enjoyable than I was expecting.

But the world does feel rather empty. Part of that is intentional — the game is all about a deserted colony — but with the focus on PVP, PVE aspects have been ignored or delayed as the game goes through Early Access. Exploration is fun, but even with the hand-crafted world it does soon start to feel repetitive. The limited enemy types don’t help; you’ll see the same drones everywhere, which makes sense from a consistent world point of view, but doesn’t create engaging gameplay. 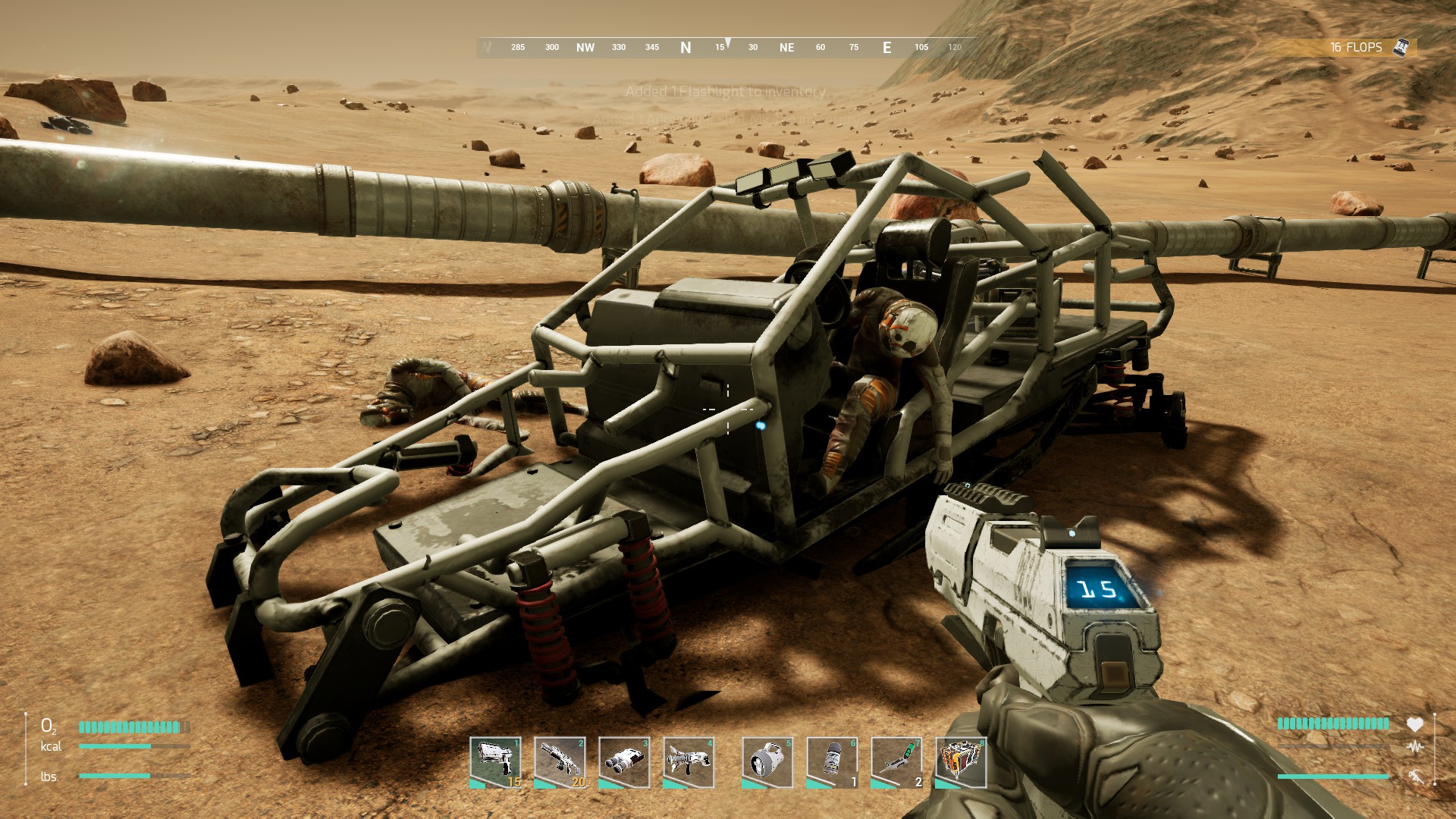 Building and crafting require a LOT of grinding, too: not just in resources, but in FLOPS — a weird energy currency that is earned from killing clones or destroying robots. FLOPS are used to buy skills, which teach you crafting recipes. Before you can build a base you’ll want to learn at least eight different skills plus intermediates. To harvest the resources more efficiently you’ll need another recipe, and to actually build the base you’ll need a welding torch. That’s a lot of FLOPS! You’ll then discover that to protect your base from other player characters tearing it down you’ll have to pay upkeep, also in FLOPS. So you end up grinding every day just to protect your stuff. 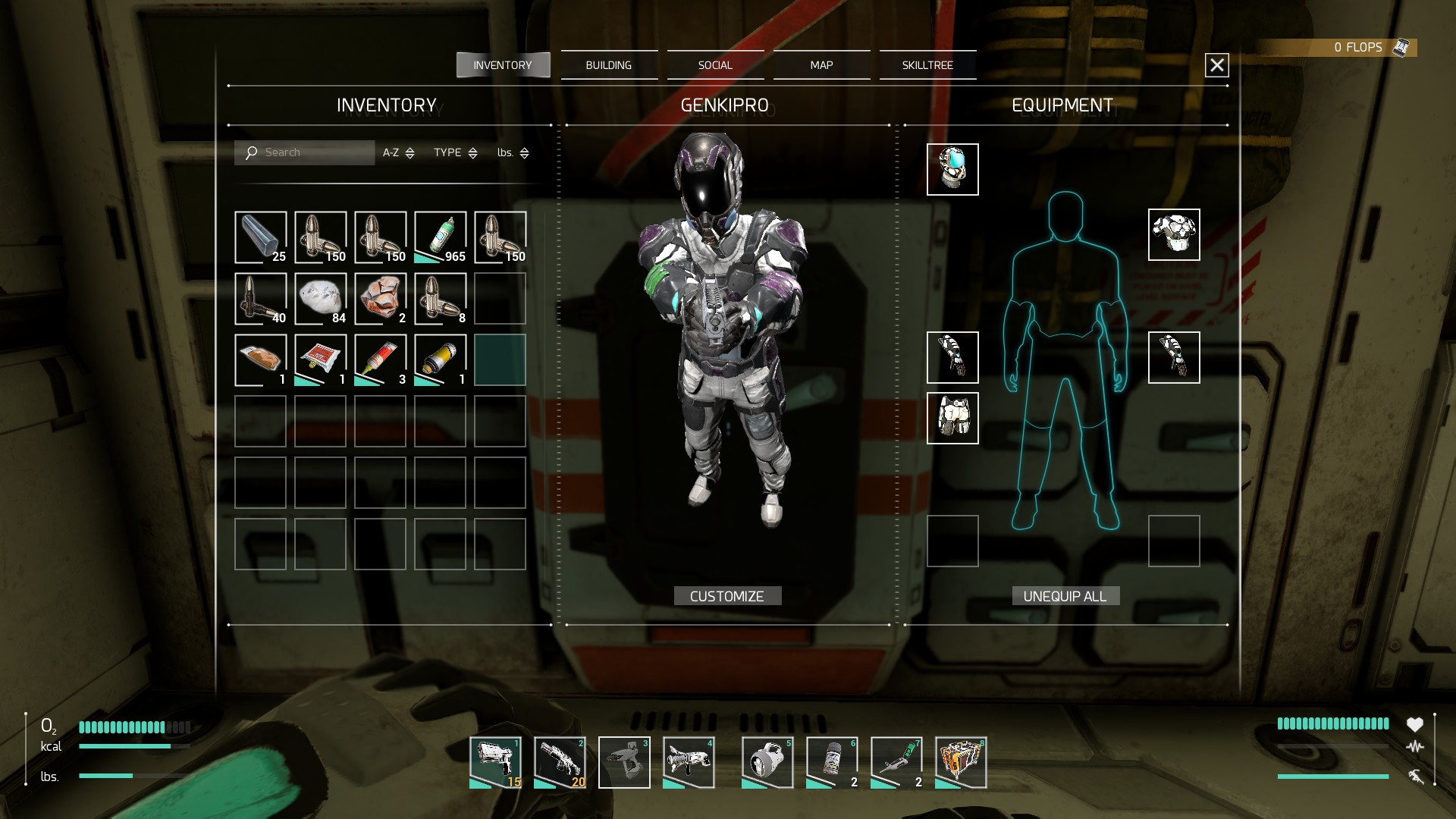 Better equipment requires more skill purchases, and then you’ll have to work out where to source the advanced resources you’ll need — I still haven’t found any magnesium or plant parts. And you have to do all of this while also meeting your basic survival needs of oxygen and food/water. In spite of the relatively small skill trees, it seems even more grindy than other games. When you add in PvP, where anyone who kills you can simply take your carried FLOPS, it becomes even worse. If the servers were full, I can’t imagine anyone with any real-world responsibilities would enjoy this; it’s too easy to lose almost everything.

The game resets every so often, too. The coronal ejection event wipes out everything, but you can carry over a small percentage of FLOPS to the next season, and at the end of a skill tree is an emergency capsule to save some items, too. I can’t imagine how much grinding it would take to get there, though. 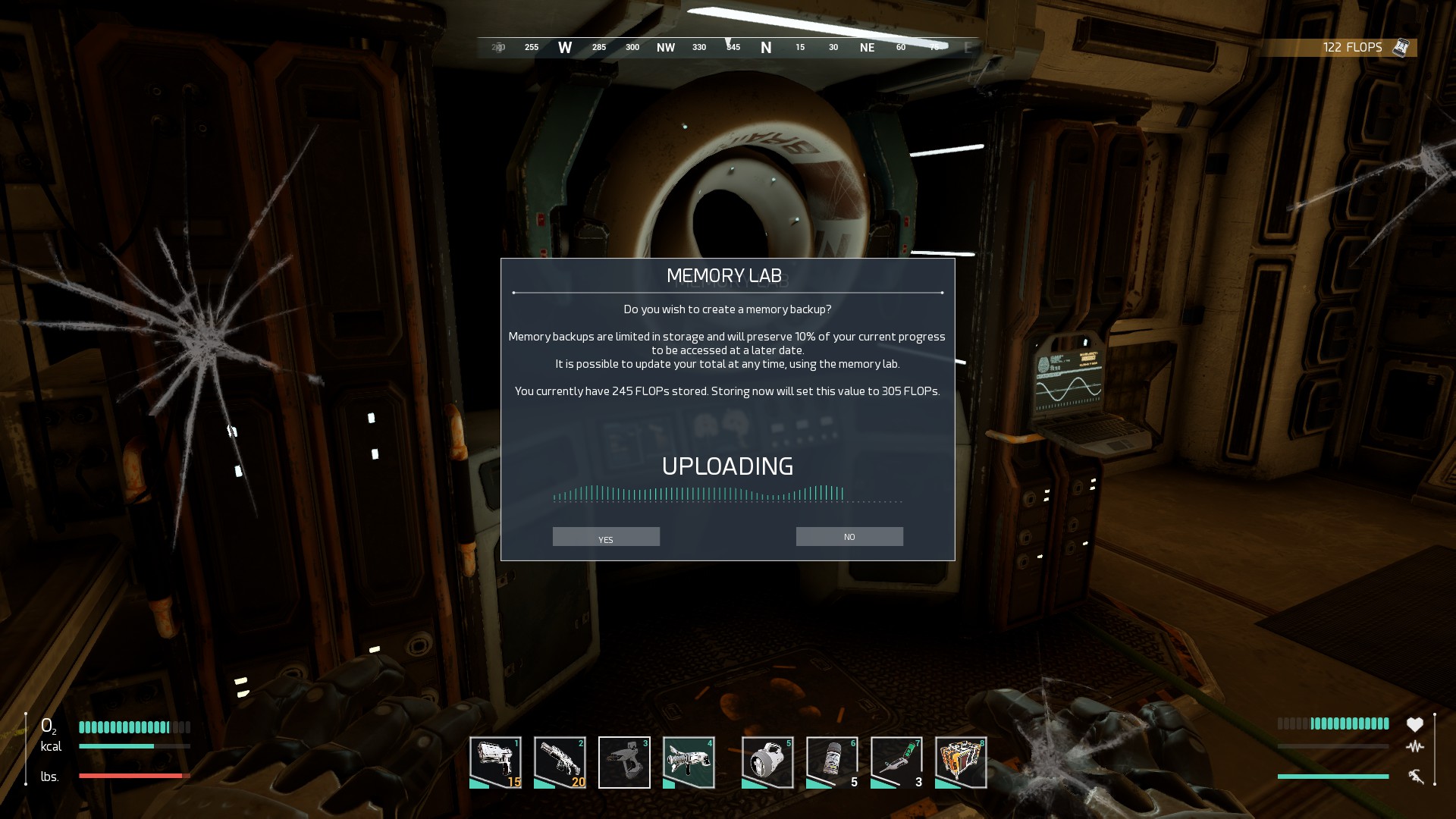 There are some typical EA issues, too: lag (I had issues with pings between 50 – 80 ms), crashes, some UI issues, no map waypoints, no stamina, small world, and you can’t tell what resources are required for an item until you’ve wasted the FLOPS and bought a skill. 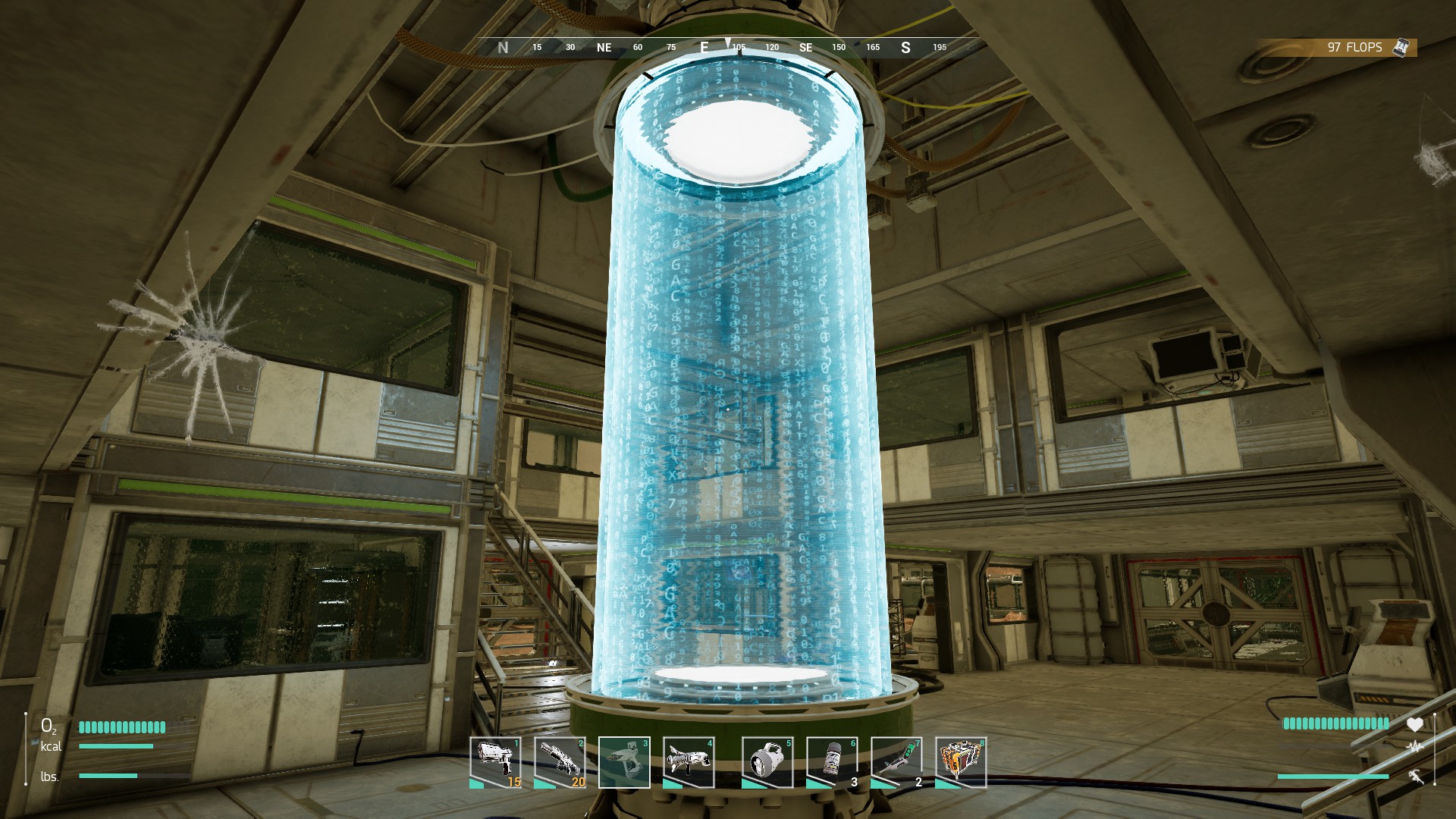 Memories of Mars has a lot of potential, but it remains to be seen whether that potential will be realised.

I don’t like PVP and the current implementation offers little PVE. The skill trees are interesting, but small and expensive, especially since FLOPS are used for base upkeep and blueprints as well. Exploration, crafting, and building are fun, however, and I do like the look and feel of it.

With private servers and a PVE mode it would be easy to recommend. Though the only thing keeping it interesting and fun for me at the moment is the fact that the servers are severely underpopulated — and this isn’t a good thing for a PVP game — I’m having a hard time letting it go. So I guess that means I should recommend it.