A somewhat dark visual novel that tries a little too hard and ends up getting lost in nonsensical imagery and walls of irrelevant text.

2236 A.D. is the first visual novel from Chloro available on Steam, published by Sekai Project.

As the title suggests, the game is set in the year 2236. Two-hundred years ago an event, “Paradigm Lost,” changed the world, removing all of humanity’s collected knowledge. Only the goddess Siri Shion’s great written work, the Akashic Phone, remains as a source of everything that was known before.

Humanity has developed telepathy (“HT”, a term that is explained in confusing detail) as its main form of communication, though there are one in 10000 people unable to use it. The Internet is still present, along with advanced personal communicators and robots. These are imbued with artificial intelligence and are sometimes so human-like it is hard to tell the difference. 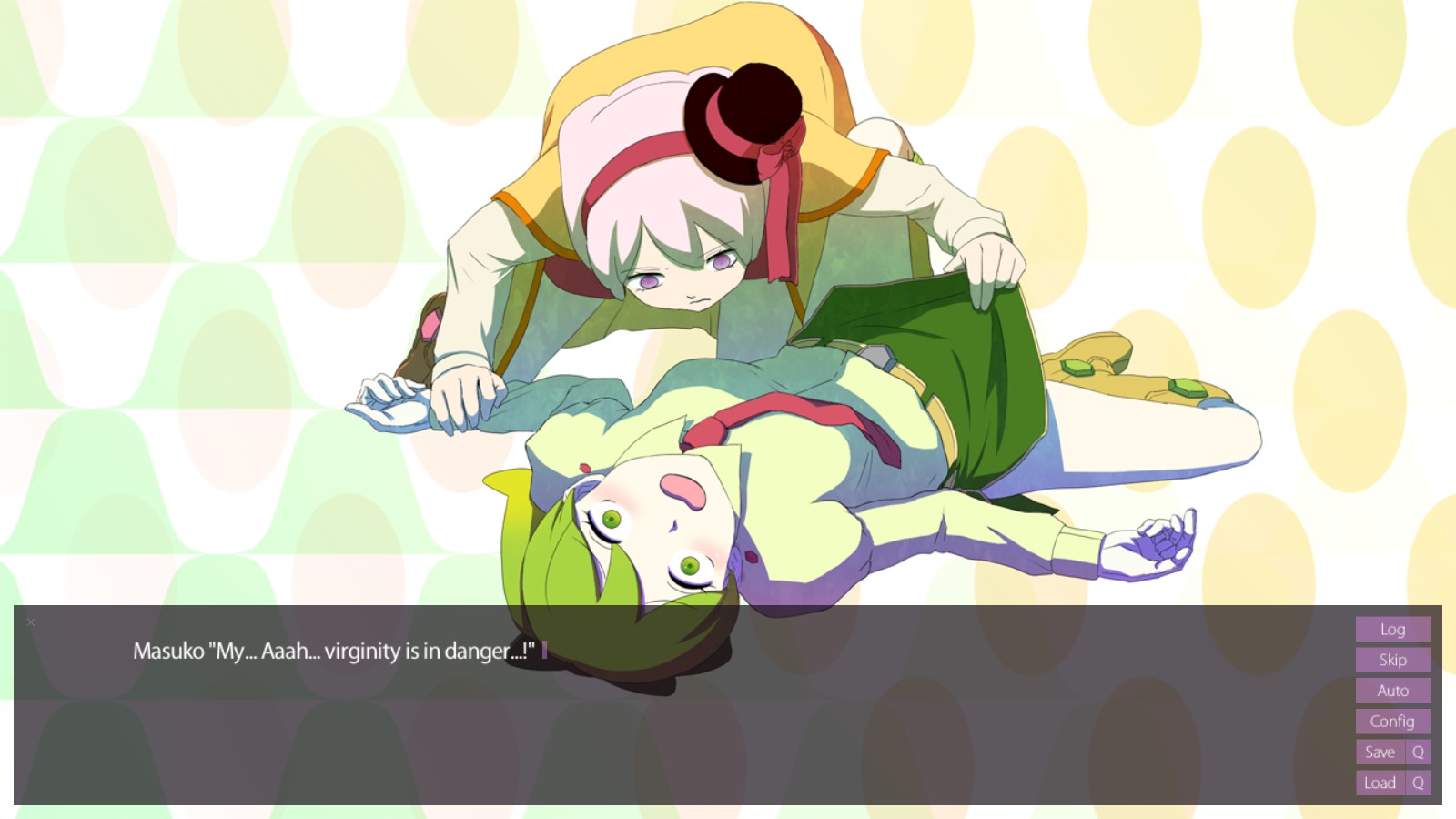 The story focuses on a young man, Yotsuba, remembering the events of the past, beginning in 2231. A high-school student, Yotsuba is relatively popular and smart, but largely keeps to himself. Beginning a new class at school he is thrust into close proximity with two non-HT students: Haru Shion, a quiet girl who seems to ignore everything going on around her, and Shiraishi, an eager boy who doesn’t ever seem to stop talking.

The following weekend, Yotsuba finds a discarded screwdriver in the melting snow outside his house and, linking telepathically to it, he finds that it contains memories of a strange place nearby, in which he discovers another Haru Shion. What does it all mean, and how are these girls connected? 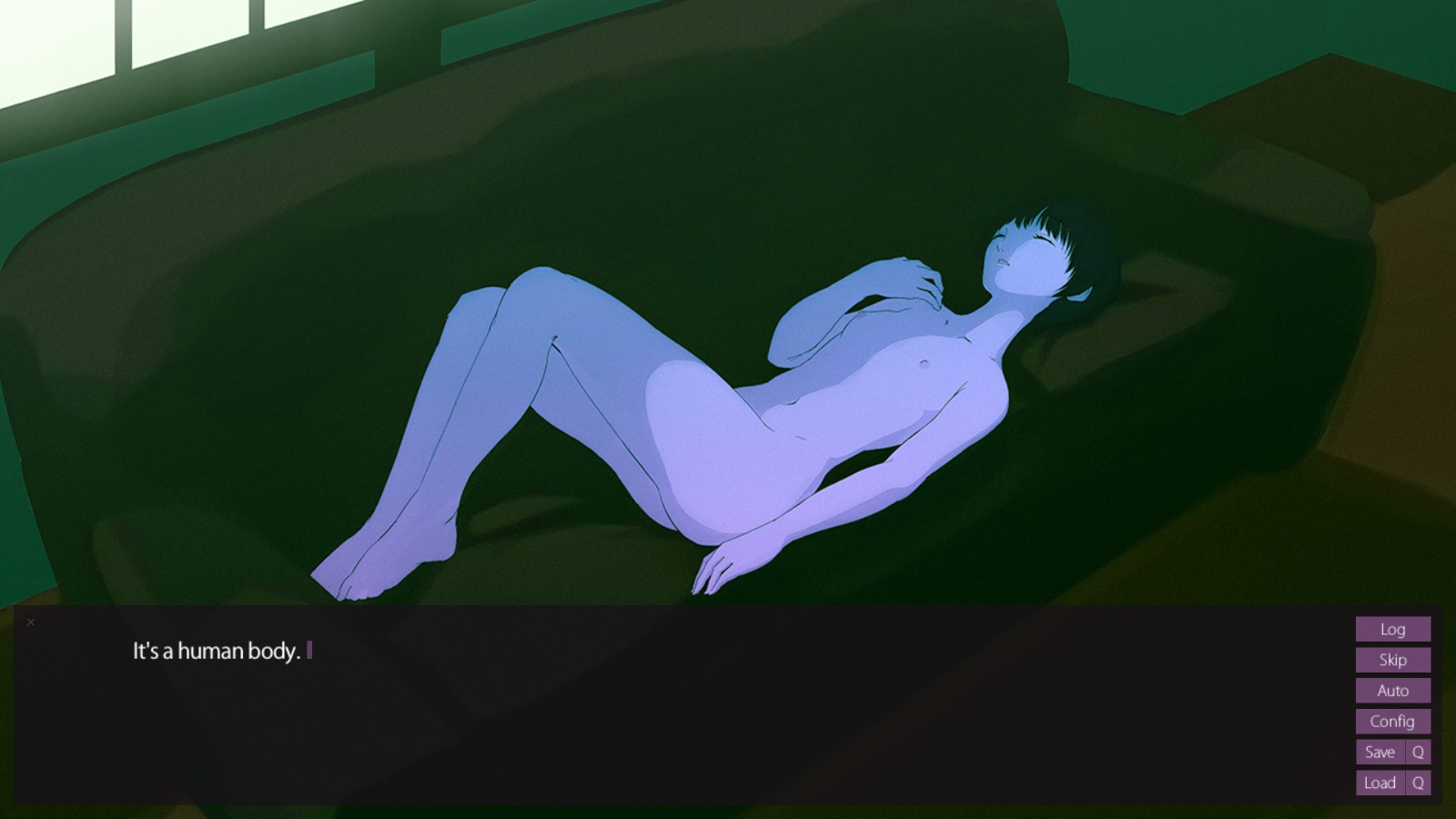 Initially, 2366 A.D. appears to be presented similarly to any other visual novel: static background, paper-doll anime-style characters, and a transparent text box in front of everything, in which you read the story. The user interface, too, is typical of the genre, with buttons for saving, loading, history, skipping, and auto progression.

Once you’ve played for a while, though, you’ll start to notice some differences. For a start, most of the backgrounds are photographs recoloured in various unnatural tones. They change often, too, sometimes with multiple photos forming a progression from one scene to another. This is quite unusual for the genre. Sometimes the normal interface is even removed entirely, and you’re treated to a full-screen dialog or image, or even a video. 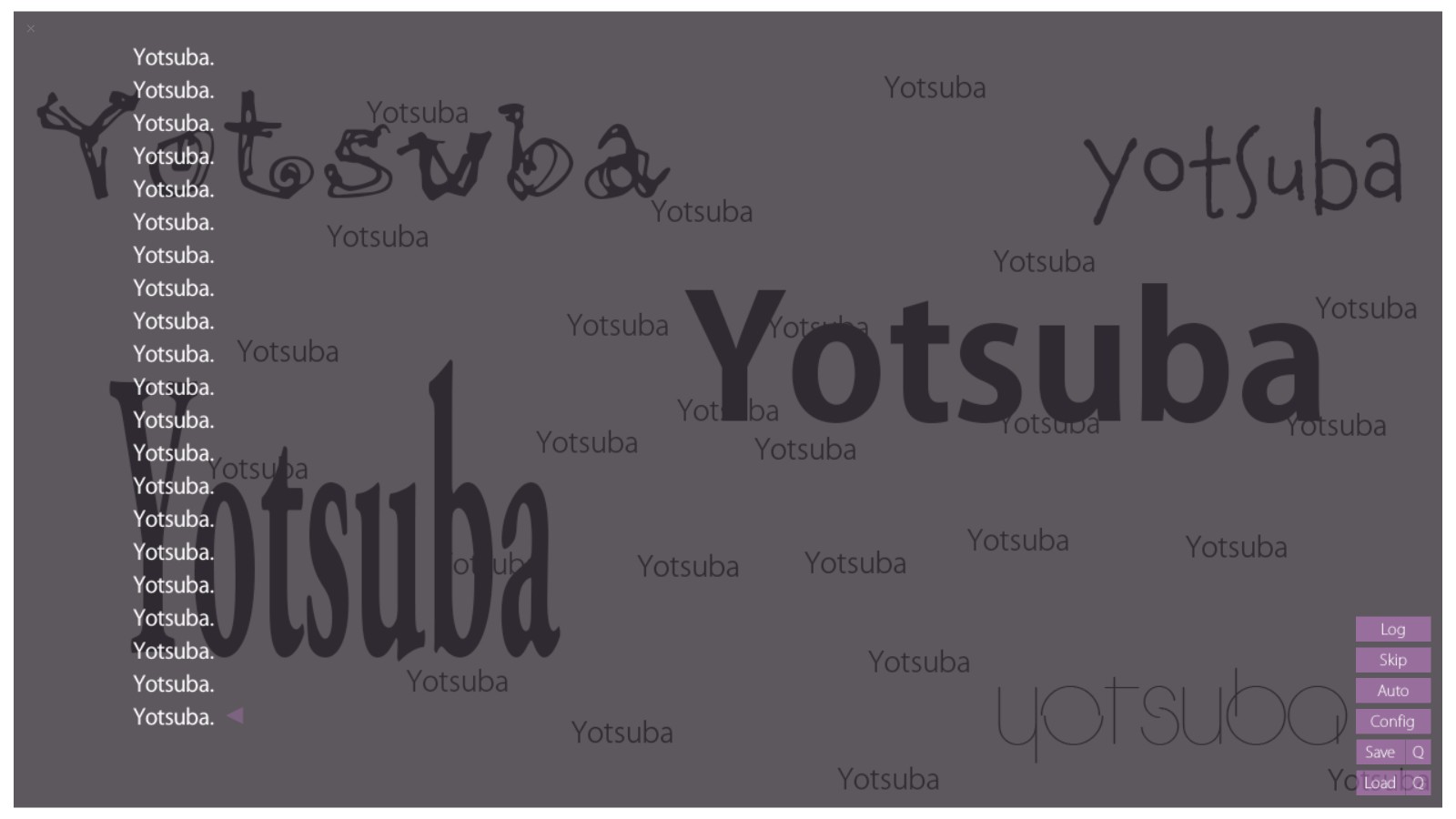 I think part of the reason for this departure from the norm is that the game is reaching for some lofty artistic goal, but I’m not completely sure. In any case, I think the choice of Unity as the underlying technology has allowed these sorts of effects and features, and mostly it works very well. Some of the launcher settings don’t work, though, and there are a few weird hitches and slowdowns, and screens where ‘auto’ won’t progress, requiring manual intervention. Initially I thought these were deliberate, as some of the transitions and text displays are very slowly revealed, but ultimately I think it may be an issue with the implementation; some of the pauses were in very unnatural places, such as in the middle of a character’s name. Oh, and one minor thing that annoyed me is the lack of any separation between a character’s name and his or her dialogue. This made the story harder to read than it should have been.

Character art is mostly disappointing. Perhaps I just don’t like the style, but a lot of it looks to me very amateurish and certainly not to the quality I’ve come to expect from modern anime VNs. There’s some animation of character expressions, but these often look pretty bad. There aren’t many poses, with the existing ones overused, but it is nice to see characters in different clothing (and out of it) in a number of scenes. 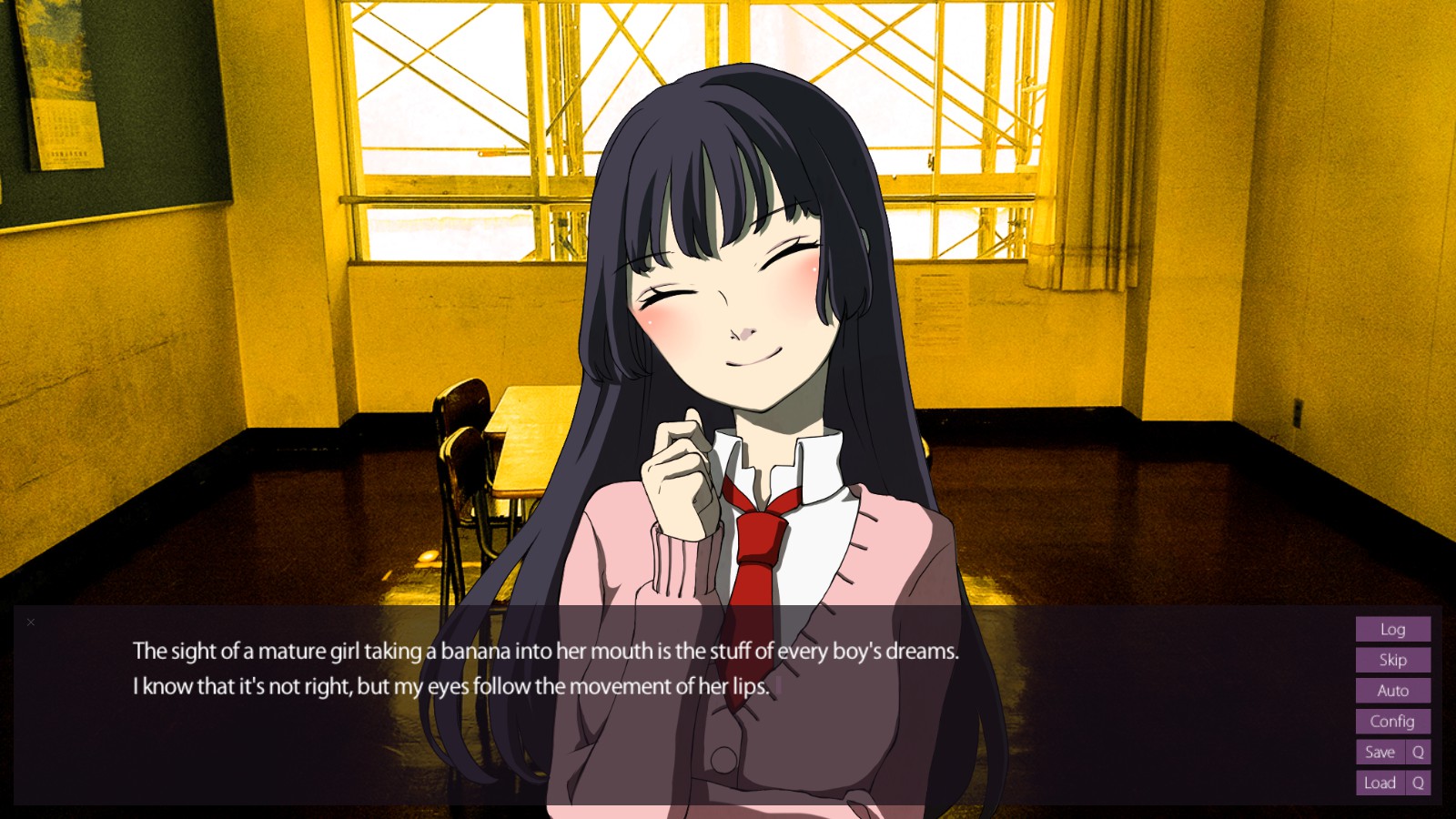 Sound effects are minimal, as is typical for the genre. The soundtrack is eclectic, suiting the general feel of the game, ranging from a more-enjoyable-than-usual title track in Japanese, through typical anime-style musak, to ambient electronic, and a fair bit of classical. It’s a good mix. There is no voice acting at all.

Gameplay in 2336 A.D. is standard for the genre: read through the story in bite-size chunks while you admire the backgrounds and characters. It includes a number of either-or decision points and multiple endings, which to me is always a good thing, but I confess that after over 10 hours of Lynch-like story telling I was well and truly ready to throw in the towel, so I haven’t fully explored all of the story branches. The save system makes it easy to save at each choice and replay from there. 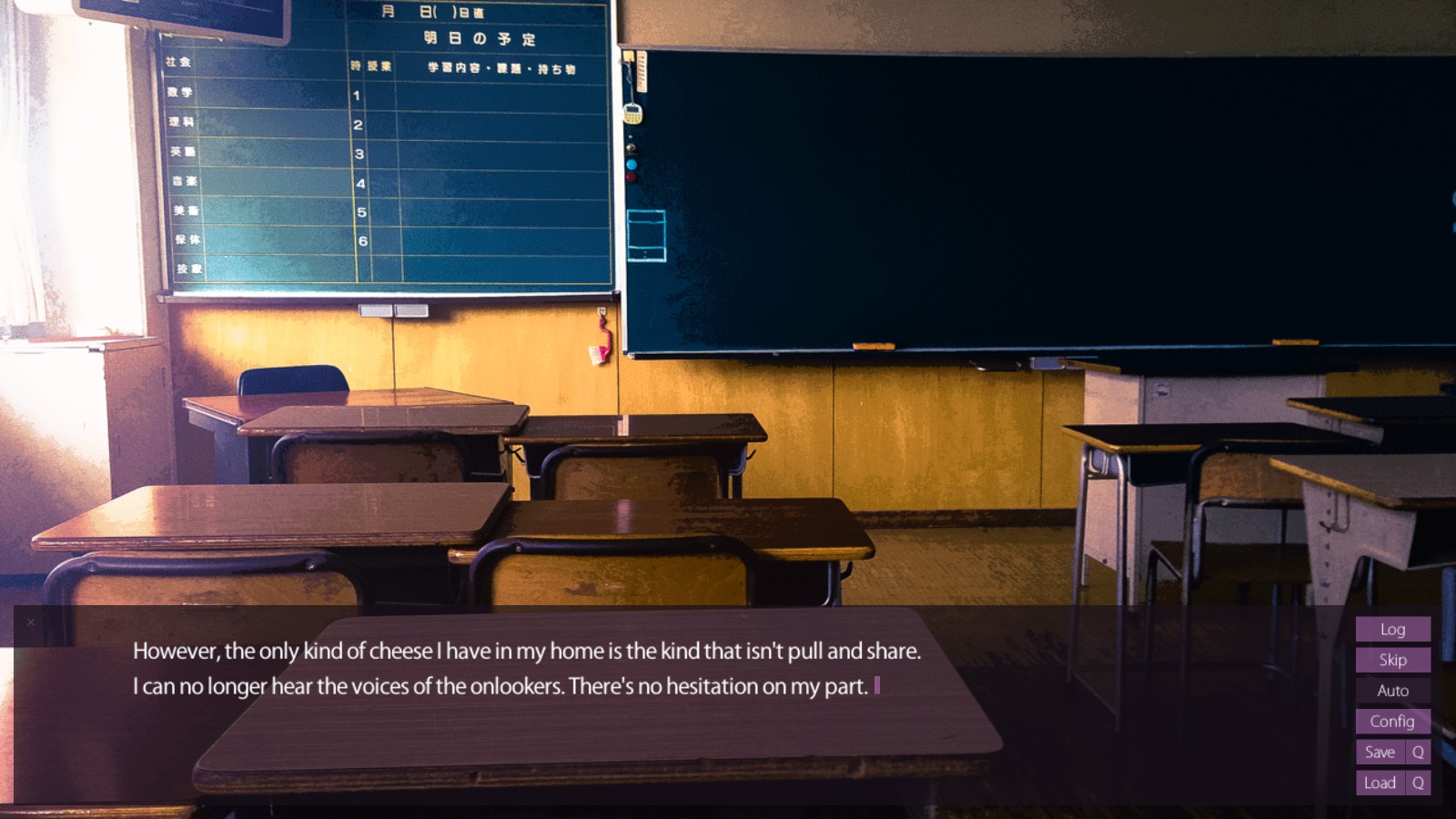 The game world is really quite interesting, with some great ideas, like telepathic canals, gates, and thought formatting. But the story itself is mostly about character development; very little actually happens for huge portions of it.

The script is mostly reasonably translated grammar-wise, but it’s very hard to follow. It jumps around a lot, both within scenes and across time. It’s a bit too ‘artistic’ for my tastes, too; to me it feels like someone is trying way too hard to be edgy and surreal, and it’s completely overdone. It ends up ruining what could have been a good story. It’s also far too long; it would be a better tale if it were a quarter of its current length. There’s a section that goes on for minutes filled with Unicode code page highlights, FFS! And it seems that the writer is obsessed with mathematics. 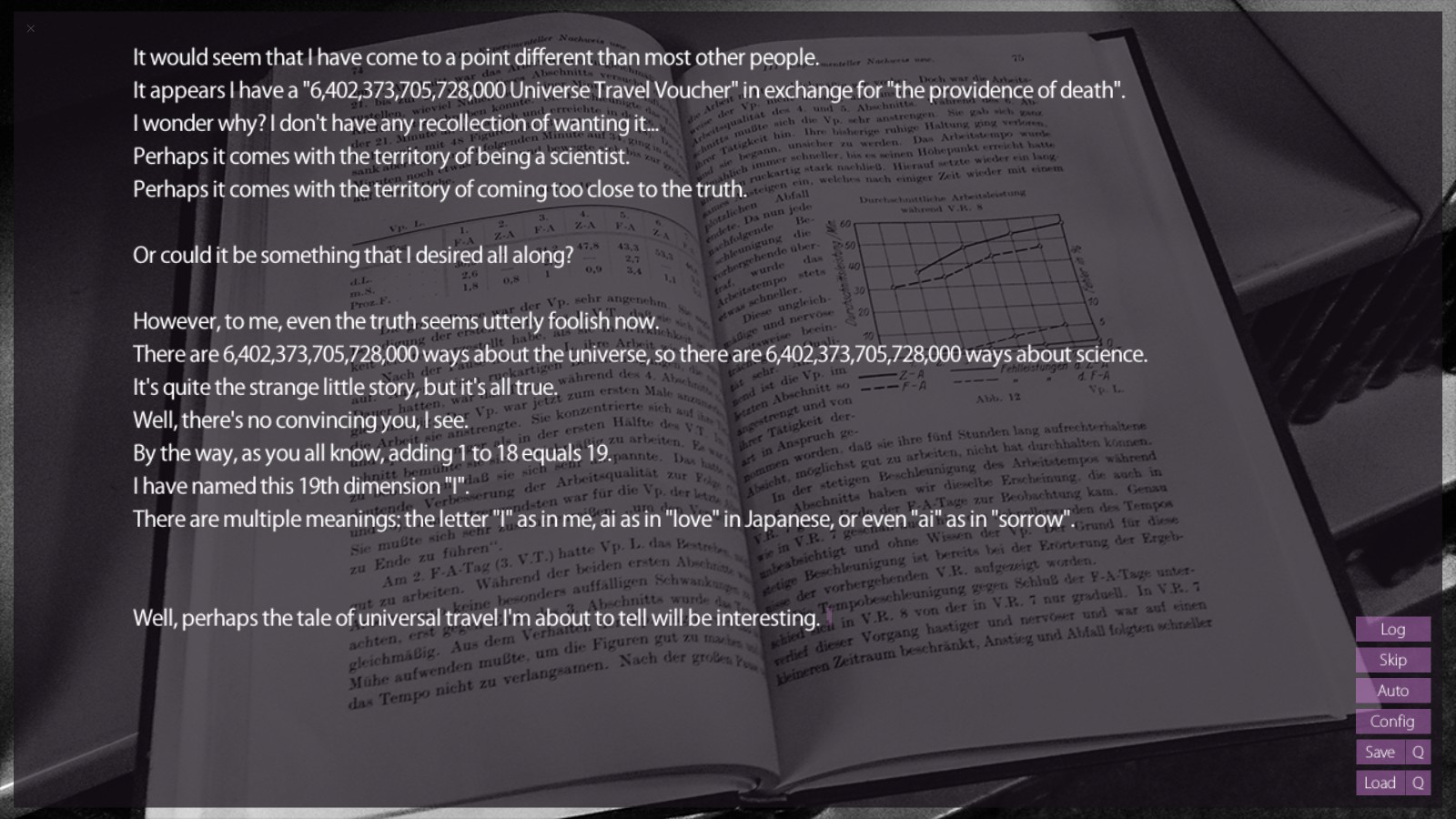 To make it worse, characters are unconvincing and inconsistent and dialogue is unrealistic, even accounting for some of the end-game revelations. Yotsuba has less emotional maturity than my toddler. He alternates between calm nice guy and violent psychopathic sexual predator, with a fair dose of serious depression thrown in. Hime (senpai) is just as bad. Some of the scenes that focus on dialogue between the two of them make very little sense at all. 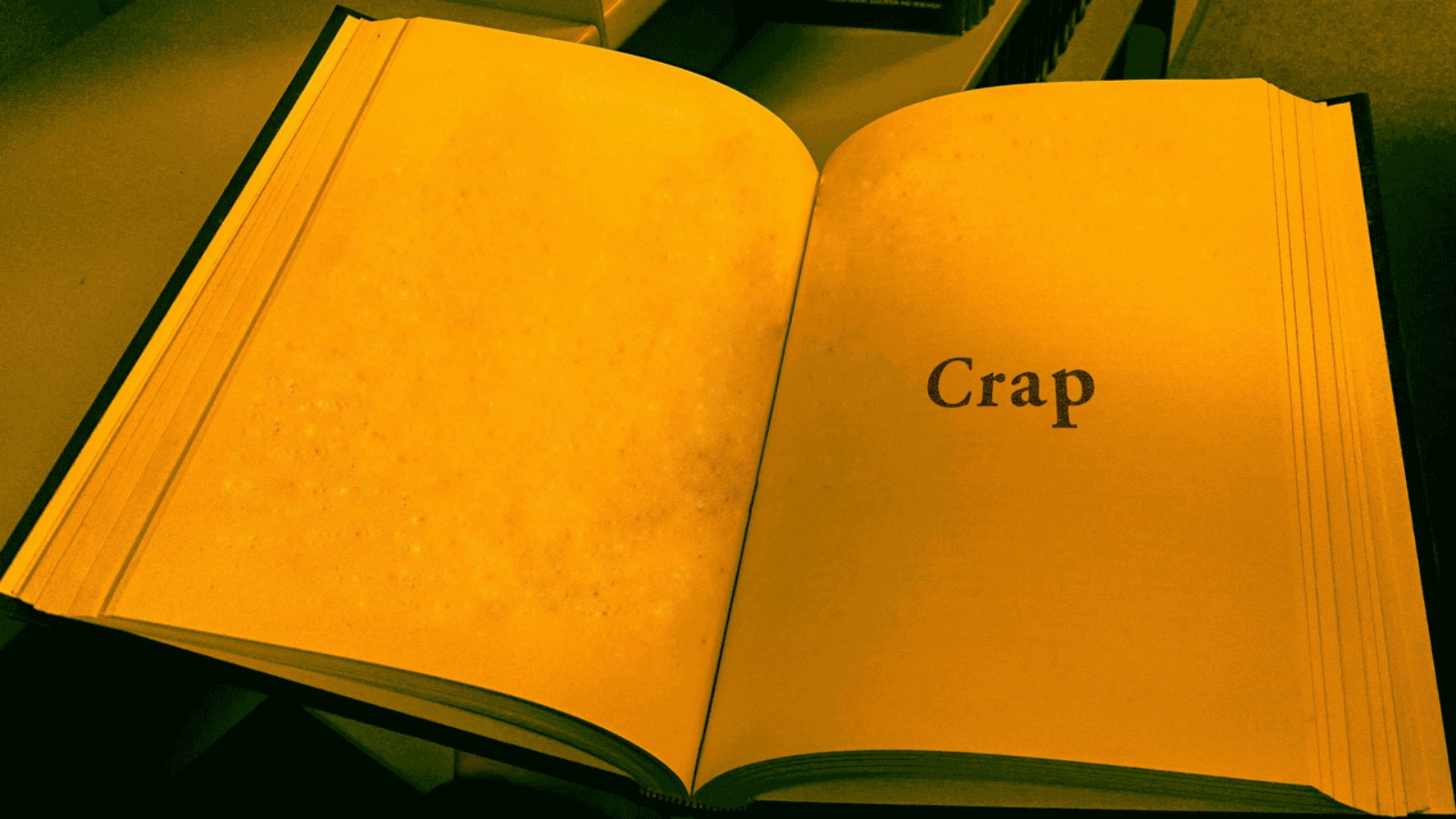 The game is tagged as including nudity and adult content, and it does; I suspect it’s pushing the boundaries of Steam’s current acceptance guidelines. There is apparently an uncensored R18+ version available elsewhere, but there’s no patch for the Steam version. Normally that would immediately affect my review, but this isn’t a boobie game. Though I’d like to see the content that was removed from the Steam version for interest’s sake, what’s here doesn’t really feel as though it’s missing anything important. 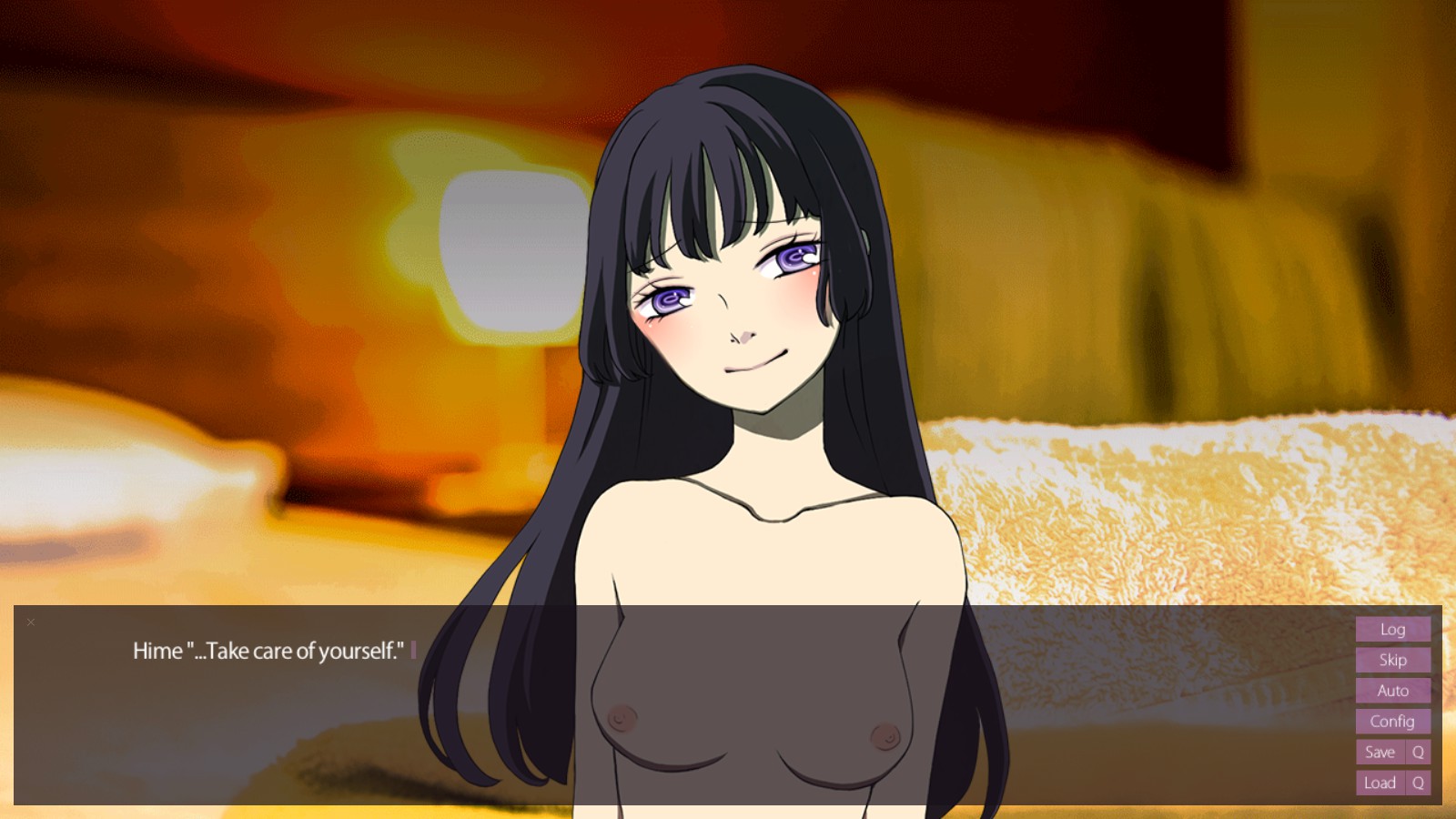 It’s clear that a lot of work has gone into 2236 A.D. and it’s quite a long game by visual novel standards: too long, in my opinion, for the story it tells. I think it will appeal to some, but I found the characters unbelievable, the dialogue unconvincing, and the script confusing and long winded. Some parts of it made me distinctly uncomfortable — which is great! — but mostly it just made me bored. And personally I didn’t like the character art, though the background photos were interesting, when they weren’t too ‘artistic’.

If you managed to watch the long-awaited Season Three of Twin Peaks all the way through then 2236 A.D. seems like the sort of visual novel you might like. Instead of using 10 words to say something it uses 1000 to not quite say it, in an order that doesn’t make much sense, presented in a manner that’s hard to follow. I couldn’t get past Twin Peaks S03E03, and it was a struggle to force myself to finish this. It’s not bad, exactly, it’s just … ‘wanky’. 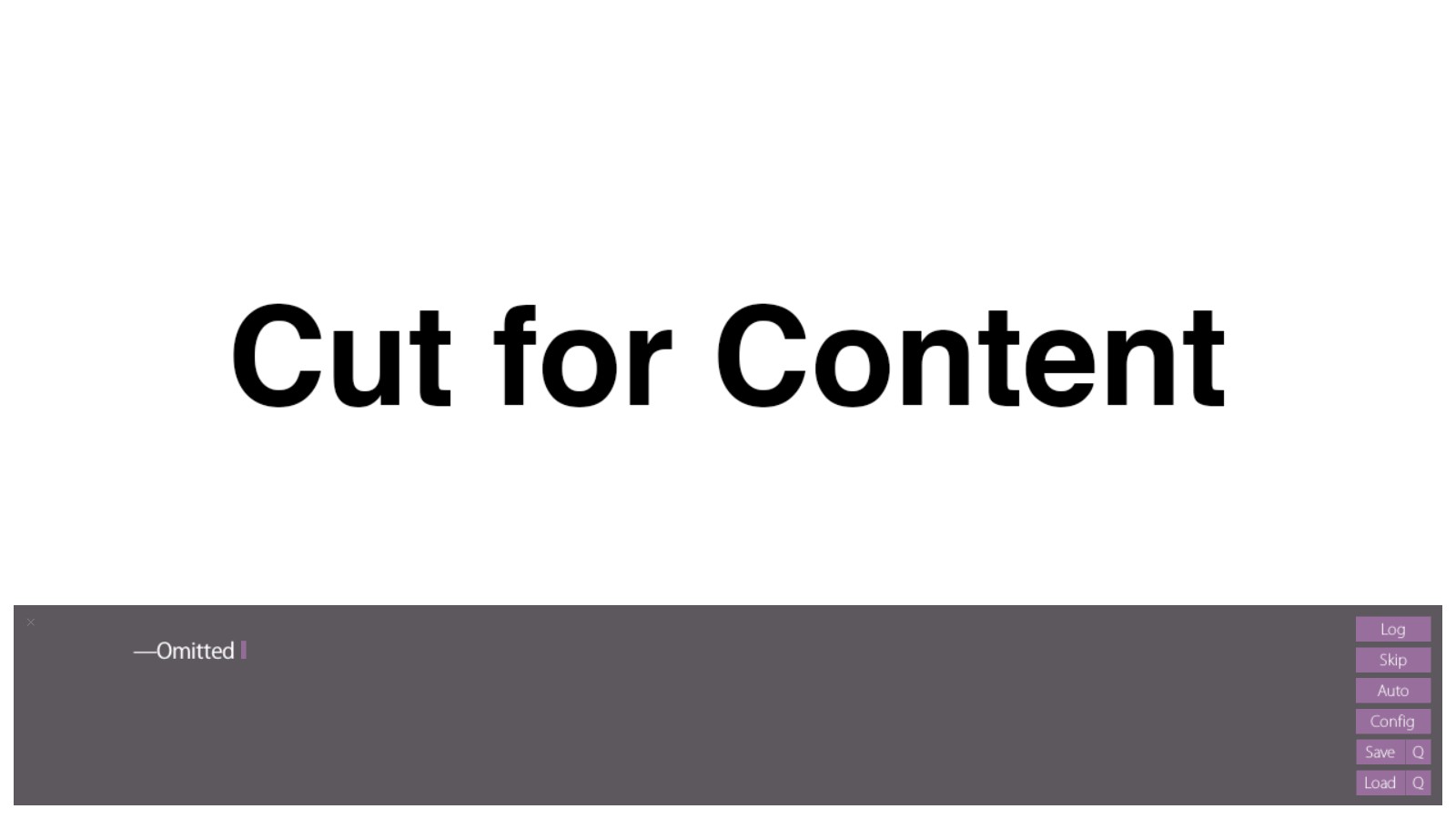