A beautiful, but flawed mini-masterpiece, FAR: Lone Sails has some wonderful scenes coupled with some frustrating bugs.

FAR: Lone Sails is the debut title from indie developer, Okomotive. It’s been on my wishlist for many months, ever since I first saw it in Steam’s upcoming games list, but it’s turned out to be not quite what I expected.

The story behind the game is only hinted at, inferred by the landscapes you pass through while you play, and the scarce inanimate remains of a society that is no more, vanished in some undescribed apocalypse. Even the character you play is mostly hidden from you, leaving you to guess at its age, gender, and appearance beneath the obfuscation of its red coat and hat. I played through thinking that she was a young girl, perhaps 10 at most, but I’m not sure why I thought that; I’ll go with it for now, anyway.

The game begins as she is looking at a photograph, presumably over a grave. Leaving the grave and her home, she ventures out into the world and finds a strange vehicle, an okomotive. This is almost indescribable, like a wooden steampunk bus that a pacifist Mad Max would drive. Feeding anything she can find into the okomotive’s fuel container — which seems to be able to process anything into some sort of glowing liquid fuel — the girl presses various buttons and manages to get the okomotive moving.

Where she is heading is anyone’s guess; the world seems completely devoid of human life except for her own.

The most obvious appeal of FAR: Lone Sails is the impressive art style. The game is rendered in 3D, but it’s a 2D side-scroller. An understated colour palette is used throughout with contrasting bright red for the protagonist’s clothing and buttons that you need to press. You’ll see occasional green or blue in the environment, but generally the colours are muted, even drab, with lots of faded browns and greys. 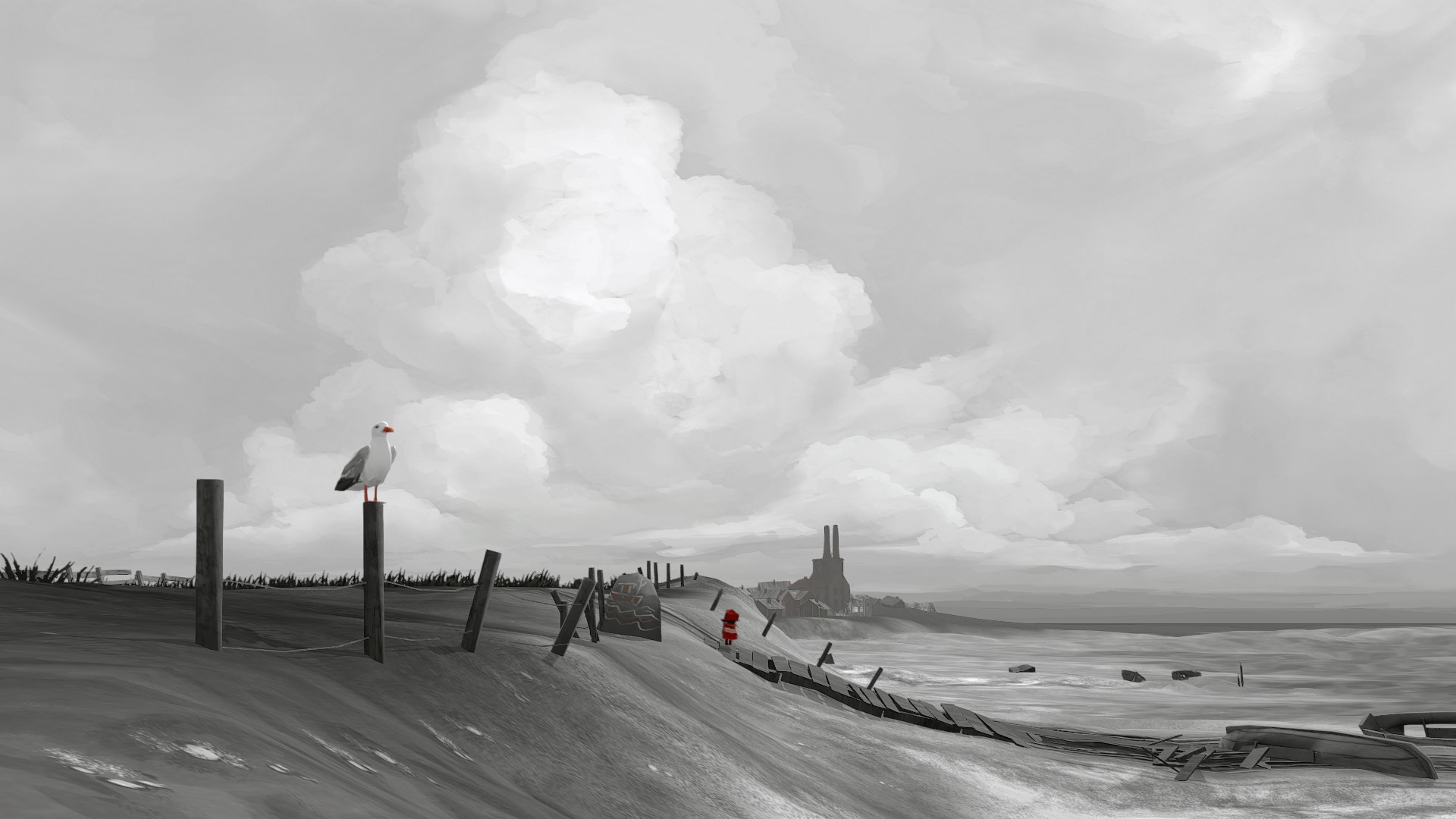 The environment portrays a desolate, uninhabited world in which leftover devices are all that remain, faulty or fallen into disrepair. The attention to graphical detail is amazing, but mixed with deliberate lack of detail in a few places, such as the protagonist’s model: no discerning features are present; she’s basically a walking red overcoat.

The okomotive and the contraptions that remain in use have a great sort of steampunk feel to them. The game relies heavily on physics and you can feel the huge inertia when your vehicle starts to move, while hitting the STEAM button is like a steampunk nitrous oxide. The vehicle comprises a number of separate physics objects, too, so in collisions or other rapid transfers of momentum it is impressive to watch them all individually moving. 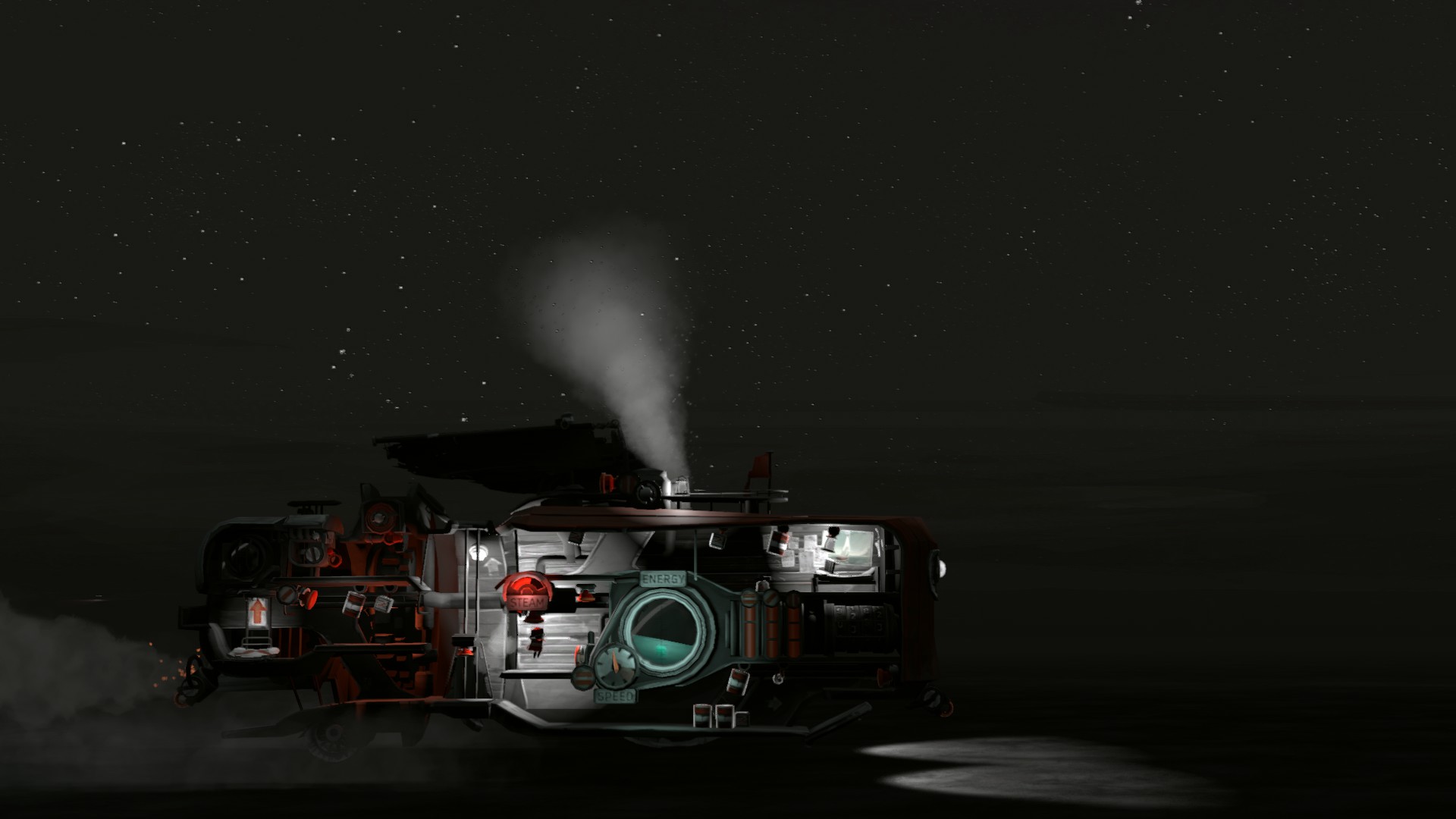 Lighting and special effects are great. Flames are convincing and dynamic lights cast impressive shadows that add to the ambiance. I love the headlight flicker when you power up your okomotive, and the night-time storms are fantastic! There is no in- game UI beyond a couple of temporary instructions right at the start. The pause and main menu are simple and straightforward. 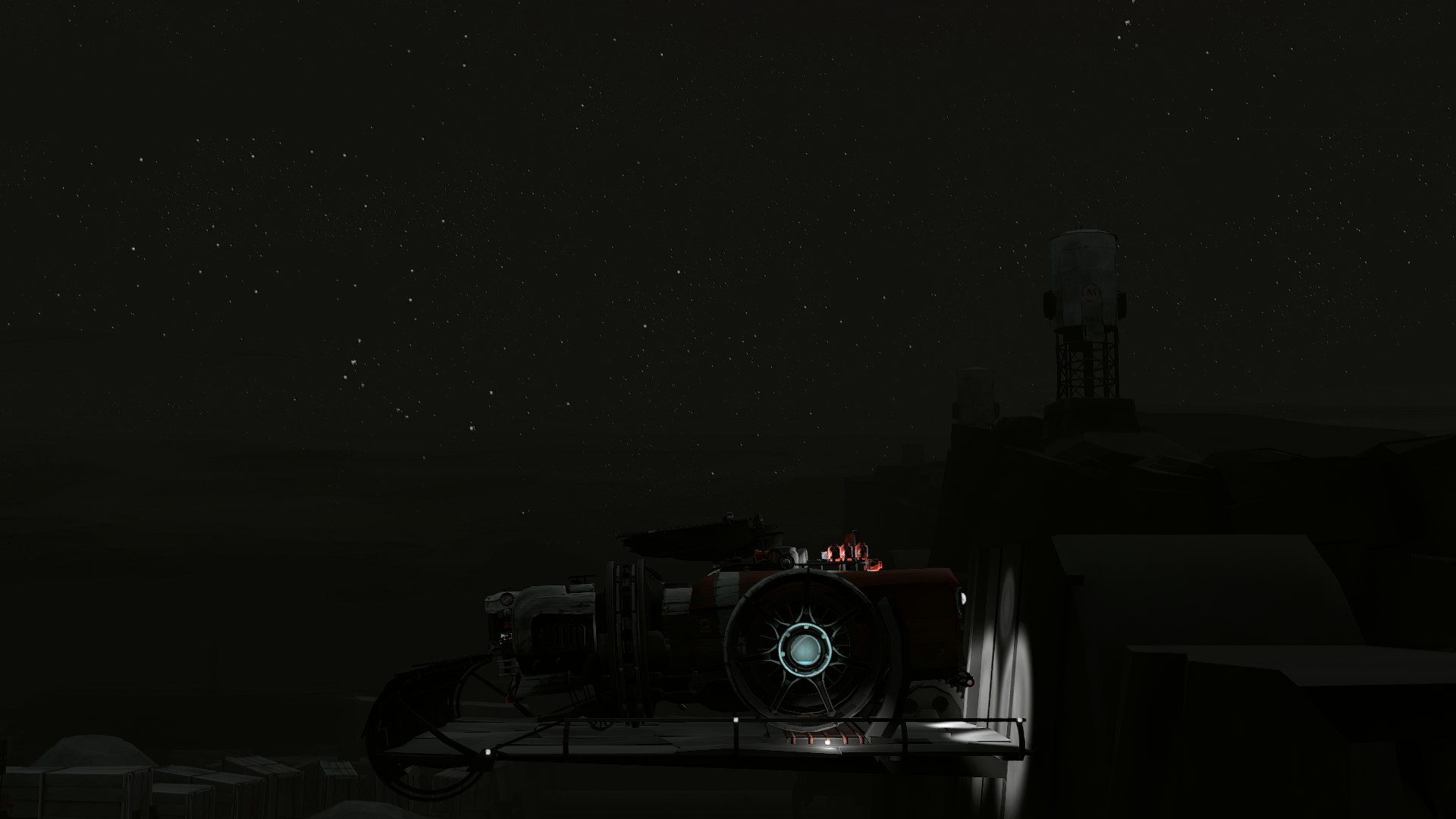 The game’s soundtrack is spectacular as well. The music is lovely and includes relaxing sorts of ambient, uplifting, and dramatic tracks. They’re expertly woven into the story and connected to in-game events; when you first get the okomotive moving the music is perfect! Once you find a radio, occasionally you’ll hear very old-style classic jazz, too, which is a nice contrast.

Much of the game is played without music, too. The okomotive makes all sorts of crazy sounds, like a backfiring steam train, and the environmental sounds are top notch. Weather effects not only look fantastic, but they sound great, too, and change depending on where the camera is positioned. There’s so much going on that when the game does treat you to a few moments of silence it’s almost deafening.

Graphics settings are limited, but the game moves along very nicely; the only performance issues I found seemed to be related to a bug. 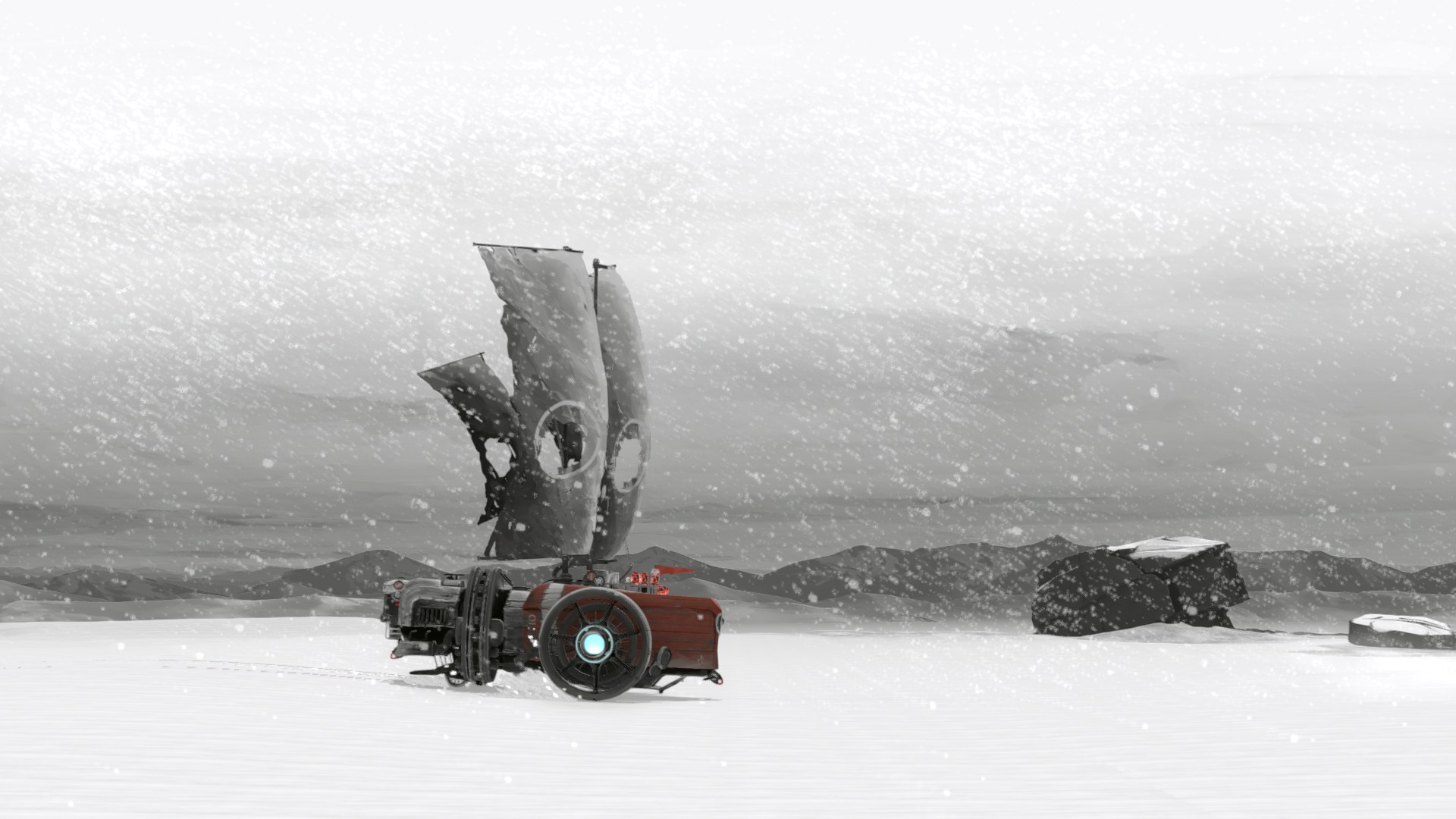 FAR: Lone Sails is a very short 2D side-scroller, focusing on physics and button-based puzzles with a few minor platforming elements. There are no enemies, but the environment can cause your death or destruction of the okomotive. The game isn’t difficult — I think the intention is to focus on the journey rather than the challenge — though the many bugs can make it harder than it should be. 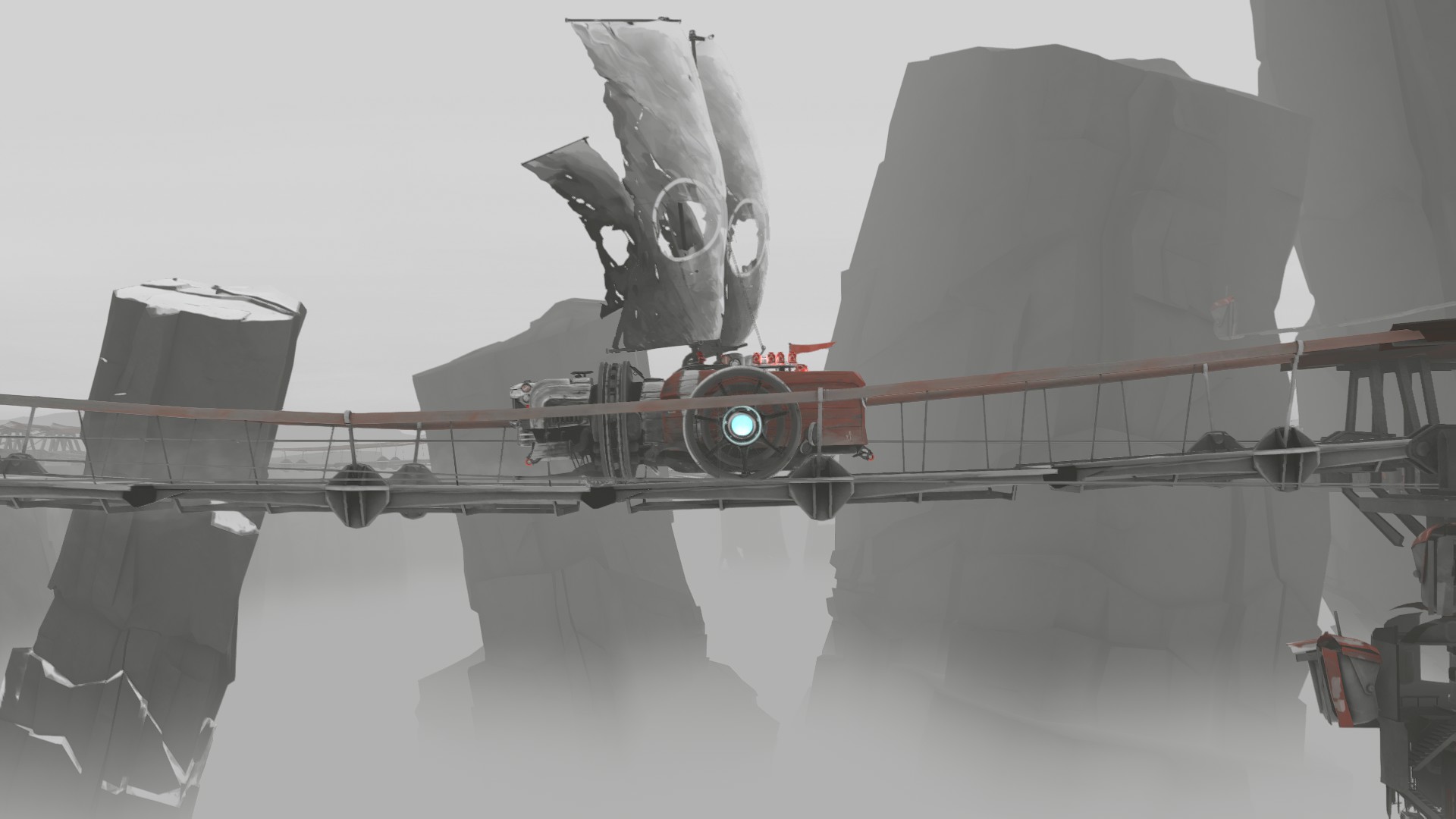 The first 15 to 30 minutes is mostly spent learning the simple controls and familiarising yourself with the okomotive. The game doesn’t provide any hand-holding beyond telling you how to move and which button to press to pick up objects, so you must learn how the okomotive works. There’s also no text in the game, beyond an occasional billboard, poster, or sign making up part of the background in front of which you travel, so it’s left to you to understand what you’re doing and try to make sense of why. That aspect of the game works surprisingly well; after the first few minutes of confusion I really appreciated the game’s pacing. 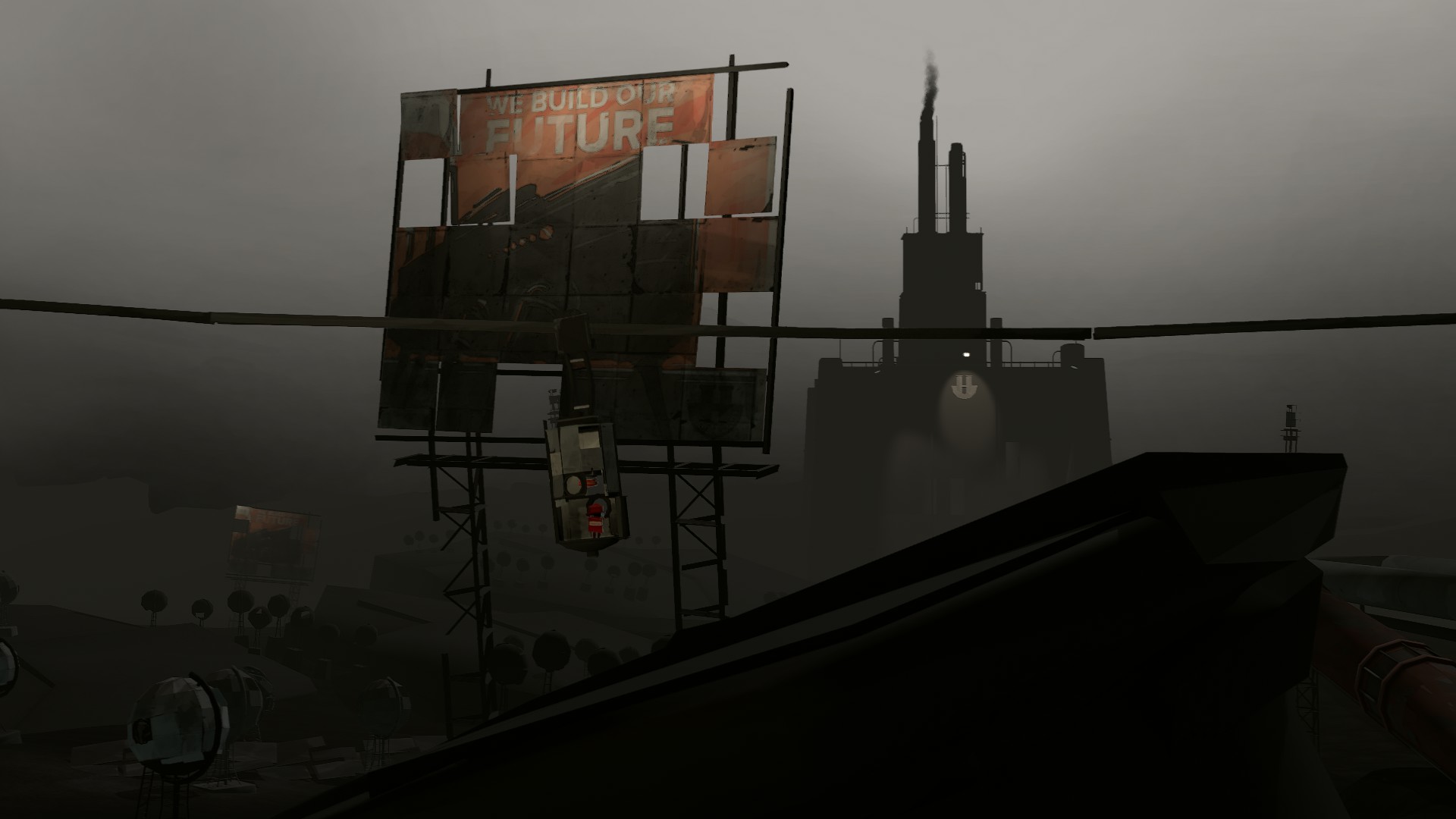 The basic tasks are essentially the same throughout the game, however, leading to a feeling of repetition even in such a short space of time. You’ll spend half the game feeding collectible objects into the okomotive’s fuel converter or pressing the ‘go faster’ button, and the other half solving simple, if nicely designed and presented, button-pressing platformer puzzles. There’s not much variation. 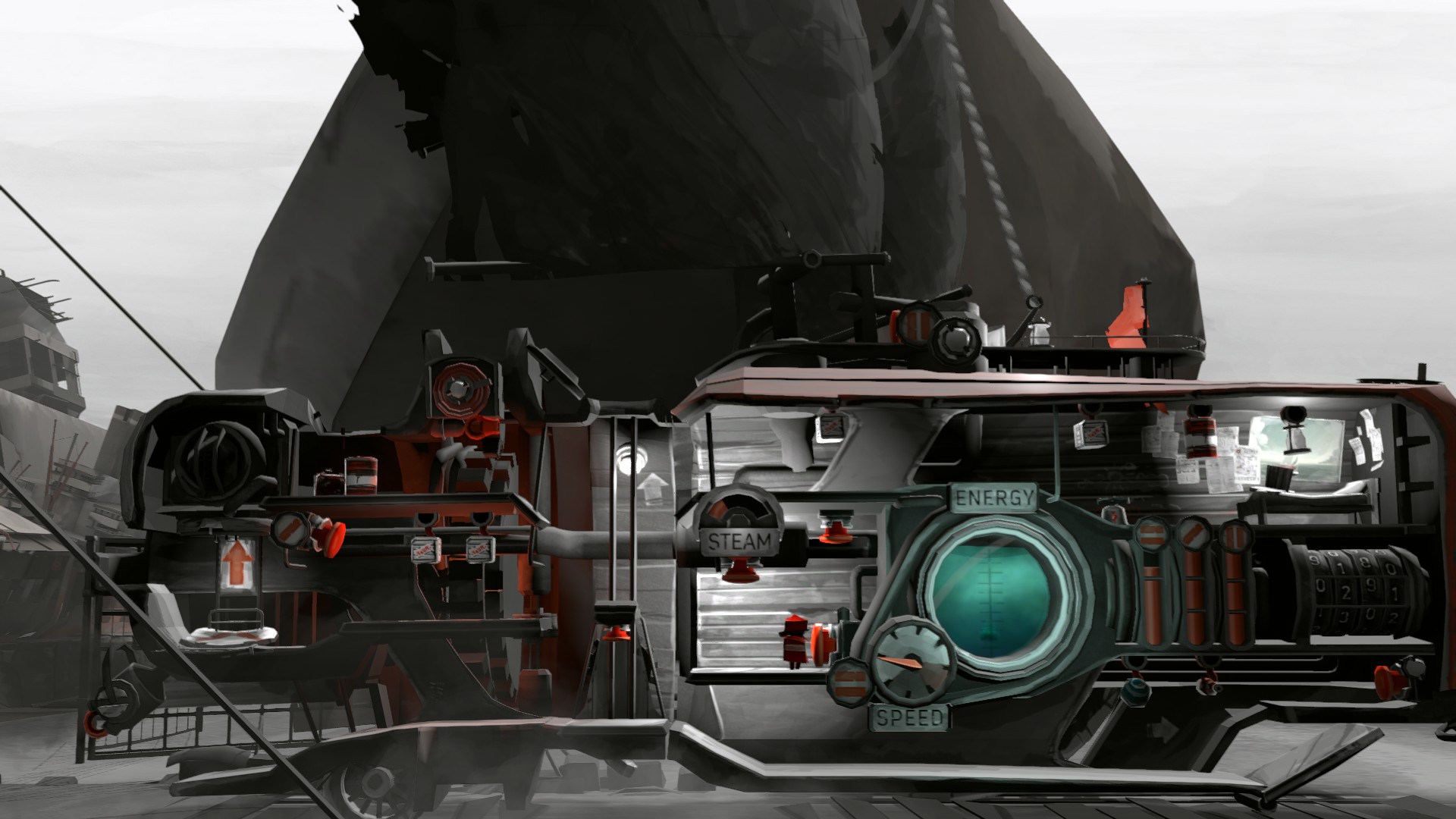 The game is also rather buggy. I think I finished my first play through in around three hours, but over 45 minutes of that was spent dealing with bugs. That’s an unacceptably high proportion.

The most common issue I encountered was at any of the barricade ‘checkpoints’, where you have to gather speed in the okomotive and use its inertia to smash your way through. Often this simply didn’t work. No matter how many times I tried the barricade wouldn’t break. Apparently this is quite common and the standard advice is to reload the previous save and replay the section before the barricade again, and most of the time this works. At one point, though, I thought I must have finished the game, as nothing I did would let me break through. After reloading previous saves over and over it finally worked, though; I think it took me four attempts.

Other issues included the vehicle endlessly falling through the terrain on a save (reload a previous one to fix), the game reverting to a 1 FPS slideshow on loading (I had to reboot to fix), and a number of strange physics issues including the player character being blown upwind harder than I could walk (so I became stuck on the right of the screen; reload to fix), the wind sometimes not affecting the okomotive’s sails until you lower and re-raise it, and the wind not affecting the okomotive’s little red flag until you raise the sails, at which point the flag suddenly springs to life. 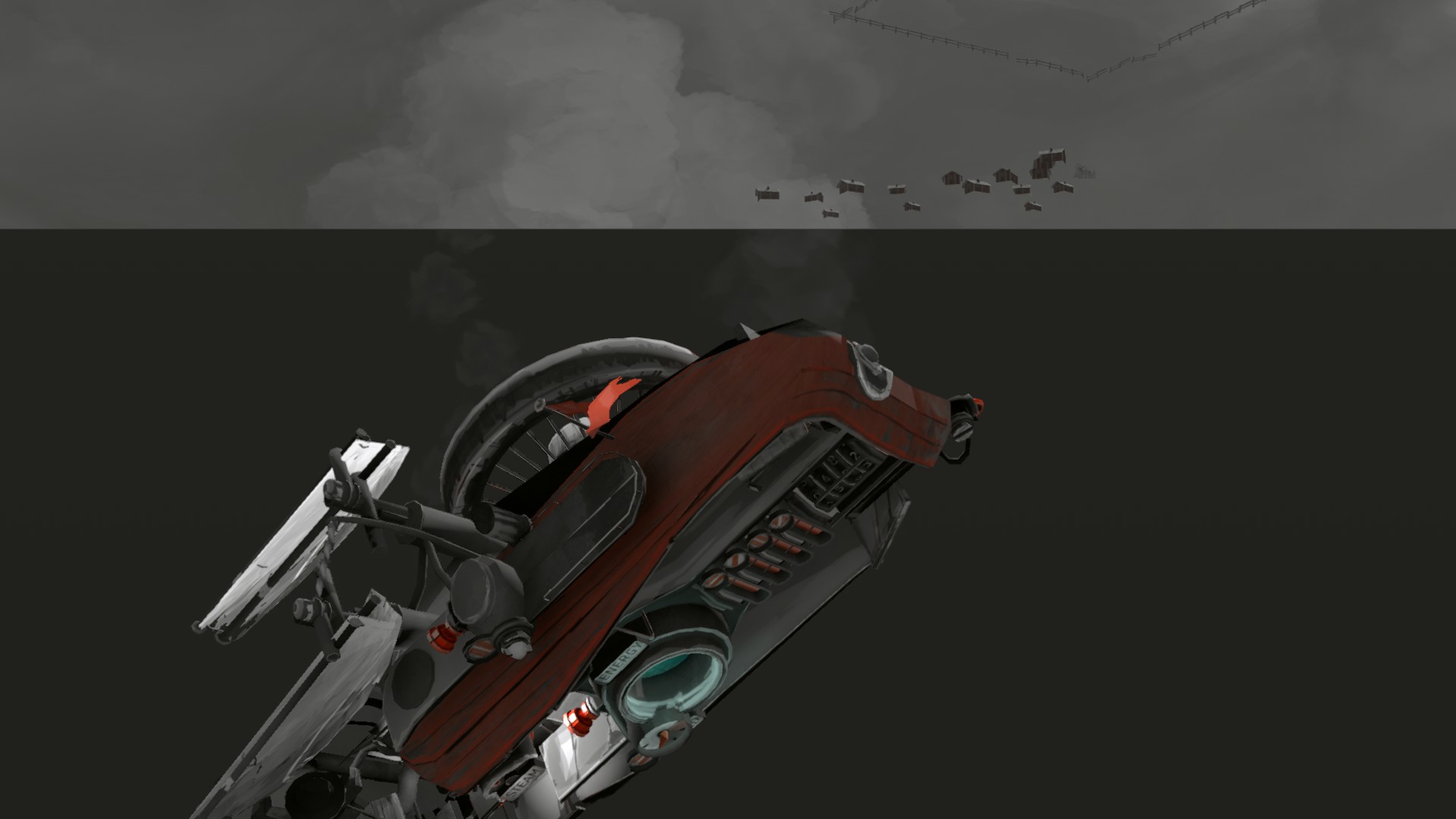 Controller support is provided, but there seems to be no way to remap controls. It’s possible to get yourself stuck, unable to return to the okomotive or move it either, requiring a reload. I’m not sure if the achievements all work; I thought I unlocked two at the end of my second play, but only one of them is shown. And the brakes sometimes disengage by themselves, though this may be a plot device. 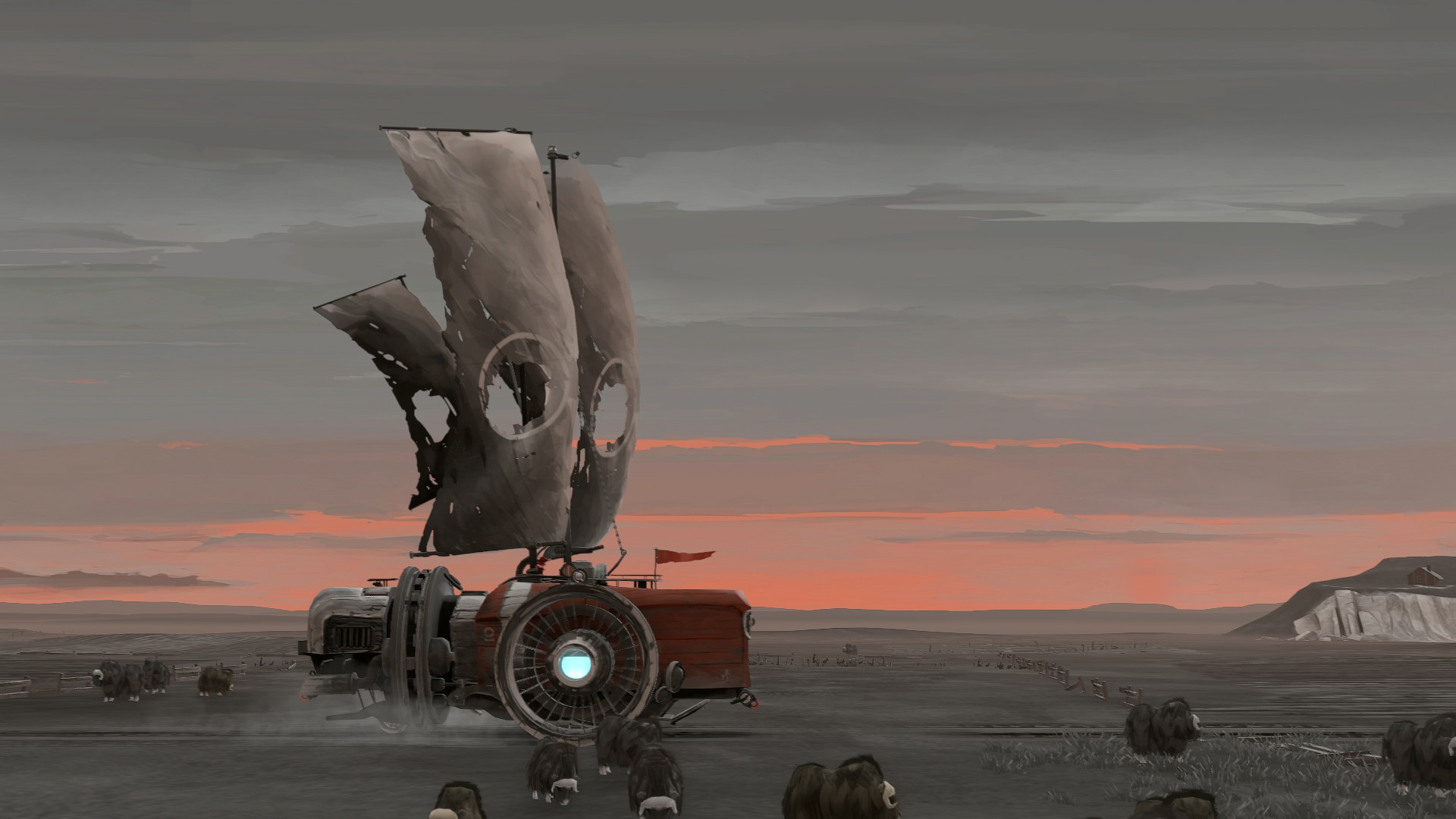 FAR: Lone Sails is a beautiful game and I’m glad I was able to experience it, but it’s marred by bugs. Combine the bugs with the very short play time and I think I personally would have been a bit disappointed had I paid full price.

If you have some spare cash and think you would appreciate its atmospheric, if rather melancholy journey, then it’s worth a look, but if your gaming wallet is tight then you might want to wait for a sale.