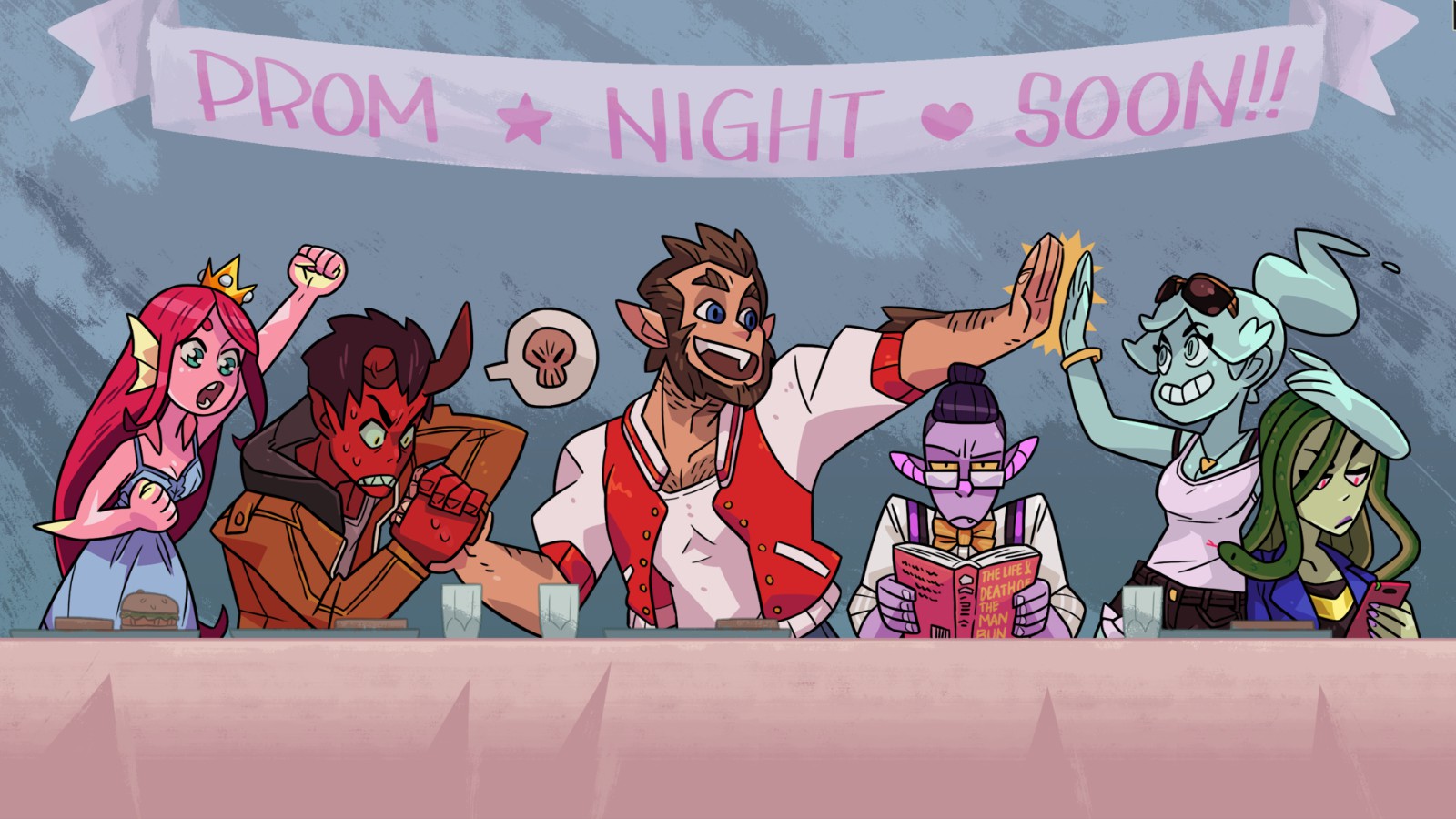 Should I vouch for this guy or ruin his chances for a Prom date? Oh, what the heck; I’ll vouch for ya, dude! +2 Charm

Ah Prom: an event that is constantly talked about as the single most important event that can happen to you. An event that I didn’t even go to as it was not something I personally cared about, and I hold zero regrets for not going. Yet, having the chance to go to Prom with a monster, while being a monster myself, was something I could not pass up.

There are a few weeks till Prom is here and, lucky for you, six of the best classmates don’t have a date! Just go in there and try to win their affection, and perhaps you’ll be Prom dates for life. Or you’ll be rejected. Just choose whether you want a short or long game, pick your character from the four available, and get right to it! 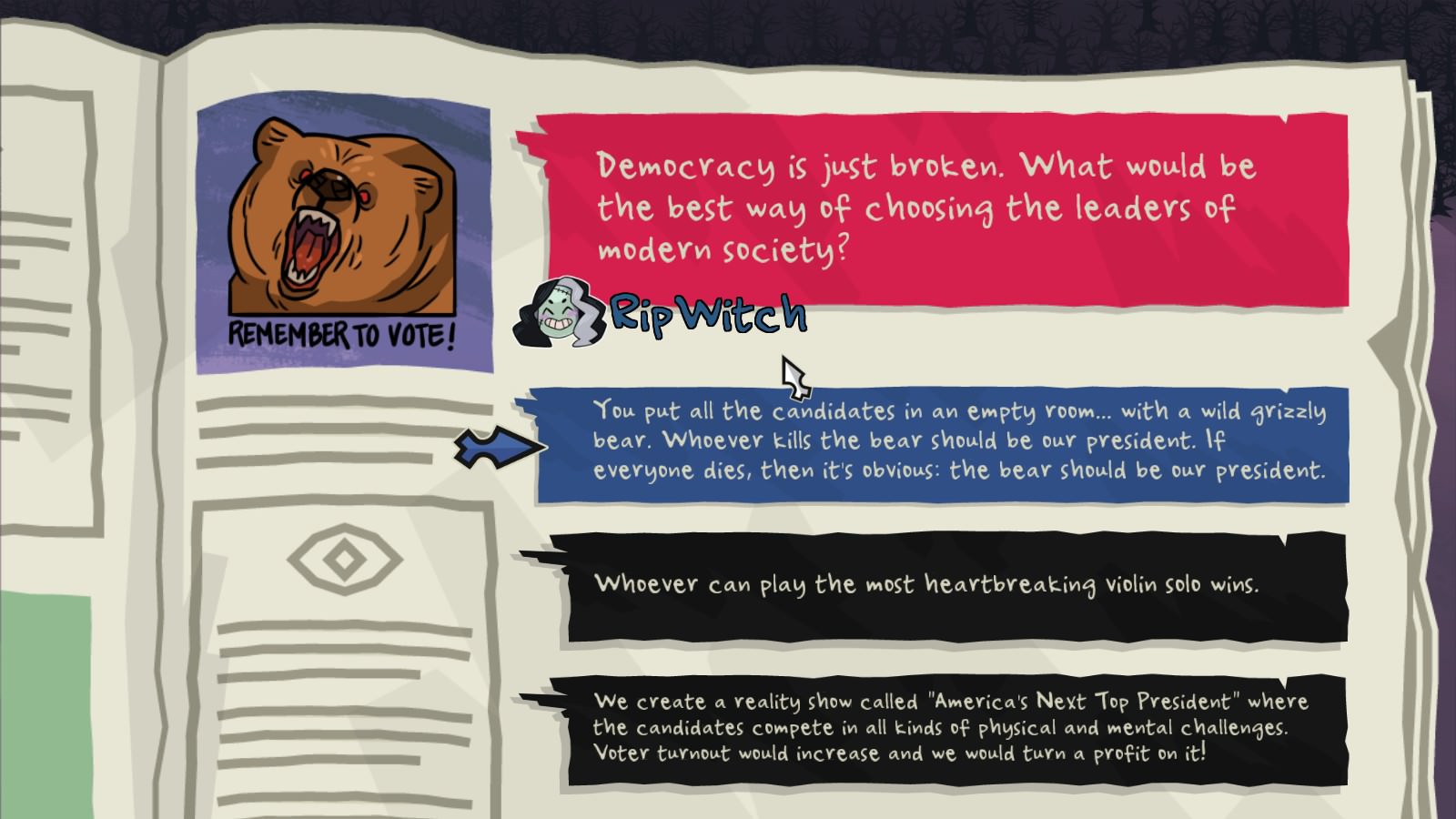 To start off, you are given a quiz with three randomly chosen questions that decide your beginning stats and the love interest with whom you share an answer. Of course, once you know which character likes what, and how the stats correspond with the answers, you can answer in a way that provides you with exactly the outcome you want.

With the quiz done, it’s time to go to school. 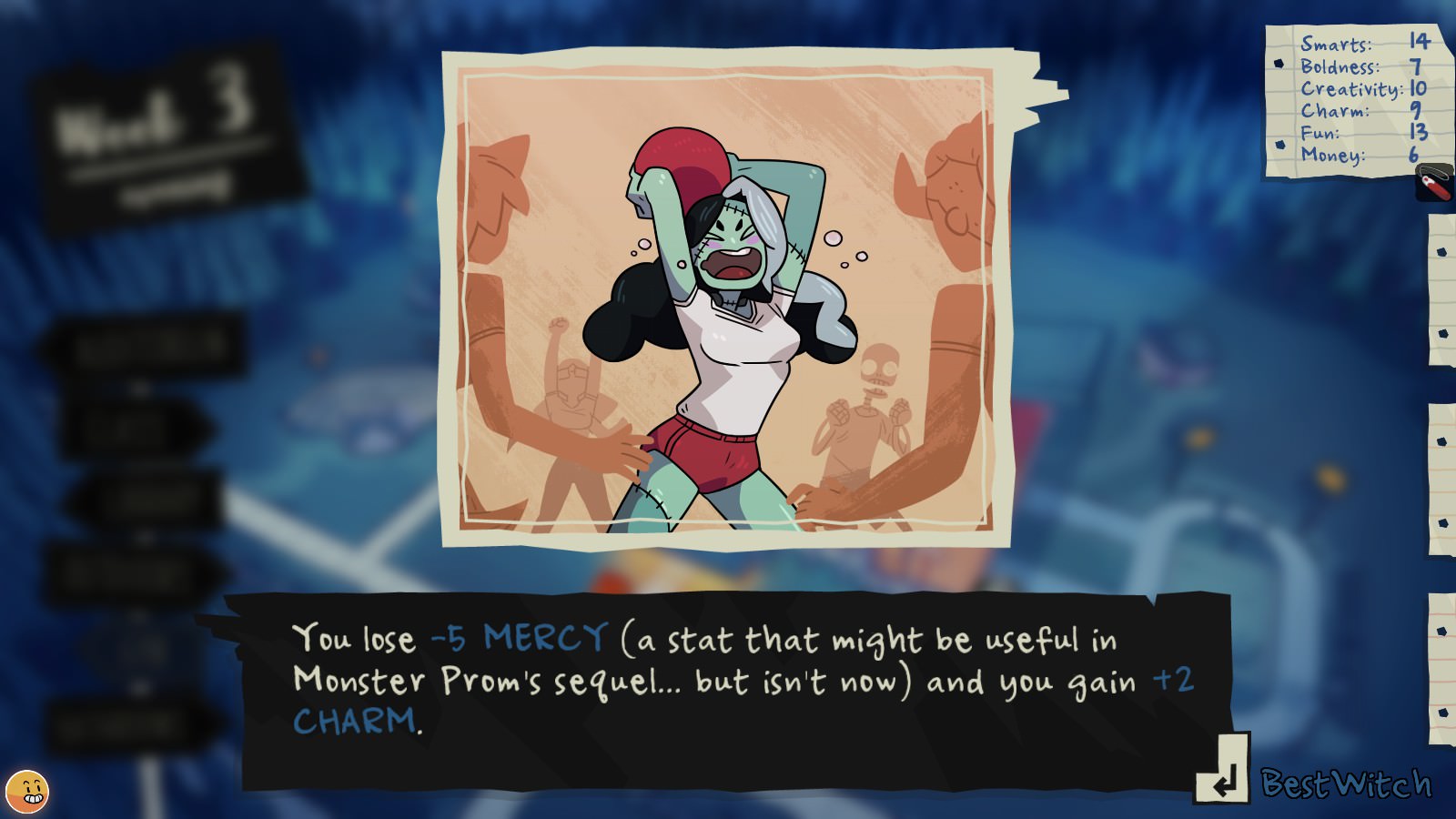 During each class turn, you have six areas to visit, each of which grants you a specific stat boost. Need more charm? Go to the gym. The shopkeeper also does her rounds, so make sure you know where she is so you don’t accidently pick that location unless you want to go shopping instead of improve your stats. Each visit you are given some text telling you what happened, and afterwards you may run into one or more of the love interests. Which love interest you run into depends on who shared the answer you picked in the quiz and, later, with whom you have the most affection points.

These encounters, which can also include side characters, vary greatly. Towards the end of each encounter you are faced with two choices corresponding to one of your stats. If your stats support the choice you make then you get a positive reaction and gain further stat boosts, but if not then the character dislikes your response and you get stat decreases. It can be hard to determine the correspondence between choices and stats, but once you get more acquainted with the game and how it works you can better predict the outcomes. 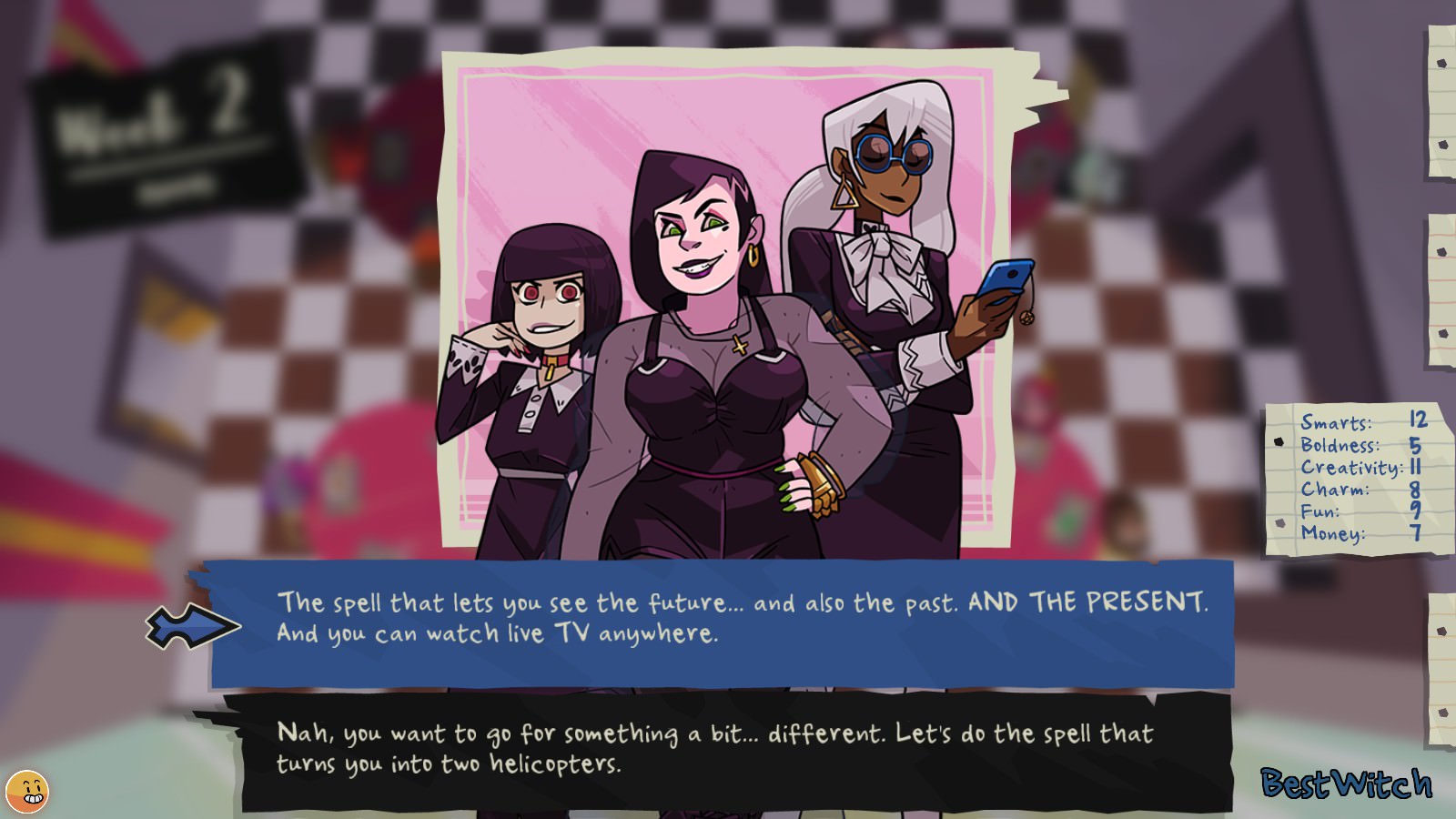 Once per week you also have a lunch turn, in which you can sit with your love interest, a side character, or the shopkeeper. Sitting with your love interest and making a choice that he or she likes increases affection towards you, while sitting with a side character gives you a chance to increase one of your stats by double the normal amount. Sitting with the shopkeeper lets you buy an item during lunch so you don’t have to use a school turn to do so. 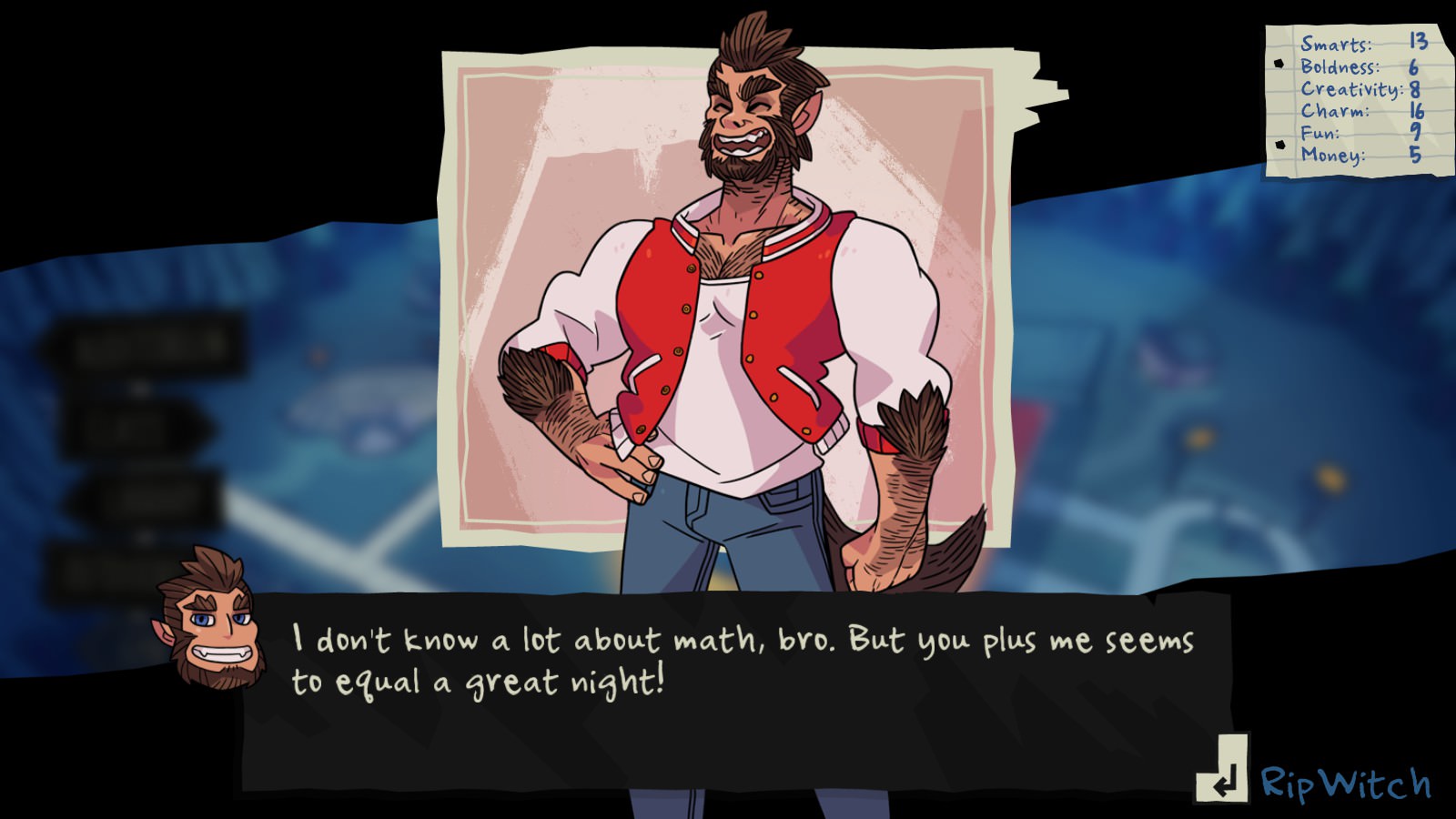 Towards the end of each game, as Prom draws nearer, you are able to ask your love interest to go with you or you can just go alone. There is a catch though: the main six characters do not just say yes to you. Each character’s interest in you is based on how many affection points you managed to accrue and also the stats that they prefer. The stat requirement can be a bit tricky. You can also choose to go alone and if you have high enough stats you will have a fun time by yourself. As the game ends, the credits show Polaroid pictures of scenes involving the characters, both in and out of school. If you achieve a special ending, you have the possibility of also being graced with a special Polaroid with writing on it. 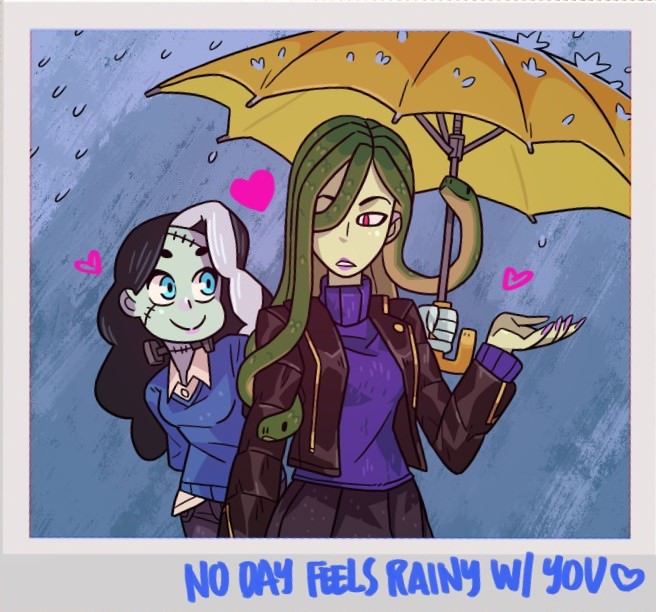 There are 22 secret endings, along with a lot of events and outcomes. Most of the event items have to be unlocked, requiring you to play and get more dates, but don’t forget to also get the normal endings as they also unlock items. Let me tell you, these endings are totally worth going after, especially the super-secret ending. 😉 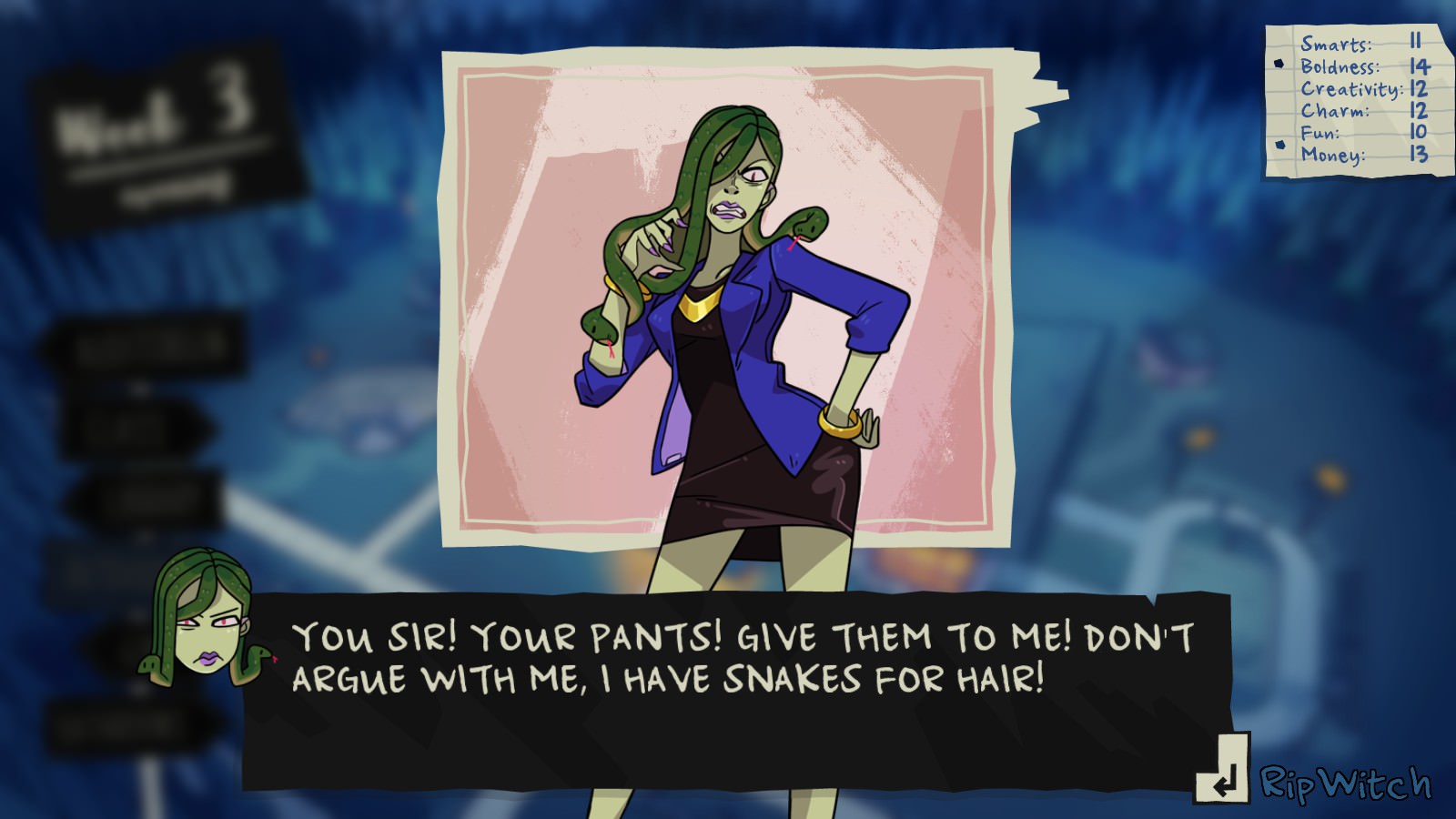 So how are the characters? They are fantastic and each one has a unique personality and a specific list of interests. Even the side characters have more personality than what you might think. They all have some likability to them and there is at least one character that you will love even if you don’t love all of them. Paired with the hilarious writing, this makes Monster Prom a great game to read and try to fully complete.

The art style is fantastic and certainly captures how this is a light hearted and hilarious game. Everyone is just too cute despite all of them being monsters. The music also screams “monsters!” The ending credits song, though, has to be my favorite and certainly is a surprise and a great way to end a run. 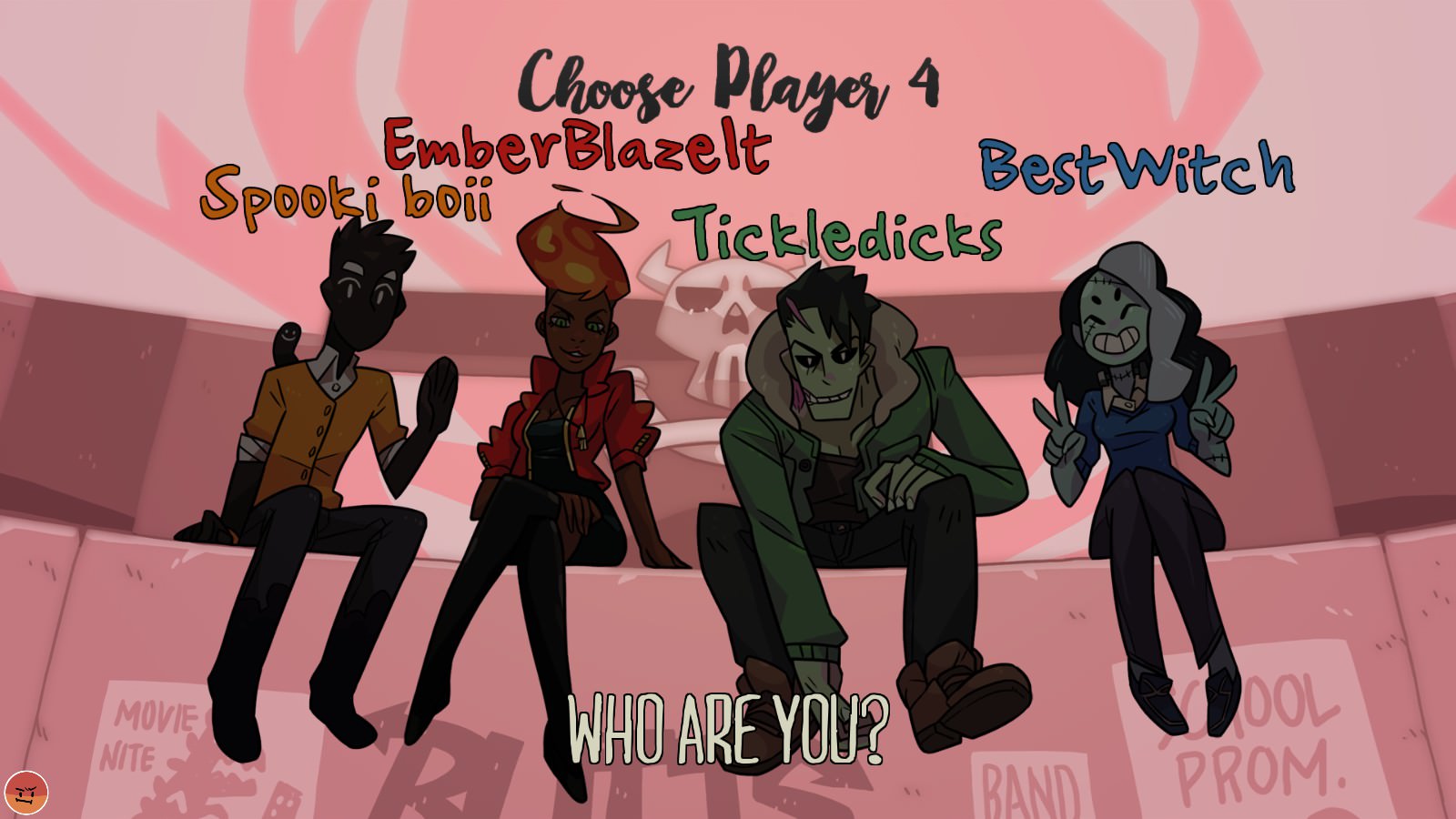 Multi-player plays the same as single-player, but this time you have other people with you. Instead of being able to go anywhere you want or need, the other players are also competing to get where they want to as well. Once someone picks the bathroom for example, it becomes closed off to the other players. This also happens during lunch, and with two main interests per table, well someone may sit where you want to because their interest is there. From this, it may seem that the last person is severely disadvantaged during the whole game, but after each turn everyone switches places, either letting the game randomize places or selecting the challenge option. The challenge option gives a prompt to all the players with the best answers receiving higher placements. 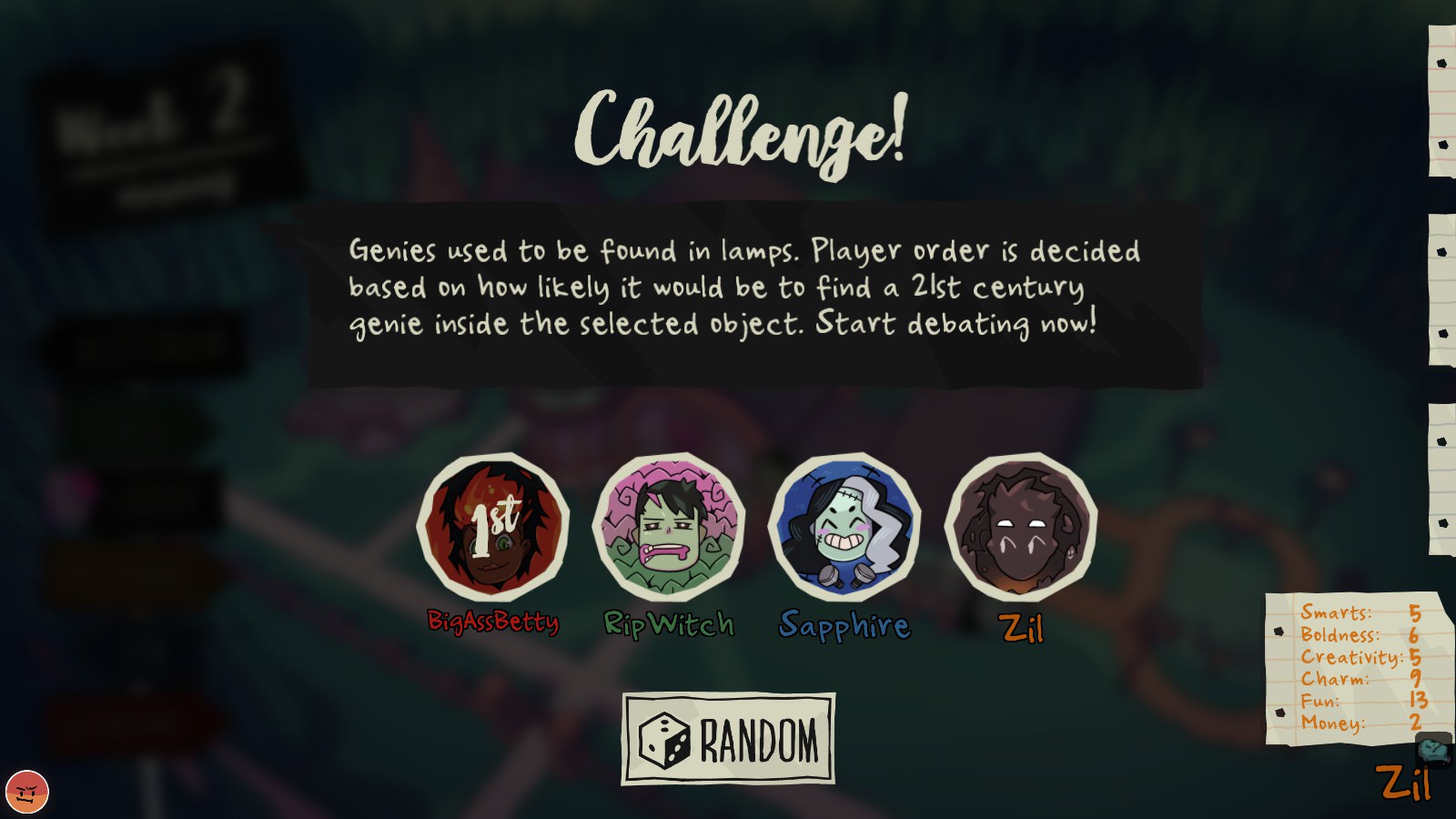 In addition to the regular gameplay, there are extra events called weekend events, which only happen in multi-player games. A player is randomly chosen and an event happens to them, but it typically involves information about the other players as well. For example, the event could call for picking the player with the highest stat, or confronting the player with another player’s interest and asking them questions that can affect both players’ progression with that character. As all players see each event, this can be quite awkward, especially if you choose to ruin another’s chances with one of the characters. 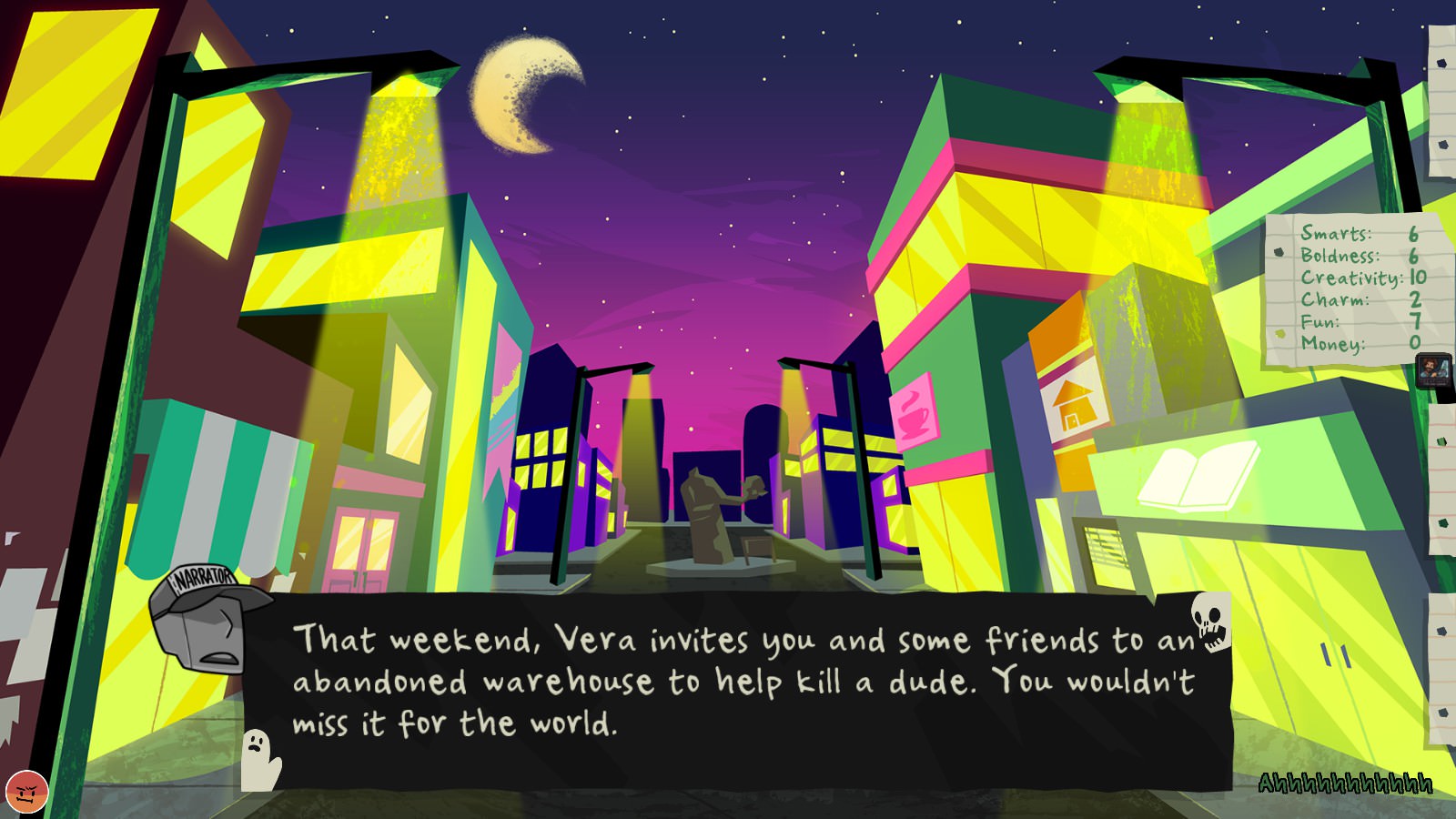 The best thing about multiplayer is that you get everyone talking during their parts (either just during their turns or voice acting specific characters) and reacting to what happens, or even someone’s name that weirdly fits perfectly in the situation they’re in. For what is a competitive game, it’s very friendly; you can even get games where others will actually help you in picking the choice for which you have the stats. Even though the only bugs I’ve encountered have been in multiplayer, I still think this can be even better than playing alone, even if you have a chance at coming across a bug. 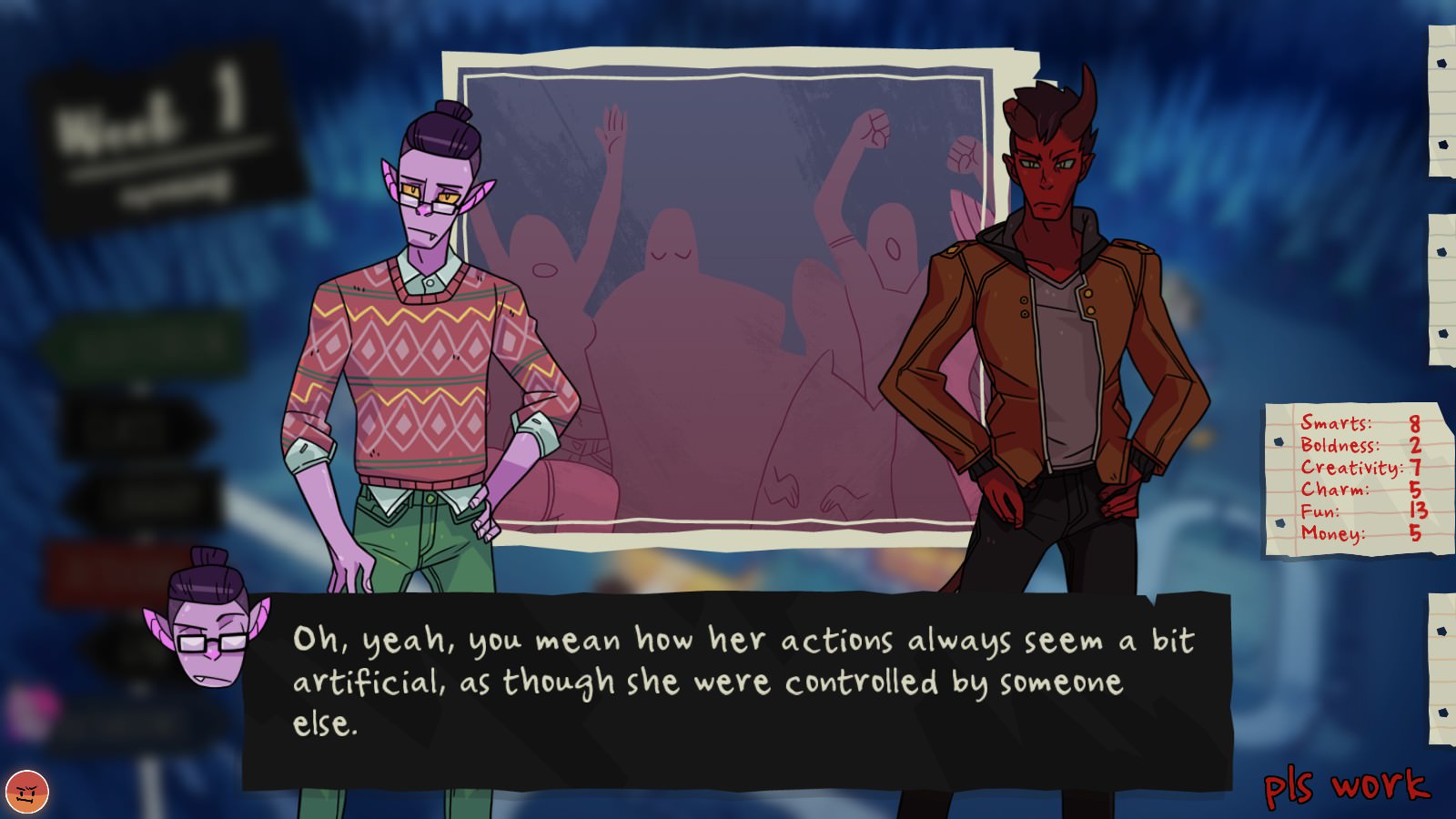 Monster Prom has to be my favorite game of the year so far. I just couldn’t stop playing it or thinking about it until I had seen all the endings. I was so enamored that this was the main source of fueling my procrastination during both my finals essay (don’t worry, I turned it in on time!) and this review. The writing, humor, art, and characters just sucked me in, and that was exactly what I was hoping would happen after seeing the trailer.

Definitely pick this up! Monster Prom is beyond worth it even if you’ll most likely play it only by yourself. If you don’t have anyone to play with, check out the game’s discord server and you’ll likely find people wanting to play, like I did. 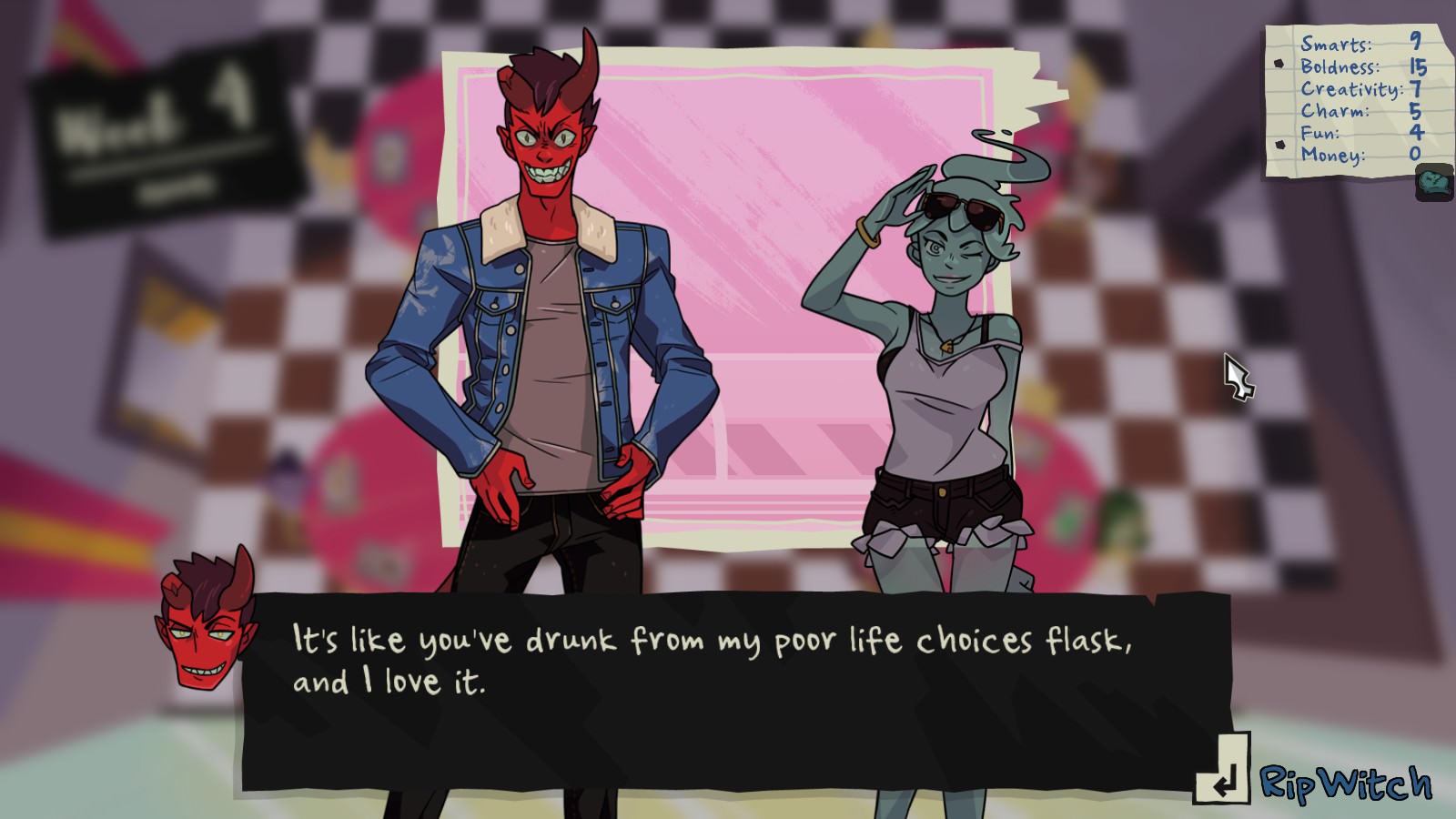