Starship Corporation is an incredibly intricate, deep, and varied spaceship design simulation / management hybrid that can deliver great satisfaction if understood, but it is not a game for everyone and I recommend it only to veterans of this sub-genre for its degree of complexity.

Starship Corporation is a very deep and complex spaceship design simulation and management game hybrid. Players can choose from either the campaign or sandbox options, finding themselves at the helm of a powerful starship building company in the golden age of technology. As the CEO, you will have to manage various aspects of the company such as investments in research, budgeting for each financial quarter, deciding what priorities the company wants to focus on, signing business contracts with other entrepreneurs, managing what company ships are doing in open space to bring more profit, and a wide assortment other things I will describe more further on in the review. Overall, I found myself almost overwhelmed with the depth and complexity this game involves. It is definitely not a title for beginners or casual players, but rather a hardcore simulator suitable only for enthusiasts and veterans of the management and construction simulation genres. 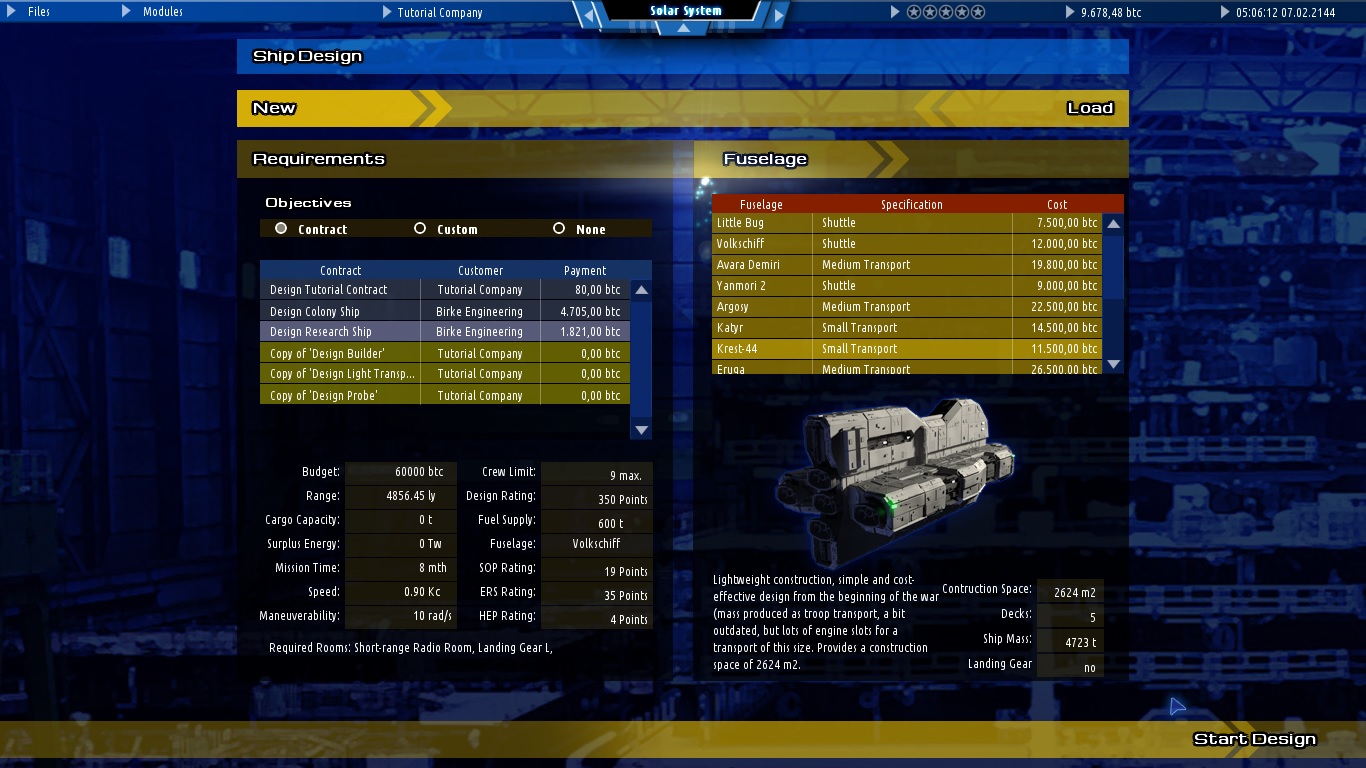 General Gameplay
The amount of content to convey from the gameplay of Starship Corporation is enormous, but and I will TRY to fit it all in here.

After a rather long but very detailed and well made tutorial, you will be catapulted into interplanetary business, and that definitely is a rough place to be. As I said before you will have to manage multiple aspects of the company via various interfaces and menus. The first of them is the Galaxy map where you can see all the known sectors of the Milky Way and look over the shipyards in them. Shipyards are essential for doing business as they allow you to fulfill contracts with customers which require you to design a ship suited for a certain purpose. You can build as many shipyards as you want provided you have the money to maintain running them. Using the galaxy map you will also be able to send the ships your company privately owns , the ones you did not sell to customers, in various tasks such as mining operations, combat, and exploration and scientific research. All this goes towards company profit in form of money for mined ores, new sectors discovered, and extra research technologies. Of course, during a task many things can go wrong, so your ships can very well be lost in space after encountering a wide range of hazards.

When you accept a contract for a customer, the ship he requires you to design will have to fulfill certain requirements called Ratings, which are calculated by a series of tests done after the ship has been designed, in the crew management section. These tests are composed of a long series of individual missions that cover various simulated events, such as collisions with asteroids, fires on board, malfunctions of any kind, and even combat and warfare. All these tasks can be managed manually, meaning you will control the crew itself in every situation as in an RTS game, planning their paths around the ship, seeing what has to be repaired and how soon in a multitasking frenzy. You also have the option to leave these tests to be done automatically by the computer as it evaluates your ship structure, efficiency, design, facilities, and crew to assign a score. If the ship passes the tests required by the customer contract, then that’s it!

Ship design is the main feature of the game and is considerably complex. First of all, when designing a new ship you’ll have to select the hull. There are various hulls for different purposes such as transport, military, racing, exploration and so on. After selecting the hull, an isometric 2D view of the ship will be available and it will be up to you to decide what facilities go where inside the ship’s multiple layers, considering efficiency, practicality, and the customer’s needs. It is really a complicated business. Everything needs to be powered, connected by hatches for the crew to move around. There are a plethora of subsystems and additional modules, and even more will be available after researching them from the research interface. Also, you will have to bear in mind quality of life on the ship, as everything requires maintenance once in a while. This means ships with overly convoluted designs will give the crew a hard time repairing everything efficiently. Oh, and of course, there are energy requirements such as oxygen, food, water supplies and more. Luckily, there is a convenient list of everything OK or not OK on the ship that you can use as reference to understand what needs to be done.

Research is fairly simple. From a menu listing various research branches, such as weapons, hulls, propulsion, etc. you can choose what branches to invest in, and each passing turn (quarter) that sum is invested in research, boosting it toward a new available item.

During the campaign or sandbox modes you CAN go bankrupt if your debt surpasses a certain amount, so basically if you run out of money, you lose. Profit is at the center of your objectives.

Content
Sandbox mode can provide an indefinite amount of content, but the campaign doesn’t skimp on things to do either. Given the very sandbox nature of this game, I’d say it can last for as long you enjoy building new ships and making new contracts.

Challenge
This is a very complex game suitable for veterans of the business simulation and building simulation sub-genres, its challenge is High. 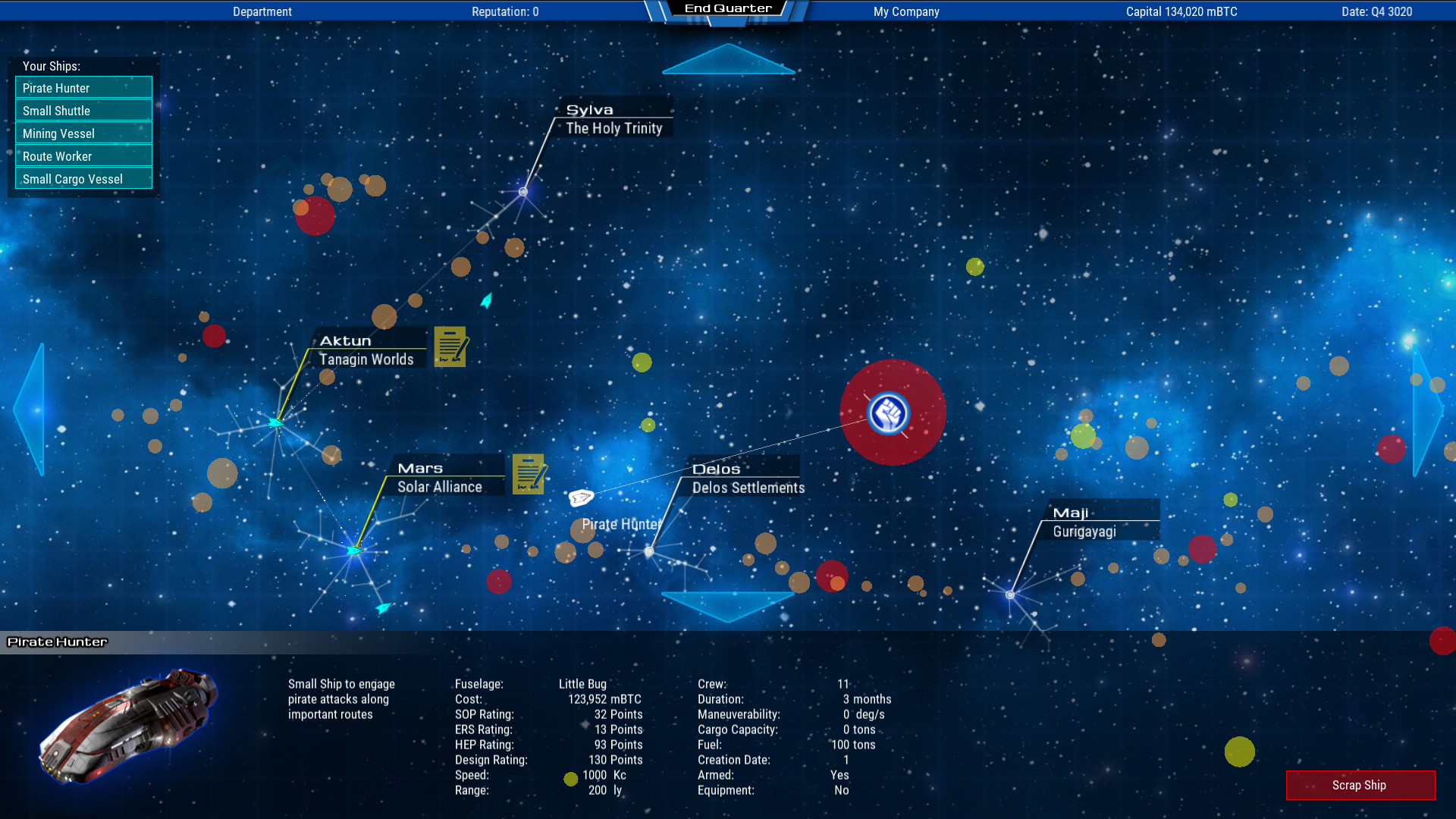 Graphics
The 2D overview of ships is well made and pleasant while the UI and overall interfaces are also pretty good. For being a game that totally does not rely on graphics as a main feature, it doesn’t do a bad job.

Sound
An average sound compartment with nothing standing out.

Performance
For some unknown reason, the game drops to 20-15 FPS while in ship design mode at random. Other than this, nothing else.

Quality of Life
Menus are generally good enough and do the job, some mechanics and commands are a bit obscure and the tutorial doesn’t explain them well enough, such as hatch opening/closing. But overall, good enough. 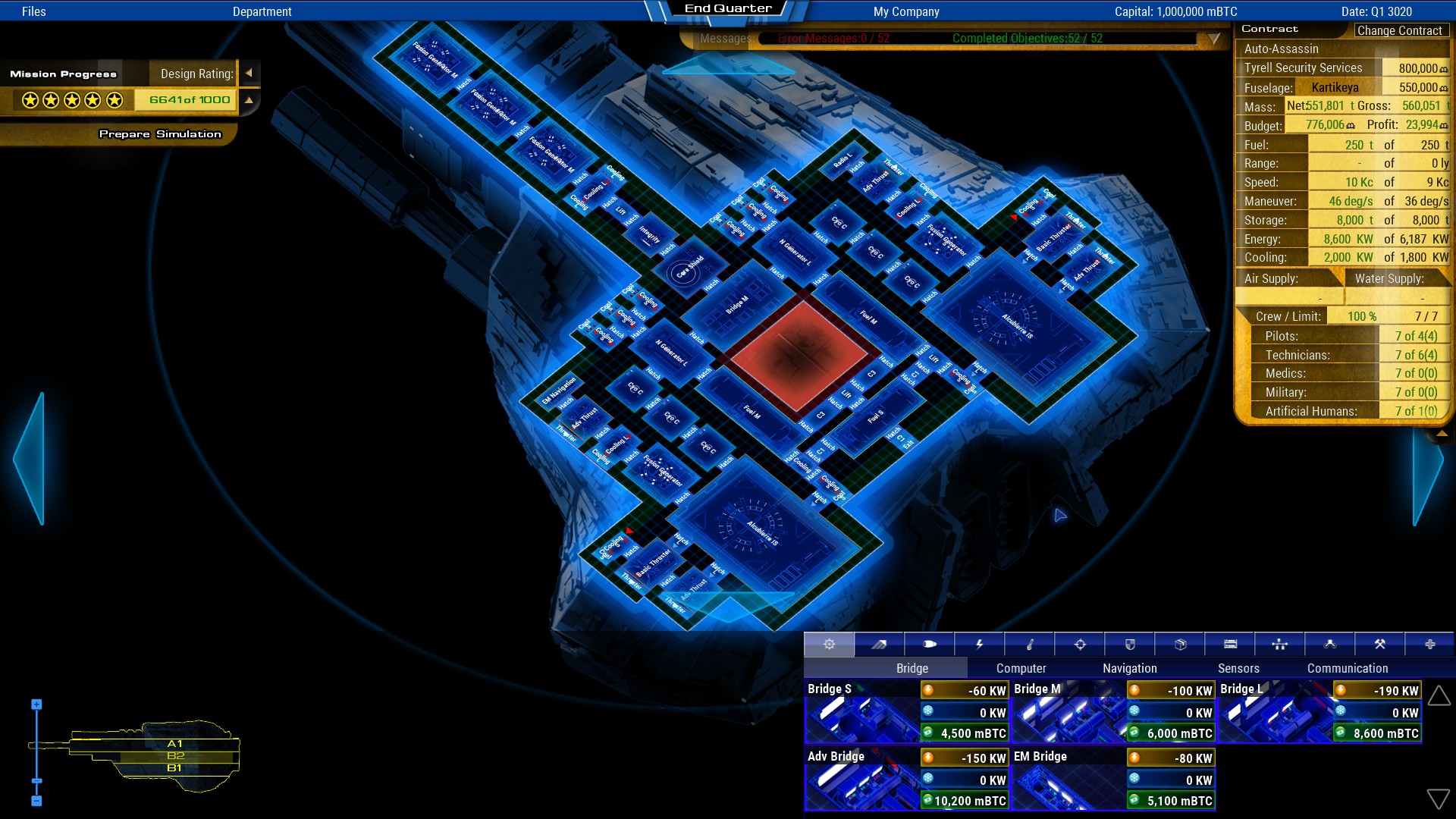 Starship Corporation delivers well in the main gameplay components of this sub-genre and is very well done in many aspects. Still, is not a game for everyone and I’d suggest it only to fans of these type of titles.