The Spatials: Galactology is a cute space colony sim with a heavy focus on production and logistics that sadly falls short in a few areas.

The Spatials: Galactology is a science-fiction colony management simulation from indie developer, Weird and Wry. It’s the successor to The Spatials, which I haven’t played.

The game is set far in the future. Humanity has formed the Human Federation and reached out into space. An alien species, the Crusantians, has become our ally, and together we seek to expand across the galaxy, forming a vast network of trade and tourism. Your task is to lead the faction responsible for this expansion, The Spatials, beginning with building their home station.

Your task is made easier by the eager young officers at your disposal, whom you can direct to build, research, explore, and establish trade routes with the settlements you discover. But it’s not all fun and adventure; you’ll also need to manufacture trade goods and supplies to keep your station running in tip-top shape, as well as the logistics chains to support them, all while trying to keep everyone happy, productive, and safe.

The game is played from an isometric viewpoint from a camera with a great zoom range that you can pan freely. The graphics have something of a retro feel to them, with relatively simple textures and little in the way of fancy effects and advanced features. 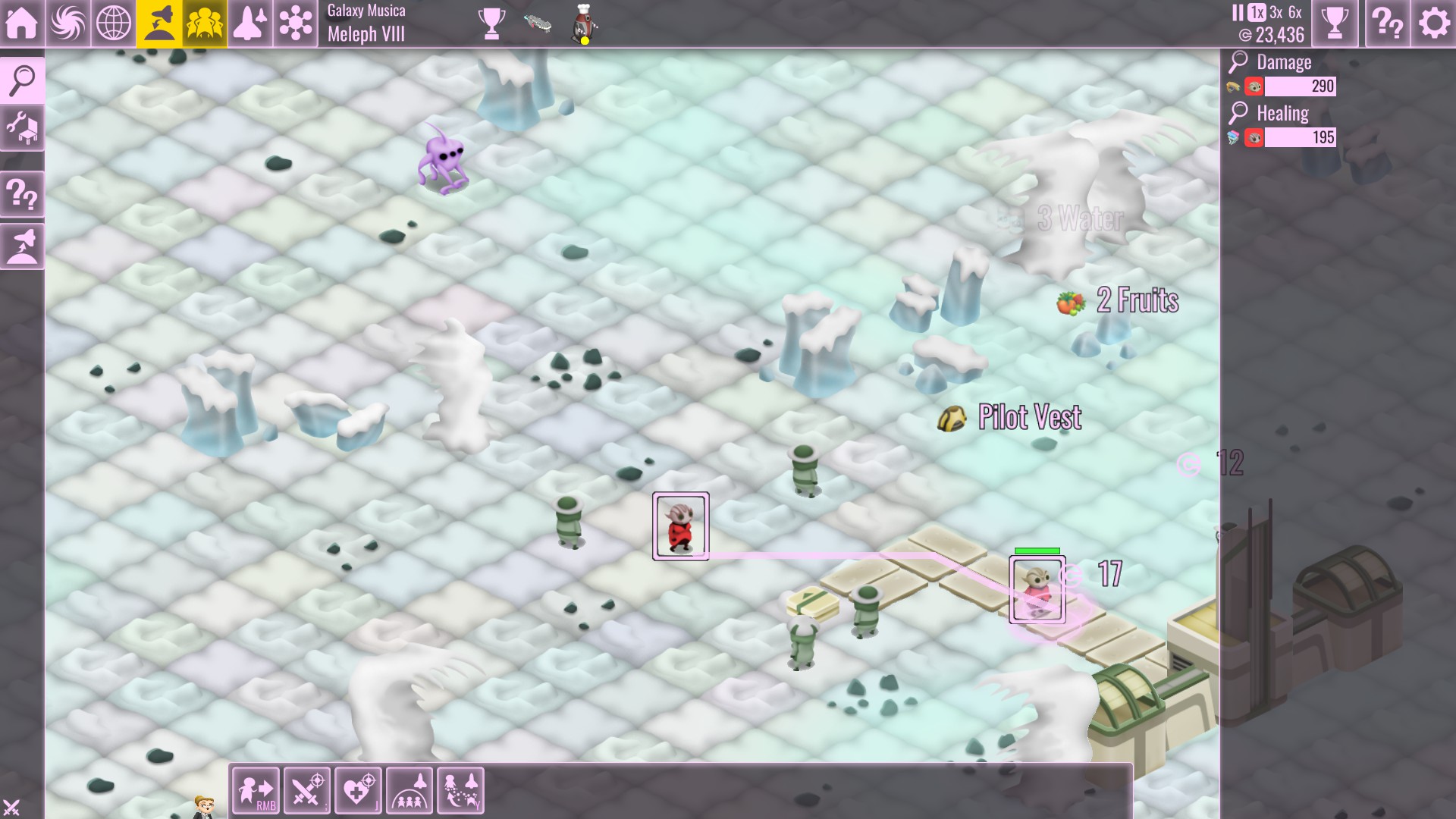 The Spatials and aliens — both intelligent and otherwise — are cute little character sprites that are drawn and simply animated facing any of the four cardinal directions. At maximum zoom they look rather personable and you can easily see species differences, while fully zoomed out they’re little more than a few colored pixels moving about. The Spatials all start out as Redshirts, but experienced officers are color-coded based on specialization. Animations are very basic and most equipment makes no visible change to the sprites, which is a bit disappointing, though there are at least a few different weapon effects. 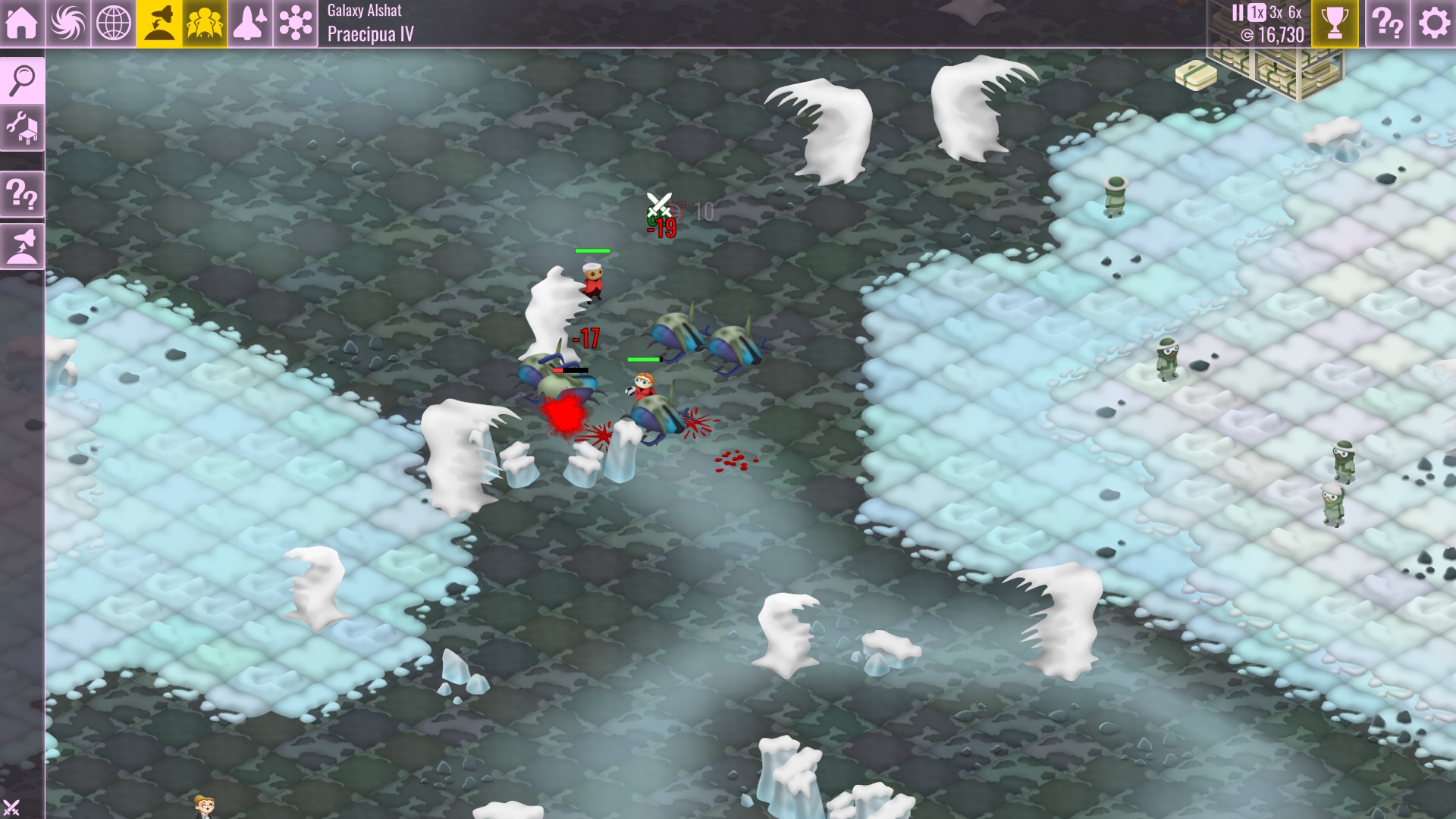 World graphics have great variety, with each different biome featuring a number of tile types, and the huge range of floors, decorations, and other objects available to build in your station allowing you to customize the appearance of your base to your personal preference; there are oodles of different tiles and textures available. The space ship bridge screen looks great and the galaxy map looks nice, but the ship icons moving about it look pretty bad. 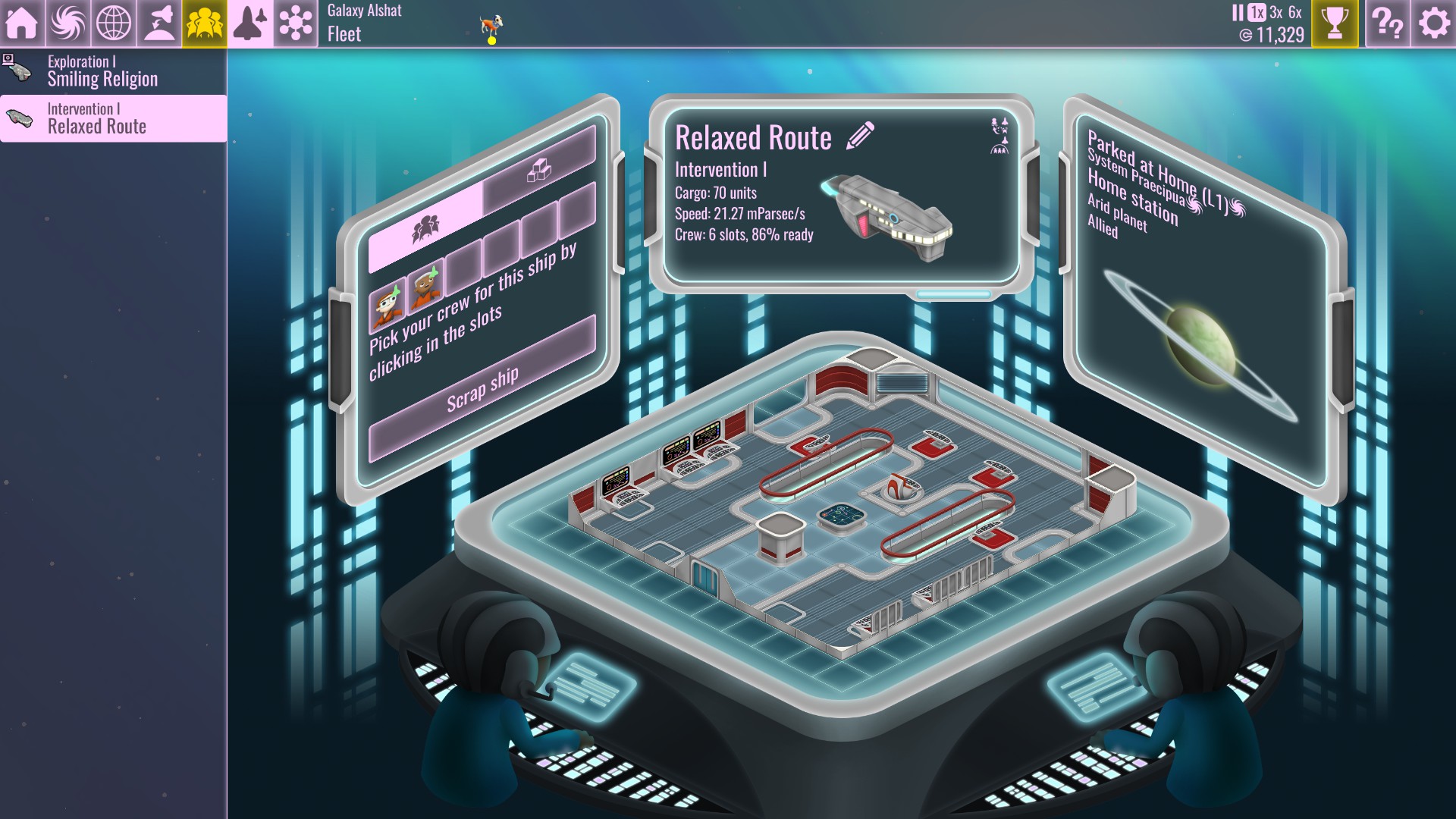 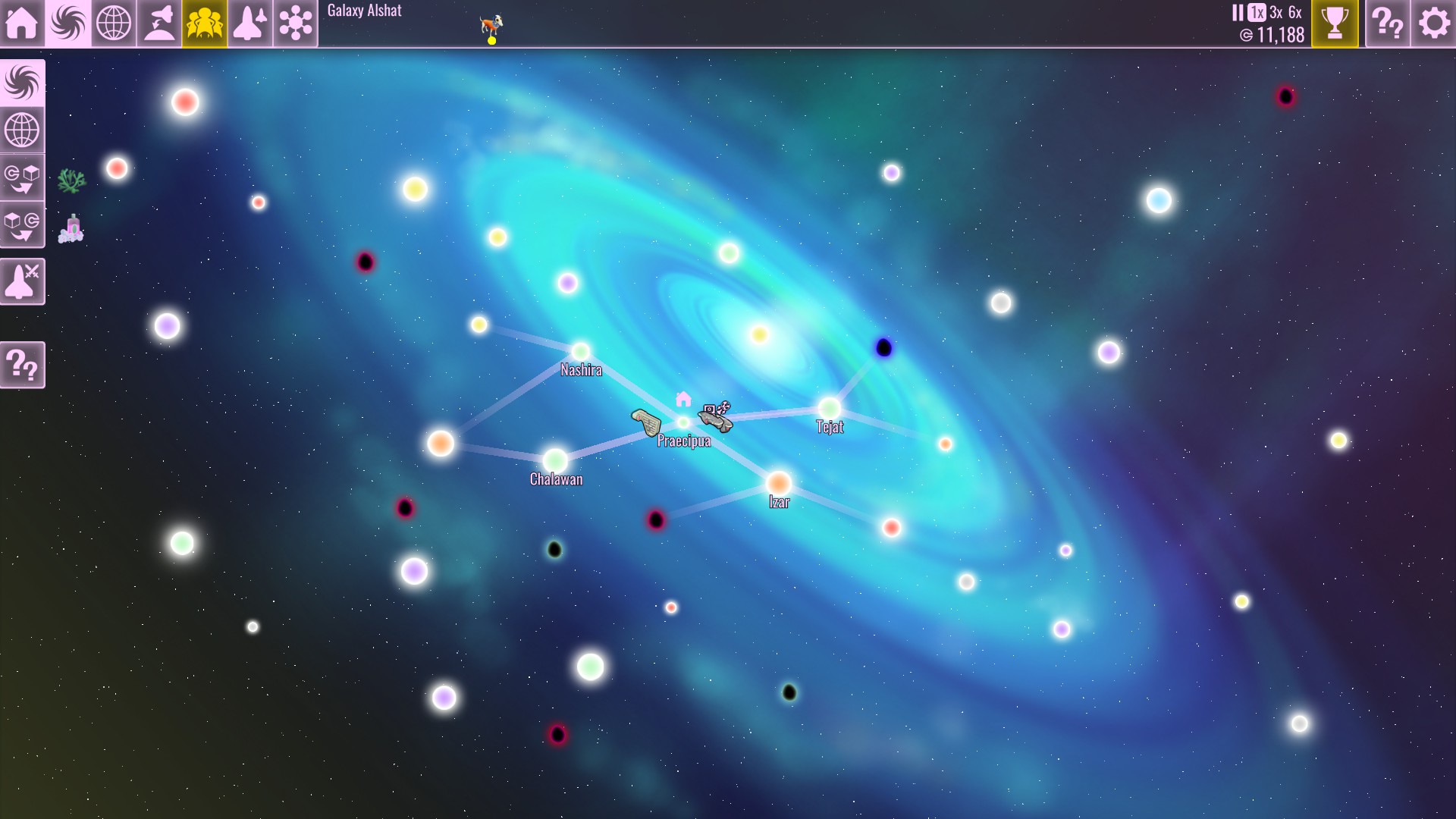 The user interface really lets down the look of the game, though. At default values it’s too large and very ugly. You can change the basic colour and resize it — I’d recommend making it at least a few segments smaller — but each time you do you have to quit to desktop and restart for the change to take effect, which seems crazy; the same goes for any of the other options. It also has an issue with window z-order (you can’t make the tutorial window stay on top), is confusing to learn, and requires keyboard entry of numbers for production, when everything else can be played with the mouse. I also lost count of the spelling and other grammar errors I saw; the English version of the game is in dire need of a professional editor.

Sound-wise, there are fairly few sound effects, but they are appropriate and nicely made. The music is top notch, though very loud on the default settings, comprising a number Jarre-like synthesiser tracks with a spacey theme, replete with wooshes and zaps and all those nice sorts of science fiction sounds — great stuff! There is no speech.

Graphics options are limited to display mode and vsync, as well as the UI options described earlier. I’ve had an occasional stutter while playing, which I suspect it’s CPU rather than GPU based. 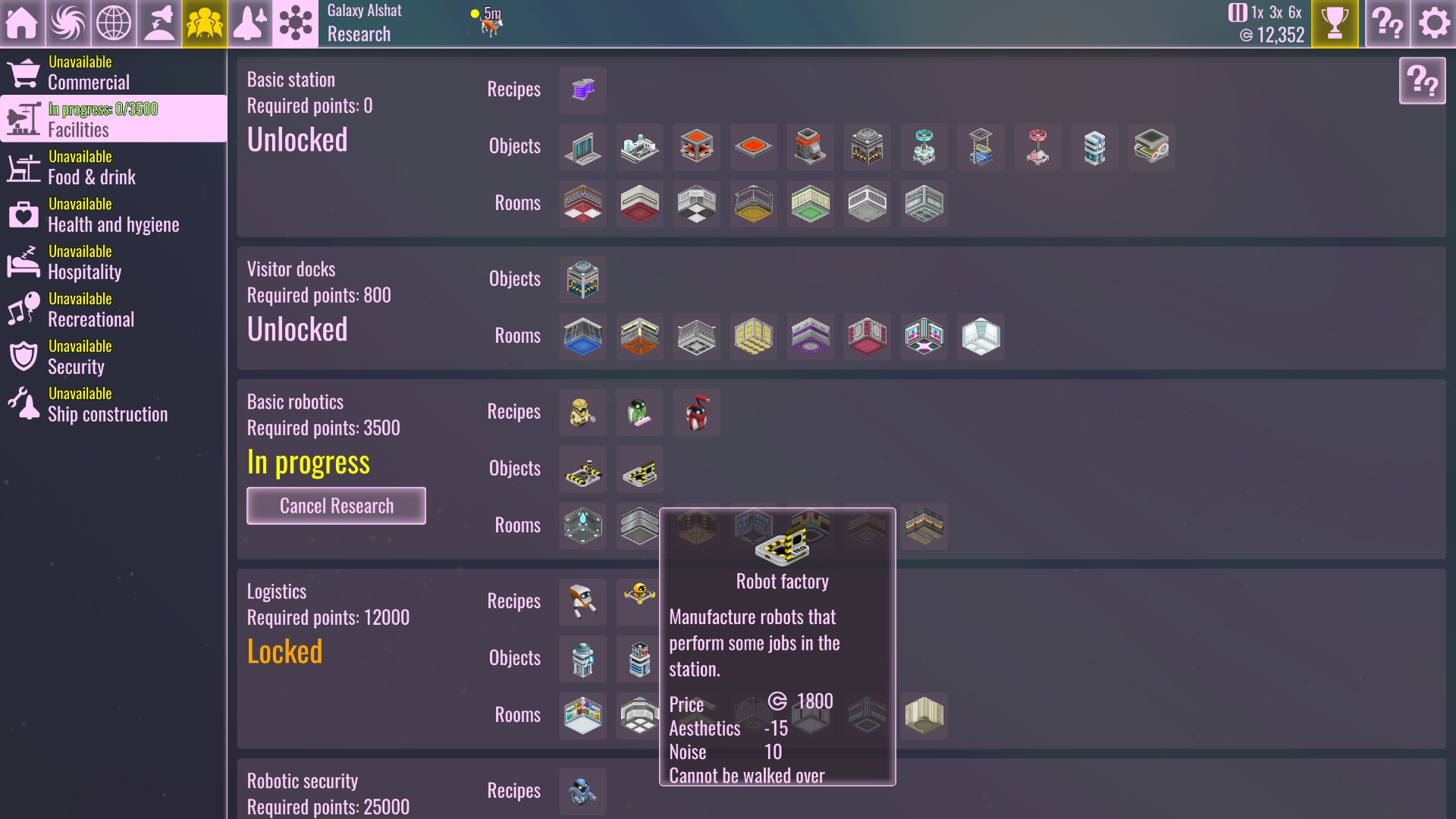 The basic gameplay is fairly typical of the genre: you place plans for the buildings and objects in your station and your officers build them, using up resources in the process. Research points unlock new technologies, allowing you to build more things. You assign officers to different jobs using an ordered task matrix, and they have basic needs that you have to meet, usually through building stuff. You can speed up or pause time. You can also assign your officers to crew space ships to explore planets and fight enemies in order to set up resource collection routes. 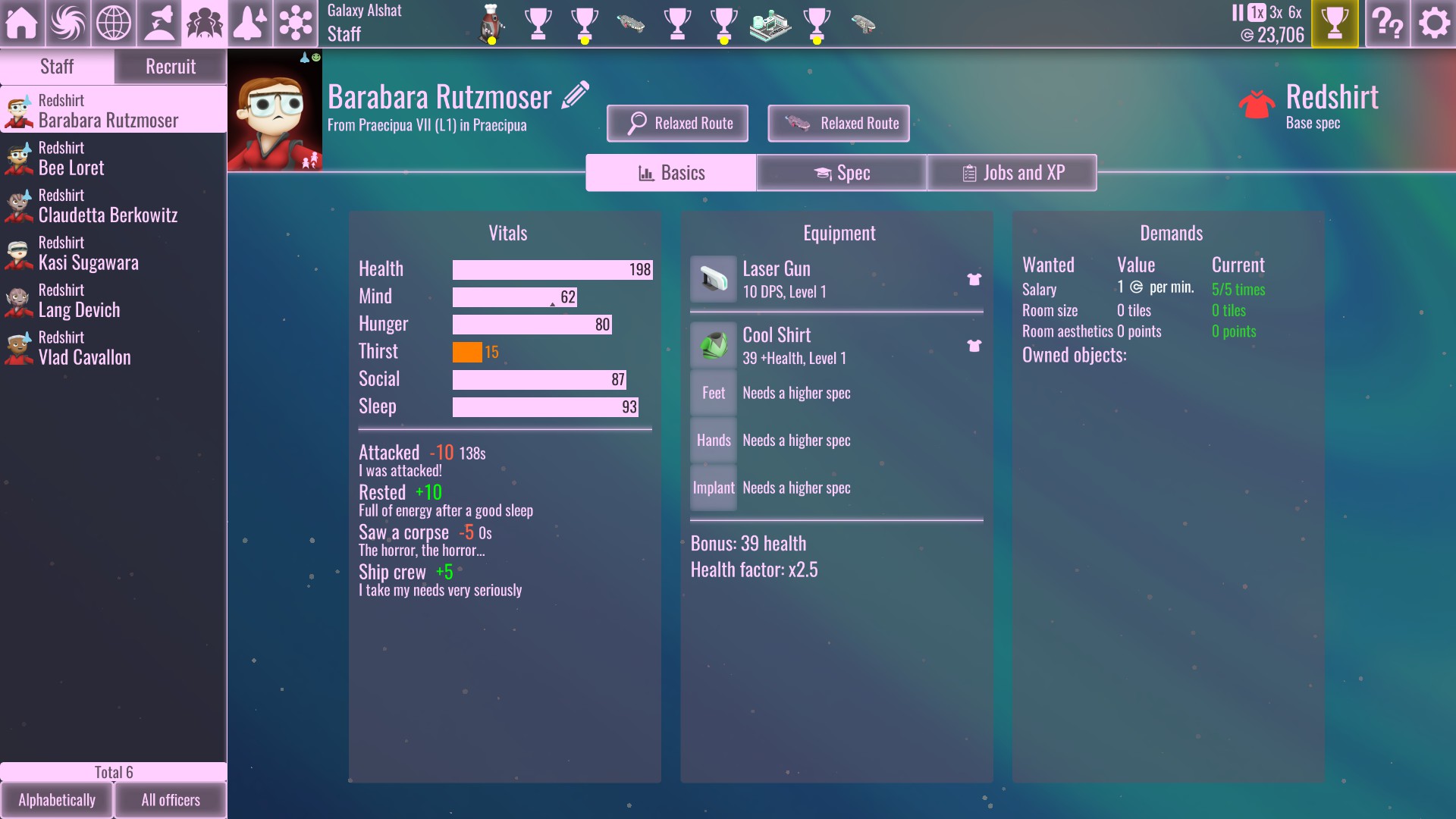 Where The Spatials: Galactology differs from most other colony sims is in its focus on logistics. Rather than building stuff and expecting to use it automatically, here you have to set up a complete supply-and-delivery chain, from sourcing raw materials, setting up a ship to transport them, hauling them to storage locations, hauling them to a production plant, constructing secondary items, delivering those items to shops or secondary storage, … . It takes a lot to produce an advanced item for sale or use and it will probably take you a number of attempts before you get it right with any semblance of efficiency. While the concepts are relatively simple, their implementation is fiddly and often unintuitive; for example, rather than just setting a maximum number of a certain good to hold on the appropriate pallet, instead you also have to set a global maximum inventory as well, or nothing will get built.

The tutorial explains some of the basic elements of the gameplay, but is very limited and doesn’t do a great job. It’s also a bit broken and occasionally requires a restart, and also includes some incorrect information. The game guide does a slightly better job, but is still lacking and is misleading or incorrect in some cases, too, such as in the aesthetics calculations. This all goes to increasing the learning curve and frustration; you should expect to spend your first few hours coming to grips with the game’s basics and then restart once you have a better idea of what you’re doing. 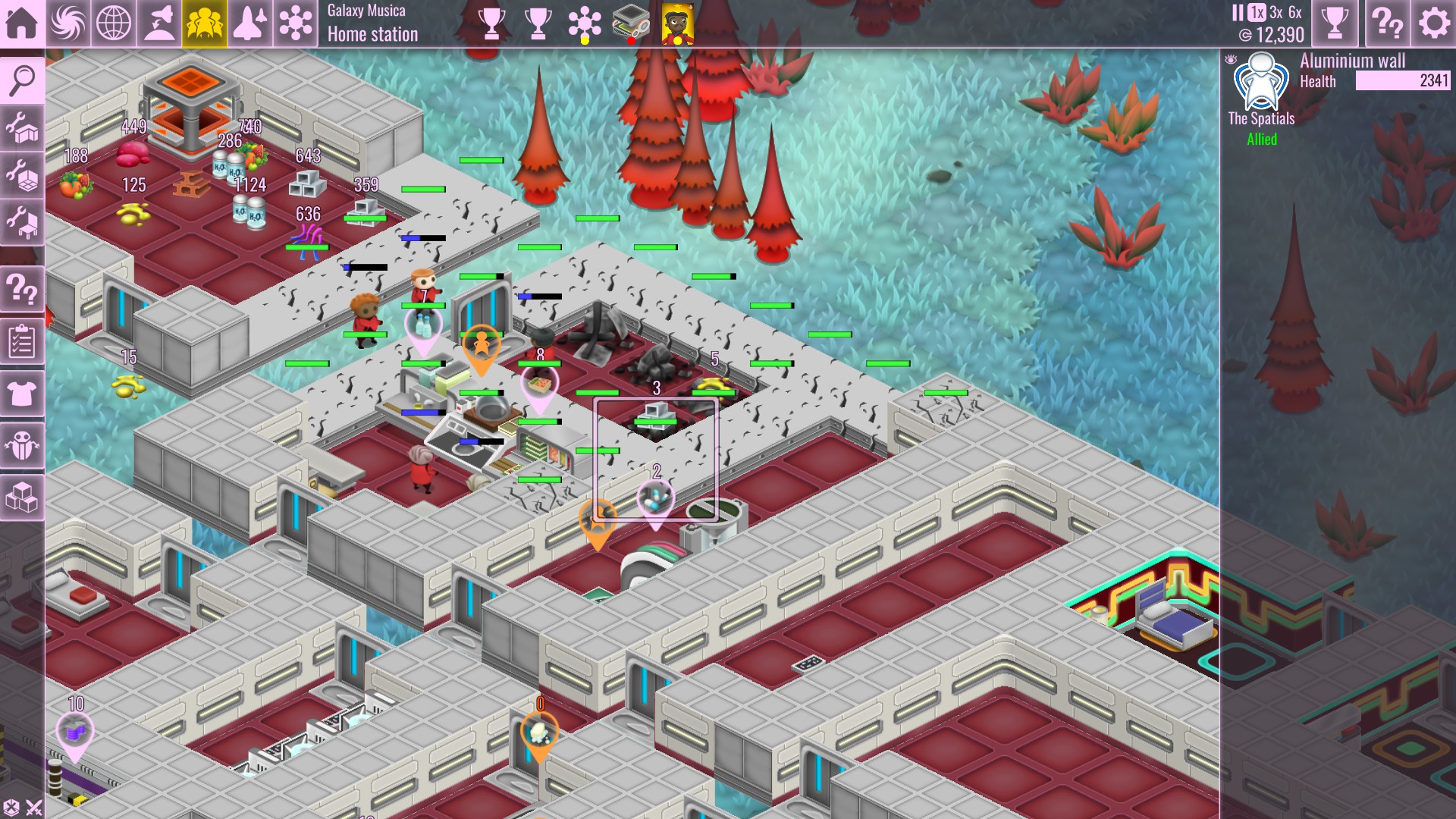 There are also lots of little issues that add up to make the experience rather more frustrating than it should be. These include there being no way to relocate built items in your station — you have to dismantle and recreate them instead; no way to have your ship’s autopilot route include both selling manufactured goods and collecting extracted resources; not being able to tell what resources are needed to build something until after you’ve built it, or sometimes even what a new facility will build; doctors who sit at desks with no patients while complaining and ignoring sick patients requiring treatment elsewhere; wall tiles changing shape of their own accord; officer dock assignments being ignored; cancellation of floor tile construction leaving the tiles behind, effectively making them free; and, probably worst of all, terrible AI, which has your officers complaining about needs not being met even though there are available and stocked facilities for them to meet those needs, not assigning the closest colonist to a task when there’s a choice, or ignoring hostiles in combat while moving. And who thought pressing Escape should do anything other than pause or open the menu, really!? 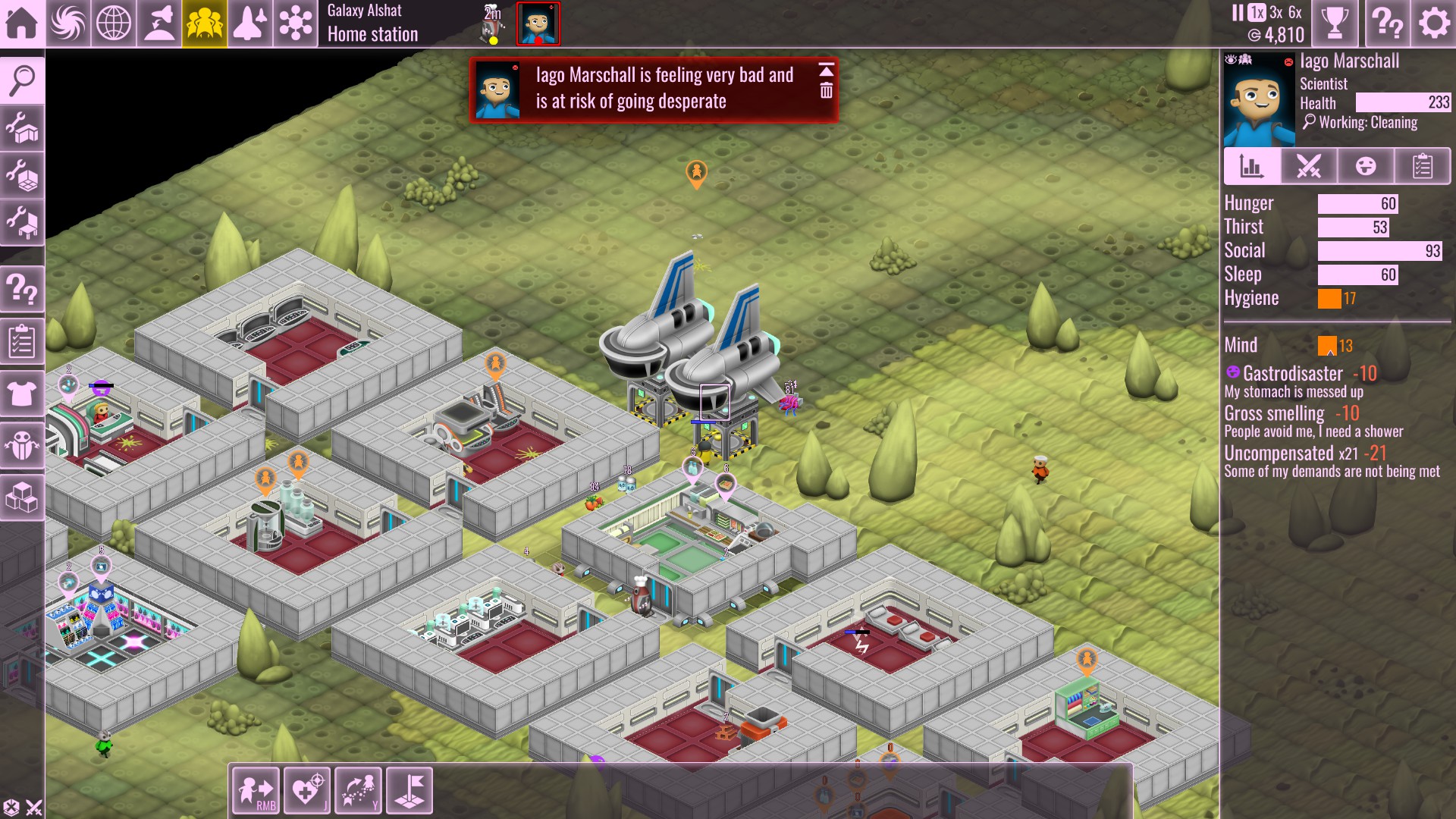 The Spatials: Galactology is an interesting, but frustrating city builder / colony sim. It’s cute and funny with some good ideas, but has enough issues that I think it really should have stayed in Early Access for a while longer. Some concepts aren’t explained well at all and the learning curve is steep, with the logistics focus leading to some painful micromanagement, while other potentially interesting aspects are left unrefined. It’s a shame, too, because the game world is large and there’s so much potential, but it just doesn’t quite realize that potential.

It’s worth a look for fans of the genre.