Incoming message to all the equipment at my base: stop breaking.

The expedition should have been perfect. Nothing on the scans showed any possibility of the mission going haywire. Yet, here we are. Crashed on this planet in the freezing cold with our launch equipment broken. Luckily the base is surrounded by piles of scrap but will the other equipment hold up so we can stay alive? Is this bad feeling just because we crashed or is something sinister lurking beneath the ground? Did our other crew members make it out?

Right as you start out, you are tasked to make sure the three out of six randomly selected crew members do not die. The harsh temperature always dipping below -20 degrees Fahrenheit (I’m assuming) is the first and worst enemy you can come across. Most of your deaths? Thank the harsh mistress of Mother Earth as it can easily dip below -80 degrees Fahrenheit if a storm happens to hit. Just be sure to learn when to send out someone so they won’t freeze to death, alright?

There are a few actions the crew can perform inside the base. For one, you can put them the two rest pods so their health will increase. Having more than one character, and later getting even more, you really have to find the rest pod sweet spot to allow everyone to get a turn before they die. The base, luckily, also has a system to create its own food so there’s no need to go out and hunt.

In addition to making sure your crew don’t die, you also have to make sure their gathered resources aren’t going into the void, as adding to a full storage unit wastes the resources entirely. You can also have one of the members study up on a certain task. Want them to get better at making food? Want them to learn a totally new task? Make them study. Be aware that they will be auto-assigned to what they are learning once it’s maxed, so watch out for that.

The one thing that I’m really puzzled over is why there is no action to make a character wait in the base. The only way to get the same effect is to get everyone queued on tasks inside the base, but with an emphasis with how deadly the weather can get outside, I would think there would be a wait action. There is a case to have them learn a new task (or learn how to do it better) until the weather gets better but only one person can do that at a time. Perhaps having more than one person make food would work, but that depends on whether you have a full refrigerator or not. At the end of the day, having a wait action would have the same effect as queuing everyone up and it’s baffling why there isn’t one.

Other than the weather, you have two gatherable resources you have to manage: wood and electrowaste. You can gather wood on the left side of the base or electrowaste on the other side. Wood does one thing: heat your base. But it runs out quickly. The crew can survive without heat inside the base and as long as you keep an eye on those who stay inside, you will be fine. You’re better off getting something that has a lot more uses than wood.

Electrowaste keeps the base up and running. Your equipment will break down sooner or later. Using your electrowaste stockpile allows your equipment to be fully functional. There is some equipment that isn’t essential, but if something like the rest pods malfunctions then get it fixed, pronto. Electrowaste can also be used to upgrade your equipment to hold more of a certain resource. More importantly, electrowaste gets you closer to your goal, as it will help you repair the engines and power source of your spaceship. As with the wood, the more you gather the more you have to walk, and it can be especially dangerous if something breaks during a storm. Do you upgrade equipment and risk going without emergency electrowaste supply or wait just in case? 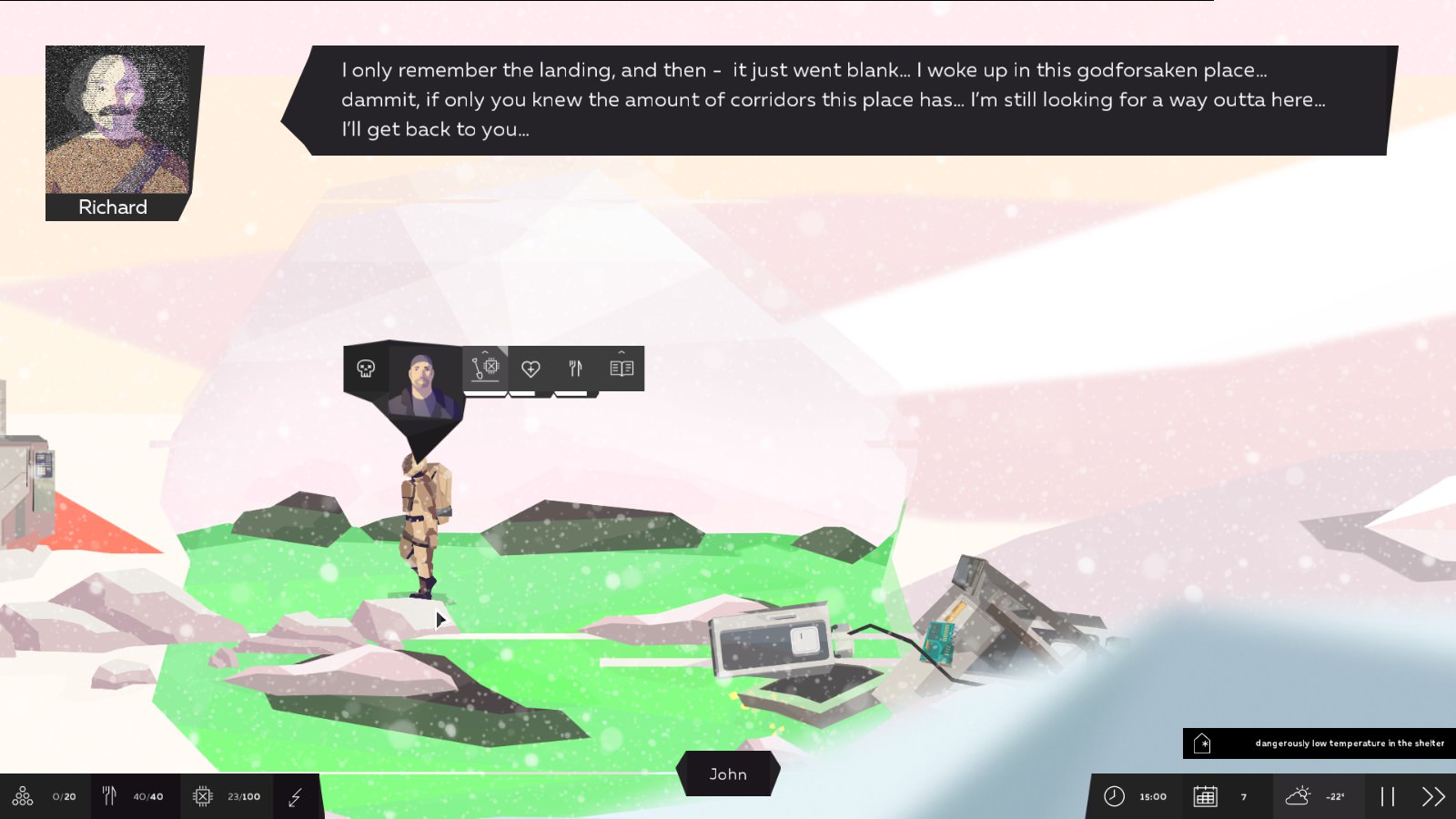 Once you find the best way to survive that really is the only way you will play. Get into the rhythm of checking everyone constantly, and making sure to send out people at the right time and you’re set for all future playthroughs. On hard mode, from what I could tell, the weather does get worse and everything breaks down much faster than normal.

I really wished there was more immersion in Symmetry. Yes, we get creepy glitches, resources dwindling down and making the crew travel further to get them, and something that you could swear wasn’t there before, but there could be more. How about upgraded and fixed equipment having mismatching parts or colors, or even have the base, generator, and spaceship get worn down to symbolize how long you’ve been there. What if those creepy glitches were more than glitches, or have characters slowly going insane as the glitches become their reality? Perhaps have a system where you can upgrade suits to be better suited for the cold, but not so much that characters can survive through storms. Weirdly, the survival mode, which unlocks after finishing a game, does show the blood and dead bodies but why not in the main game?

The story, on top of everything else, is really forgettable. I think that if the story were better the gameplay could have easily been more forgivable as players would want to keep trying or see if other characters caused different events to happen. We do get titbits from each character as to what they are thinking, what they remember from the crash, and their interests, but that’s all, other than the vague narration. Even when you have different crew members, you only learn about the crew. There is the foundation for a great story here, but the game just doesn’t capitalize on it. 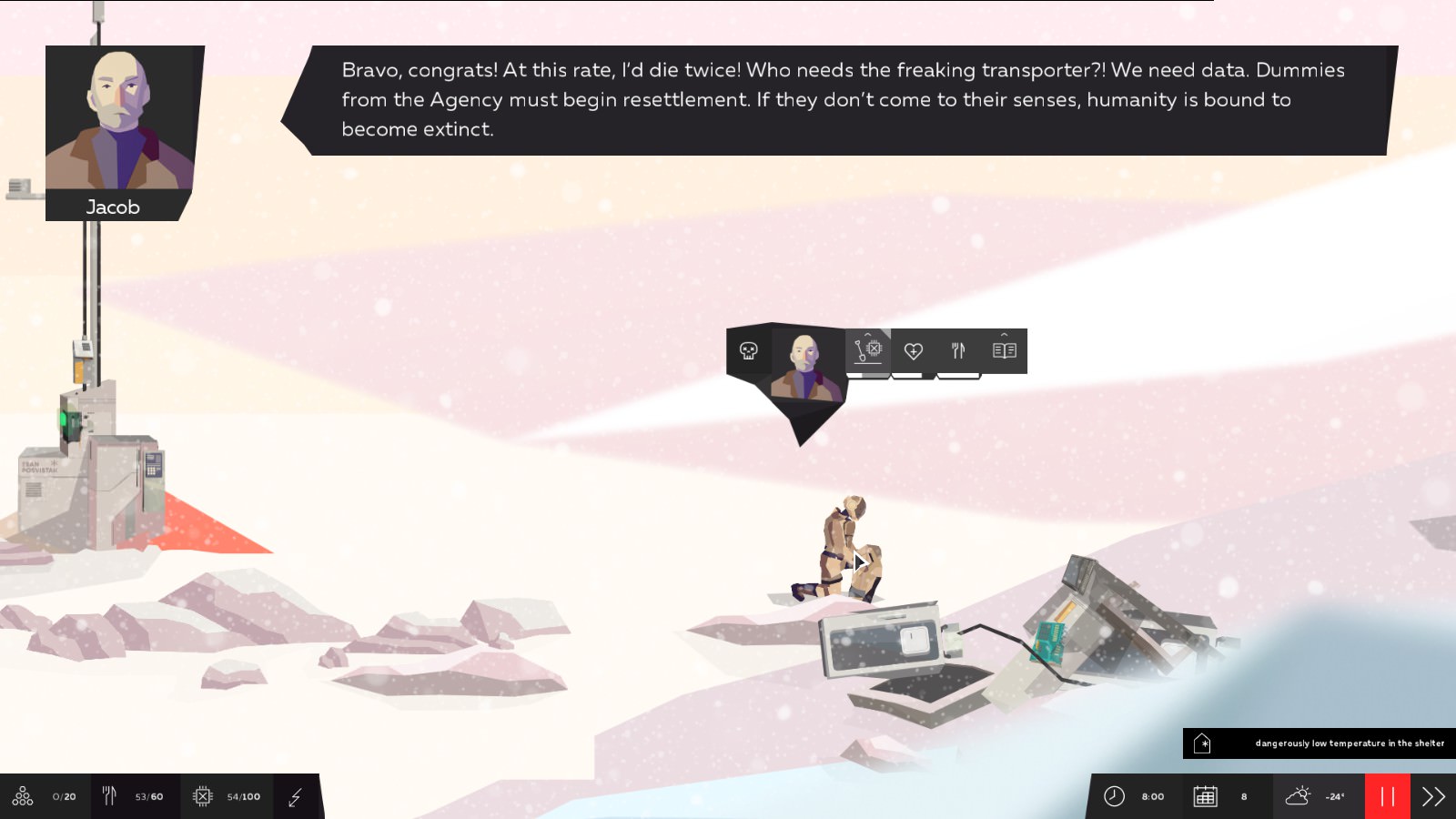 If hard mode were the only mode available when I started playing I would not have found the ending satisfying. It is not any more satisfying in normal mode, but at least it is easier to reach. There has been word about multiple endings to Symmetry, however, the ways to get the other ending must be either really obscure or really hard to get, as I tried to get it a couple times with varying conditions. The worst thing is that the developers are secretive and will only private message those who want to know, though you have to hope that they see your response as the forum post is old by now.

The minimalist graphics look nice and clean. Everything is easily understood, though it looks weirdly sterile. When the crew doesn’t have suits on, you can tell who they are just by looking at their characters, rather than their profiles. You can even estimate the temperature by just looking at the weather. You will mostly hear the wind blowing, but other noises will indicate when something has broken or been upgraded (which I found was highly similar despite playing multiple times), or there’s a glitch or earthquake.

Symmetry looks like a game that would be great, but overall turned into a “just okay” title. The story is forgettable and the survival experience focuses heavily on looking after the crew to make sure they don’t go back into the snow without resting first, don’t starve, and don’t waste resources due to storage being full.

I’m honestly really glad that normal mode was implemented before I played as I would not have replayed the game at all try to uncover the other ending otherwise, as equipment breaks down too quickly. I have to say that the first play through does do the atmosphere justice. I felt creeped out as I wondered whether I was just going crazy or if the weather satellite was always in the air, and when seeing all the different glitches. But after playing the game again and thinking about it, I thought there could have been much more done to help with immersion.

I only recommend Symmetry on a discount or if you know exactly what you’re getting into.