The latest strategy title from Paradox is set on Mars. Control a squad of drones and rovers to pave the way for human habitation, and then try to keep the colonists alive — and profitable, of course!

Surviving Mars is the latest title from Haemimont Games, published by Paradox Interactive.

The game puts you in charge of establishing the first ever colony on Mars. Beginning with touchdown of the first rocket, loaded only with automated and remote-controlled machines, and eventually including human colonists, you’ll have to deal with all the regular colony simulation staples: construction, power, consumables, mining, resource management, etc, as well as a random disaster or two. Surviving Mars also includes some interesting and believable elements such as drones and rovers, habitation domes, and colonist sanity.

Note: This review is based on a pre-release version of the game, which I received for free from Paradox Interactive.

The first thing that struck me about the game is the main menu: there’s no title! In fact, I haven’t noticed “Surviving Mars” anywhere. There’s also no introductory CG video or other cut scenes, or any sort of background information provided at all before you start the game, though the encyclopaedia is moderately interesting. Other than these oversights — which may be corrected by release — the game’s production values are very high, indeed. 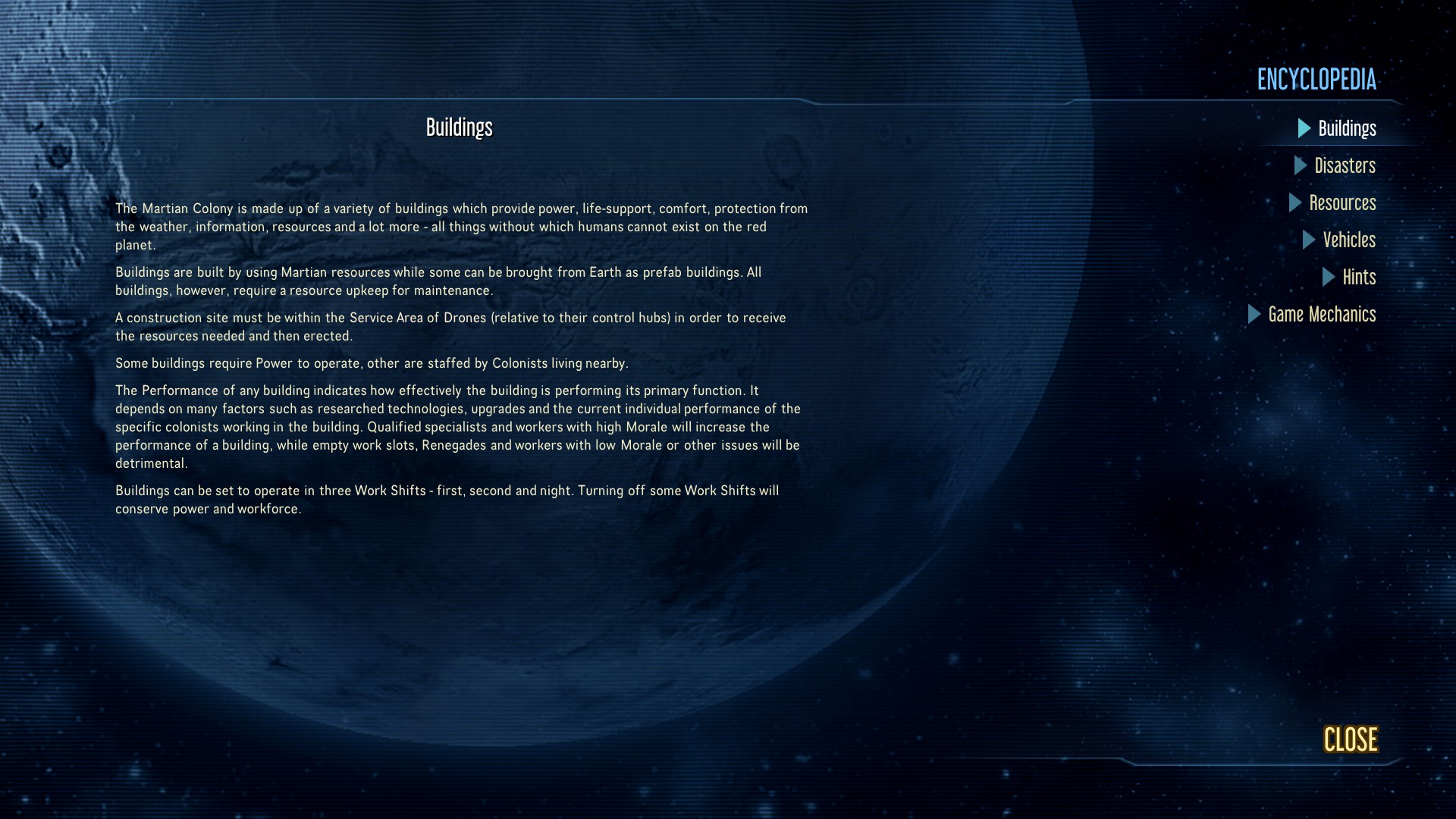 The title, loading, and various menu screens have lovely space or Martian vistas as backdrops. The in-game graphics are 3D with a manual camera, and the engine is capable of producing some very lovely images. The day-night cycle includes the sun moving across the sky in a realistic manner, casting shadows of varying intensity and length, and reflected convincingly in the glassy domes. Night could be a little darker, but I suspect it’s this bright so as to make the player’s job of managing the colony easier than it would be in more realistic darkness. 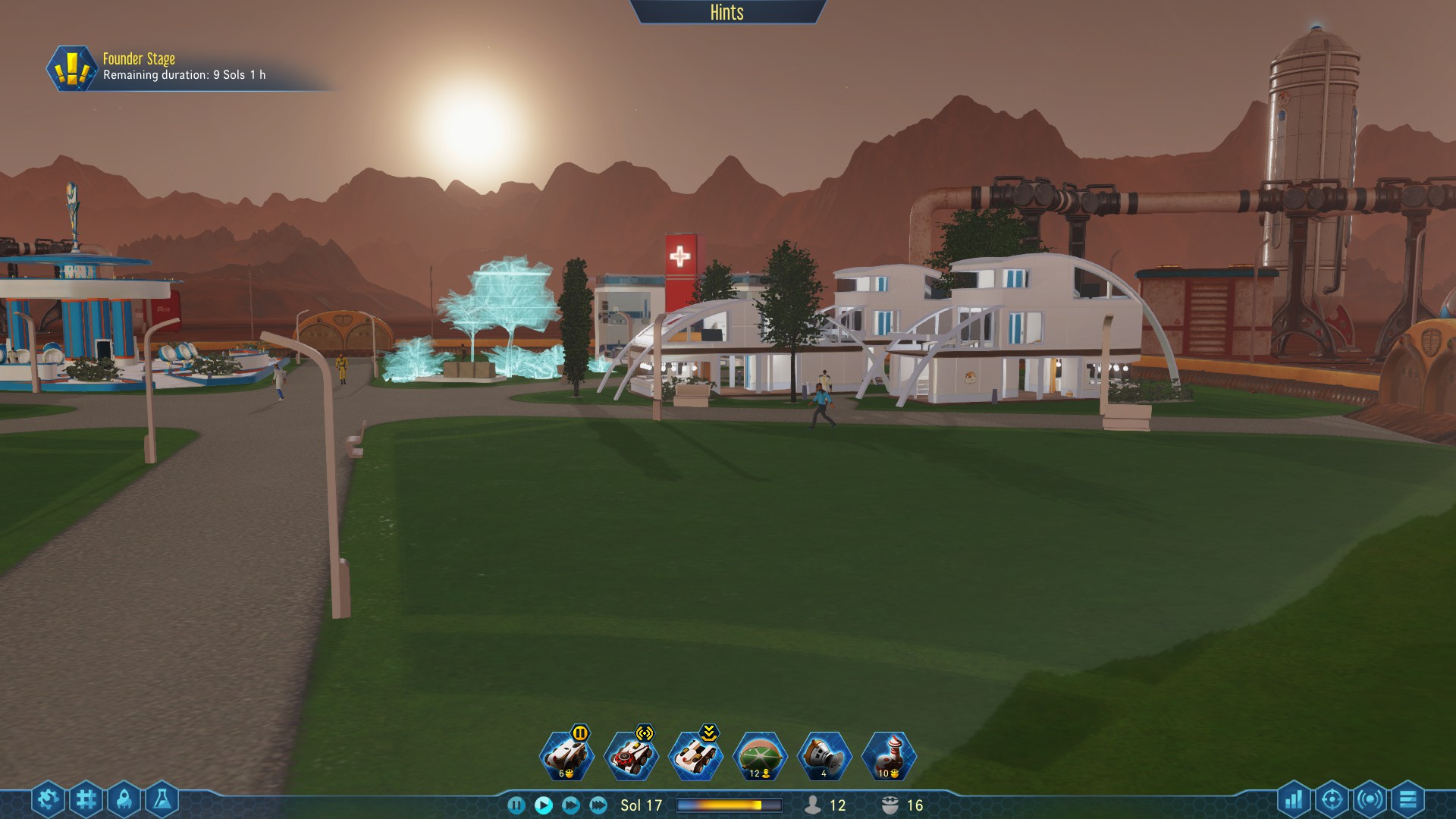 Buildings and units are all very nicely modelled and animated, with some very creative internal dome structures taking advantage of the reduced gravity. Human colonists look good, too, though I’ve not found them quite as interesting as the inanimate objects. Textures are great, with the fine Martian dust getting everywhere and gradually making your lovely shiny equipment look like it’s been sitting there unmaintained for decades. 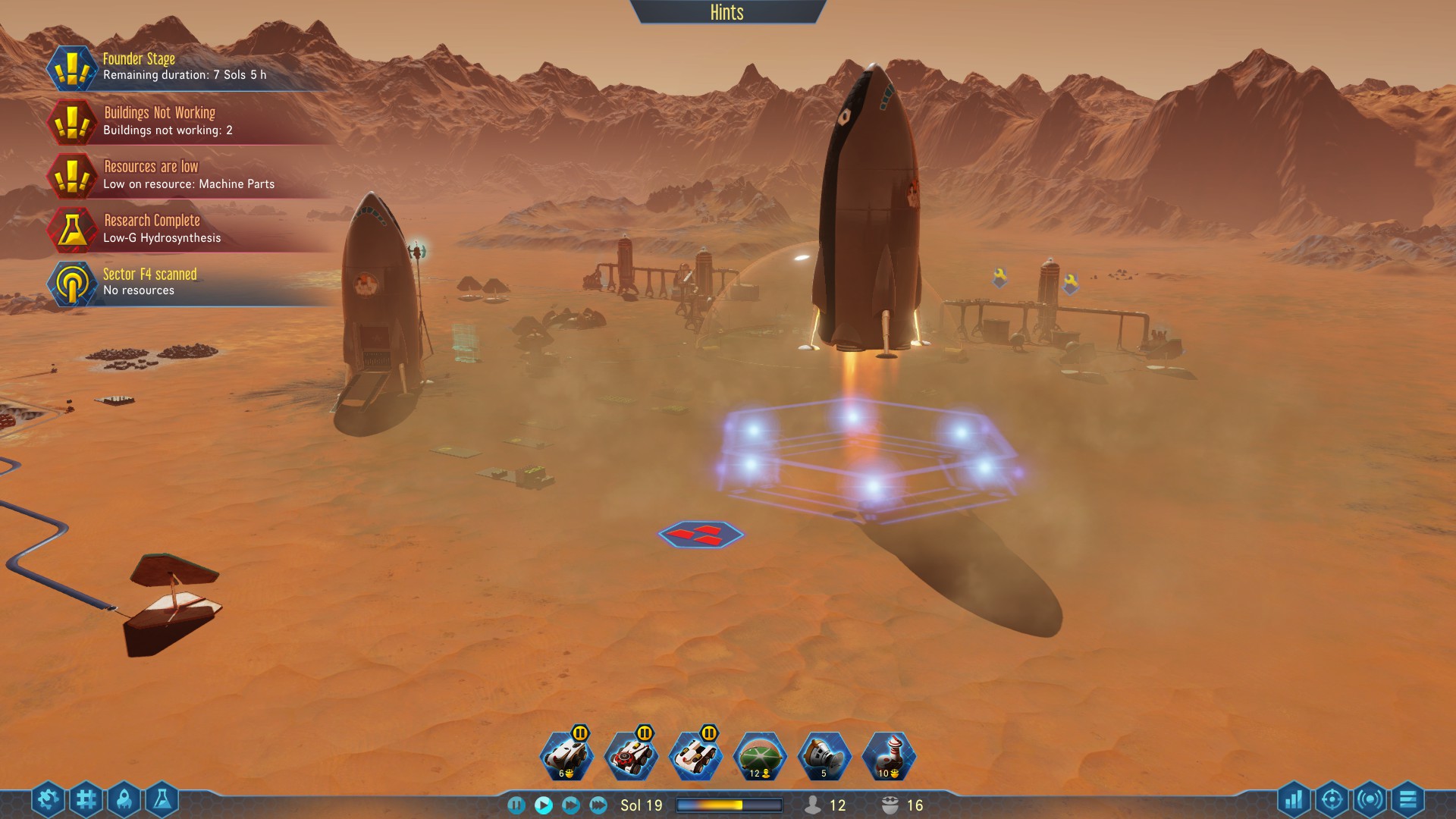 Camera maximum zoom is fantastic, enabling you to see your friendly drone ‘faces’, but camera rotation at full zoom seems a bit off. Minimum zoom is not enough, however, and the zoom out to world map is jarring and annoying, almost always zooming in again on the wrong sector. I’d like to see the camera able to zoom out much further and an option to remove zooming out to the world map. I also haven’t managed to stop myself middle- or right-clicking and dragging on the world to try to pan the camera. 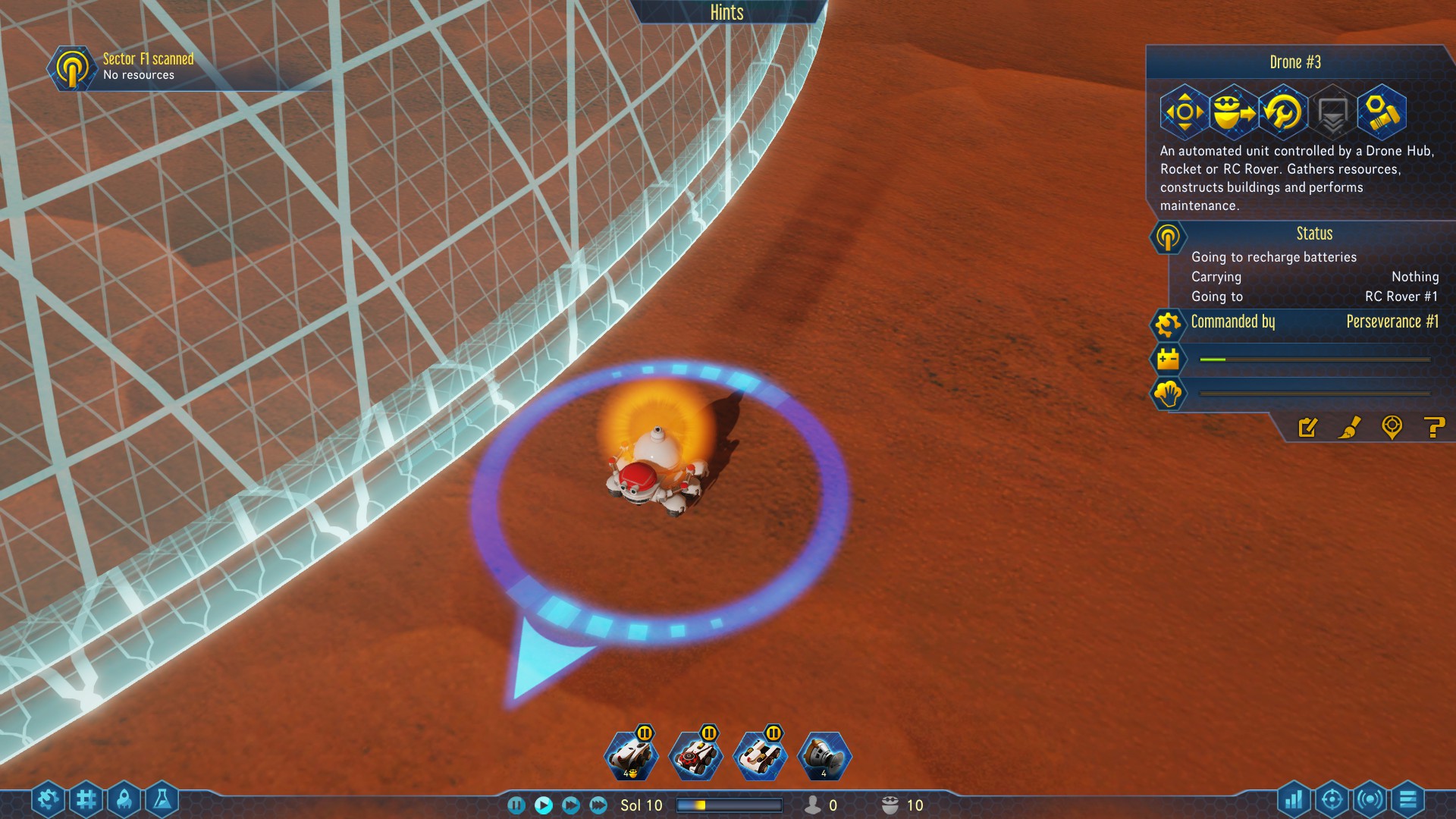 The interface looks clean and friendly, but I’ve found it a bit fiddly and confusing at times. Right-click to build just isn’t intuitive to me and I always end up wondering why other interface components won’t work before I realise the build interface is still up and I have to right-click to close it again.

Music is top notch. There are four radio channels with wildly varying instrumental tracks between them. If I had to categorise them I’d say there’s western, rock, ambient, and dramatic orchestral. Some channels include occasional entertaining DJ announcements. Sound effects are appropriate and professionally implemented; nothing to complain about, but nothing that made my jaw drop either. Other than the DJ announcements, voices are limited to announcements of anomalies and special events and a lovely, but stereotypical, female computer voice for game messages: “Resources are low” and that sort of thing.

I haven’t hit any performance issues, but there are plenty of graphics options with which to fiddle. 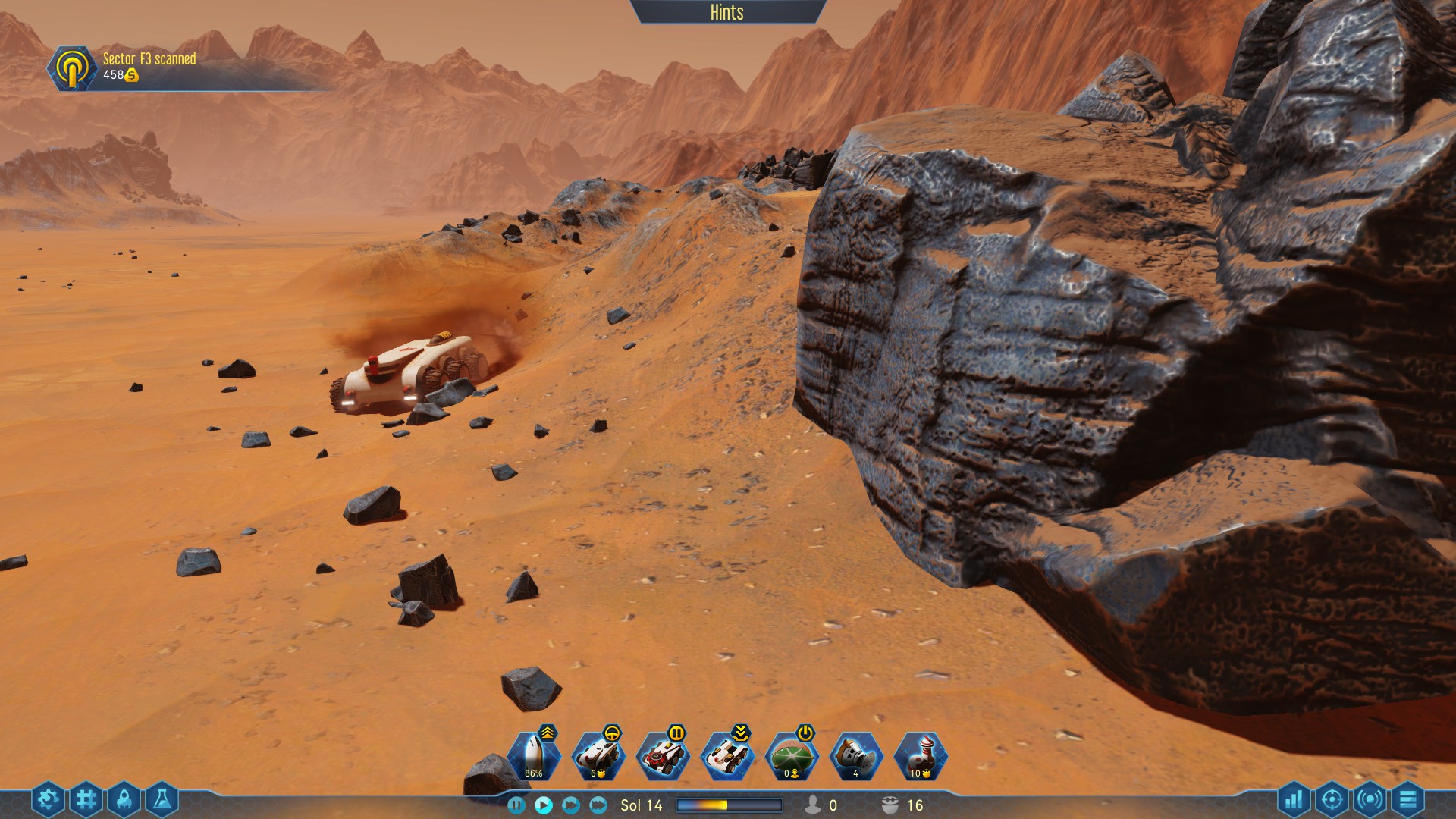 With no proper tutorial and only a handful of useful in-game hints, Surviving Mars can be quite hard to get into over one’s first few hours’ play.

The main menu offers two play options: Easy Start and New Game. Easy Start was my first choice and seems to be a pre-defined game configuration, but after playing around with New Game I don’t really see the point; the developers should have simply set appropriate defaults in the New Game configuration instead. 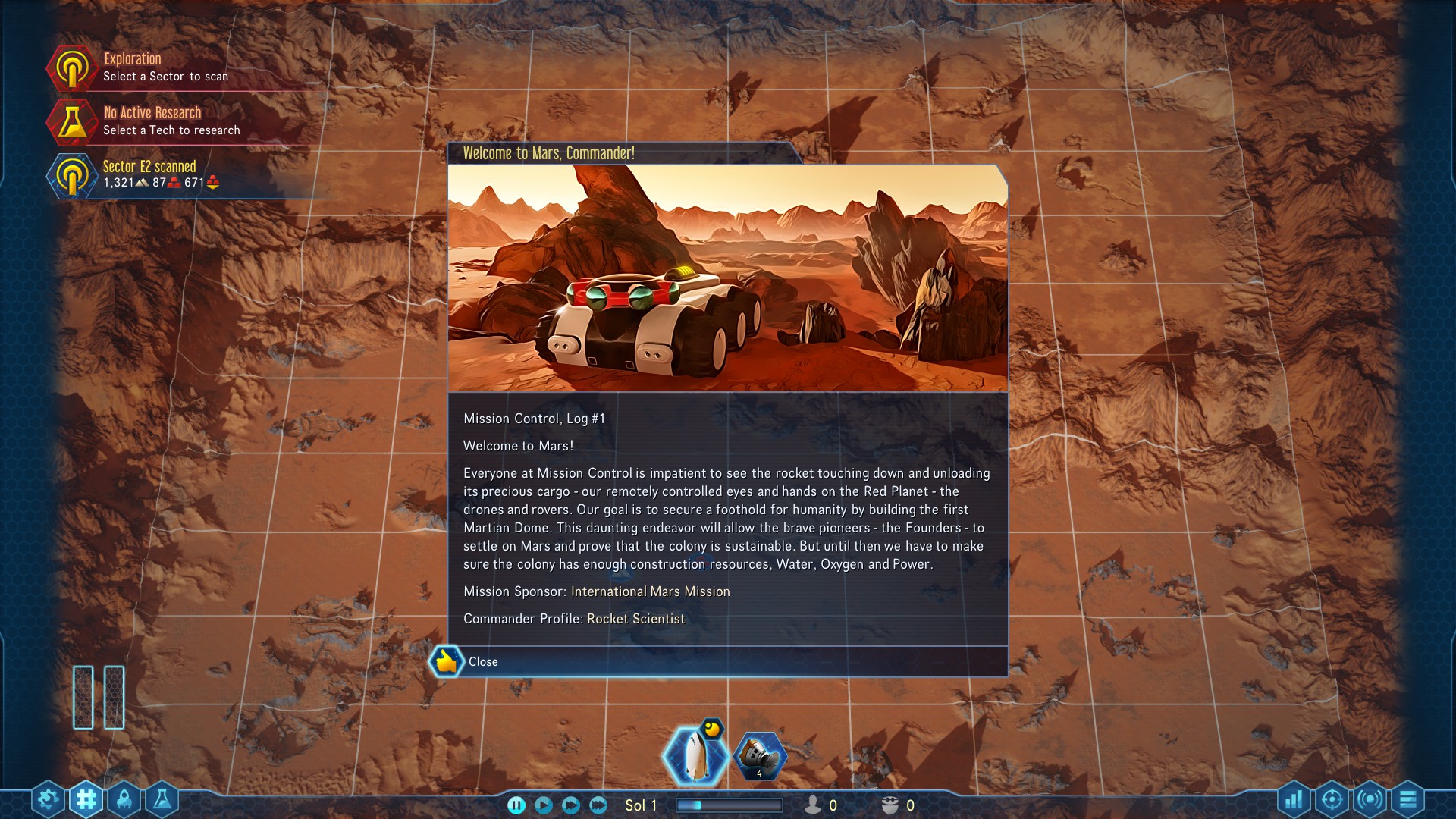 In each game the core gameplay is the same: use drones and rovers to find a suitable colony site and establish the infrastructure required to support a sealed dome suitable for human habitation, and then recruit colonists to live in the domes, operating various production installations in order to further colonisation of the planet (and harvesting of its resources, of course). It’s mostly typical colony simulation stuff, but the structure leads to slightly odd pacing and balancing of resources, as some resources can only be produced on the planet by humans, and most installations require regular maintenance — often using these same resources. 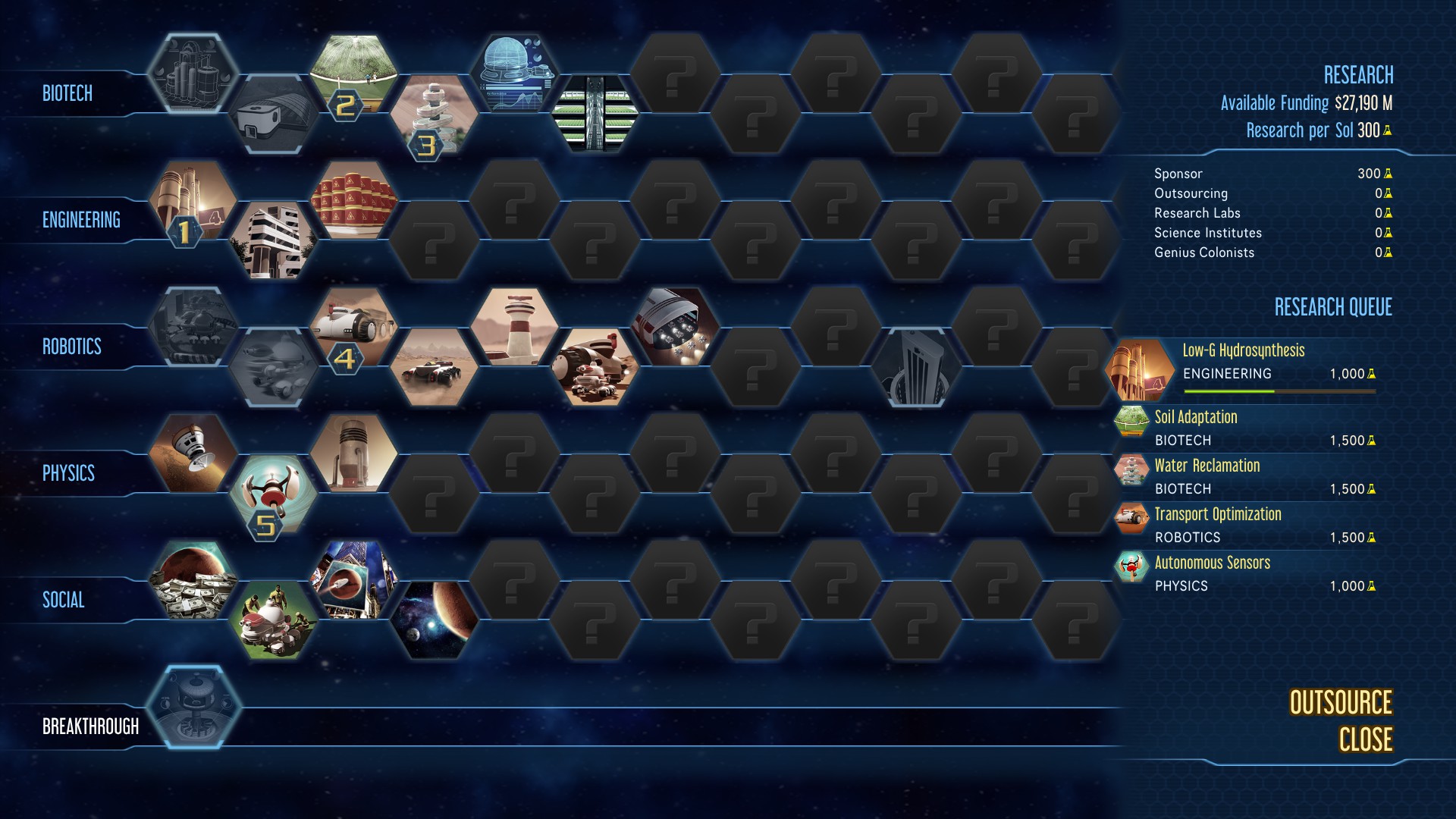 The day-night cycle is important for colonists as well as for the power network, with solar being cheap and reliable, but only working during the day. Weather plays much less of a role on Mars as it does on Earth, but there are dust storms and cold snaps, which can prevent much of the support infrastructure from working properly. Domes can be interconnected with tunnels, which not only look cool, but provide practical benefits, too. And if you get really stuck you can order a supply rocket from Earth — assuming you have one available — and pay huge amounts for resources, infrastructure prefabs (which still seem to use resources to build!?), other equipment, or more colonists from the eager pool of applicants, filterable by a number of attributes. 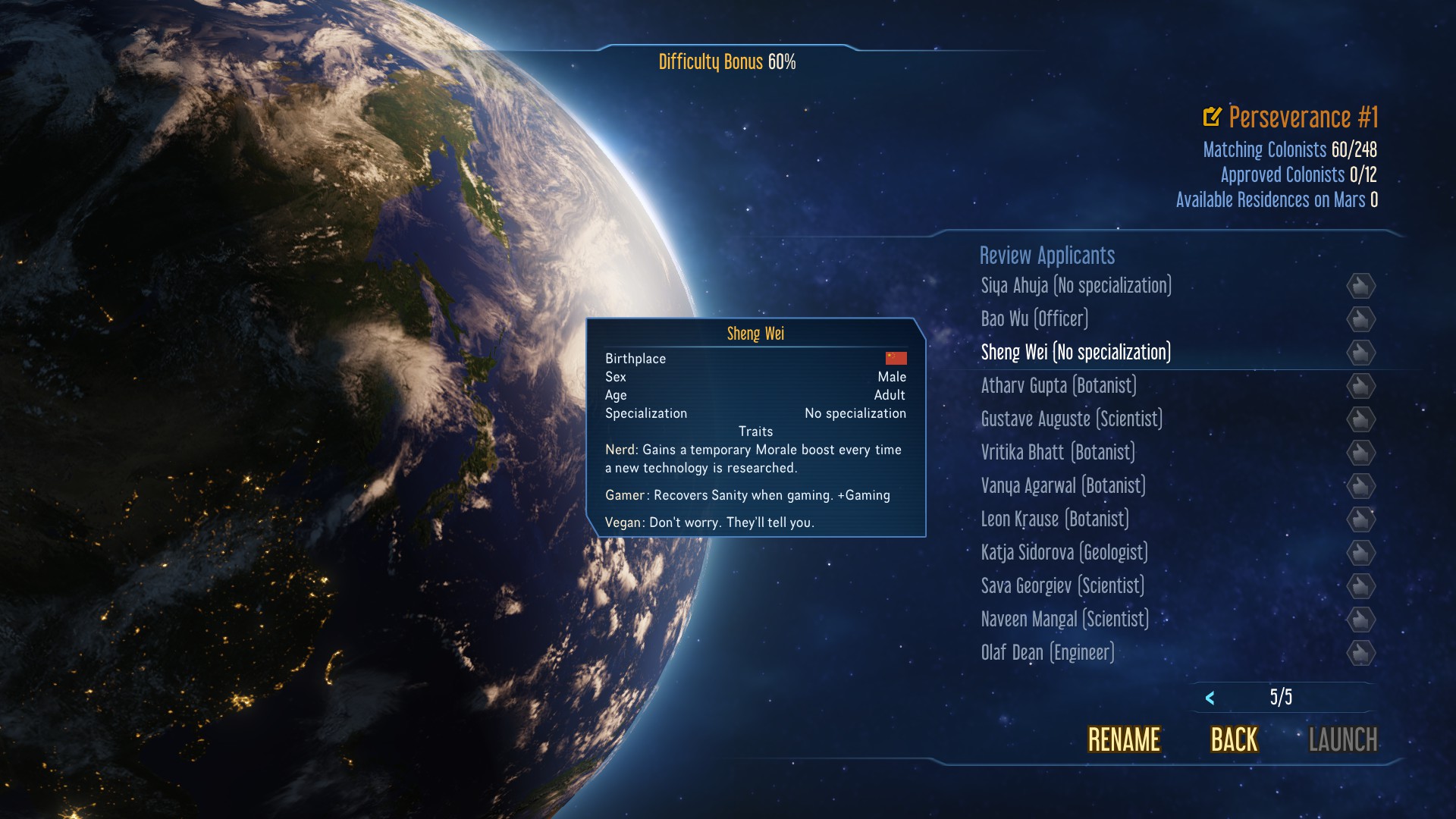 The game gives you some choices when you begin a new game. Mission sponsors determine available funding, rockets, research speed, and other assorted benefits or drawbacks. Commanders provide special bonuses in certain situations, often unlocking a given technology early on. And the dozen or so mystery storylines provide extra goals and interest to make each game different. Steam Workshop-based modding is supported, but I haven’t played around with that.

I’ve encountered a few small issues. Each building has an area of influence around it, but this isn’t explained well; in some cases it’s self-explanatory, but in others I don’t understand why it’s there at all. Connecting two close-together buildings with pipes can be frustrating; why can’t I just connect the buildings themselves, which would be a more efficient use of precious resources? And drone AI seems unreliable. Drones sometimes do nothing even though there’s work they could be doing. I suspect it has something to do with the range of their controllers, but sometimes it just seems dodgy. Far away drones will sometimes be used in preference to those close by, too, which is inefficient. I also couldn’t get Steam Cloud sync working and didn’t unlock any achievements, but I assume these will be fixed at release. 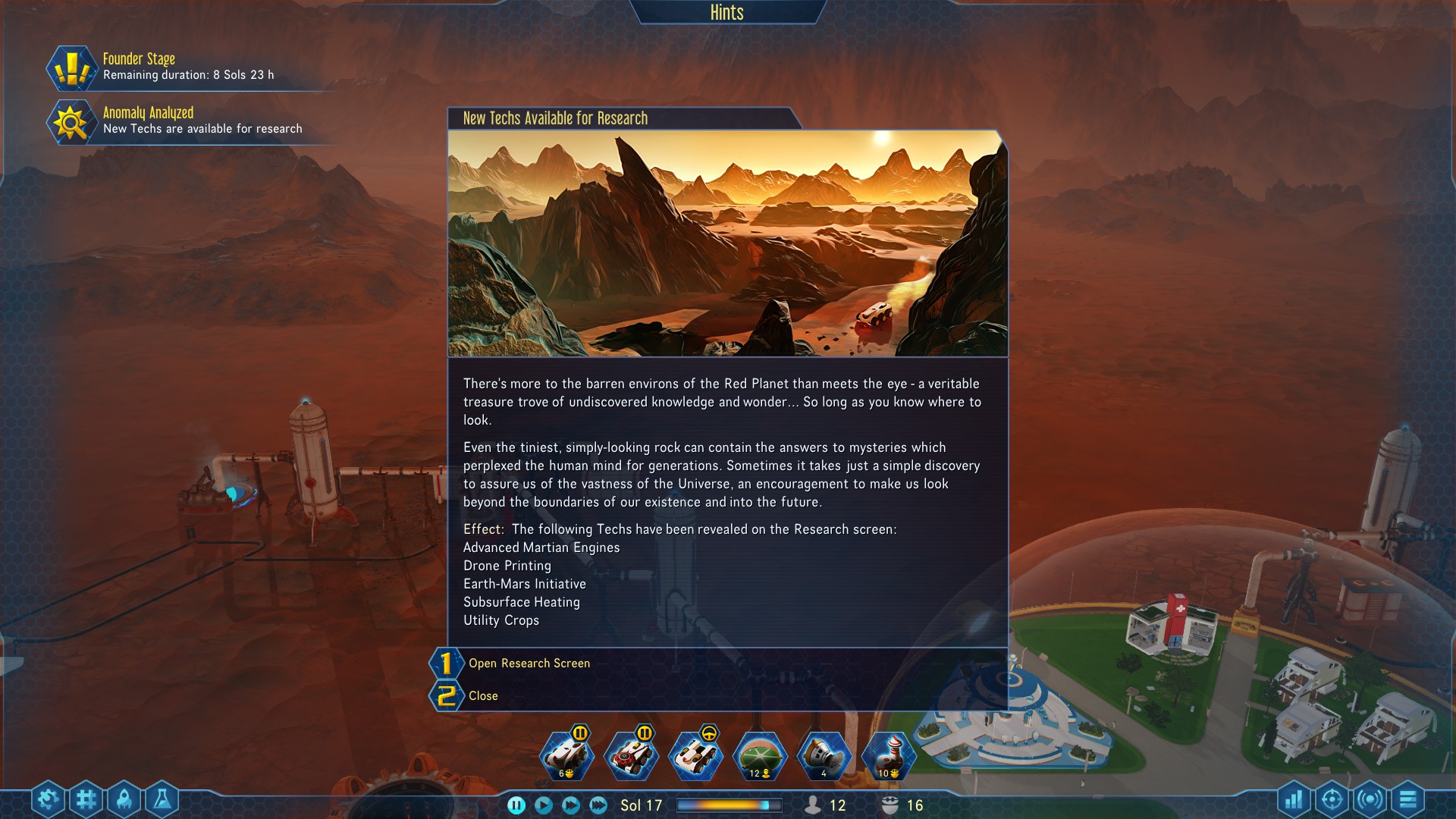 My attitude towards Surviving Mars has see-sawed a bit over the hours I’ve played it so far. I found it much harder to get into than any other colony simulation I can recall, and early on I kept wondering if I was missing something. Occasionally I still do.

Ultimately it’s a solid game with all the features you’d expect and some interesting variations. It doesn’t really offer anything revolutionary — at least not that I’ve seen yet — but it does feel like a good evolutionary step for the genre. For fans of city builders / colony simulations, it should offer many, many hours of enjoyment. For those who don’t like the genre, Surviving Mars is unlikely to change your mind.