Siege Saga is a physics-based puzzle game that wants to keep gameplay simple, but interesting. It presents some interesting puzzles that are tricky to solve and get the best rating at the same time. If you love puzzle and building games, check this out.

Siege Saga is a physics-based puzzle game. Your main objective is to protect the king, with protection of his servants and queen being secondary objectives. You are provided different building materials each level and need to use them in an intelligent way in order to deflect all incoming attacks and leave the king unharmed. Siege Saga possesses a simple gameplay formula that is easy to learn, but hard to master. It succeeds admirably at its goal of being a novel puzzle game, with puzzles becoming quite hard as you progress.

General Gameplay
The game is divided into more than 100 levels spanning different regions. In each level you must build a shelter to keep the king and his subjects safe.

Controls are pretty simple: click a building item and drag to create a plank (steel or wooden). Some other building blocks can only be placed as they are, while a few can be attached to other items, such as ropes or balloons, in order to link multiple objects together. As the game is a port from mobile, the mouse is used for everything.

When you are finished building your defense, the level starts and several siege engines and enemies attack you with various weapons ranging from catapults to ballistae, meteors, and magic, each having different effects on your defenses. Since all defensive blocks have a set amount of health and proper mass, they can move, fall, or even be destroyed as the assault progresses.

There are three stars to collect in each level, achieved by saving all the king’s servants if present and also not using all the available blocks. This system rewards thinking of creative ways to beat the levels. Stars do not unlock anything except Steam Achievements, of which the game has around 100.

Content
With more than 100 levels to not only beat, but gain all three stars, this game will keep you entertained for some time for sure. In around four hours of gameplay I managed to complete 45 Levels. With the difficulty always increasing I’d guess there is eight to eleven hours of gameplay, depending how good you are at puzzles. There is also a level editor with which you can create custom levels, but I found no way to share them online.

Challenge
Puzzles are quite easy to begin with, but they progressively become more difficult, requiring clever moves to get all three stars. If you love puzzle games this could very well prove a challenge. 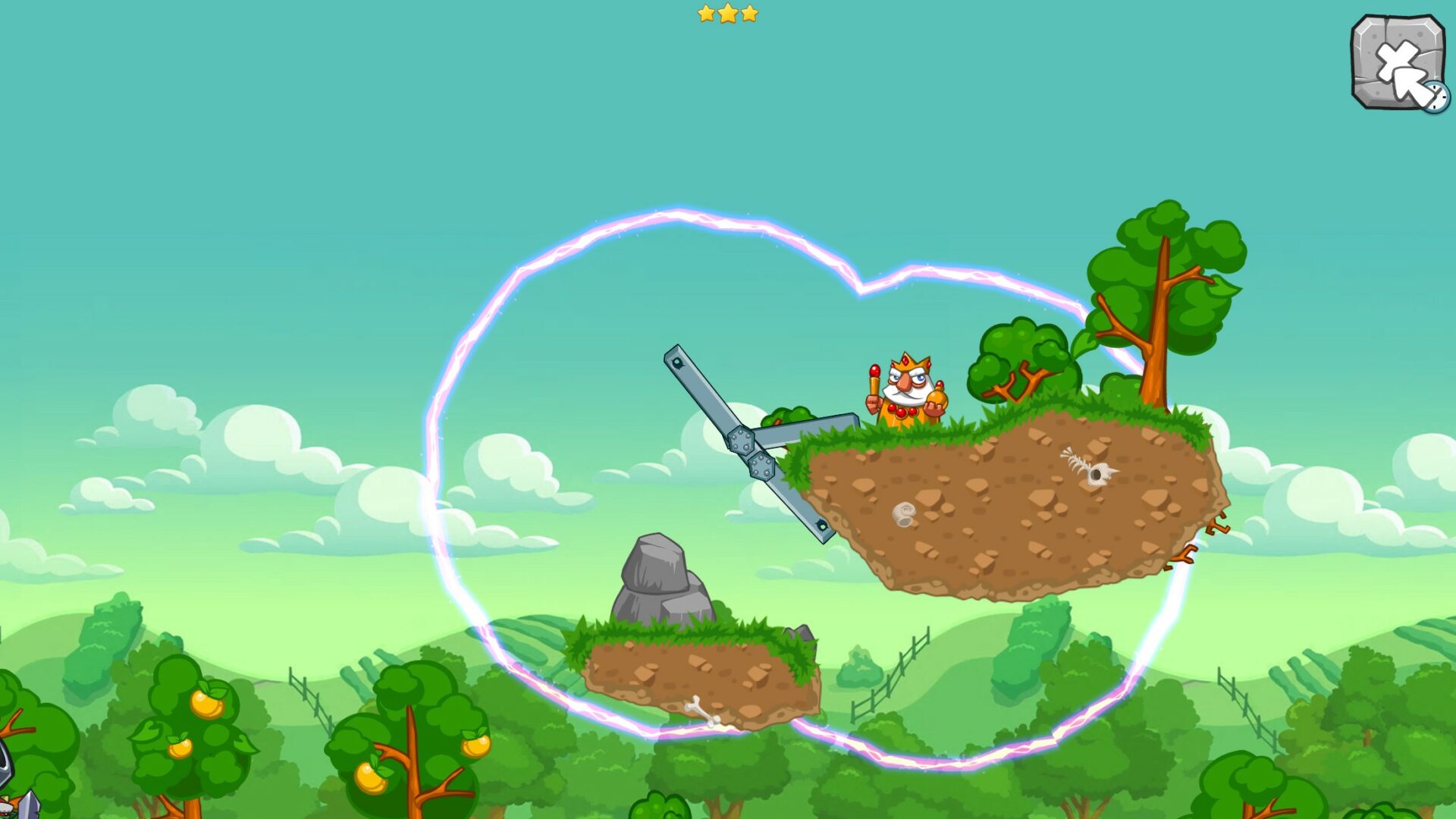 Graphics
This game sports the very familiar, very glossy cartoonish graphics typical of many mobile games, with simple stylized models and game objects, though of good quality. Effects such as explosion are basic and nothing special. There is no evidence of the use of any advanced shaders, shadows, ambient occlusion, and so on.

Sound
The sound is neither special nor awful; the game has sufficient quality stock sounds that are not very inspired, but not terrible either.

Quality of Life
The game’s control system for building works decently enough, except it would be good to have more advanced options such as cloning, snapping, or locking of parts while building, in order to build more accurate structures with less effort. Obtaining planks of the same length or putting blocks accurately one onto another currently requires precision and calm, or else everything will slip away and crumble; some better tools to ease constructions would be welcome.

There are no quality options, resolution options, or volume sliders. This forced me to mute the game’s music because my ears were going to start to bleed, since there was absolutely no way to lower the volume. The same goes for the sound effects.

Bugs / Issues
Sometimes the king or his servants will just randomly die for no reason, and repeating the siege agin will maybe make them survive … it is just random sometimes, really, but since you can retry unlimited times this is not a critical issue. I didn’t notice any other bugs. 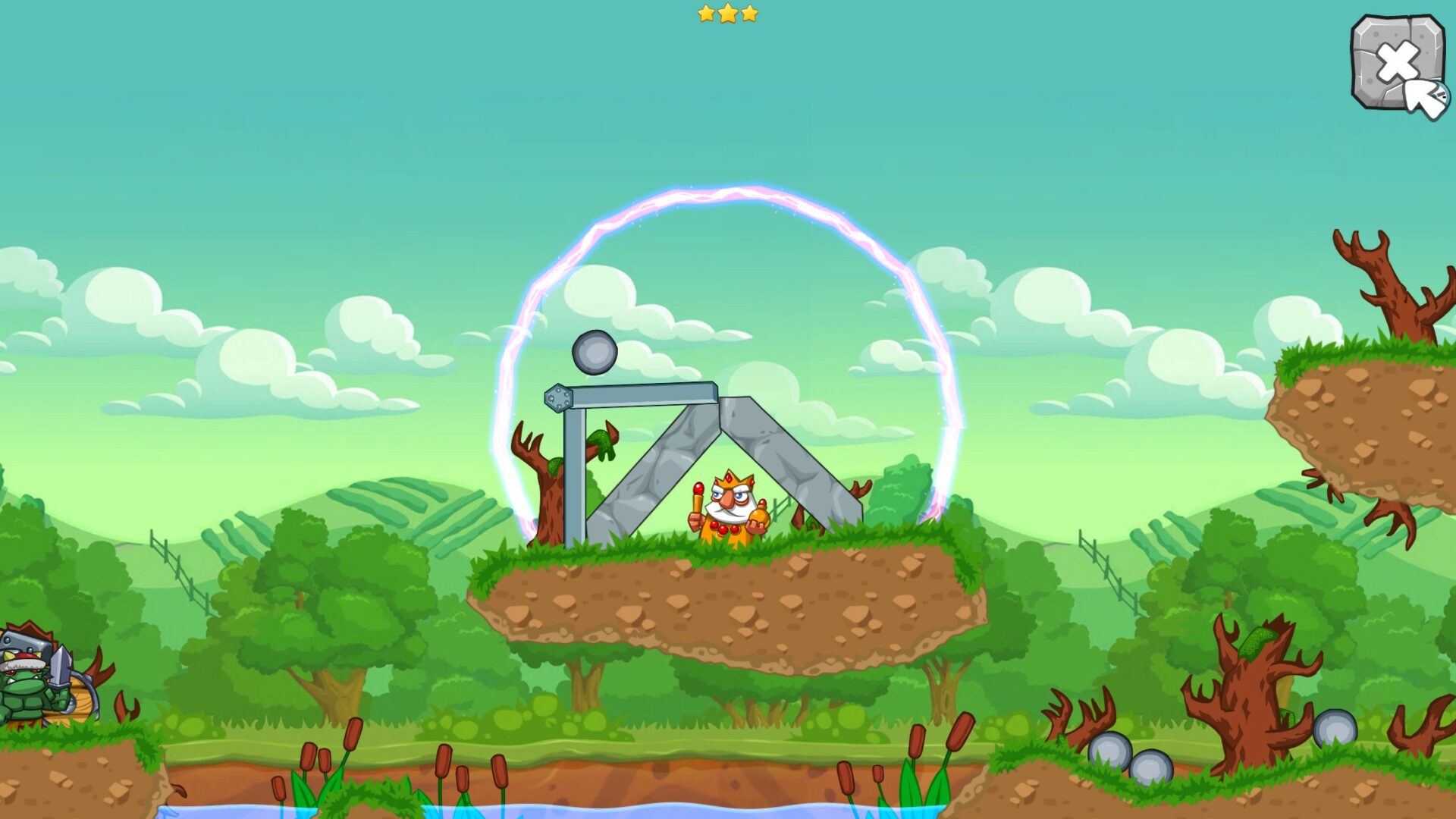 Siege Saga is a nice little puzzle game that has some good concepts. It plays sort of like an inverted Angry Birds, which works well and keeps gameplay simple. It might not be the fanciest or most complex of the puzzle games out there, but if you love puzzle games you definitely want to give this a try.