REVIEW: King of the Couch: Zoovival

Another 4-player party game, but with a few interesting quirks.

Casting for the Zoo

There are many ways to become King (or Queen) of the couch. One way is to be cast in popular movies of dubious morals, another way is to play Zoovival, a local and online multi-player game for four.

The lobby quickly teaches the controls: left bumper to use a grappling hook, right trigger to use the current weapon (found in a crate). Some players might get confused as a double-jump or a wall-jump can be necessary to climb to the door which launches the game. It’s all good on paper, except that in practice the movements feel a little bit awkward. Nothing major, it is probably due to having 3D models rather than the usual frame-perfect 2D movements. This observation should in no way hinder the enjoyment of the game.

However, before finding anything to enjoy, there is the base game mode. Players can pick among different classes with each a set of three weapons, and while the common theme for each set is a nice touch, in reality they are wildly unbalanced. Case in point, the cowboy-set has lots of good guns and the ninja-set has only one efficient weapon (the sword) but it leaves the character stunned after each use. Since only one weapon can be carried at a time, the ninja’s invisibility is often useless as the cloud of invisibility can still be noticed by everyone. At least it can lead to a kill that was hard to pull off. There are fun sets though, like the Xmas themed one with lethal decorations and reindeers with a strong knock-back, or the French one with killer baguette and rolling cheese. Some weapons kill in one hit, others only knock back. 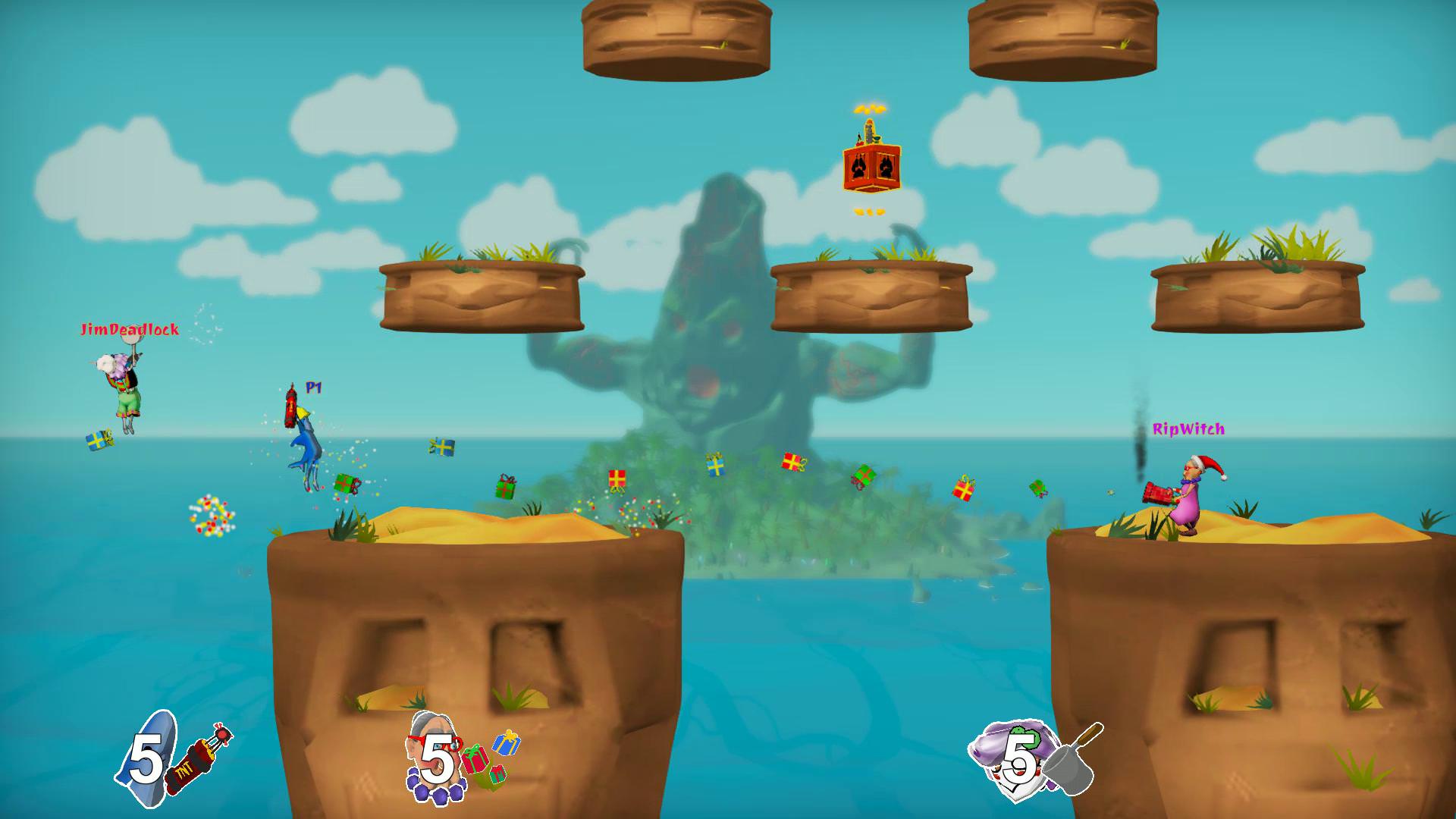 The game mechanics are totally different for each weapon, which is an amazing feat. The way we enjoyed the most the experience was by allowing all weapons rather than being limited to player classes. This meant that there was more variety to the situations and it was more hilarious to randomly find a dud rather than feel limited to it. Although, I guess it was still better to pick classes when we started, just to get used to the weapons on offer. The learning curve is still quite quick, although the grappling hook requires a bit more use. Not that it is difficult to learn, but the maps are sometimes filled with traps and it becomes important to know when NOT to grapple.

The maps were for me the star of the show, with pitfalls to push enemies towards, background pirate ships shooting cannonballs on the arena (with a stressful but useful aiming reticle), fishbones to impale your friends, and so on. Great stuff in here, and it helped for the experience to feel diverse and varied.

Another way to enjoy the game was to force one weapon only, such as the dueling glove which triggers a stand-off. The screen goes still, and the rivals wait for a cue on the screen telling them that they can shoot. The fastest shooter then kills the other. 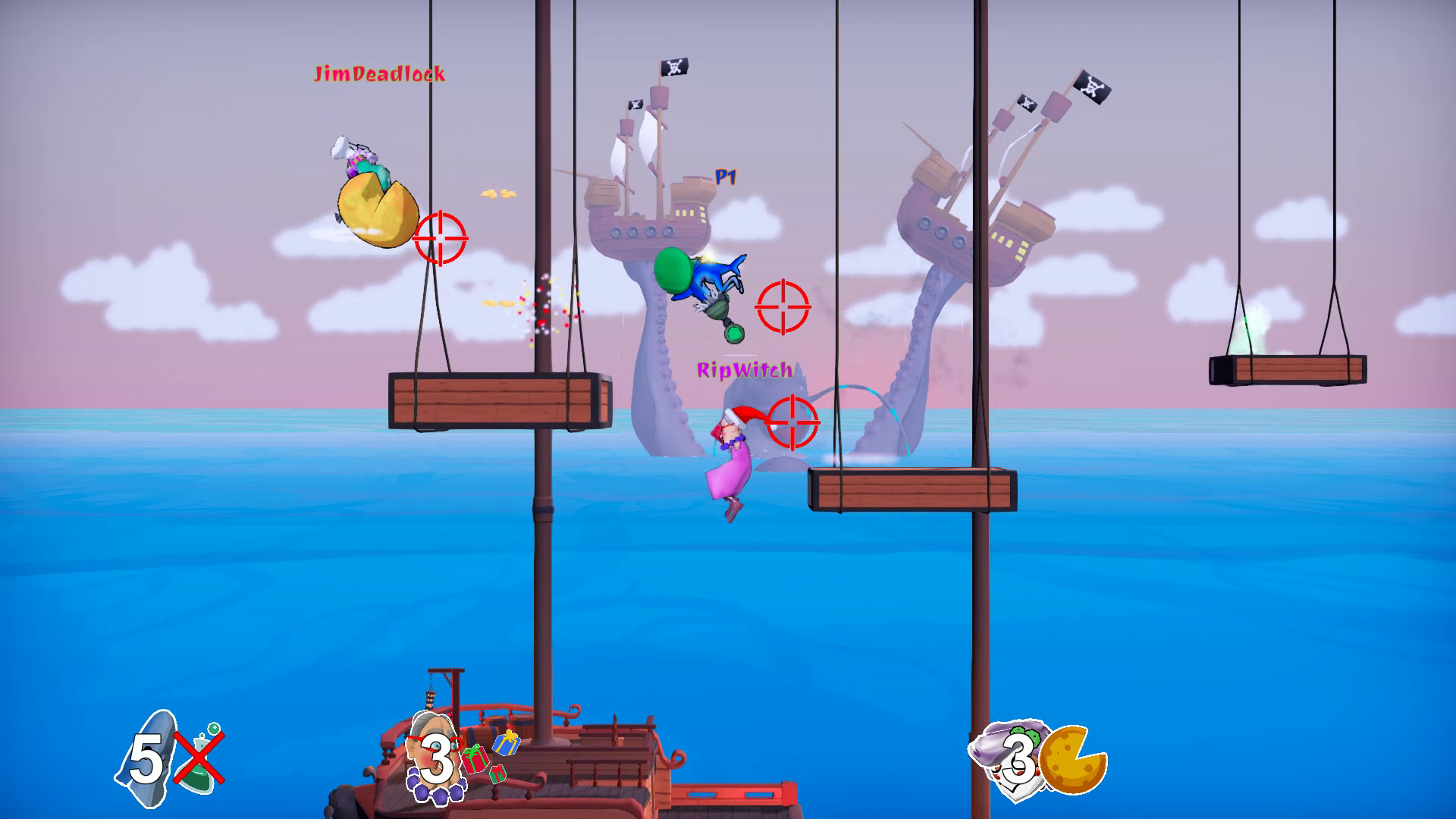 The games runs well at a high framerate. We were very surprised not to feel any lag between separate continents, which is a testimony to a very good netcode. However, there were occasional desyncs that were resolved once a specific player died. Not a game-breaking bug, but it can be a sudden surprise. What was a bit more annoying was that we needed fo create a new lobby to invite friends each time that we touched the weapon settings. Thankfully, changing characters and maps did not require to break the party. There are no bots, so make sure you play with enough friends.

Artistically, I was not seduced by the graphics, although some of the characters are funny to look at, and their winning dance is adorable. The shark with legs drew our attention, as well as the amazing granny which reveals herself to be the big bad wolf on her last remaining life. Pretty sweet. 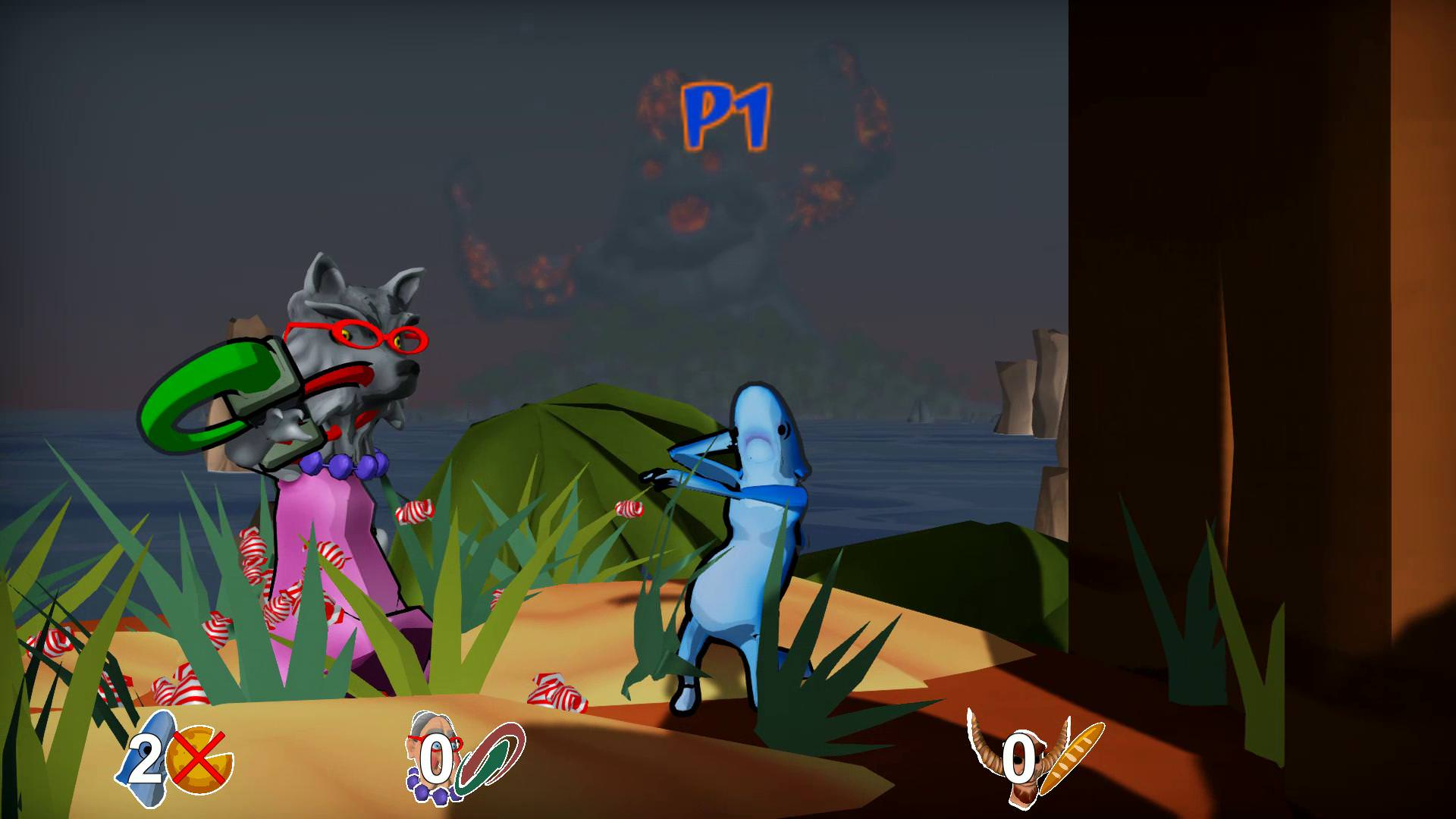 King of the Couch: Zoovival would suffer from balance issues if it did not have the great idea to allow total customization of the weapons loadout. It takes some getting used to all the possibilities, but it happens quick enough. I found that I had seen everything within a short time-frame, but then we kept having fun for quite some time. I would not say that it is one of the greatest 4-player games, it does not feel as tight and polished as its best competitors, but it provides fun and variety if you need a change of pace in your evening with your friends. The online capabilities are a non-negligible feature!