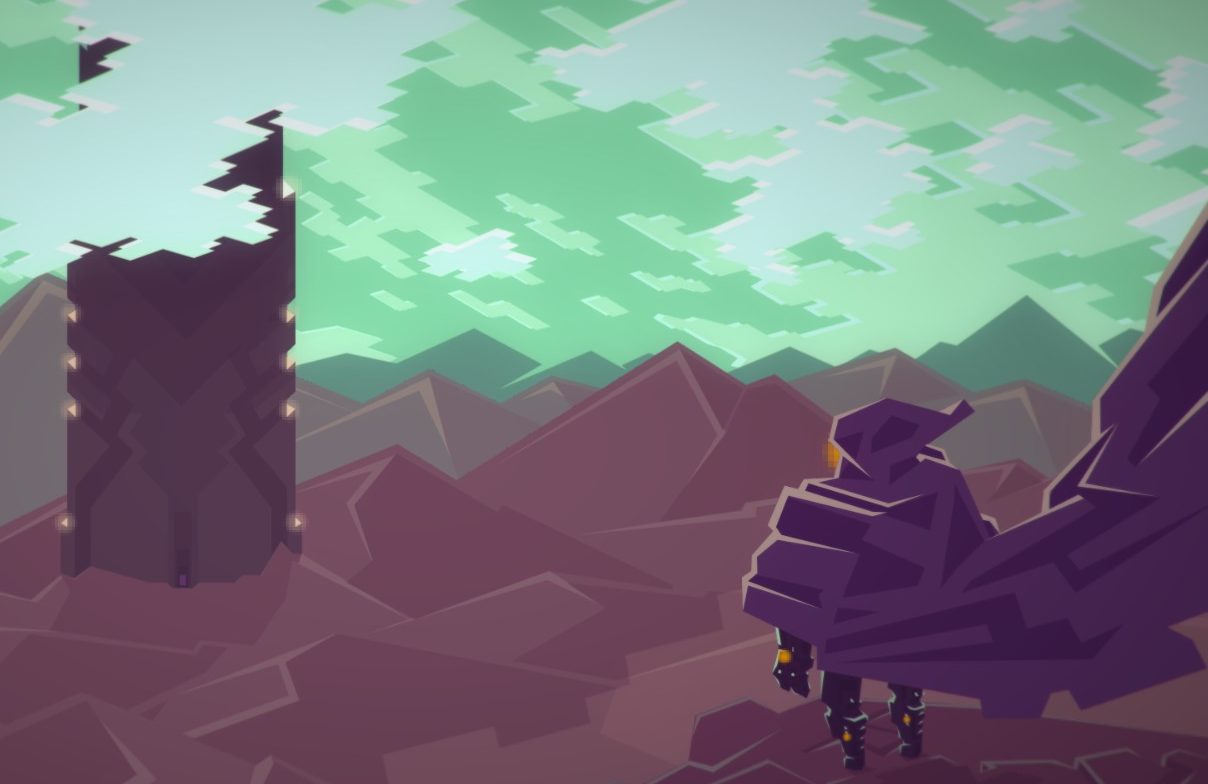 Come here ya bugger, I just want to slap ya with my sword a little bit!

The basic story in Violet Cycle is that you are tasked with getting to the top of the tower, which involves ascending 13 floors. On each floor, in the break area, there are statues which also give small story snippets. These seem to be random as far as I can tell, which is a weird choice, and also need to be viewed twice to get the full transmission. Some of these are very confusing due to the wording and the jumbled way that you will see them out of order. It would be nice to have a section where you can see all of them in the order they’re intended to be in and those that you haven’t seen more prioritized. Perhaps once everything is fully implemented, these will be based on what floor you are (a certain transmission will always be on this floor) as it’s a gamble if you get one you didn’t already see or one that you already saw. Right now, I have no idea whether or not. I read all of them as the percentage is above 200%. (An update that just went through a day after I wrote this just implemented transmissions to correspond with the floor, but it also wiped my save…) 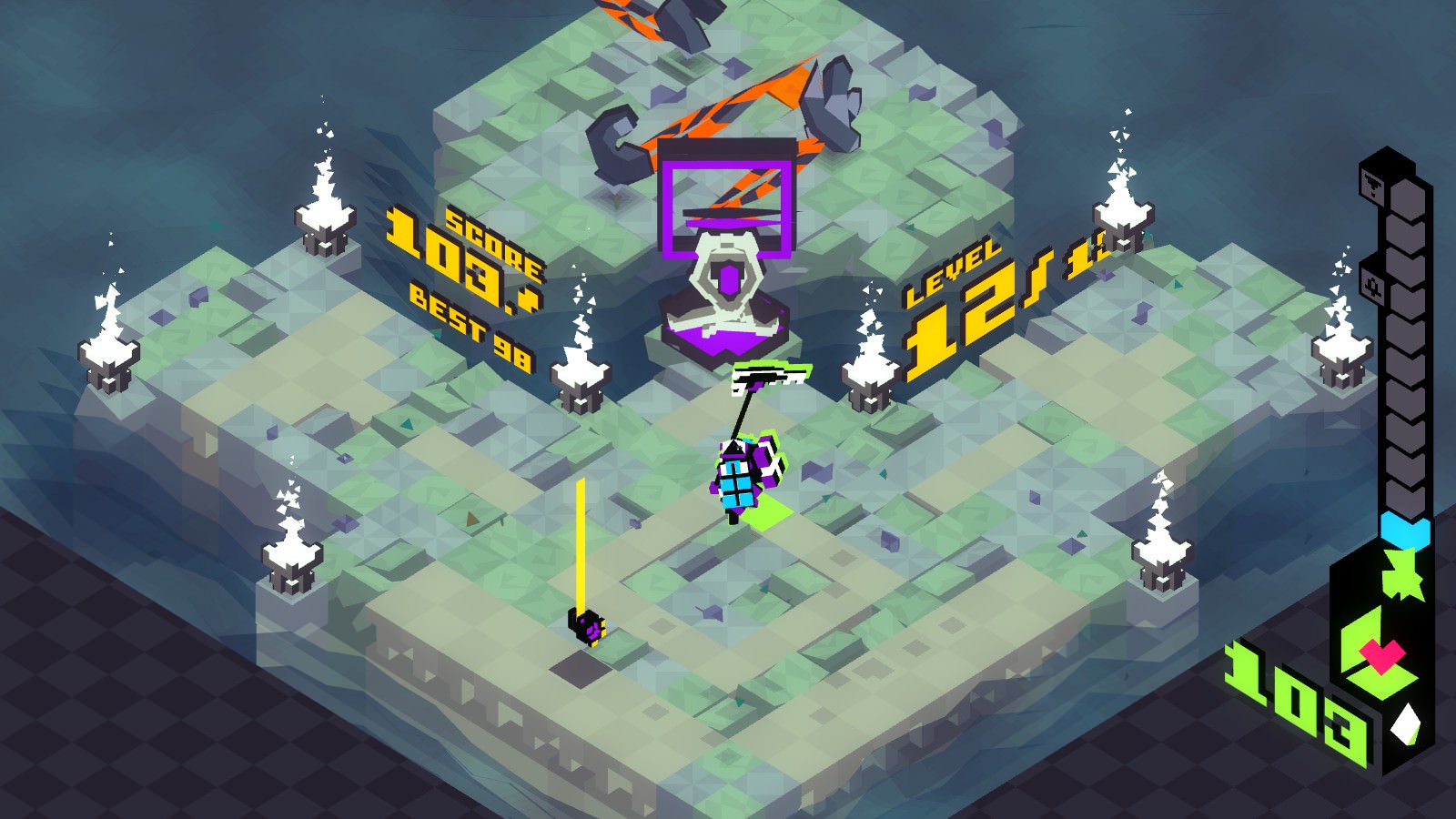 Currently, the procedural generation affects the layout of the floor. There are gaps and different tiles placed wrongly where random debris piles are located along with weapons, headrings spawns, and enemies to be summoned. Let’s go through all of them separately:

Each floor will vary in the layout. Some floors, which are usually the first couple of ones, will have no gaps, but most floors you will come across will. These gaps can just be one block, which you can easily climb onto without dashing, or a couple and will vary in position. Random debris piles will also liter these floors, along with long flowy grass, and some objects that cause player harm. This can range from, I can assume, a bomb, to spikes, or even lasers.  Whichever one you get will be colored red so you will know. Lastly, there are different tiles placed around that can be a bit annoying. Right now there are three different types, a dull blue which seems to act like ice as you can slip and slide more, a dull orange with stripes that quickly throws you to the end of the tile line, and a dull turquoise that acts like water and will give you a cooling effect when you walk on it and disappear once used. 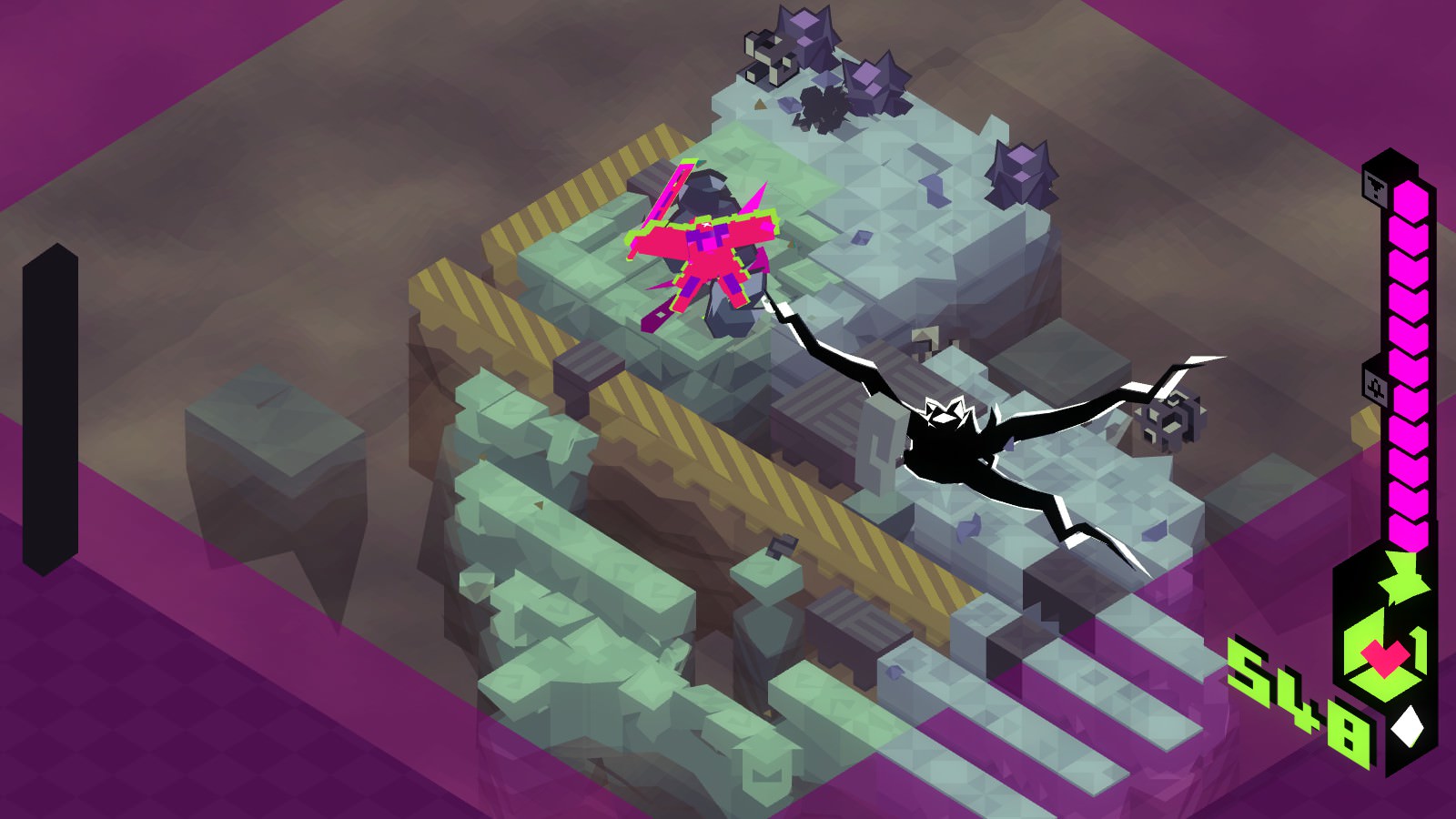 Of course there are weapons, but there is another item you can use to combine with your weapon called headrings. These headrings range in passive effects such as faster cooling to be able to deal more damage. The weapons are all melee which can vary in preference from person to person. Each have their own heat generation variants and how far their reach can be as well as their special attack. This heat directly feeds into the cooling that has a lot of influence on the combat system, as you have to keep an eye on it. Each attack will have how much heat you generated (white->blue->yellow->pink), as well as dashes added to it, but once you overheat you can not attack till you fully cool down. The special attack each weapon has comes into play here. These special attacks can be activated if you’re heat level is on yellow, but even then, there is a catch. When you activate the special attack, you have to kill an enemy so your heat can reset, or else you will jump up to overheating. 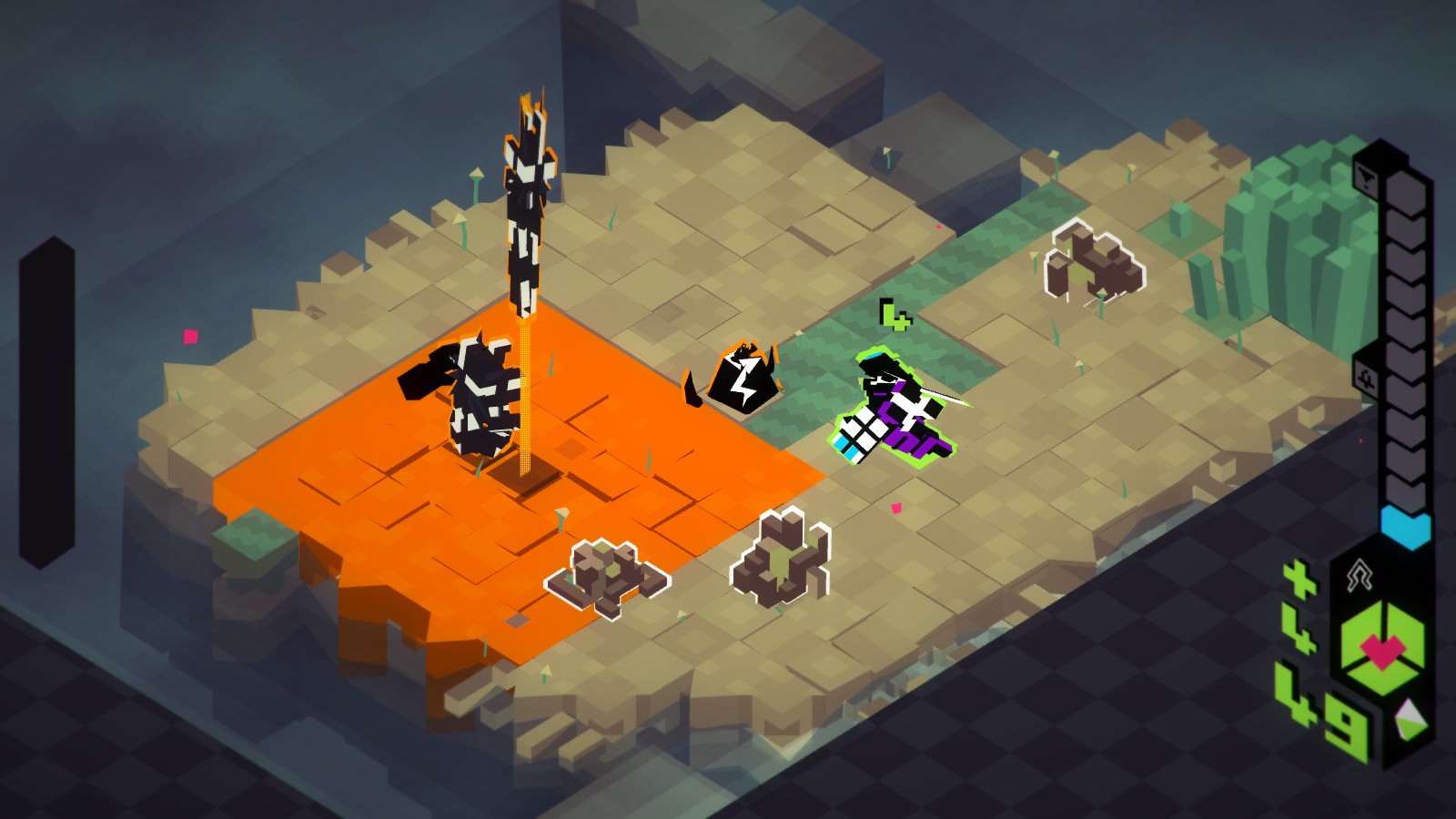 These weapons and headrings act as their own lives. Every time you die, you will lose either your weapon, the headring, or both, and if you discovered another weapon and/or headring that will guarantee you to come back. However, a recent update recently messed with this. Before, if you found multiples of each they will stay with you as you advance, and when you die they will stay, but now only one set will stay when you die and weirdly the only weapon that will stay is the hammer now (which I personally don’t like). I’m not sure if this is the intent compared to what it was, but it would be great to have that choice back rather than only having the weapon and headring subjected to rng and the others be thrown away. In addition there are special abilities, which can range from blocking to hyper dashing. However, I’m not exactly thrilled with how blocking is a special ability as it’s a standard and blocking helps a lot in keeping yourself alive. 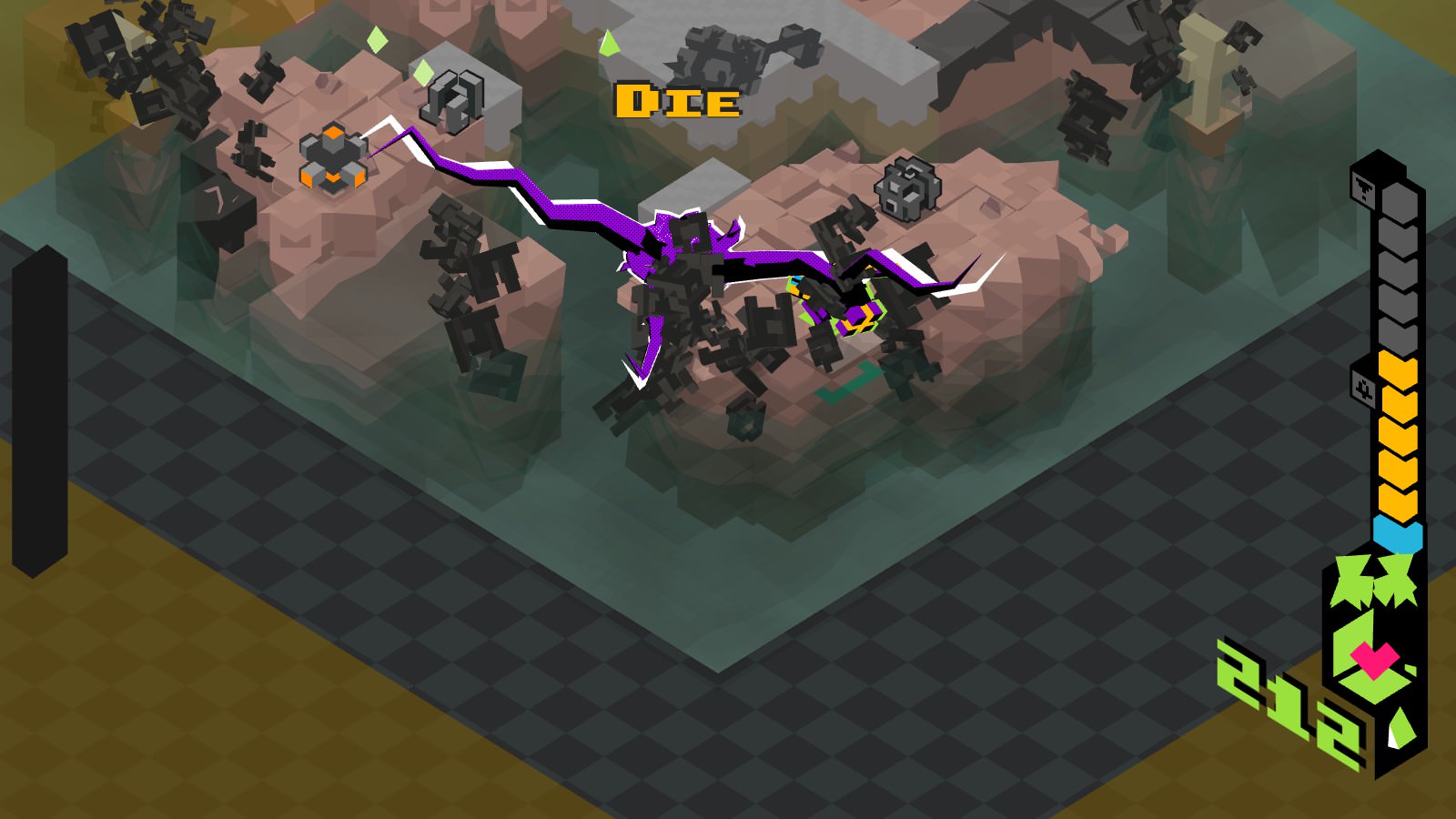 Lastly, there are a variety of different enemies. Depending on how they look, they will have their own method of attack, as one will like to bounce up and down while another will like to stay up in the air where they can attack with a spear or with their gun. Others will have enhancements such as spikes or a block that can grant them more opportunities to deal damage or block respectively. The color of the enemy will also have an impact on how they act. While there are normal enemies, there are red, green, and a newly added blue colored enemies. The red enemies are more aggressive, the green enemies will dodge you more, and the new blue enemies are the faster counterpart in both when they come down and when they attack and move. Knowing these different types will be highly beneficial to staying alive. Once you defeat them, they will drop seeds, which will be your score and will bring up shields that allow you to be hit more than once before dying. On top of this, there will be a wiggly eye, which summons them in the first place, but you have to defeat all the summoned enemies before you can hit the eye again. However, there are situations where the eye will open and try to disintegrate the floor, in which you can hit it even if there are still enemies out. 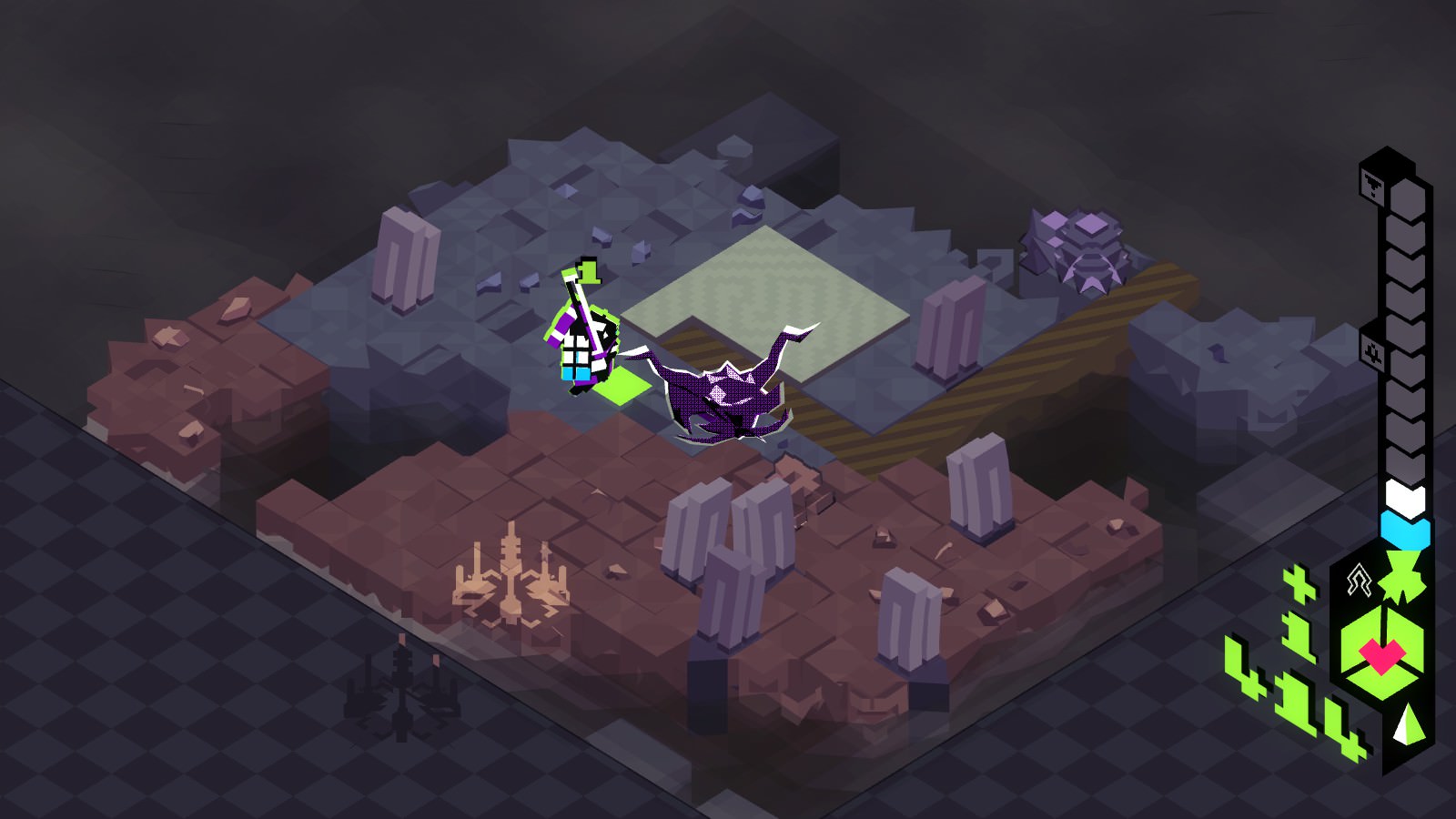 Both you and your enemy can launch yourself up in the air, but the elevation can produce its own problems. In the moment, it can be hard to determine if the enemy is in the air or on the ground due to a weird in-between area the enemy can be in. This can cause you to either go under or over the enemy easily and wondering where the heck the enemy was in the first place. Otherwise, it feels just the same as if you’re fighting on the ground if you catch the enemy on the same elevation as you.

I seem to have trouble keeping my combo up. Sometimes it takes a while for it to go down, but most times it will often blink in warning right when enemies start to drop. Which the player can’t exactly control as the enemies take a while to land and you might not be able to attack if they’re dropping right by each other. Sometimes the blinking will go down one faster than what is expected, or it won’t come at all and will drop down immediately. The combo does stay once the wiggly eye is defeated, though sometimes it also randomly goes down for some reason. In addition, the combo does go away when you bounce off of a level’s pile of blocks, which can be annoying especially when trying for the achievement, and when you use the weapon’s super attack, which I’m not sure is intended or not as it is a valuable resource to use to restart cooling.

Other than what is wrapped into the gameplay, Violet Cycle also has a problem with keeping your settings after you close the game. So every time you open it again, assuming your settings are not on default, you’ll have to redo them again. 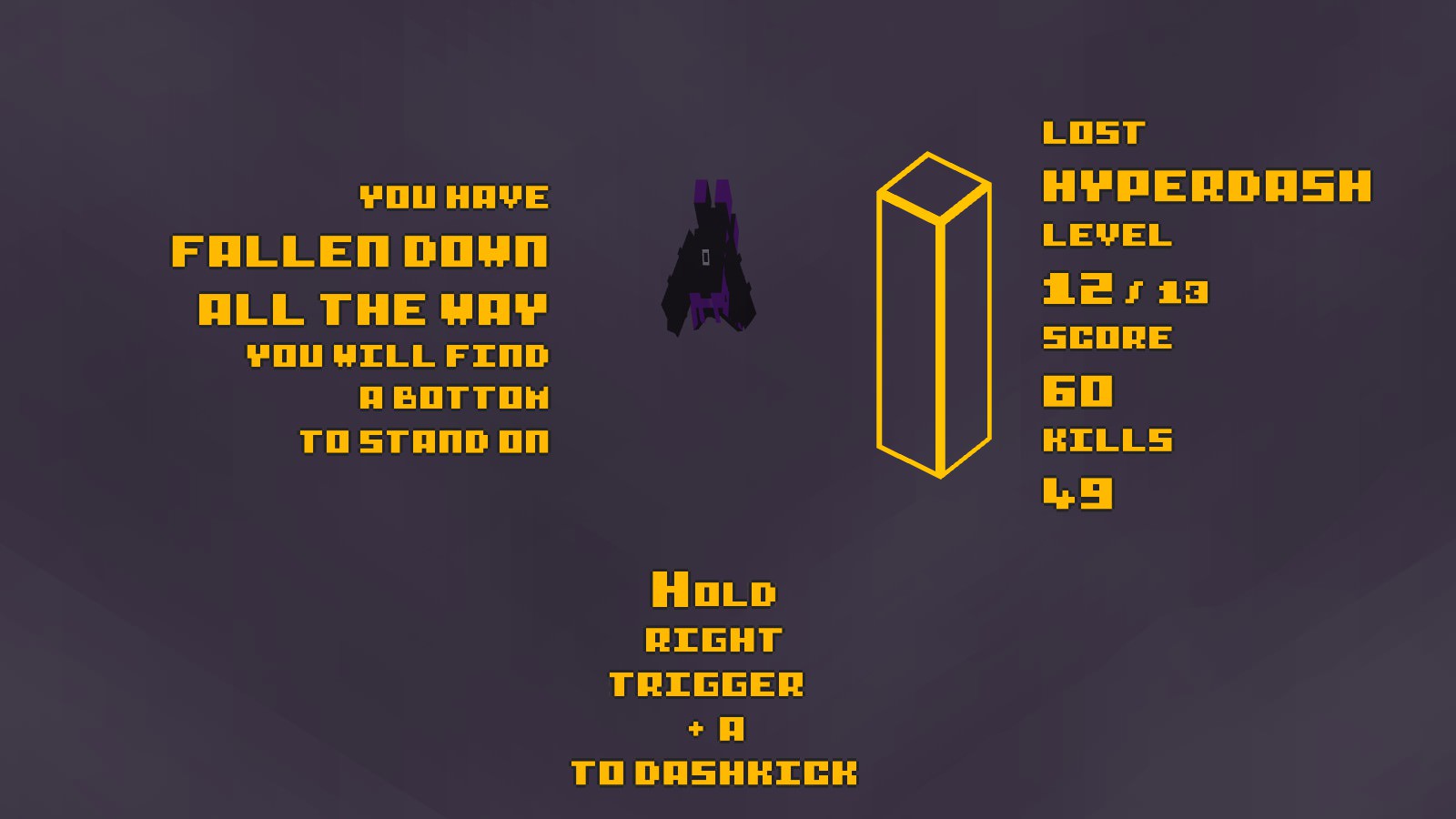 While Violet Cycle is fun, it holds some aspects that makes the game a lot more annoying. If this is a type of game you would see yourself playing and don’t care about it being in early access right now, go ahead. Otherwise, I would keep an eye on it for when it fully releases, which shouldn’t be long according to the estimated time provided by the developer. This is the rare instance where it can benefit players more by playing once everything is fully implemented and polished rather than before. I also would highly recommend the developer to post notes to what they changed or added in as this will help players understand what was changed/added and help those thinking about buying it know it isn’t being abandoned.