Visualnoveler’s Chaos Souls aspires itself to be in the vein of the Dark Souls series and tries to put the core mechanics into a 2.5D action side scroller, but it fails quite badly at it.

Chaos Souls is a 2.5D action-platformer mixup narrating the story of Eris, a half-cat anime style girl who is also a skilled demon hunter. One day her sister Petra is abducted by an evil Succubus, thus beginning her quest to go save her. After infiltrating the Succubus’ castle, Eris has to face many foes and bosses to free her sister.

General Gameplay
Chaos Souls is a very action oriented side scroller, inspired by the famous Dark Souls series because of certain mechanics inherited from it. The core gameplay consists of our heroine defeating “rooms” filled with a certain number of enemy waves of increasing difficulty. Only when all are defeated will the Dark Barrier vanish, allowing her to progress. The controls are pretty basic and straightforward, it is much better to play with a Gamepad rather than KB and Mouse. The depth level we talk about here is not high, the environments do not feature alternate paths, secrets, or special enemies. There is no loot / equipment system, so the only form of progression consisof in Upgrade Points awarded after defeating bosses. This is where this “souls inspired” game starts show its shortcomings.  In Dark Souls, one of the core mechanics is gaining experience from normal enemies to then upgrade your character and overcome difficulties. Such a mechanic is absent in Chaos Souls since the only upgrades are gained from only Bosses.  You can very well deduct what that means. Apart from this, there is not much else to talk about regarding the gameplay in general.  The game is all about combat and defeating rows upon rows of foes. 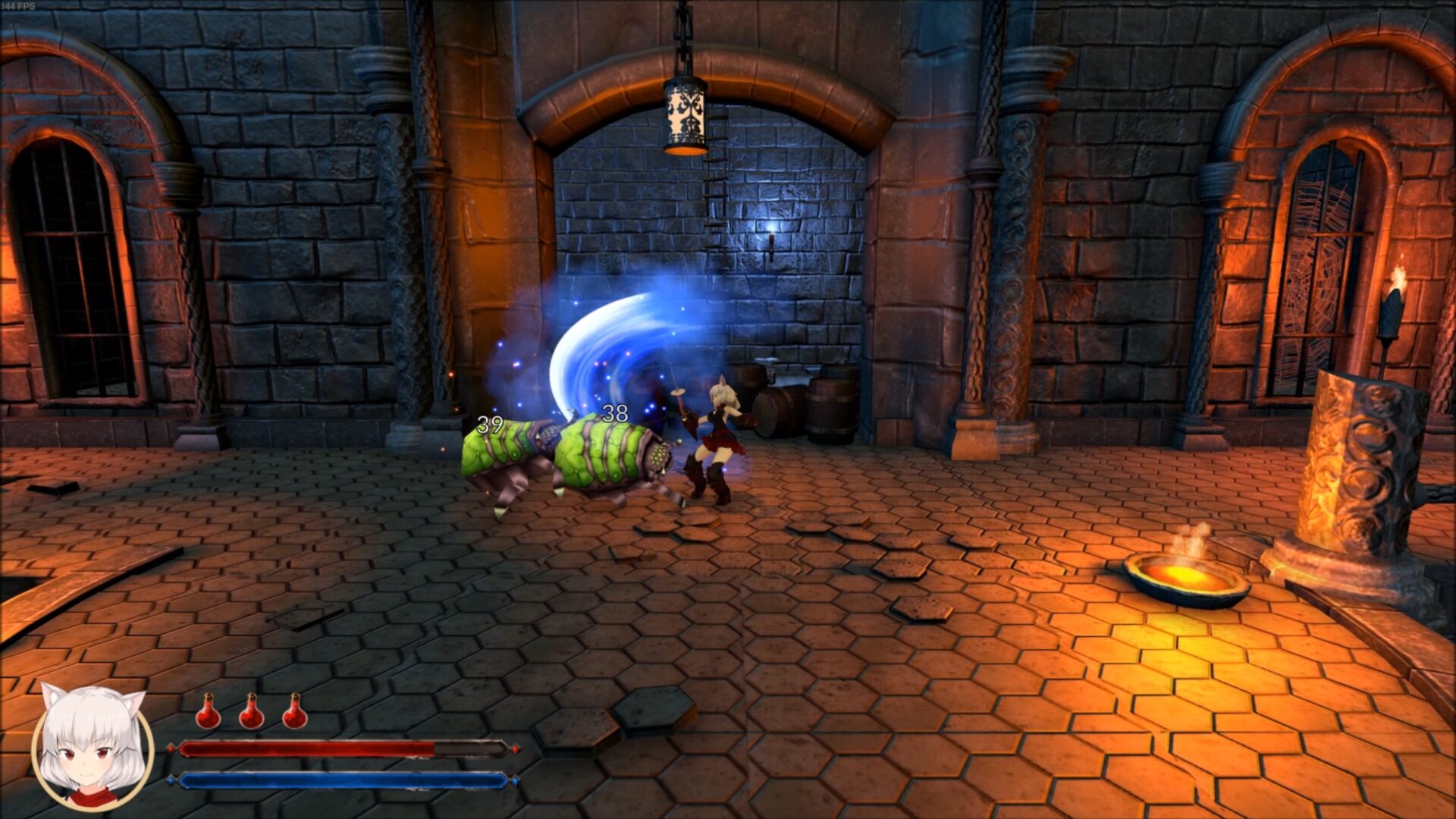 Combat System
So here we are, the star of the show, the Combat System. It is the spear-tip of any inspired “Souls” title and in Chaos Souls the only thing to really do is fight, so it must be a good system right? Wrong.

The combat in Chaos Souls revolves around different moves: there is a 4-hit light attack combo using X, a 3-hit heavy attack combo using Y (of course these combos do not need to be fully executed each time), a Ranged Attack with B, Jump with A, Dash with RT, use a magical barrier to shield from damage with LB while RB is for using one of the three available Potions to heal up.

So what’s wrong with it? A lot of things, frankly. First of all, there is no form of Parrying / Counterattacking.  The mechanic has simply not been implemented, period.  So, take off one layer of depth already.  Next, there are no signature checkpoints in levels like the Bonfires in the Souls series.  If you happen to be defeated, you just die and have to restart the whole section from the beginning.  Now, this also happens in Dark Souls but not with such long intervals.  Dark Souls even has multiple bonfires within the same area, yet Chaos Souls does not. This, united with the fact that regular enemies DO NOT GIVE EXP POINTS concocts a really frustrating and time-wasting combination.

The character movement speed is slow and there is absolutely no customization for class or skills, just a barebones upgrade system to enhance things such as Damage or Defense and a bunch of others. Hitboxes for the main character are inaccurate, you WILL be hit from attacks dodged 1 meter away and so on. Enemies have an almost nonexistent animation delay, they just stand in their idle animation and then, in a very unreasonably low timeframe, act and use skills/attacks in a blink.  This artificially increases the difficulty and is NOT appreciated by most, including myself, because it reflects the Developers lack of will to a construct more complexly layered system in favor of artificial challenge.

Content
The game features a decent variety of enemies, but the lack of an equipment system, no alternate / secret paths in levels, and a barebones upgrade system, put this title in the “low content” tier.  With regards to play time, I guess the game can last a good amount of time, depending on a player’s skill and willpower. However, it needs a much more complex combat system with articulated mechanics, not this incredibly basic system we have here.

Balancing
The balance is quite ruined because of the Combat System problems mentioned above.

Challenge
You will surely struggle, again affected by the poor development of the Combat System. 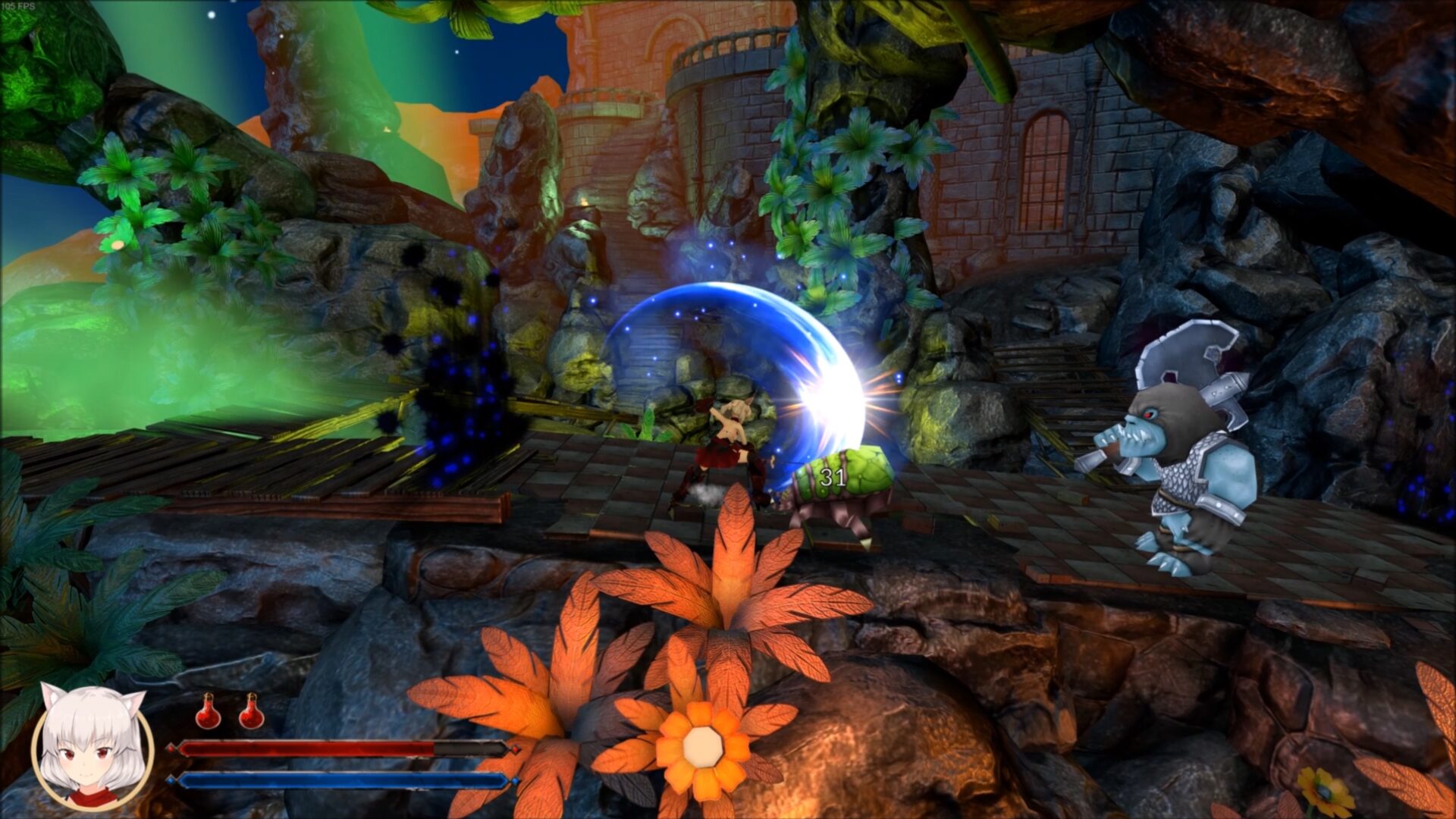 Graphics
I found the backgrounds to be of a surprisingly good quality, really, with quite a lot of detail and a good lighting system to give the game a definite look. The character and enemy models are of a much lower quality and it really stands out, almost as background and characters were made by two different teams entirely! Each drawing in the visual-novel style cutscenes is of a good quality – not excellent but not bad either. The particle effects are somewhat run of the mill with nothing special about them.

Sound
Nothing stands out about Chaos Souls‘ sub-average sound compartment. There also is no voice acting.

AI
AI is basic and will just use melee if the character is near while ranged if it is far, apart from that it is just a follow and attack script.

Quality of Life
Decent, for how little it matters in a game like this anyway.

Bugs / Issues
Apart those said in the Combat Section before, nothing else to report. 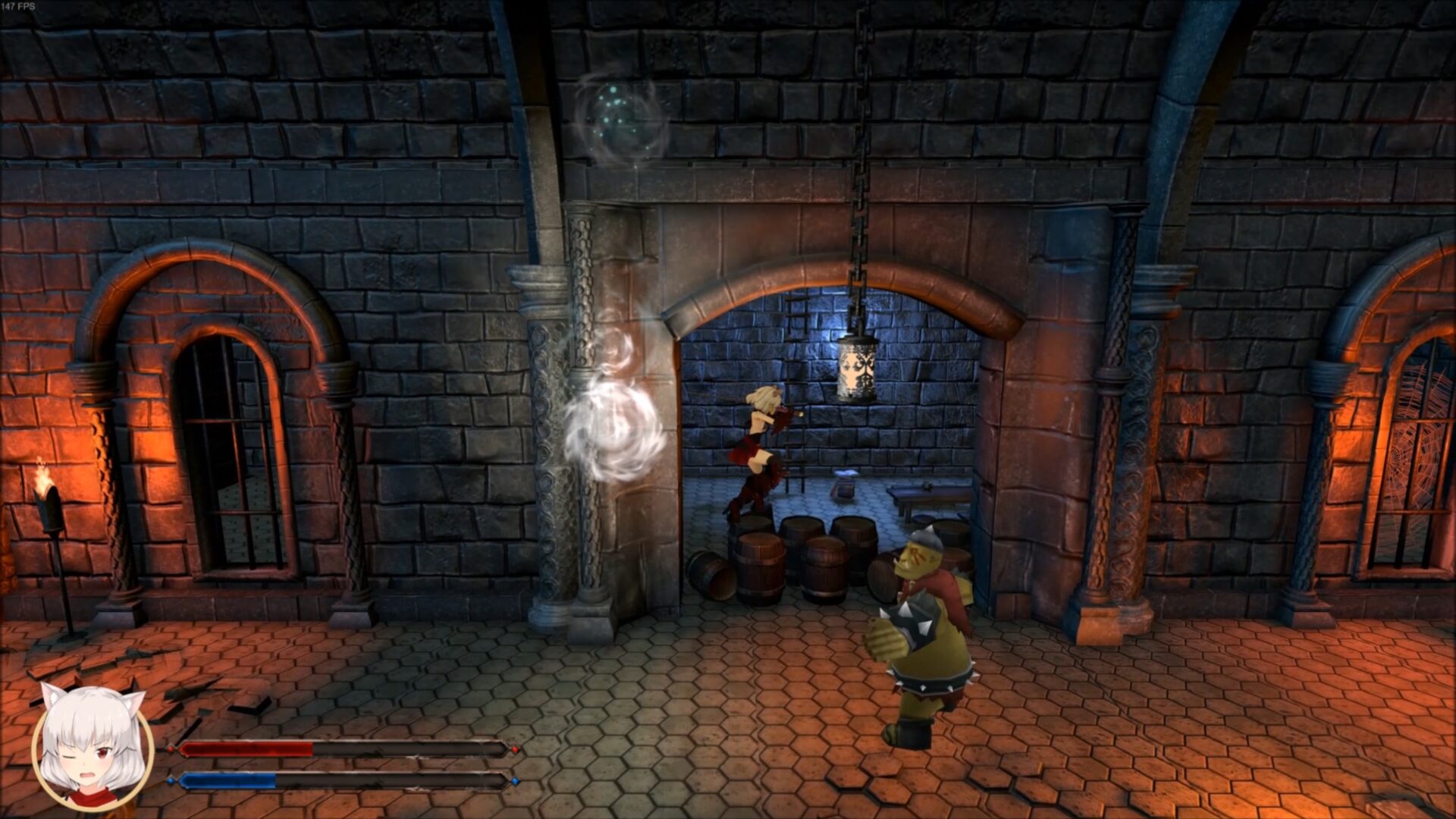 Chaos Souls is a mediocre action platformer that tries to follow in the same shadow of greater titles, but fails miserably because of both technical and quality limitations.  Unfortunately, this game is not recommended.