Bannerman is what happens when someone tries to make a game with an engaging combat system while focusing on that gameplay element alone and ignoring the rest.

As screenshots and the trailer for the game suggest, Bannerman is a 2D side-scroller, one which takes place in a medieval fantasy world setting. The story focus is pretty light, with most of the narrative exposition happening through conversations with various characters that you’ll come across, both friend and foe. Nonetheless, these sequences are pretty short and don’t really have any substance other than providing some basic context for the events of the game. It’s also always a shame to find out that the game isn’t voice acted, especially in one where there’s very little dialogue.

Given that this is not a game you want to play if you’re looking for an in-depth storyline or interesting characters, the fact that the game isn’t quite the looker also doesn’t help in immersing you. Personally, I’m not a fan of the game’s pixel art, although your mileage may vary, but thanks to the slow and methodical combat, the combat animations do look quite nice when everything is in motion.

Besides the story mode, the game also features an arena where you can practice, as well as a gauntlet mode in which you have to defeat a certain number of enemies as fast as you can. Due to the fact that this is a 2D game, the way to progress towards the end of each level is usually on the right side of your screen. Still, you’ll come across certain places that you can enter, like houses, as well as some side-paths that you can take, and thus the game does reward you a little bit for exploring, by commonly granting you pieces of armor that protect you during battle. With that said, the fact that even though you’re picking up things like a chainmail or a helmet, there are no visual changes on your character whenever you pick a piece of armor, which I found to be disappointing.

There is also another thing that really bothers me, which is the way that your character moves really slow, even when running. This probably wouldn’t be a problem if there was something in the game that managed to keep you engaged at all times but there is no such thing, and considering that you spend quite a lot of your time going left and right, the whole thing can get tedious pretty fast if you’re an impatient person like me. 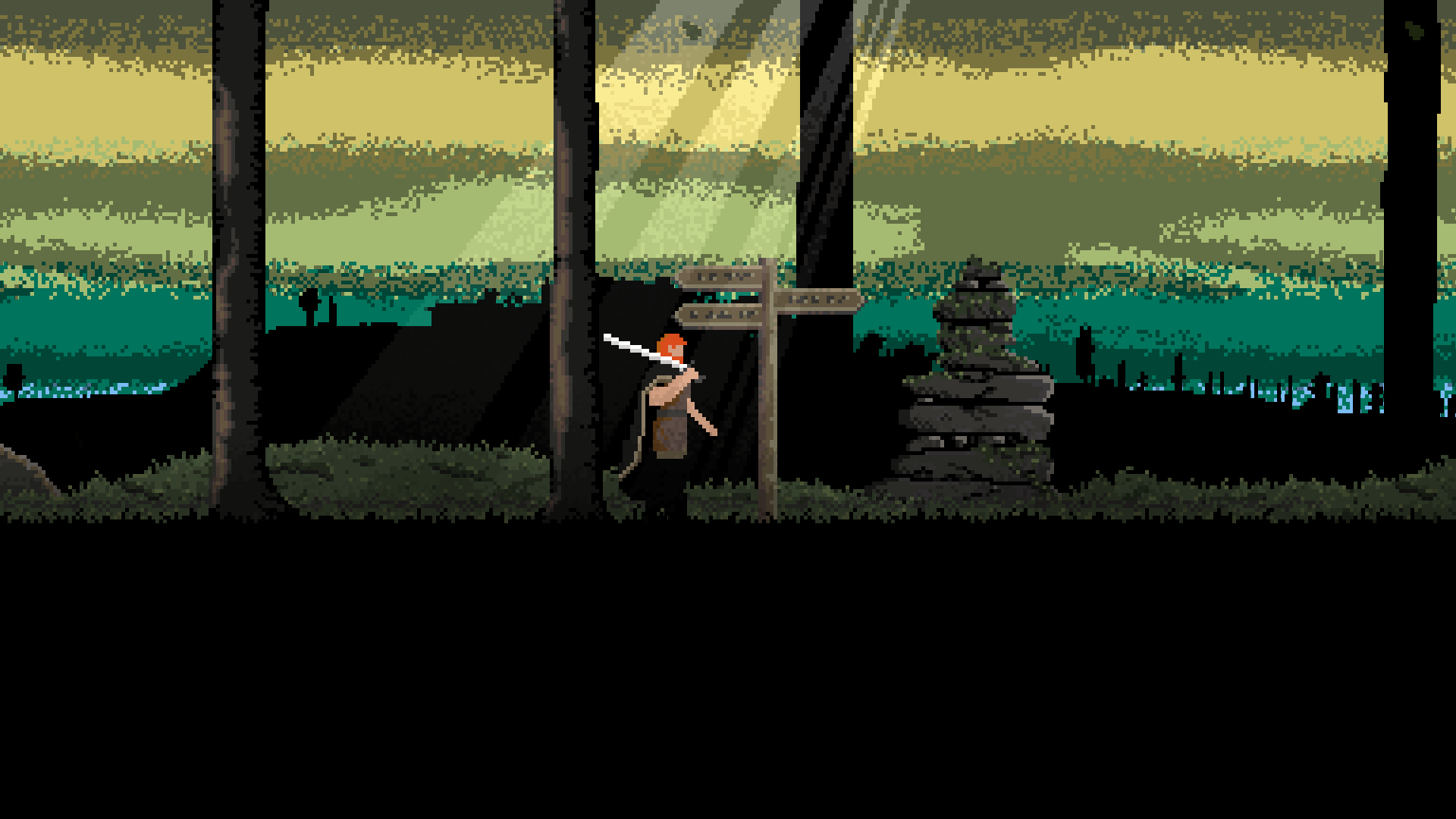 Speaking of which, the most annoying thing in the game, at least to me, is the way checkpoints work. As far as I can tell, if you die, the only thing that is saved on the level are the shortcuts that you’ve unlocked, enemies, and armor pickups will respawn. So, in other words, you start from the very beginning and have to make it all the way back to where you died, while also facing off enemies that you’ve previously defeated. In any case, the idea of having to defeat all the enemies all over again doesn’t bother me as much as having to “run” all the way back to the fight where I died, because your character feels like he’s carrying a heavy military backpack full of gear and can barely move.

Nevertheless, the main focus of Bannerman is clearly the slow, precise and methodical combat, which revolves around a stamina meter, a double stance system, and the use of heavy and light attacks. Throwing yourself towards an enemy will most likely result in a quick defeat if you don’t time it right, but watching their moves and adapting to their stance changes and exploiting them is the key to inflict the most amount of damage in as little time as possible. I must admit that in my first few fights I was a bit overwhelmed and struggling to keep up, but all you need to do is to keep an eye on the enemy’s stance. Being able to change between a downward or an upward stance allows you to do just that, deflect enemy hits, and strike while the enemy’s recovering his stamina or going for an upward strike while he’s on a downward stance (and vice-versa). 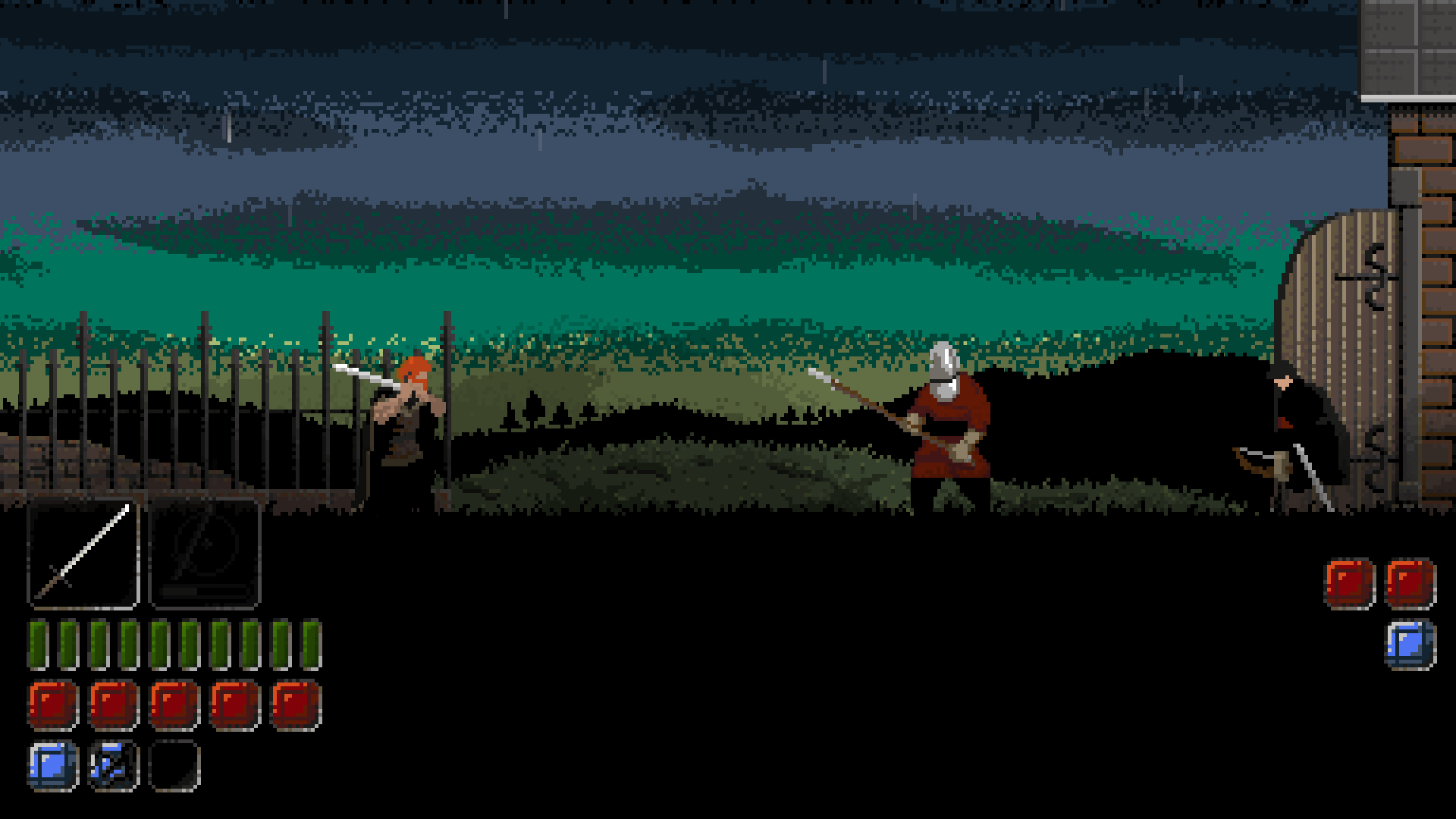 Thanks to this type of combat system, you’ll be mostly using a longsword, even though you’ll run into pickups such as a shield, or a bow with limited arrows, so there isn’t really much variety in terms of weapons at your disposal, which is disappointing in a game where the clear focus is the combat. Notwithstanding, the combat as a whole is fairly enjoyable, at least most of the time. The game features quite a bit of gore, at least as much as the pixel art style allows it to, so, when killing an enemy, it’s quite satisfying to see spurts of blood and the enemy’s entrails come out of their bellies. With that said, I have found myself with my back against a wall, while one or more enemies harassed me, and I couldn’t keep blocking their attacks because I either kept running out of stamina, or I didn’t have any room to perform a proper dodge. It’s in moments like this, where the clunky movement gets in the way during fights, that the game really becomes frustrating to play.

At the end of the day, I don’t really recommend Bannerman, at least not right now and with the current price tag. I don’t mean this as if this is a bad game, but I also wouldn’t call it a good one. The game sure has some nice animations, and a pretty nice soundtrack, as well as the combat system which may or may not be your cup of tea, but it ultimately fails to provide anything new or groundbreaking. There’s no story to keep you hooked, the dialogues are extremely monotonous, moving around the levels is boring, and even though the combat is satisfying, it doesn’t really have enough variety to keep things fresh and captivating. My advice is to take advantage of Steam’s refund system and see if it’s something that you’d personally enjoy, but I can safely say that my time with it has not been the best.