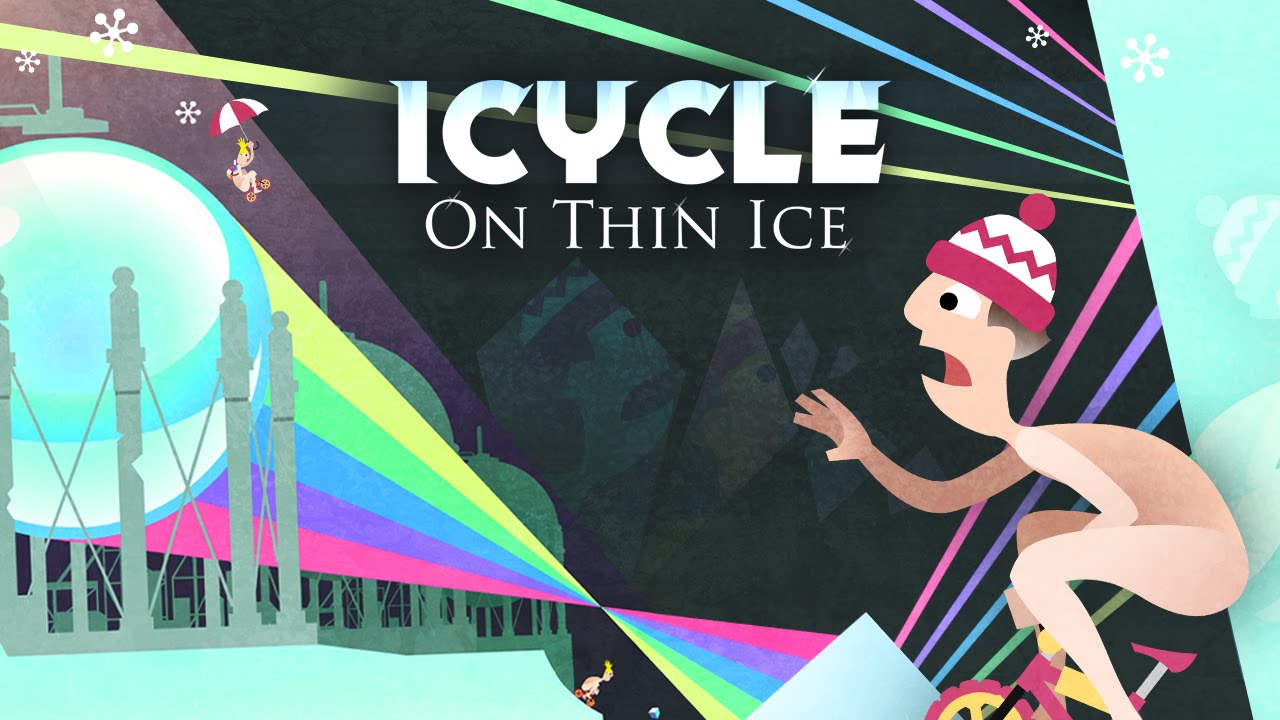 A brilliant platformer with backgrounds that change and morph as you progress through the levels.

The tip of the iceberg

Icycle: On Thin Ice was released on October 25th 2017 and I saw no mention of it anywhere. I was too busy in September/October to check what was released on Steam, then in early November I took it upon myself to dig through the stinky pile of Steam releases and browse hundreds of games. Oh, the horrors I have seen. Oh, the madness that I have endured. But I have an iron will and strong discipline, so I went through it. Why, you might ask? Well, games on Steam have a huge problem of discoverability. There are just too many games that are being released on Steam, thus nowadays many gems are born and then die in complete indifference. Think about it: developers who put their heart and soul into making a quality game for the past year(s), and then the fruit of their efforts gets completely ignored among achievement hunter deluxe, fidget spinner scam: no animation edition, asset flipper 4576, RPG maker borefest BUT WITH CLEAVAGE, and Kevin’s first zombie shooter. That’s why customers rely on reviewers to avoid the junk and find good games to play, and I must admit that things got so messy that even reviewers definitively cannot check out everything… and lots of games as well as the hopes of their developers will disappear into limbo. I spent mere seconds on the Steam page for most of what I saw. Can you imagine? Years of work discarded within a few seconds. But if reviewers won’t sift through the pile of games, no one will. And while I will certainly give a miss to games outside my area of expertise, I always keep an eye out for platformers. Conversely, as a platformer veteran I am hard to please and I will mostly not bother with “more of the same”. Among these hundreds of games, I stumbled upon Icycle: On Thin Ice and decided to give it a try.

While On Thin Ice was released without fanfare, the original flash game Icycle was at least a little bit known. The concept is attractive: the world has been frozen and a naked man on a bicycle is navigating through the beautiful and bleak environments. I don’t mean that this particular man is attractive, but the concept is. Problem was, the bicycle was not very interesting to use (it could only move towards the right) and the difficulty was brutal and considered unfair. It seems like the lone developer of Damp Gnat learned from this because On Thin Ice is completely free of these issues. By the way, the same person did the coding and the art, which is impressive. Additional help was given for the audio, and that part is good too. Upon starting a level, our naked bloke will sometimes send a high-pitched scream that will echo throughout the frozen landscape. Chilling. Literally, as the poor guy is shivering on his bicycle even in the menu. If that is not enough incentive for you to go through the levels and unlock gear, the secret levels requiring specific pieces of clothing will be an additional motive. Because in these games the levels are so gorgeous that you will not want to miss a single one. 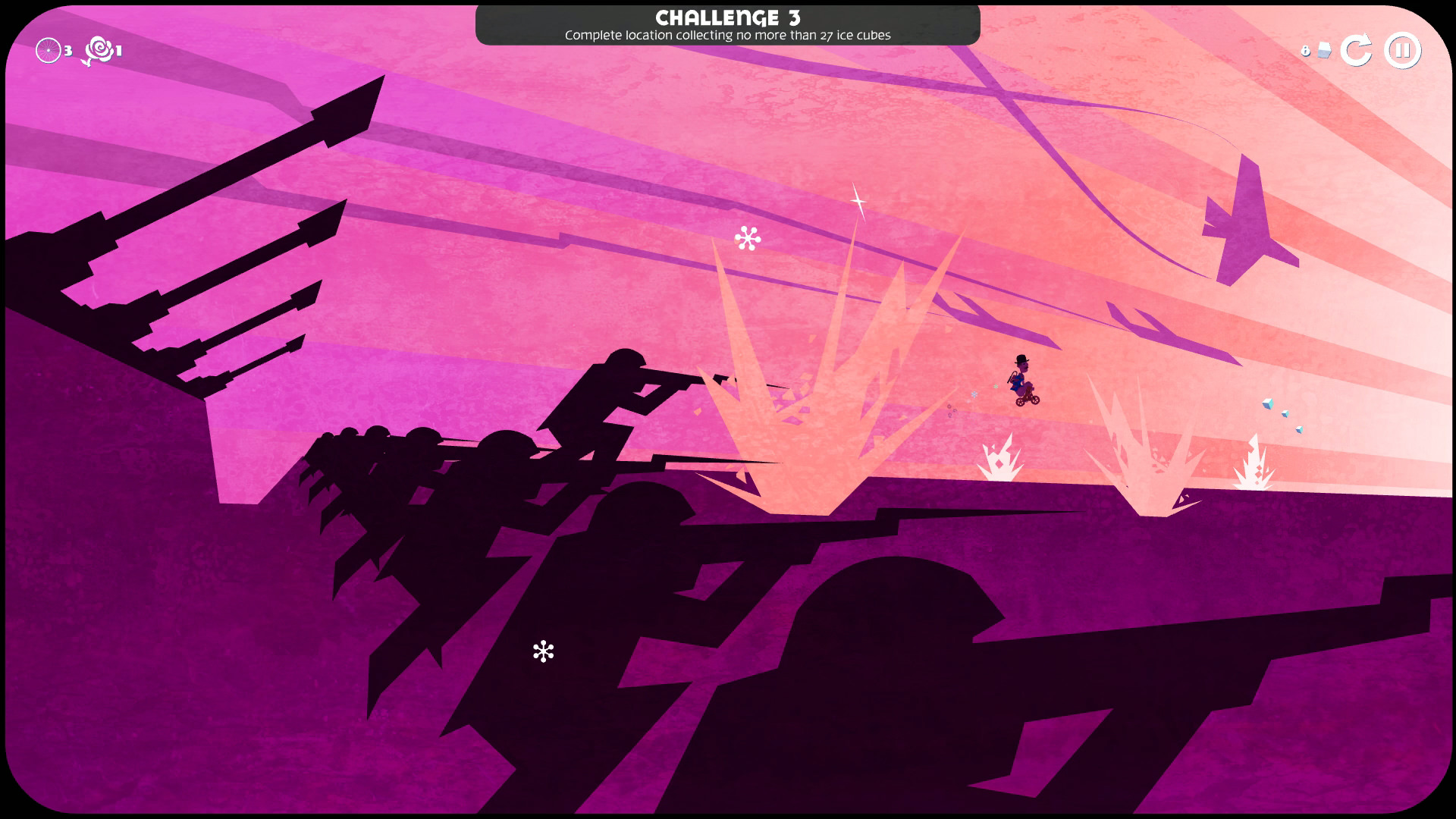 I have been itching to tell you why I think that Icycle: On Thin Ice is an amazing game, and here it comes. Notwithstanding the gorgeous art design, the game level is actually moving as you go along so that the levels transform under your wheels as you progress through them, from platforms rising out of thin ice to trees growing. If you have ever played a game from Vectorpark like Windosill, now imagine actually navigating the thing rather than just prodding it. There are many beautiful themes that serve as background, not just ice. From Magritte’s The Son of Man to a frozen war laden with dangerous bombs, anything goes in this surrealist game. I absolutely loved the experience. I felt like a kid watching marvels with little stars in my eyes. Remember when I was telling you that I am a platforming veteran? If a game can make me feel like that, it must be really damn good. 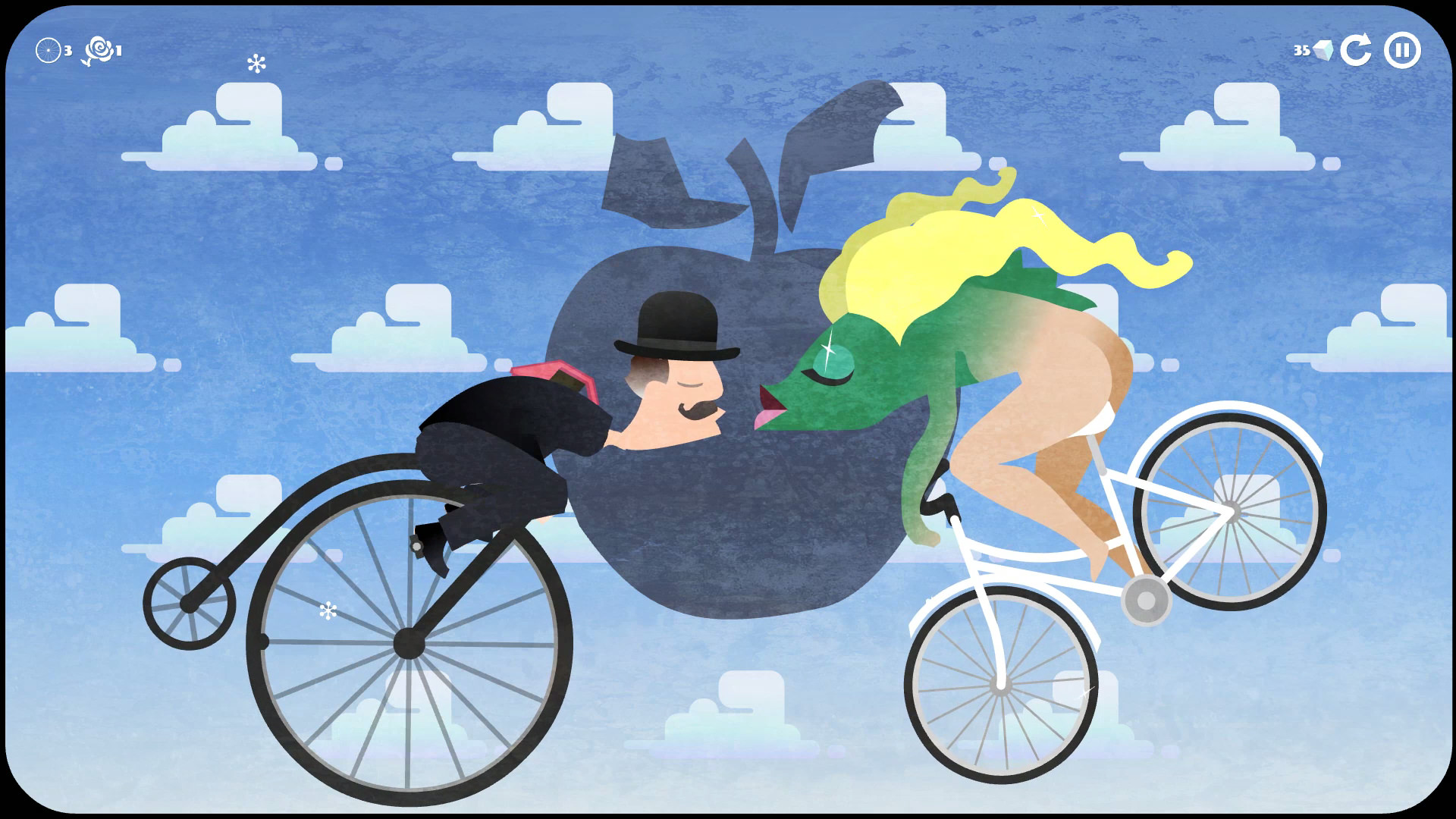 The art of cycling on ice

Since I mentioned the platforming, the controls have been vastly improved since the original flash game (which can be unlocked in On Thin Ice). It is now possible to cycle backwards without penalties, and it feels more like Trials without being as technical as the games from this series. Icycle: On Thin Ice feels more like a floaty platformer with a bit of momentum and sliding on the ice. While I usually use “floaty” to disapprove bad platforming feelings, here there is a physicality to the character that works wonders without being realistic. I find it hard to describe, but believe me when I say that the controls are tight and smooth while feeling different enough from other platformers to justify playing this game besides the gorgeous art. I would argue that the “floaty” feeling also comes from the fact that the naked man can deploy his umbrella in mid-air and gently hover in the same vein as Rayman with his helicopter hair. While this is not a unique mechanic, it adds a welcome layer of air control rather than just being a game on wheels. And that control will be well needed, as the levels start to get difficult half-way through the game. Nothing too brutal that a few retries won’t solve, and on top of that each screen is a checkpoint thus the player never has to restart from very far except if all lives were expanded and the (short) level needs to be started over. 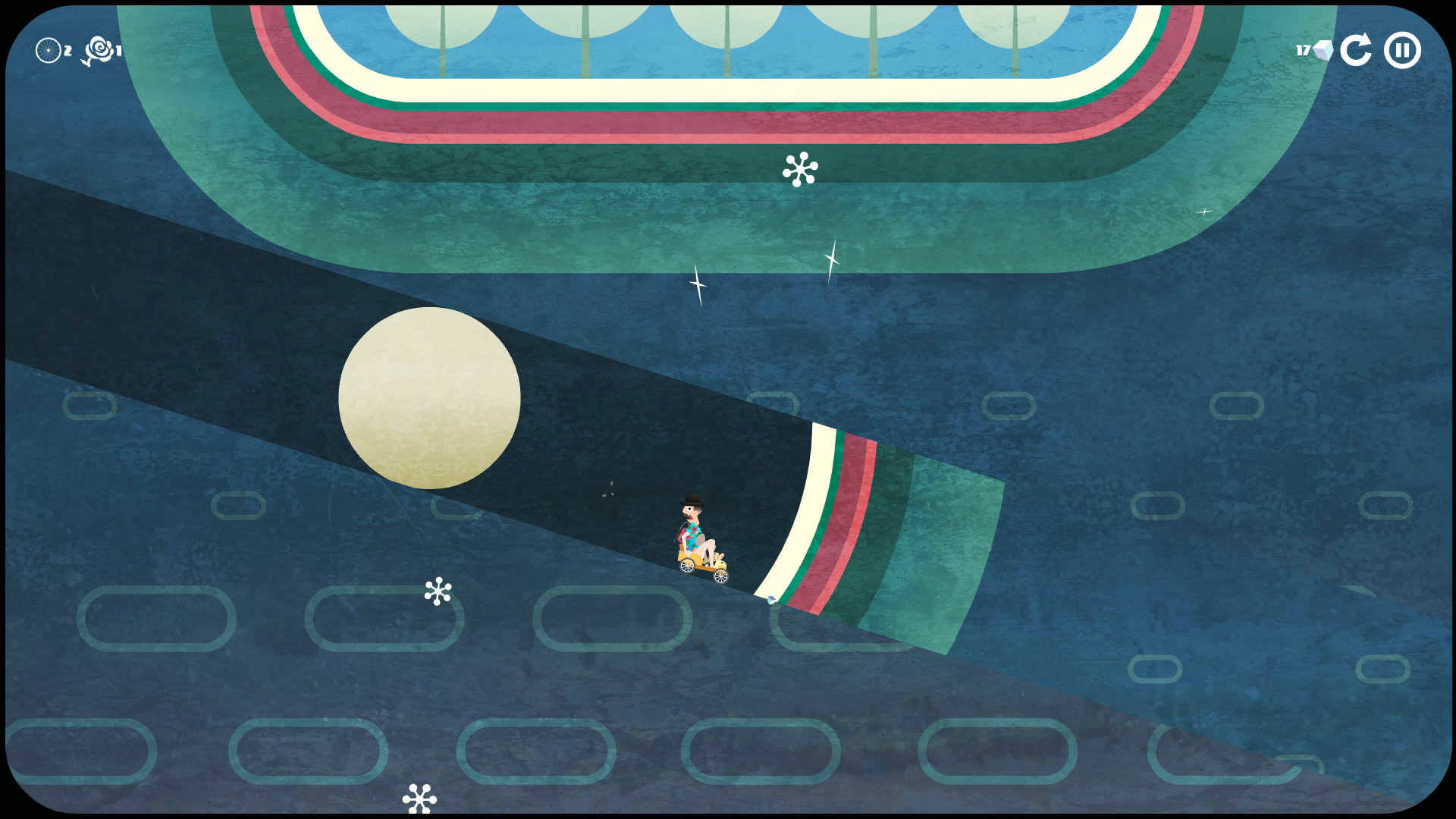 The whole game is quite short, the main story can be completed in about two hours. Considering the price of the game and the enjoyment I had, I would say that it is fairly reasonable and worth the price. However, there is more to the game than this as there are bonus levels to unlock, lots of clothes and upgrades to unlock, and alternate objectives to complete in each level. These objectives range from completing a level without dying to finding a secret area. The economy of the game is based around ice cubes to collect in the levels. They are basically coins to pick up, but what is interesting about them is that they are very well integrated as part of the level design. They are either here for an extra little challenge to divert you from a route that is too easy, or they are here to signal where to jump so that you do not get surprised when an iceberg suddenly rises from below. These might seem like details, but it shows the mastery of the designer. For instance, the lums in Rayman are very well positioned and contribute to the pacing, while the gems in Black Forest Games (Bubsy: The Woolies Strike Back and Gianna Sisters: Twisted Dreams) can be an awful distracting mess.

Enough praises, are there any shortcomings? I would say that a few levels towards the middle are not as exciting as the rest, and I feel that the environmental story-telling was occasionally brilliant (the first dream sequence) but then it was a bit too thin. I would have loved to see more of that. Finally, the options menu is essentially non-existent and the controls cannot be changed. WASD and arrows are both supported, however, this might be an issue for foreign keyboards with ZQSD and the likes. 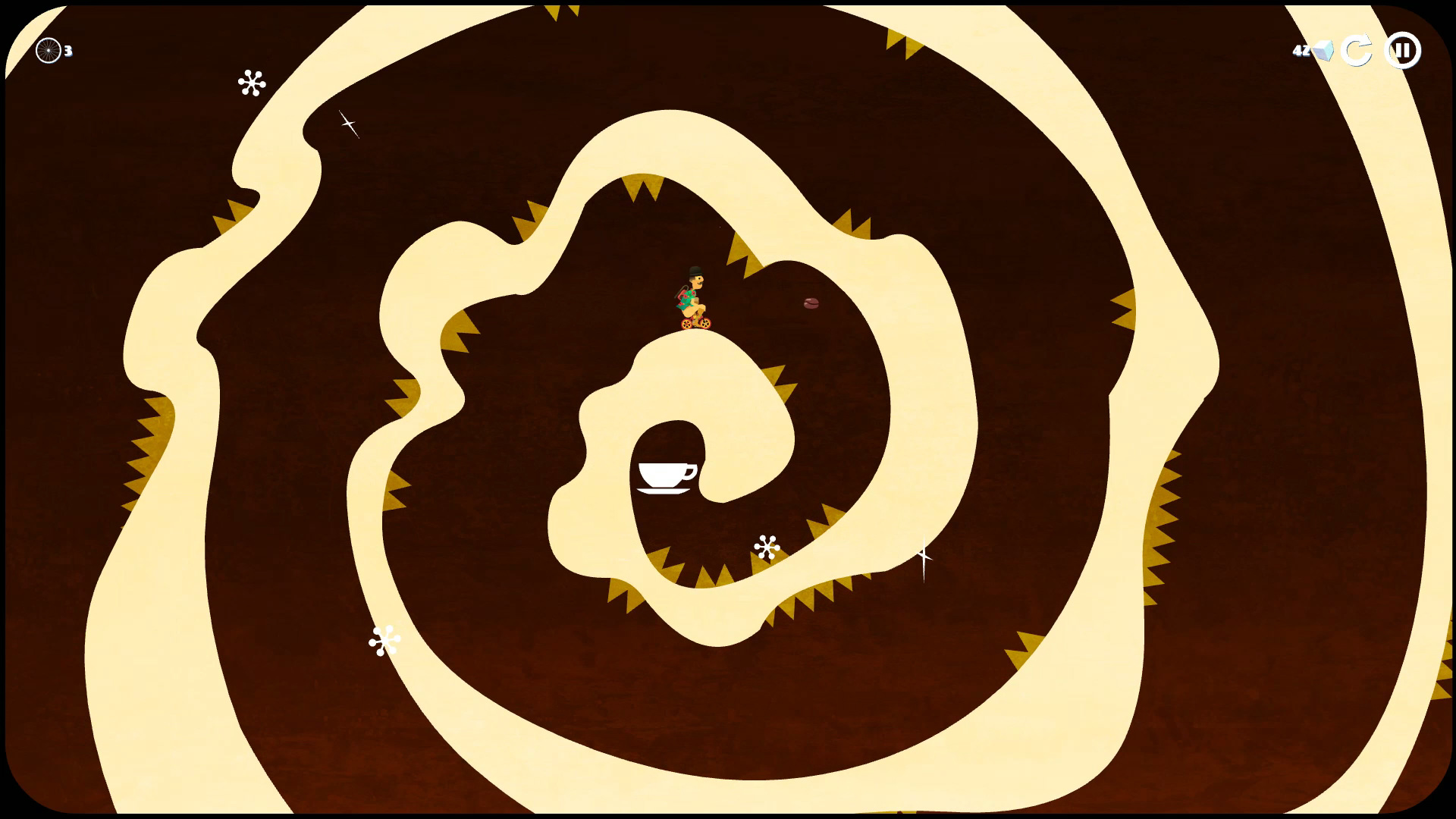 If you have read the rest of this review the conclusion practically writes itself: Icycle: On Thin Ice is a brilliant game. The platforming on wheels feels fresh while being tight and an absolute pleasure to control, while the art design is magnificent. And then these moving levels that morph as you go along? I’m completely charmed. As a veteran platformer player, the game constantly put a big smile on my face and that’s rare enough to be mentioned. Well done! The game is cheap, I strongly recommend it.