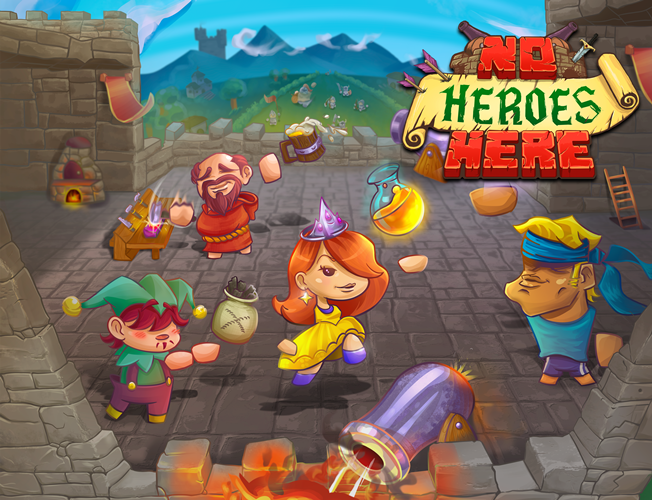 There is a castle to defend, and those cannons ain’t gonna man themselves. Bring your friends to help!

While it seems just a few years ago 4-player versus games were non-existent on PC, these days they are dime-a-dozen. What are much rarer are purely cooperative games, and we have recently seen Lovers in a Dangerous Spacetime and the masterpiece Overcooked shed new light on co-op gaming. Lovers in a Dangerous Spacetime is about manning different functions of a spaceship, while Overcooked asks the players to prepare meals by combining and cooking ingredients. No Heroes Here is exactly in between those games, with cannonballs to prepare according to a recipe and different cannons to manually activate by the players.

No Heroes in a Dangerous Castle

There are different waves of enemy soldiers to fend off, with archers and footmen taking different assault positions. To dispose of them, the cannons are positioned each according to a specific angle: for instance, the top right cannon will shoot at the first tile from the door (footmen) while the top left cannon has an angle to reach the second tile from the door (archers). Thus, the angles cannot be changed by the players who instead have to load and shoot the right cannon for the right job. To spice things up, new enemies appear to complicate matters, such as the knights and trolls who require several shots to take them down.

Preparing a cannon requires as much work as preparing a hamburger in Overcooked. Grab minerals and cook it in the furnace to make an Ingot, then polish it at the workstation to obtain a cannonball and insert it in a cannon. Just the cannonball alone won’t go far, so you will also need to harvest charcoal and refine it into gunpowder at the workstation. Lo and behold, you now have a cannon ready to shoot. Alternatively, you can harvest honey to make a sticky paste that will slow enemies down. If a whole army is stuck in position, finish them off with a high-value shot.

Well, that’s a best-case scenario because in reality doing all of this under constant pressure does not leave much time for tactics. The tension and difficulty of this game can be quite brutal, especially in some levels off the main path. There is one castle featuring flying furnaces that can only be used mid-jump, and a wall lined with cannons but no platforms. How do you use the cannons? By free-falling the tower and refilling/shooting mid-flight! The layout of the levels changes every time to spice things up, introducing conveyor belts or tricky platforms. 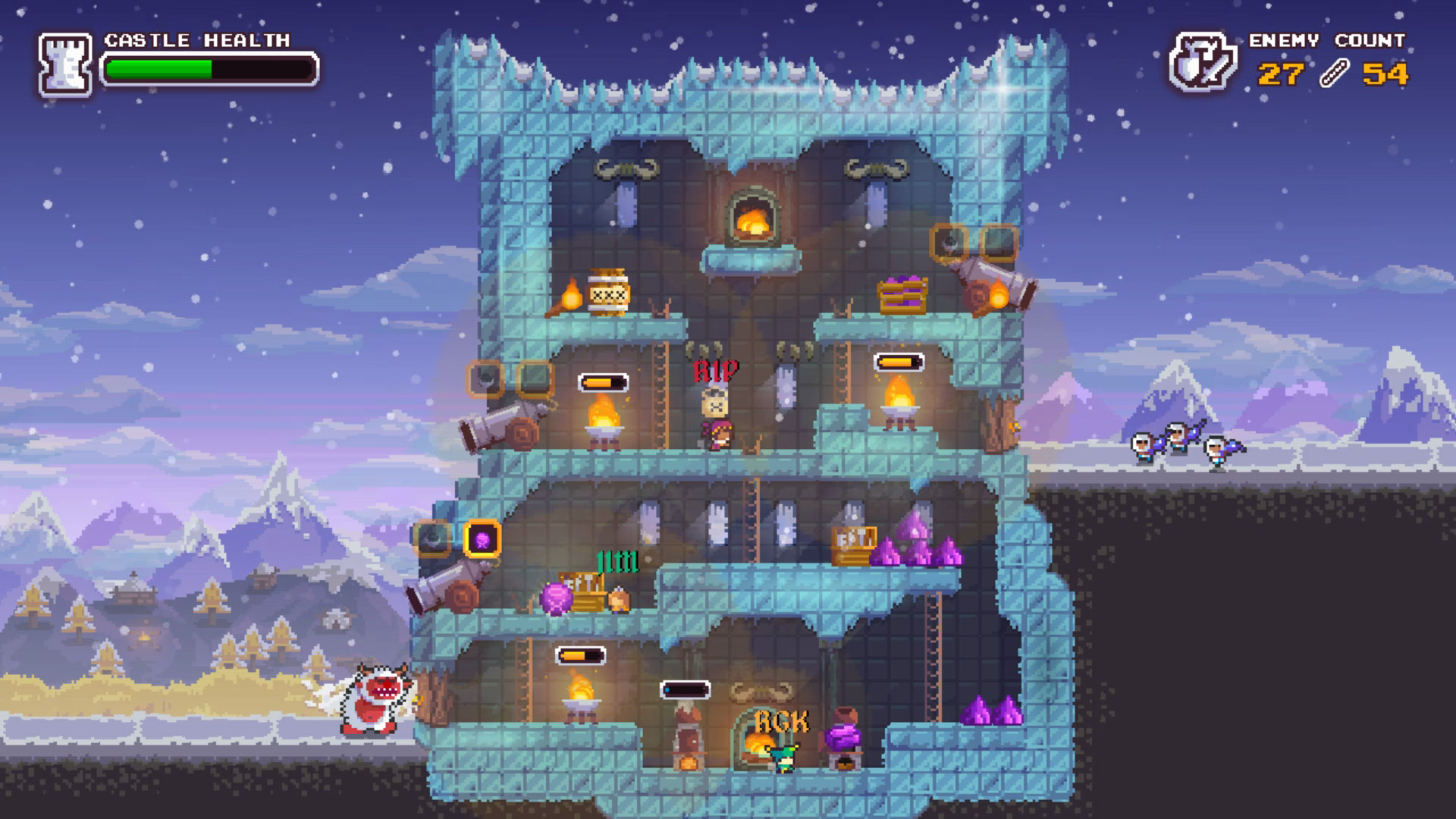 To discuss the co-op portion of the game, I will first have a look back at Overcooked. When tackling a new kitchen, my friends and I used to decide on a plan, an organization, and then set it into motion. Each player knew their task, slightly adjusted each time we tried the level so that we could optimise the cooking and delivery. We were constantly in communication about what we needed, or if someone needed to tend to a new dirty dish to clean. Lovers in a Dangerous Spacetime was much less interesting in terms of communication and organization. It was about pointing where danger was coming from and announcing who was going to use which station. Going back to No Heroes Here, we rarely achieved any level of meaningful communication. At best we vaguely organized ourselves at the start of a mission, but then the number of micro-actions and their pacing was way too fast for us to appreciate the big picture or to stick to one job. We vaguely had one area and did our best to accomplish the many tasks while constantly feeling overwhelmed and busy in a frenzy. There are always things to be done here and there and we always felt off schedule, it is absolutely not a well-oiled machine. The point I am trying to convey is that due to the difficulty of the game and the short micro-tasks to constantly accomplish here and there, everyone was too deep in their own bubble to communicate with the others much. This did not feel as rewarding or as socially fulfilling as Overcooked.

And yet, we still enjoyed our time with No Heroes Here. I suppose it has to do with our competitive mindsets set on overcoming the challenge and I guess it also helps that the world is cute and we liked being there together. Oh, I should also mention that we played online, because the game supports online as well as offline coop. There are many (many) levels to complete, thus the game has some good longevity even though it gradually feels repetitive. There are only so many castle layouts that you can stomach in a single session of the game! On a final note, the game can be played in single-player but don’t even think about it.

I’ve already mentioned it, but the enemies are super cute. I was very tempted to invite them in when I was not regretting the possibility to put my character in a cannonball and hurl myself through the level to switch from baking to dicing. 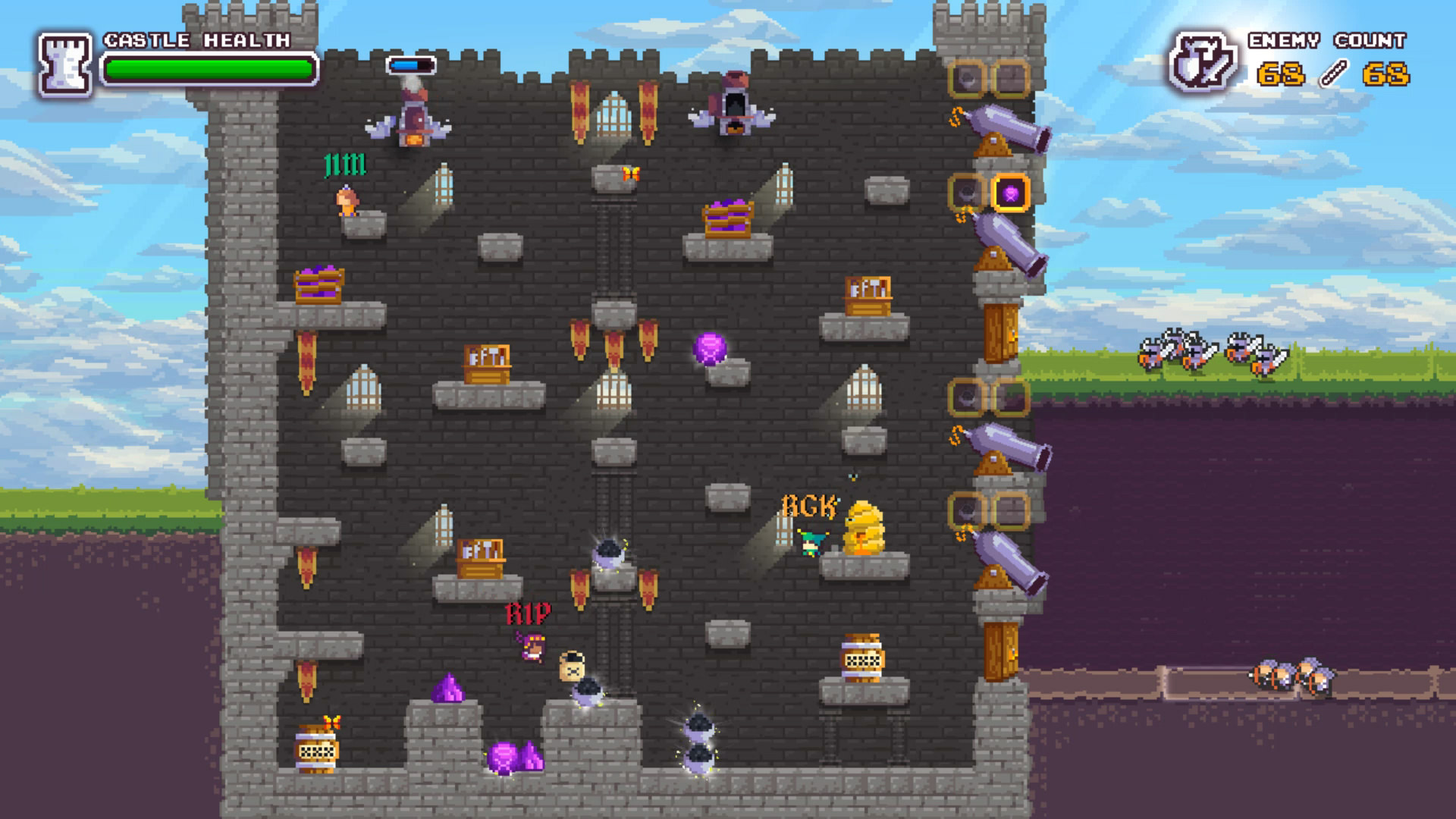 No Heroes Here is one of the few purely 4-player cooperative games, and while it did not particularly enchant me due to its demanding pace and repetitive nature, I would still count it as a decent game for a group of friends enjoying tough challenges and looking for a game with a long commitment. I cannot exactly recommend it while the brilliant Overcooked does the same thing but better, yet I would not dismiss it either because there is nothing fundamentally wrong with it.