REVIEW: The Evil Within 2

Survival horror at its finest, The Evil Within 2 is a journey through nightmarish landscapes, visions, and monstrosities that will captivate any fan of action, stealth, or open world survival horrors like few before it has ever done.Here, the player is given total freedom with an exceptionally balanced gameplay.

The Evil Within 2 is an action survival horror game with semi open-world exploration, weapon crafting and upgrading mechanics, diverse skill trees, and most importantly some of the most violent and horrific situations you can find in this year’s releases. The strongest point of this title is, without doubt, its atmosphere: the post-disaster, tense feeling provided by the environment our hero has to traverse is truly rendered with accuracy.  Mix this with hordes of bloodthirsty, creepy creatures that must be carefully engaged in battle along with a brilliant “risk to reward”  experience system and you have the recipe of one of the best survival horror games of the last few years.

The gameplay type of Evil Within 2 proposed here is really focused on exploration and stealth. While the stealth mechanic is in no way forced, you can go in guns blazing and shoot any enemy you see straight in the face, but picking off enemies one by one with stealth and the aid of Throwing Bottles to distract them really pays off with no ammo consumption. Resources are scarce, especially in the first half of the adventure, so be careful.  A silent approach is advisable to save the most for when you need it (ie. unavoidable fights or bosses), else you really can find yourself with nothing to shoot with and certain death. Stealth is cover-based and toggleable at any moment, the system works well and enemy perception will be influenced by many factors such as distance from them, speed at which you are moving, surface your steps are walked on, and light you can be projecting, and obviously any sudden sound source.

The other big part of the gameplay is exploration. The semi-open world structure means that there are some rather large areas you can freely explore, and these are filled with secret stashes of supplies, secondary missions, resources, upgrades and so on, but also dangerous enemies. The risk-reward concept is brilliantly rendered as the more enemies you take down, the more experience you get, and also access to more resources they may be obstructing access to. Using guns is easier, but consumes ammo, while stealth requires a methodical and slow approach. In the end, is up to each player to decide how to act, the game gives total freedom in this part for except some mandatory stealth sections. In Nightmare difficulty, stealth is outright mandatory unless you want to face bosses with your knife, which is impossible. 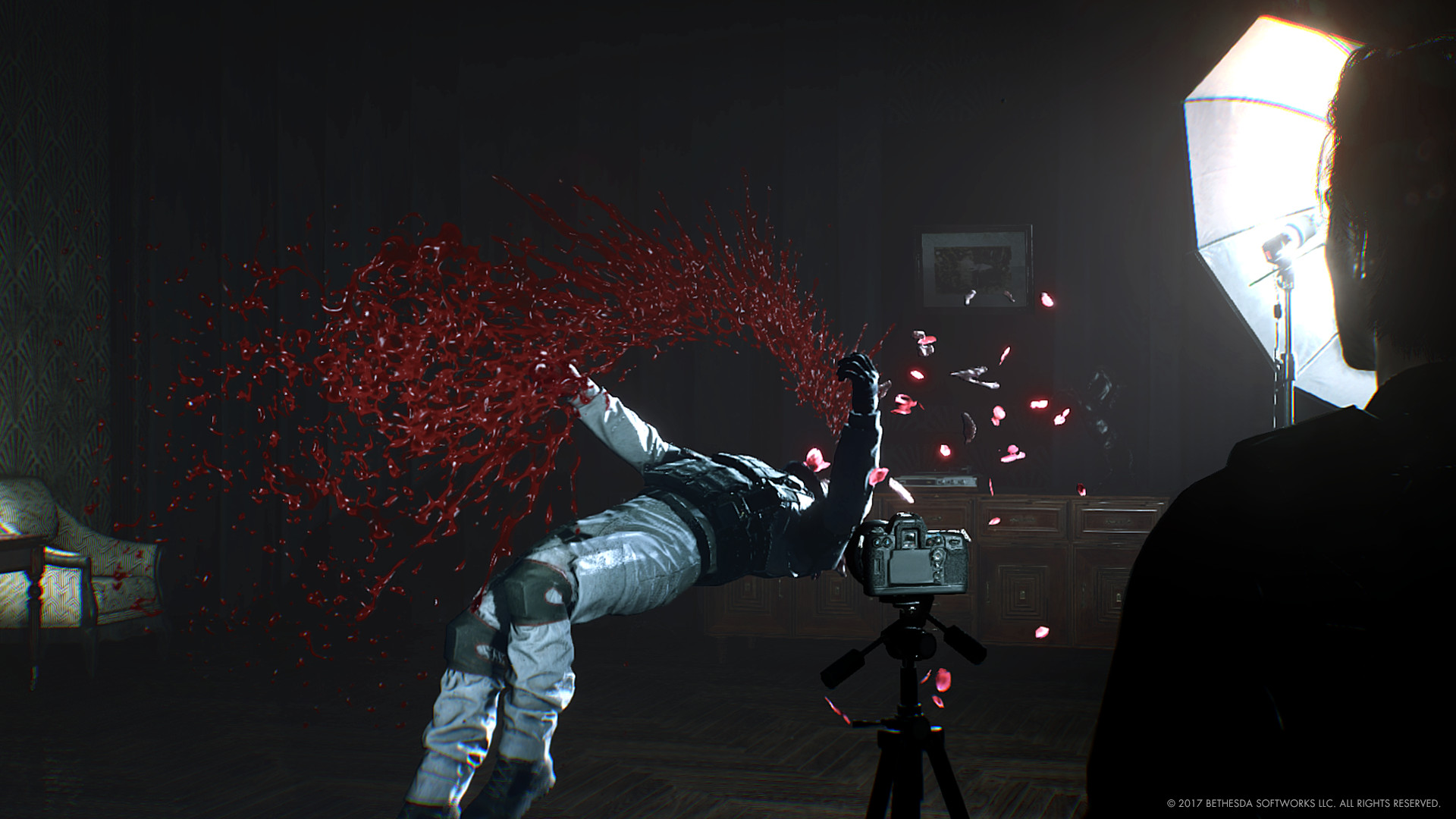 Some new generation mechanics are also introduced to keep the gameplay fresh, such as Crafting and Perks. In different places, you will find Workbenches with which you can craft ammo types or repair broken guns with spare parts. Guns do not have durability but some are just broken and often repairing them leads to accessing a brand new weapon in the inventory. Ammo is expensive to make, so are consumables like medkits and syringes. When you find a Mirror also you can go to Sebastian’s office where a very kind but rather creepy nurse will offer him upgrades at a cost of some Green Gel, which is made of experience points, rarely found and mostly obtained by dead enemies. Also, there is a big row of lockers, each can be opened with a Golden Key you find in some statues lying around the map, often well hidden, that when broke give one key. These lockers contain resources of all types in good quantities, so keep an eye out.

Like any good survival horror, minigames are present. There will be some puzzles to solve around and most importantly the Shooting Range where , with a pistol and unlimited ammo, you will have to shoot targets in one mode, and some bejeweled-style blocks in the other one to score combos and earn points. This is a nice addition and a tribute to Resident Evil 4‘s Shooting Range no doubt, this comes with a set of rewards.  The more points you get, the more resources you receive as a payoff.

I really have no major issues with this system, Tango Gameworks really nailed the gameplay keeping it true to survival horror but with just enough new stuff that it feels modern and fresh. 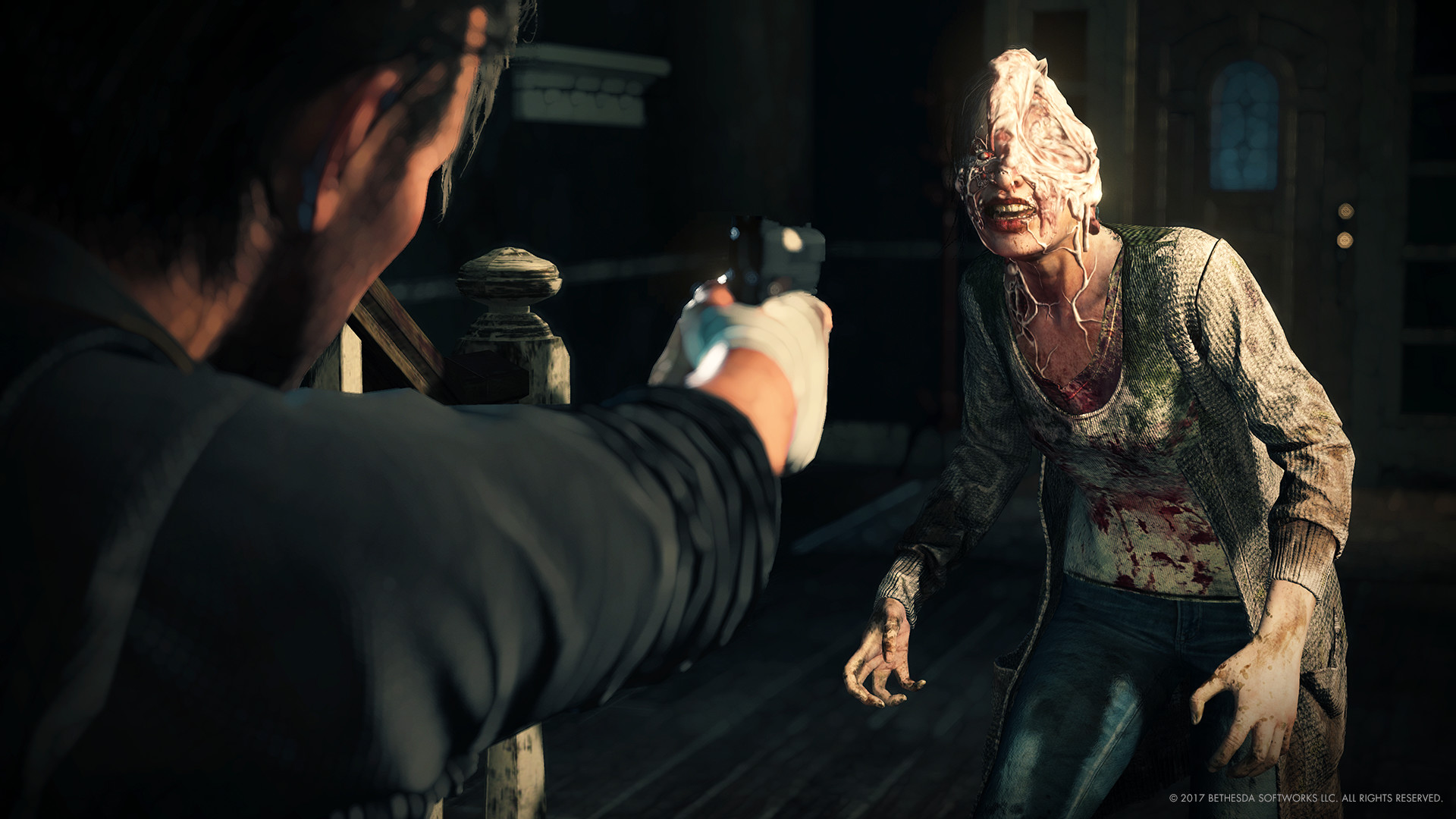 There are mainly two types of combat: melee and ranged. The first one is only an option in desperate situations as your knife deals very low damage even with melee upgrades.  However, it is also feasible when you have an Axe, a one-time melee consumable often found around and on some enemies. The Axe enables you to deliver a powerful melee blow and breaks only when connecting to an enemy.  This is much more powerful and can even 1-shot mid-tier enemies if upgrades are in place, otherwise it instakills low-tier normal ones.

Ranged combat is in third-person and features an aiming reticule or weapon specific targeting systems. It’s rather hard to aim for enemy weak spots when they are moving and charging you, so it is not as easy as you think. You don’t just kite enemies around and shoot because it won’t really work. Weapons are not exceedingly powerful and ammo is rare. I should mention that auto aim on the Nightmare setting is disabled, so you really will have a hard time hitting heads with a gamepad on the highest difficulty, using a mouse and keyboard is much more accurate at the expense of the other controls viability. This reminds me of the good old days of RE4 on PS2, where aiming with that joystick was really tough, it’s pretty much the same only there is 90% less ammo around.

Let’s talk bosses, well they generally are very hard, high damage enemies that will nearly deplete your ammo and health supplies with draining fights. Often, there are ways to inflict much more damage to them in each encounter, it will be up to you to be smart and use weapons correctly, or not. 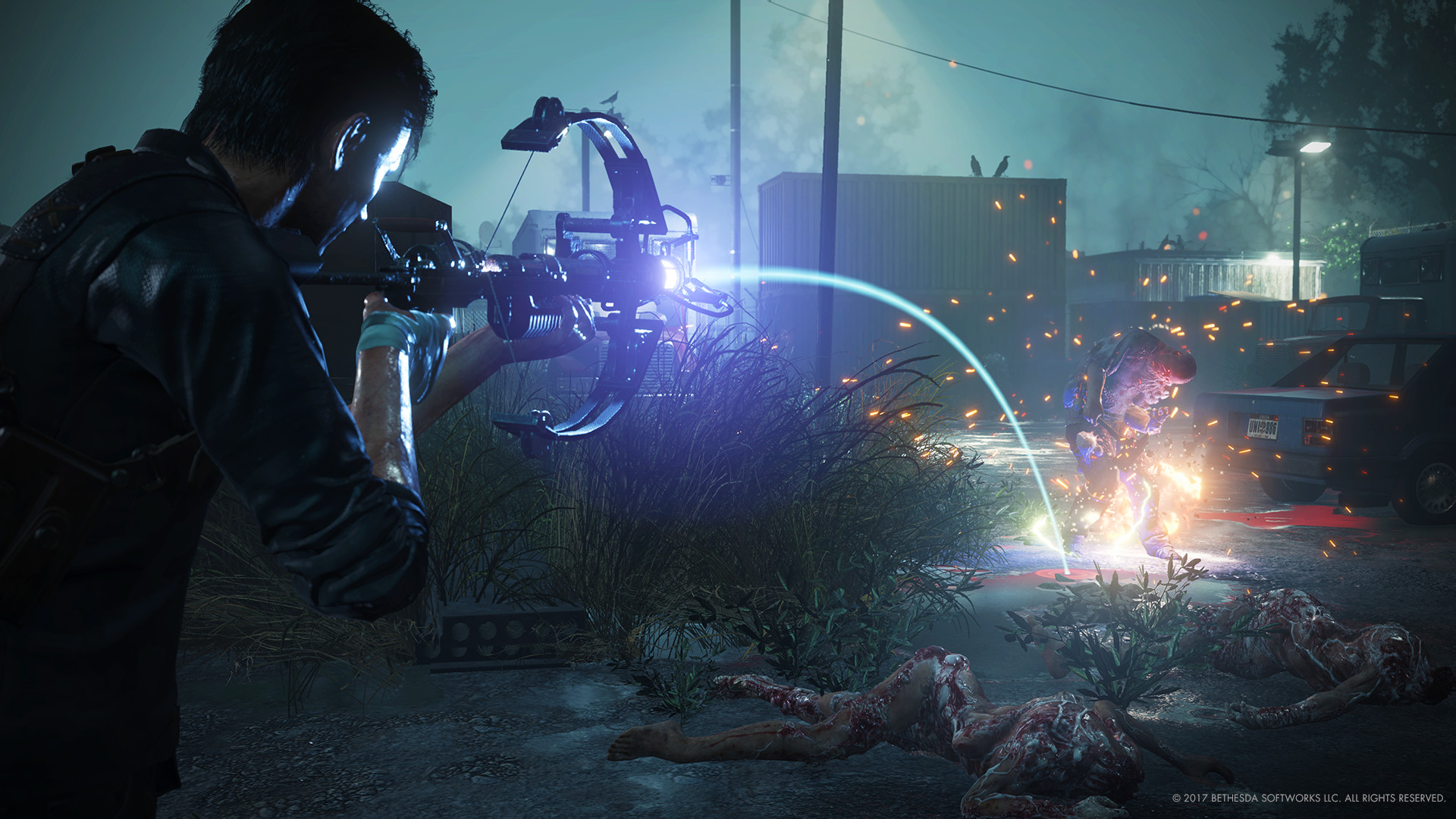 If you intend to find all the resources of each map, slay all enemies, find the hidden keys, do all side quests, this game has a lot to offer. Starting from the assumption that the game pace is slow, which depends if you decide to do a stealth approach, the content is there and there is more than enough for this genre. If I have to do an estimate for longevity play time, I’d say 25 hours is a good one, it may vary on player skill and collectible/secret finding. Overall, the diversity of enemies, situations, and environments is quite good, and as for the content, the game is solid.

I found no particular imbalances in combat or resource allocation, well maybe the Explosive Dart on the crossbow is a bit OP since it can blast away entire hordes of enemies in one shot, but that’s a minor thing, generally the game is well balanced and there will hardly be a situation making you say “damn that is so unbalanced”, provided you go prepared.

This depends a lot on what difficulty you choose. The difficulty in this game impacts how many resources you find, how tough and damaging enemies are and probably how many of them are around. So changing the difficulty changes gameplay a lot because on higher settings a different approach and pacing are needed to survive. On average difficulty… it has medium challenge, which goes to medium-high on hardest. 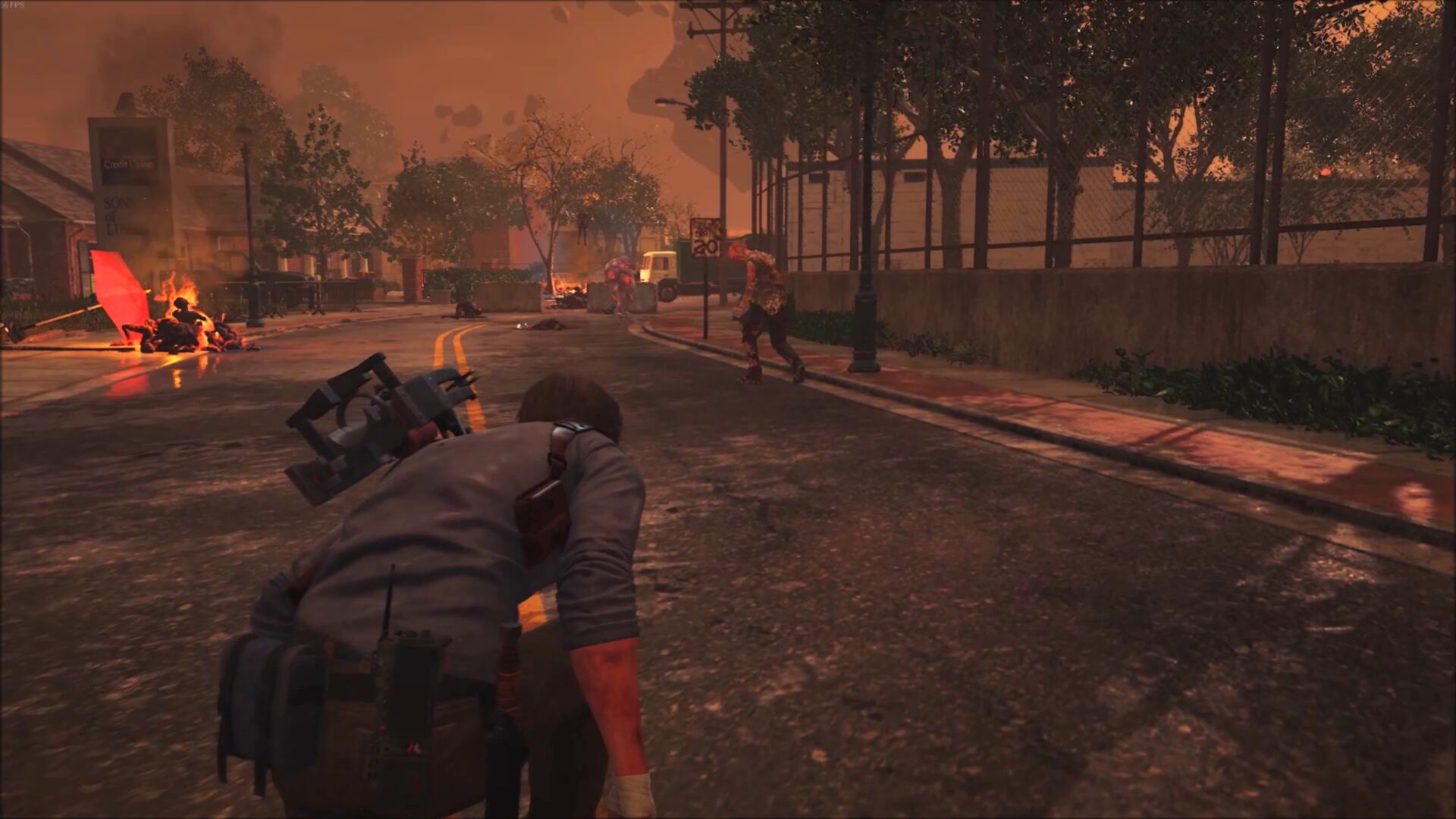 The graphics are derived from the STEM engine from DOOM (2017, with a bit of modification. I did not find the graphics in this game to be very impressive.  For being a triple-A title with a large budget and all, some textures looked kinda low in quality. The effects and particles are decent, but not that great either. Tthe lighting system is good enough, and the meshes and models are well done. Generally, the most lacking attribute here are the textures. Overall, a solid graphics makeup nonetheless.

The sound consists of a staple of survival horror, Tango Gameworks knew it and made a great effort in doing audio worthy of a true horror movie. The chilling sounds of enemies will make your skin crawl at every corner, especially at the beginning part of the game which is set at night in a very spooky abandoned city. Also, the voice acting is really well done with believable expressions from characters. All this provides an incredible amount of atmospheric immersion.

The game is quite disappointing on this side. With this level of graphics, we could run it at 2560×1440 with some setting tweakings, at a mostly stable 60 FPS… on a Nvidia 1080 and an 17-4820K, 16Gb RAM. There are sometimes frame drops in certain sections which are tied to performance issues and not hardware issues. I did expect to run it all maxed out on 2K resolution but in the end some adjustments were necessary, even if the requirements of the recommended levels are far lower than the ones of our test machine. For the grade of visuals it delivers, performance is sufficient but just so, more optimization is needed to run well on lower end machines. 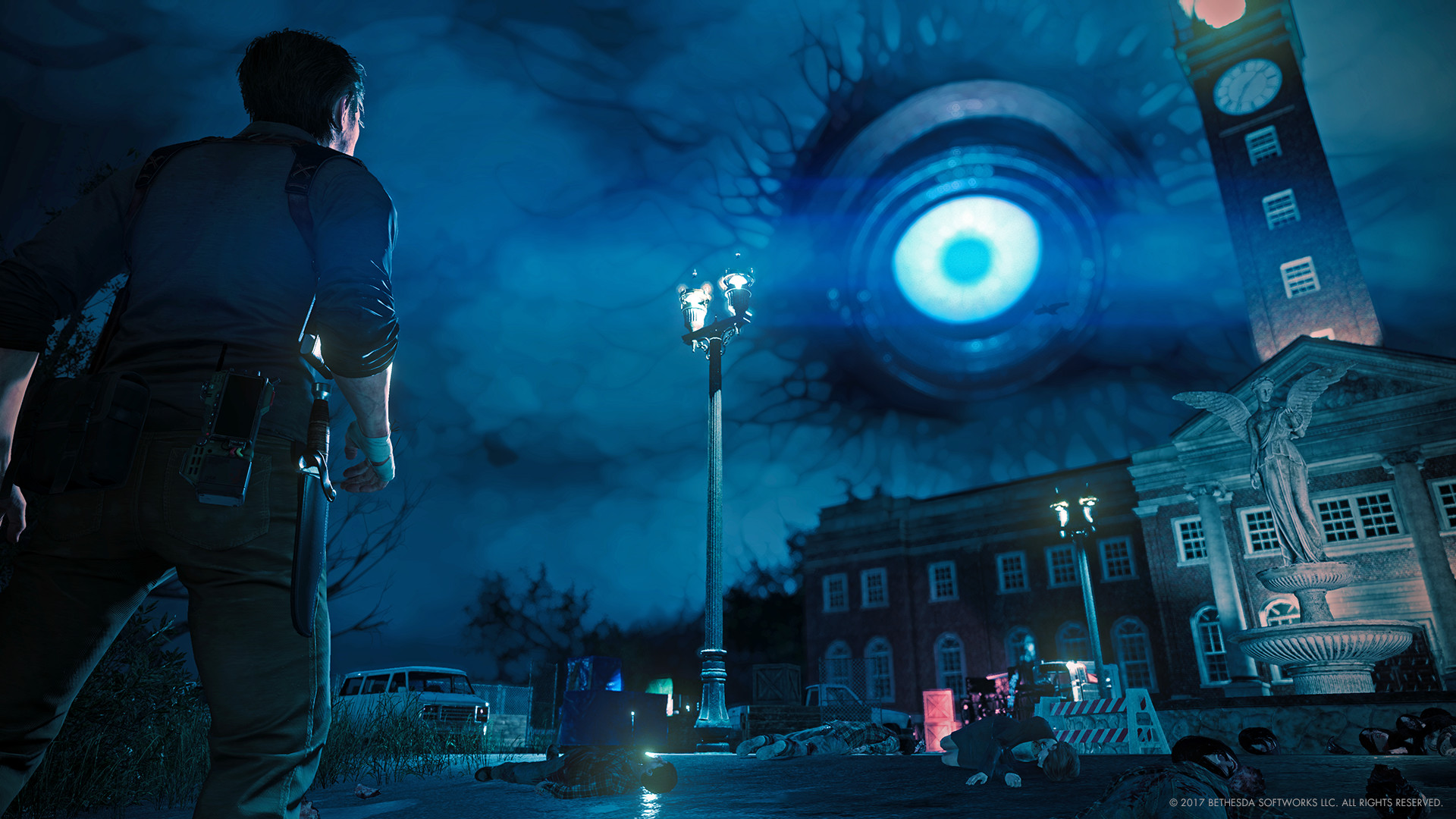 No issues to report.

The AI of enemies is, in truth, basic. They follow patterns and are distracted from sounds, chase you if you get in their vision, they do not employ special tactics or maneuvers, just pathfinding. Then again they are brainless, bloodlusted monsters.  Some later game enemis have more advanced AI and will even investigate sources of disturbance in the area, but most enemies are twisted creatures guided only by blood, and that is fine as far as the game is concerned.

The UI and menus are well done, there are several quality of life additional options such as Hold or Toggle on crouch, sprint and so on, key rebinding. Overall, very good.

In some rare cases, if your character changes a weapon while in some tunnel and crouched, there is a chance you will go through the floor and under the map, forcing to load a recent save. Other than that, i did not notice any other major bug or issue to report. 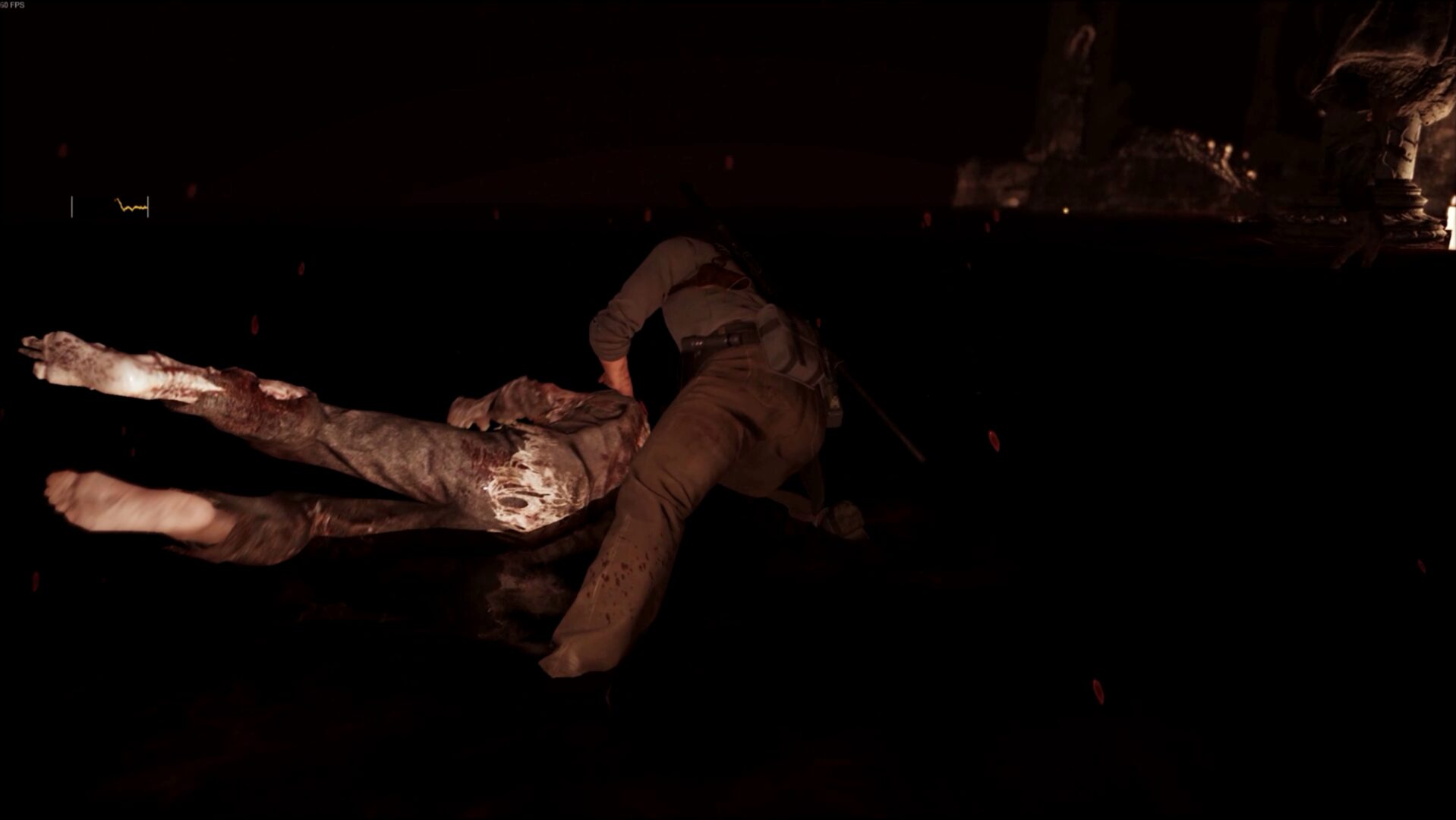 The Evil Within 2 is how survival horror should be done. It combines old and new gameplay elements with success, has a great atmosphere to it, and is really satisfying and fun to overcome the difficulties it presents.  Here, the player is given total freedom with an exceptionally balanced gameplay.  Players can even just explore the world and gather resources while not being spotted.   This title really shines as one of the top survival horror games in many recent years.

For me, the game is on the edge of an Autosave rating.  It falls short because the enemy AI in stealth can be a bit too dumb and also because it has performance issues. To be an Autosave it really needs to be a sort of revolution for the genre gameplay-wise, and apart from crafting and the semi-open world, which has already been seen in other titles, it does not make that type of statement.  So, I give it a Save rating.  I’d say Save + if I could. 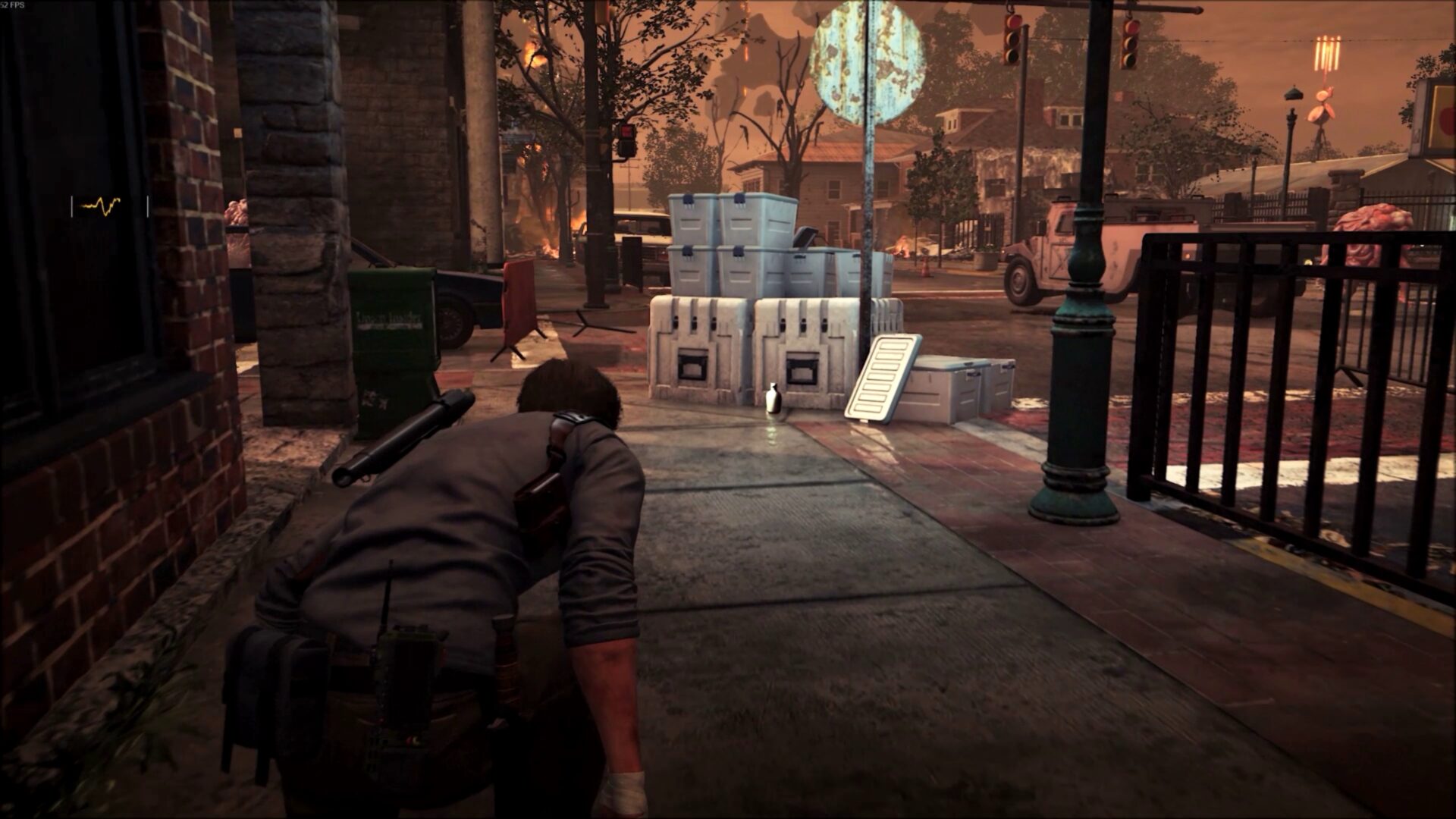