Inspired by a great series, Fall of Light fails to distinguish itself on its own.

When I first saw Fall of Light, the first thing that popped into my head was the Dark Souls series, and I’m sure a lot of people experienced the same thing. From the dark and grim setting that is portrayed throughout the game, especially during the introductory sequence, to the messages that are carved on the ground, to the way your character opens gates, the fact that you pray at shrines in order to activate a checkpoint (which also resurrects enemies), and just, overall, how the combat works, anyone that’s familiar with the Souls series can clearly see that this game was heavily inspired by it. This is even true in regards to how the game controls, as it’s pretty much unplayable with a keyboard and mouse.

The game takes place in a world in which darkness has triumphed over light, and which is now infested by all sorts of creatures. You play as Nyx, an old warrior, who’s escorting his daughter, Aether, across this dying world, in the search for the last place where the light still shines. While you play as Nyx, you’re still indirectly controlling Aether, as she follows you around when you tell her to, and you can even grab her hand and lead her. This is not only done in order to have story cohesion, but it also serves a purpose in terms of gameplay. Aether is an Indigo child, which means she emits light, thus illuminating your way throughout the various dark levels, but she also grants you increased strength if she’s nearby, which you can see by different particle effects on your weapons. 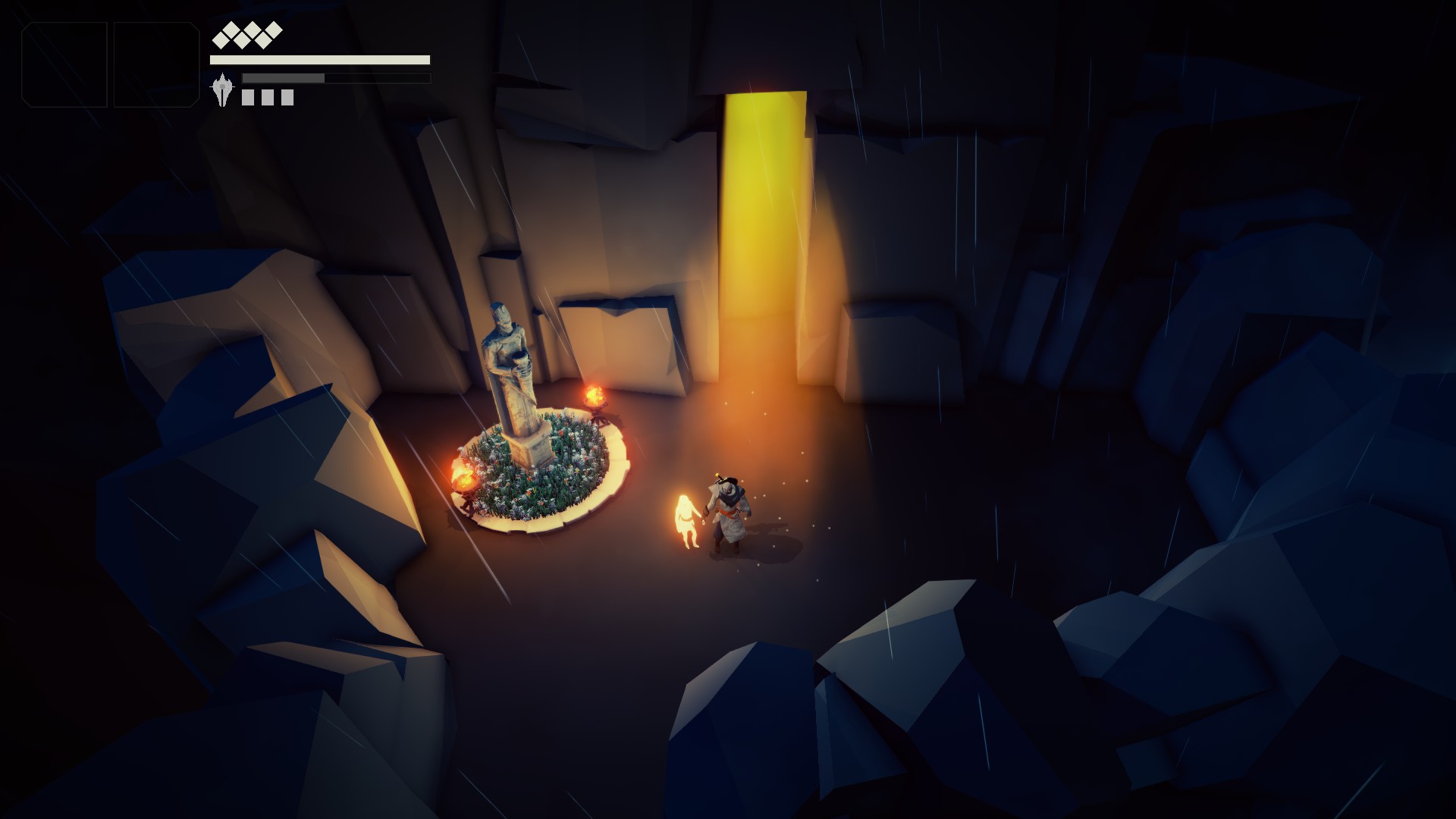 The game describes itself as a “story-driven dungeon crawler” but, while there are a few specific story elements in the game, you’ll spend most of your time in combat or walking around than really doing anything else. In essence, Fall of Light features most of what you’d expect from a game like this, things like a level up system, different weapon types that change your attacks and the way you move, an open world for you to explore, amongst a few others. However, while in theory it sounds coherent, in practice the story is much different.

Fairly early in the game, you’ll earn both the ability to heal yourself and to transform into a creature of the shadows for a short amount of time, which grants you infinite stamina for that time period. At that very same time, you’ll also be introduced to the game’s leveling system, which relies on killing enemies to get their souls, and once you’ve gathered enough souls, you’ll be able to increase your strength and maximum health when activating a shrine. However, while this sounds like a reasonable approach to a leveling system, things start to fall apart when you die and realize that you can’t recover the souls you previously had. This introduces some sort of grinding because it gets progressively harder to level up, which could’ve been easily solved by just letting you recover your souls after death. 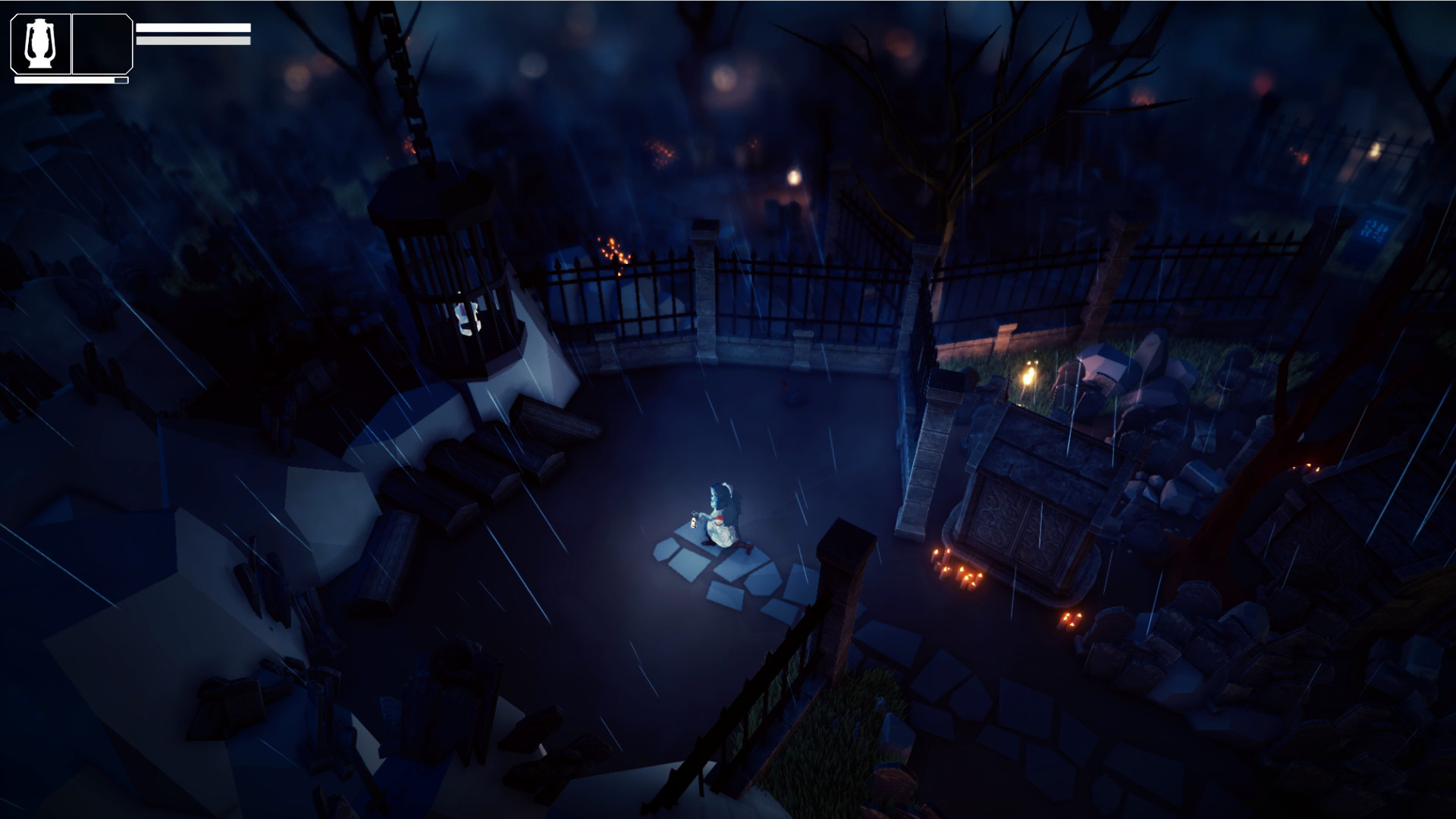 Now, the game has these moments in which you’re separated from Aether after she’s captured. When this happens, you have to track her down and free her. If during the time you’re trying to rescue her you die, you’ll respawn back at the last checkpoint that you’ve activated, since you can’t activate shrines without her. This only intensifies what I described above, the fact that dying means the loss of souls which you can’t recover, and if you find yourself without Aether, defeating enemies is inherently harder because you’re not as strong.

Lack of fast travel between shrines is also a thing, and this makes the game quite more tedious than it should be. Sometimes you just need to go to another place you’ve previously been in and having to walk all the way over there, while facing enemies and risking Aether being kidnapped is kind of a lot to ask for, mainly because if she does get kidnapped, there’s even more backtracking to be done. 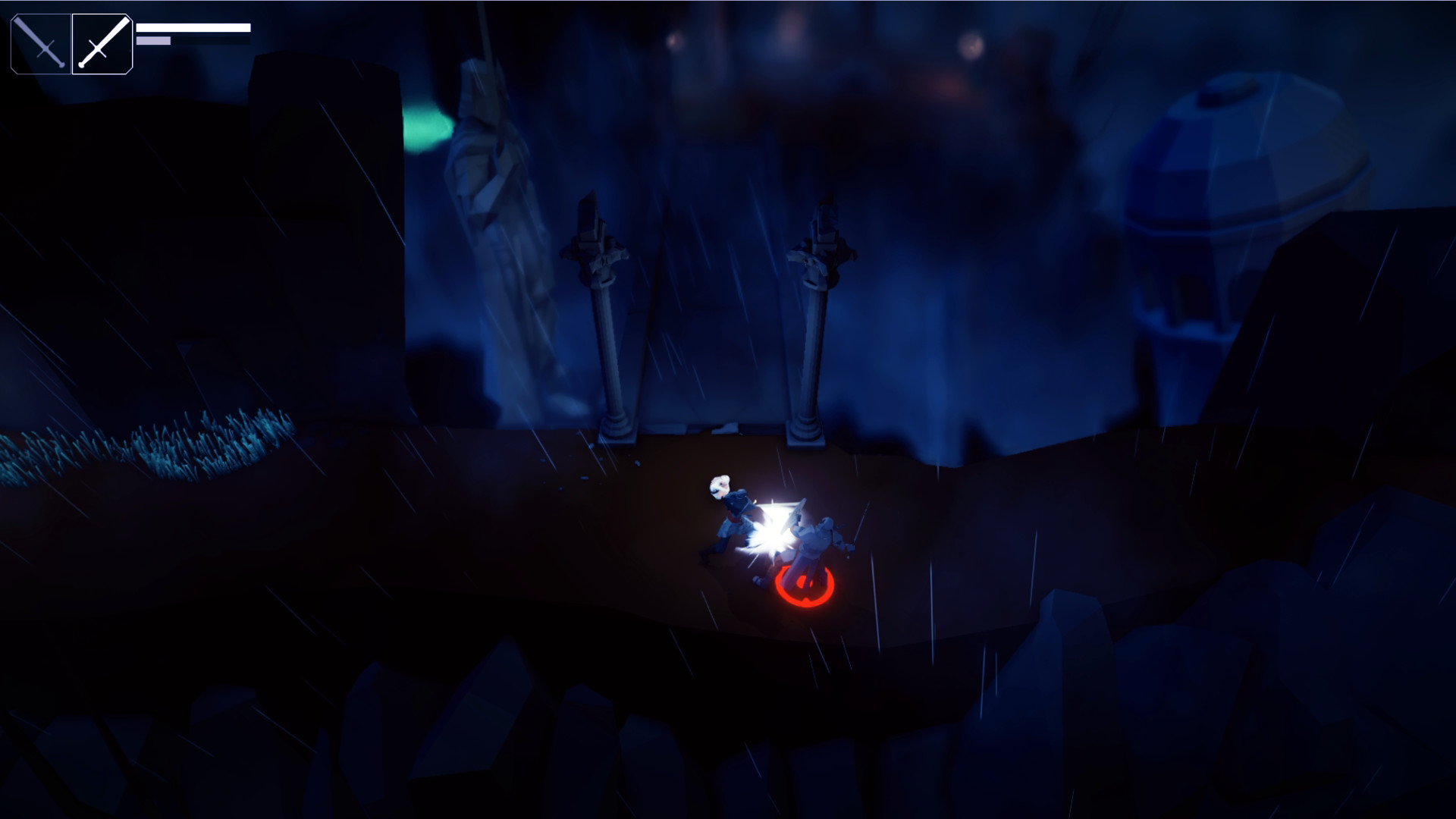 Quite honestly, for a game that claims to be a dungeon crawler, the combat is somewhat lackluster, mostly because there’s not much variety to it besides being able to use a normal and a heavy attack with different weapons, and also because, most of the times, the AI seems to wait for you to attack before making a move, thus giving you a huge advantage, but other times it attacks earlier than it usually does. The enemy AI is very inconsistent. The thing is, that’s not the only issue I have with the combat, as early on the game, it was getting into it, but the more I played the more I realized it was just more of the same, which in this case wasn’t that great. There are plenty of different enemy types have their own attack speed, which, in theory, would mean that you’d need to learn the the different timings between attacks that each of them have, but like I’ve said, their actions are inconsistent.

There is however a rather decent amount of weapons to choose from, from daggers, longswords, shields, spears, halberds and crossbows, and each of them have a unique “ability”. These abilities rely on a specific percentage chance to be triggered, chance which can be increased by being next to Aether, and they go from being able to stun enemies, make them bleed, or knocking them down. This, along with the arsenal at your disposal, adds quite a bit to combat variety, and I’m sure there’s enough weapons to please whatever type of player that someone happens to be. Still, at times, the combat system feels all over the place, the lock-on system doesn’t always work and while sometimes your attacks feel responsive and fluid, other times they just feel delayed and it seems that the enemy suddenly decided to start attacking you faster than it usually does. In other games you could perhaps counter enemy attacks but that’s not the case here, mostly because there are no actual counter-attacks and because there’s a very strict stamina system which you can’t improve. 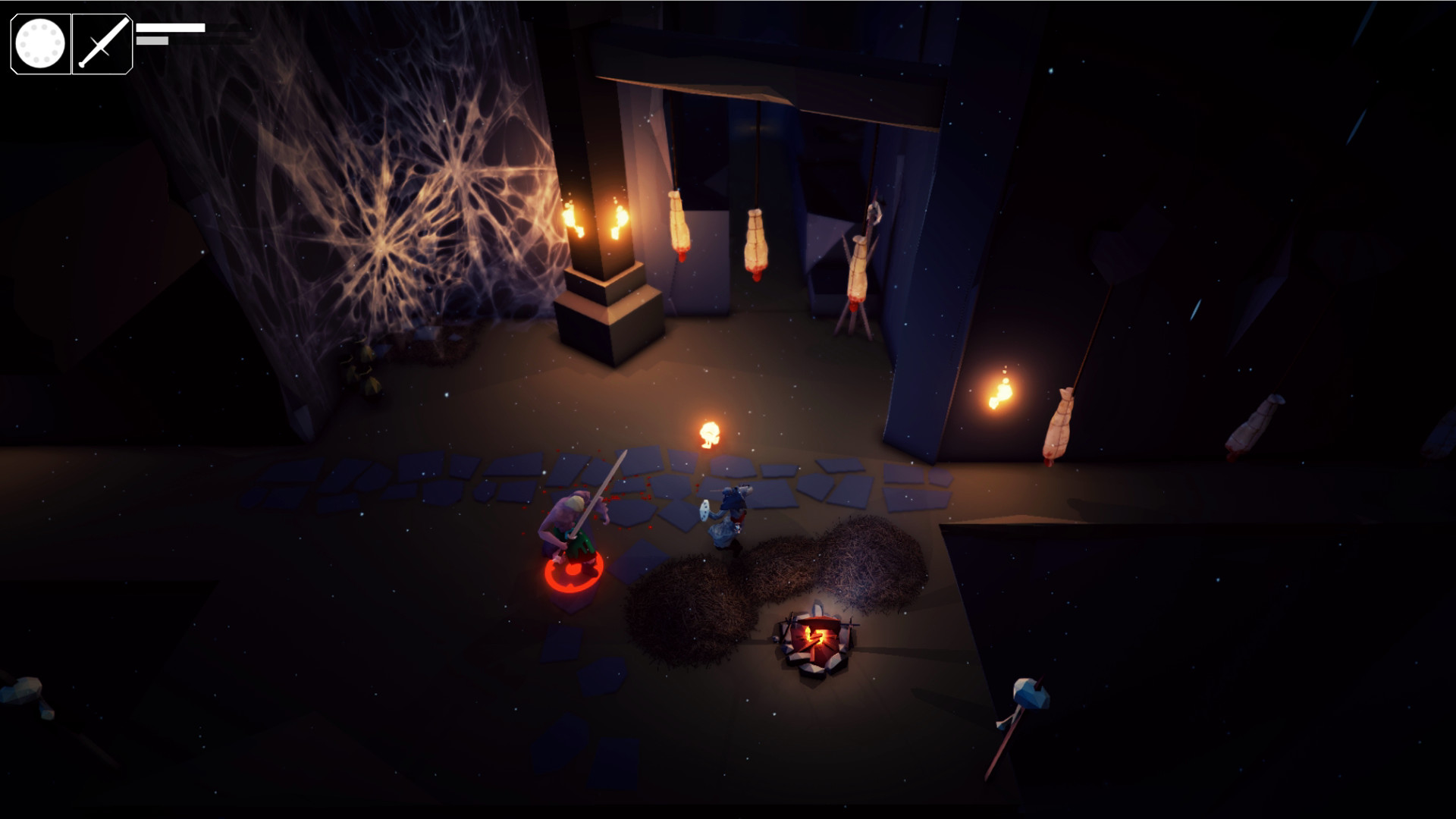 Another thing related to the combat that is worth mentioning is how easy it is to cheese some enemies. The way you switch weapons in Fall of Light is by simply opening the inventory screen, which pauses the game and then switch to another weapon. In practice this means that if you can, for instance, use a long range weapon to strike enemies first, and then switch to a close range weapon when they’re right next to you without any actual penalty. I think it would’ve been much more interesting to have the player switch weapons on the go, instead of being able to pause the game in order to do so.

Visually, the game features a low poly aesthetic, that fits quite nicely with its dark theme, alongside some good looking lighting and particle effects, which, despite the lack of colour in the sceneries, makes the ambiance of the game pleasing to the eye. With that said, the game is played from a fixed isometric view, which is one of the game’s biggest flaws. While you can clearly see enemies coming at you from the sides and the top of the screen, despite the horrendous depth of field post-processing effect, you can’t, at all, see enemies coming from the bottom, until they’re too close to you, and sometimes this creates some rather frustrating situations. The fact that you can’t rotate your camera also means that sometimes you might take a false step and fall down the level and die, just because you couldn’t see where your character was going because something in the environment was in the way. 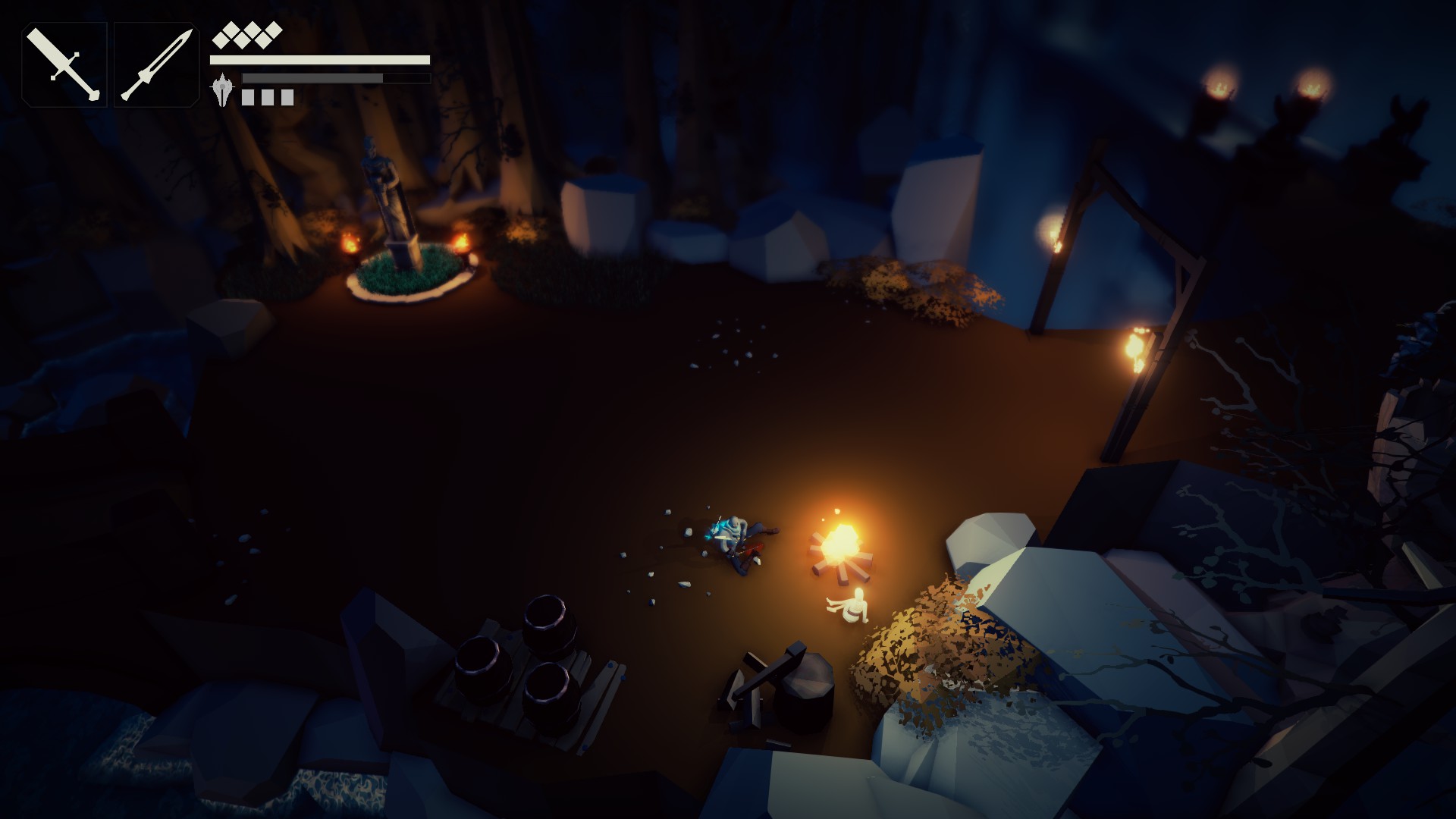 As far as level design goes, it’s nothing really outstanding, it gets the job done. Still, you’ll sometimes come across some traps that do provide some extra challenge, and there are also secondary areas that you can visit which are bound to have some sort of item or upgrade that you can use to your advantage.

Despite my criticisms, there’s a part of me that can’t help but appreciate the ambience and the atmosphere that the game conveys. Even though the game would probably be better off without voice acting, the ambient sounds are nice enough but I do wish there was more music in it. Nonetheless, this isn’t a game made for those looking for a hardcore combat experience, or an exquisite dungeon crawler, which is what the game claims to be, and for that I can’t really recommend it at its current price. It’s neither a good game nor a bad one, it simply is ok.