JCB Pioneer: Mars lets you play the part of an early Mars colonist working for the now-interplanetary JCB company.

JCB Pioneer: Mars (JCBPM for short) is the debut title from developer, Atomicom, working closely with one of the world’s largest construction machinery manufacturers, JCB.

In JCBPM, you play an early Mars colonist whose descent to the planet goes awry. You wake up next to your escape pod and a helpful AI (?) introduces you to your suit’s functions and directs you to nearby salvation: an electric vehicle from JCB, the X-18. Not only does the X-18 move pretty quickly compared to your plodding steps, it also protects you from the dangerous weather of Mars and, importantly, has its own Oxygen supply.

After recovering the X-18 and navigating a few more hazards you soon find yourself at a deserted and not-quite-operational habitation unit (‘hab’), presumably the home of an even earlier colonist. From there the AI leads you through basic missions to restore the hab to operation, making you self-sufficient for water, food, and all-important Oxygen.

You’re then introduced to the trade interface, where you can take on new missions to extend your base to further support the colonization efforts. In the future, JCB seems to have expanded into interplanetary colonization. As for these missions and other tasks, you’re awarded JCB credits and research points which you can spend on researching and upgrading your suit, vehicle, and buildings, as well as buying other vehicles from JCB.

JCBPM‘s graphics are full 3D from a first- or third-person perspective.

The landscape looks suitably Mars-like from my point of view, though I’m no expert. There are reddish-brown rocks and lots of dust, weird rocky formations, and jagged hills. It’s desolate and unfriendly looking, as it should be. Vehicle and building models look suitably rugged and realistically futuristic — no crazy pulsing plasma fields and black-hole generators — though the giant holographic-style 3D printers and the nano-rifle are perhaps a bit of a stretch. There’s a good range of buildings and once they are built, they become part of the world with power conduits making cool little speed bumps for your vehicles and larger buildings allowing you to climb external ladders.

There’s a model for your character when playing in third-person view: a realistic-looking, if somewhat boring, EVA suit. Animations seem a bit wonky and I didn’t like the fixed camera position, though, so I played in first-person instead. The AI has a very pretty portrait when she’s speaking to you. 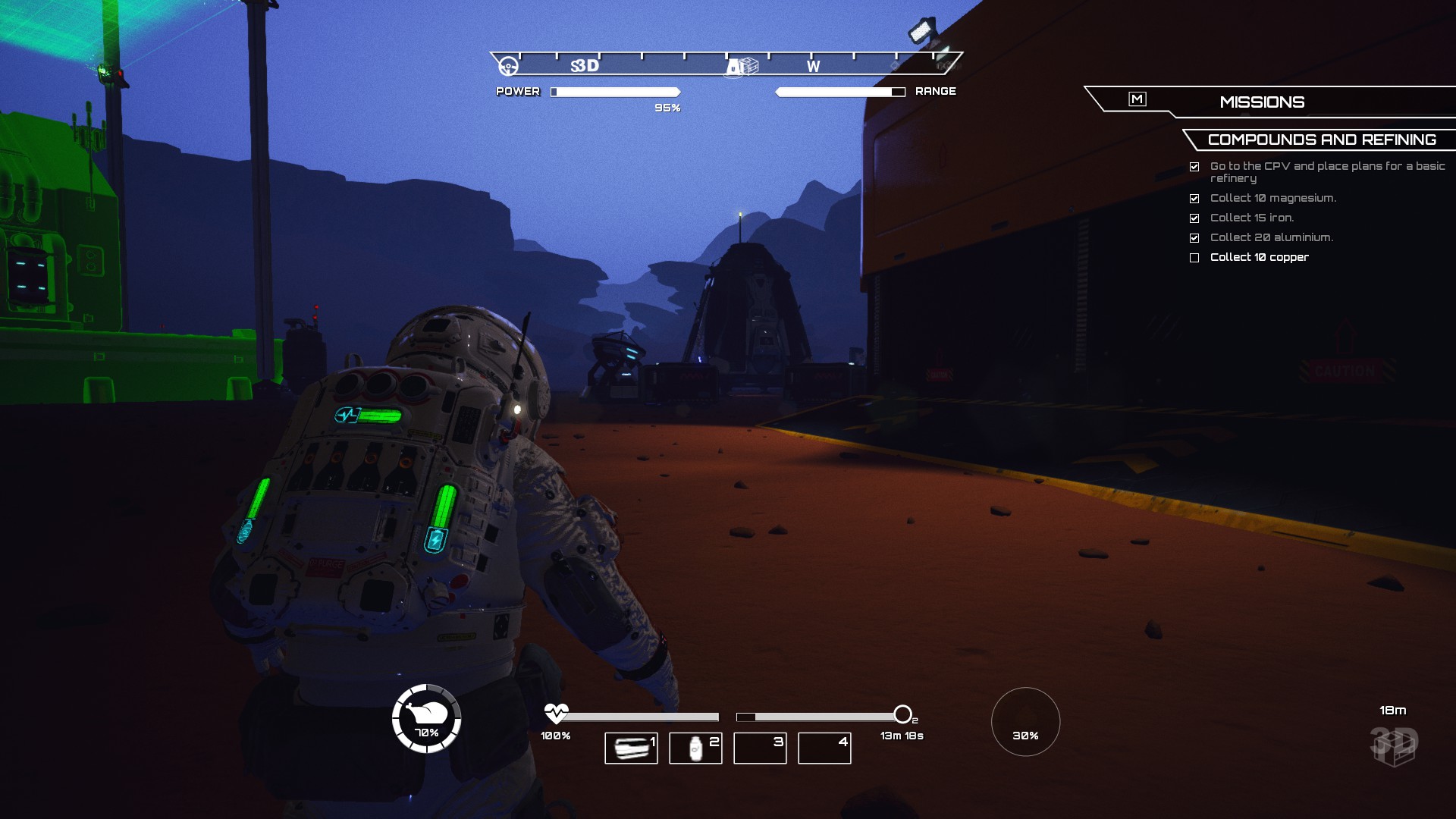 Special effects are impressive, with dust clouds, meteor strikes, and other cool weather and hazard effects. Oxygen venting from damaged buildings looks great, too. The lava looks terrible compared to everything else, though, and there are very rigid boundaries around some of the hazards; take one step outside the boundary and meteors disappear, for example. And for some reason, we never see the sun or either of the moons. 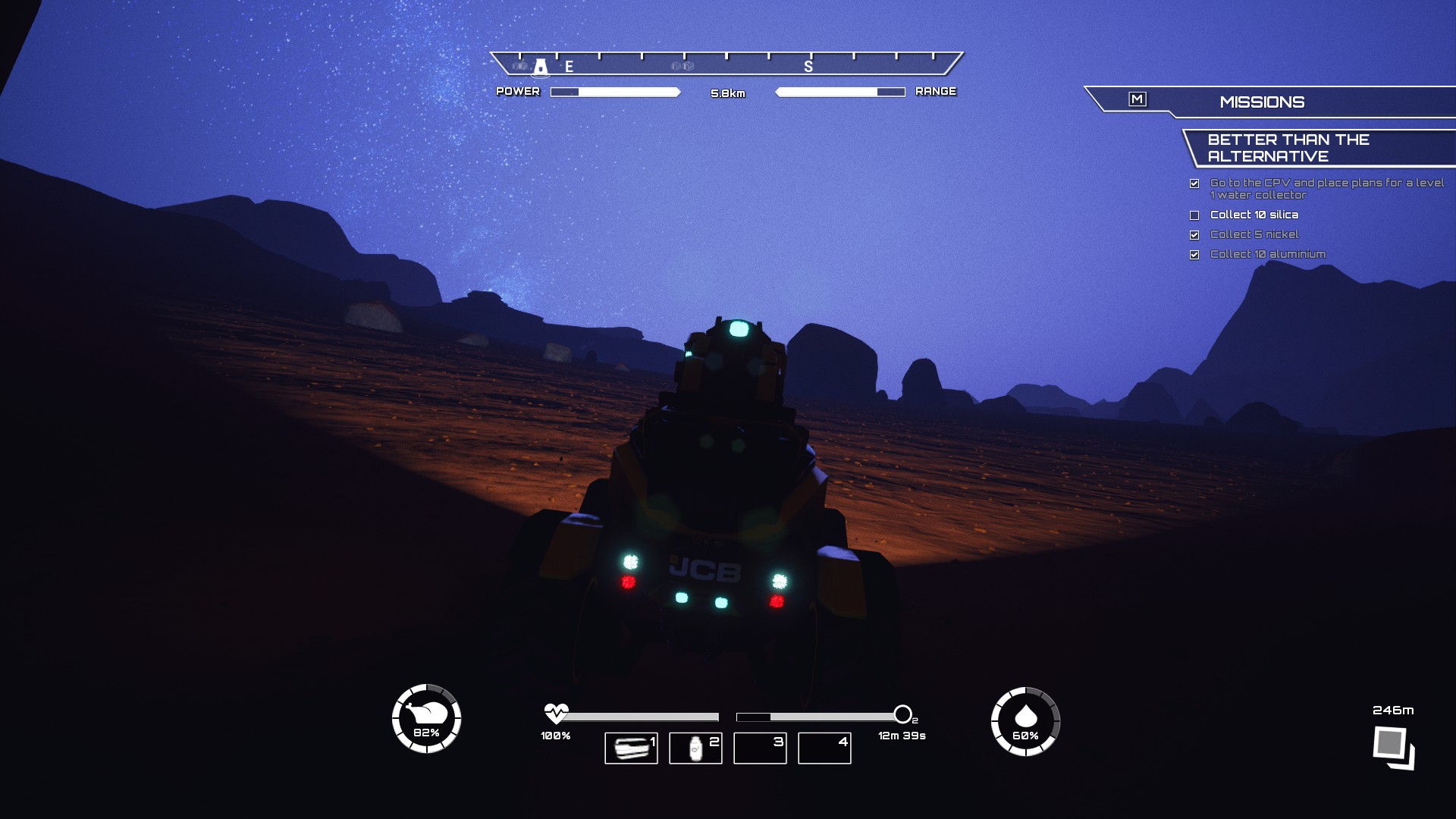 The interface is mostly very nice looking but is not very pleasant to use. The map sometimes moves when you want it to and sometimes doesn’t. Connecting buildings to power will sometimes work and sometimes won’t. There are also a couple of places w the ere text is too large for the available area and gets cut off.

The game uses Unreal Engine 4, so there are plenty of graphics settings. I didn’t encounter any graphical performance issues running, but it did run rather hot.

The game has very sparse music, but it’s well produced and fits well. The initial loading music reminds me of something from 2001: A Space Odyssey, with slow light melodies interspersed with deep reverberating BOOMS. It’s very nice. I noticed only one other ambient background music track.

Sound effects are good, with suitable sounds for an electric construction vehicle throughout. The X-18 motor sounds are particularly good. Interface sounds are appropriately futuristic.

The AI has a lovely female voice to match her portrait. 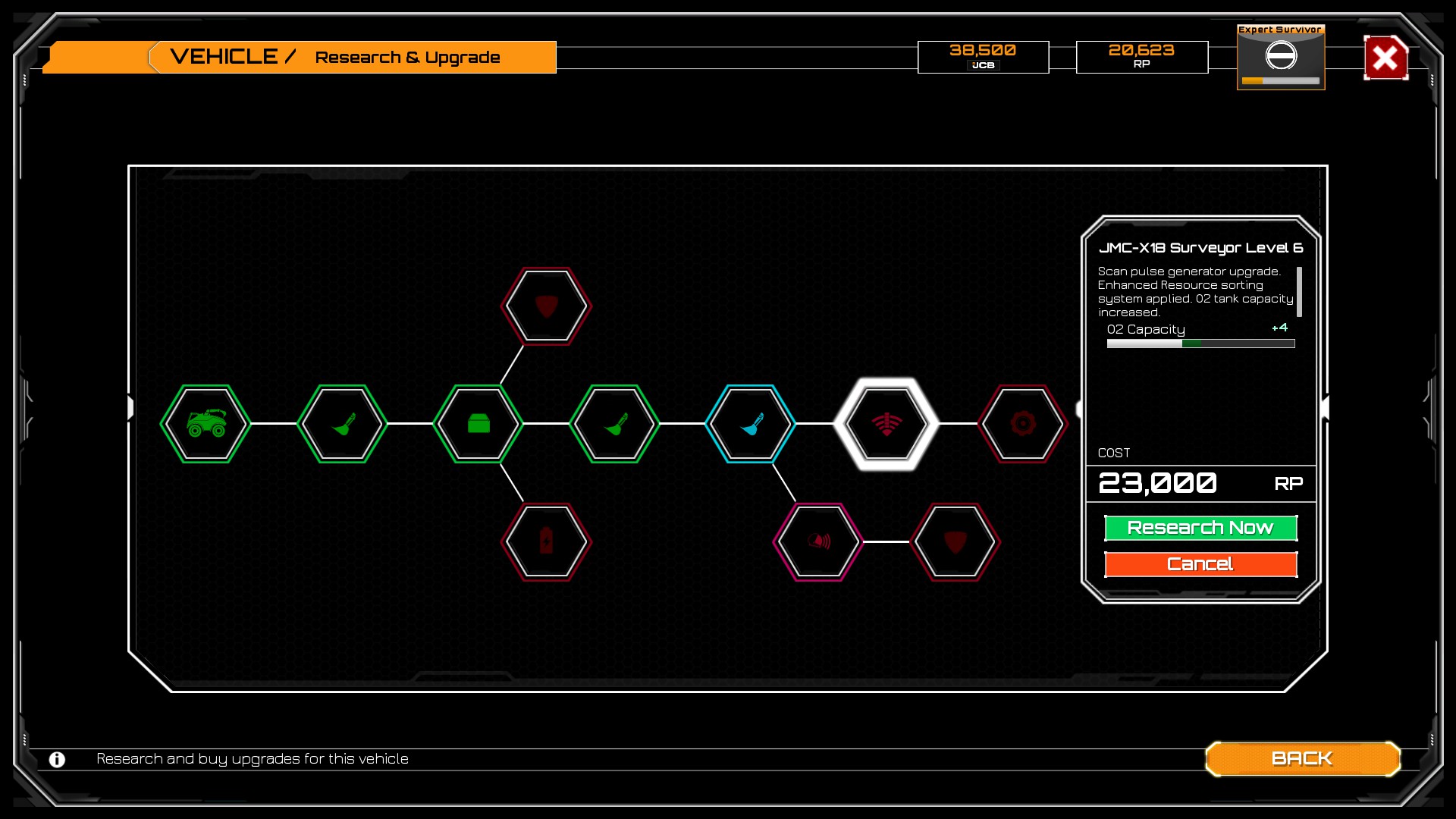 The basic gameplay is similar to most survival-crafting games: find resources, take them back to your base, and turn them into stuff to either help you survive or allow you to more efficiently make better stuff. JCBPM differs from most other games, though, in that a lot of the focus is on your trusty steed: the X-18. Without this you have no hope of survival, so you need to frequently return to the garage to restore its health as well as its Oxygen and power reserves.

There’s a set map that’s the same each time you play; there’s no procedural generation here. Though I quickly became familiar with most of the landscape near the base, it’s still fun to explore new areas. 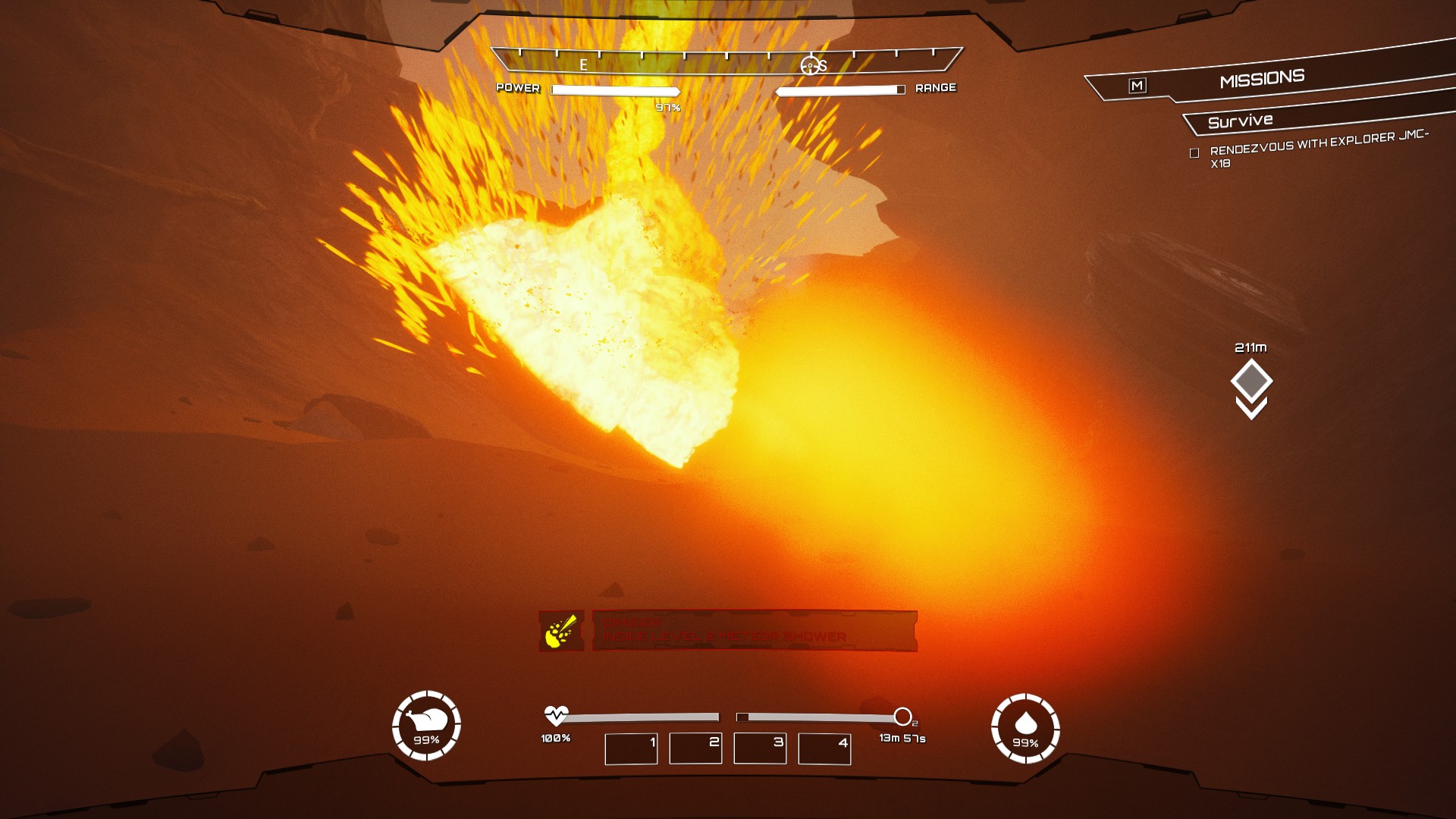 Your part in the Mars colonization seems decidedly unglamorous, as you’ll spend most of your time driving to resource pits, mining resources, driving them back to your base, and dumping them into whatever 3D printer is currently making or upgrading your next building. There’s crafting of items you need to survive, though they mostly (all?) are single-use items, which really doesn’t fit with the ‘realistic colonisation’ goal, where everything should be recycled. There’s also refining, very basic trading, and a large number of missions that make the whole game seem like an extended tutorial as they direct you through building up basically everything from scratch. There’s no multiplayer or combat yet, but both are planned for the future.

Back at base you control placement of new buildings, connections to the power grid, and upgrades. There’s a good range of buildings and upgrades, but the interface makes it all harder to manage than it should be. If I hadn’t had to restart so many times and experienced so many crashes I’m sure I’d be a lot further on than I am now, but even so it looks like there’s enough here to keep even the most even-tempered would-be colonist busy for a long time — at least until the rather limited basic resources run out. 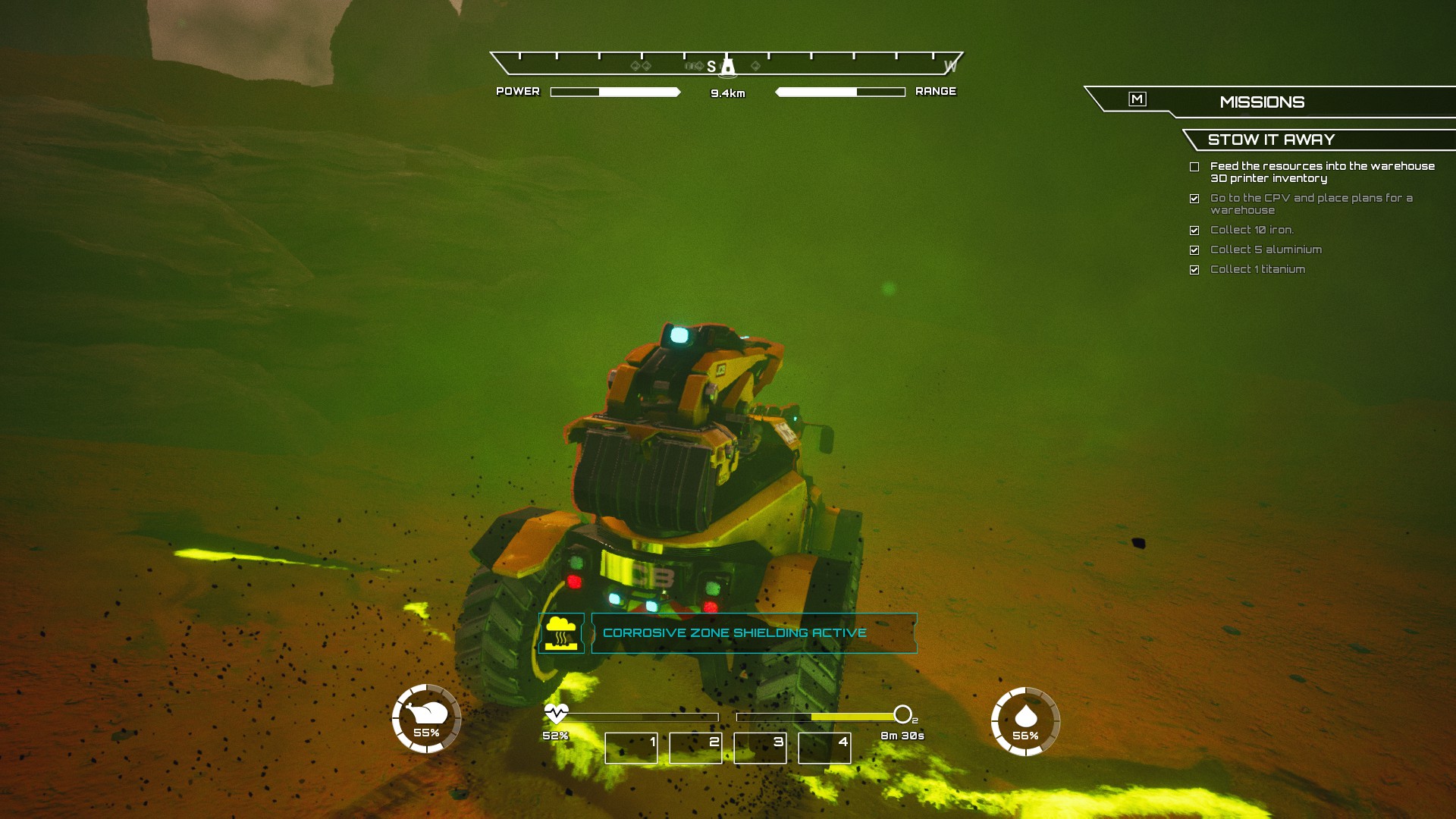 As is the case with many Early Access titles, JCBPM has many bugs and other frustrations. The developers seem to be fairly active and a new patch was released very recently. Here’s a short list of the issues that most got to me, but there are many, many more:
– Very common “Fatal Error” CTD around base
– Very long loading times
– X-18 can get stuck inside world geometry
– Gain RP by completing EVAs, but that’s impossible with the crashing and geometry issues
– Partially built buildings sometimes reset to 0% built after a reload
– When you reload, everything you’ve scanned on the map disappears
– No pause, making it very easy to die of asphyxiation while you’re taking care of a real-world need
– ‘Drop item’ is actually ‘destroy item’
– %-based resource pools don’t work like they should: a 100-unit 70% Fe, 30% Mg deposit may give you 99 Fe and 1 Mg.
– Other assorted bugs: power connections don’t always work, tutorial sometimes gets stuck, some missions require other missions to be completed first (e.g. the alternative refinery requires the upgraded refinery) 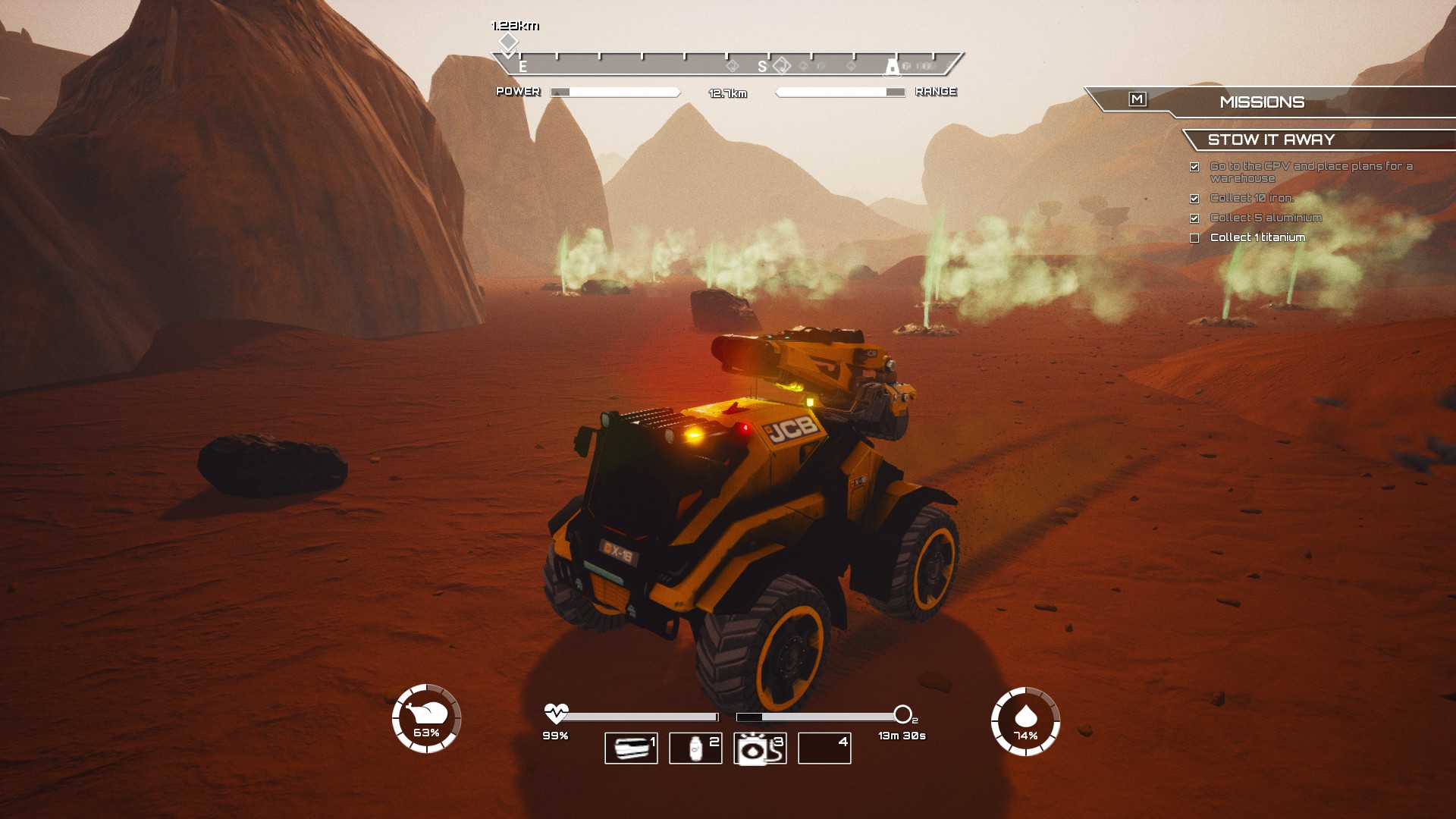 Cons:
– Very buggy
– No pause
– Long load times
– Lots of backtracking and it’s the same each time you play (except for the random resource pools)

I’ve experienced alternating emotions while playing this: frustration first, then enjoyment, and now frustration again. I’ve decided to start over yet again after a series of crashes caused me to lose far too many resources, but my frustration levels are high enough now that I need to give it a break for a while — at least until the CTDs are fixed. If a mostly realistic survival game set on Mars sparks your interest and you’re not quick to anger then by all means give it a shot. It’s a great start, but it still has quite a way to go.