Interstellar Transport Company is a near-future science-fiction tycoon-style management game in space. Can you support mankind’s expansion into Sol and beyond?

Departing from the developers’ previous VR Sports title, ITC is a tycoon-style simulation game set in the near future. The year is 2050, with mankind beginning to colonize the other bodies in our solar system, ITC places you in charge of a fledgling space transport company supporting Earth’s expansion.

The game begins with the moon (Luna) and Mars already colonised and with spaceports of varying sizes present on Earth, Luna, and Mars. You choose your company name and color and then the galaxy is your oyster; purchase docking bays, set up trade routes, and make as much profit as you can while supplying the intrepid colonists with everything they need to survive and prosper on the planets and moons of Sol.

ITC‘s graphics are a mixed bag. The planet and ship graphics are pretty, and the seemingly chaotic mess of satellites about heavily inhabited planets is excellent. But the little details, like the security ships with red/blue flashing lights that aren’t lights and instead seem to just color the whole surface of the ship in alternating red and blue, or the weird scale of the ships and space port compared to the planets themselves, detracts. I mean, is the spaceport above Earth REALLY supposed to be as big as Africa!? 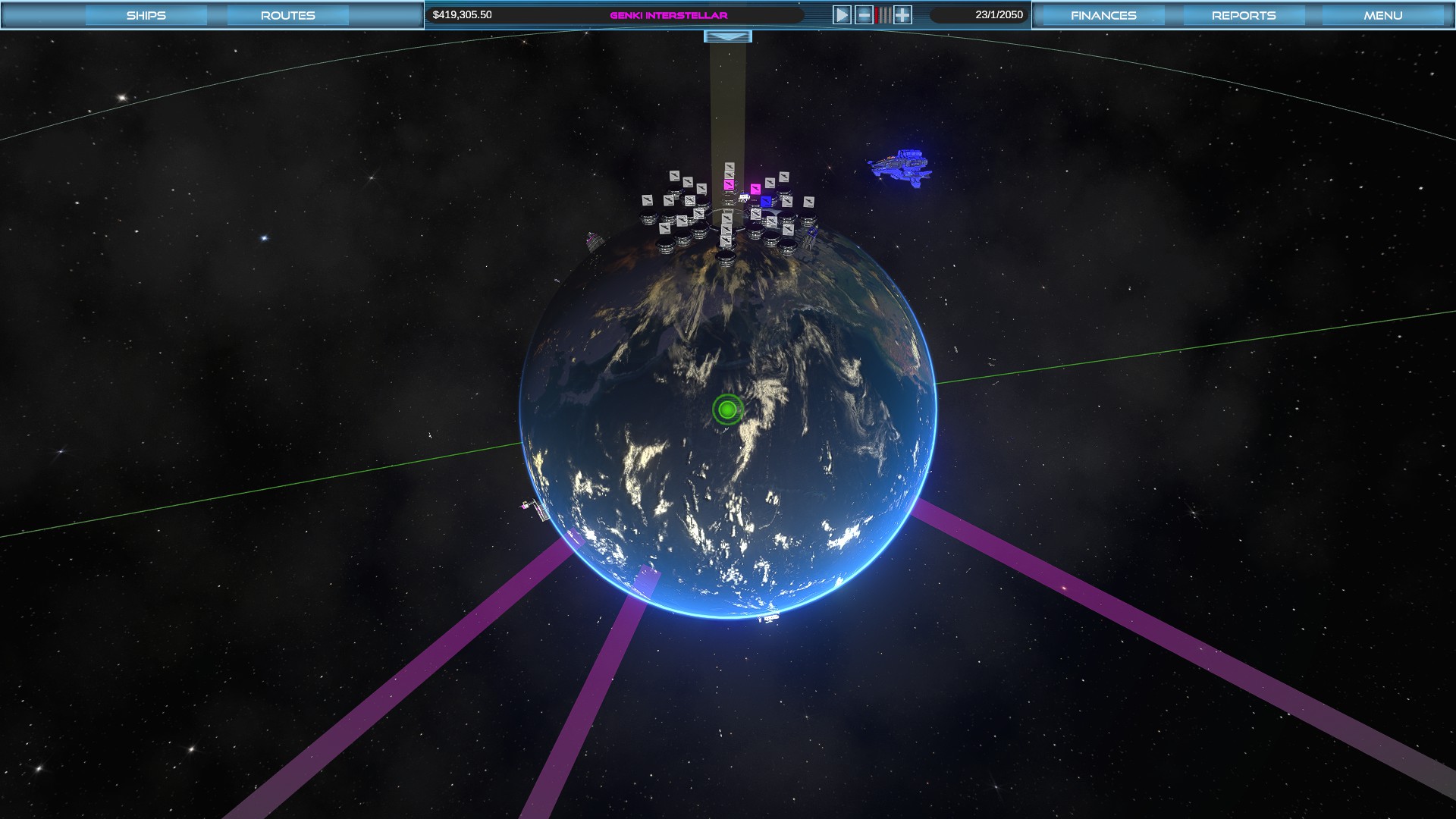 The interface is what you’ll be looking at most of the time and it’s quite large and ugly, with some icons that don’t really resemble much (I really hope they’re just placeholders!). It’s unfortunate that it’s confusing, too. Does a button labelled “disable tooltips” mean tooltips are currently enabled and clicking on it will disable them? I’m not sure. And why can you zoom out from a planet to reach system level, but zooming back in does NOT take you back to the planet? And you can’t zoom out from system level to galaxy level either. ESCAPE takes you from planet to system, too but not system to galaxy; for that, you can only right-click. They’re just a few examples. It’s inconsistent and rather poor HCI design.

I also noticed a weird anomaly popping up on occasion: a faded red icon floating in space near Earth. I couldn’t work out what caused it, but it happened a few times.

There are a few graphics options to play around with. I set everything to maximum and the game moved along smoothly.

The sound in ITC is pretty lacking, but at the same time, I think it’s probably sufficient for this type of game. I believe there’s only one music track: a relatively slow sort of ambient electronic track with assorted electronic sounds and various riffs. I’m thinking “sci-fi industrial ambient” might be a new sub-genre to categorise it.

Sound effects are minimal. Interface response bleeps are a bit loud and the bottle-breaking (?) sound when a new ship is built is terrible.

I have to confess that after my first hour with ITC I was ready to give it a miss. If I’d bought it and been wondering whether to refund it I would have been on the fence. Then I started reading some more of the tooltips and realised there’s a lot more depth than first impressions suggest, and the very limited tutorial really doesn’t do it justice. The tutorial explains how some of the more common parts of the interface work, but that’s it. It’s more like guided technical documentation on a small part of the UI than a proper tutorial. 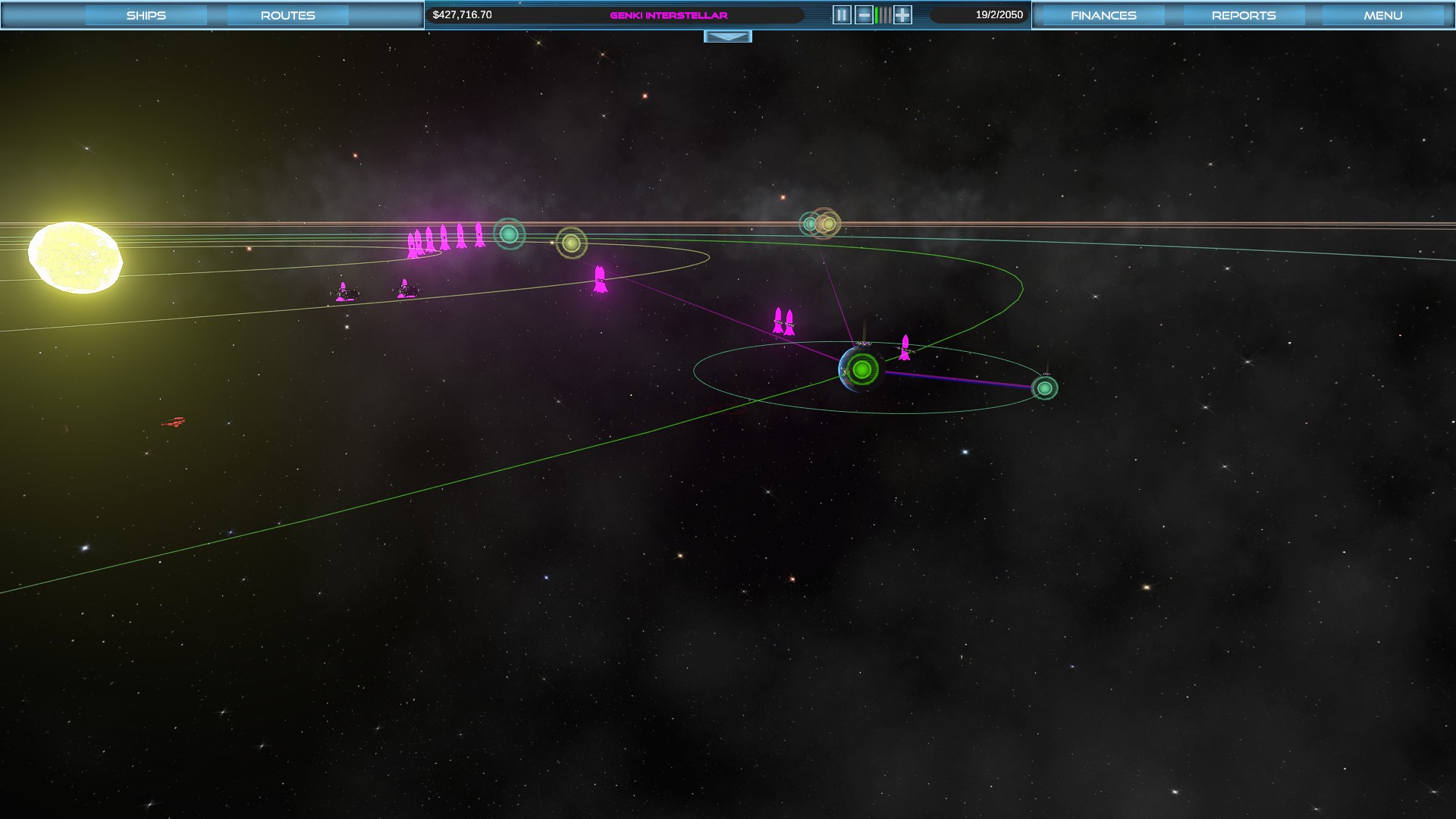 The game proper begins when you start a new predefined or custom game. Though the tutorial recommends the former, I’d suggest the latter might be more fun for beginning players, as it lets you customise the number of AI companies as well as the galaxy size and, importantly, your starting cash. Regardless of which you choose, there’s an inevitable “Now what!?” moment when you begin.

The basic gameplay is very limited. You set up trade routes among the planets and moons that have been colonised and you buy and fit out space ships to ply those routes. And that’s it. There are single-use rockets that are cheap and fast to build, letting you deliver resources even if you don’t have a space port lease at the other end, and larger multiple-use ships that require a certain level of space port to build, and a lease at a certain level at the other end in order to land. You choose the types of cargo bays fitted when you create a ship and there’s no way to change it later.

It was only after I’d been playing for a couple of hours, making tons of money, but becoming rather bored, that I started to wonder what the rather abstract resources I’d been transporting actually represented, and then I discovered the game’s hidden depths. Each colony requires people, obviously, but also machinery in order to efficiently produce other goods. Dilithium crystals — a rather rare mineral, I discovered — are required for interstellar travel, but you need to find them first. 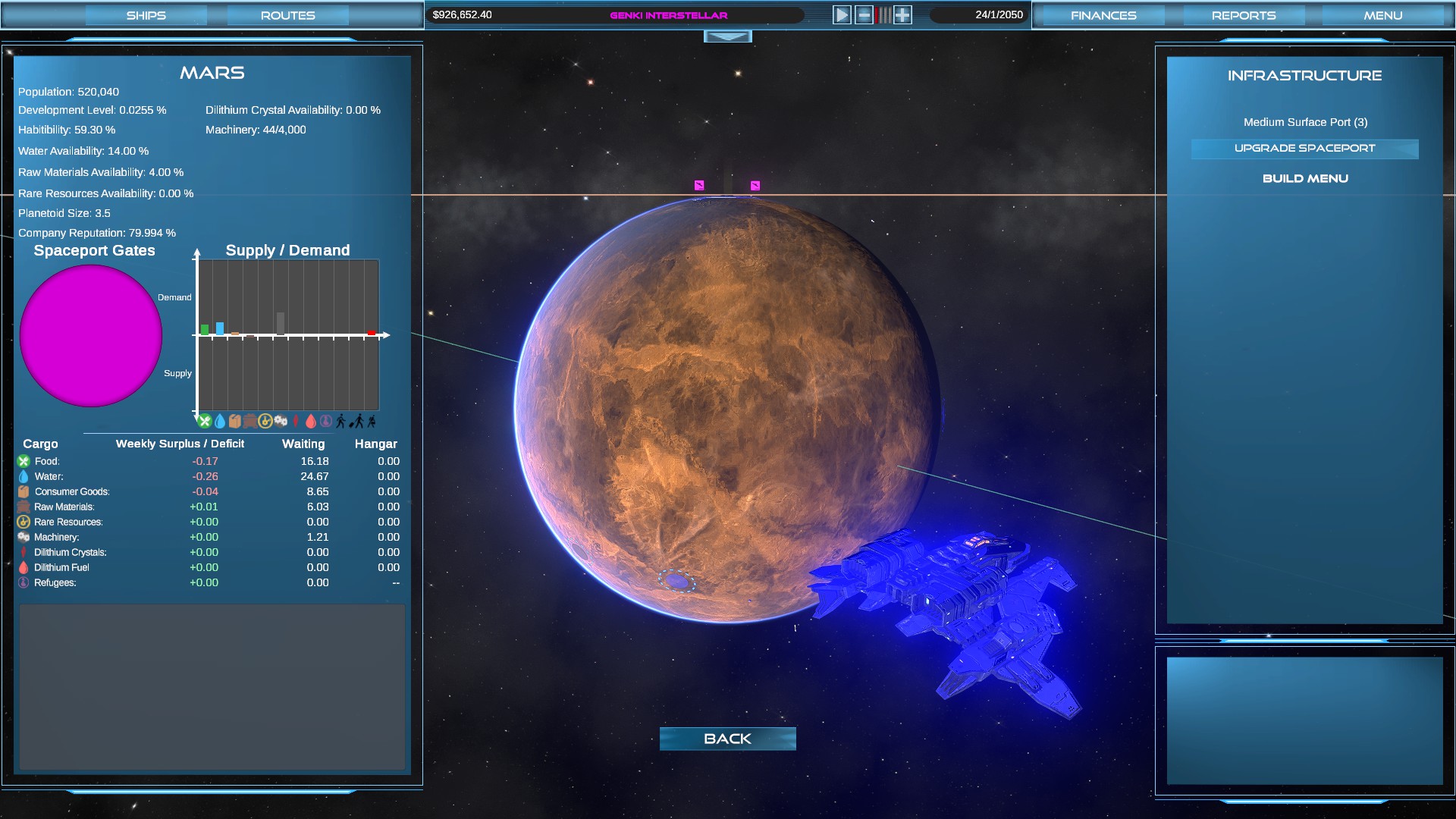 After I discovered these hidden depths I became far more interested in the game. The early stages are all about positioning your company for further expansion, but with very limited tutorials it was only through distracted fiddling that I found out anything about this. In Sol, everything hinges on Titan.

Even after this discovery I still felt a bit overwhelmed by the game’s deficiencies. I’m sure the developers will make progress — after all, that’s what Early Access is all about. Here’s a short list of some of my current complaints, anyway:

– No automatic pause in management or system menus.
– It’s easy for your ships to sit there doing nothing. It needs alerts for idle resources.
– It’s hard to see a ship’s current location.
– Fuel usage isn’t explained. How does this work? Does it matter for interplanetary (not interstellar) runs?
– Finding buildings on a planet is more difficult than it should be.
– Orbits always seem to be circular!?
– How does speed affect efficiency? Each ship should have a tonnage/speed efficiency rating.
– What does “Player Difficulty” setting mean in a custom game? Surely that depends on the player!?
– No way to edit cargo bays on an existing ship. Why not?
– No way to ensure a ship is completely full before it leaves; passenger compartments almost always leave empty.
– Can’t tell at a glance which resources are going to be picked up and which ones aren’t; it’s annoying clicking on each resource to check its current settings.
– Ships will launch with some bays empty on their first flight. MAJOR issue.
– No way to specify a save name — it looks like there should be, but it ignored me and used an autosave slot.
– Everything moves slightly to the left when decreasing time speed or to the right when increasing it.
– Duplicate ship button doesn’t work well. Starting point and auto-launch aren’t duplicated properly.
– Order ship button sometimes stops working entirely, requiring a restart. 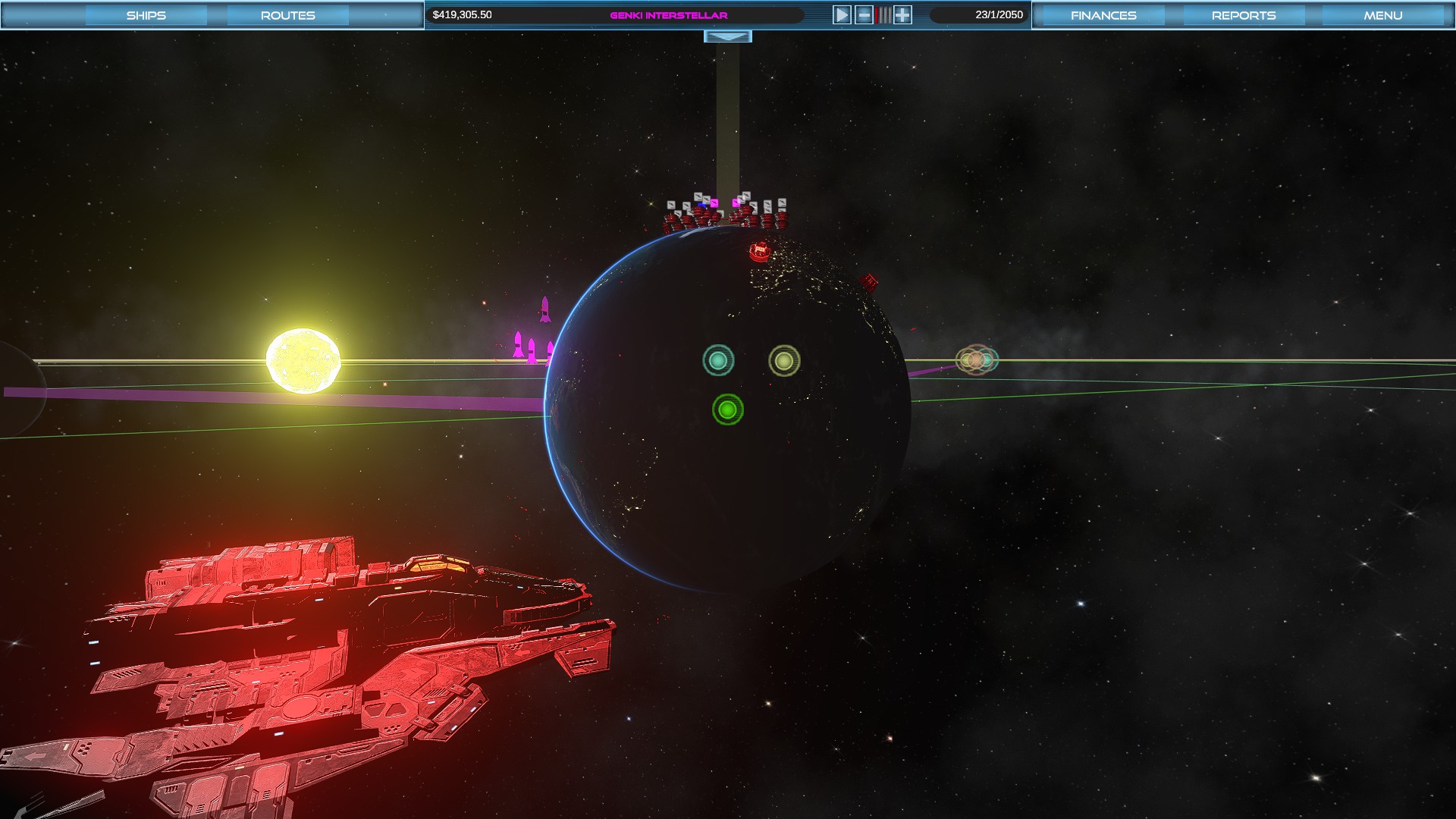 In spite of the frustrations above, and my first impressions — no research, no ship upgrades, and limited buildings available — the core mechanics are sound and there’s a lot of potential. The balance between transport and production is a good one. If the interface can be fixed and the bugs ironed out, ITC could be a rather impressive game. 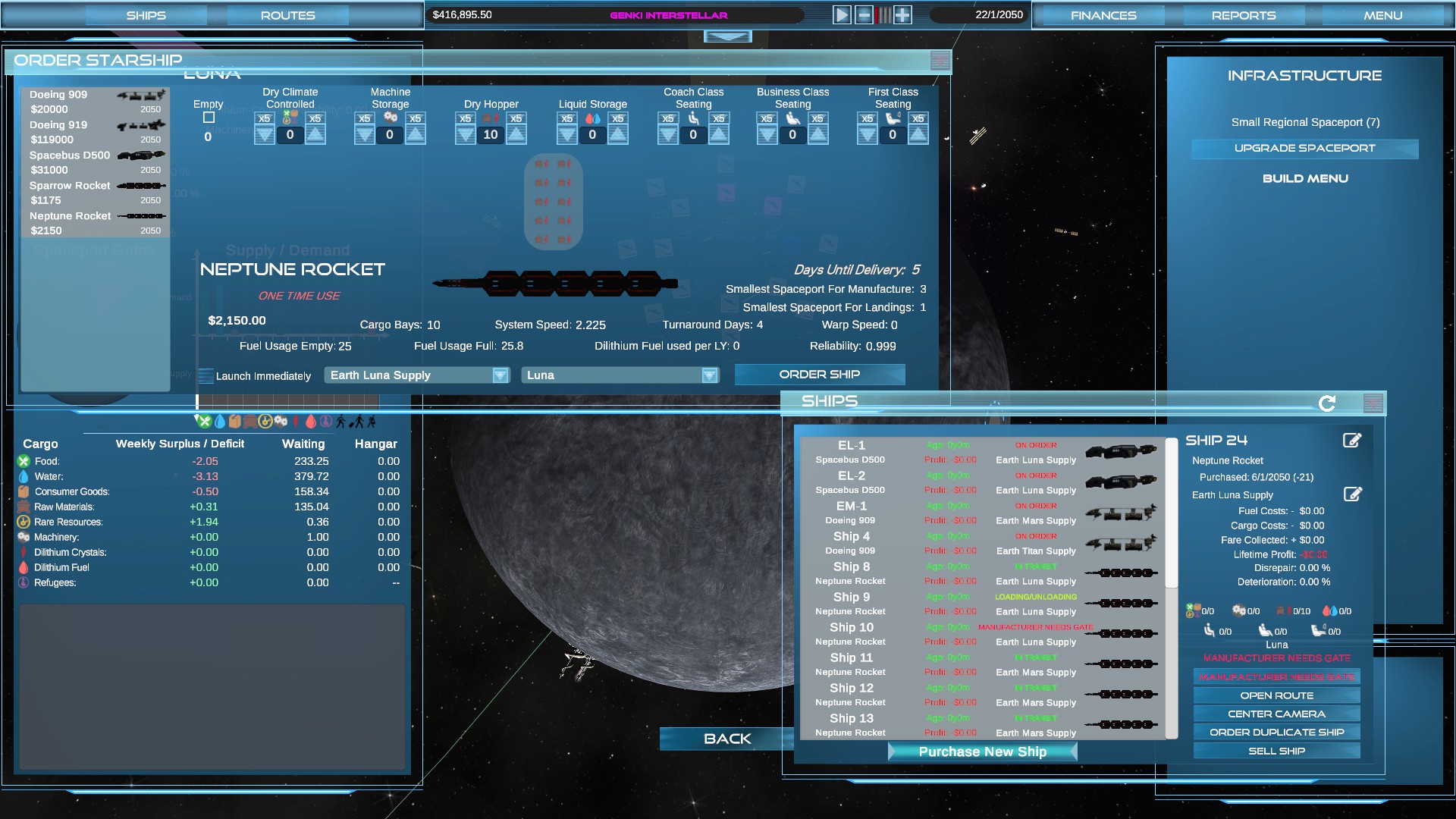 Interstellar Transport Company has potential, but it definitely needs work. The tutorial is basic and much of the game’s more interesting detail is hidden in tooltips. The core gameplay is interesting but can be slow to start and currently requires too much micromanagement to work around bugs. The UI needs a major overhaul; at the moment basic tasks require too much effort. It’s also rather buggy, but in Early Access, one has to expect that.