Castle of Shikigami – it’s been a very long time, but how does it hold up now that it is on PC?

Once again, Degica has brought another console shmup to PC, continuing their recent trend of doing so.  I have constantly been very, very grateful for this as they have brought over many high quality games of this genre that otherwise would be unplayable to many.  Unfortunately, this time, the game they have chosen for this treatment is definitely a dud. 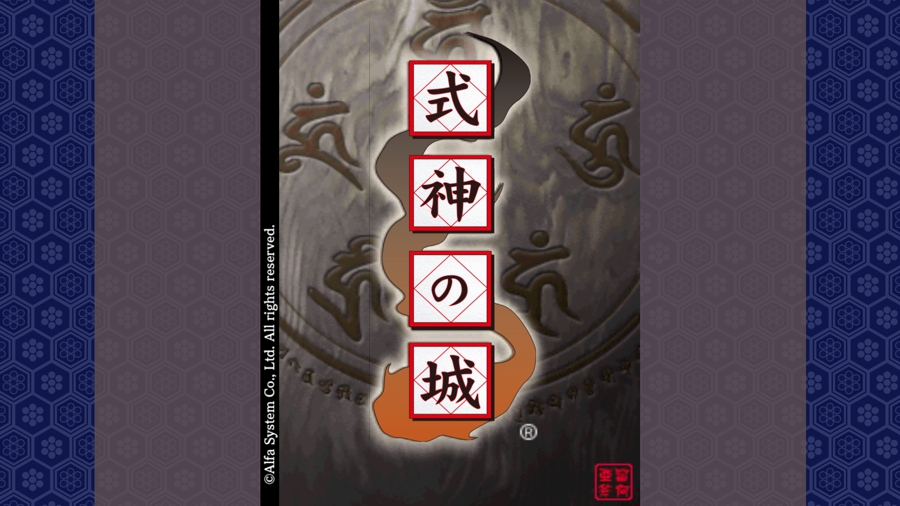 Now, I want to say one thing as I begin the review here:  I have a lot of respect for Degica as a whole, and thus feel the need to point out that the many issues I have with this game are in fact not their fault.  Castle of Shikigami is actually an older game, having first appeared in arcades, and then on the original Playstation.  Like many other games that Degica has brought to PC, this is simply a port of that version. So despite everything I will say here, I strongly recommend checking out Degica’s other releases and supporting what they are doing.  It is also worth noting that the actual port is of high quality… there’s no goofy problems here caused by the transition from console to PC.  No, this game’s problems are all within the gameplay itself.

Castle of Shikigami is a fairly typical bullet-hell game, where the stages scroll vertically and you are bombarded with a million bullets from all directions, with only your tiny hitbox allowing you to survive.  The good part of it is that the game gets the controls right.  They work well, and I never had any issues.  Tight and responsive and easy to use.  What it gets wrong, however, is basically everything else.  Now, to be fair, as I said Shikigami is a very old game at this point, and the genre wasn’t nearly as refined back then as it is now.  But even so, the PC version is a recent release, so I am holding it to the standards of the genre as it is now, since there are so many other options as far as games out there that you could buy instead.  I’ve been familiar with the Shikigami series for a long time now.  The second and third games are just wonderful (originally appearing on the PS2), with excellent gameplay, mechanics, design, visuals… you name it.  But this first entry, not so much. 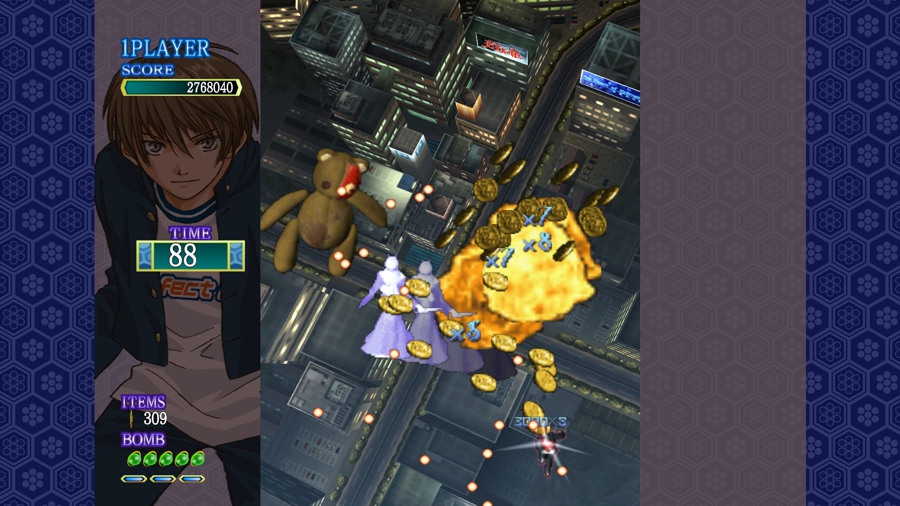 Probably the biggest thing that is likely to be noticed by most players is just how utterly bland the game is as a whole.  Every part of it feels very generic aside from the playable characters themselves, which we’ll get to in a bit.  The stage backgrounds are boring, enemy designs are very generic and uninteresting, even the boss fights, usually the highlight of this genre, are dull in comparison to basically any other game.  Nothing about the original Shikigami is at all memorable.  Which in many games wouldn’t be a major problem, but here that blandness leaks into the gameplay itself.  Bullet patterns are the big focus of any bullet-hell game… the wild, flowing, chaotic-yet-structured barrages that every enemy will fling at you, covering the screen in glowing death and challenging you to navigate the shifting labyrinth that they form. Many games have very creative patterns that are a memorable aspect themselves, but not this one.  Both enemy and boss patterns are very generic, being simple in both form and function.  You’ll see lots of basic spreadshots of all sorts, straight “beam” formations, basic spirals, and honestly not a whole lot more.  Well, no, there is one other type that you’ll see over and over and over: Random sprays.  The sort of pattern where a great many bullets originate from a single point, but they fly out in heavily randomized directions, sometimes with the velocity of each shot somewhat randomized as well.  This type of pattern has a place in bullet hell games, but it’s usually used very sparingly, and there are good reasons for that… particularly when the game mechanics are simply not at all calibrated around it. 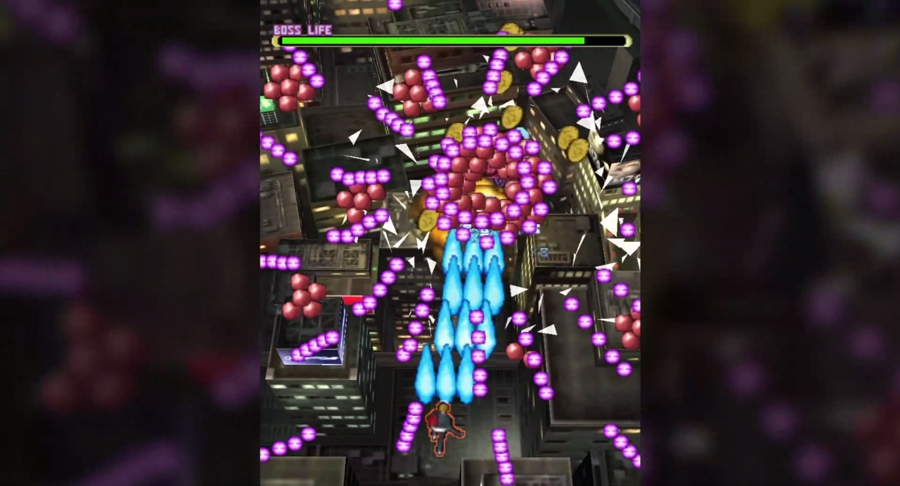 Now let’s go into the game’s mechanics a bit.  As a whole, the concepts used here are actually pretty good, and carry into the other two games as well.  The problem is that the design of basically everything else does a good job of ruining all of the potential that these mechanics have.  You have a pretty wide selection of possible characters to choose from.  Each of them has two unique attacks:  A basic shot, and a special attack.  Well, I say “basic”, but even their normal shots are actually quite varied, making even that aspect of each character different in terms of how best to approach them.  But it’s the special attack that makes the series what it is.  Special attacks in Shikigami are typically extremely quirky and rather weird, usually being difficult to hit things with.  Your character’s movement slows down quite a bit while using this, as is typically the case in bullet-hell games.  Special attacks, unlike in other games, are not really about obliterating waves of foes.  Here, instead, they are about scoring high.  The game has a “graze” mechanic, where getting close to enemy bullets increases your base score multiplier, for the points you get both from destroying an enemy, and from collecting the coins that they drop.  However, coins, which are extremely numerous, typically are very hard to collect as they fall straight down, meaning that you’ll miss the majority of them.  And that’s where the special attack comes into play.  When an enemy is defeated with the special rather than the basic attack, the coins will not fall straight down, but will instead be sucked into your character, maximizing your scoring potential.  In the Shikigami series, the path to big scores is to do this as much as possible while being very close to enemy bullets during the entire process.  Adding to that, your main shot also increases dramatically in terms of damage and even size when you are grazing an enemy bullet, allowing you to do big damage if you’re willing to take some risk.  In addition to all these things, you have other fairly standard mainstays of the genre, such as screen-wrecking bombs, and your attacks powering up as they increase in level.

All of that is well and good, but for any game of this genre, great mechanics mean nothing if the game as a whole simply is not designed very well, or is not balanced around those mechanics.  Random sprays and enemy hordes will really screw with your scoring potential in each run.  In the other two games, the randomness is dramatically lessened, which is good as these mechanics work very well when you have the ability to memorize every aspect of the different levels.  But with such high randomization as exists in this first entry, this, for the most part, simply is not viable.  Sometimes a partcicular pattern will be structured in such a way as to easily give you big points… other times the random blobs will make it so much harder, and not due to any fault of your own.  Most good bullet-hell games go out of their way to avoid heavy randomness in patterns or enemy placement for this very reason, but it’s used very frequently here.  Not to mention that the sheer blandness of the enemy patterns ends up making the whole graze mechanic just alot less satisfying than it is in the other two games, and in most games that use similar concepts.  These patterns just arent very interesting to navigate and dodge, and I always find it hard to get hooked on the game’s scoring system despite the potential I know it to have.  The game as a whole also ends up having rather low difficulty in my opinion due to the general lack of complexity.  Simply having a ton of bullets on the screen does not produce challenge… it’s what is done with those bullets that creates threat and tension for the player. 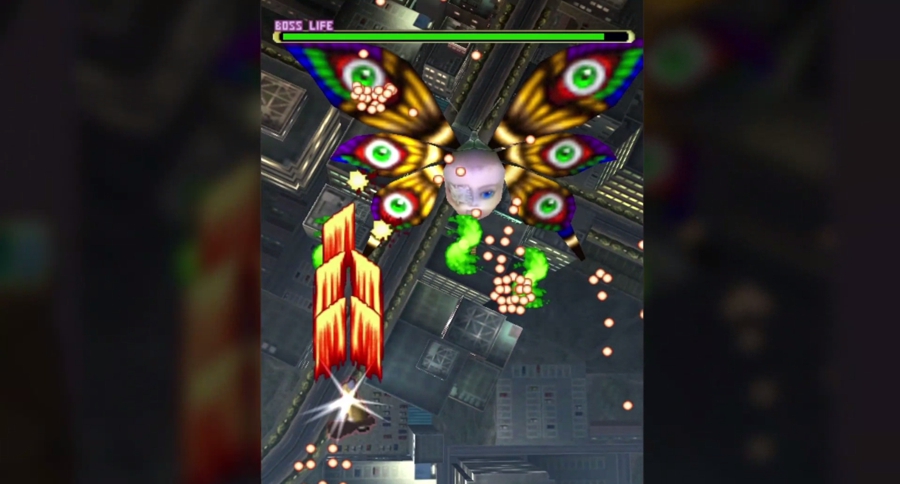 In addition, there is the issue of balance.  Which is to say, there is none.  Scoring potential differs very, very dramatically from one character to the next.  Now, this isn’t exactly unheard of within this genre, but here it’s taken to a wild extreme.   For example, one character’s special is to fire three tendrils of electricity directly in front of him.  It is a very short range attack, but the tendrils will lock onto any enemy they touch until that enemy is defeated.  Meaning that you must first get close enough (very close) to accomplish this (difficult in a bullet hell game), and then put enough distance between yourself and the enemy… while moving very slowly… to survive until that enemy goes down.   Whereas another character, who I shall simply refer to as Win Button, is the direct opposite.  Win Button’s special attack is  very, very simple:  While you hold down the button for the special attack, a spirit that I can only imagine is comprised of nothing but caffeine darts around the screen like a demented cat, attacking and destroying anything it latches onto rather quickly.  It’s movement isnt random, instead darting perfectly from one target to the next, never missing in it’s endless pursuit of berserk murder.  It doesnt matter whether the target is a basic enemy or a giant boss… Win Button’s ghost friend will slaughter it, while you stay at any distance you want, not having to worry whatsoever about aiming.  Just hold that button down and the ghost will take care of the destruction for you, with no limits at all about the time you can use it.  Now, to be fair, this problem with character balance is actually present in the other two games as well… but it’s far more excusable in those considering that the design as a whole is just so much better.  But here, it just adds to the already problematic nature of, well, most of what you’ll find in this game.

Overall, it’s not so much that the game is truly bad… or at least, that’s what I’d say if I was reviewing it back around the time it released originally.  But we’re in 2017 here, and the genre has come a very long way, and there are just so very many better options out there to compare this to.  By the standards of the genre as they are now… this one just isn’t good.  Not everyone will agree with me of course, there are some people that are definitely fans of this one… but in my view at least, the only reason to buy this is to support Degica’s efforts in bringing more games to PC.  Hopefully, better ones in the future.  I’d love to see them bring Shikigami 2 and 3 to PC.  Those are truly great, and I highly recommend checking them out.  This one though… just pass on it.  It just hasn’t held up well over the years.