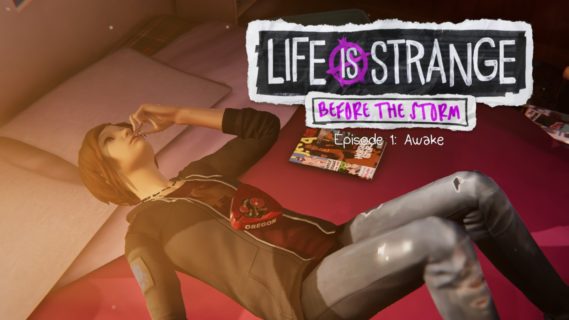 Life is Strange: Before the Storm – Episode 1: Awake

All evidence points to…fire in your future.

It has been of couple years since Life is Strange first came out and by now a ton of people have experienced the story. It feels like ages ago since we played as Max Caulfield and we thought that it was the end of all the other characters that showed up along the way. That is until the announcement that we will revisit Arcadia Bay not as Max, but as Chloe in Life is Strange: Before the Storm.

We come in three years before the main events of the first game, more specifically after Max packed up and moved from Arcadia Bay and Chloe is left hurting. It does not help that Max took off after Chloe’s dad died and contact has halted. With Chloe being the local outcast at Blackwell, who can she go to when her soon-to-be stepdad, David, becomes unbearable as he starts hanging around the house more? Of course, she has a journal she can have letters addressed to Max that will never be sent, but even that brings bitterness. The reality that she must have done something wrong if even Max does not bother contacting her. It comes as no surprise that Chloe might act out and jump into at the opportunity of hanging out with the famous Rachel Amber. 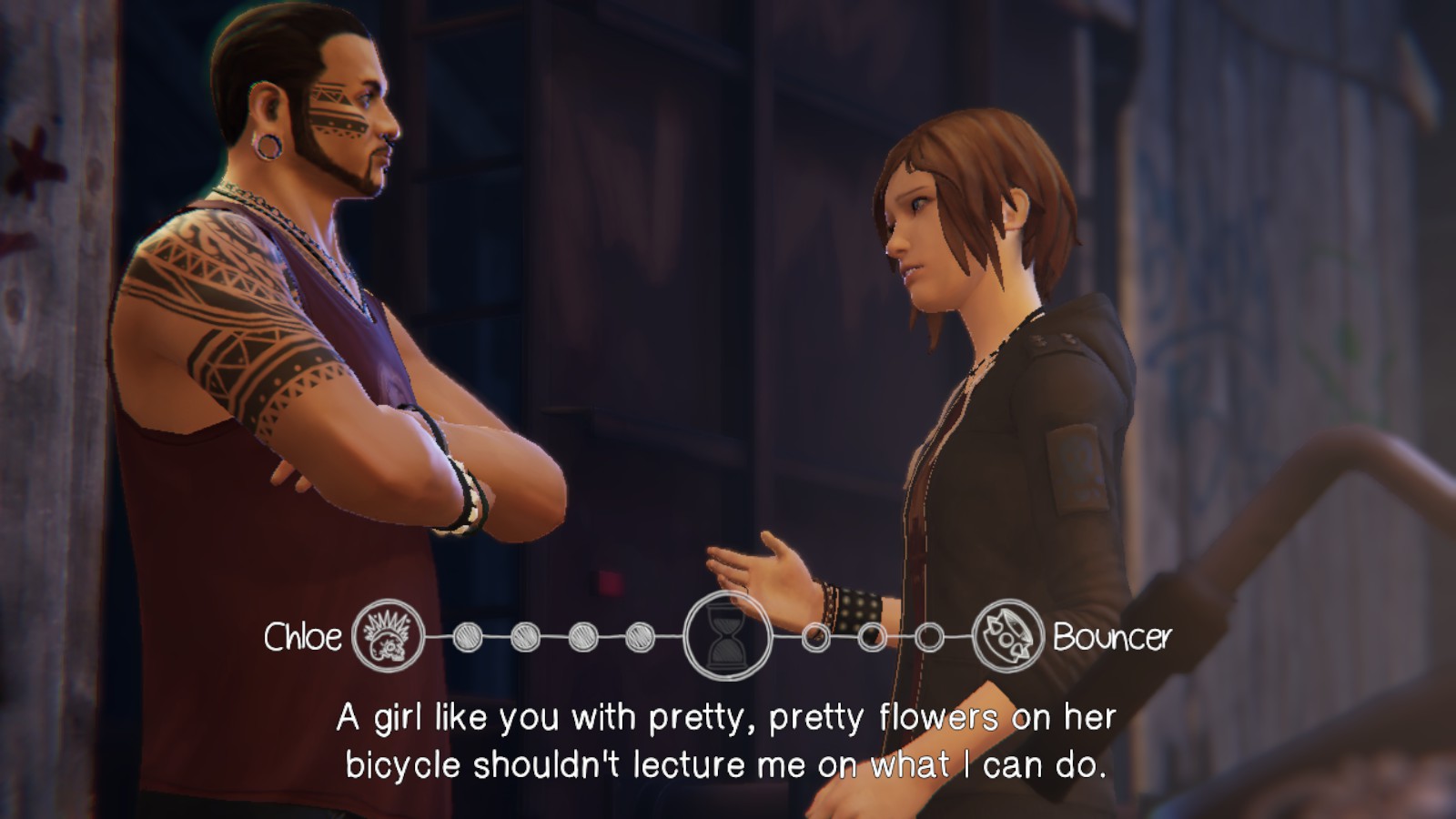 Before the Storm brings in a different mechanic called Backtalk. Here you have to listen to what your opponent said to you and make it backfire on them. If they call you childish, bring up something childish about them and Chloe will say it with her aggressive smart-ass attitude. And if it was the wrong choice, Chloe gives off a really weak insult that the opponent will shut down. With each successful backtalk you will gain a point and if you fail, or time runs out, your opponent will. Depending on who you go against, the number of slip ups vary. Though honestly, it really has nothing substantial to do with the story. Either way, what was meant to happen will happen anyway.

Let’s get into the choices you make. While we only have one episode, and a month to a month and a half till the next episode is out, a lot of the small choices have not made a major effect on the story just yet. However, the choices based on the main plot will lead to the plot area no matter if you made the choice that would have of gotten you out of it. There are also some choices that are mandatory, but there are no statistics at the end of the episode like in Life is Strange to review all of this.  Some backtalk is necessary, though.  By the time you do the first one, it feels more like the old Chloe we remember, and who can pass that up rather than opting out of it.  A few choices will prove to be less than helpful. There is one that you notice during a DnD game, which is one of the best moments, that is mentioned if you make a certain choice. If you do not, though, they will ignore it and continue on what happened if you did it.

Instead of having Max’s collectible item being photos, Chloe’s collectible is graffiti. Once you find a spot, you will be able to choose between two options before Chloe takes out her marker and writes or draws what you picked. This seriously showcases her streak of rebellion, especially when the targets go from school walls to saws being used for decoration (and honestly making it look better). 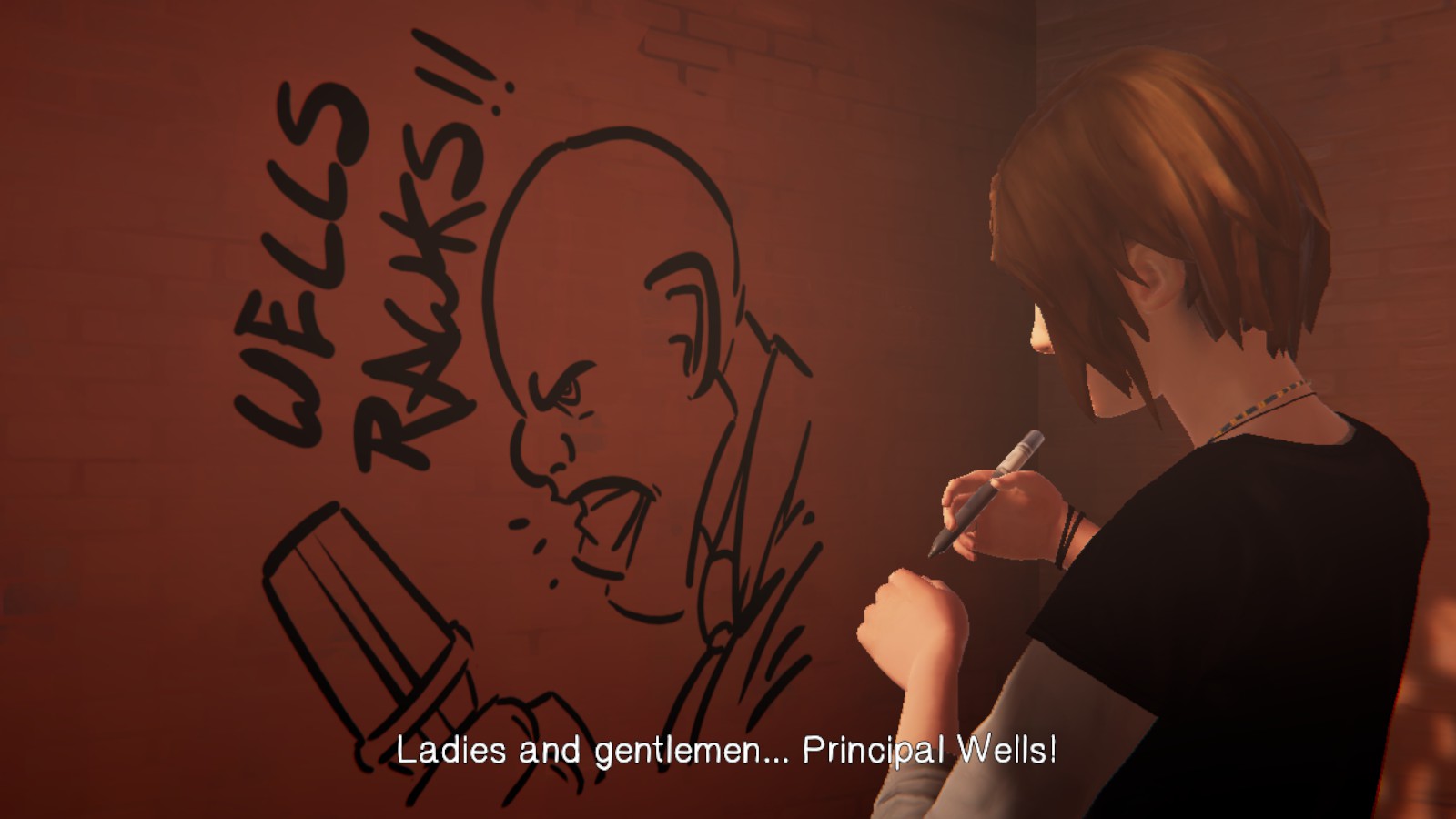 Undoubtedly, the game does pick up once Rachel appears. Before, it gets overbearing with how many cringe moments you get. You understand the whole ‘she likes fire and wants everything to burn’, how she loves drugs, and that she hates David so much she thinks about killing him. You really get the impression that Chloe is not worth being in her head. We all remember our years that we look back at how cringy we were, and I do think it is realistic in that way as I do see Chloe looking back at what she did after a couple years. Since most of us playing already went past this phase, it is obvious. Before the Storm is strong when it goes with Chloe’s and Rachel’s developing relationship. We get to know about her more vulnerable side that we heard about when we were playing Max. Chloe couldn’t tell Max in person about her problems, and I do understand that it escalated with her teen angst self, but it is understandable that she jumped at the chance of being friends and loving Rachel so quickly. 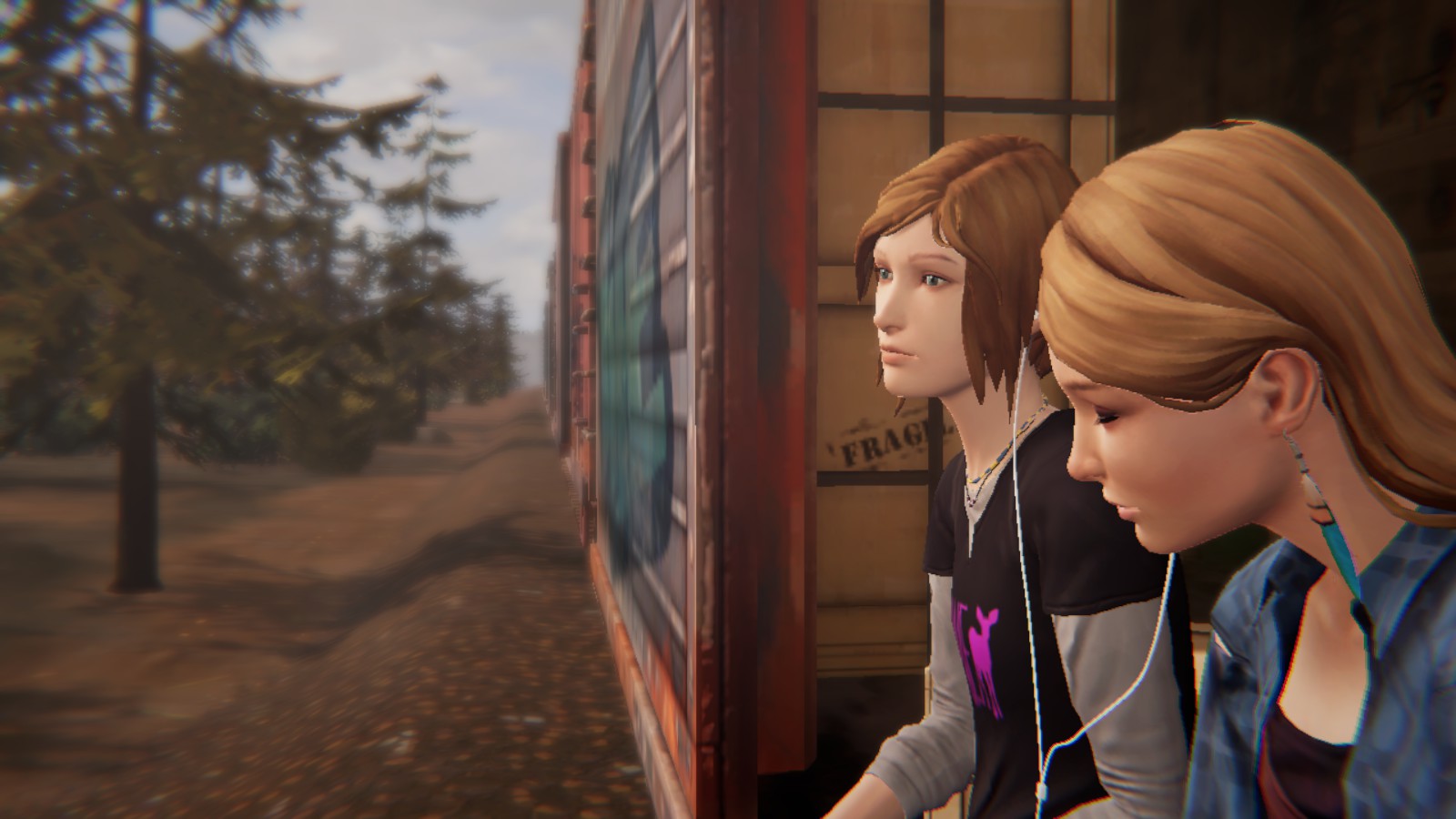 Though at the same time, the part that makes Rachel’s character interesting is that we had to learn about her by second-hand experience. Which does culminate into why she was killed in the way we heard about in Life is Strange. In Before the Storm, we already know what is going to happen with Rachel and how this relationship will pan out. There will be no surprises as it was definitely an easy move to make a prequel based on a character we know about that died before the first game started. Rachel still holds secrets, but her life has a timer that we are constantly aware of.

Let’s address the elephant in the room, Chloe character has a new voice actor. Honestly, it is not noticeable if it has been a while since you played Life is Strange. Though it does get evident when it gets more emotional as the voice breaks away from the gruff sound in the middle of a sentence. Otherwise, she does a good job filling in. The other voice acting has retained the same amount of quality from the first game.  The soundtrack still sounds as good as Life is Strange’s soundtrack too. 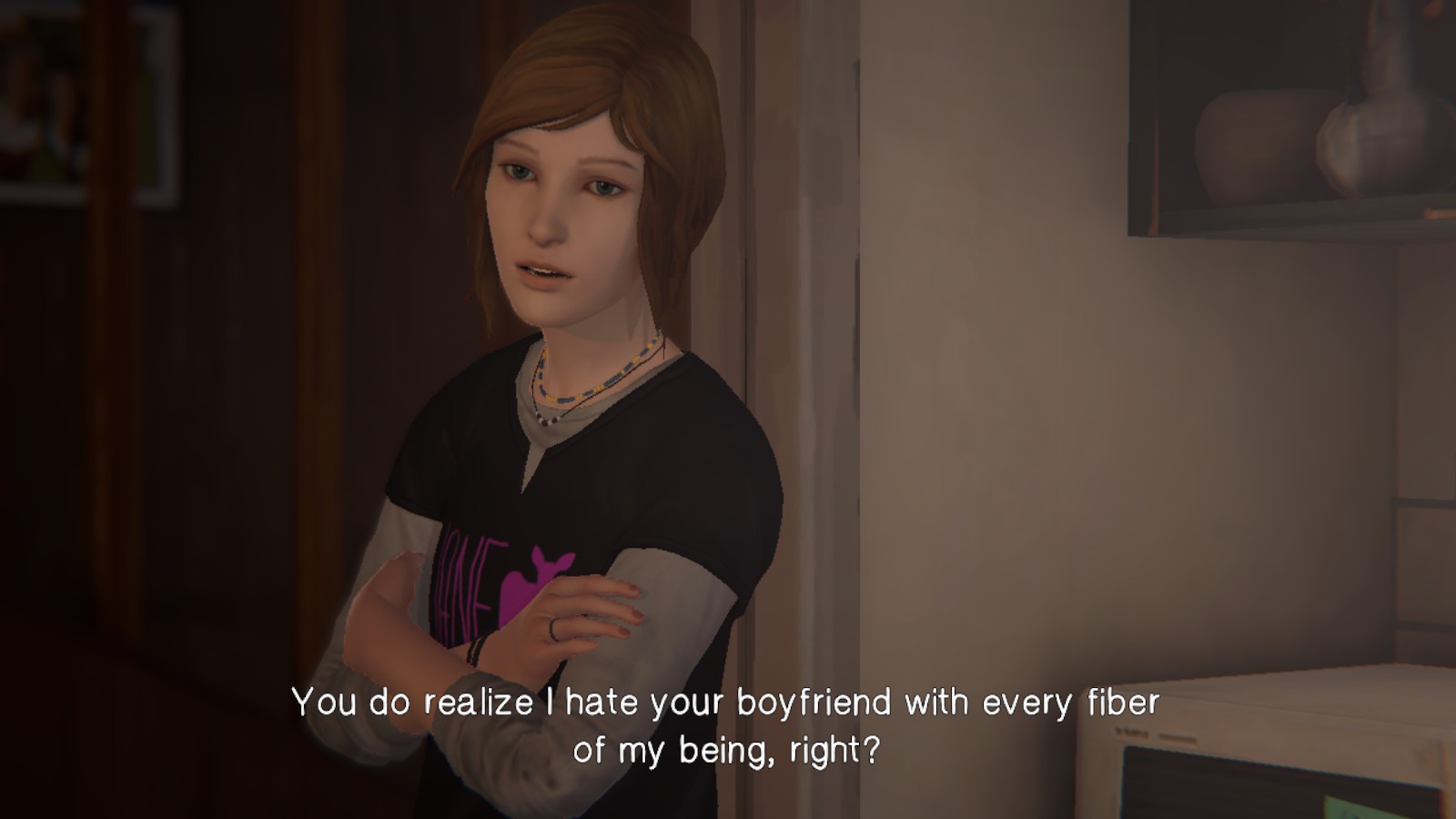 Before the Storm relies heavily on the player experiencing Life is Strange beforehand, mostly showing us how you will view Chloe. Without prior knowledge of the events coming up that will change her, Chloe just seems like an angsty teen that takes drugs, steals, badmouths – which somehow gets her out of trouble-, and sprays graffiti on walls. This first episode certainly does not paint her in a good light for the players. You will also have a stronger connection to Arcadia Bay and the various objects and events that you will remember. 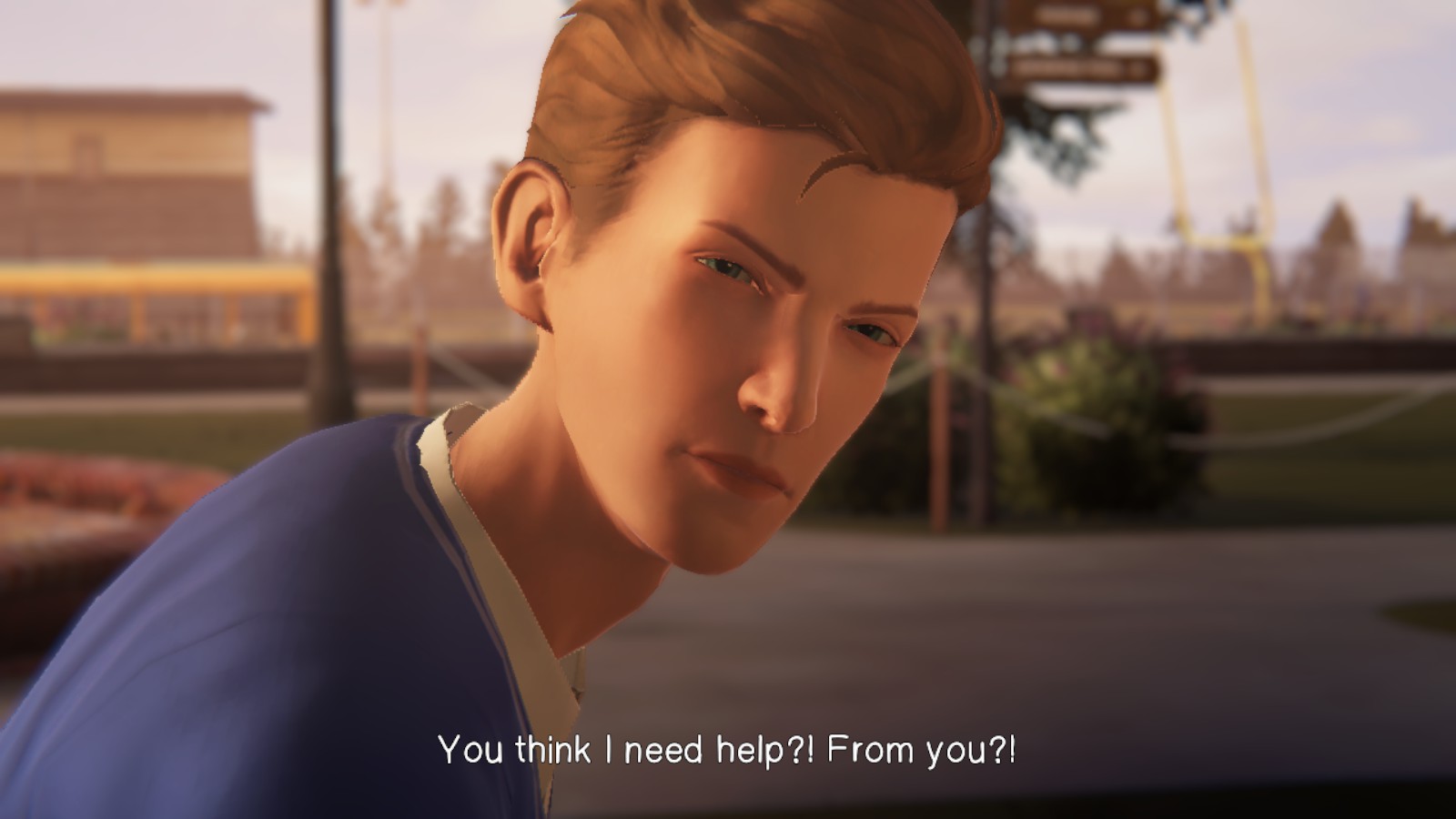 + Realistic characters
+ Stays true to Chloe’s character
+ Backtalk mechanic, but still can be worked on
+ Letters addressed to Max
+ Soundtrack

– Foreshadowing obvious
– Lots of reliance on the player recognizing a lot of areas, items, and people from the first game

Life is Strange: Before the Storm brings us to the past in the shoes of Chloe Price. Three years before the main events took place, we focus on what made Rachel Amber special to Chloe while also giving us insight into how Rachel may have cemented herself as the perfect angel in the minds of most people even though she has flaws. When it comes to looking back at someone that was important to you, only the good moments will come to mind. Before the Storm has flaws, but those flaws do not take away that it is fun to play. With the time period we were placed in and knowing this will end around six months before the first game, as we will not see Rachel’s fate, it will be interesting to see how they handle time skips, if they do, incorporating choice consequences, and how Rachel began skirting around Chloe. I do recommend that if you hated Chloe, or just hated Life is Strange, I do not recommend this. If you have not played Life is Strange yet, I recommend playing that first before moving to Before the Storm.