An old-school FPS that for once manages to do things right and then more.

Earlier this year, Strafe promised a re-envisioning of the Quake experience that marked 1996 as a milestone in FPS gaming. The anticipation of release was palpable, proving that there was a demand for more goodness in the vein of Quake. This is no small task. Quake, the first FPS entirely rendered in 3D (Terminator: Future Shock still had quite a few sprites), developed by id software the makers of Doom; dark gothic levels, dangerous enemies straight out of nightmares, an arsenal of very destructive weapons, a fast-paced gameplay. And yet, Strafe did not deliver. The disappointment seems to have tainted the annoucement of Dusk. All the anticipation that was there dissipated. Or maybe, the lack of an incredible marketing video did not manage to get the word out. Perhaps it is because when it comes to pixelated FPS games, there is just so much junk on Steam that it is hard to get excited anymore. And what a shame really, because Dusk does not disappoint and succeeds when Strafe failed.

The look and sound of the menu are immediately familiar to anyone having played the glorious golden age of the Doom-likes and Quake-likes. We are also greeted with a very ominous music. Then we launch the first level and… already under attack! Dusk wastes no time. And then, already a secret door around the corner, revealed by an upside-down texture! A hidden shotgun. A poor soul serves to test the weapon and gets blasted to blocky chunks of meat. This shotgun feels just right and is the best testament that we are back in 1996 for real. One last thing, though. What about the level design? 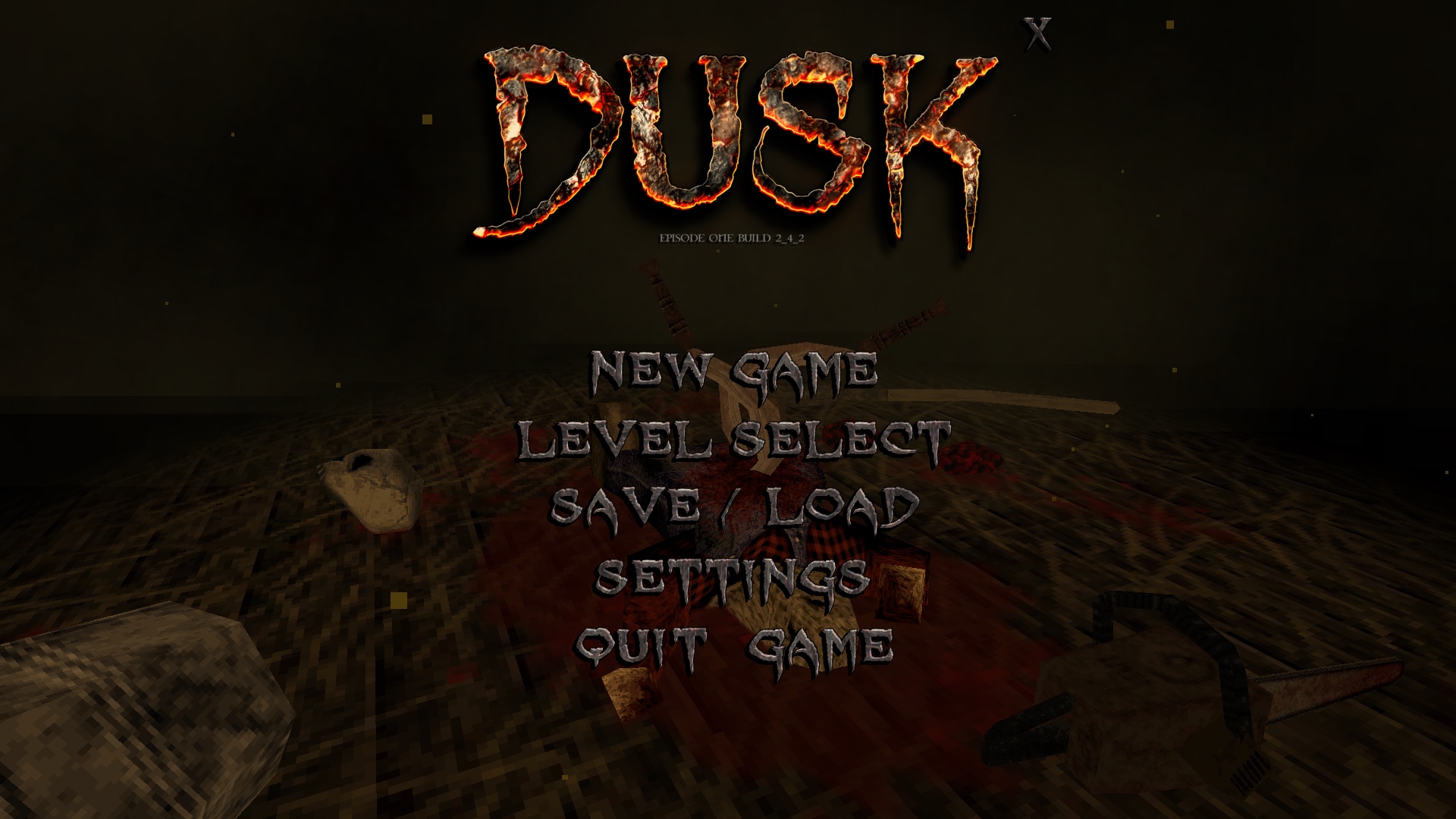 The areas in Quake were often self-contained, thankfully not the mazes that some people seem to fantasize about (Wolfenstein 3D had levels closer to a maze and it was not very thrilling). Dusk is not like that, probably closer to some semi-open levels in Doom 2. There is usually a large land with different buildings, and the player needs to find the keys to enter some of the doors. Once inside a building, there are actual rooms like a kitchen and a bathroom, the levels are not completely abstract as they sometimes were. It feels a bit like games from the build engine, and you can also have fun turning the tap on or off. Even better, there is a physics engine and you can carry boxes to reach higher places (don’t worry it’s not necessary, you can usually rocket jump) or throw a circular saw just like in Half-Life 2. What is especially interesting are all the subterranean locations. Basements leading to deep holes where evil is lurking… The atmosphere is fantastic, due to the nightmarish colors with dirty locations from which sanity has long gone. And the music… Really tense atmospheric music with lots of little sounds that keep you on your toes. 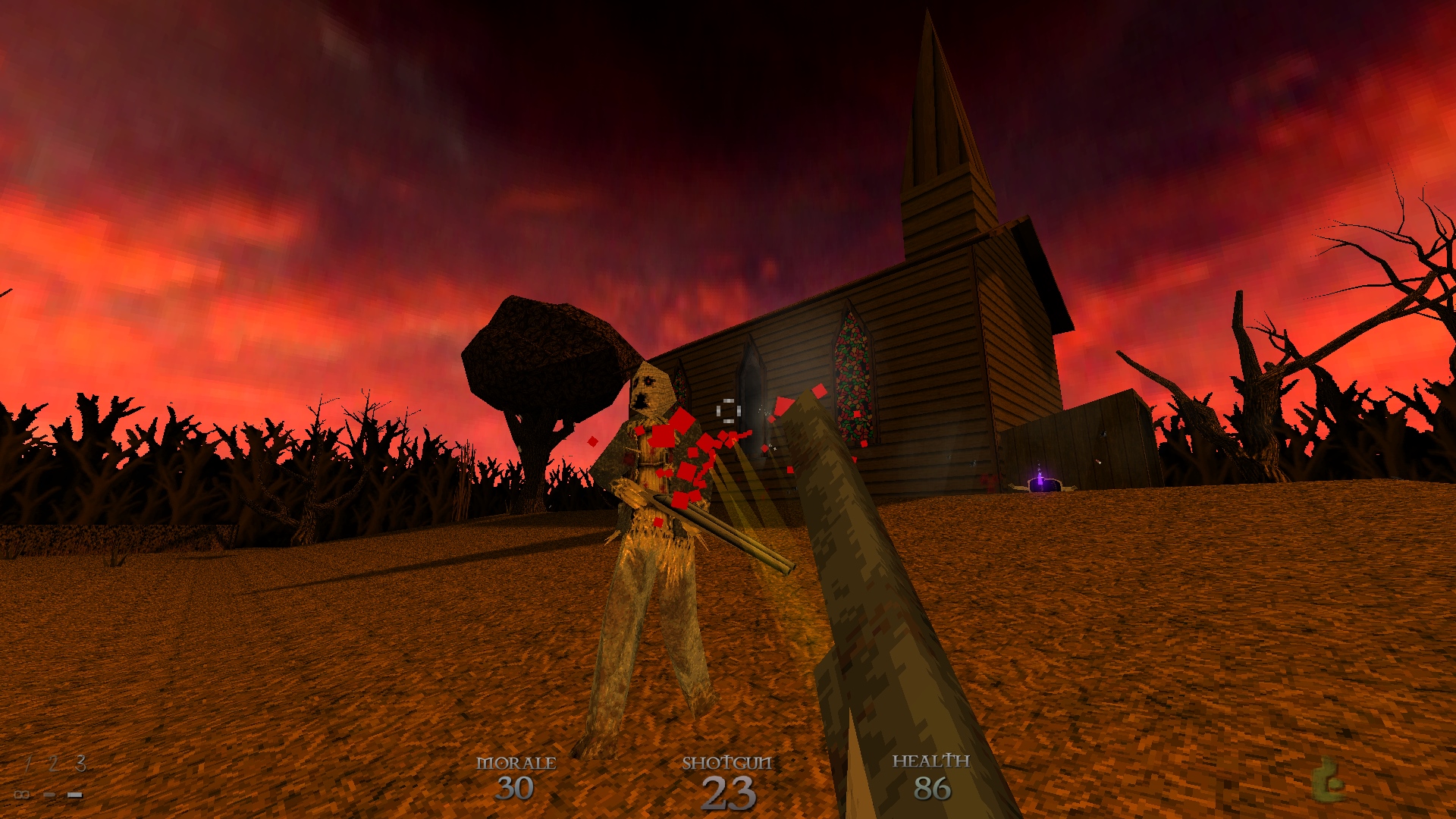 The enemies are good and yet also the weakest part of the game. There are several different types of cultists, but not enough monsters. Nothing truly fearsome like Quake’s Ogre that was deadly from a distance with its grenades and dangerous in melee combat with its chainsaw. Or Doom’s Mancubus that you had to dodge fast. Well, there are nasty beasties like the creepy scarecrows shooting cool shotgun pellets or these hellish hounds, but most enemies are dispatched the same way. Maybe some more aerial types would have added a layer of danger from the vertical point of view because I think it’s also what has been missing a little. This is a very slippery slope, as adding enemies with too much health takes away from the feeling of power gained from the weapons. But here and there, there really needs to be more moments when the player is feeling overwhelmed and has to run backward. Talking about running… The base movement speed is incredible. One of the fastest games out there, and it feels amazing! 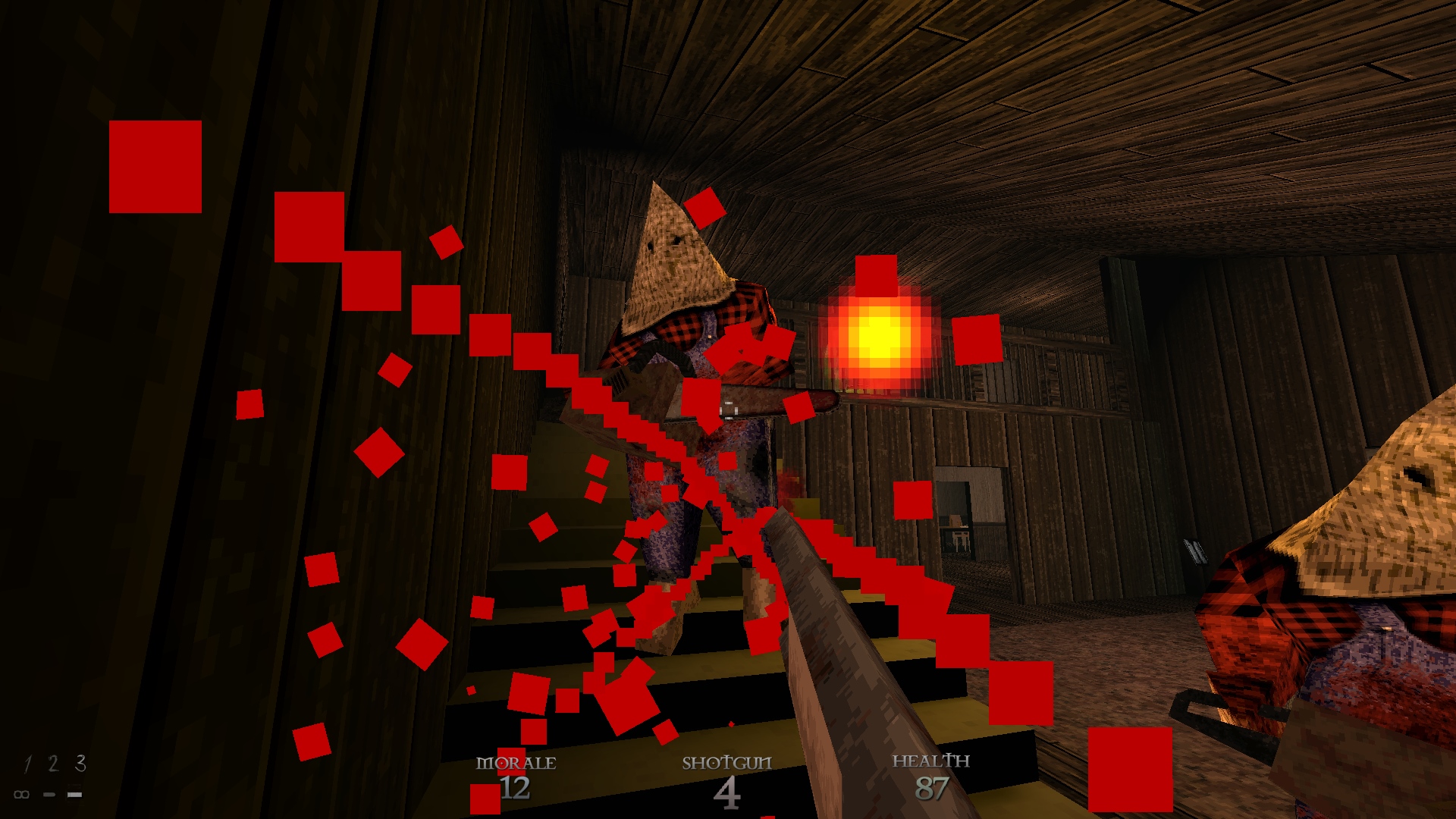 The tools of destruction

Concerning the weapons, I also have a few reserves. First, it is not possible to rebind the next weapon and previous weapon, they are “inverted” on the mouse-wheel. That’s not too big of a deal, what I was not too fond of was the design. Most weapons are really ugly and it’s sometimes difficult to tell some of them apart. Besides that, they feel great to use. The rocket launcher is top notch, the crossbow can shoot through walls, the rifle is a bit redundant with the crossbow but the weapon feedback is great, the super shotgun is absolutely perfect, the machine-gun is efficient to mow down a room very quickly, the grenade launcher is not super useful if the rocket launcher has been found but it works, the guns are not very good but can be useful to take down weaker enemies, and the akimbo pump shotguns are a joy to use. Those provide incredible utility against most common enemy types. 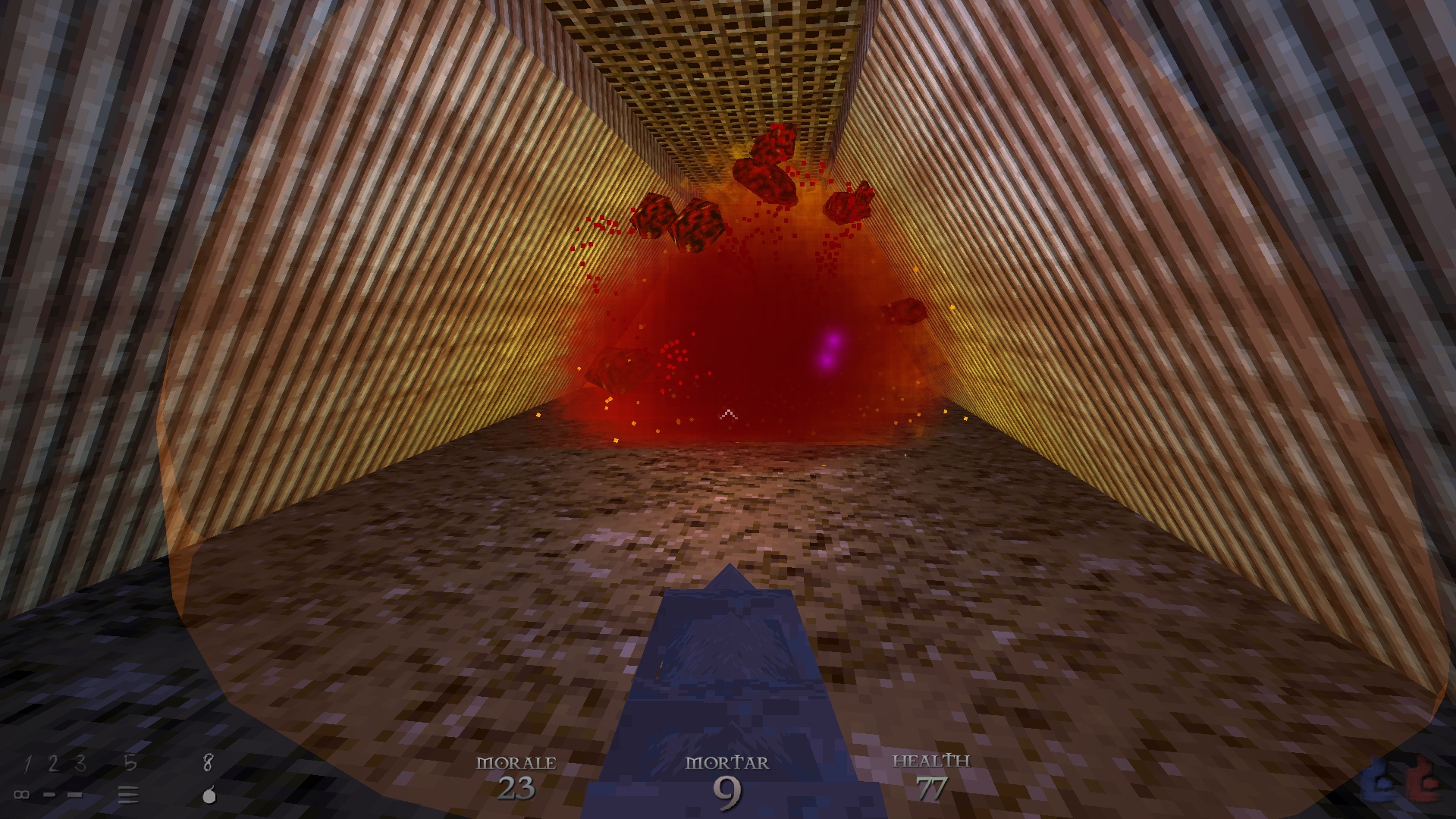 The game is great. Most of my criticism has been nitpicking really, the game works perfectly fine as it is. I will still add another small nit-pick. The main character should be characterized more. Whether through a portrait reacting to the shots, or a voice commenting the action rather than the occasional texts. In any case, had this game been released back in the day, it would have been hailed as one of the finest. Even crazier is knowing that this game has been made by one developer, David Szymanski. Ah, and the kick-ass soundtrack is made by Andrew Hulshult! What I have played so far is the first episode, with two more to come on Halloween. 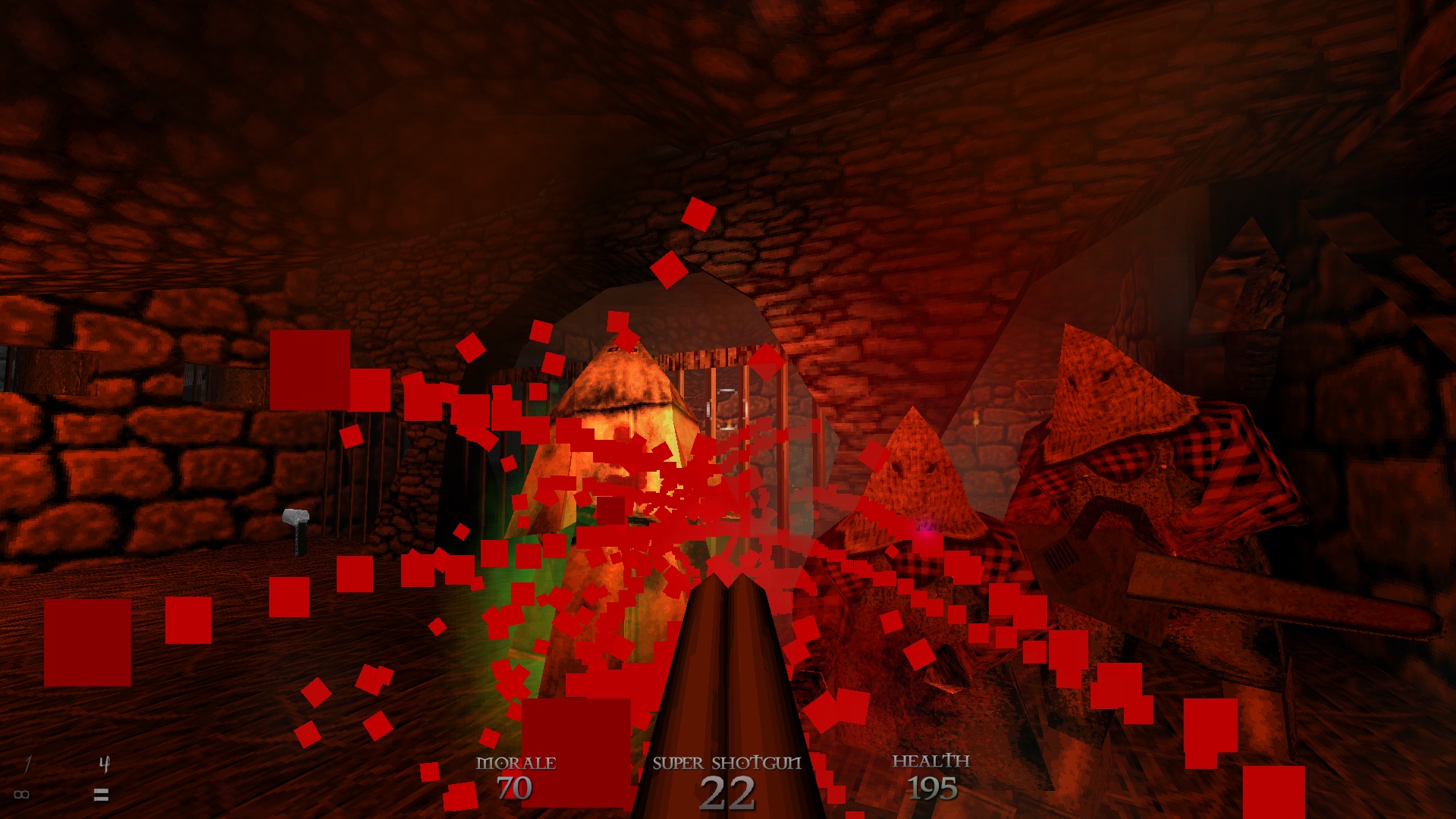 I had a great time with Dusk. If that game had been released 1997 under the name “Quake 2”, I would not have been shocked. Actually, I am not too fond of Quake 2 and had a better time with Dusk, which is closer to the roots of the first Quake. Among all the FPS games trying to emulate the good old times, Dusk is the best attempt I have seen (along with Gun Godz). And I am glad that Dusk had its own spin on level-design because the result feels unique. The places are interesting to explore, they provide open arenas as well as close quarter combat, and I really appreciate that they felt like real places that serve a functional purpose. Each level sets itself apart and it does not feel more of the same, which is more than can be said for a lot of these games. To top it off, the menu has everything anyone can desire, from a field of view slider to removing the camera sway. 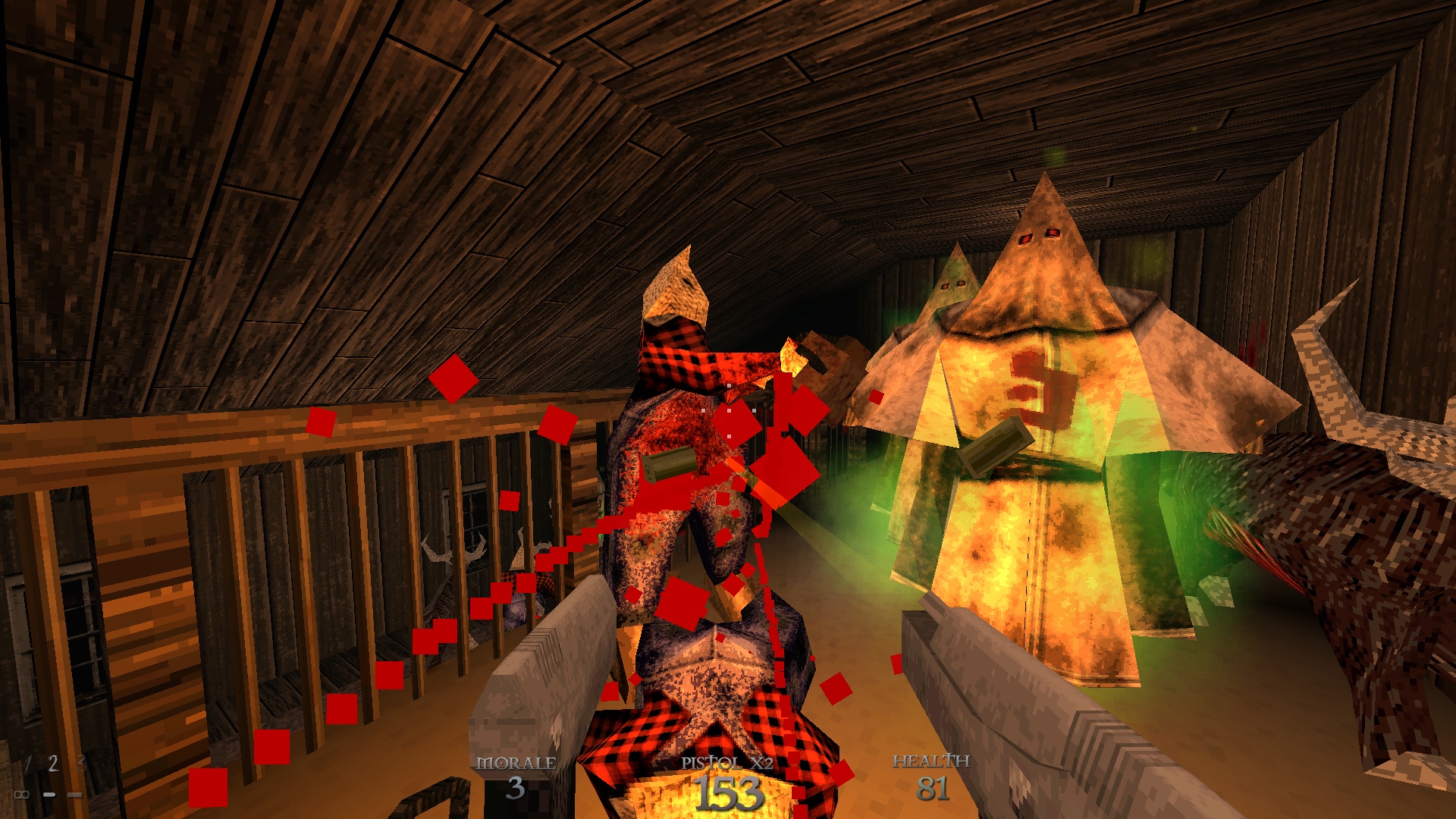 The weapons and movement speed are empowering, for once it’s no joke that we are back in 1996 playing an old-school shooter. Dusk not only manages to recapture the feeling of the good old Quake, it manages to be a great game in itself thanks to the combination of its atmosphere and semi-open level design. And the music… nice mix of creepy and heavy riffs. That first episode was a pleasure to navigate and blast my way through, and my only complaints are basically small nit-picks: the weapon models could look better, a few more dangerous enemy types would be welcome and the main character lacks characterization. Even if you have never played games like Quake, Dusk is accessible and easy to get into. Stellar work, I am looking forward to more of it.

Update: the final episode was released, here is our review.