Enlightenment is a new science-fiction rogue-like twin-stick shooter, currently in Early Access. So how does LizardKing’s debut title play so far?

Enlightenment is the debut title from developers, Lizardking.

Enlightenment is an isometric twin-stick shooter with a post-apocalyptic science-fiction setting. You play a nameless man who wakes in a structure outside the small town of Impact Point, just near a cave that allows access to the Ark, a multi-level bunker-like structure that was built to house the survivors of the apocalypse caused by an asteroid striking the Earth. All is not well in the Ark, though, and as you venture inside you find that its inhabitants have become crazed zombie-like beings intent only on death and destruction.

Readying your trusty pistol, you enter the first level of the Ark: the Ministry of Harvest.

Enlightenment’s graphics are a mix of old-skool isometric and modern lighting and special effects filters.

The game is played from a fixed isometric camera. Levels seem to range from dark to very dark, which is a bit of a shame as you can’t really see the textures and models in many cases, though they are mostly very well done. The fixed viewpoint also makes some rooms hard to navigate and enemies hard to see and target, as well as hiding collectibles and chests where you can’t see them properly. 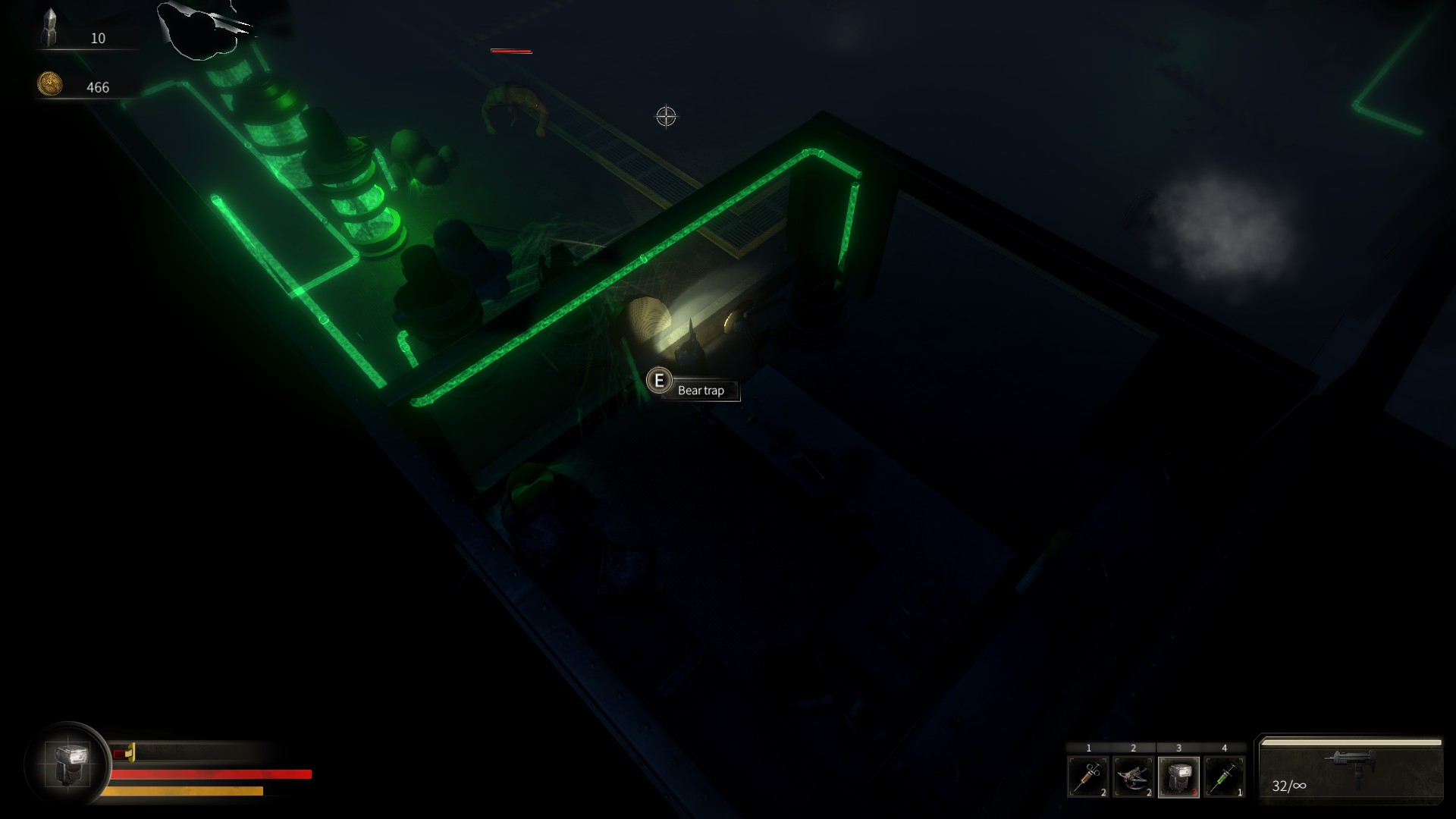 Each level has a consistent theme to it and the inanimate objects making up the level are modelled well. Dynamic lighting is very good and special effects are good while not being too overdone, though the drunk filter might be a bit much after just one beer!

Character and enemy graphics are acceptable, but generally not as well made as the environmental models. Character models and animations look a bit dated and wooden. 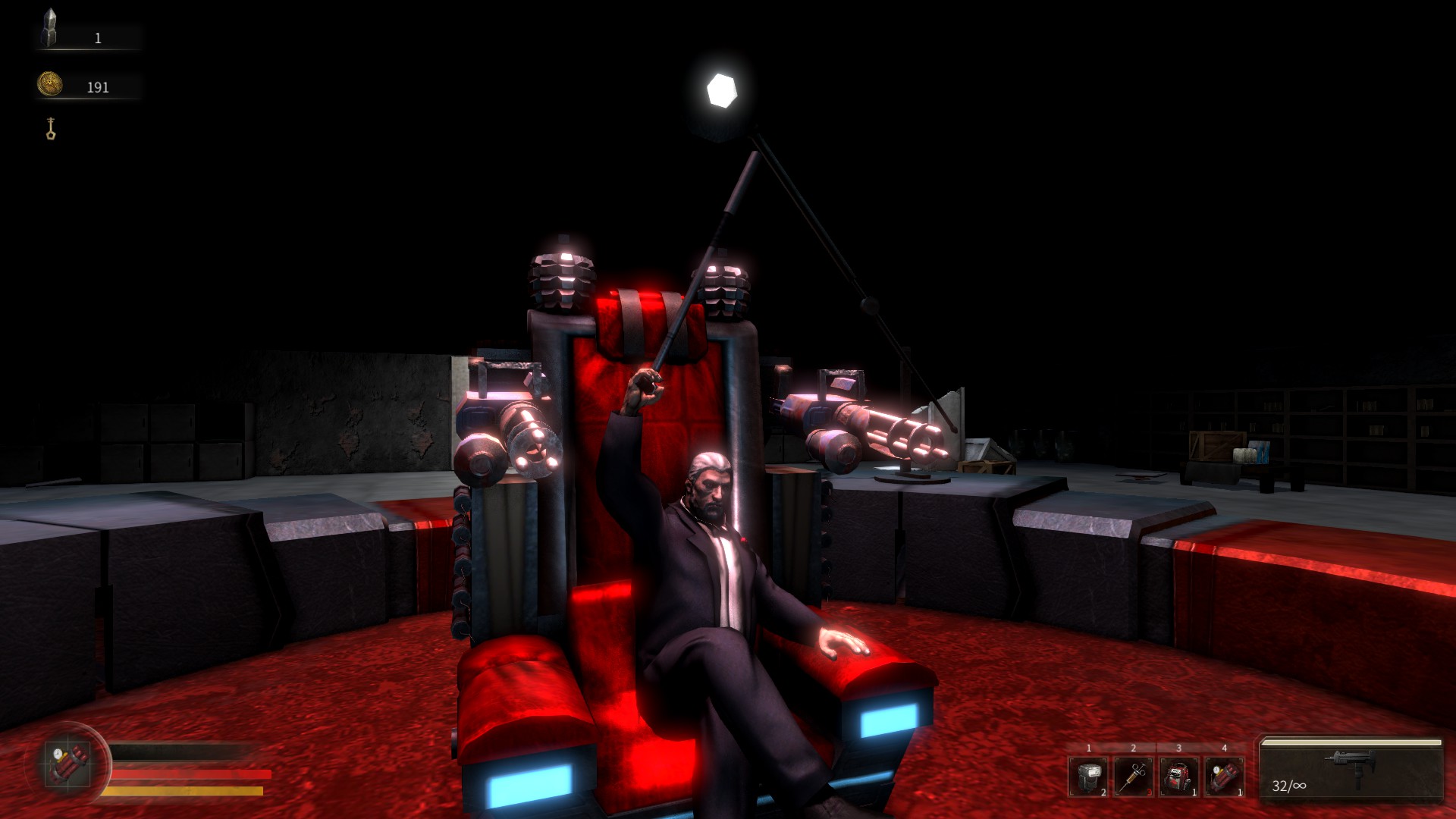 I’ve encountered some invisible walls that detract from the experience, and some sort of reactive cursor when over an enemy would be useful, to indicate that you’re on target.

There are no graphics options to speak of and performance does sometimes drop; I’ve noticed slight pauses when approaching doors while enemies spawn in the rooms beyond.

There’s a slow musical score that still fits the game quite well. The title track has some slow bass and heavy electric guitar solos, together with something that sounds like horns; it may have a Vangelis / Blade Runner influence. The in-game soundtrack is mostly quiet enough as to be non-existent since the combat sounds (melee especially) are so loud. The mid-level shop music is a welcome interlude.

Weapon and explosion sounds are pretty good, though volume normalisation is not. There’s only a single volume control, so you can’t vary the music volume separate to the sound effects.

I’ve encountered a bug, too, where sounds occasionally get ‘stuck’ repeating themselves for a few seconds. This tends to correlate with game slowdown, so the two are probably related. 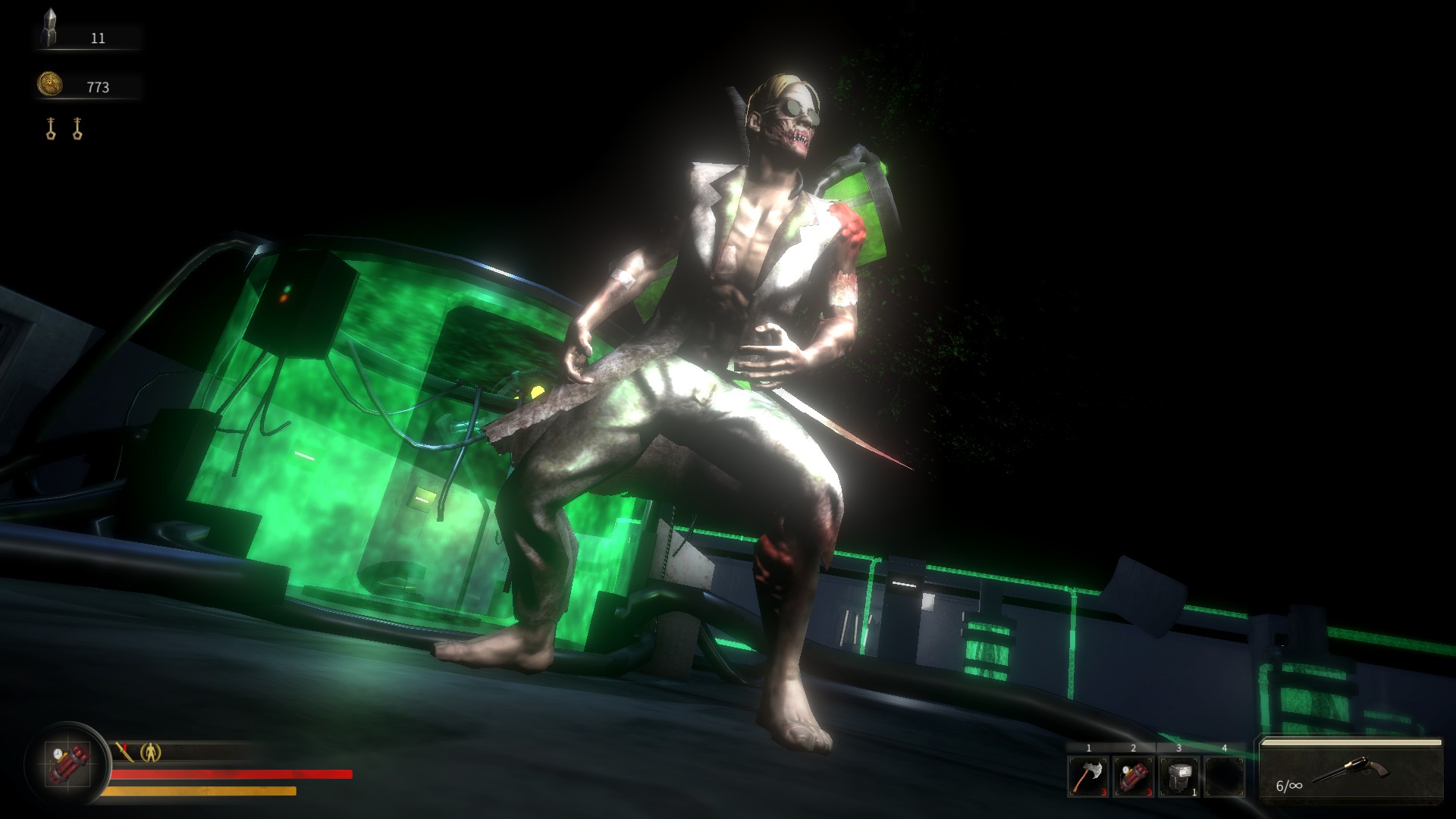 Enlightenment plays like any other game in the genre: move with your left hand (WASD / left stick) and aim and shoot with your right (mouse / right stick). Your character also has four inventory slots, each with a stack of up to three of each item, including random injections, ballistae, bombs, stun grenades, and more. These are selected with 1-4 and used with the right mouse button. Your character can also hold two weapons — one big and one small — each with its own ammunition supply; swapping between them in the heat of battle is quick and easy. The game apparently has controller support, but I always appreciate the precision of mouse aiming in twin-stick shooters anyway.

The game begins with a simple tutorial level to introduce the basic concepts, and you’ll quickly discover one of the games current big flaws: the translation is awful and a lot of the ‘English’ doesn’t make much sense. You’ll probably even see some as-yet-untranslated Chinese on occasion. It’s a shame, too, because the setting appears to be quite interesting, from what I can make out from loading screens and in-game text. It has a good feel to it, reminiscent of Bioshock and Fallout. 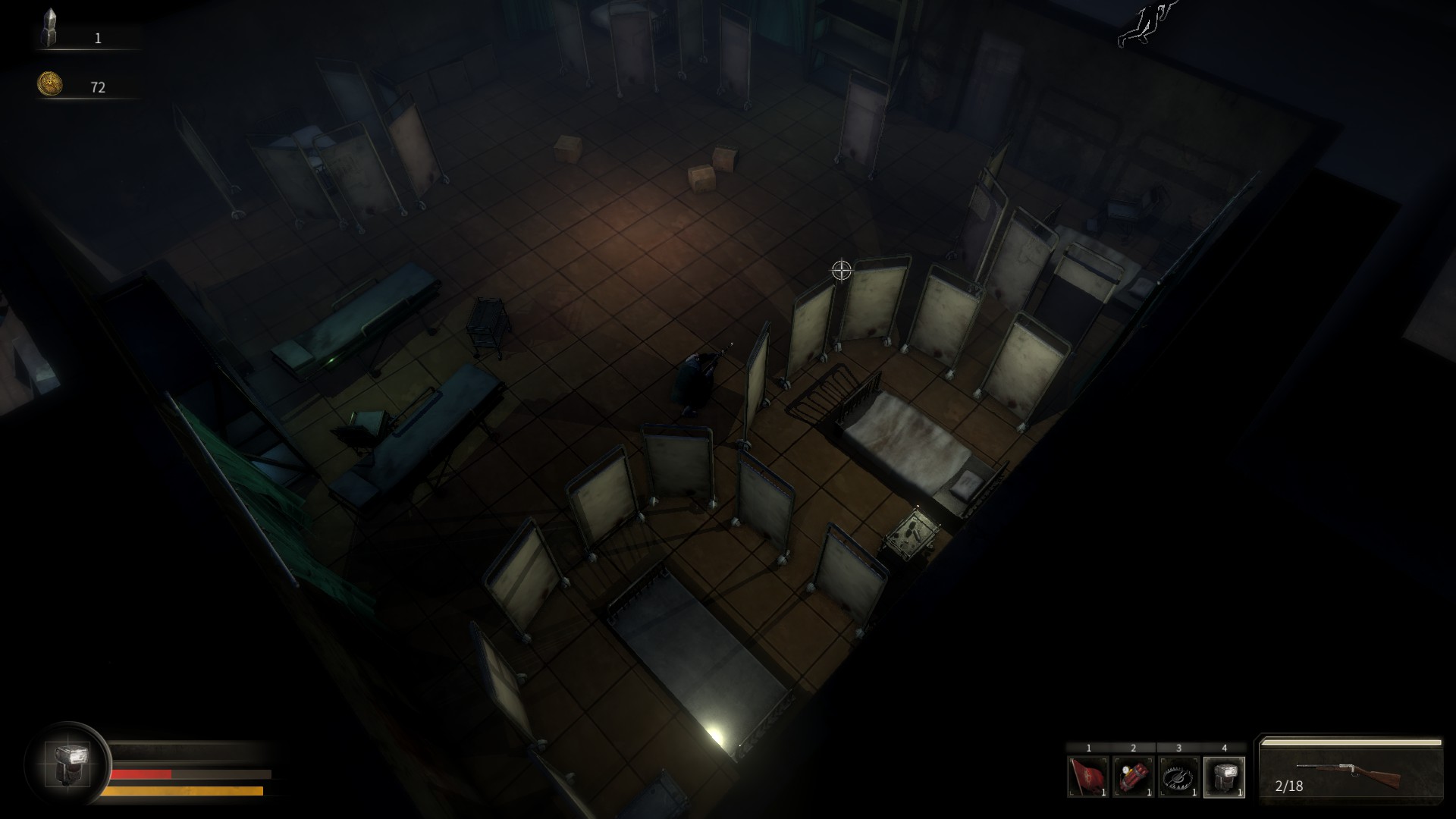 After that you find yourself in the all-but-deserted ‘town’ of Impact Point, and from there, the cave-like entrance to the great underground Ark. The game proper begins when you enter the Ark and find yourself at the Ministry of Harvest. Here you can pick from three random weapons — if you’re really unlucky they’ll be the same crappy weapon three times! — and enter into the warren-like hallways and rooms of the Ministry. Make your way to the end and kill the boss and it’s on to level two: the Ministry of Evolution. After that … well, that’s it at the moment.

The two levels each have a very different look and feel, with different enemy types in each. All up, though, there are only about a dozen enemy types, with a handful of different attack styles. So you’ll see basically all the game has to throw at you in a couple of hours play. There’s a minimap (not documented: press TAB) that’s very useful and should be in every rogue-like twin-stick shooter. 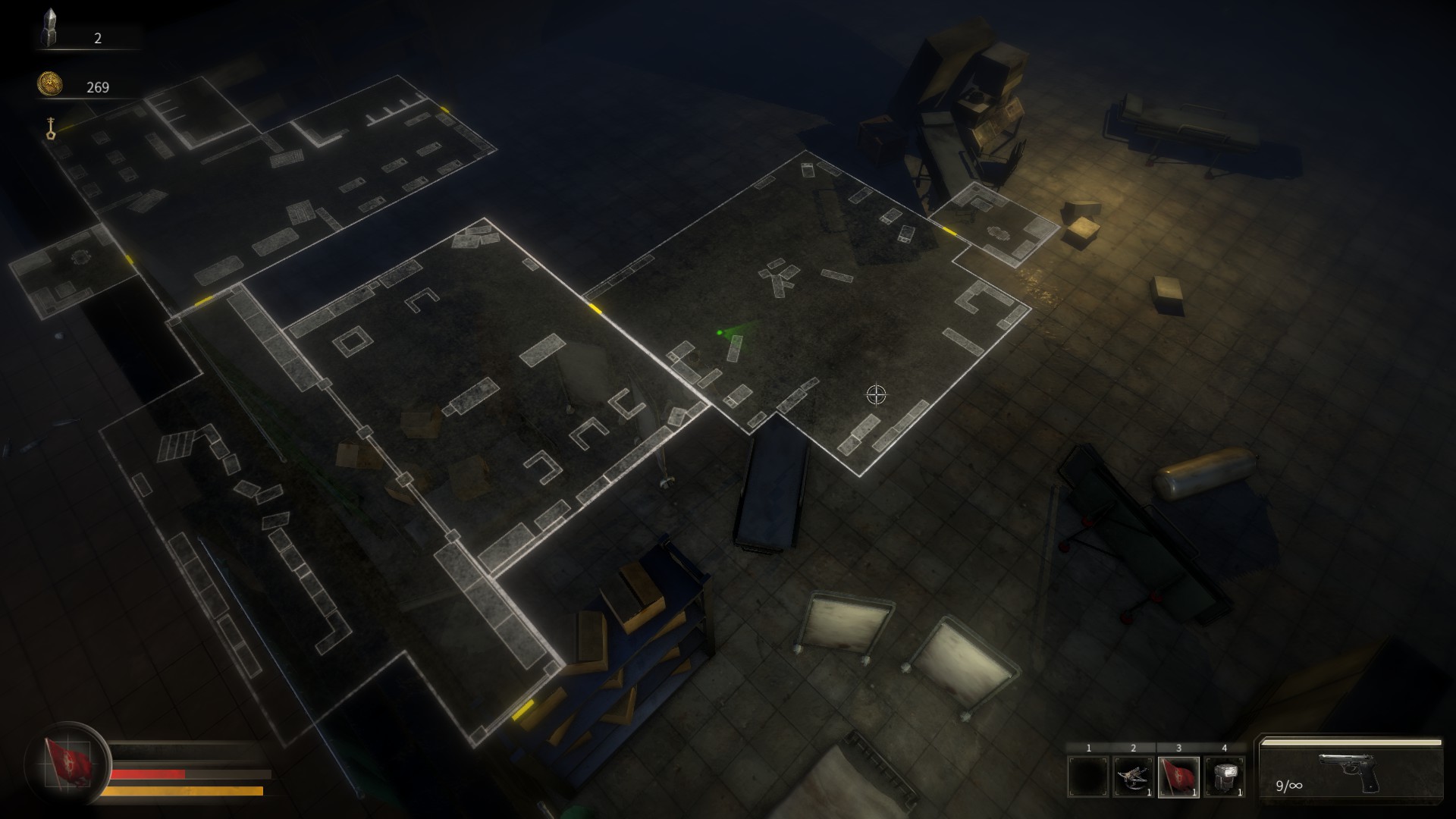 Longevity is increased with procedural generation of levels, so the game isn’t quite the same each time you play. But with only two stages and few enemy types, there’s really not that much variation even then. There’s also not a lot of cool loot to find; though there are a number of weapons and one-use items, they’re not that well balanced, and you’ll quickly find which few are the most worthwhile. 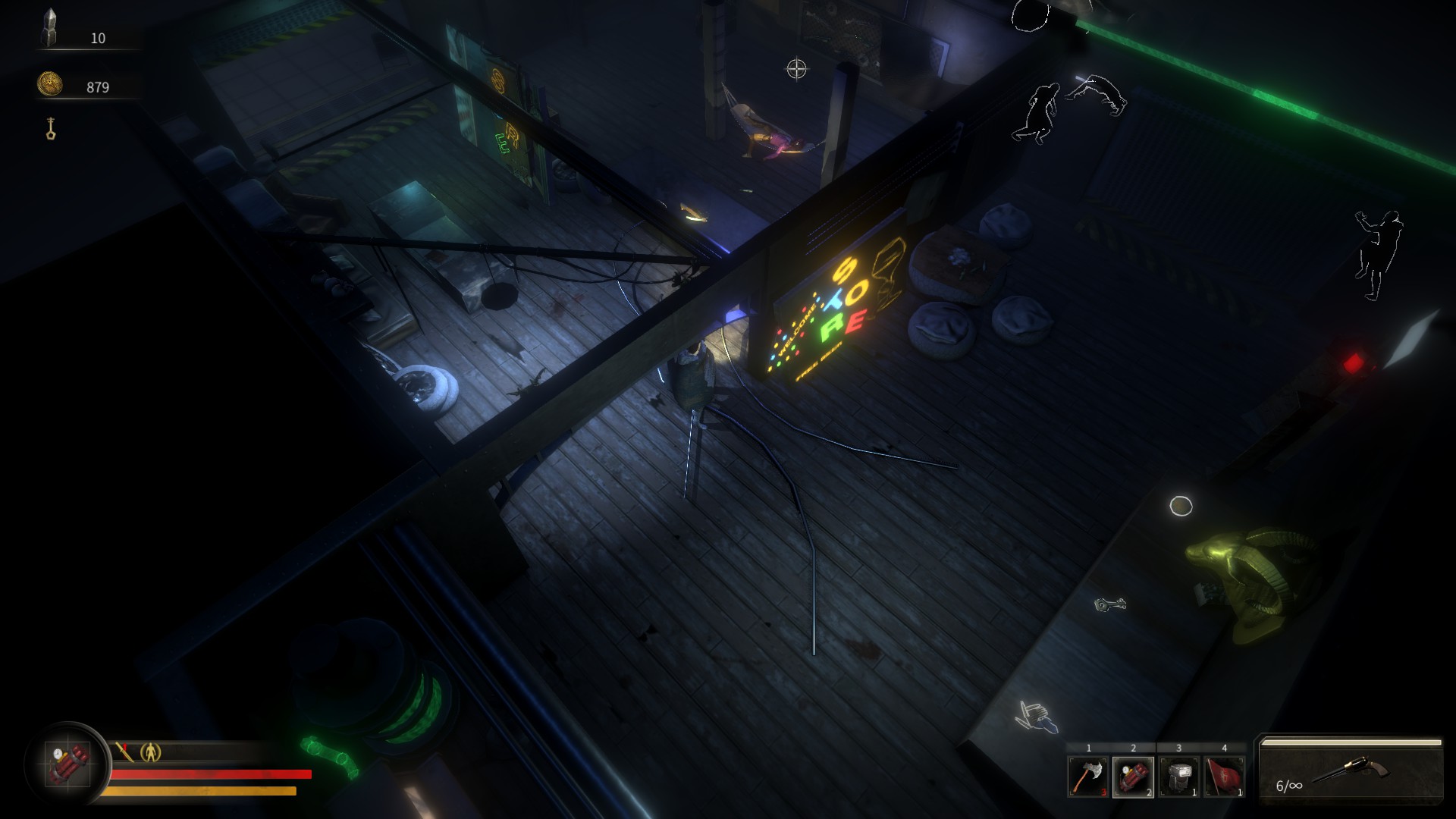 The game introduces the concept of “Ragtime rank”, which you gain through playing the game. When you die you’re awarded a score based on a hidden calculation that has something to do with kills and exploration. If you score enough to gain the next rank then you might gain bonus Illumilet crystals: a sort of permanent currency that you collect across multiple play throughs. The first few ranks you also unlock shop-type characters in Impact Point, from which you can unlock new weapons, gamble for item unlocks and other bonuses, and purchase ‘mojos’ — special passive abilities for your next play — on credit. This part is quite creative and well done, but there’s so much randomness involved that you have to be rather lucky to end up with a good combination of abilities and weapons on a single play. 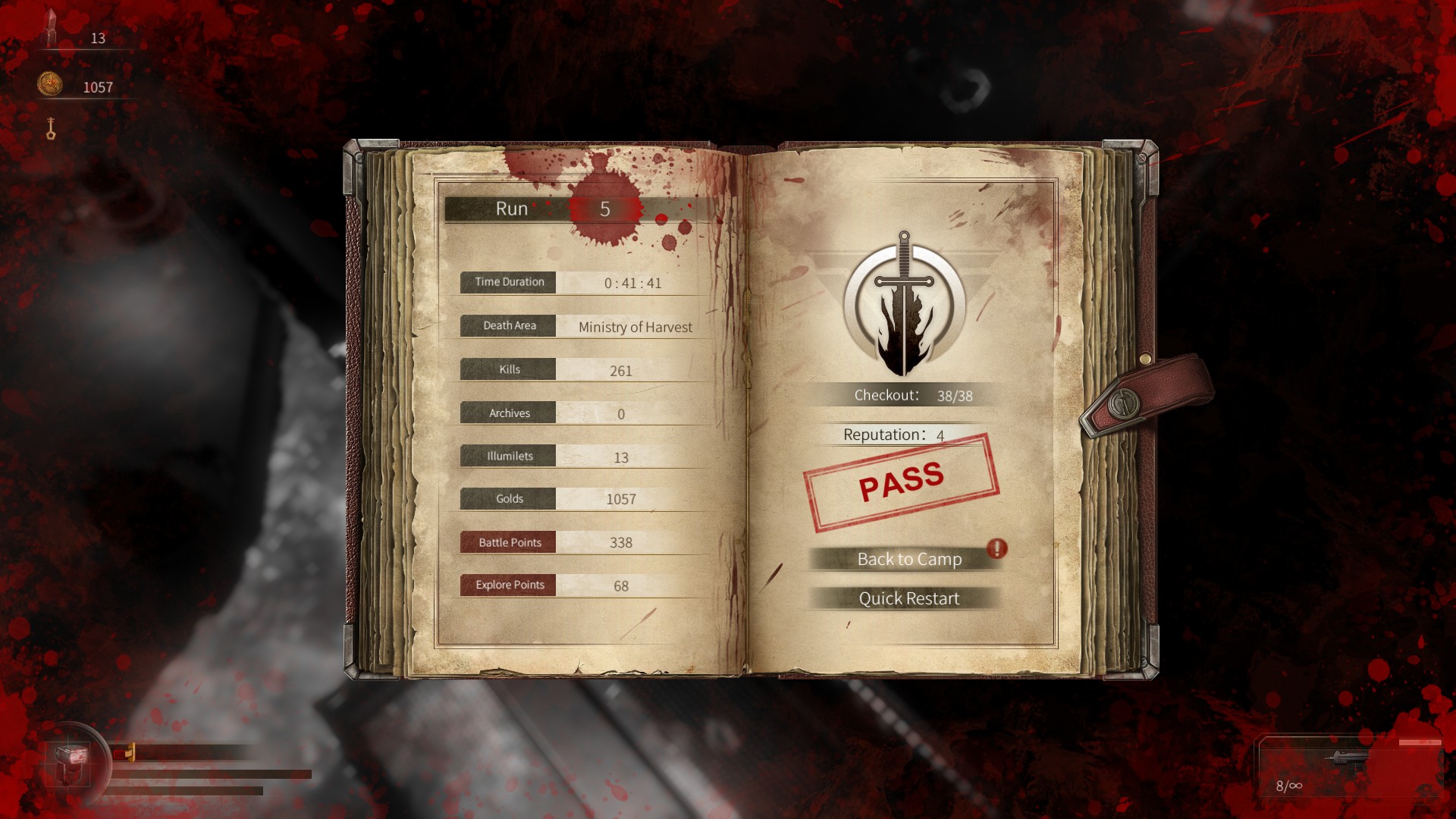 Enlightenment is a solid twin-stick shooter in the making, but definitely needs more work. There are absolutely no character customisations or choices, and no real progression beyond unlocking new items, weapons, and mojos to add them to the pool that’s randomly selected each time you play. The game has a great feel to it, but with only two levels and such a small cast of enemies, there’s not that much to actually do. The stamina mechanic doesn’t really add anything to the game and once again I find myself wondering why the developers bothered to implement a melee attack in a twin-stick shooter; I always find them pointless.

The game is fairly stable, though. I found a few issues with performance and the obvious language problems, but I haven’t hit any game-breaking bugs. 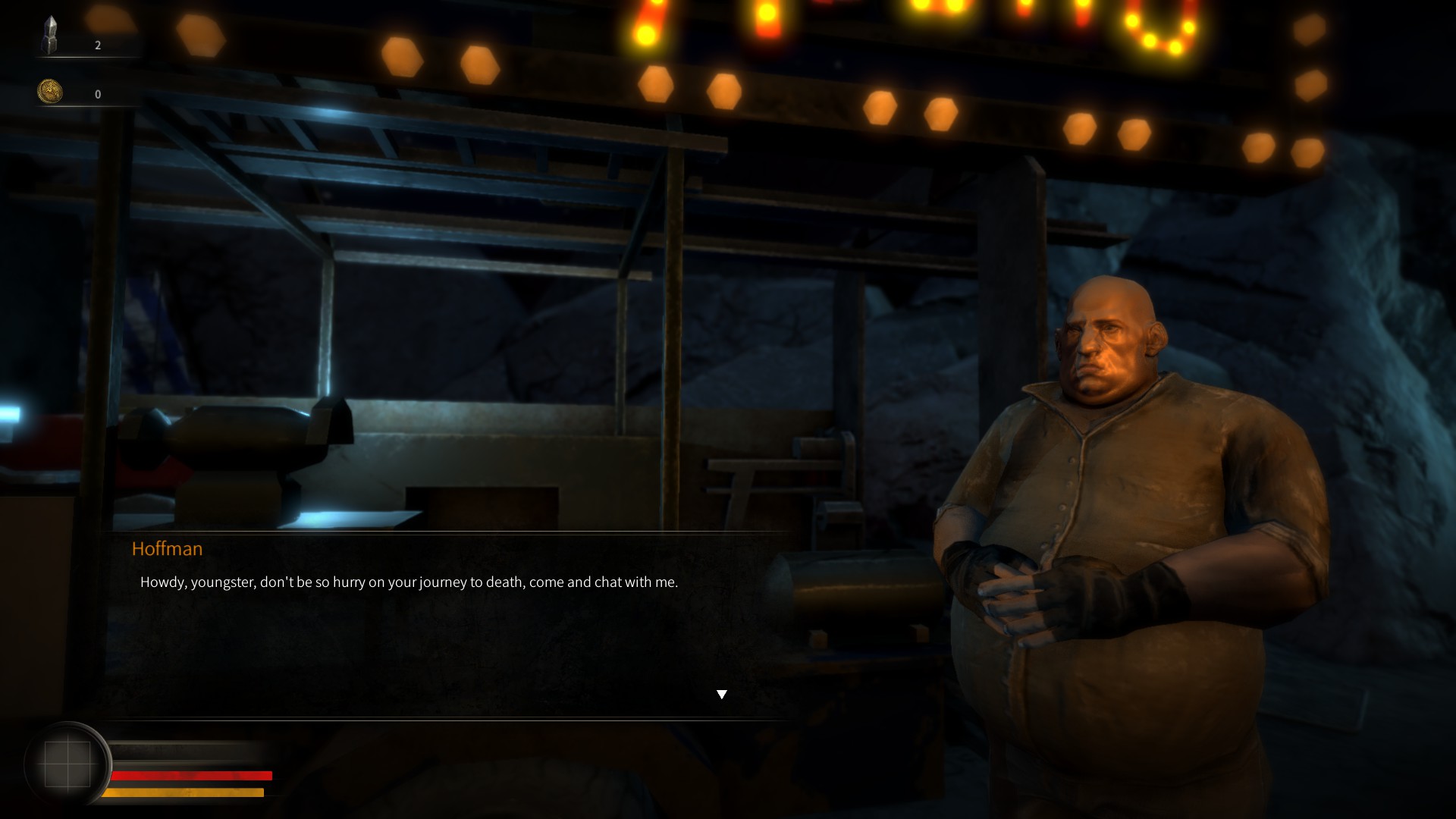 Enlightenment has the makings of a solid twin-stick shooter. The fixed isometric camera is frustrating, the translation is terrible and incomplete, and the game has a number of other rough edges that make it look rather amateurish. But underneath all of that it’s great fun! If the devs manage to address the flaws, get a reasonable translation, and, most importantly, add a lot more content, Enlightenment could be a very good game by the time it leaves Early Access. 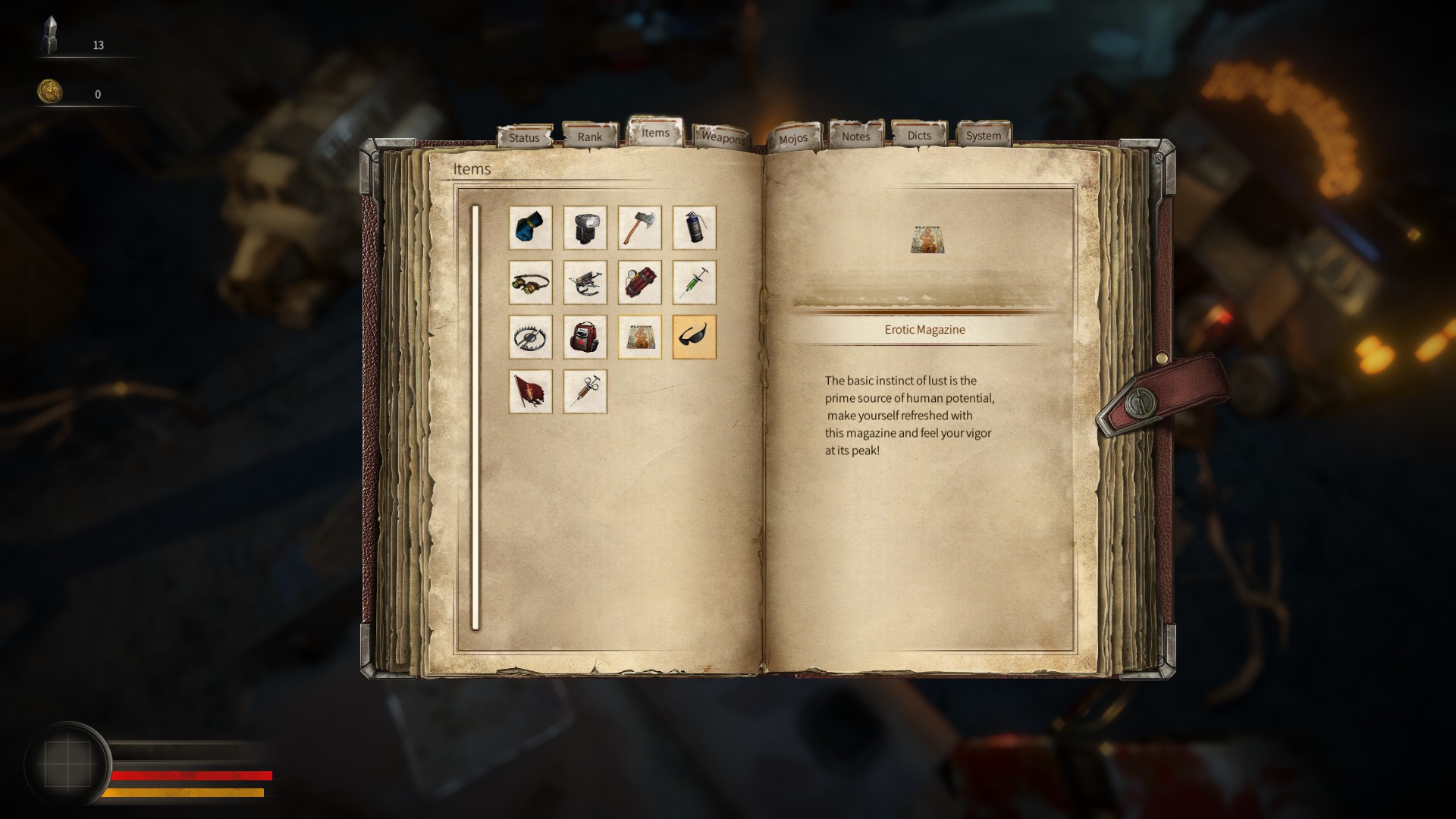