You will have to find a way past all the hordes of mutated people and creatures and make it back alive. The premises sound simple, but this game has surprising variety and content, as you will soon read about.

Solstice Chronicles: MIA is a top down shooter set in a future where mega-corporations have gained a great deal of power. Your role is to impersonate one of the numerous grunts these corporations have on their payroll. Left abandoned in a facility after a terrible plague, you will have to find a way past all the hordes of mutated people and creatures and make it back alive. The premises sound simple, but this game has a surprising amount of variety and content, as you will soon read about.

General Gameplay
The gameplay of Solstice Chronicles: MIA is the typical style expected from a top-down shooter, and seems to be inspired by some all-time classics of the genre such as Alien Shooter and Alien Swarm. This is at the core of the game, but the developers have also tried to introduce new mechanics and innovations to keep the formula fresh. These mechanics, for example, consist of passive and active abilities to unlock as you progress through the levels, a useful companion drone which has four unique skills, a Threat Level that manages both the spawn rate and strength of enemies in levels along with an option modify them by using certain skills, Stamina management, and lastly a supply points management. All these new non-classic mechanics help this game to be up-to-date with 2017 standards. Basically, you will be running through endlessly spawning enemies from every side, completing different objectives and reaching the end of the level alive. You will have three lives on each level, and if you are shot down you will be able to resurrect, but each time with less HP. Health regens over-time or with a medkit and there are four classes, each with its own skill tree and abilities.

Combat System
The combat is fast-paced, full of gore, meaty, and substantial. Great hordes of enemies will swarm you, and beasts range from small and fast to huge and dangerous. There are, however, some helping features to aid you in your battle. First is the target selector, a consumable that can be used with almost any weapon.  It will allow you to aim automatically and score critical hits until you run out of battery, which won’t take long. Then there is your drone, which has four skills: Scout, Bomb, Block and Taunt.  Each has a different use and is powerful in its own way. For example, Bomb deploys a field that damages all enemies when triggered, but the bigger it gets the less damage it does, so it’s up to you to decide the right moment. Another one is Taunt, where all enemies are prompted in the level at that time to chase you, useful to set up ambushes. There is quite a tactical component to combat especially at higher difficulties. Enemies will be dangerous and won’t forgive many mistakes.

Content
The campaign has a substantial amount of levels, and also Survival endless mode is present. If you want to play the whole campaign with all the four classes, it will take you quite some time. As far as weapons, skills, and equipment go, there is a plethora of these in this game, between standard ones, special ones, class skills, general skills, consumables and more. As for local co-op, it is a shame it’s not online, a real shame. Supporting two players, you will have a lot on your hands for this price range, just not online.

Balancing
At higher difficulties, the enemy will definitely have the upper hand unless you have a good strategy and stamina management.  A few mistakes will be fatal and using skills and drone powers correctly is a must. Generally, the game is difficult as it should be at maximum difficulty, but is also fair enough. Some weapons are a bit OP like the flamer which has infinite ammo and can shoot through WALLS (!) but generally we are on good levels as far as balance is concerned.

Challenge
On the highest difficulty, the game is really tough if you are fond of that kind of thing.  I don’t know about MERC difficulty, which possibly is unlocked only after completing the game. I suppose it’s even tougher at that point. 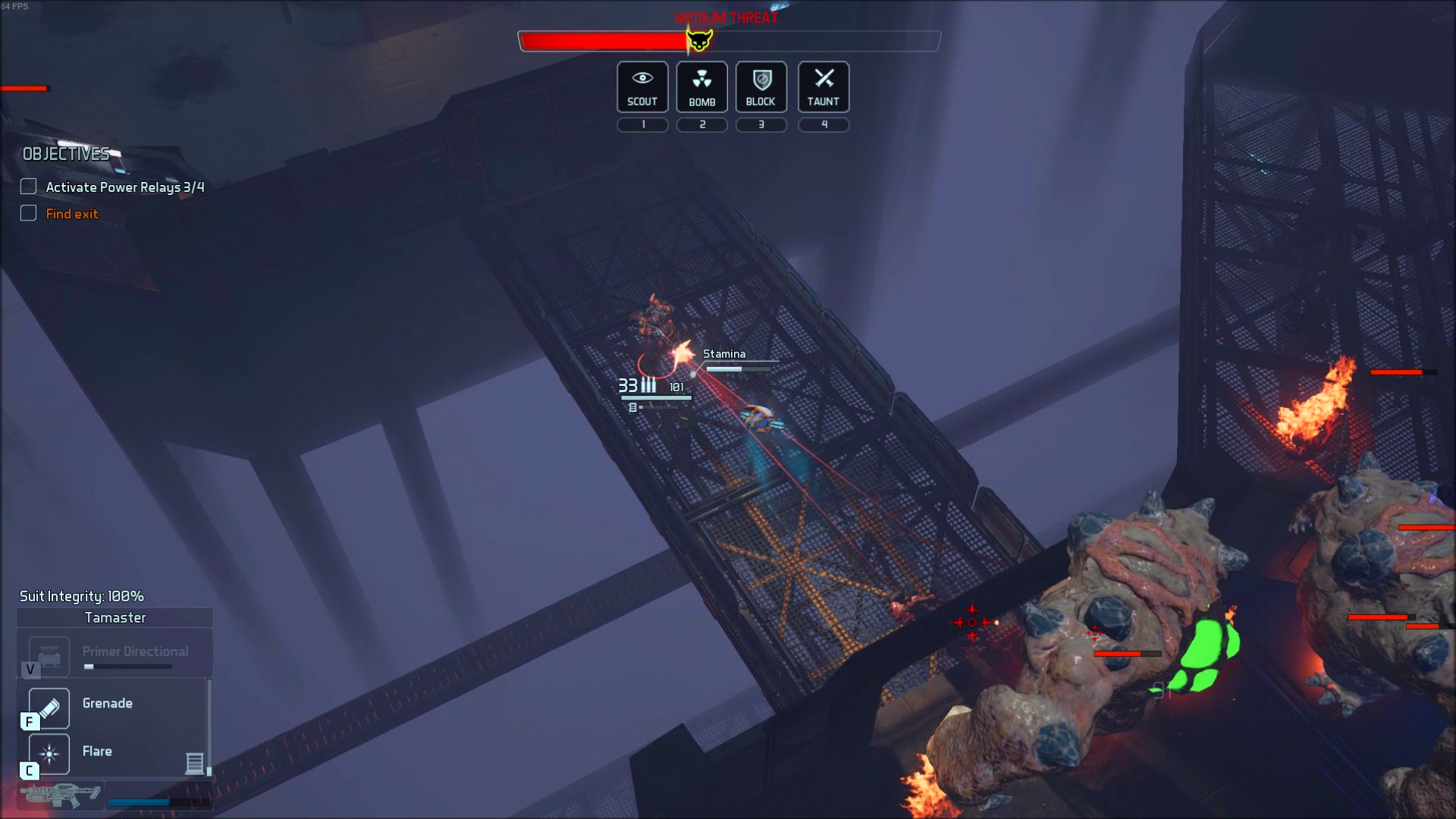 Graphics
Solstice runs on the Unreal Engine 4, but looks like 3. The graphics are decent but feel a bit dated in some areas such as with the textures and effects. It’s not exactly top notch in those areas, even if the artwork and lighting are good. Generally, the graphics do the job but are only decent, not more than that. Models and meshes are detailed enough, though cutscenes highlight all the lack of detail that is a consequence of using an engine that is ten years old.

Sound
I found the sound effects and soundtrack to be fitting as they do the job, but nothing really stands out. On that note, nothing is bad either.

Performance
Even with high-end hardware, in some cases, drops of 15-20 fps have been registered with no reason, though not often. Optimization problems are there but do not affect the game very seriously.

Stability
No crashes or errors found.

AI
Basic follow-and-attack enemy AI, nothing more or less, typical of this kind of games, no special mentions to be done.

Game Quality
The controls and UIs do the job, both with mouse/keyboard and gamepad the game controls are responsive and well made, key rebind is possible too.

Bugs / Issues
Apart from the flamer being able to shoot through walls, I didn’t notice any other bugs worth mentioning. 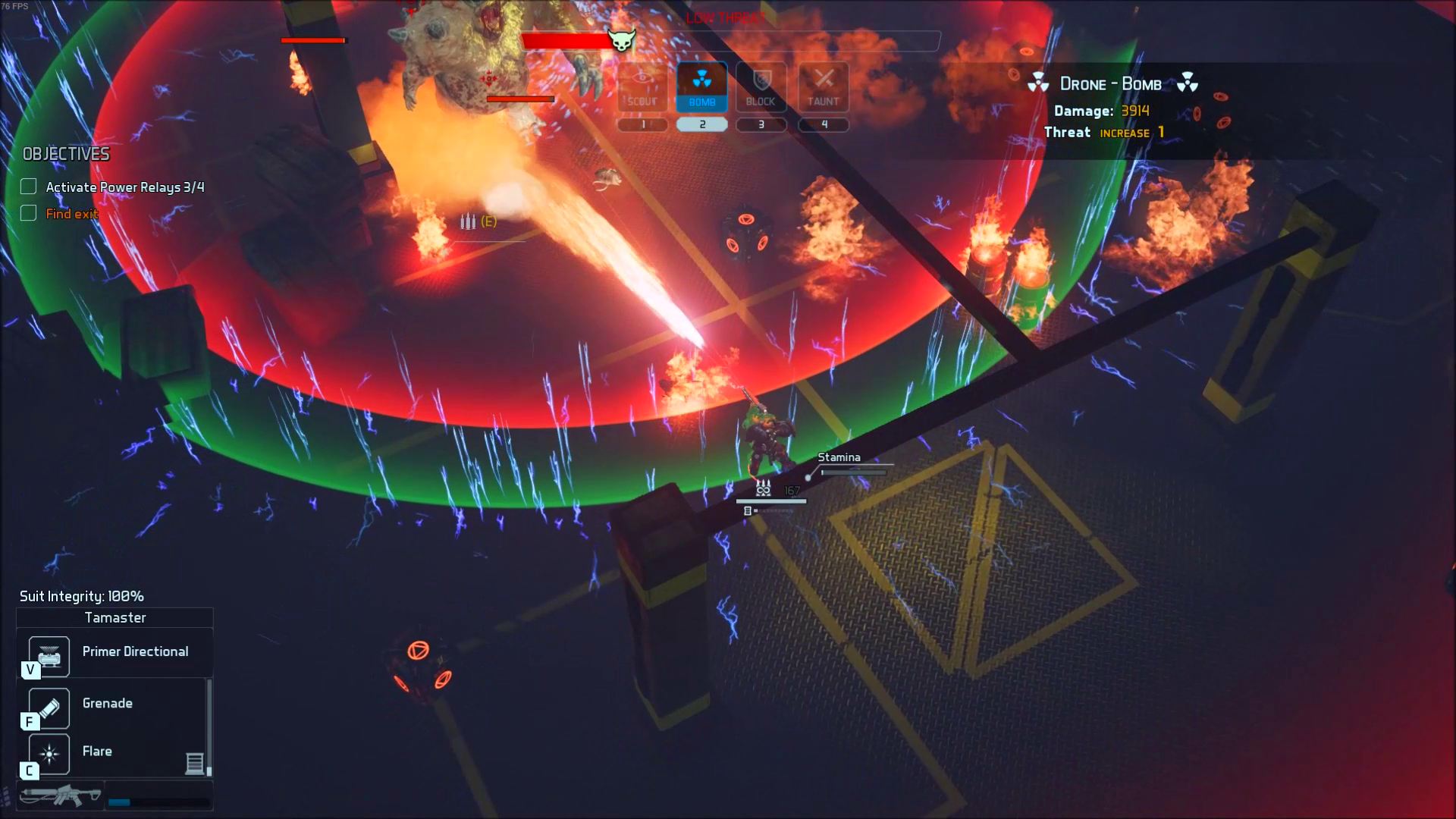 Solstice Chronicles: MIA is a decent top down survival shooter with some new mechanics that keep it fresh and up to date with the times. Still, the lack of online co-op along with performance problems and using a dated engine bring this title down quite a bit. I suggest purchasing if you want a good shooter to play on your own or maybe some family member in split screen, for this price range it’s not too bad.