StellarHub puts you in control of a new space station. Collect resources, build modules, conduct research, and manage your staff, but watch out for asteroids and pirates keen to steal your hard-earned profit.

StellarHub is a space station building and management game from indie developers, Casualogic.

In StellarHub, your role is to manage the construction and maintenance of a space station. Starting with a single hub module and a group of eager people, your job is to develop and grow the station, attracting trade and tourists, and defending against pirates and wandering asteroids.

StellarHub’s graphics are really rather good.

Each level displays your station, made up of different ‘plus-shaped’ modules joined together in a grid layout. There are two modes of display for your station: interior and exterior mode. Interior mode is where you’ll play most of the game. This shows each of your station inhabitants wandering around performing their daily tasks, and allows you to interact with them. Exterior mode is used for monitoring approaching trade or pirate ships, as well as asteroids that impinge upon station space. 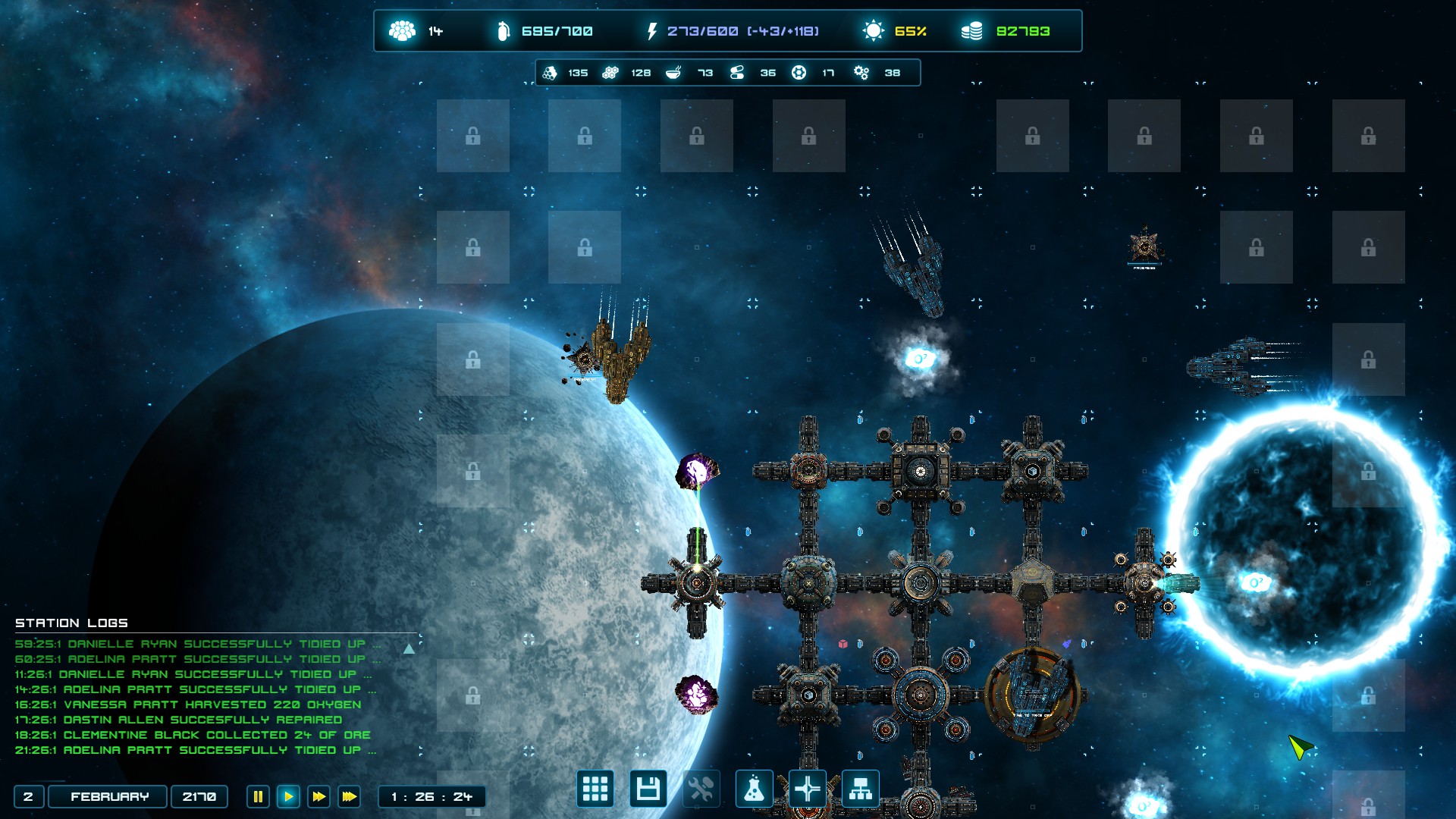 Characters are small, but have a number of animations. Each profession wears a different colour jumpsuit, providing reuse of graphics resources while allowing for relatively quick differentiation between characters. Most of the modules look fairly bland in internal mode. External mode looks a little better, with good attention to detail in each component, but the grid layout of the station does look a bit weird and somewhat unnatural.

The whole lot is rendered in front of a number of lovely animated backgrounds, each showing the planet about which your station presumably orbits as well as the star system’s primary star. These look very nice, indeed, with one of them being used in the beautiful title screen. 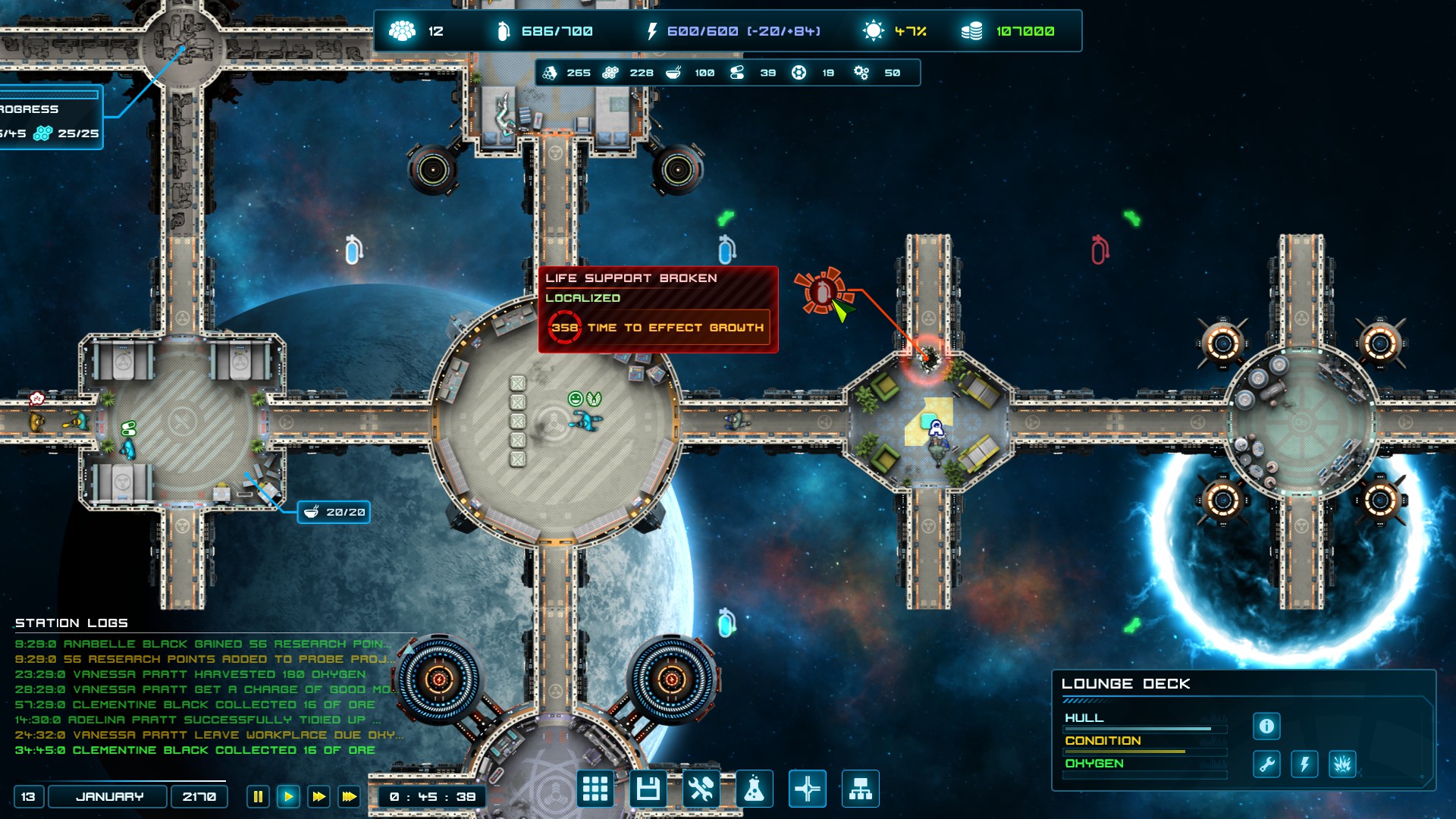 The interface is very clean and easy to use, with tooltips for almost everything, making the components that lack them stand out. There are no graphics options beyond full screen/windowed selection and resolution. I haven’t experienced any slowdowns.

StellarHub’s soundtrack is lovely. There are only a few different trucks, in a nice ambient electronic style with haunting light melodies and slow beats. It’s like a good chill-out album.

Sound effects are mostly good, too. Interface sounds are responsive and well synchronised, with electronic bleeps and bloops appropriate to the setting. The “pewpewpew” lasers are good, and the explosions and warning klaxons are suitably loud and sudden enough to jolt you out of the casual, meditative state that the rest of the game can invoke.

There are no voices, but there are occasional groaning sounds. 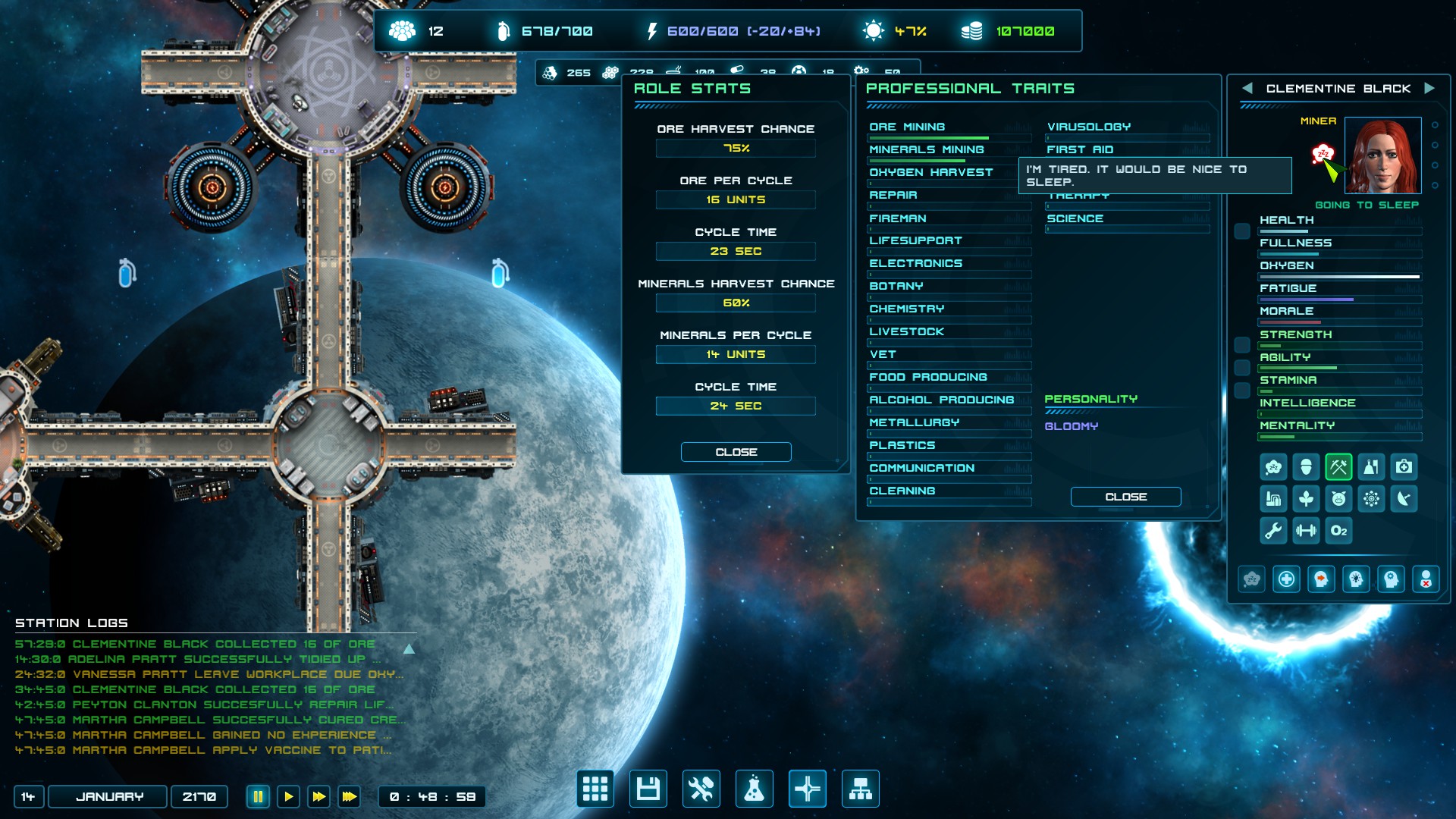 At its heart, StellarHub is a relatively simple city builder in space station format. Your station is made up of modules connected in a grid layout. Each module requires a certain amount of metal and plastic to construct and consumes a certain amount of power on an ongoing basis. You can only place modules if they are connected to the existing structure, maintaining the X/Y grid.

When you begin a level you have access to the basic module types, which is more than enough to keep you busy for a while. One of these modules is a research module, which unlocks the use of the scientist profession. Assign someone to the research module and you can select items from the technology tree to research, further unlocking new module types and upgrades for your existing modules, as well as further items to research in each branch. Initially the research available seems quite varied, but your researchers are fairly efficient, so you’ll find yourself progressing quickly through what’s available. 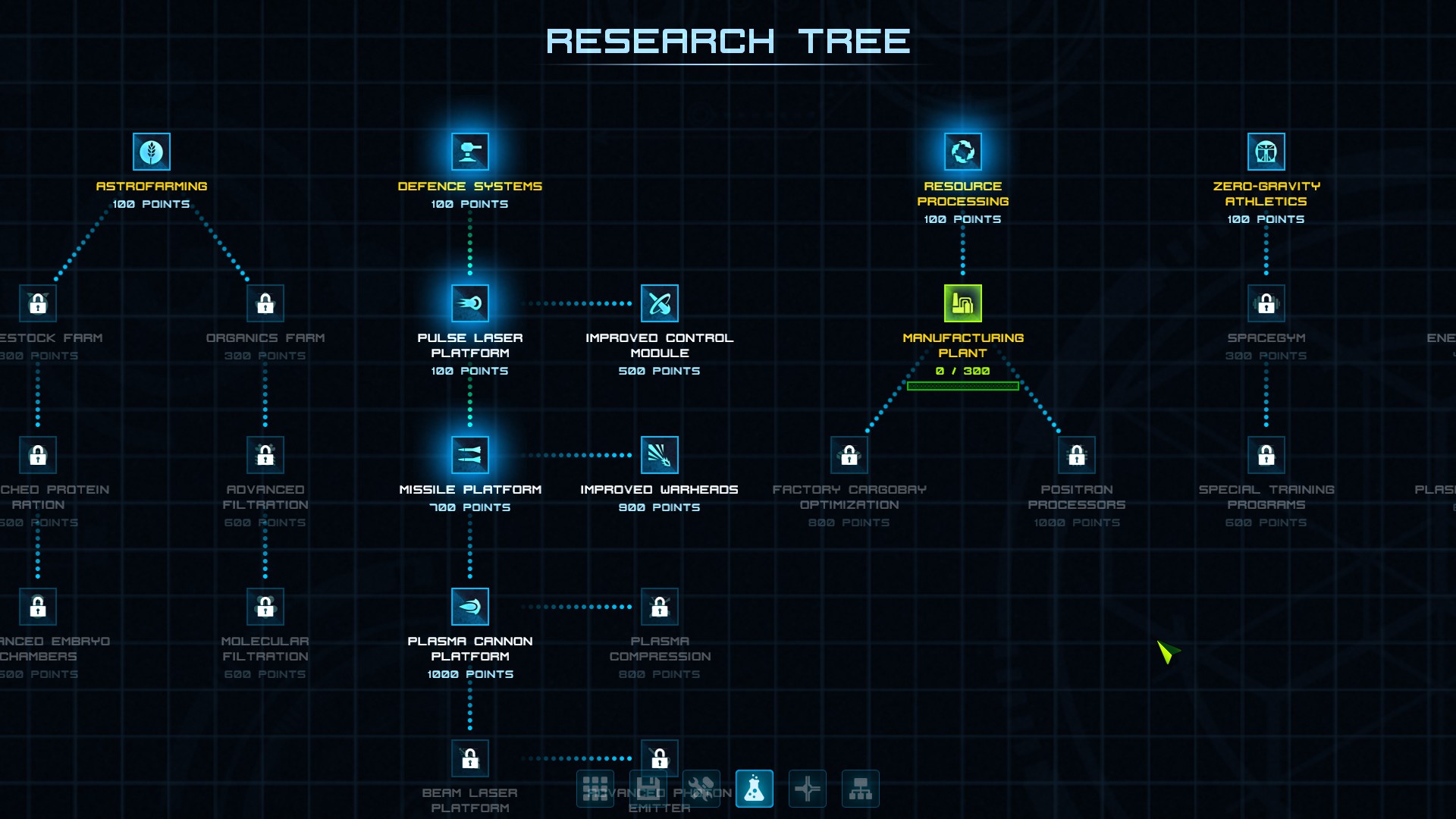 Resources include first-level basic resources such as oxygen, food, power, or ore, and second-level processed items, such as metal, plastic, meals, or ammunition. You produce first-level resources through the construction of certain modules and assignment of appropriate people to professions, while second-level resources must then be processed in a manufacturing plant. It’s a simple model, but it works well enough. Given that some of the first-level resources come from special zones in the local area, it’s possible to run out of something, effectively stalling your station growth or worse. If you’ve built a supply or trade ship landing pad, then all is not lost even then, as ships may pass by and offer you what you need — for a price. 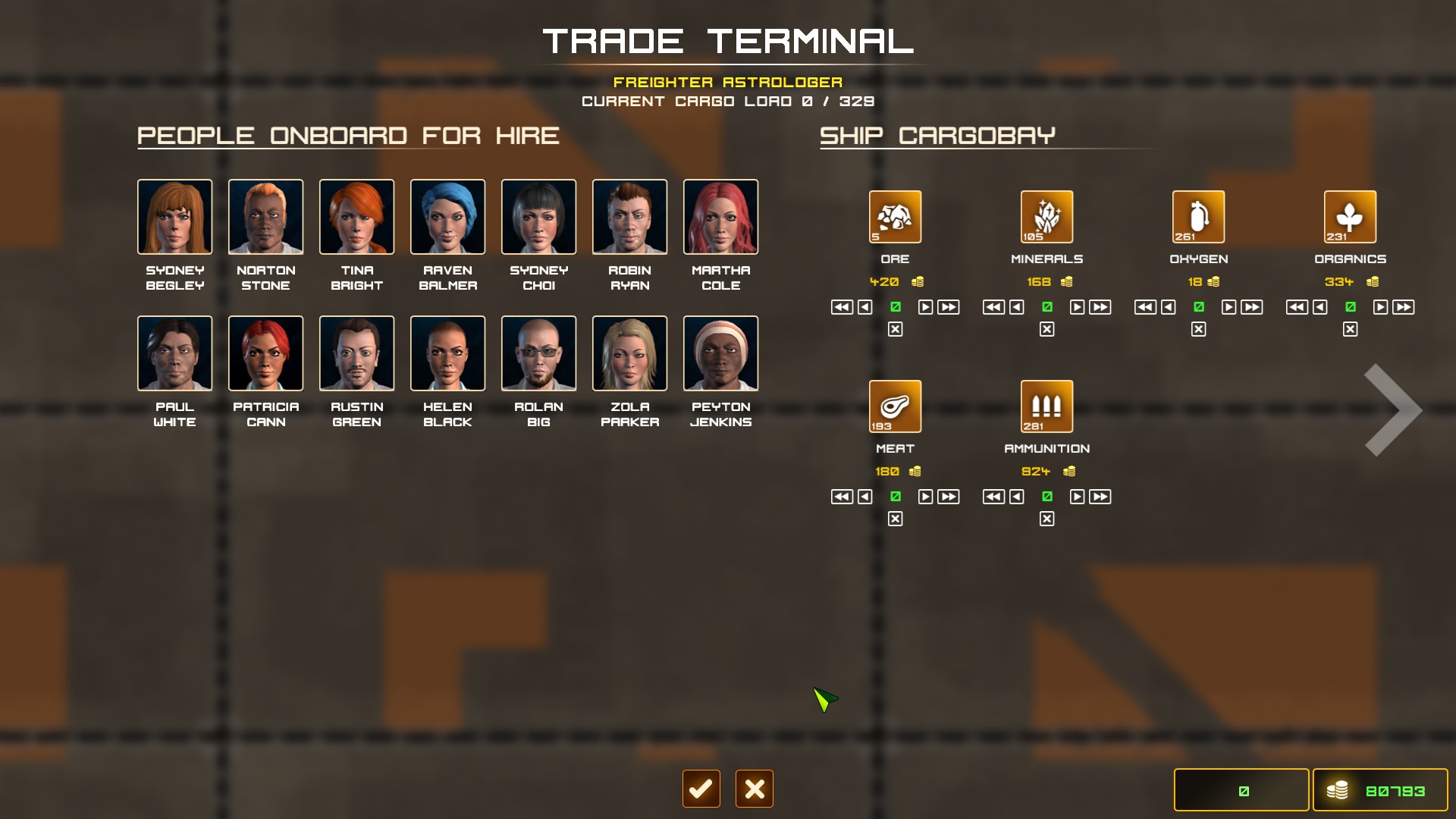 Your station inhabitants have a large range of skills and professions available, and you can swap profession almost whenever you feel like it. They also have a range of personality traits and attributes, adding variability and interest to the game. You don’t normally control them directly, instead assigning them a profession and leaving them to it, but you can order them to perform certain tasks, such as going to work or visiting the medbay. This can decrease their mood. They’ll occasionally make their thoughts known through little text bubbles over their heads; these are amusing, but could do with a bit of editing.

The game features asteroids and pirates that will damage your station, and defensive modules that you can place to destroy them before they destroy you. There’s no real combat, as such, though. The standard pause, play, and accelerated time controls are available, and I’m thankful the developers decided to allow control of most of the game’s features while paused; things can get a bit hectic on occasion. 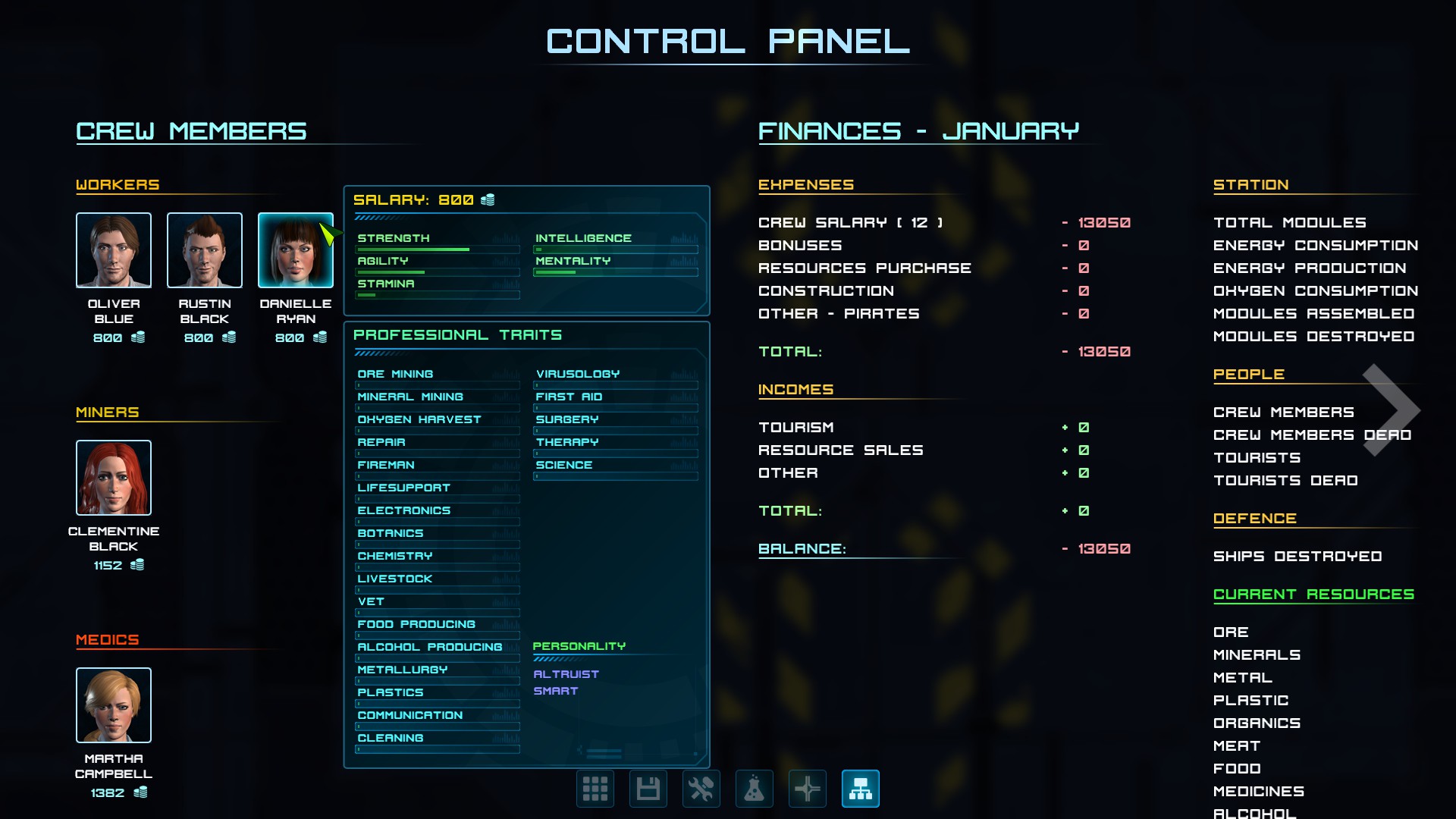 The game comprises two tutorials set in the Sol system, six missions of varying difficulty and size in other star systems, and a random system mode. The tutorials do a reasonable job of introducing the basics, though some of the grammar is terrible, and it’s not yet clear to me whether there’s a set goal in each of the system missions or whether they’re just more structured sandbox modes. If there is a win condition then it’s not explained and I haven’t managed to reach it yet. The random mode doesn’t allow any configuration or selection of parameters, which is a shame; being able to tailor the level to your liking would be a big benefit to replayability.

The game does have a few gameplay issues. The AI of the station inhabitants seems a bit off, for example. People often seem to wander about aimlessly; you might find your technician hanging about in a spaceport that hasn’t even started construction yet while another module leaks precious oxygen into space. Sick people won’t go for treatment on their own either, even if they happen to be walking past a medbay, and they often wait to eat, sleep, or ‘get fun’ until their needs are making them downright miserable. My stations always seem to eventually devolve into two groups: the stupidly happy who have asked for pay rises and seem to think I can’t do anything wrong, and the eternally miserable who complain until they have no ‘moral’ (sic) and then refuse to do anything except sit in the lounge. 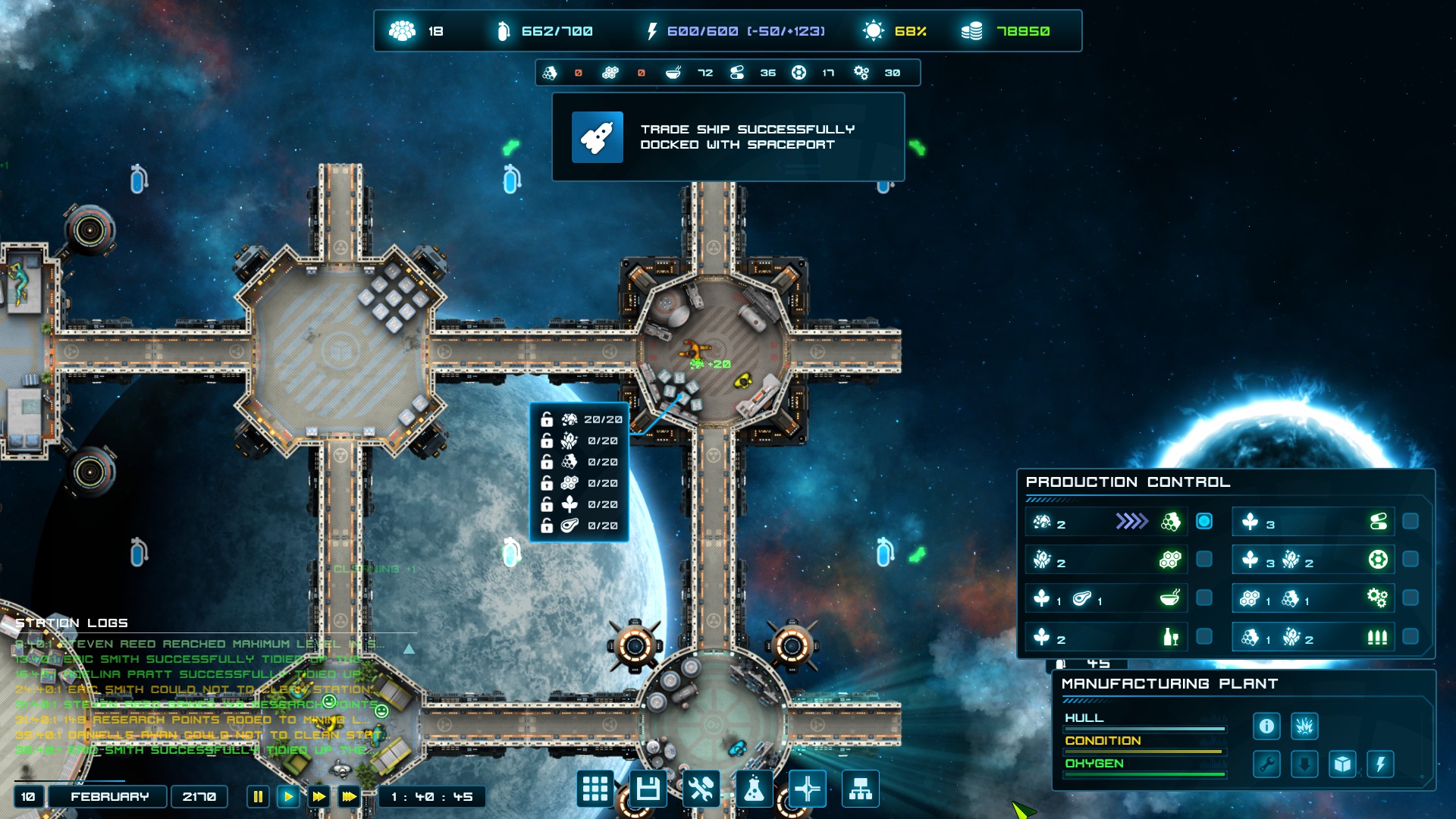 It’s a little buggy, too. So far I’ve had two CTDs — both when starting a level, so at least I didn’t lose progress — and I’ve noticed that some of the module information screens don’t work, either at all or they show the wrong screen.

Cons:
– Some AI weirdness
– Grammar
– Can get a bit repetitive 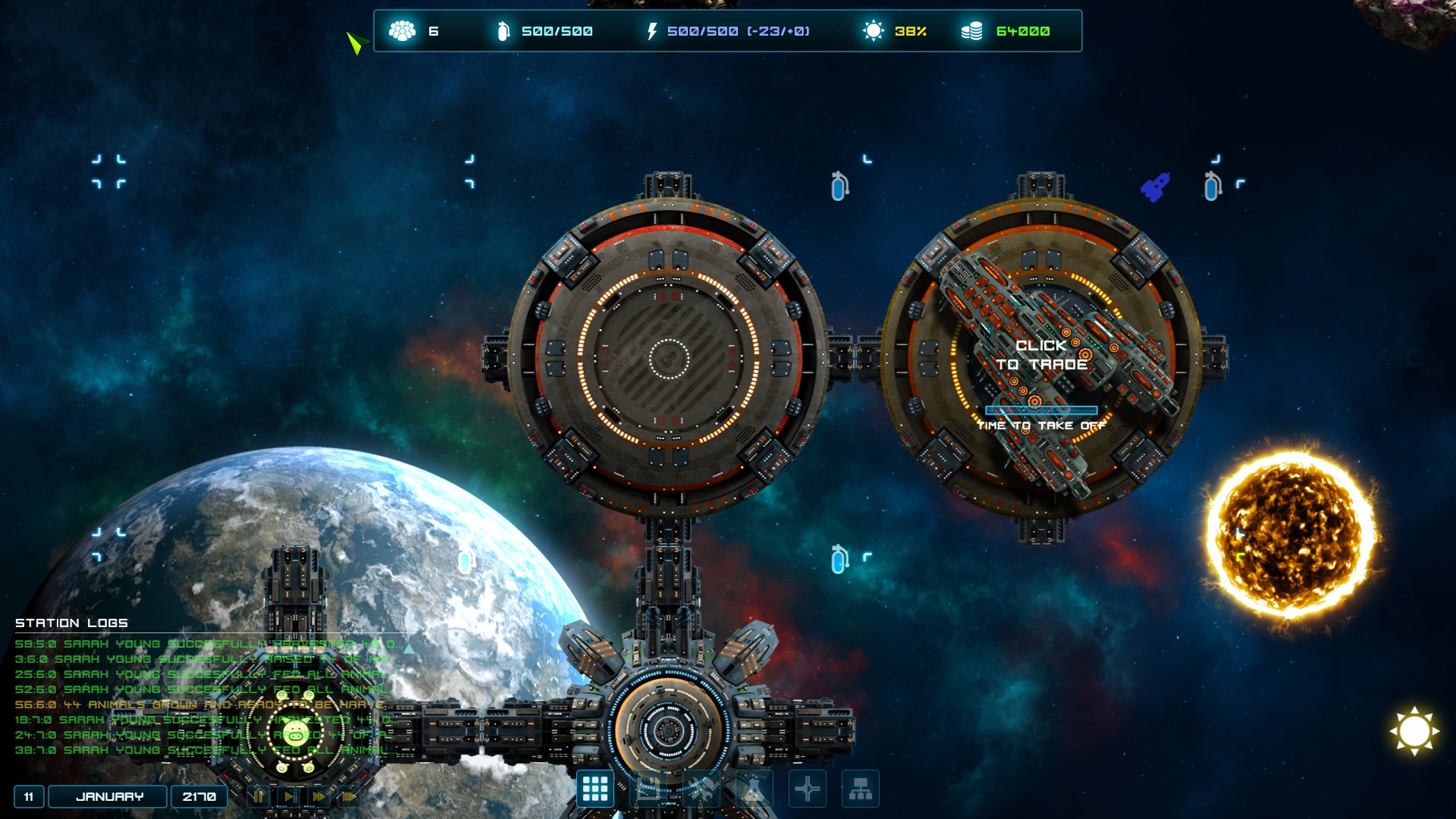 StellarHub is a fun space-station construction and management game. The core concepts are simple, but well thought out and implemented, and the excellent soundtrack and pretty graphics give you something nice to watch and listen to while you play. The game is let down a little by poor grammar and some issues, particularly with recalcitrant AI, and replayability could be improved with a couple of tweaks to the random level generation. Overall, though, if you’re a fan of the genre, you should give StellarHub a go.