A suprise release on Steam caught everbody off guard. The classic on rails shooter Rez Infinite finally comes to PC. Does it live up to its legacy?

An audio-visual interactive experience?
A simple on the rails shooter?
A cultural touchstone of 2001?
An art installation?
The best goddamn syncopated soundtrack ever created?
An ode to vector graphics and Gouraud shaded polygons?
A love letter to the Roland 909 drum machine?

The answer, all of the above.

The genesis of Rez is easy to trace. Obviously inspired by classics such as Space Harrier and Panzer Dragoon. The latter not only being an inspiration but part of the DNA of the newly formed development house; United Game Artists, which coded the title. The key staff were drafted in from Team Andromeda, due to their expertise in rail shooters.

UGA director Mizuguchi wanted to create a rhythm game after traveling in Europe. He had immersed himself in the European dance scene and attended massive open air raves in Germany. He was impressed by the DJs using a call and response technique to heighten the crowd involvement in the experience. Taking in the infamous Burning Man festival, solidified these ideas further. He devised a Quantization technique where players of any skill could paint the screen with a lock on target cursor that would trigger either a drum pattern or sequence of notes. This would be in perfect time with the soundtrack, becoming the core gameplay system, underpinning the entire game. 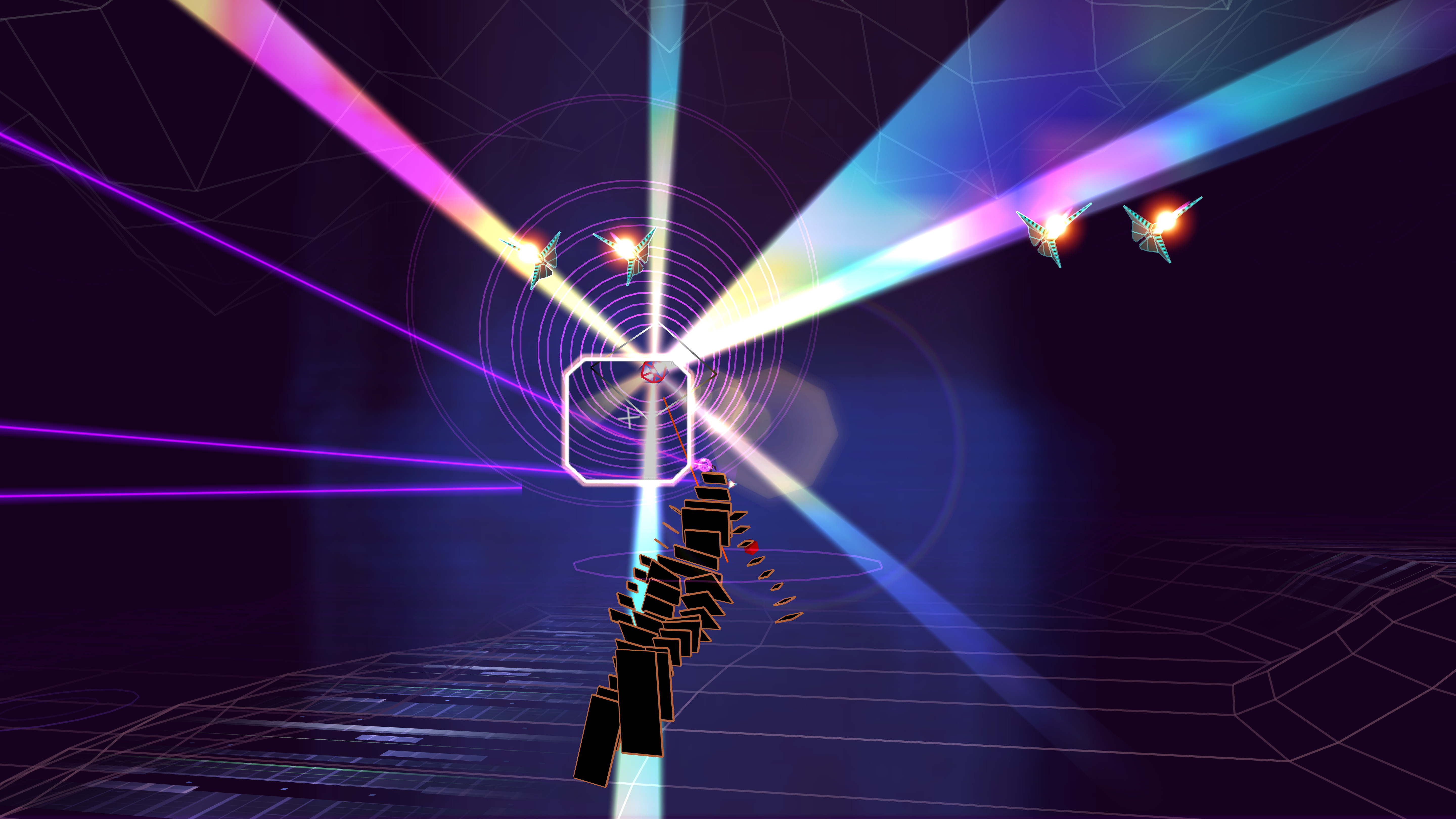 The visual aesthetic and nebulous story narrative borrow heavily from the movie Tron. The actual title of the game is a spin on the word derezzed. A term used to describe characters being killed or terminated in cyberspace. Rez apparently means the polar opposite of that. Of course, all this is bound by the folklore surrounding the game and may be twisted by well-meaning journalists and translation interpretations.

Rez Infinite is, according to the press blurb, the definite version of the game brought to the PC platform. The original was given an HD remake back 2008 for Xbox live arcade That version upgraded the visuals to a 720p presentation. The latest version has the ability to output resolutions up to 4k if you have the hardware grunt. 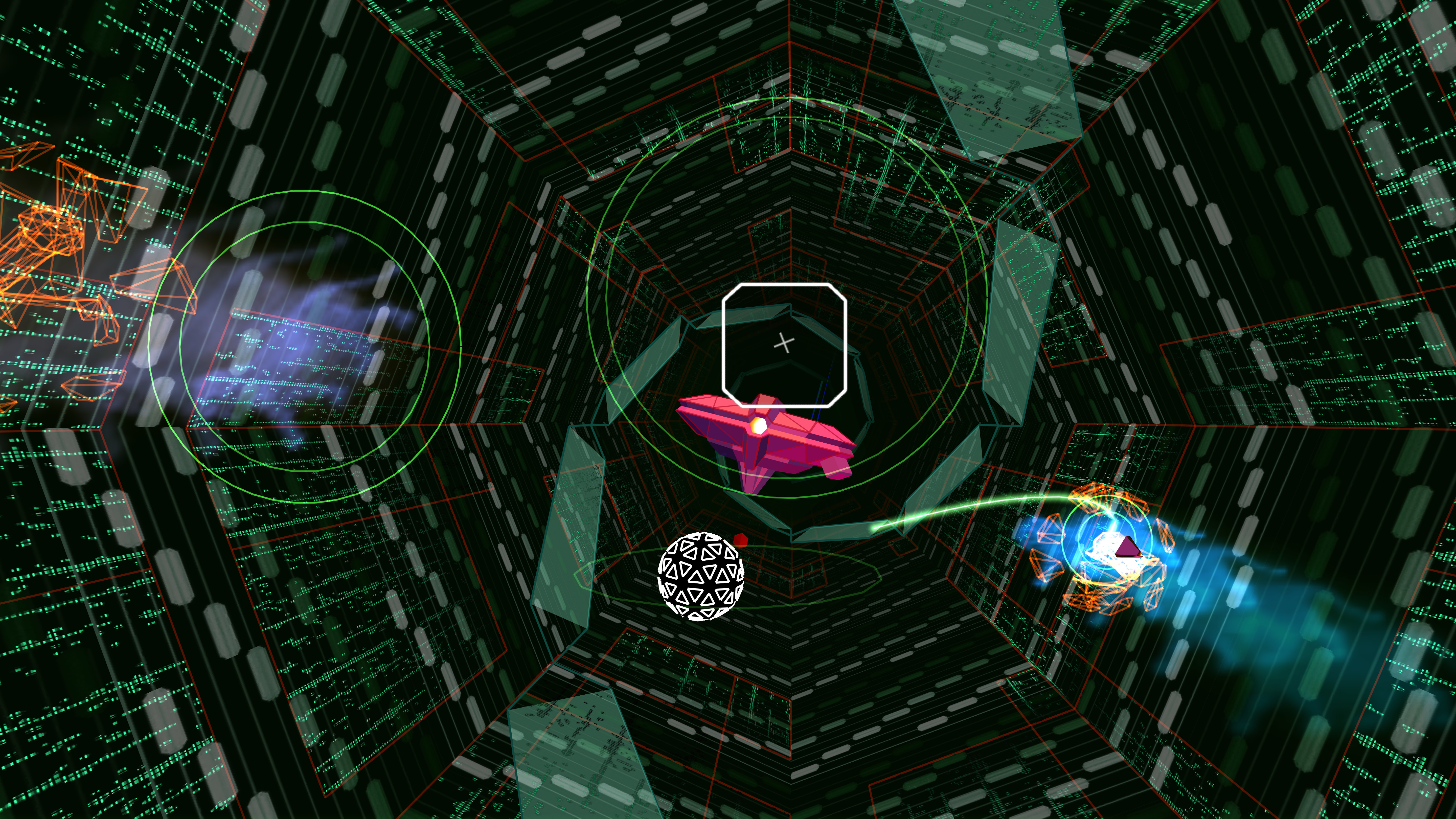 The game runs well on my potato laptop. An aging dell beast with old dedicated nVidia chipset. There’s was no noticeable stutter using the default setting. Normally I have to spend 10 minutes fine tuning the graphics options in order to maintain a steady frame. No such faffing about is required for Rez. It just simply works from the get go and looks beautiful.

Moving over to my budget level gaming PC, the contrast is stark. Running at a solid 60FPS at 1080p, the game is a joy to behold. The difference between the Dreamcast version and this incarnation is a quantum leap. The new fidelity really brings out the colors. The vector graphics shine with more vibrancy and clarity. All the PC advanced filters help to show off the high-resolution assets, in all their glory.

Rez checks all the boxes you’d expect from a PC conversion. From the humble laptop to a “balls out” 4k setup, all are catered for with a plethora of resolution, sample rendering, texture, and anti-aliasing options to fine tune your experience.

Digging deeper into the original content options, besides the original 5 level campaign, there are a number of extra modes including;, Boss Rush, Direct Assault, Lost Area and Trance Mission. The latter is my pick of the bunch. It’s essentially a spin on the traveling mode (no penalty, no death) where you play the game with no avatar and endlessly loop the levels. A great chill out mode where you can enjoy the visuals for as long as you want.

It’s soundtrack still retains the crispness of the original. The game is a homage to the mighty 909 drum machine. A legendary beat box whose sound peppered the aural landscape of the late 80, 90’s music scene. The syncopation between hits on targets and the snare drum is on point and timeless. Even the cool down between worlds can be used to create clap sequences by mashing on the target button. Bellissimo. 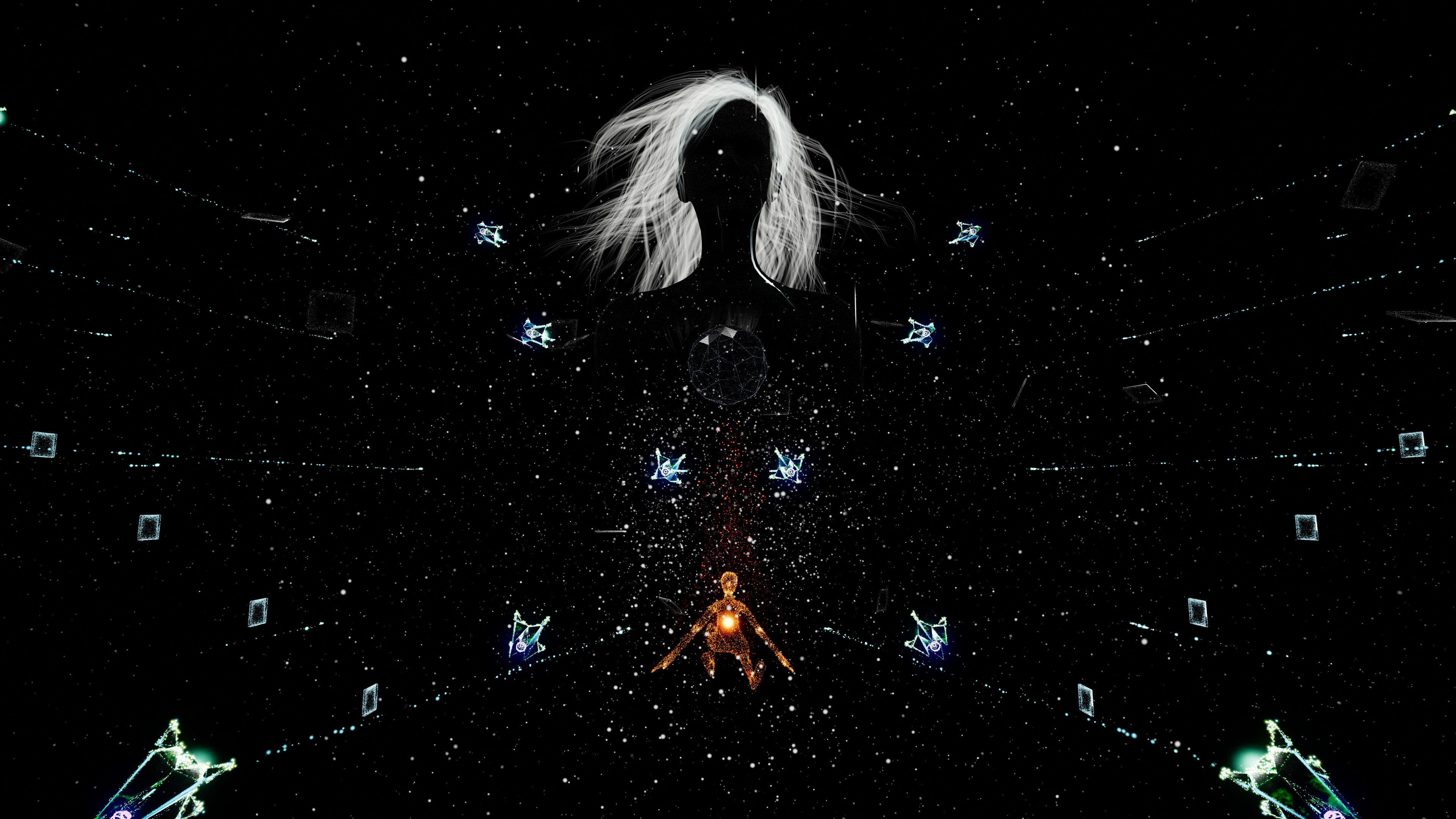 The new addition to Rez Infinite is called Area x. This is a separate executable using the Unreal 4 engine. It takes the original formula and does away with the constraints of the on rails mechanic, bringing the game to a whole new level. You now feel free, shackles cast aside and liberated. Gone are the vector graphics and polygon aesthetic, replaced with a more organic particle system. The graphics are simply gorgeous and my feeble brain can barely describe the beauty of this environment. But I’ll give it a go.

Imagine yourself transported into the deep darkest corner of the Marinas Trench and interacting with the Day-Glo plankton and weird bioluminescent creatures whilst listing to Orbital’s Belfast and painting the landscape with sound and fireworks. It’s a trip, and make no mistake, this is the first time I’ve ever gotten goose bumps whilst playing a game. The visual joy and endorphin rush was like no other. A remarkable achievement for someone like me, a jaded old skool gamer, who has been there, got the t-shirt. 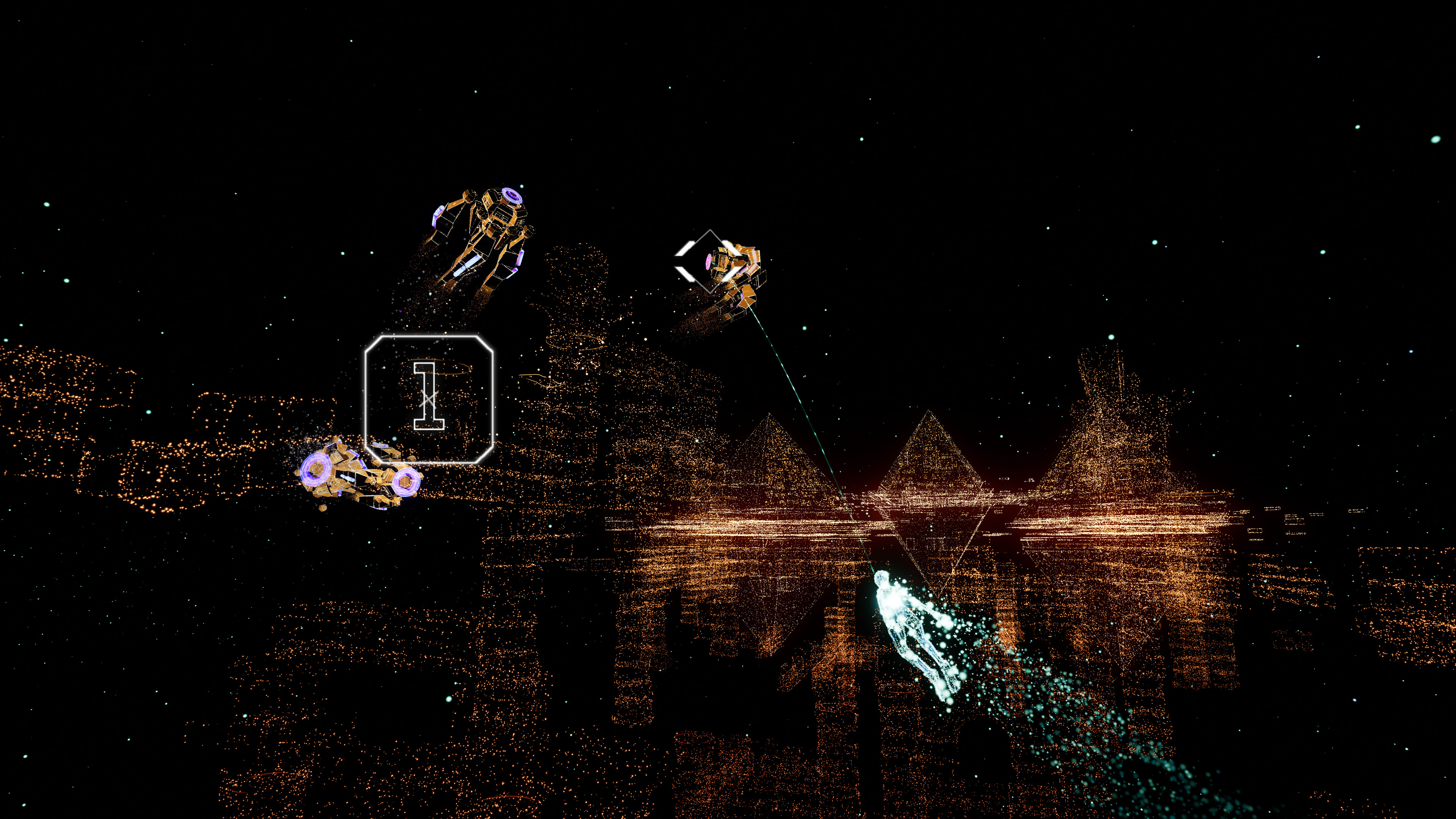 Rez is a masterpiece. I put it up there alongside titles such as Portal, Doom 2016 and the original Deus Ex. After spending a weekend with the title, there are no weaknesses. It plays great on a variety of systems. It caters to the hardcore crowd with 4k setups. It’s a game that every PC players should have in their library. Regardless of the fact that, even if you are not into on rails shooters, the visual /sound design can be enjoyed in the no penalty traveling mode. It’s an immersive Winamp plugin that you can dive into and enjoy. Given the timeless aesthetic, its legend will grow stronger over the coming years, becoming the yardstick of pure game design. A singular vision brought to fruition with Exocet-like accuracy. So I say to you, young or old, skilled or just curious. Jump into REZ, the water is lovely.