All ye board gamers in search of a real challenge, rejoice! Terry Mystica comes to Steam & mobile.

The Terra Mystica that launched on Steam and mobile platforms in 2017 is an adaptation of board game publisher Feuerland Spiele’s first release, 2012’s Terra Mystica, designed by Helge Ostertag and Jens Drögemüller with art by Dennis Lohausen. As a board game it proved very successful, winning various 2013 board game prizes, and establishing Feuerland as a publisher. The major difference between this title and other popular board games on Steam like 2012’s Ticket to Ride, 2014’s Talisman or 2013’s now-discontinued Catan is that Terra Mystica is freakishly complex!

Teach me the rules, senpai!

Terra Mystica is a game that is hard to learn, and, unfortunately, the tutorial is half rushing through topics without properly explaining them, and half going into a very detailed explanation of rules that are completely devoid of context. It is not short, but it teaches very little. The developers seem to know this because, at its end, they tell you to just download the board game’s manual and give that a shot. Go ahead, I’ll wait for you!

As you RTFM, it dawns upon you that the original designers already knew they had created a hard-to-tame beast, and to lessen the pain of climbing up a mountain of a learning curve, you’re actually told exactly which factions to pick in your first game and where to place your initial dwellings.

Glancing through the popular board game community and database BoardGameGeek, it’s an actual challenge to find a title the community rated ‘heavier’. In that sense, gamers who have always preferred the lighter slopes of Total War, Civilization or Ticket to Ride and shied away from the effort to learn a Europa Universalis, Football Manager or Dwarf Fortress might well want to abstain from this title.

What do you even do‽

As attentive readers will already have gathered from the manual PDF, the game is split into six larger turns which are split into individual rounds in which each player spends their resources on one larger action. This might be terraforming a terrain piece to your faction’s environment and building there, upgrading an existing building, investing into one of the four cult tracks (fire, water, earth, air), and so on. Every turn there’s a new condition to gain bonus victory points, and every turn each player picks a bonus card that provides additional resources and potentially bonus scoring methods. In workers, gold, priests and power there are four base resources, used to build and replace buildings, obtain upgrades to your terraforming costs or range, convert between the resources, and invest into the cult tracks. Upgrading a building to a temple or connecting enough buildings to form a town lets you choose yet another special bonus, often with direct scoring implications. Terra Mystica is a game of strategy, resource management and planning ahead. Before, at the end of the sixth turn, no fewer than three sub-scores are used to determine a winner. In addition to victory points, there are points awarded to the players with the largest connected settlement, as well as to those who have progressed the furthest on the cult tracks. 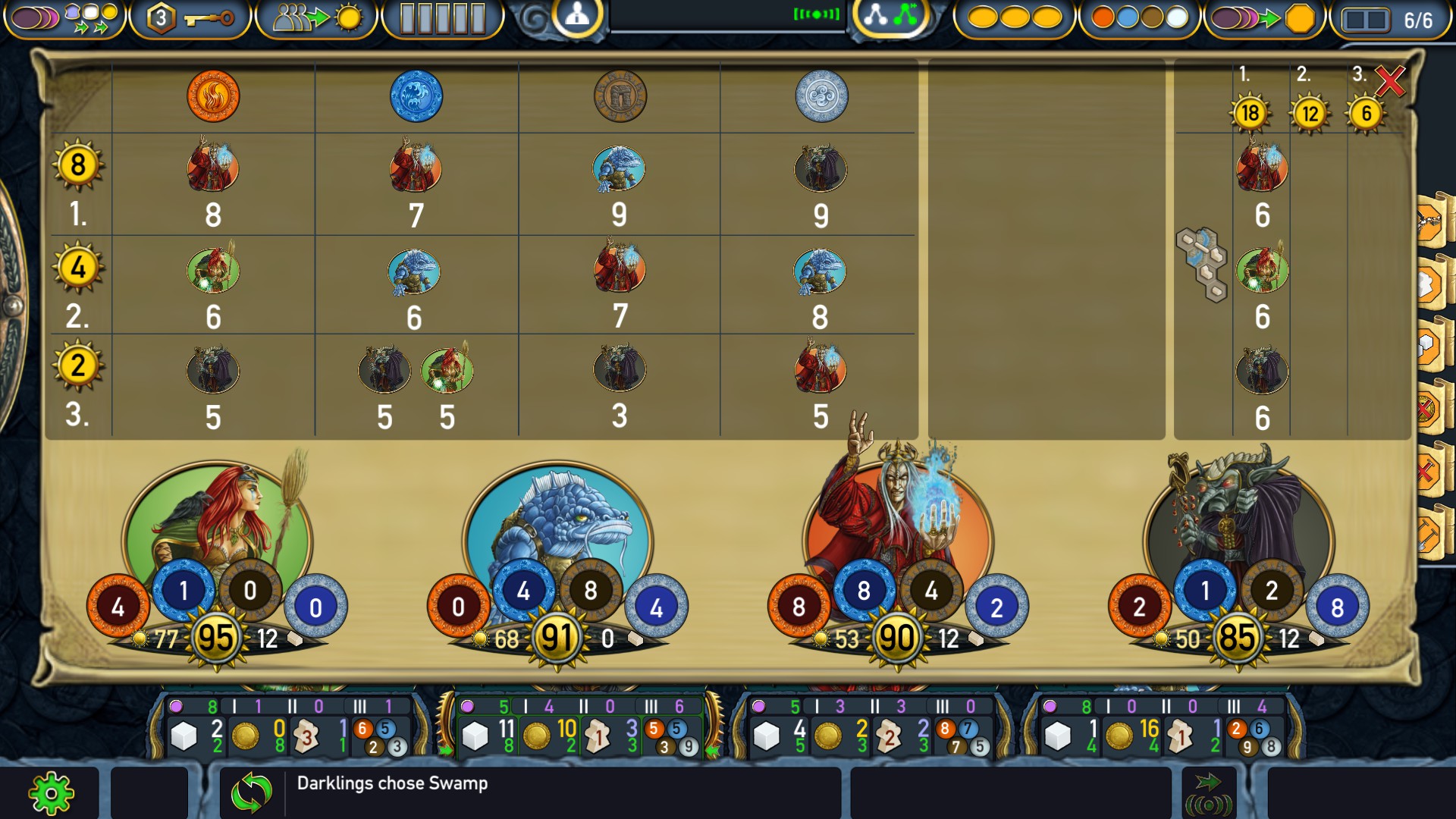 The base game comes with fourteen factions that vary somewhat in their unique abilities, usually along the lines of getting a resource bonus or a unique gameplay mechanic. Nomads get more dwellings and can convert some terrain for free, Fakirs can build farther away using a Carpet Flight (and their more-distant dwellings count as connected for scoring purposes), Cultists have a mechanic to siphon cult track progress off their neighbours decisions – who you pick has a major impact on how you want to approach the game.
The game supports two to five players, but four or five is definitely preferred. Three also works, while two should be avoided, like with many board games. The AI is more than competent in its present state, and the developers promised higher difficulty levels in the future. Initially expect it to last around an hour and half against AI, and much longer against human opponents.

That the Unity engine was leveraged to make this not only a Steam game but a mobile release too (or first?) shows in many ways. Tooltips on mouseover, long a mainstay of strategy games, are nowhere to be found. A bunch of interface elements use click-and-drag navigation, an obvious choice on a touchscreen device but out of place when using a mouse.
On a more basic level, the menu system doesn’t feel like a release version. There is a game / savegame selection menu, but without any labels to tell you which save is which. At the end of a singleplayer game, the last autosave still stays in the list of active games until you delete it. If you are enrolled in multiple multiplayer games, good luck keeping track of which is which without using out-of-game note-taking tools. Hopefully, the developers will be addressing all of this with patches.

As far as multiplayer goes, there are a variety of options to be found. It supports local hotseat for two to five factions with a mix of humans and AI. Online unranked multiplayer against friends sadly doesn’t seem to permit adding AI opponents.
Fast ranked mode is pretty much real time multiplayer, with up to ten minutes to take an action.
Finally, there is the asynchronous ranked mode, in practice somewhat like Play By Email (PBEM) modes of games from decades past, permitting you to join a whole lot of simultaneous games where each player gets up to 72 hours to complete their current round. Unfortunately, the lack of game labels is a real problem here, but it makes great use of Steam Turn Notifications, and when a multiplayer turn is available, you will be gently yanked into that game.
All the online multiplayer modes appear to be cross-platform, meaning PC, Mac, Linux, Android and iOS can play together. 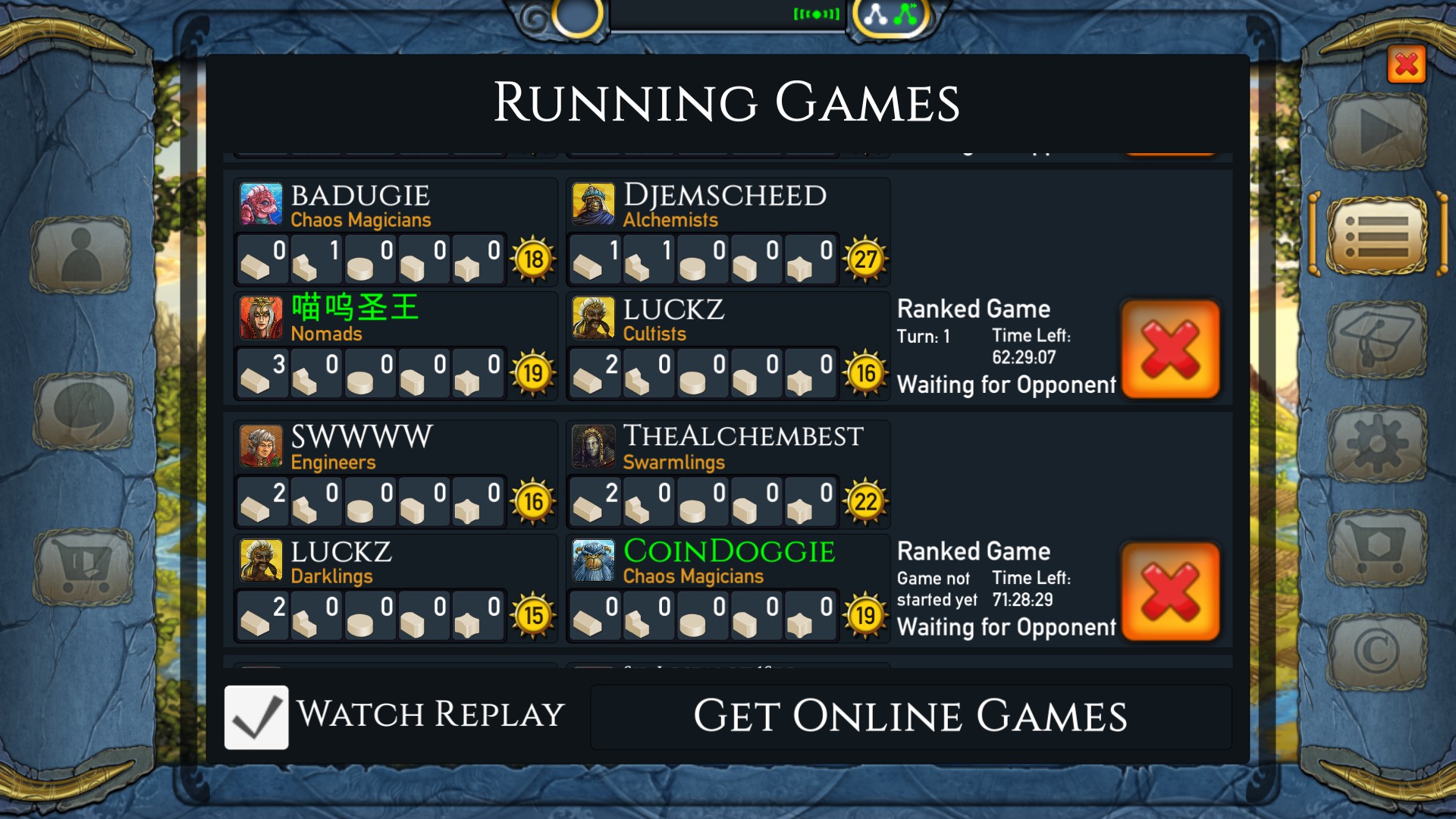 The game purchase includes the upcoming (“later 2017“) DLC that will add six new factions and new gameplay elements, based on the 2014 board game expansion “Fire & Ice”.

There’s no doubt that Terra Mystica is a very deep and enjoyable board game (more precisely: Eurogame), but it doesn’t get points as an amazing PC game. The adaptation by the small team at DIGIDICED  is largely decent, but often feels limited by being a multi-platform title. Many gamers will feel intimidated by the game’s complexity, while existing fans of the board game already have free community-provided singleplayer and multiplayer browser games. An interface redesign and some extra polish could go a long way in making this title the premier Terra Mystica experience. Until then, it is hard to recommend it as a full price purchase.