Nadia Was Here is an RPG that describes itself as being inspired by 16-bit classics like Final Fantasy and Golden Sun (which I think were a bit higher than 16-bits, but I digress). The latter caught my eye since while I’m old enough to realize they’re objectively not great, I do still have a soft spot for the series because I played both the originals as a kid. Nadia was Here certainly stands on its own, however, with some interesting ideas.

It certainly doesn’t have the typical party you’d expect from an RPG. The first character you take control of, Hogan, was a hero, but by the time the story begins he has settled into a life of wallowing in booze and no-one in his village could care less about him. One night he wakes up to find his house has been broken into, and his prized shield stolen. While pursuing the thief, he chances upon the titular Nadia, a thief who has just broken out of jail by beating up two guards. After strong-arming her into helping him, they chance upon Tereshan, a mage investigating what he thinks could be something important happening to their world – the two reluctantly agree to escort him to the library on their way, but neither really cares. So not exactly your usual bunch of heroes.

With an atypical party like that, it’s fitting that Nadia was Here has a battle system to match. It’s similar to the one Final Fantasy used for much of its games, with your characters all in a line, and an icon for each representing when they’ll take their turn that fills up gradually. In this case, however, combat is entirely in real time, and your party will attack – or some other action they’re set to – whatever’s in front of them, and the same holds true of enemies. You can move your characters around at will between the three spaces you have available, allowing you to save a character low on health, or attack an enemy multiple times with different party members. 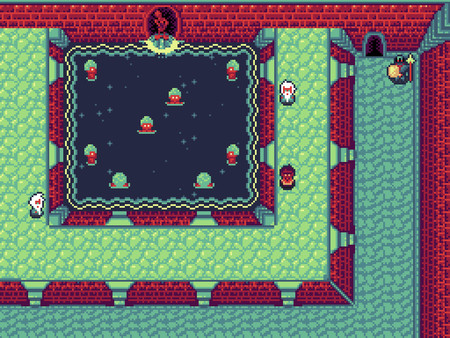 This makes things pretty streamlined, and the party has its own strengths and weaknesses. Hogan can switch among different shields on the fly to change his resistances, making him the team’s tank, but he can’t do anything besides attack directly. Nadia is versatile thanks to the various tools she can use, but doesn’t hit so hard. Tereshan has spells that can support the team and harm the enemy, but he needs to spend a move actively learning new ones from enemies. It’s strange, but definitely interesting, and battles can get pretty hectic as you’re shuffling the three of them around; thankfully you can pause at any time with the spacebar. Another change is that your characters don’t get stronger just from fighting battles, but by finding items. Since enemies are all visible in dungeons that means you don’t need to fight anything unless you get caught in a battle, although there are mandatory fights between each area on the world map so you stay up to speed. 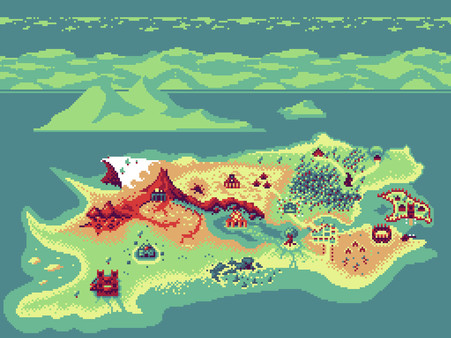 Dungeon areas in Nadia was Here are heavily puzzle-based, presumably Golden Sun‘s influence. Thankfully you don’t need to shuffle your inventory to do them like in those games, but instead, swap between tools at the push of a key. They’re pretty simple puzzles, like block pushing, but not so much that solving them isn’t satisfying.

I should also note Nadia’s graphical style. While it’s pixel art, the game uses a limited color palette to give the world a bizarre, almost dream-like quality. That’s actually what attracted me to it to begin with, so it may catch your eye as well. 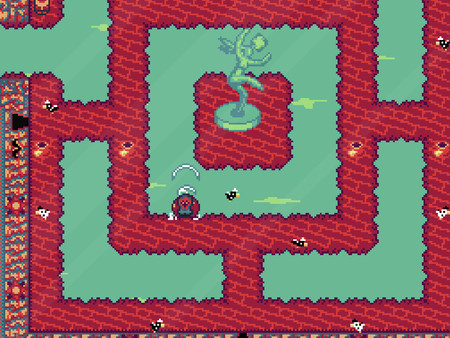 According to the developer, Nadia was Here can be beaten in about ten hours. That makes it briefer than some other RPGs, but that also means there’s little chance of it running into Golden Sun‘s major problem of being far too verbose. If you want something new, or just an RPG that doesn’t kill a ton of time, I think it’d be a good buy. There’s also a demo on Steam, so you can try it beforehand.