The Long Journey Home is a space adventure with rogue-like elements. Can you survive the journey home? Not on your first try, I’d wager.

The Long Journey Home is a space exploration game with rogue-like elements and is the first game from developers, Daedalic Studio West.

In the Long Journey Home, you take control of a crew of four people on the maiden journey of a star ship fitted with prototype technology: the faster-than-light jump drive. Your journey is supposed to be to Alpha Centauri, but the first use of the drive damages the ship and sends it careening through interdimensional space to arrive in a debris field surrounding a strange metallic sphere orbiting a planet in a very distant star system from Sol.

Exploring the sphere and then the planets of its star system, and then the surrounding star systems, you quickly discover where you are and that you’re not alone; the universe is inhabited with all manner of aliens: friend, foe and otherwise. Can you elicit their help — or at least avoid their wrath — for long enough to escape the galaxy and begin your long journey home? 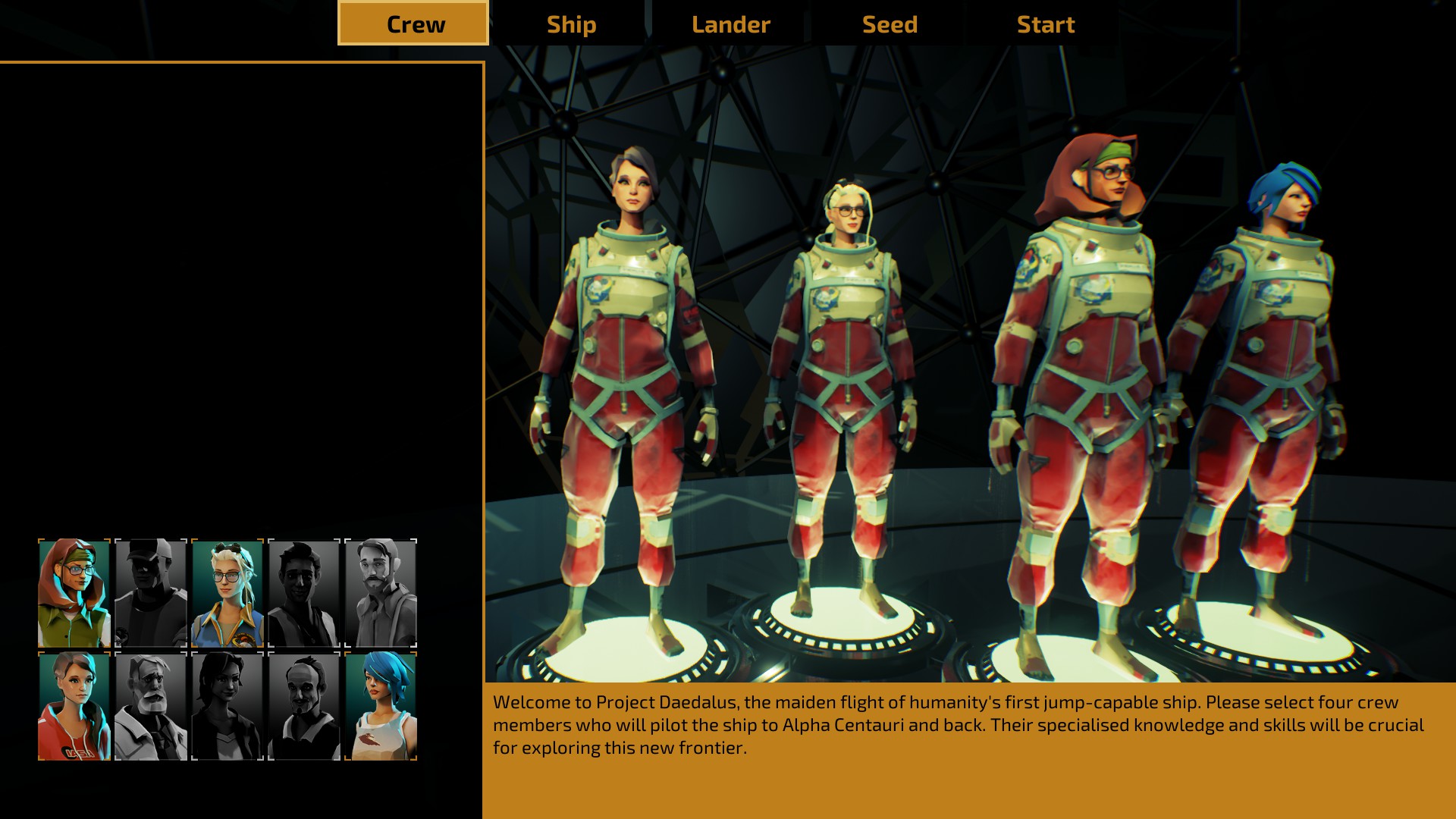 The Long Journey Home’s graphics are very well produced and of high quality, but differ immensely in complexity and presentation. There are essentially four distinct graphical modes, which for want of better names I’ll call on-board, interplanetary travel, local area, and lander.

The ship’s on-board systems are presented in a tab-based format, with text and graphical displays. The interface is smooth and works well with mouse or controller, and in the background of many of the screens you’ll sometimes see crew or your occasional passengers lounging around. These little touches are great, bringing life to the ship. There’s a communications screen, too, showing video of any aliens you encounter. 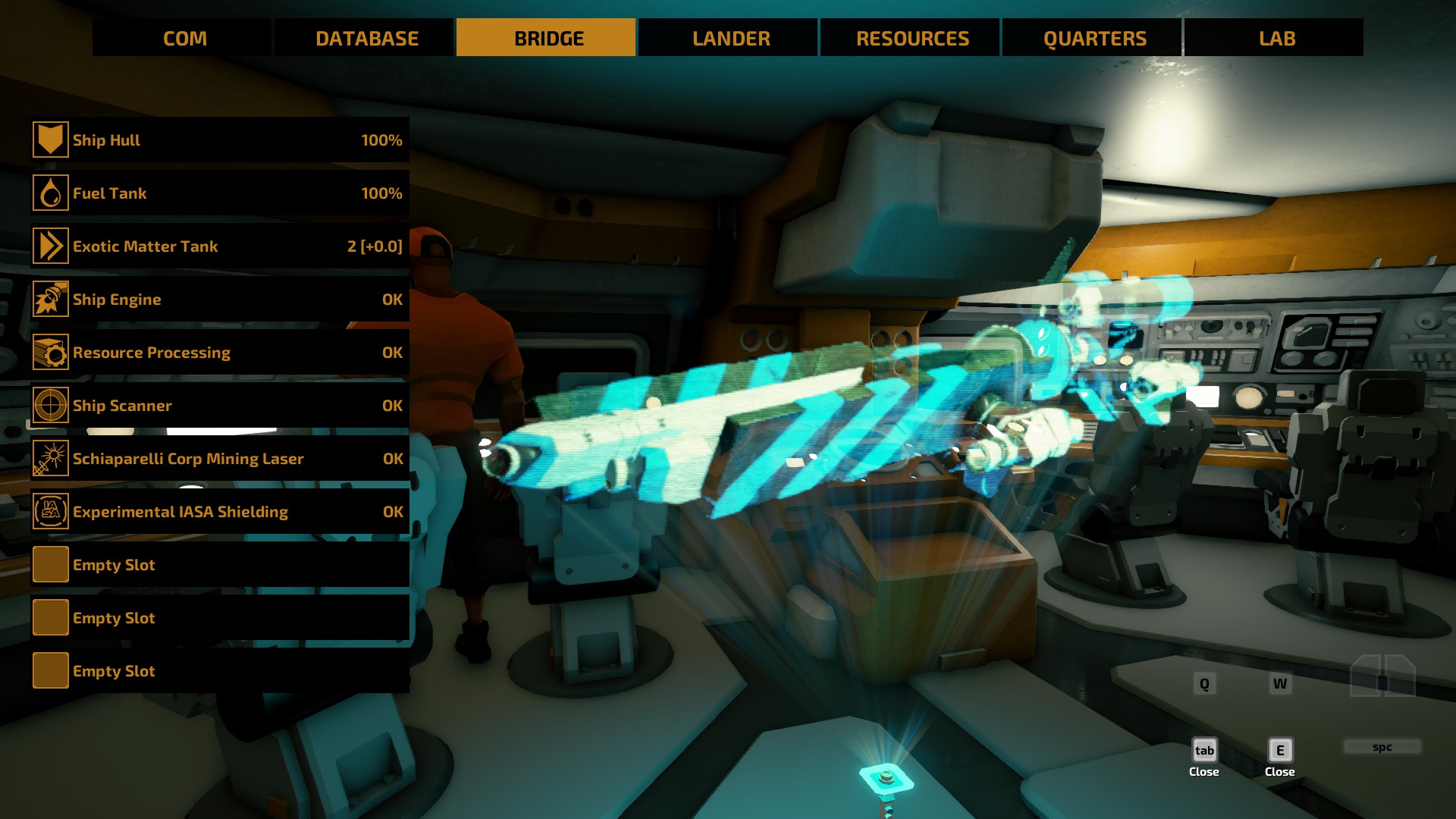 Interplanetary travel has your ship represented by an arrow with a small thruster when accelerating. It shows your current solar system as a plane in three dimensions, with a grid shown over the background star field, and a simple curved line representing your current path across the plane. The grid dips based on the gravity wells of the stellar objects in the system, and it works exceptionally well as an aid to piloting your ship. 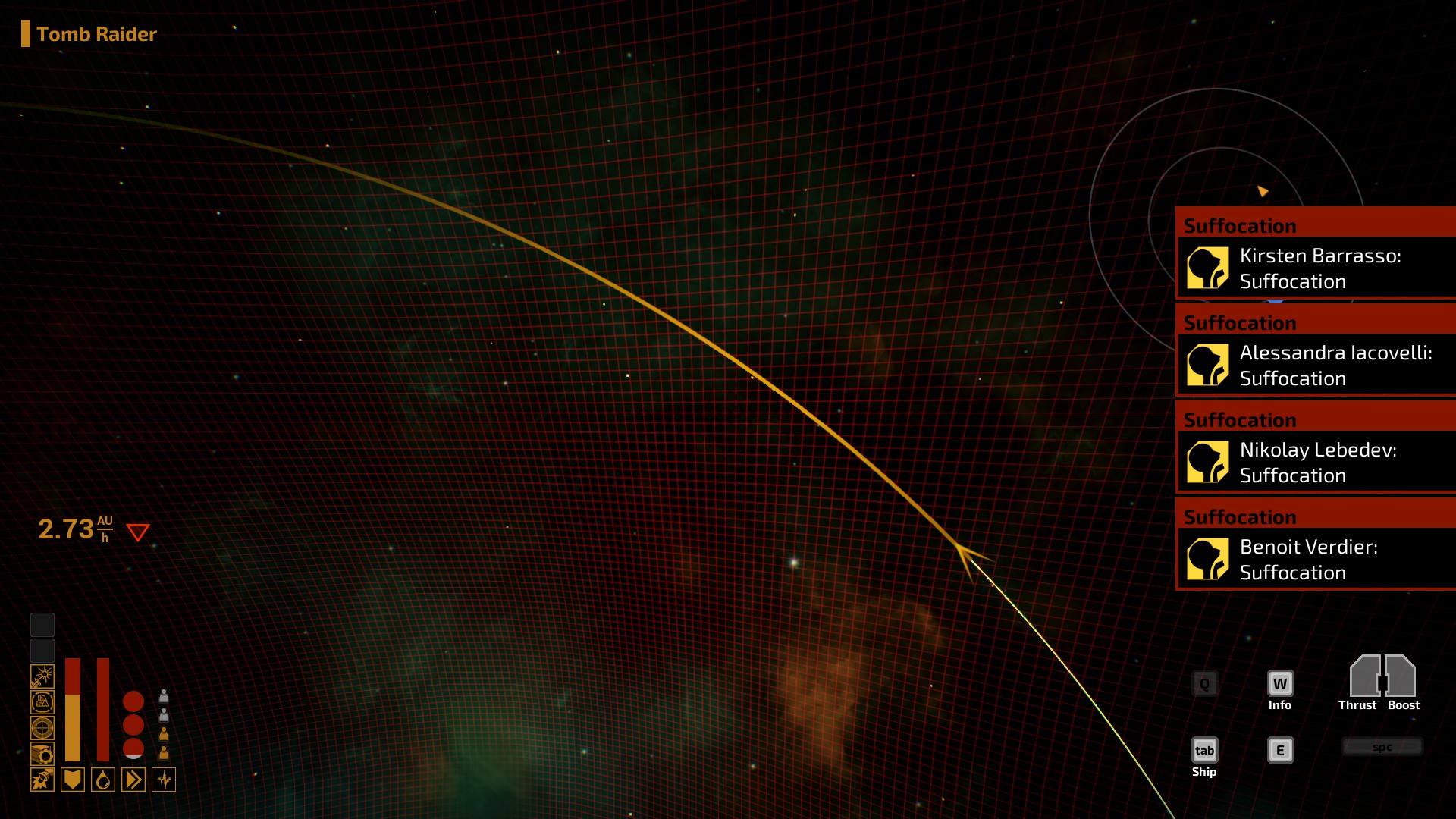 Local area mode starts when you encounter an alien craft or enter an asteroid belt or other non-planetary object. This shows a zoomed-in top-down view of your craft, with you taking direct control over the forward and side thrusters. Objects are rendered in 3D and are, for the most part, very pretty, though I find most asteroids to look rather more shiny than I’d expect. 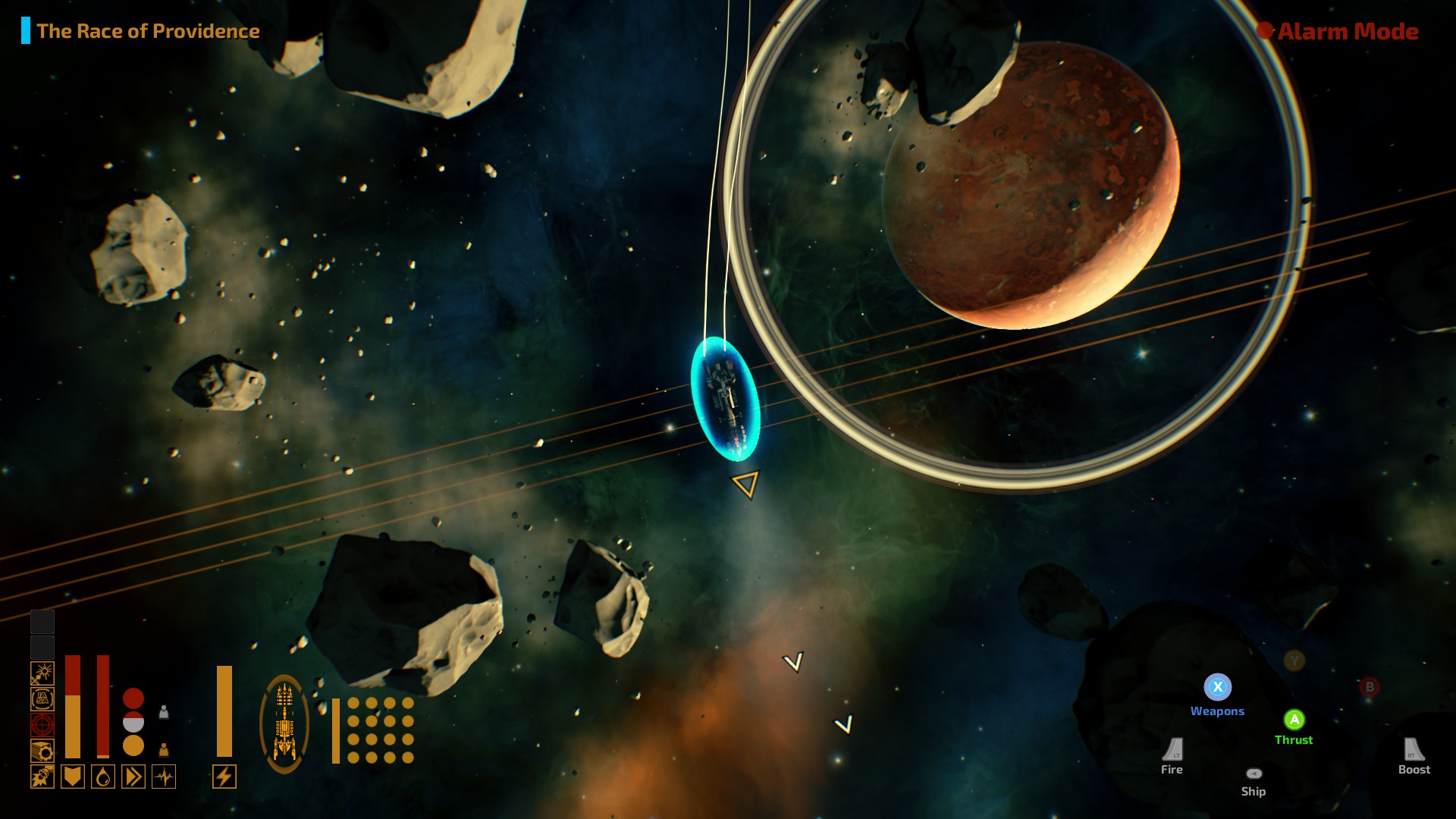 Finally, the lander mode is shown when you choose to land on a planet. This shows a brief and very well rendered cut scene of your lander detaching from your ship, and then displays a side-on view of the lander and surface of the planet, Lunar Lander style. The graphics here, too, are exceptional, with different planets having different atmospheres, lighting, surfaces, and other objects. It’s just a shame you can’t zoom in to get a better view of your lander once you’ve touched down. 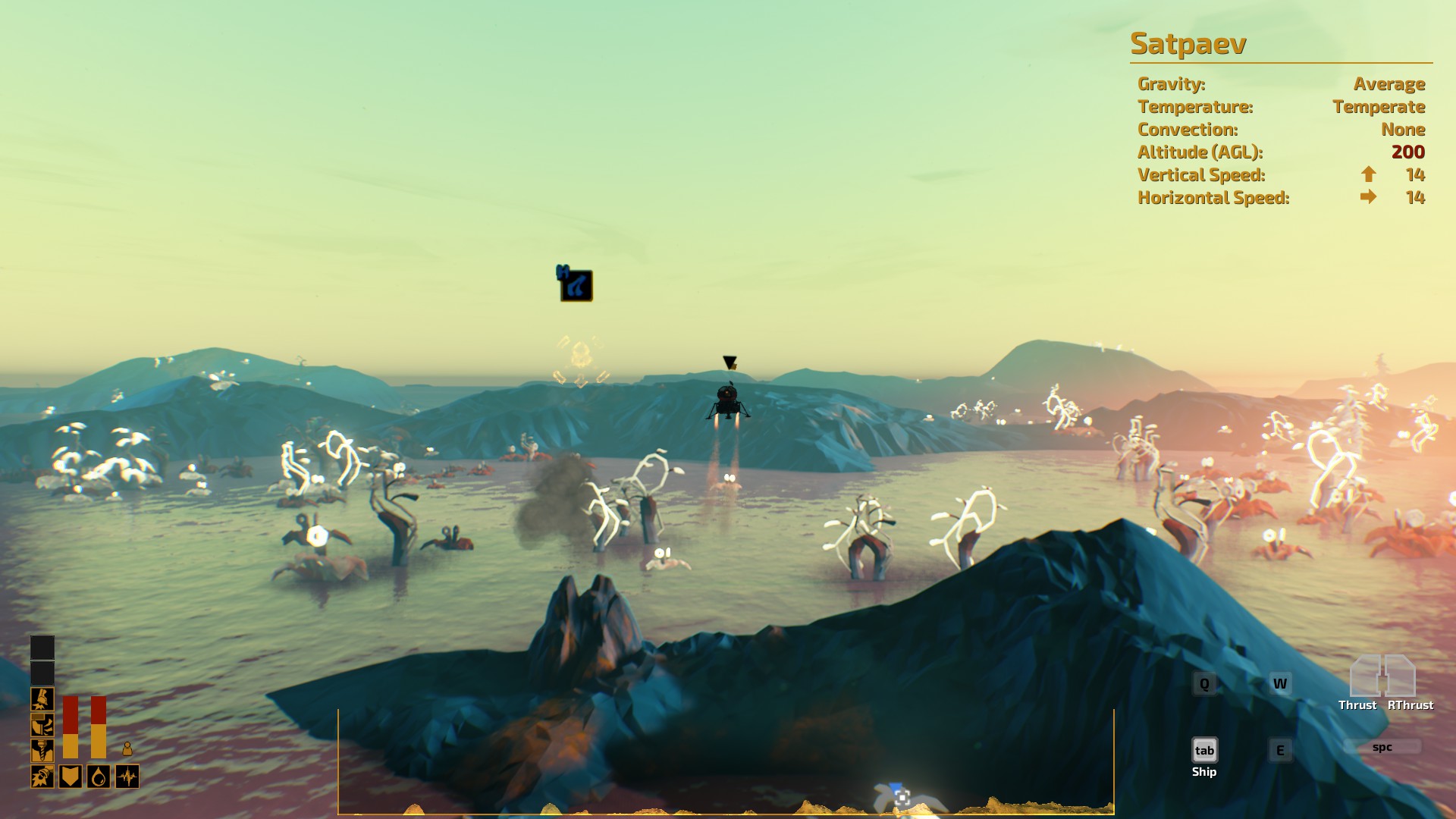 Overall the graphics are truly excellent, and the different modes work well together. There’s a handful of detail and performance-related options, allowing you to customise for your PC as required. I played on a GTX1070 and experienced no slowdown with everything set to maximum.

The music is brilliant: some of the best I’ve heard in a computer game. From dramatic, heart-pounding scores when you’re close to death, piloting your lander through the clouds of a gas giant in a last-ditch attempt to gather some fuel, or to the beautiful and emotion-charged uplifting title screen track, I love it all.

Sound effects are good, with nice landing thruster sounds and cool weapon-charging beeps. It’s just a shame there are no voices or alien communication sounds.

The Long Journey Home tells a grand story of four people on an epic journey through unexplored space, on a ship that’s slowly deteriorating, doing what they can to survive. The game as a whole is quite unlike anything I’ve seen before, with traditional Newtonian physics for space flight and landing, and rogue-like elements to ensure replayability and variation. Its various components most definitely add up to a game that is more than the sum of its parts.

The game begins with you selecting your crew of four out of 10 applicants. You then select your ship, from a choice of three, and lander, also from three. And you specify a random-number generator seed by typing in a short character string. This is a bit of a gimmick, but it’s also more than that; you see, it allows you to replay with a seed that you particularly like, or share the seed with others to compare performance. It’s a great addition to the genre; I hope we see more procedural generation games allowing manual seed input. 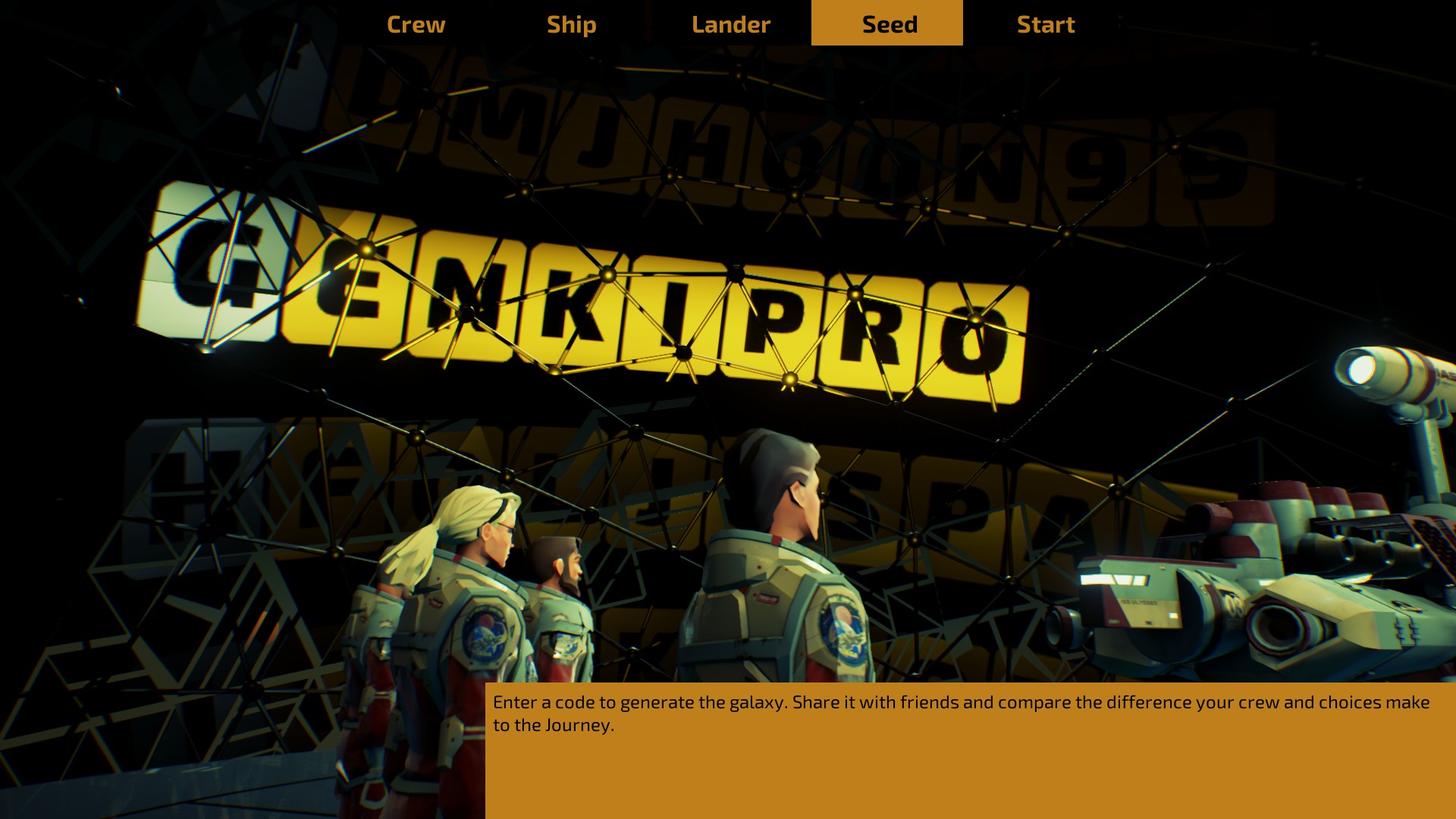 After the introductory piece, the remainder of the game is all about survival. You explore each system, landing on planets to harvest resources in order to proceed to the next system and, eventually, to Sol and the Earth. Interplanetary travel is quite calming, with a good degree of patience required to use gravity wells and orbit efficiently, so as to reduce your fuel burn. Landing can be frustrating, and even after watching the various videos available I feel as though I’m still missing something, as I often seem to take a lot of damage mining or collecting gas, for very little gain. Alien encounters are varied and interesting, and seem to usually offer at least two alternative results.

The odds against your crew succeeding are astronomical (heh), and I’d suggest success will take both luck and skill, especially at the highest difficulty level. The game apparently includes eight main alien races, with each seed only including four of them, leading to many of the quests being different with each game. There are other minor races, too, who appear in every game. 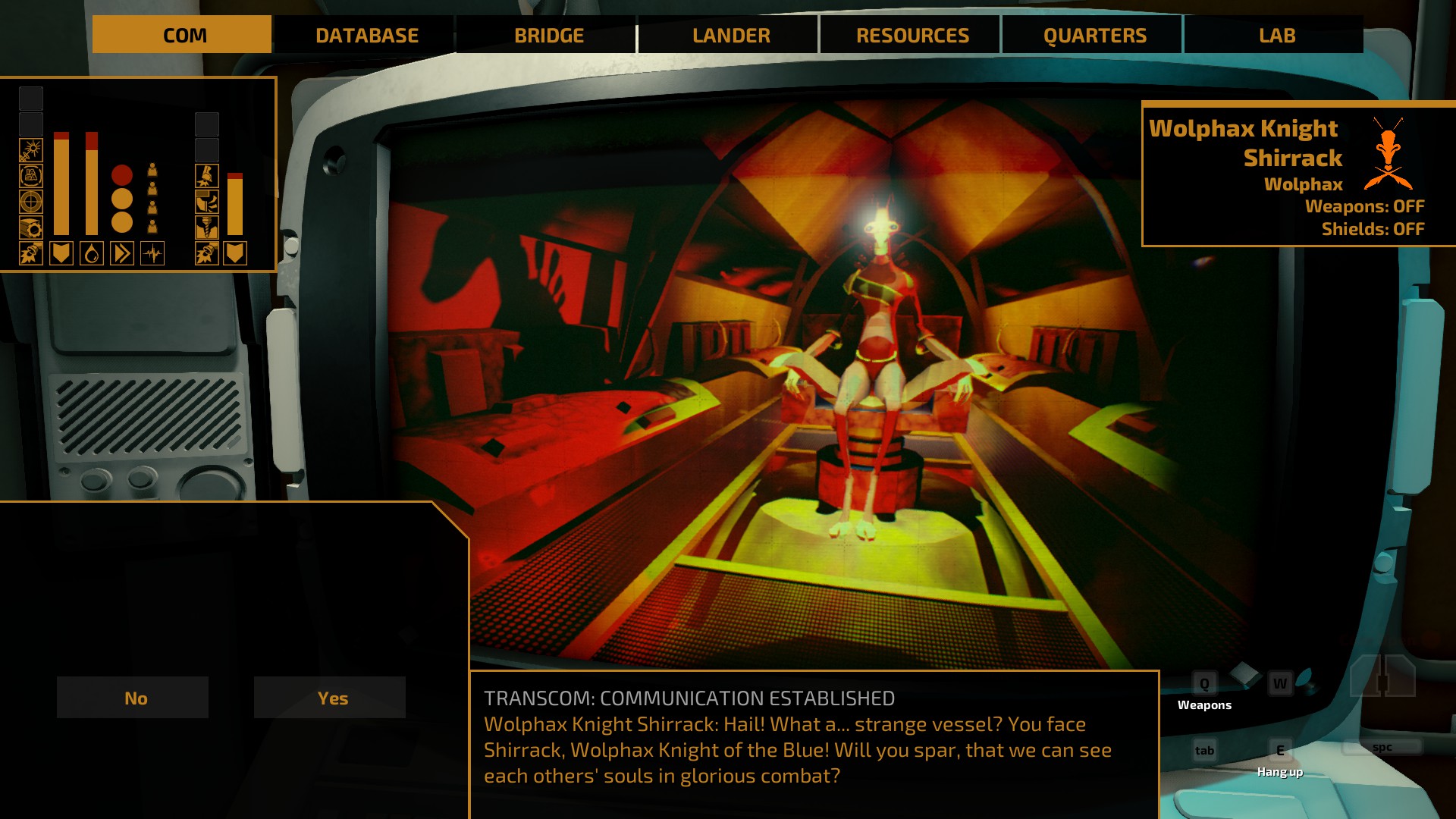 The game does have a few problems, though. Lander sequences seem to be based on attrition, with luck determining whether you’ll successfully mine enough components to counter the damage your lander will take from mining. There also seems to be no way to use relative controls for interplanetary travel, though they work fine in lander and local area modes. The in-game information for beginners is quite limited, with a title-screen link taking players to youtube videos for tutorials, and the loading times really are pretty terrible, and far too frequent. Cash is hard to come by, and I also have to wonder why my ship has a top speed of 6 AU/h in interplanetary space, no matter how much I accelerate. Oh, and it does need to be said: the game is rather expensive. 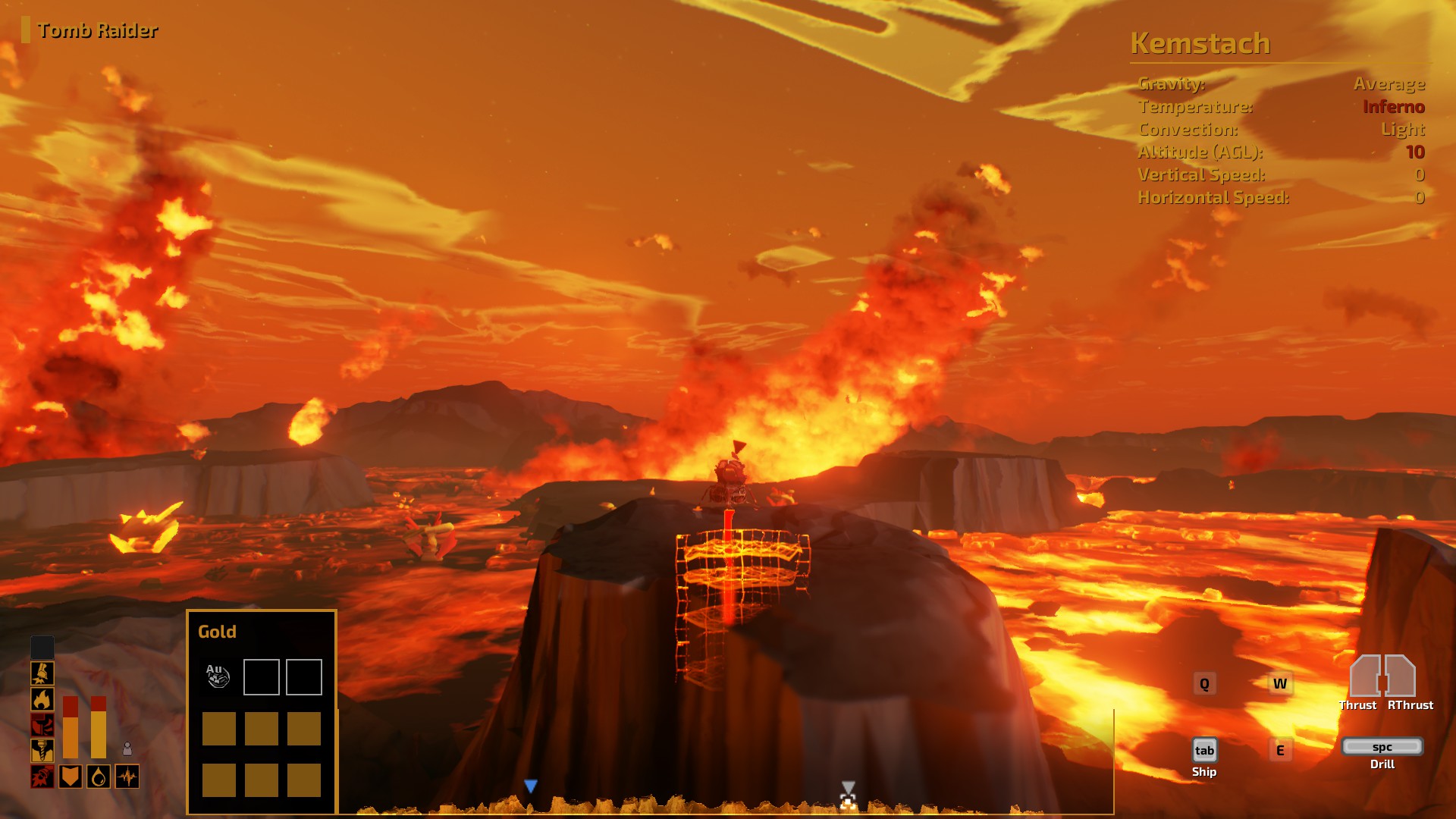 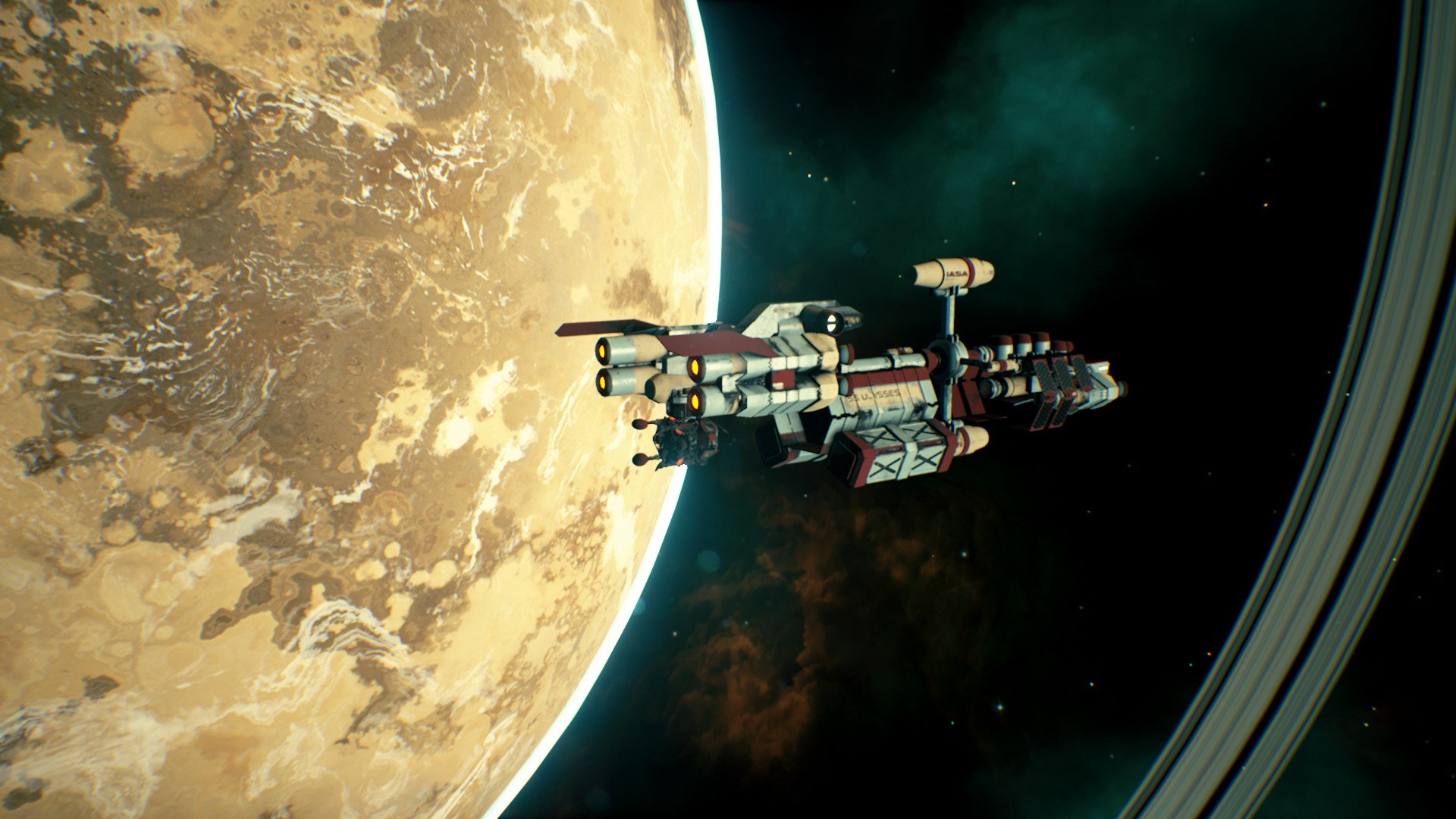 The Long Journey Home is a strange game and not at all what I expected. But that’s not a bad thing. The rogue-like elements are expertly intertwined, making what might otherwise have been a rather repetitive and boring game instead attention grabbing and addictive. The developers have done a superb job of turning relatively basic gameplay into an epic journey in which you actually feel for the characters and want them to succeed. In spite of its frustrations, I have been thoroughly enjoying playing this game.