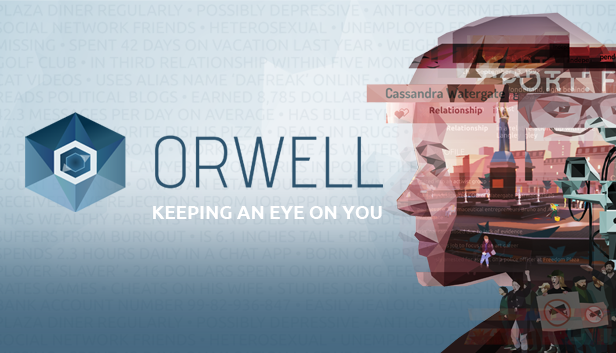 Thank you for ensuring the safety of the Nation’s people.

In the wake of a recent bombing, someone will be tasked to help investigate suspected bombers and terrorist. You are in charge of what goes in the system and what doesn’t. But are they responsible? Do you paint them as terrorists or do you purposefully leave out information?

Orwell is one of those stories that is best to go blind in, since it is the most effective the first time. Hearing or seeing anything that is related to the main story, especially the end, ruins how you would play. But why? You are playing yourself, a new recruit of a programed named Orwell tasked to investigate suspicious people regarding the recent bombing. Through, which I wished happened more, a cutscene perfectly showing why and what this game is with only visuals. If you read 1984 Orwell is similar to how the government watches their people as it was influenced from George Orwell’s books. Down to it’s core, you only read highlighted items, or datachunks, and dragging them to profiles for uploading. But there is much more if you are willing. Datachunks are meant to be evaluated, is this noteworthy to put on someone’s profile? Do you purposefully make someone look worse or better? Should you upload every little thing? The game tried to put you in this mindset by your supervisor’s comments and by conflicting datachunks (represented by a yellow highlight) to show you can’t upload every little thing. Of course, there are datachunks needed to continue. Most of the time it is very apparent the datachunk is needed as it gives something new you can look through, solve a conflicting datachunk, or a sound cue picks up. This is all combined to represent how you view the situation. How you view the people you were tasked to investigate. How you have an influence on how their life will go after Orwell injected you into their lives. Sure, they do make their own decisions, but you have the power to have them forever be seen as a threat by the government.

Your first playthrough is key. It is how you would react in this situation, not how some character would. You do not know anything except what you gather. All other playthroughs after that is to see what could have happened if you did something differently. Anything you know about the main storyline ruins how you make decisions in the game. So I do recommend knowing as little as possible to get the most out of it. I suppose Orwell is too easy. You have a supervisor meant to guide you, not only in Orwell but to guide your progress through the main storyline. It is very easy to just scroll down till you see phrases or words highlighted. Trying to find conflicting datachunks quickly to get past. While there is nothing stopping you, Orwell does try to encourage you to read. The many articles and websites you visit build the world as you continually gain access. In a way, the people you investigate brings you into the world as you unknowingly destroy theirs each datachunk at a time. There has been arguments about taking away the automatic highlighting, as why should you be hired if they have a system that does it, but there is too much that one can assume is needed. It could easily become entering random phrases or words till you get it right. So this way of highlighting does take away this confusion of what is and isn’t noteworthy in a wall of text or conversations.

There’s limited sounds to Orwell, having background music and computer sounds. The background soundtrack never really changes until something notewrothy and important comes into view. While computer sounds symbolizes actions, such as a sound of a phone for a phone call and a click as datachunks are being entered. While you do stare at a screen of your computer, Orwell has an interesting style when it comes to pictures. They build people with polygons. This gives an interesting visual that pops out when surrounded by text and brightening up the screen. The opening cutscene is one of the places that does not primarily showcase this style, going for more of an shaded outline. While the visuals are minimal, it does look appealing.

Orwell easily runs well. Only having a few seconds of loading in the beginning of each chapter to load everything. There also seems to be a rare bug, not allowing the player to drag or view the preview of the datachunk. Thankfully, the datachunk is not needed to continue with the story, as it persists through the save, so it may only bother those who view it as an important datachunk to include in a profile. As said before, Orwell thrives on the first playthrough. After that, you know what’s going to happen. You know what choices affects those you were assigned to. That first playthrough may be remembered as you replay, but so everthing major to the story. This is where you should look up guides as more playthroughs are solely for achievements that were off of the course you took. There are a total of three offical endings, all having subtle changed down the road. There’s not much replayability but to see the difference the decisions have on the suspects. – The phone calls and texts are either too slow or too fast. You have to activate the certain call/text for it to start, breaking immersion since no one will wait till you come into the picture. If you are fast enough you can get two calls or texts (or a combination of the two) at the same time since you are likely to look at something else during other playthroughs.

Orwell is one of those must play games. With the close hitting theme that may soon become reality. With all chapters released, you can easily have 2-3 hours of gamethrough per playthrough depending on how you choose to play. Orwell shows that you are being watched in some ways, even now, and that even you won’t have the best interest for others if they have the possibility to be threats to society.