Grave Danger is a 2D platform puzzler, for single-player or local co-op, where you control 3 characters, each with unique abilities. 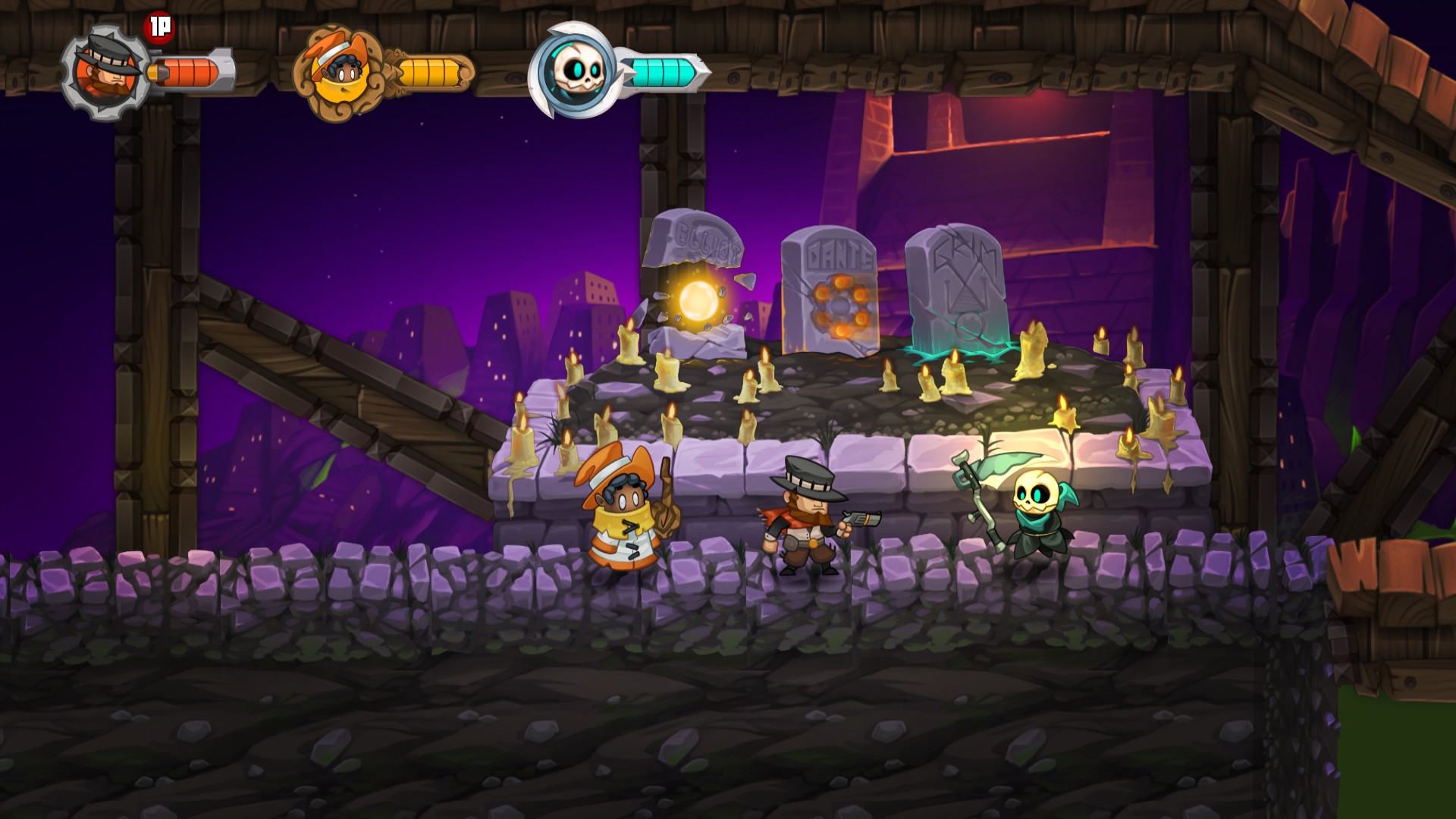 Dante the cowboy can climb walls, Malice the Grim Reaper can glide to cover wide gaps and Elliot the wizard can double-jump to the high spots. As you progress along the level each character has to gain access to pressure plates, switches, dynamite etc to open up passages for the others to eventually reach the exit. Of course, the combinations of these things become more and more complex. At the start and end of each level there’s always a short conversation between the 3 protagonists, and sometimes the evil characters who appear, to progress the storyline which involves baddies who have taken over the bakery and are plotting dastardly deeds. It has a distinct Scooby Doo vibe. You get fabulous lines like “overclocking the magical sweetness infuser”. Brilliant!

It can be played with keyboard/mouse but I would highly recommend a controller which feels natural switching between the characters and using their special moves. 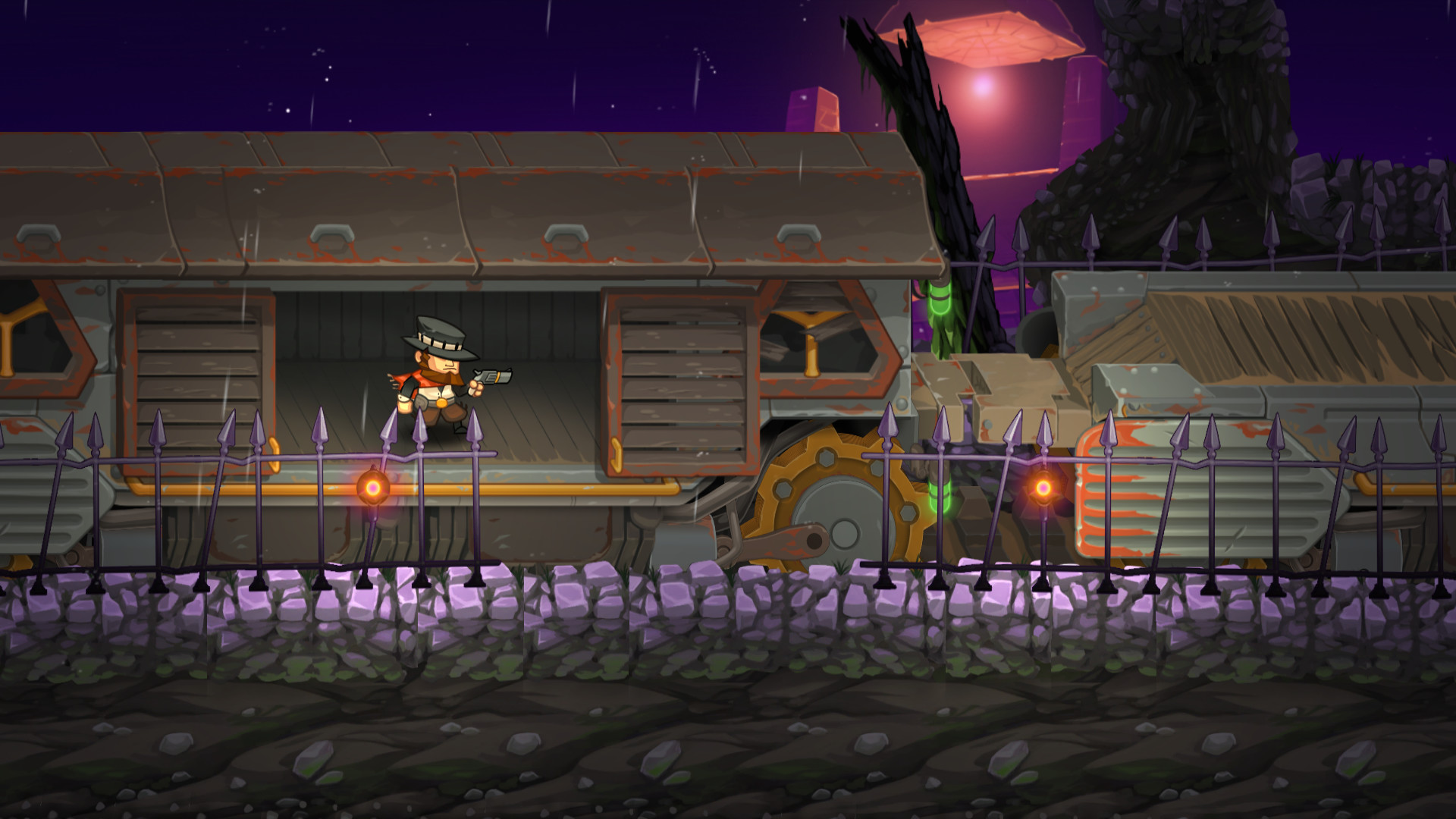 When one of your characters dies everything turns grey and your ‘ghost’ gains super movement, letting you to roam around the level wherever you like which allows you to plan your route and try to work out the best way to solve the puzzle. Once you’ve done that, you go back to the last graveyard you reached where you’re resurrected to carry on with your pals.

There are enemies all over the level that drop food items which you can pick up to replenish your health. These enemies respawn if you die or there are no other players near them. People have said this can be annoying, but they are generally quite easy to kill, and it’s fun to keep killing them while you try to solve the puzzle. It gives you something to do instead of just wandering around trying to find the next switch. 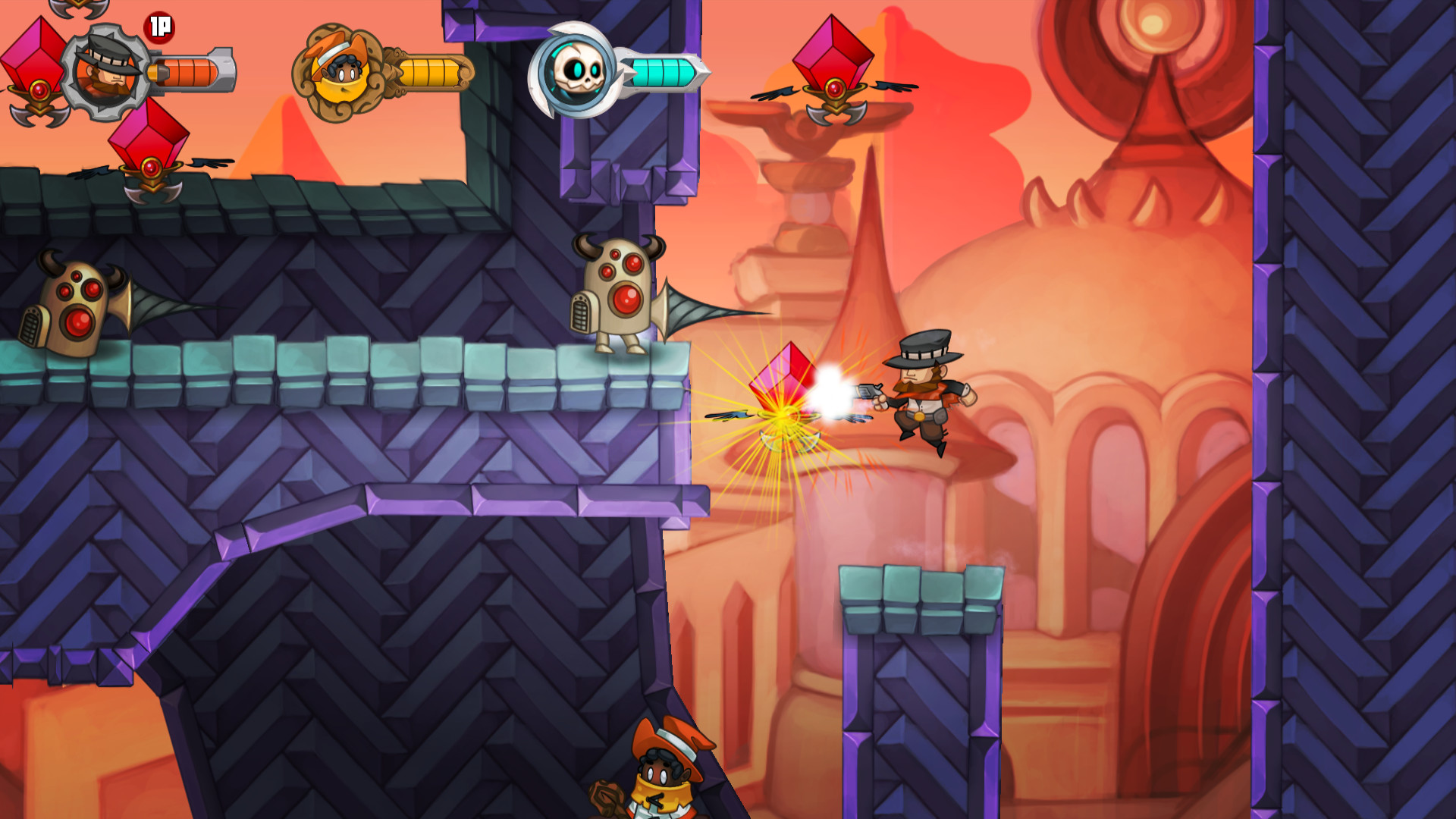 This game will inevitably be compared to Trine since it works on the same concept, but it’s a totally different beast. Both have a storyline but where Trine takes itself quite seriously, GD is full of fun and cheeky wit. Trine is physics based and because of this there can be many ways to solve the puzzles, with or without all three characters. GD is pure platforming, no physics. There’s only one way to solve the puzzle and you must use all 3 characters at different sections of the level to achieve it, by taking it in turns. For me, this makes it the better co-op game of the two because everyone has their part to play.

Runs smooth as silk on both Windows and Linux. No problems at all. The hardware requirements are low so I suspect this would run well on a potato-class computer. 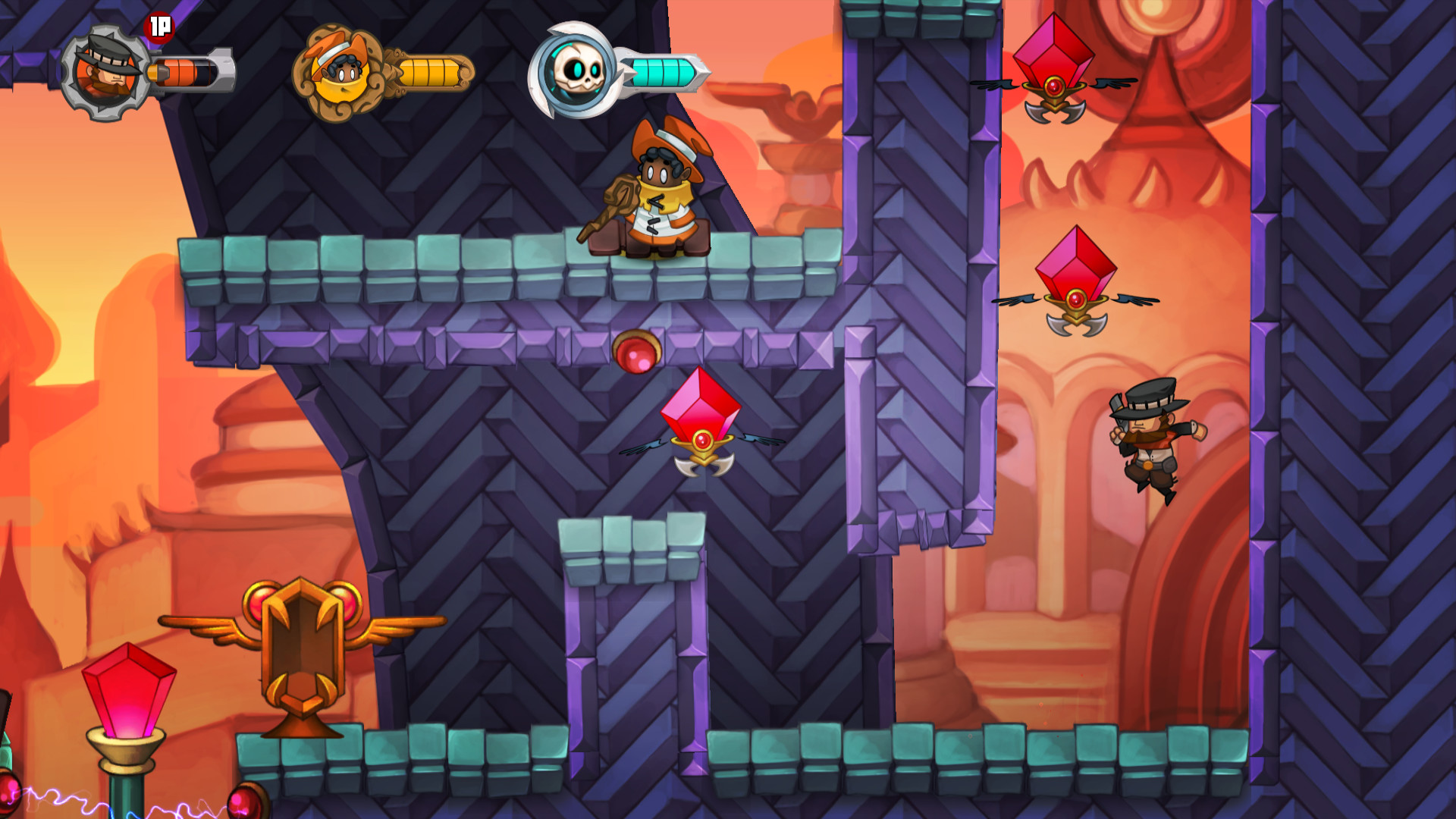 There is a wide range of difficulty, and I started to struggle exactly halfway through the game which shows a perfect balance. The scoring for the levels are based on the number of deaths, so you can repeat and get to know the level until you reach ‘S’ grade. To get the ultimate S+ grade you have to speed-run to beat a specific time and also collect all the Wanted posters which just became a thing in the latest update. 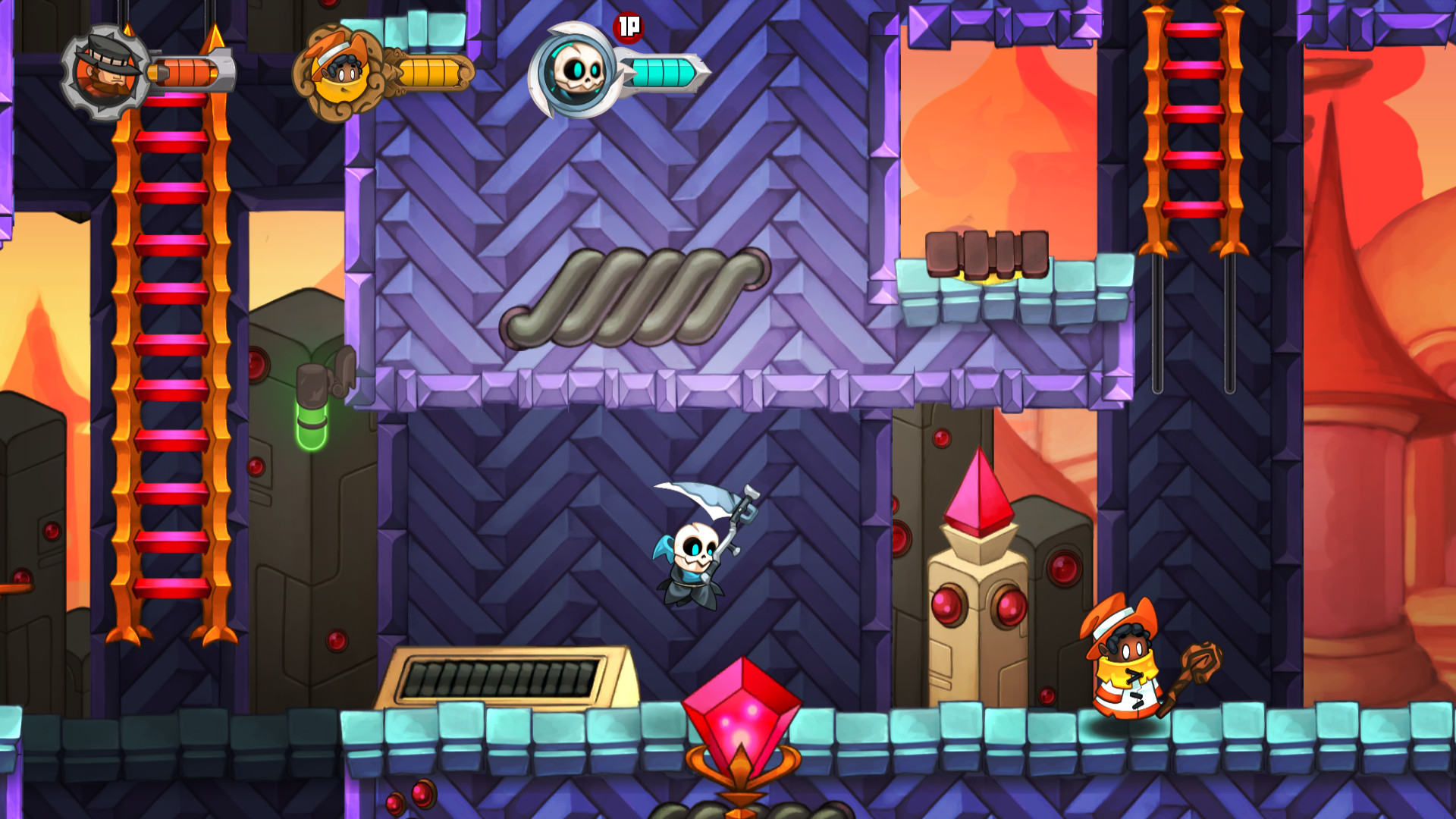 This is where GD really shines. The cartoony graphics are bright, colourful and fun. There are so many enemies and food items to enjoy and collect via achievements and it’s all accompanied by a catchy background tune. One detail that never gets old for me is they way they do a little burp every time they pick up a food item.

The achievements for this game deserve a special mention. Most of them are gained after picking up a certain number of food items and they pop up at satisfyingly regular intervals in the early game, with wonderful names and artwork. Others are at the ‘hard’ end of the spectrum of the game involving speed runs and Wanted poster collection. Easy to get most, hard to get them all, the way it should be.

No trading cards yet but at this price point I don’t think they are the reason you would buy the game.

Steam cloud, which I can confirm works cross-platform. Nice. 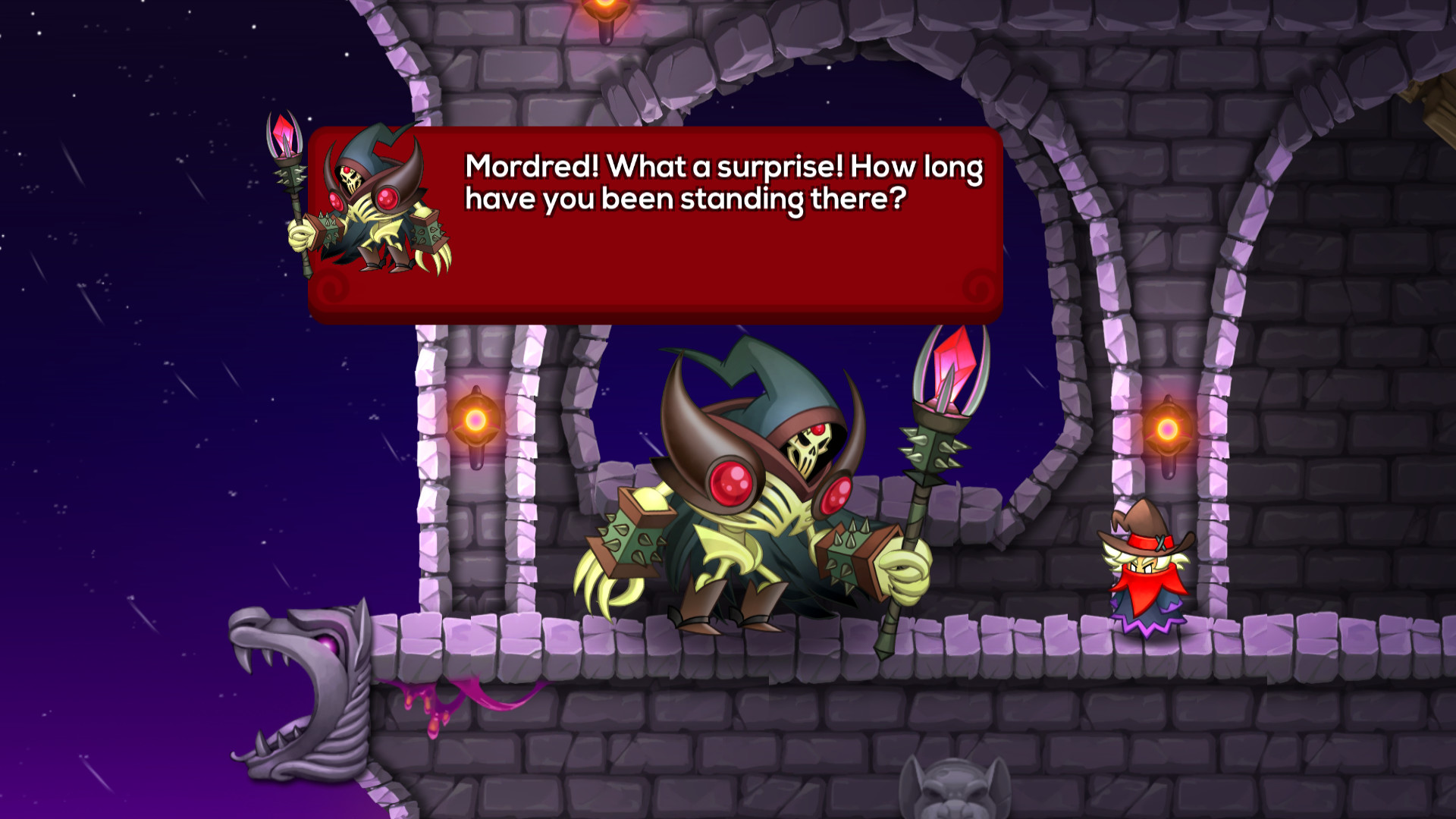 You’ll definitely get your money’s worth here, even at full price. It’s a high quality game with plenty of challenge and replay value.

This is a perfect puzzle platformer. I don’t have a bad word to say about it. It oozes quality and fun, with steady difficulty progression leading to a hard challenge in the later levels. I’ve never seen a better game to play with your kids. Great for adult single-player too.