Rad Rodgers aims to pay homage to the 2D shooters of the old times with a fresh new coat of paint. Does it make the gamer fall in love with its world, or force them to smash their computer screens? Let’s find out… 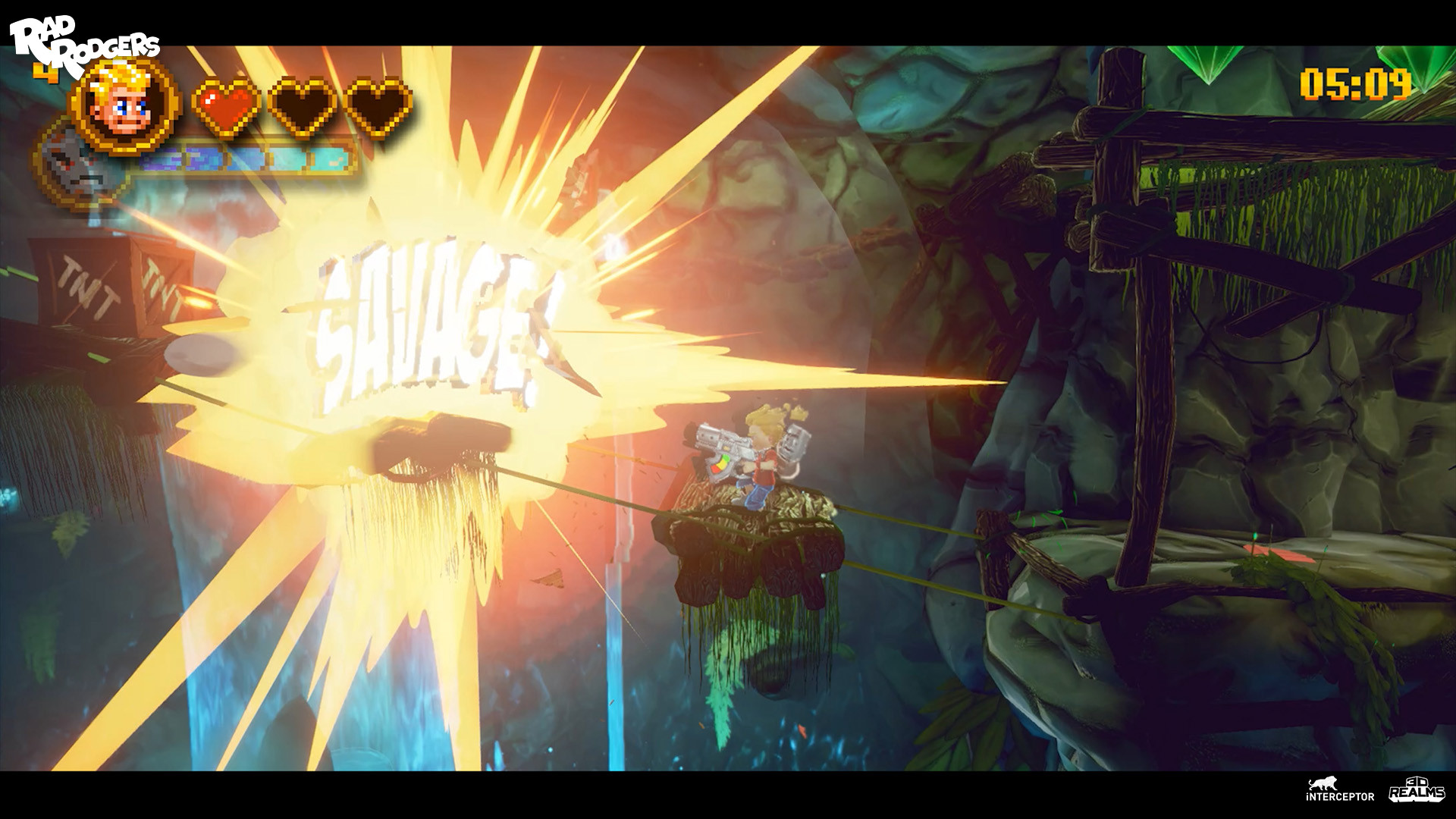 Rad Rodgers puts you in the shoes of Rad, a ’90s teenager who loves to play video games. One day when he’s playing till late his mother gets angry and tells him to unplug the console. Being the typical teenager he doesn’t listen to her and she ends up unplugging the console. When he starts to head for bed his console sucks him in and transports him to a magical land with his console turned into his pal named Dusty who gives him a weapon and tells him to begin his adventure. What I really liked about the first bit was the fact that there is an achievement present which unlocks when you skip a cutscene. I love the way it poked fun at modern video games in a very subtle way. Rad runs and guns through seven stages where he has to collect four exit chunks and open the exit. In the midst of them are some sections which feature Dusty and the pixelverse, which are much more fast paced and kind of different than your usual sections. 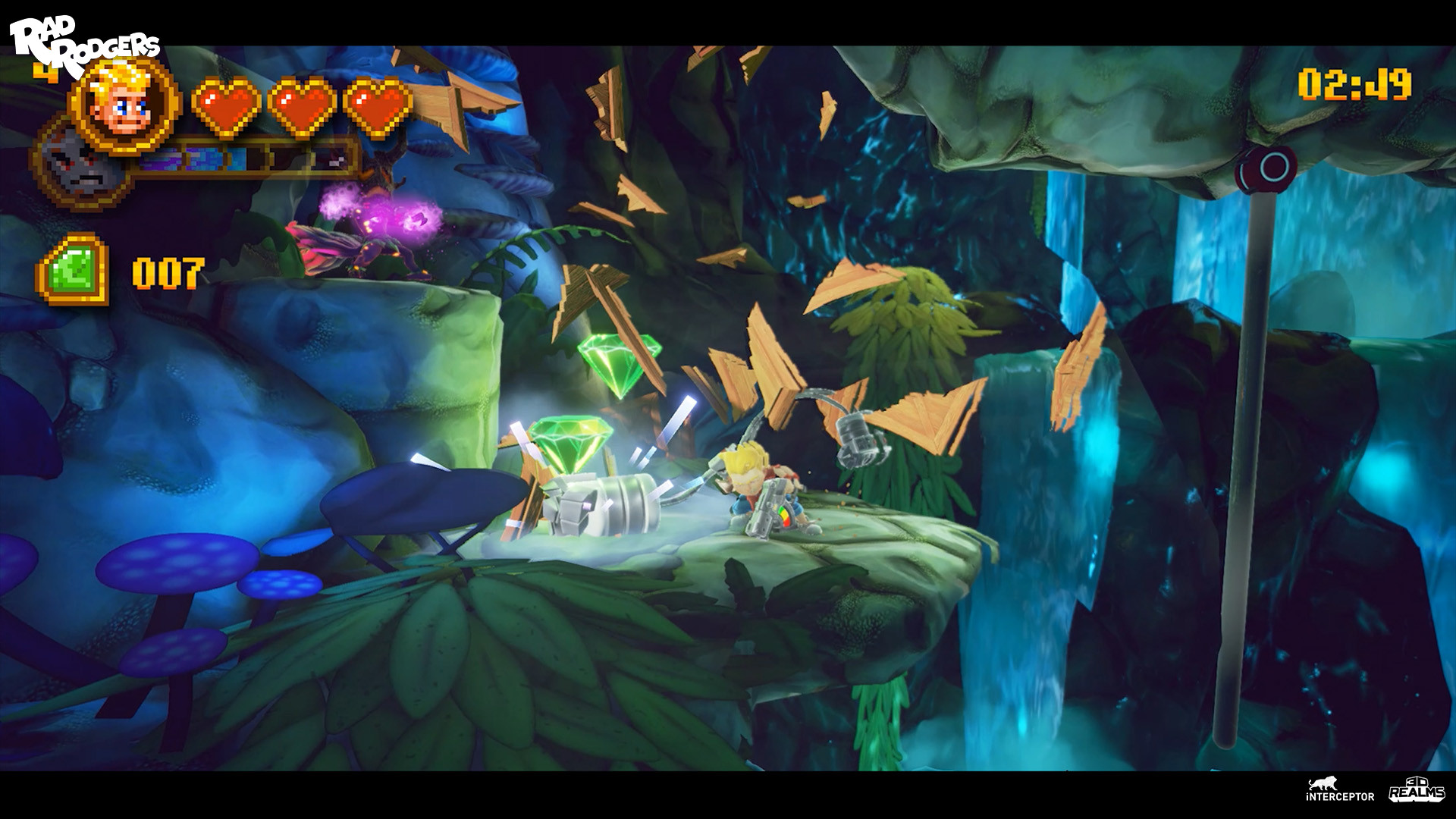 Rad does not have much variety in terms of weapons though, as there are only the usual basics like the flamethrower or a minigun being given to you in the later levels. In addition to this, Dusty has a melee attack which is mostly beneficial for solving the puzzles laid out in front of you. Rad Rodgers: World One has a surprising lack in the variety of enemies and the level design though. It takes two levels to know that you are doing the same things over and over again while the background changes. The platforming sections are simple and the puzzles are not much of a mind bender. Another problem I found in Rad Rodgers: World one was the final boss battle. Up until that battle I breezed through the game but the final boss seems like a huge difficulty spike. He sports a huge amount of health, and if you get killed the pickups don’t spawn back. The boss battle is a big speed breaker in what is otherwise a fast paced game.

The characters in the game are mostly funny and remain relevant for some time. Dusty’s jokes fall flat after some time and it isn’t helped by the fact that he keeps repeating the same lines over and over again. The plot is throwaway and doesn’t manage to keep your interest for long. The shooting feels great though and it’s a blast to just massacre the enemies in your path. Rad Rodgers is also very short for what it is. The seven levels are each 15-20 minutes long and it is not helped by the fact that most of them feel the same. Ultimately, Rad Rodgers: World One is a nice game which makes good use of the age old mechanics. 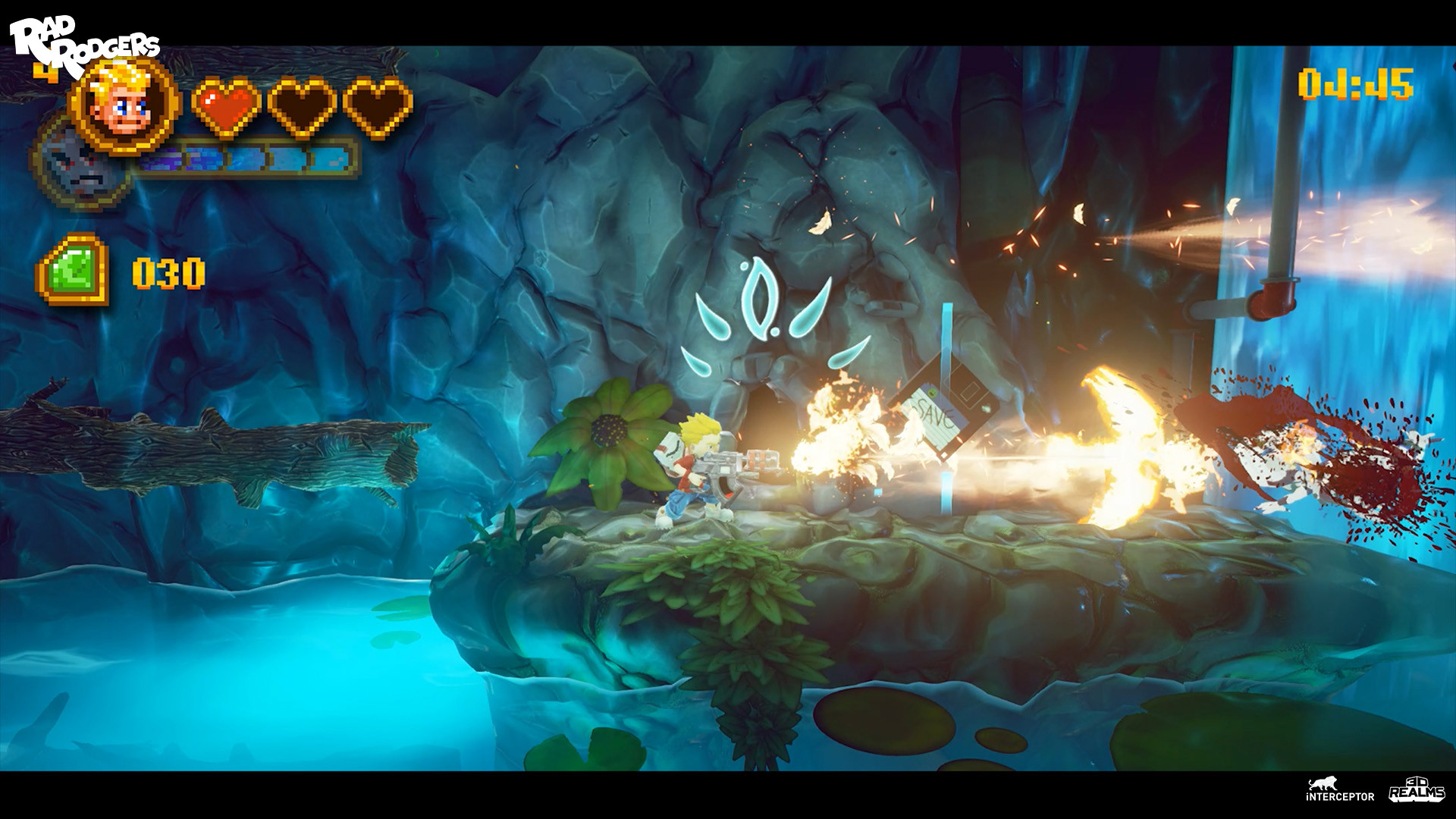 The visual design is where Rad Rodgers shines. From the bright and colourful cutscenes to the equally splashing world in which you are playing, Rad Rodgers never takes a step back in the graphical department. The animations are fluid, the weapons create a visual splash on the screen, the bright red gore looks fantastic and overall there are a lot of colours splashing onto the screen in each and every frame. The character models also look great and are just a delight to look at. As I mentioned earlier, even though the levels are not much different in terms of their design, the backgrounds look so lively and colourful that I couldn’t wait to see what else I was gonna see next. Overall, Rad Rodgers: World One has a graphical art style that I have not seen in any game since Ori and the Blind Forest. 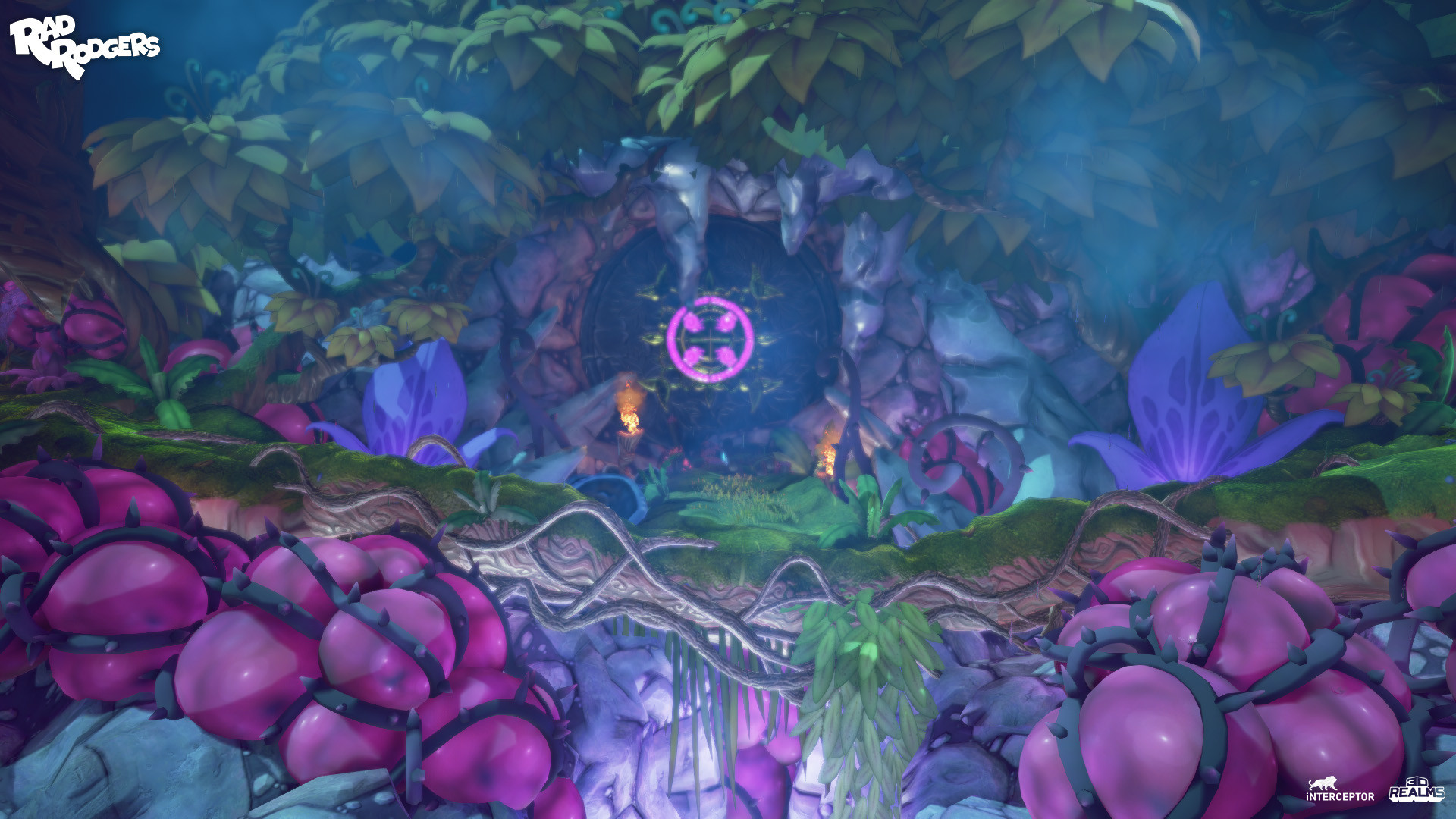 Rad Rodgers: World One features a wonderful soundtrack which goes along with its visuals pretty well. The main sound loop itself is pleasant to listen to and there are a lot of little tunes to go along with it. The beats complement the game very well and lend to building a solid environment. Overall, Rad Rodgers has a really nice soundtrack. 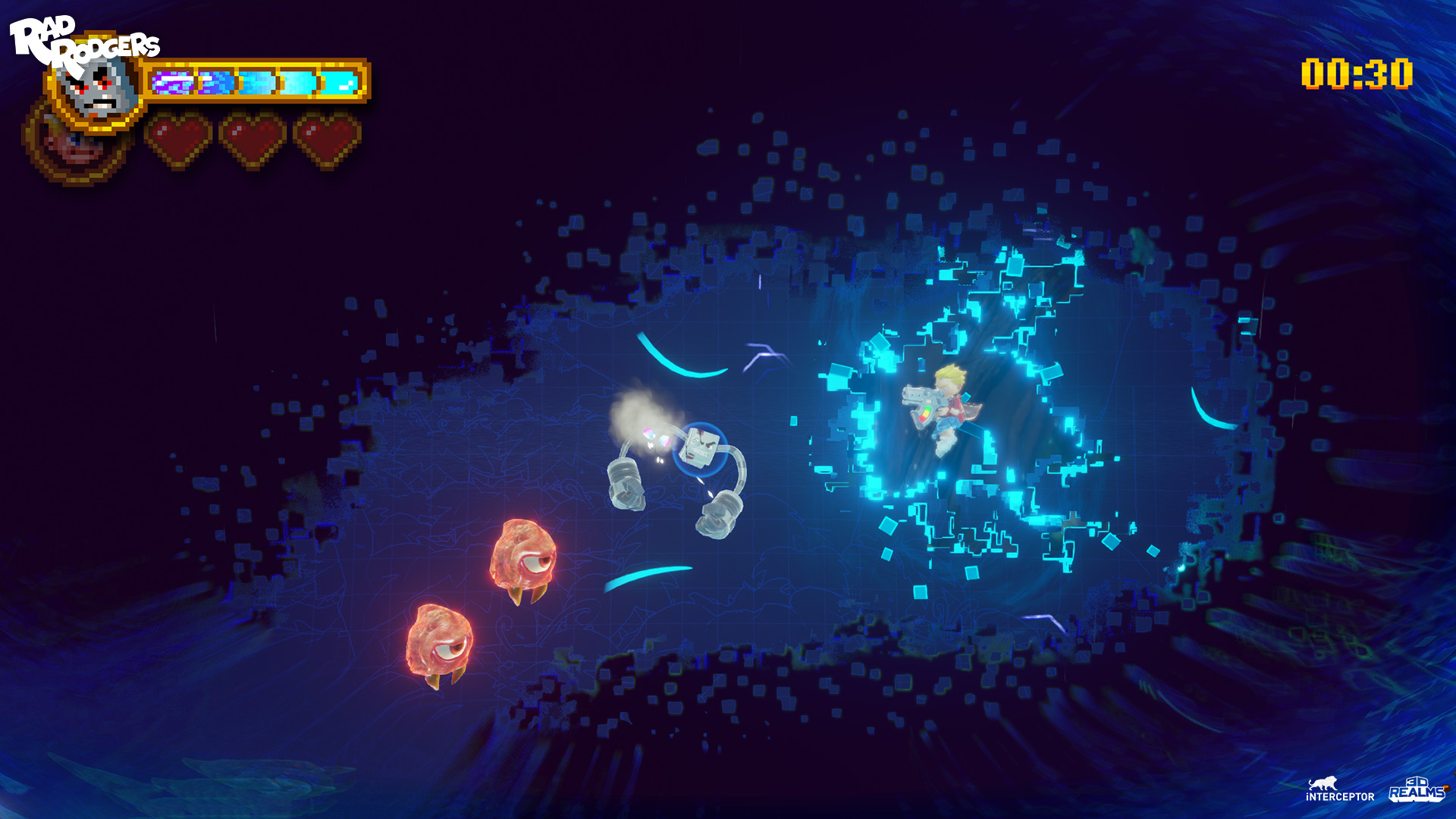