Runbow is a 9 player party platformer action game which has some cut throat multiplayer battles. Does it race away to victory against its other competitors or gets sweeped across in its own colours, let’s find out: 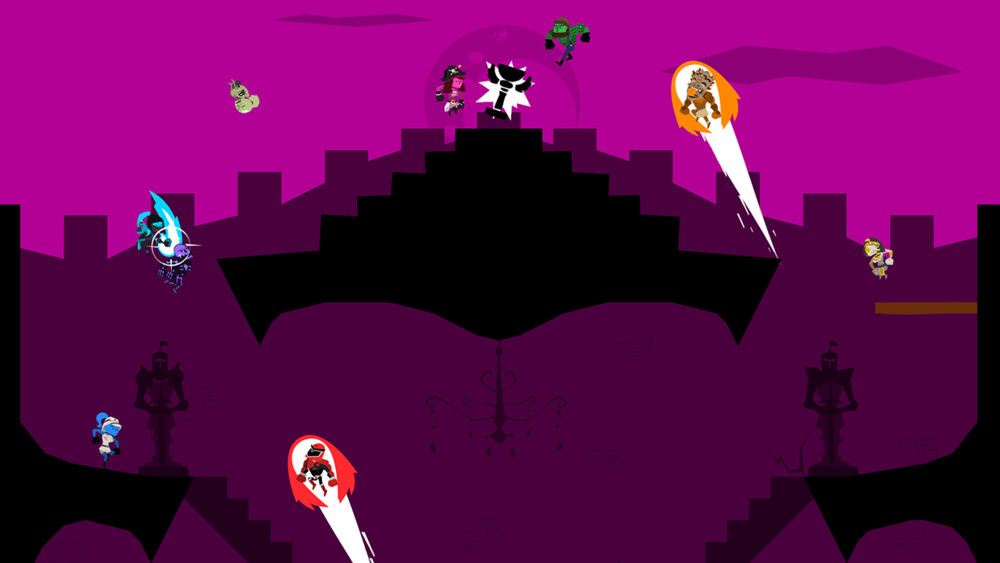 Runbow tasks you with a very simple job, run and reach the end before any of your friends do while trying not to fall down or get steam rolled in the way. Each game is pretty short too, lasting a minute or two. If you die One game that instantly came to mind while playing Runbow was Speedrunners. And it’s hard not to compare the two, both of them having similar gameplay and a similar type of target audience. Runbow has a very interesting mechanic that keeps it different from other games. Every few seconds, a wave of colour sweeps over the screen making various objects and platforms appear and disappear according to their respective colours. This makes for a very fun and refreshing change as you have to be on the lookout for colour pause at the start of screen every time the sweep happens. It is incredibly frustrating when you jump for a platform in reach but the colour changes just in time so that you fall down to your death instead of making a perfect jump. This mechanic is used everywhere, from the waterfalls to the lasers, with even lasers disappearing in a particular set of colours. Leave its pretty visuals aside and Runbow is a very difficult game. You will die early and quickly if you don’t observe your environment enough. Runbow needs you to stop dead in the tracks and watch how different colours change the obstacles ahead. You also have to watch out and punch and smash your teammates to get them out of the equation. This makes all the difference between winning and watching a skull sarcastically pointing out your mistakes every time you die. 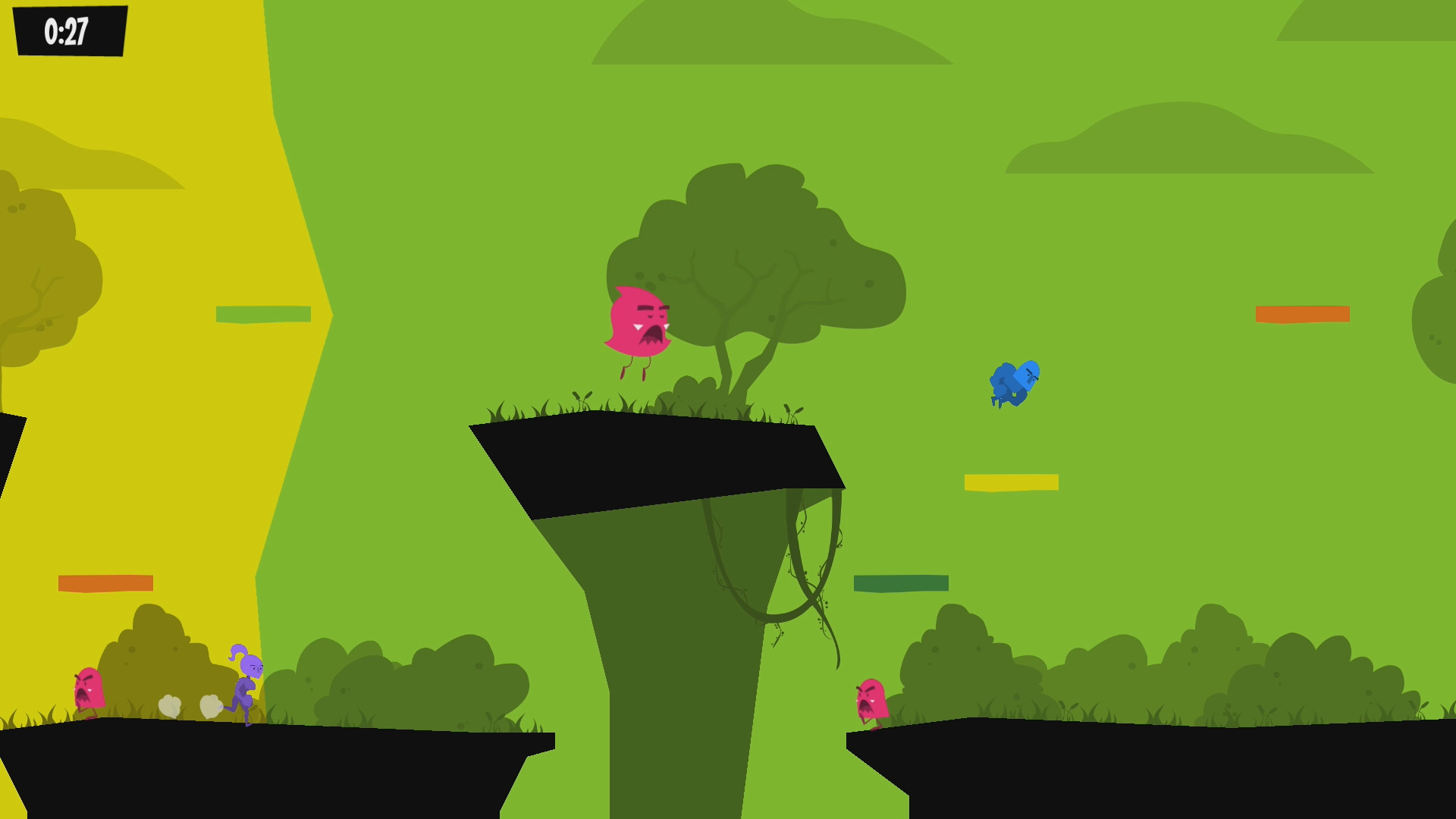 While Runbow is a blast to play with friends, its solo play is very lacking from the get go. There are no bots available for playing solo which is a big dealbreaker. To make up for this, Runbow features a number of game modes including Adventure mode, where a black and white character feels a bit left out of all the fun and colours going on with the characters. King of the hill and arena mode are reminiscent of Super Smash bros where you try to make other characters fall down from the platforms instead of running to the end. There is a lot of customization available here for the characters too where you can select their colours, hats and a plethora of other things.
All of this still feels lacking when you are playing solo. Without anyone else on the screen, Runbow’s world feels very empty since it’s not designed with that sort of gameplay in mind. The maps are somewhat randomized every time you play so it doesn’t feel as repetitive. Runbow’s pc porting has been decent. The game feels better and easier to play with a controller than with a keyboard. There is an option to change key bindings which is a godsend as it’s default key controls are the weirdest I’ve seen to date in a platformer. There are also a few bugs here and there but nothing gamebreaking. 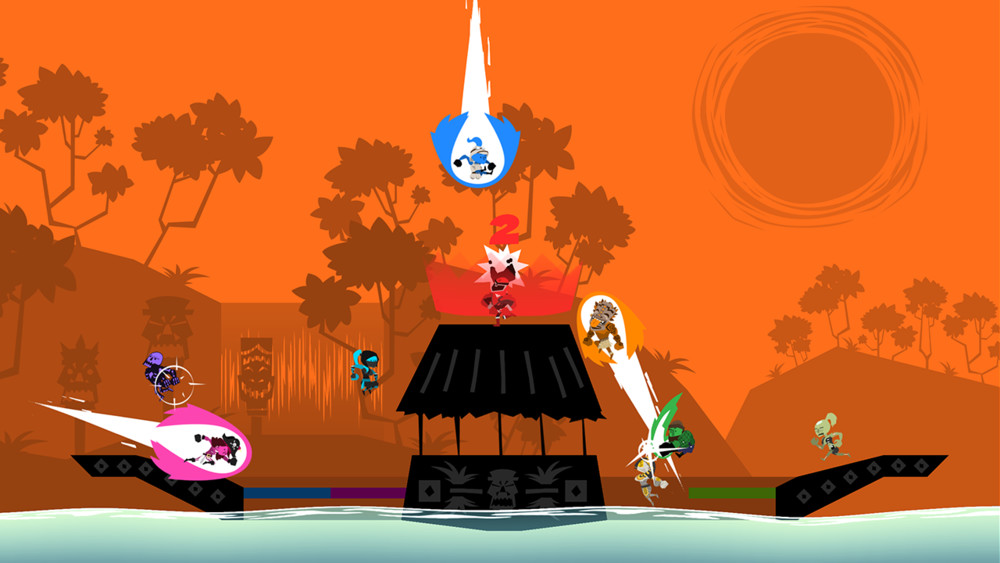 For a game based on colours, Runbow feels a bit bland when you fire up the game for the first time. There is a drab green background and everything that is an object is made up of black. Slowly though, the game grows on you. When the colour sweep happens the colours truly pop out and give a soothing effect on the eyes. Some parts like the waterfalls are also very well done and there are fluid animations for everything. The cutscenes are colourful and are done quite nicely. Overall, Runbow stays true to the name and provides a lot of colours in each frame.

The sound design of Runbow is excellent. From the thumping soundtrack to the taunts that your characters make, everything compliments the environment created by the visuals. There were a few audio issues here and there but I hope they will be patched soon enough. 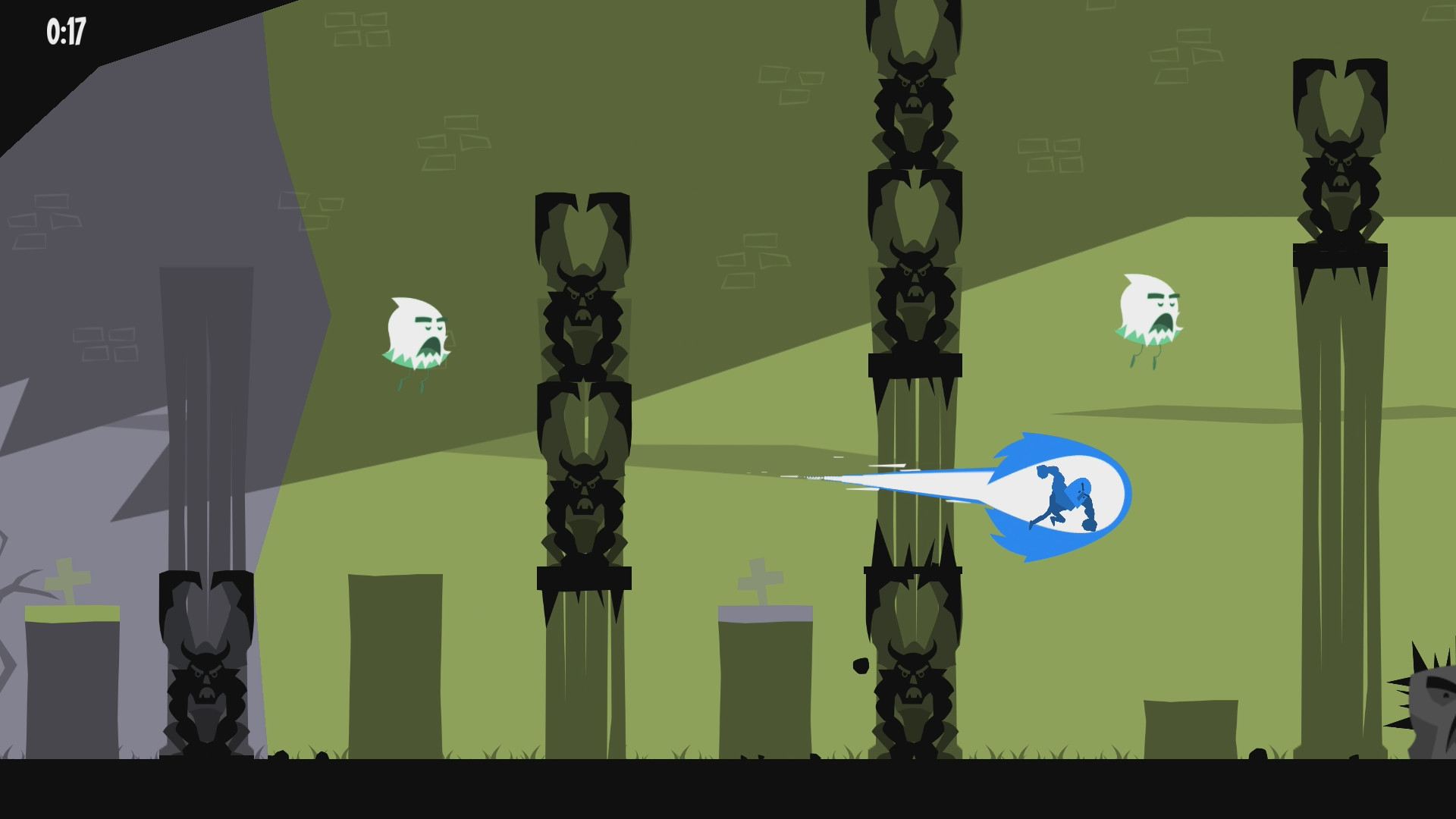 Runbow is made to be played with friends. If you’re expecting decent soloplay then you won’t find it here. There are a lot of game modes available but none of them are built so that you can play it alone. The lack of bots is really frustrating but once your friends arrive on the couch it is a completely different experience. Runbow is like a more methodical and slower version of Speedrunners with a huge emphasis on colours and how they affect your surroundings. If you are looking for a game to play with your friends, you can give Runbow a try.