Draw Slasher is the unique demanding and dynamic action packed beat’em up you need only a mouse to play. Cut, slice, snip, sever, chop, shear and trim hordes of Pirate Monkey Zombies. 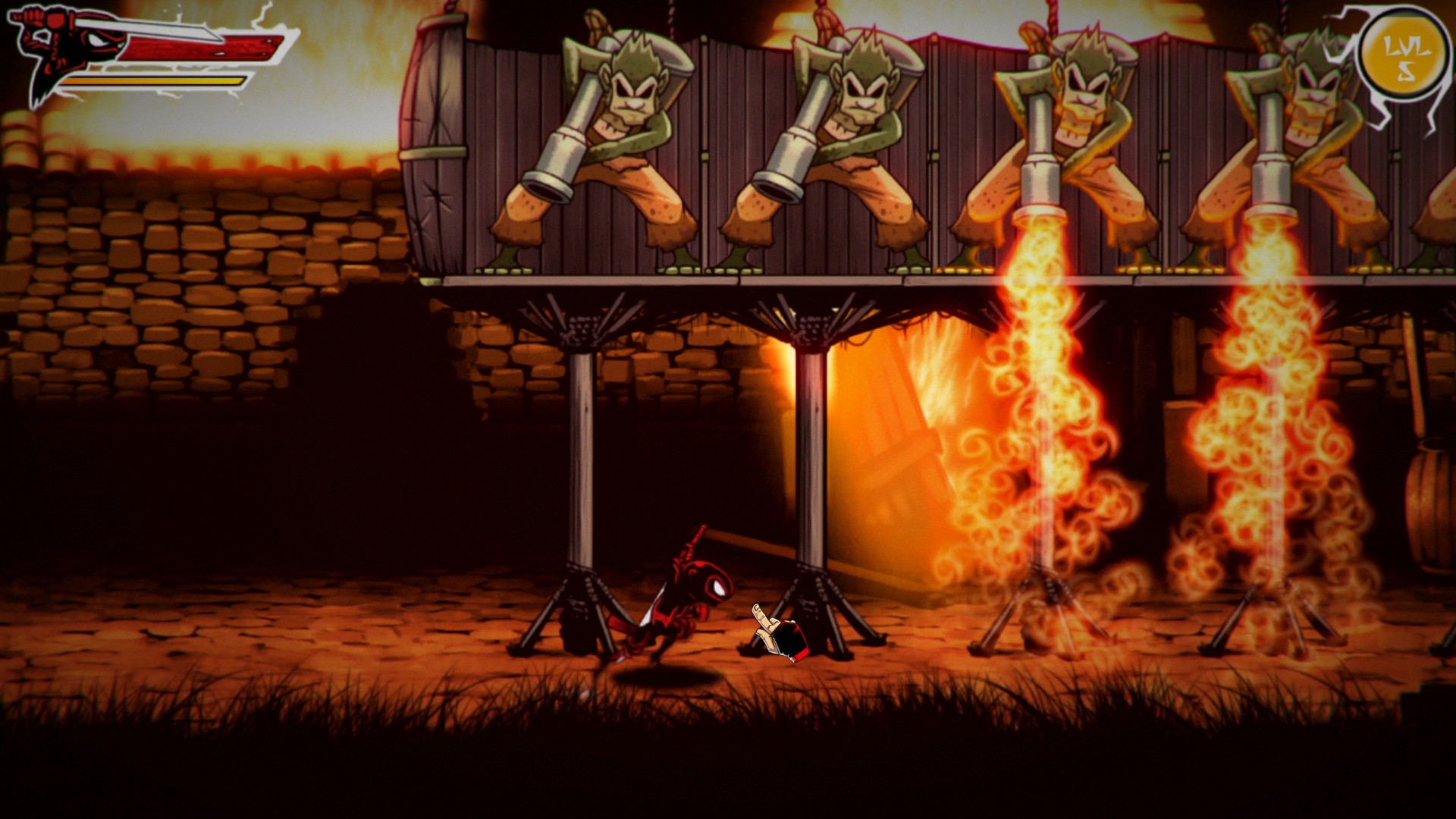 You know a game’s gonna be hard when you’re having a helluva time just making it through the Tutorial. Fortunately, Draw Slasher is one game whose novel mechanics you can gradually get the hang of, and for a short while thereafter you might even fool yourself into believing you’re pretty good at it. Don’t get too cocky, though. Get your guard down for more than a second, and this game knows how to hand your arse back to you, in several more pieces than it started.

Even the so-called “Easy” mode will give you a run for your money, especially if your hand-eye coordination and reflexes are as dodgy as those of the person writing these words. But rest assured: persistence can pay off, and it’s in the personal rewards department (y’know, pride an’ all that stuff) that Draw Slasher truly pays off. Almost every new enemy requires its own strategies to take ’em down, e.g. attack them only from behind, look for the chink in their armour, etc. Learning each of these strategies, then becoming increasingly competent at executing them, is enough to convince even the crappiest of gamers that they can make it one checkpoint further (and maybe, just maybe, get past that pesky boss once and for all). 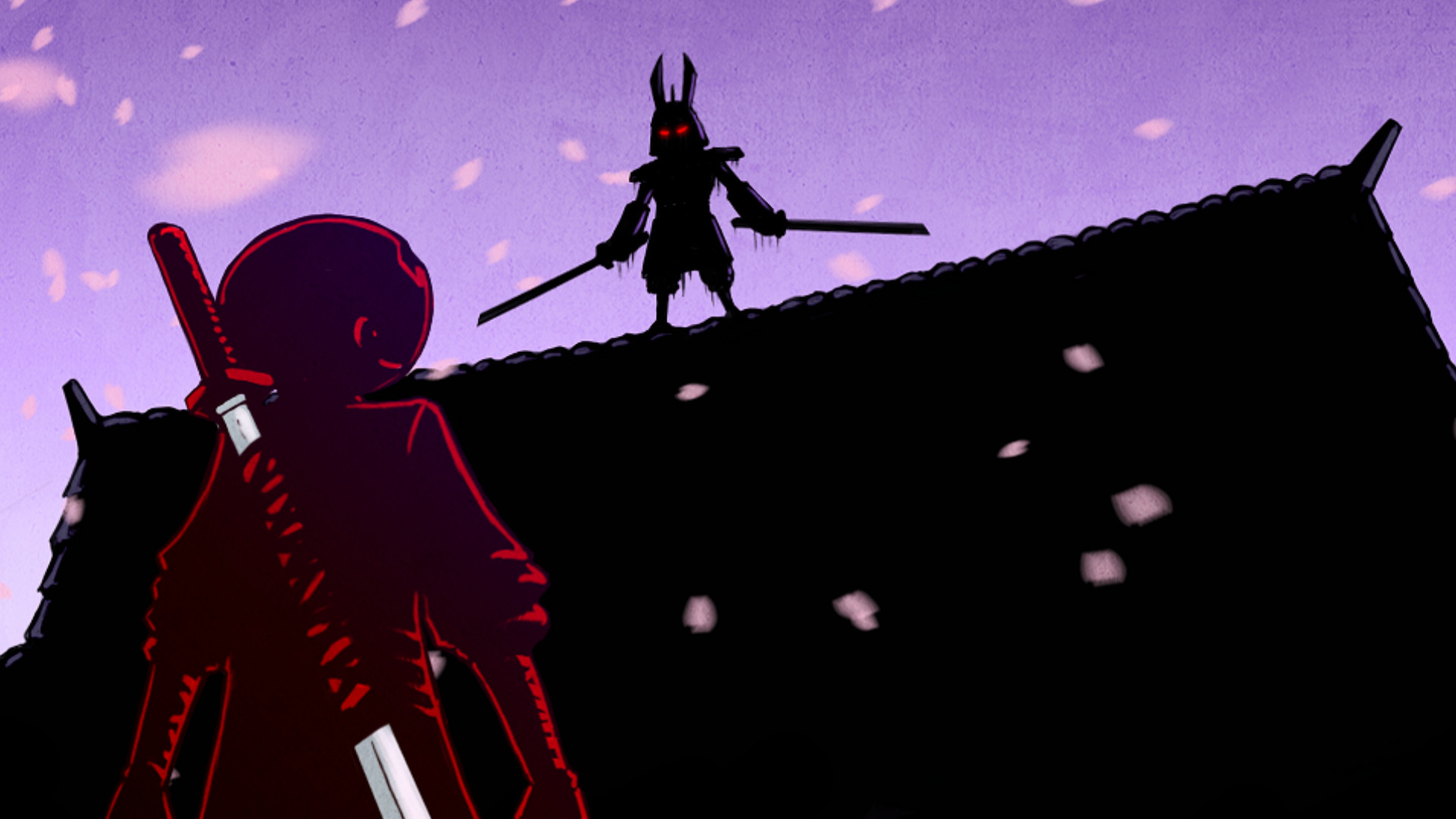 I’ve mentioned the mechanics, but have yet to describe them. One of the great “gimmicks” of Draw Slasher is the fact that it began life as a mobile game, and while it shows, it still translates surprisingly well to PC. All of your ninja’s nifty moves are executed by moving the mouse whilst holding down the left button, “drawing” the path from where your warrior begins his run-up to where he ends his mighty slashing blow against the foe (which can zig-zag through an enemy and thereby ’cause them multiple blows with a single strike, earning combo bonuses and so forth). It’s both simpler than it sounds, and much, much harder to MASTER than it sounds. Like all clever mobile games, though – Plants vs. Zombies being another excellent example – its success ultimately lies in that very paradox of deceptive simplicity versus actual difficulty.

Oh, and you do get to use the right mouse button occasionally too, but only to summon up special enemy-obliterating “ki” powers, which you earn by killing bucket-loads of baddies. So yes, it’s a fairly traditional “arcade” game in many ways, with enough of a twist to make it something fairly fresh and modern in its own right (with all due credit to the influence of Fruit Ninja, which the game itself cheekily acknowledges in one sequence). 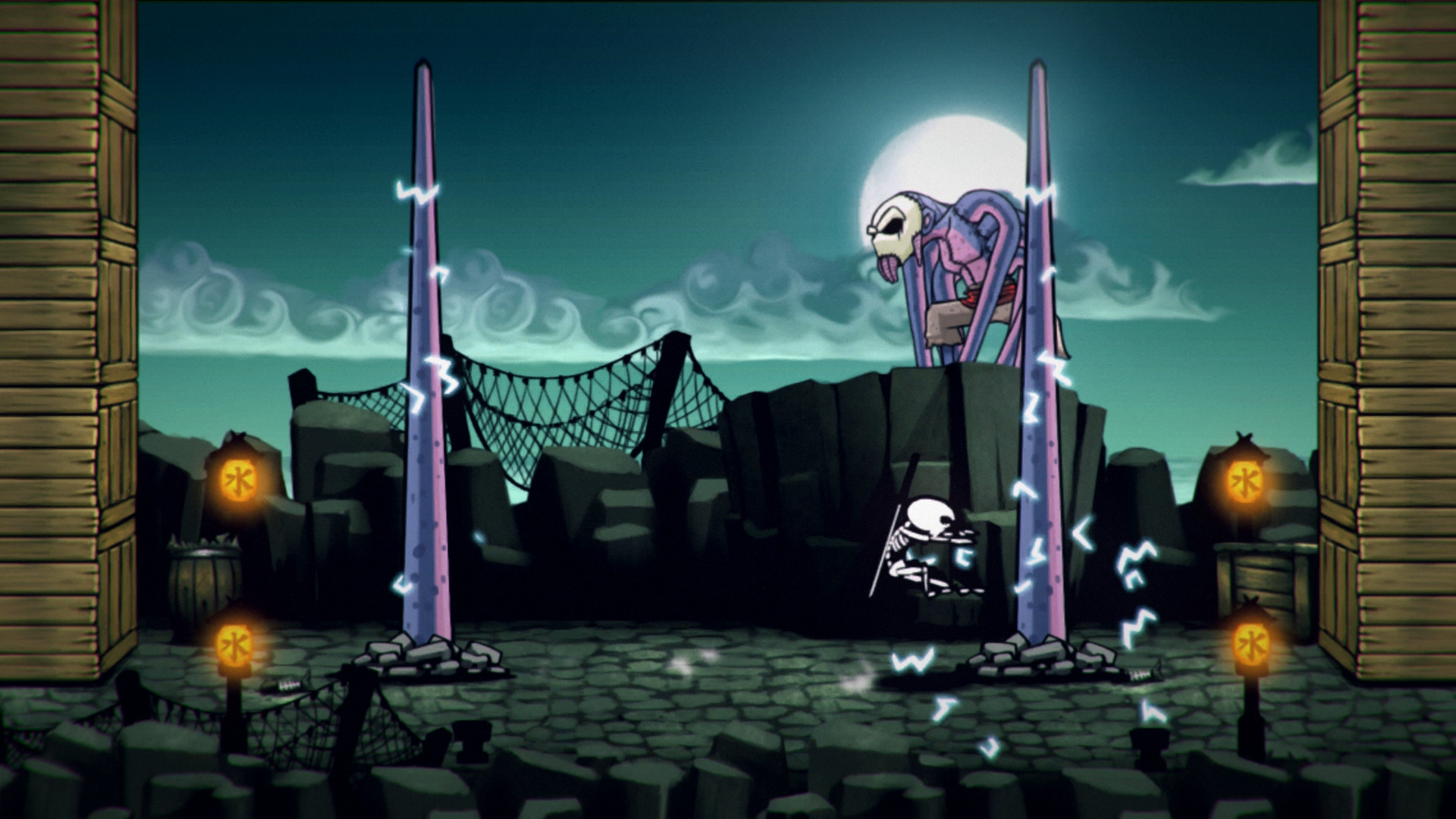 Okay, so it’s a tad repetitive. Like many a side-scrolling arcade game before it, new enemies are only unveiled sporadically, though the thoroughly unique bosses are frequent enough to keep even the nimblest of ninjas on their toes.

Not that the bosses themselves don’t get “old” quickly when you have to fight them over and over and over again – I’m looking at you, Mr Cannonballs – but at least the game allows you to go back to the beginning of levels while still retaining all the experience you’ve accrued…so even if that early-ish boss is proving too much for your meagre skillz, you can at least re-confront him with more health and/or stamina than you had the last time (after you grind all the way back to him, of course)! 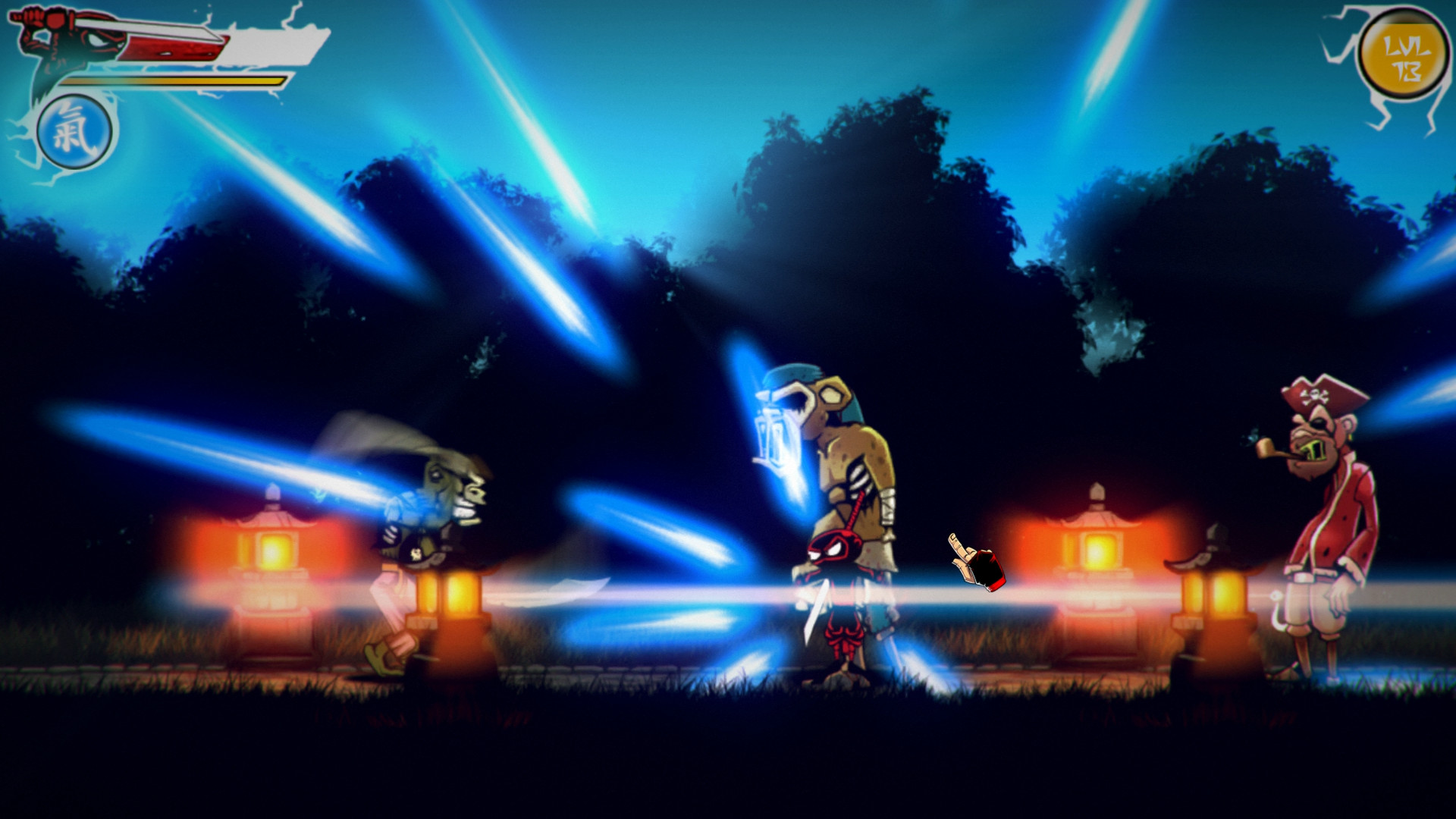 One major downfall of the game is the fact that the difficulty curve of the levels isn’t quite incremental. The fourth boss, for example, is basically an EASIER variation on the second: one throws cannonballs which you have to dodge in real time, while the other merely plants stationary bombs for you to jump over. Quite why anyone would find the latter more challenging than the first, I have no idea. I think I beat bomb-boy on about the second try, while Mr Cannonballs killed me at least twenty times or more.

And no, it wasn’t just that I was better at the game by that point, nor that I had higher health and stamina through the leveling-up process. It’s simply the fact that I could take my sweet time leaping over the bombs, as opposed to panicking when two or three cannonballs were thrown at me in quick succession. So the level design does, unfortunately, leave a little to be desired. 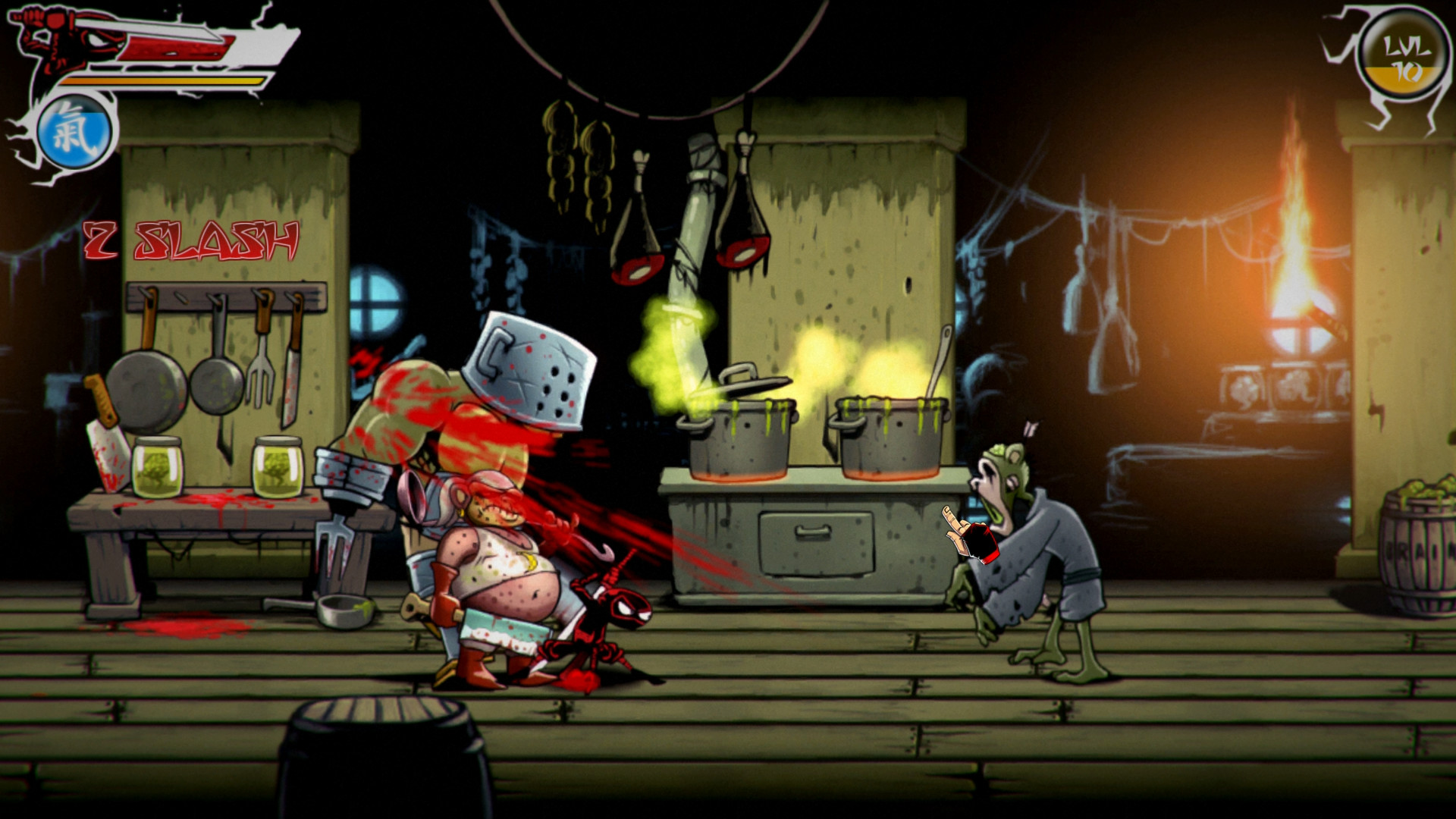 Draw Slasher is not a long game, but it’s also not one I’d recommend to anyone looking for a “casual” or “easy” gaming experience. Sure, it’s not Super Meat Boy…but nor is it, well, Fruit Ninja. It’s pretty hard, even on Easy level, and has the kind of mechanics which will require patience from the average PC gamer. As much as I enjoyed it, I can’t help but feel that it’s probably a game better suited to mobile touch-screen technology, as a mouse isn’t the most intuitive way to quickly draw a line from one side of the screen to another.

Beyond this, however, it would appear to be a quality port, and there’s no denying the game its more-than-fair share of charm. It also has a lot of additional Challenge and Arcade modes to give it some longevity, though how much replayability the Story mode itself has is really up to the tolerance of the individual. Don’t come expecting an awful amount of bang for your buck, and you may well be pleasantly surprised.