Ballistic Tanks is a simple, yet engrossing arcade shooter that falls neatly into the category of ‘party games,’ meaning that it’s a game best played with friends; the more the better. A simplistic single player mode gives way to a vastly superior and far more enjoyable local versus mode that can be shared between up to four humans, or with bots making up the remaining number. While Ballistic Tanks doesn’t do anything radically fresh or new, what it does do is clean, polished and very enjoyable. 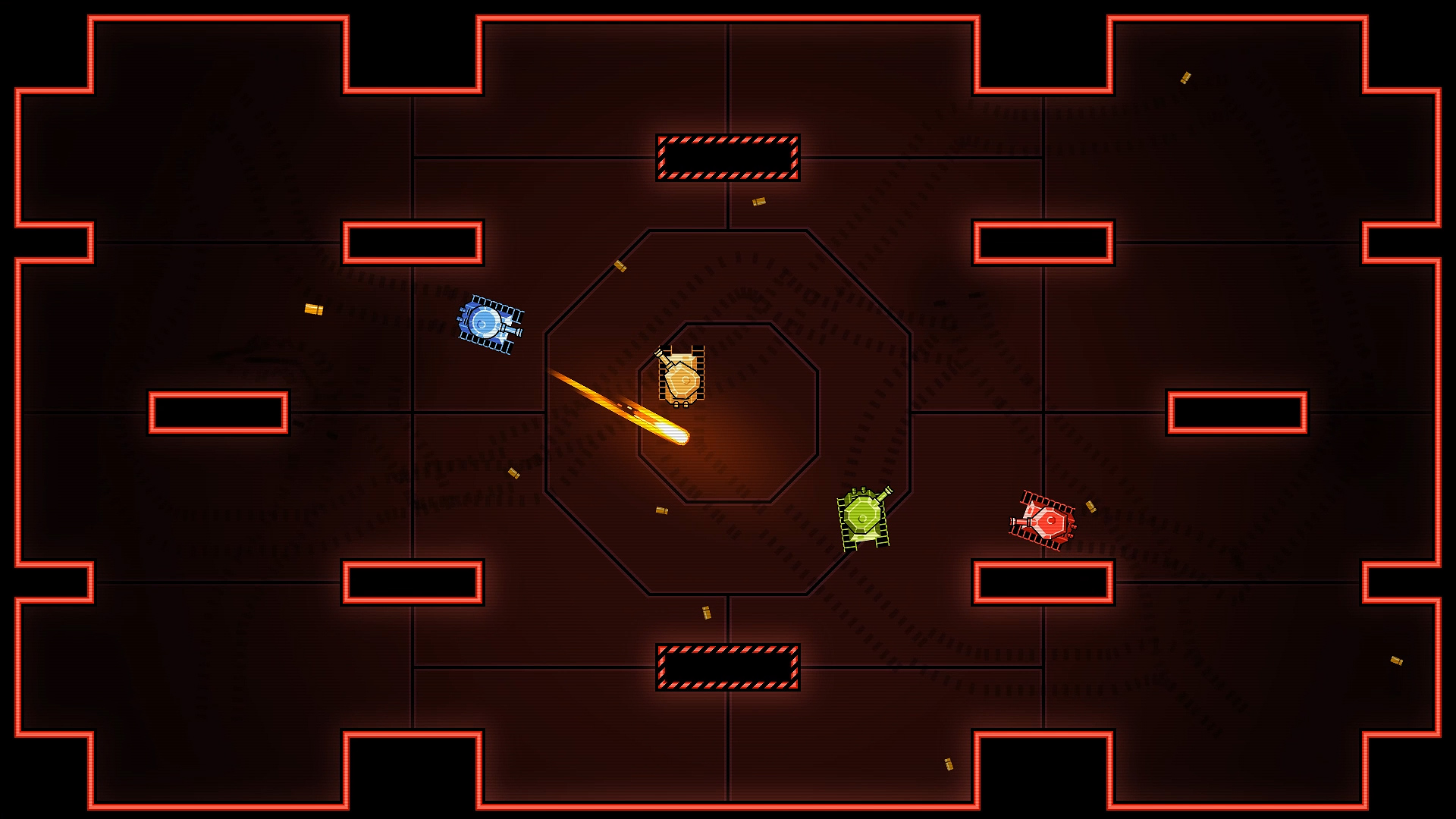 The gameplay is very smooth and polished. You control your tank as you try to outmanuver hostile tanks, destroying them while dodging their return shots. Operating on a one-hit-kills mechanic, you don’t need to worry about managing health or damage. There are enemies that can take more than one hit, but they are clearly indicated by the appearance of extra armour or energy shields surrounding them. Aiding you is a selection of powerups, ranging from short timed shields or speed boosts, or gun upgrades like bouncing shots, triple shots, homing rockets, land mines and the like. In addition to the powerups, you can also spend coins collected on the battlefield to buy single use performance increases to your rate of fire, movement speed, shell movement speed, or to continue in single player after a game over.

Enemy selection is suitable varied, ranging from basic tanks with a simple single shot cannon, to heavily armoured assault tanks that can take several hits, to Tesla tanks that can shock and slow other tanks around them, to sniper tanks, and beyond. 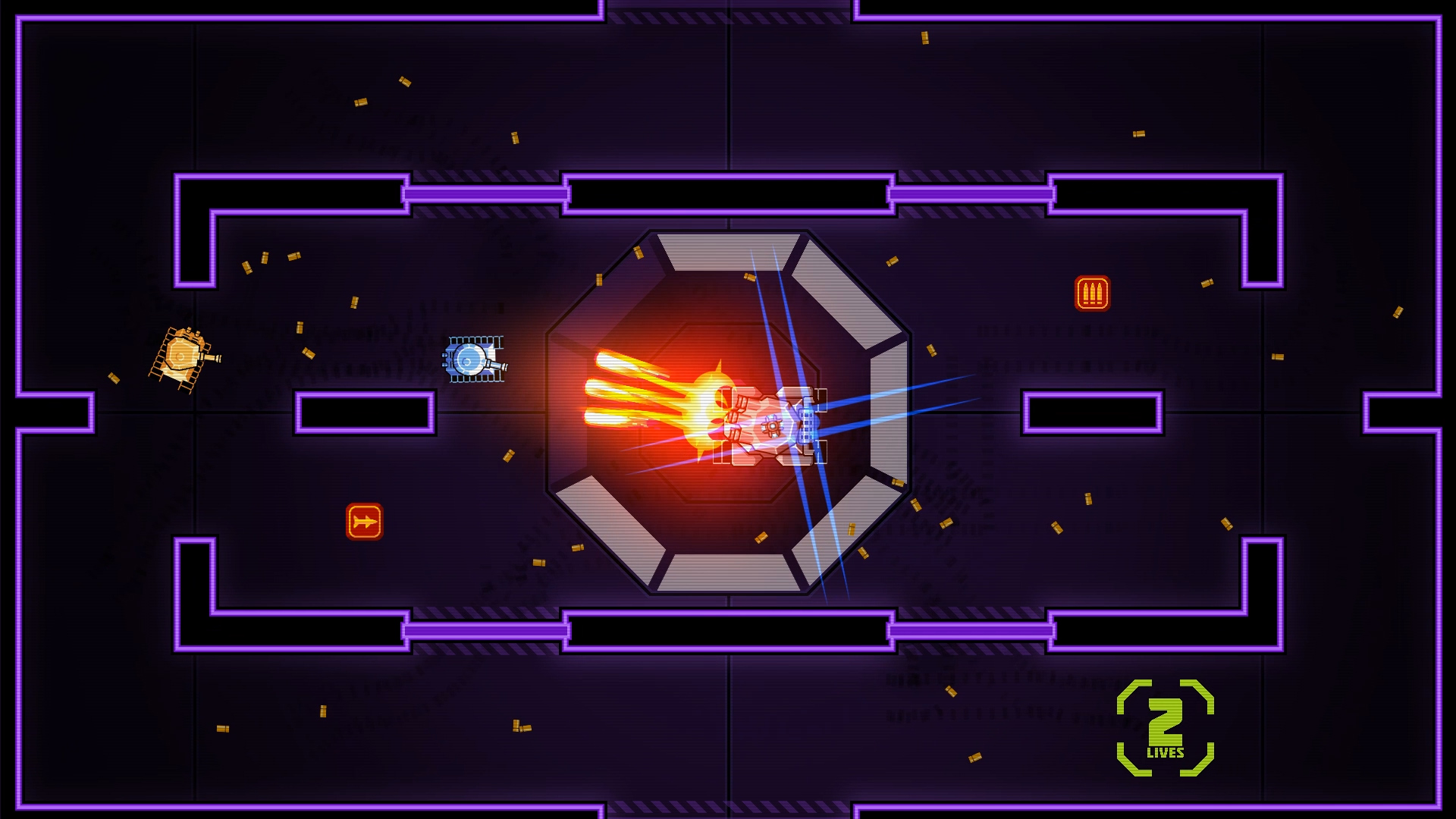 Ballistic Tanks features a single player/local co-op mode, which is enjoyable enough on its own, but the real meat of the game is found in its versus settings. In single player, you must fight through increasingly tough waves of hostile tanks on varying maps. The A.I. in single player is competent, but nothing outstanding; most tanks will try to swarm you, which can be tough in numbers, but is also easy to set up shooting gallery events in which you knock off each enemy tank as they poke their head around a corner. The A.I. Bots generally won’t offer you much of a challenge.

The versus mode is a different story. Played with a full group of four people, the battles can be fast and frantic as you try to nail the other players. There is the standard deathmatch modes, as well as a king-of-the-hill style mode in which you must capture and hold a point on the map to become a super powerful juggernaut tank.. The best mode however is Powershift, which offers up a randomised selection of gameplay modifiers each round. This could be that all tanks are super fast, or all tanks are tiny, start with extra shielding, have homing rockets instead of a main gun, are almost invisible, have sniper cannons, etc. It keeps the game feeling fresh, and victory goes to the player who can best use the modifiers and the map layout to their advantage. 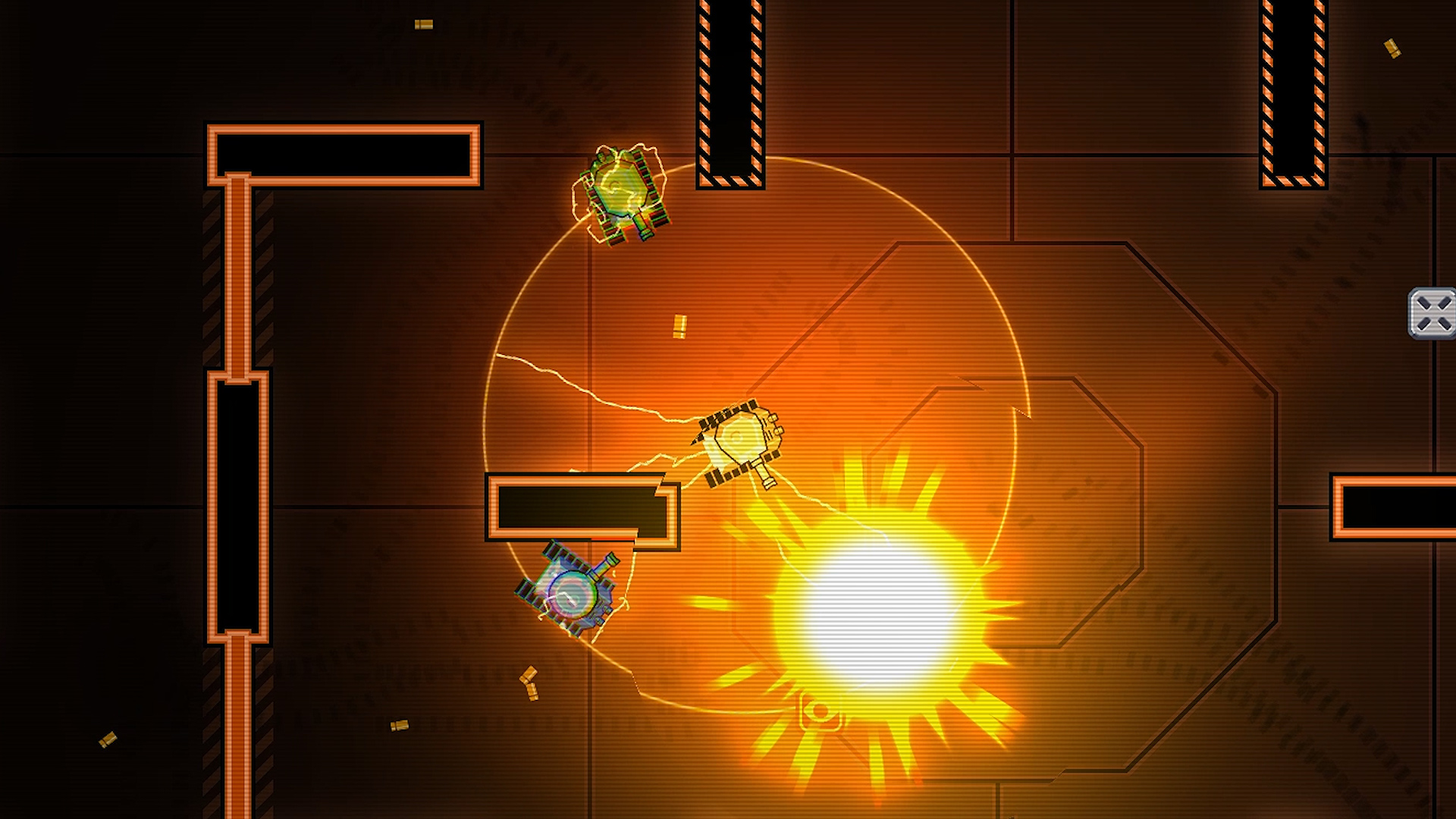 The game boasts that it offers over 50 different maps to play on, but in reality, they are really more like variations on a theme. They can have conveyor belts, sliding doors or shifting walls, but the maps all tend to feel similar. It would be nice to have maps that include environmental hazards to add to the madness and make each map feel more distinct. As it stands, they blur together with no one map standing out as being the outstanding pick or dreaded choice.

Notably missing from the game however is any form of online multiplayer. All multiplayer is done locally on one PC. Ballistic Tanks would have been a fantastic online competitive experience, especially when played alongside or against friends who live in other areas or countries. The game’s Steam page lists both co-op and local co-op as two separate features, and some players have expressed disappointment in the lack of online modes. We can only hope that such features are possible in the future as they would help expand interest of what is a solid arcade experience. 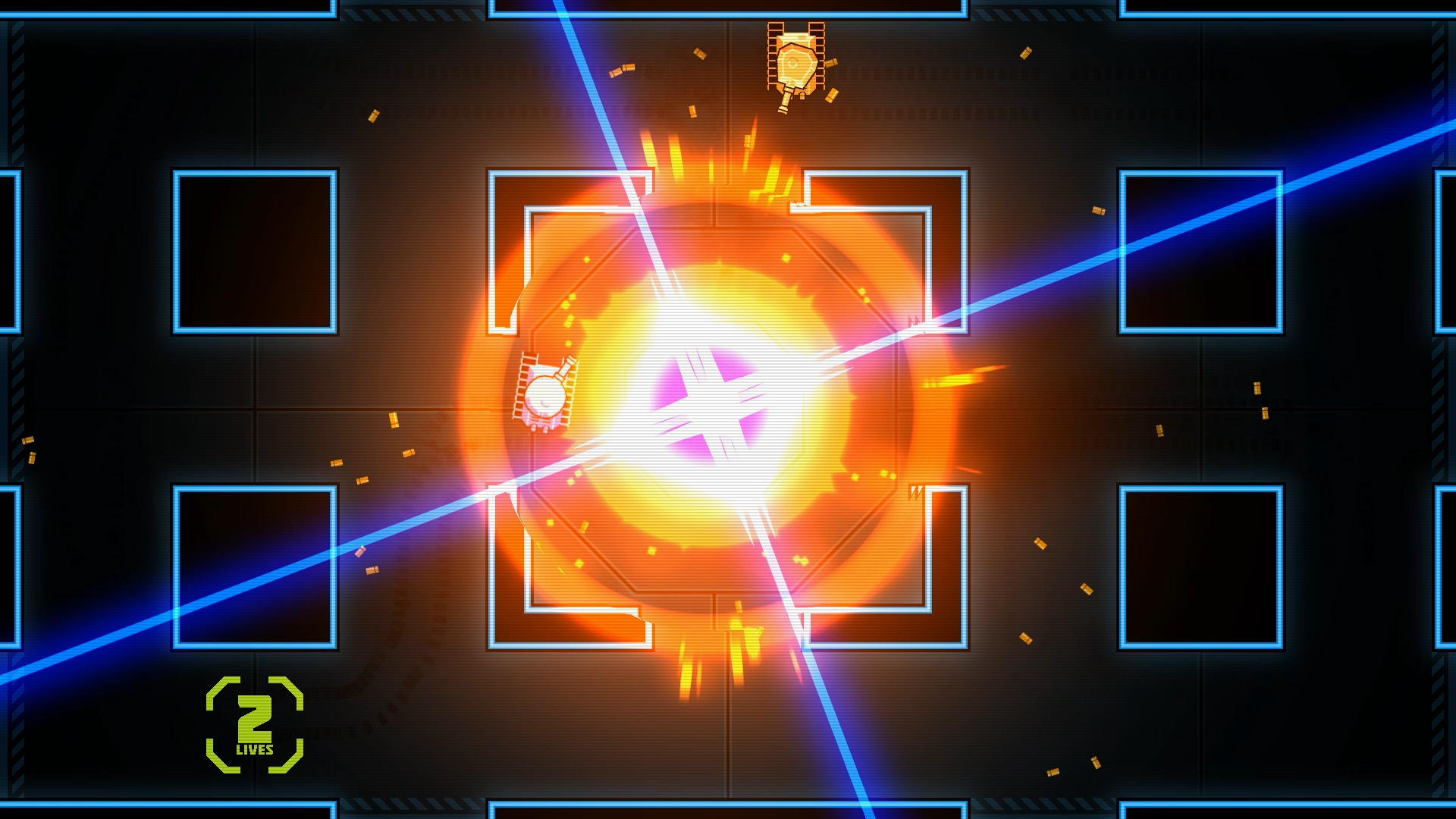 Controls are simplistic in the extreme, but very intuitive. Left hand WSAD/Left Stick controls the movement of the tank, with precise controls that aren’t quite full analogue 360 degrees, but greater than 8-way directional when using a gamepad. Right hand mouse/Right Stick controls the tank’s turret, which is able to aim and shoot independently of the movement of the tank’s body. Those familiar with Twin Stick Shooters will feel instantly comfortable with the control scheme, while those who have never played such a game can pick up the controls very quickly. There are no excess controls to worry about; just move, aim, and shoot. Powerups are applied automatically upon driving over them, with no further action required on your part to distract you from the gameplay.

Ballistic Tanks boasts somewhat limited sound design, but like the controls and story, this isn’t so much an oversight as it is just keeping the game pared back to only what it needs to be fun. The music is limited to a couple of tracks, but they are all well suited to the game’s style and tone. High energy electronic beats mostly. Sound effects are limited to the firing of the tank cannons, the spent shells hitting the ground, and hits scoring on other tanks. The game does not feel lacking in the sound department however. It has as much music and FX as is needed, and not one byte more. 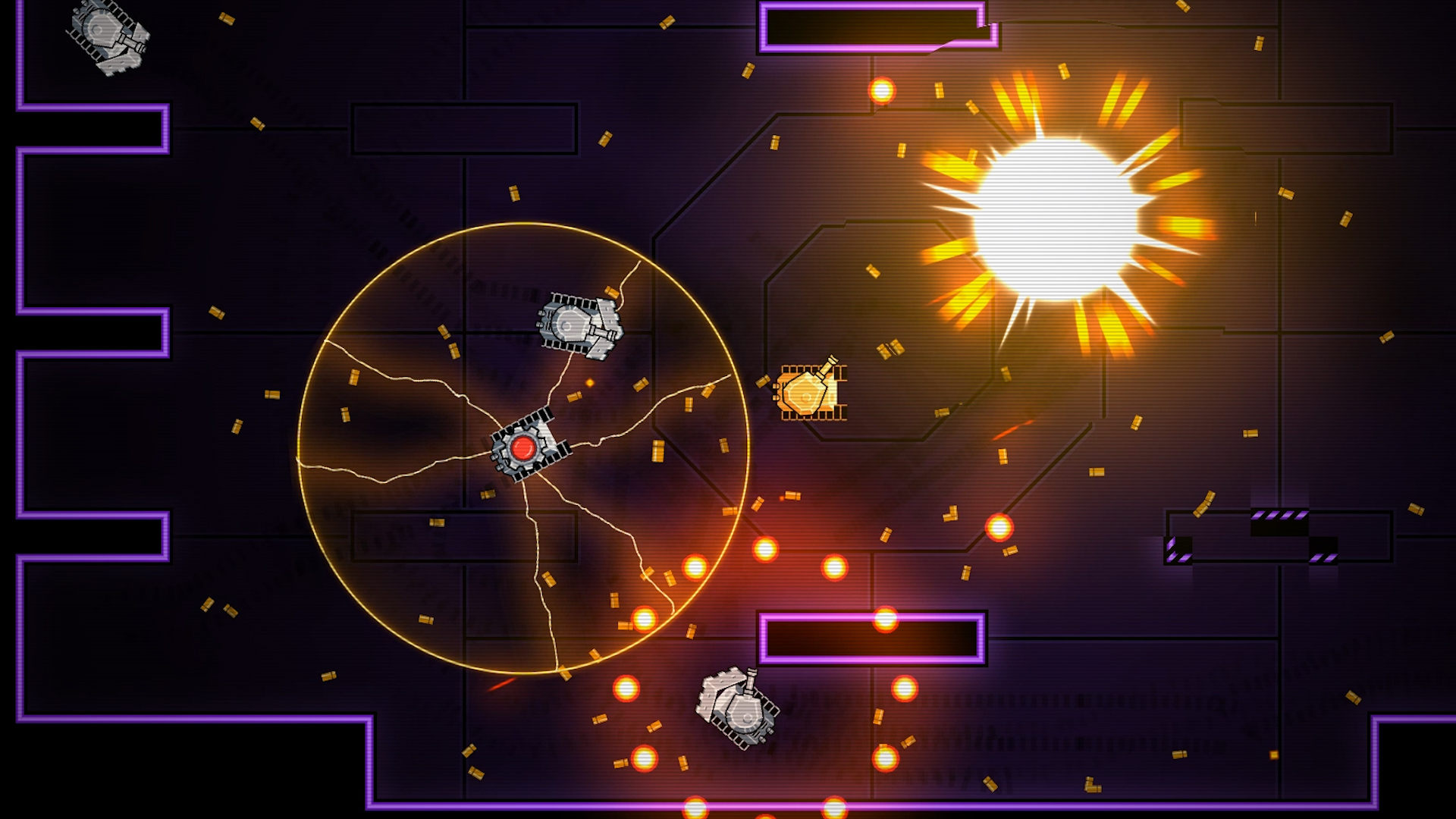 Ballistic Tanks does a great job of presenting a polished game, but it sadly does have some crippling issues at time of writing this review. Mostly these only affect the single player mode. One I have run into several times now is a glitch in which hostile tanks spawn inside inaccessible parts of the map, effectively making them cut off from the rest of the action. They can’t be attacked via normal means, and this effectively makes the round unwinnable, as the game will not register a wave complete until every enemy has been destroyed. Hotfixes have solved a number of reported issues, but there are still more to be tracked down for the moment. The developers have indicated that there are still some updates coming down the road, so all we can do is wait and see what comes of it all. 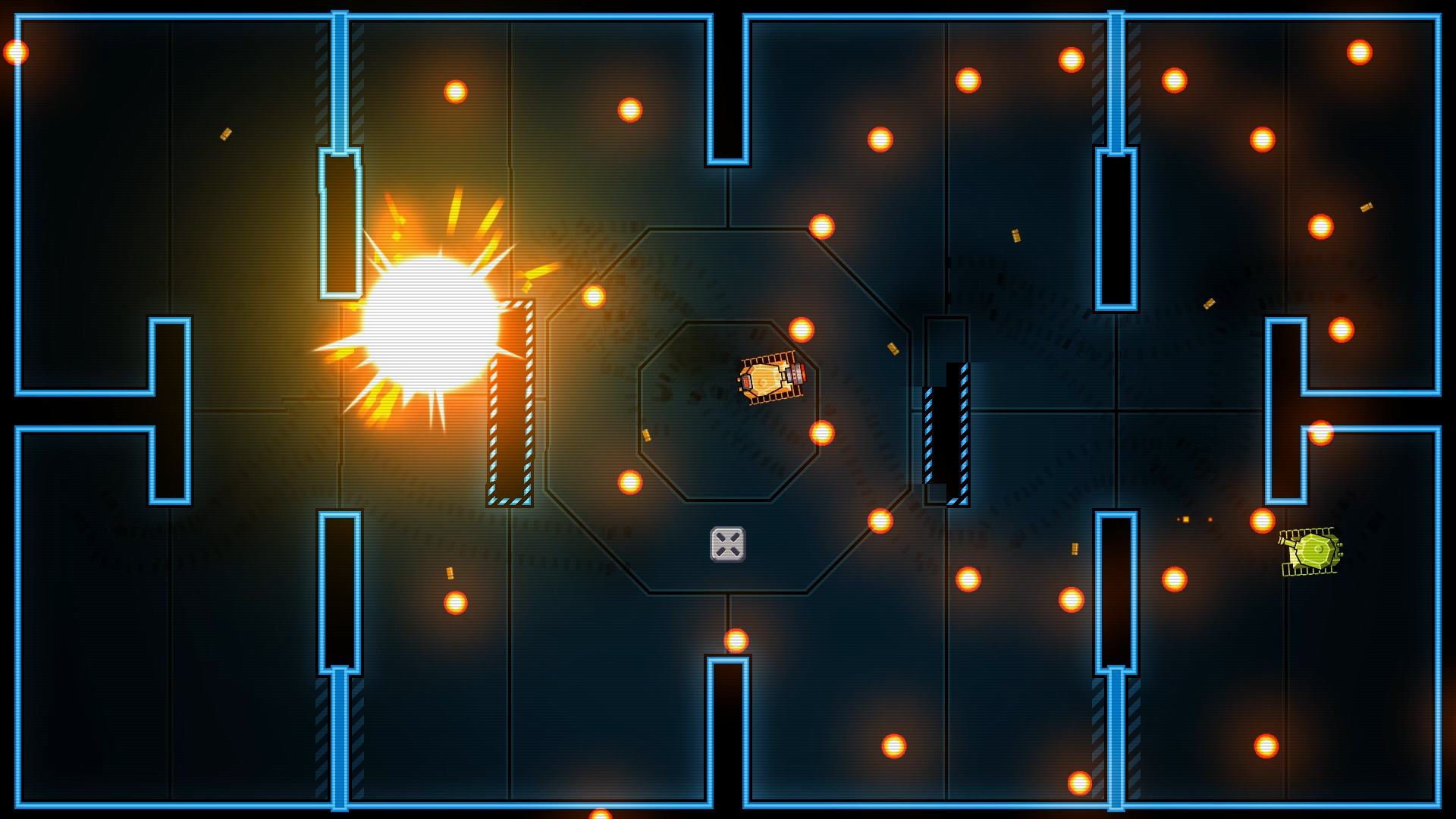 Ballistic Tanks is a small slice of pure arcade badlam. There is nothing standing between you and the game; no need to get bogged down in unnecessary story, controls that encourage you to just get right into it, and gameplay that is built on variety. Throw in a couple of friends and you have a yourself an excellent time waster. If you are hesitant about trying out twin stick shooters, and want a way to get a feel for the controls or style, then this is a perfect introduction. Currently priced on Steam at $4.99 USD, this is one game to keep an eye on if you have competitive friends, especially if you happen to catch it on sale.