This is a platform/adventure puzzler with 16-bit graphics. Before you say “meh” and move on, let me tell you that this game is so much more than its label suggests. I confess to having always been biased against low-res games like this in the past, I’ve always thought pixel graphics = basic gameplay but WOW, have my eyes been opened! 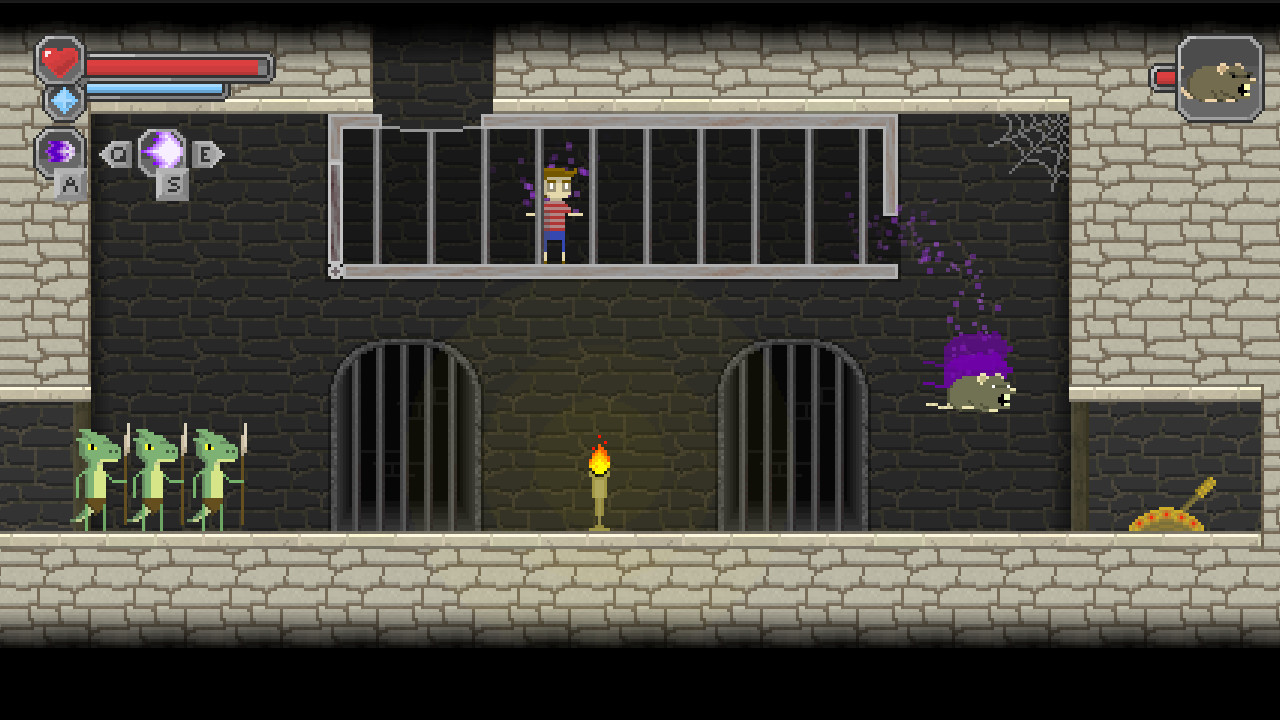 You play as a boy named Sam who enters a platform area. You shoot enemies and then possess their bodies (one at a time) to use their abilities to navigate past the various traps and obstacles to reach switches, pressure plates and walls to eventually make a path for Sam to reach the exit and move on to the next level.

Dead enemies drop gems to be picked up by Sam which increases his gold profit. At the end of each main area the gold can be spent at the market stall of the mysterious hooded man (who reveals himself at the end of the game) to purchase powerups (increased weapon range, more health etc), making Sam stronger to tackle subsequent areas.

Sam has 2 power bars: the normal red one for health, and a blue one to represent Mana which depletes as Sam uses his special Spells. New Spells are acquired by picking them up on certain rare levels.

Split-screen local co-op is available. You can recruit a friend to play the possessed enemies while you control Sam. 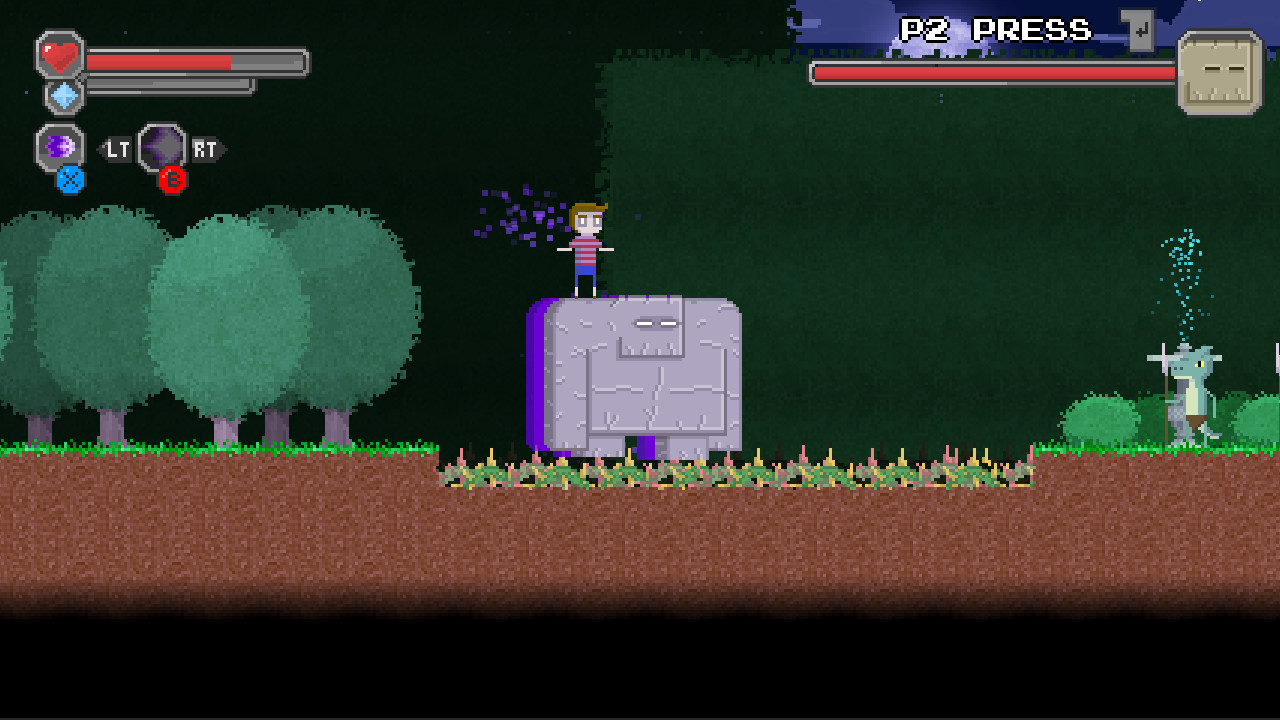 Up to 1920×1200 res, window or fullscreen. The pixel graphics are clean and sharp. I wouldn’t go so far as to say beautiful but there’s enough artwork to make it pleasing to the eye. The many enemies are imaginatively designed and instantly identifiable.

Background music is outstanding. There are various different tunes as you progress through the game, they are all catchy and really suit the 16-bit mood. I left it on instead of playing my own music, which is very unusual. They’re the sort of tunes that stay in your head and you find yourself humming them later on.

Smooth and responsive on both Windows and Linux. One or two disappearing-enemy glitches are easily fixed by restarting the level, rare and hardly worth mentioning. With low-res graphics this is likely to run well even on potato-class hardware. Good settings menus, everything is tweakable. Fully cross-platform. 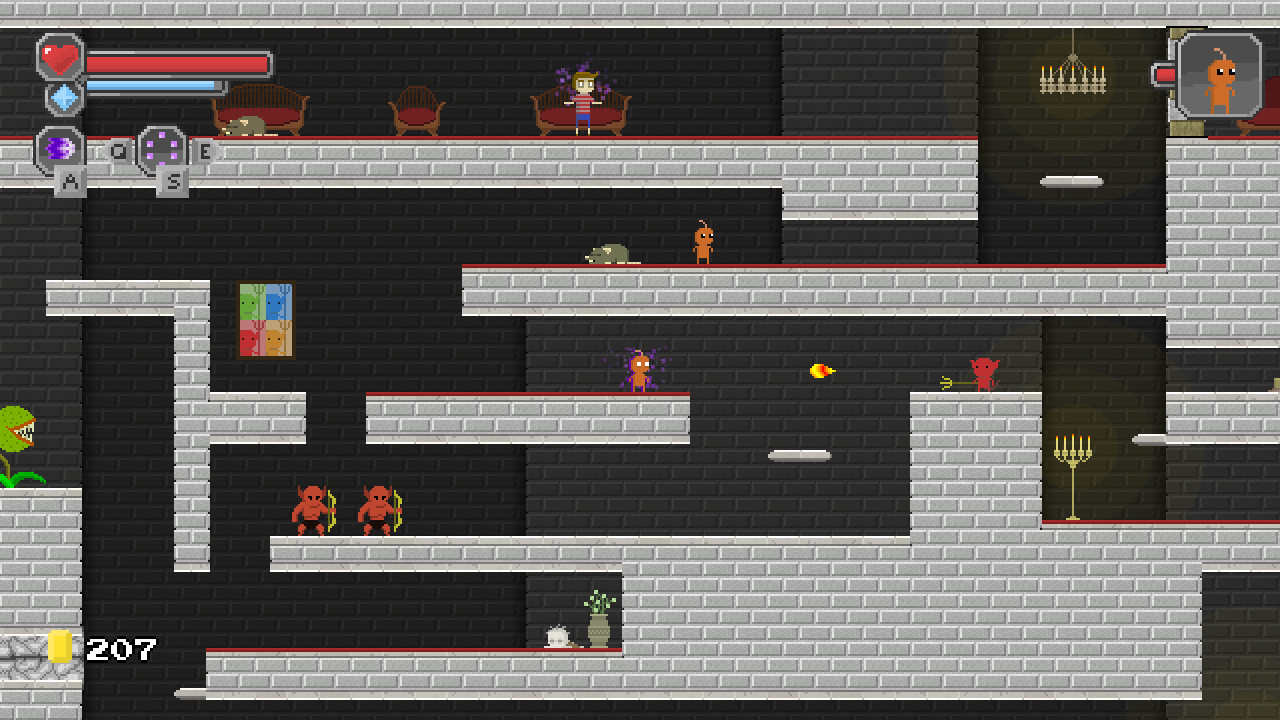 Puzzlers are my favourite thing, I’ve played many and consider myself a bit of an aficionado so I have a lot to compare against. The brainwork here is never easy. It starts off as medium and ramps up through difficult and very difficult. In some cases, part of the challenge is working out how the abilities of a new enemy work and how they interact with the puzzle – there are some Eureka! moments as new game mechanics are revealed. The general aim is to a) kill the enemies one by one (often using them to kill each other), b) work out a route to the exit and c) decide which enemies are the right ones to tackle each part of the puzzle and how to apply their abilities.

Controller skills: the game can be played with mouse/keyboard but I’d say a controller is mandatory. There is little or no challenge in the first 2 areas, it’s very easy. The 3rd area starts introducing some difficulty and by the 4th area I was having trouble with some levels. I’m no expert with this type of thing, if you’re used to coordination-oriented games you’ll no doubt find it easier than I did. This aspect of the game is secondary to the puzzling anyway.

Bosses: at the end of each area is an old-school boss, the type that’s very difficult at first but once you understand their attack patterns it becomes a matter of routine. The final boss (the Grim Reaper himself) is really tough!! 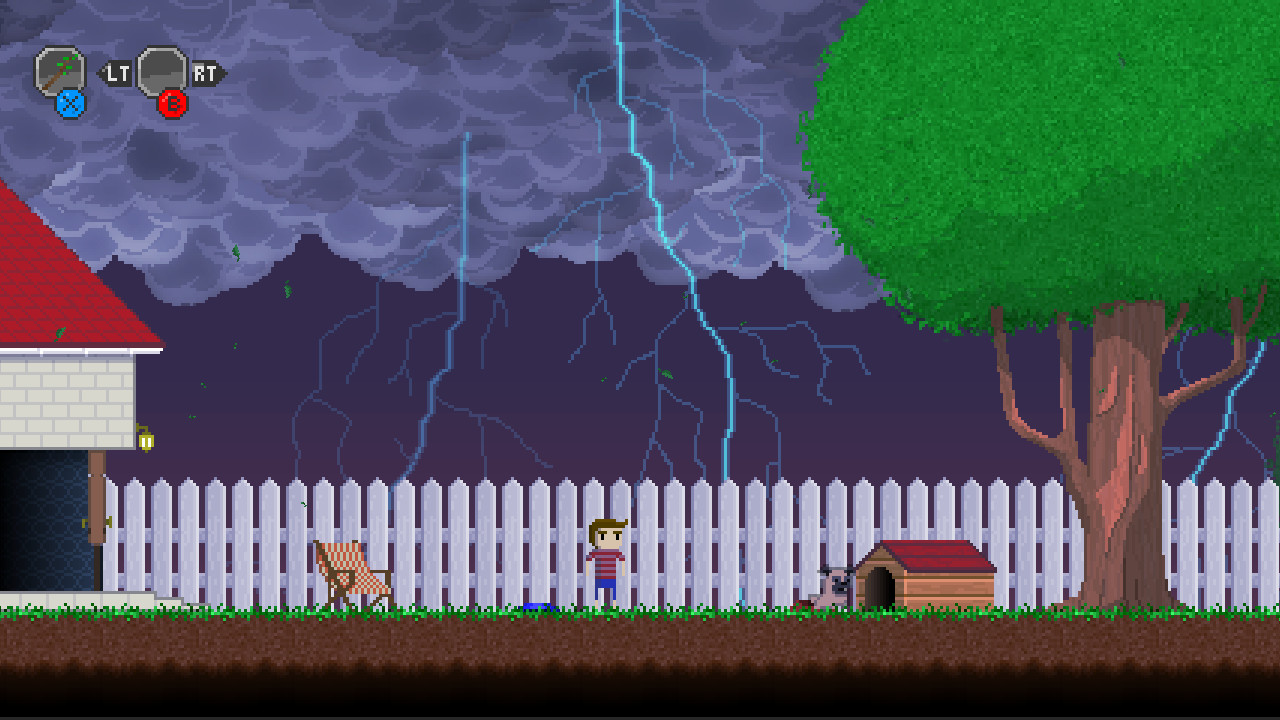 The only negative thing I can think of to say about this game is that during the first playthrough there’s no indication of how many levels there are or how far through the game you’ve progressed. I’ve given you this info below, so now there’s no con 🙂 The devs have told me they’re considering adding some kind of progress indicator in future.

Once you complete the game you can repeat whole areas (starting from the first level of the area) by going through doorways from the main entrance but there are still no numbered levels to select. This does at least make it feasible to chase the no-death achievements.

60+ levels in 4 main areas. According to the leaderboards it can be completed in 7 hours but it took me a lot longer, at a leisurely pace with a good amount of head-scratching and restarts. There is replay value in tackling achievements for no-death runs and missed pickups etc. It’s not just the quantity though, the quality of puzzle design is also top-notch, the wide variety produces constant challenge so it never feels stale. 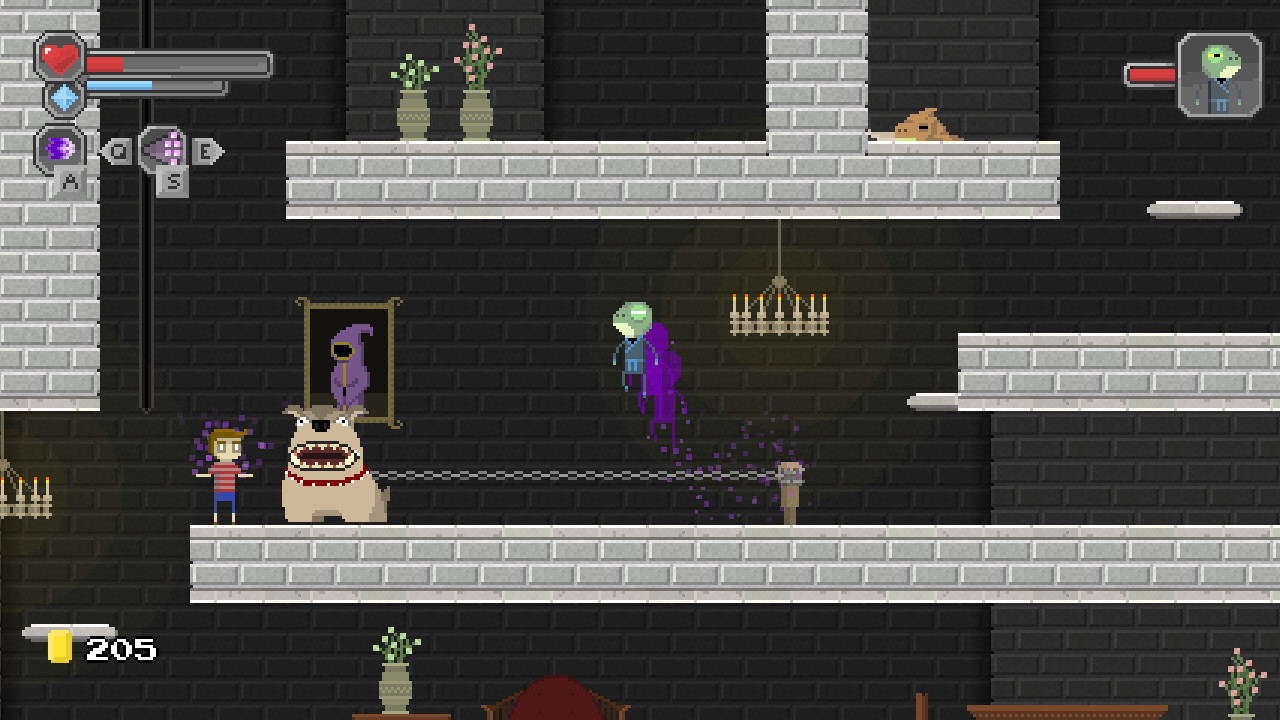 Don’t let the pixel graphics put you off, this is a highly accomplished puzzler and it’s a joy to play. I’ve been waking up in the morning eager to tackle more levels and discover new enemies. You’ll be hooked in no time.