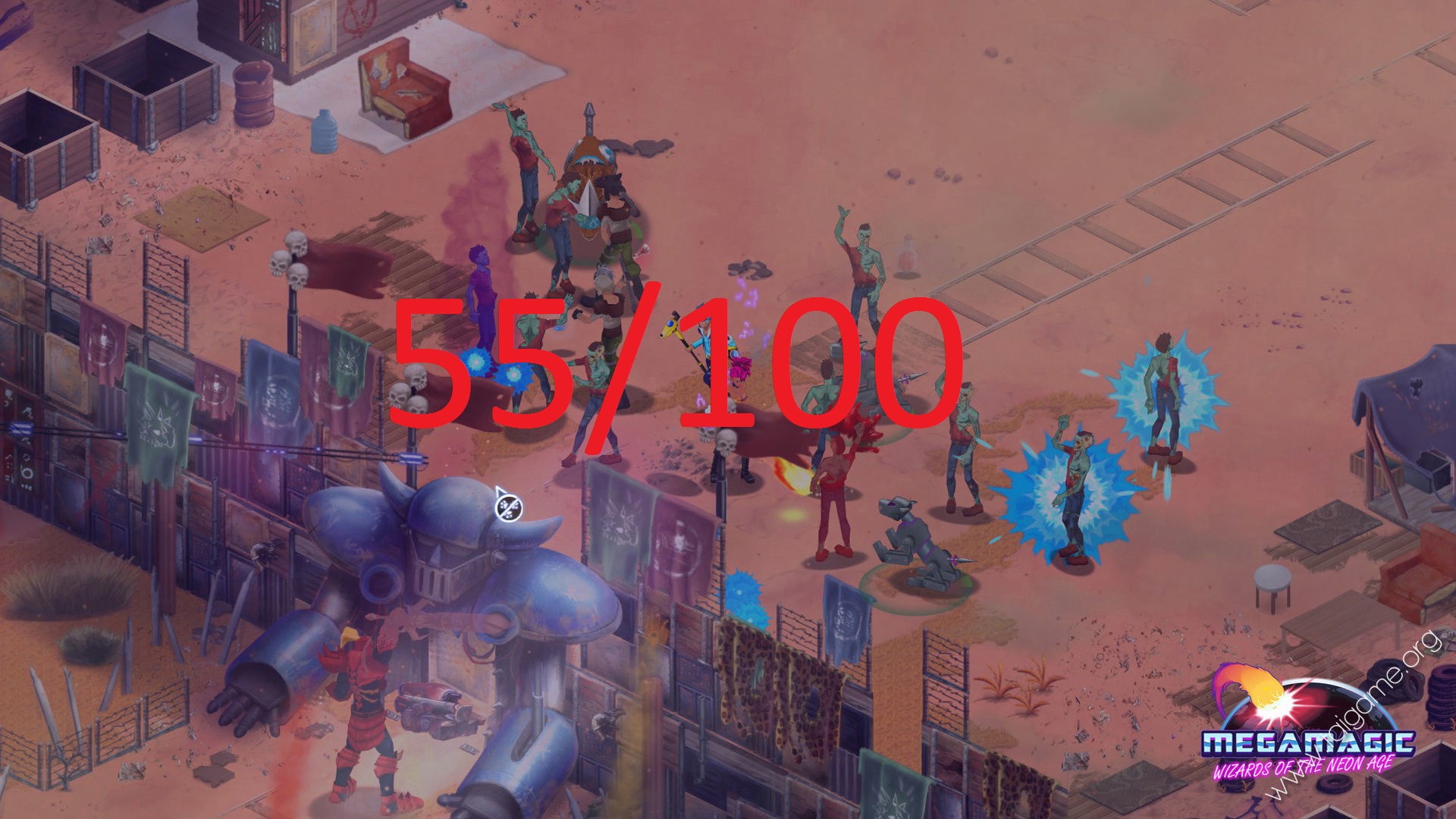 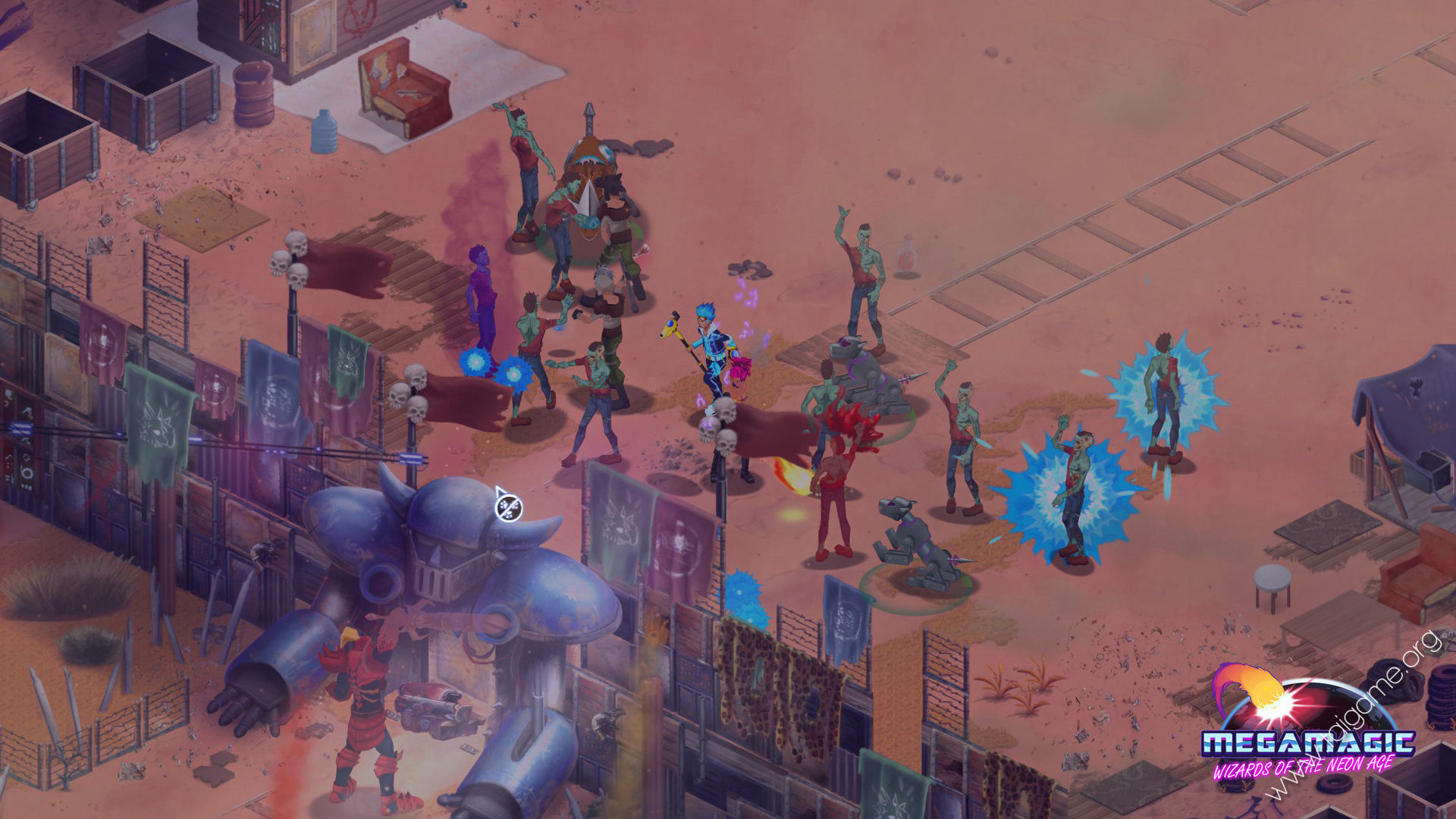 I remember the ’80’s. Well, most of it. It was all shoulder pads, big hair, and gaming systems that had memory measured in kilobytes. A time when if you wanted to play a game, you’d insert a tape, press play and then wait the 10-15 minutes for the game to load. Thankfully, Megamagic: Wizards of the Neon Age is a game that only takes references and style from the 80’s rather than the graphics quality and the loading times. 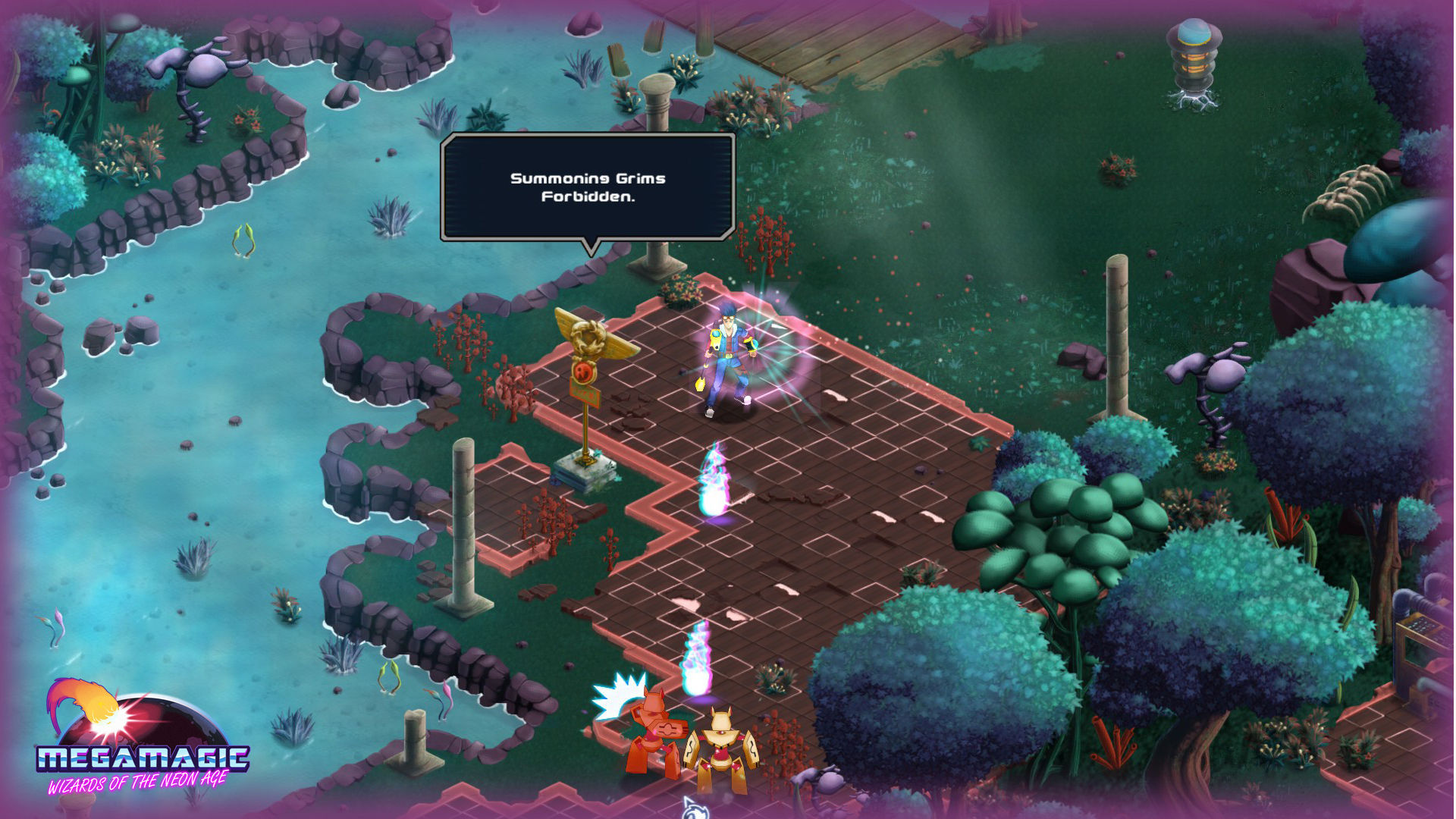 Megamagic: Wizards of the Neon Age is set in a world where magic and technology work together. You play the son of a great magician, who spectacularly passes his magic test and then attacks the leader of The Order after refusing to hand over his floating creature, he calls ‘fum’. After running from the temple he finds himself on the run from The Order who owns a rather sizeable peacekeeping force. It is up to you to learn to wield the five schools of magic; summon a platoon of creatures called grims and find out just what the Order is not telling anyone.

The whole game does look and reflect an 80’s style, even down to the synth music soundtrack ably provided by Mitch Murder but they don’t drown you in eighties nostalgia, it’s more of a nod-and-a-wink to the decade, with a few in jokes, and pop-culture references.

When you start the game you’re taken through a brief introduction of the basic controls by way of a short prologue to the story. You’re shown how to use the keyboard to move your character, and how to use the mouse in order to select and cast spells. When the prologue ends and Chapter One begins, you play the part of the younger of the father’s sons, who’s asked to perform a few basic tasks before going to the temple for his exam.  The majority of the gameplay is focused on simple movement based puzzles and destroying your enemies with magic and grims before they get close enough to kill you.  You have a health bar and a mana bar which can get bigger as you go through the game. Ultimately the RPG elements within this game are not overly dominating. There aren’t any other stats to improve or gear to equip, purchase or modify, which means the skill in WoNA is all about learning to use your spells and summons effectively. Combat is the meat and bones of Wizards of the Neon Age. As mentioned, apart from the odd movement puzzle, it’s pretty much all about your spell-slinging abilities. There are two different areas of magic, spells and grims. There are five different schools of magic (Neonmancy, Vegemancy, Sanctumancy, Fulgomancy and Necromancy) and several spells for each of those, although the spells you have access to at the start of the game are limited, but are your standard kind of magic spells like Gust of Wind, Arcane Shot and so on. Summoning grims are the second aspect of magic and allow you to summon creatures, monsters, even demons to do your fighting for you. Well, you know what they say, “You don’t summon a demon and fight, yourself”. These grims will automatically fight other monsters although you can control who they attack, and even use their special power if you want to, by holding shift-right click. 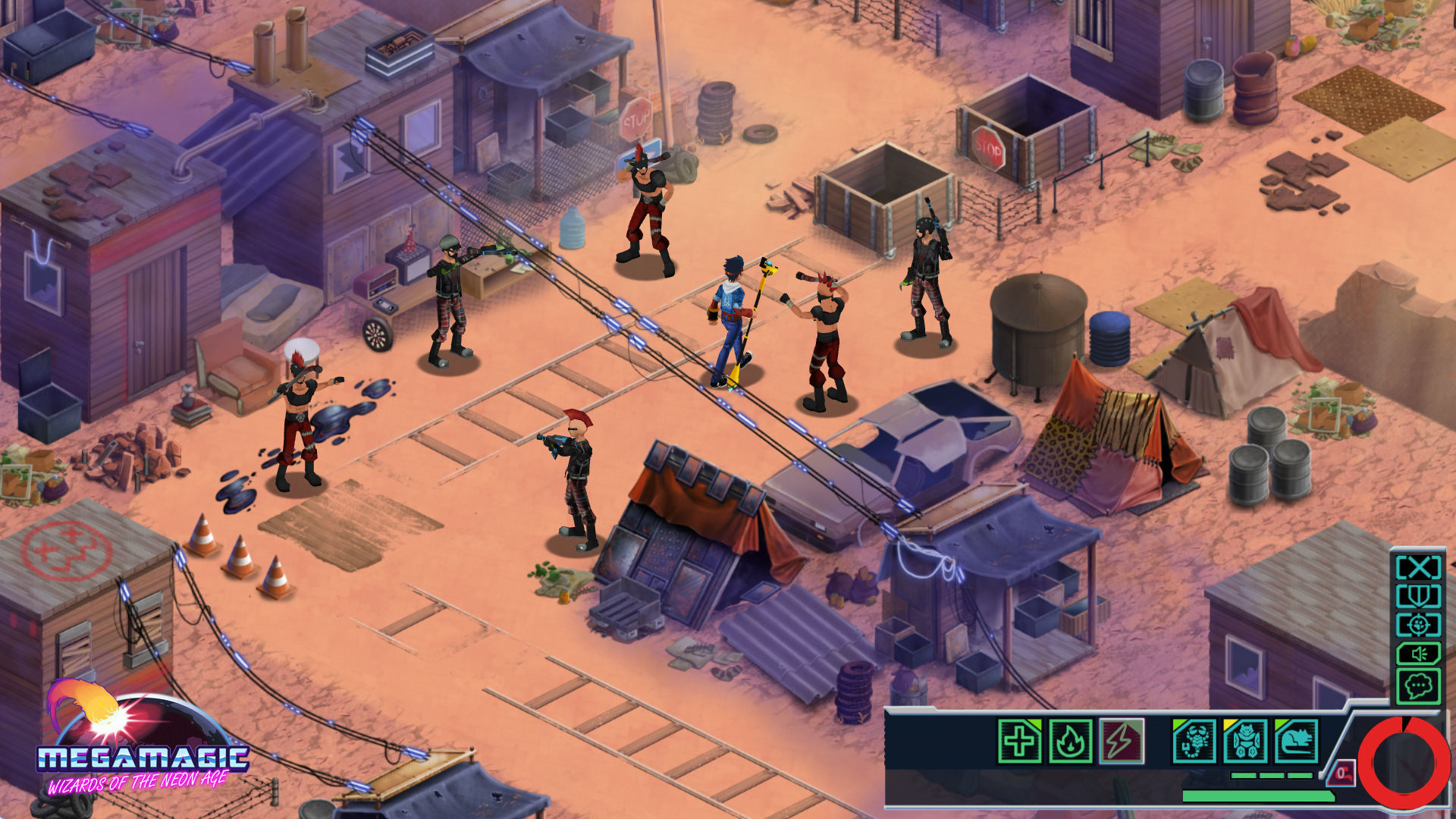 I found the combat system, a little clunky. You have an action bar at the bottom of the screen which shows your currently selected spells. You click on a spell to select it, and then right-click on an enemy to cast the spell and your mana bar goes down a little accordingly. This in itself is not overly difficult as you can imagine, but when you add grim summoning in as well, it suffers a bit. To summon a grim you select the one you want and right-click on the ground to summon it. Then you’ll need to click on the grim and shift-right click on an enemy to make it attack them. If you are to use spells and a grim, you’re constantly switching between the grim and the action bar, right-clicking, left-clicking and shift clicking. In many cases I found myself just using magic and letting the grim handle itself, or just controlling the grim and not using magic. It’s like you can only really use half a system. That aside, the basic controls of combat are very simple.

You may be pleased to know that there is a multi-player option, where up to four of your friends can control your grims. Although, this is only available as a LAN co-op, and unless you’re at the point in the game where you can control four grims some of your friends may be disappointed. Honestly, not the best multiplayer mode and in truth I don’t think it really adds anything and wouldn’t be missed if it was removed. 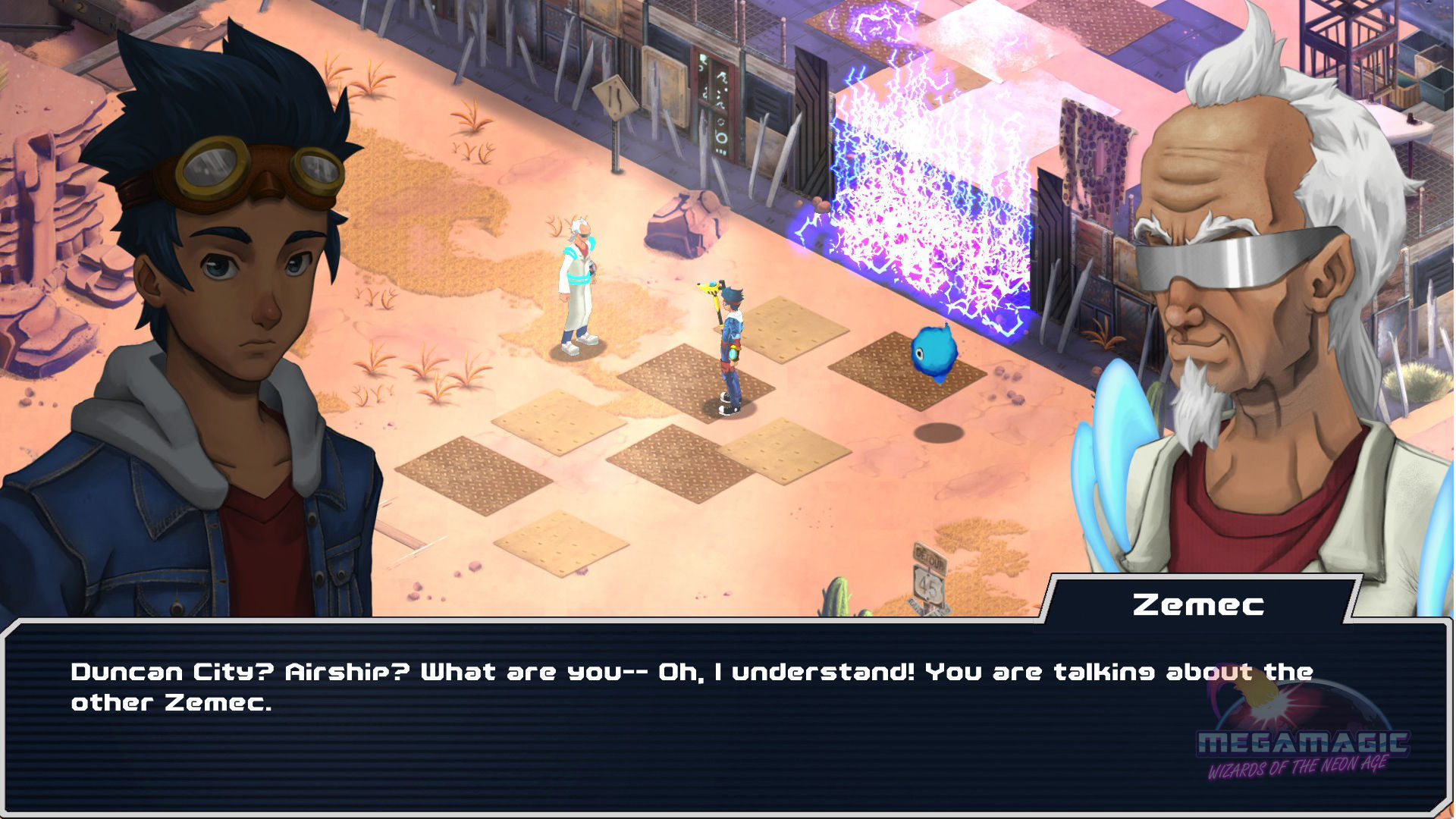 Megamagic: Wizards of the Neon Age is alright. I know, that’s not the most enthusiastic or dramatic conclusion to this review, but that’s it. It is nicely done and as far graphics and sound go, it’s good enough. Combat is simple, but does suffer from a little clumsiness. I think following the approach of several MMO’s and having targeted enemies and a pet/grim action bar made have made combat a lot easier. The story is enough to keep you going, but I can’t imagine that once you’ve done it you’ll want to go back and play it all over again. The whole thing might just be a little overpriced at £10.99.