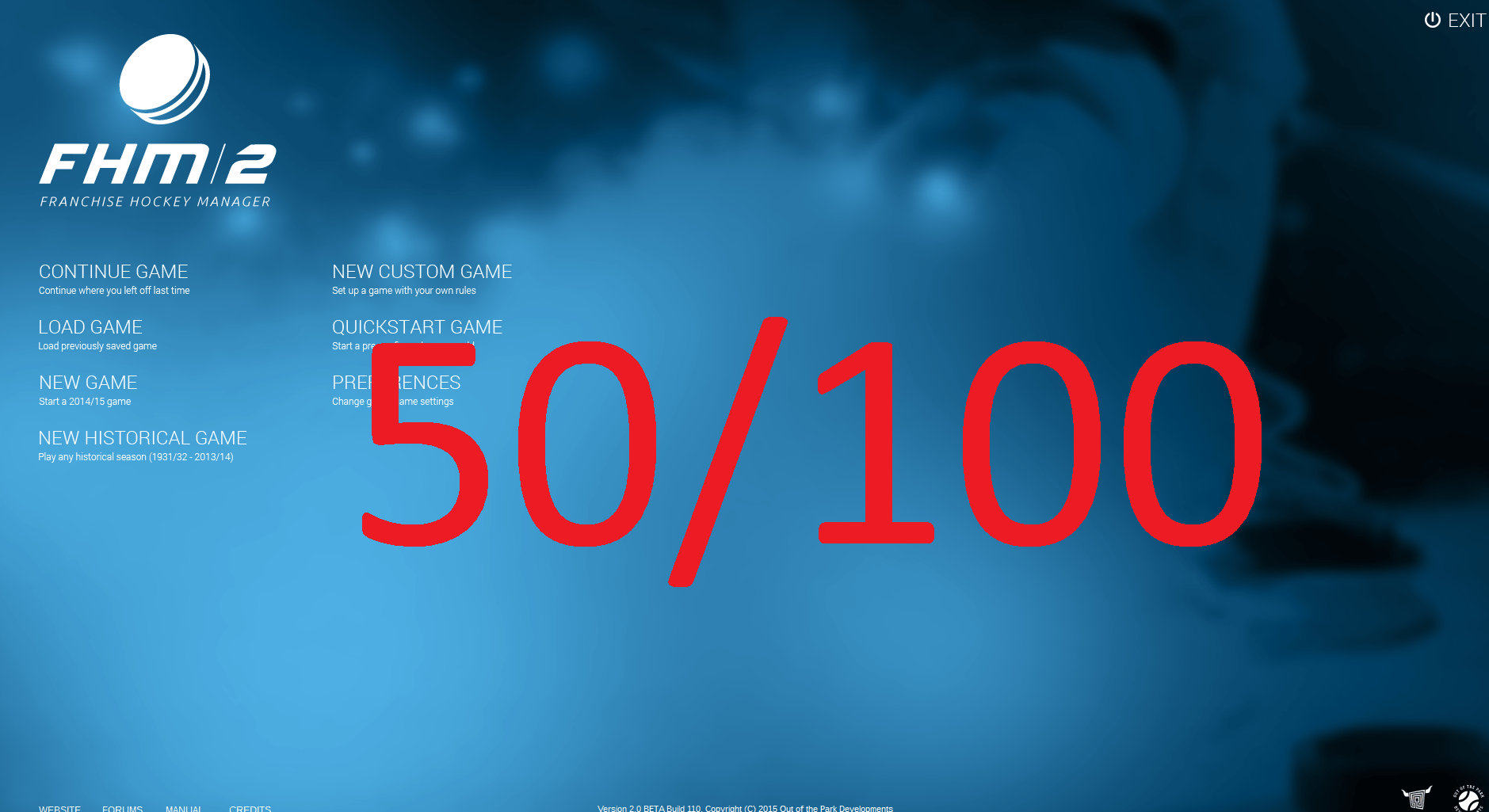 Back in the days we had two football management simulation games, but now we only have Football Manager. Today we have two hockey management games and one looks very good and serious, while the other has minor or a little bigger problems. Eastside Hockey Manager is developed by Sports Interactive and Franchise Hockey Manager 2 is developed by Out of the Park Developments. The FHM 2 is that game with problems. I haven’t played the first FHM, but what I have read on the numerous forums, the game improved, but it still isn’t very friendly for newbies in this genre and hockey as sport generally. Thats probably the main problem of this game, not user-friendly.

Franchise Hockey Manager 2 has almost everything that one normal sport management simulation game should have. Training, tactics, formations, roster, trading, transfers and many other things. I am playing Championship Manager and Football Manager all my life, but I have never tried a single hockey like game, untill now and to be honest I am not so impressed, maybe that’s because I am used on more advance stuff than you can find in FHM 2. The game offers basic career mode, quickstart, custom game and historical game. Quickstart brought me good old memories, while custom game and historical game is what I would like to see in some other game(s). If you choose custom game, then you can basically make your own league, with your own fictional teams and everything while in historical game, you are able to take any team from any year starting 1931/1932 and ending 2014/2015, but we all know that most of the people are playing the normal career modes only, so we will focus on it in this review. Even though I am now watching hockey so much, I still have my favourite club and that’s New York Rangers. After starting the career mode, the home screen opens, in which you can find numerous informations about your team. Another problem in this game is the design and navigation. From what I’ve seen, the design is almost the same as in other OOTPD games, but with few differences. For a game in the second decade of 21st Century, I think there should be more graphics and less text. I don’t are there any others skins beside the default one, but this one is just too white and not so good looking and when you add not so great navigation, you don’t get the best experience. Also if you are a hockey newbie, then you will have hard times understanding some terms and because of that it will make your “life” harder.

First of all we must give credit to OOTPD for hardworking and trying to make the best game in the genre, but still there are some things that needs to be changed in FHM 3, it that will ever happen. As I said, this game has all the basics. Roster, Lines, Tactics, Schedule and other significant management things. To be honest I never got into this game, because of the design, navigation and now knowing many things about hockey generally. I must say that only hardcore fans of hockey and hardcore fans of hockey management simulation games will like this game, the game is hardcore and I don’t see how will some casual person play this. I am not saying this is a very bad game, but this is the game that will only fans of the series and fans of the genre like. When this game becomes more user-friendly, then it will reach the wider audience then it is reaching now. 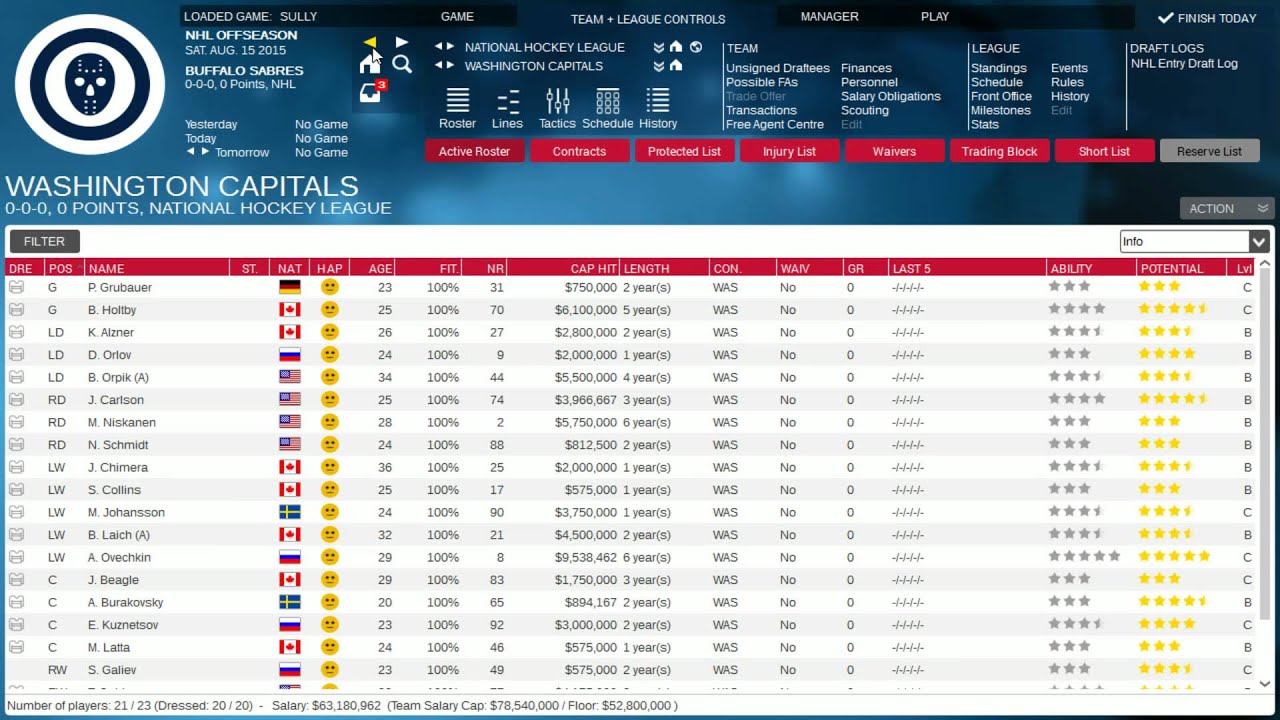 Another “heartbreaking” thing about this game is the match engine. In the first FHM you were only able to read whats going on in the match, but now they added a little bit of graphic, but still it is a text-based engine. The game engine – has been completed redesigned from the ground up, according to the game developers. With the new engine, every second of a game is simulated and the engine keeps track of exactly which zones the puck and all players are, at all times. It’s an improvement, but a minor improvement that will, again, only hardcore fans see and probably appreciate. I said that I am a big fan of Football Manager series, but that doesn’t mean that I am used on the 3D Match Engine, that’s not true, because nowadays I still love to play the old Championship Manager 2003/04 game that uses 2D Match Engine, with little circles playing football. I think they should had introduce the 2D Match Engine in FHM 2, but they didn’t and now I can only hope that they will do it in the next FHM game. Match engine is another feature of this game that will only like the hardcore gamers, because under hardcore players of this game and similar games are mostly older gamers and for them it’s not the problem so watch or to say better, read the match. It probably brings them the nostalgia and that’s why they don’t have the problem with it. My previous game that I reviewed was one of the worst I’ve tried, even though I will give FHM 2 low rating, that doesn’t mean the game is bad. The only reason why I will give rating of 50 to this game is because only hardcore gamers will love playing this game. When I give some game a rating of 50 that means that this game is good, but not the best for Hardcore fans and it’s average or below average for us “casual” gamers or newbies in this genre. So be careful with this game and it’s good that Steam introduced the refund system. In one hand the basic and simple design of the whole game is good, but then again, it’s a 21st century, the modern time and I think OOTPDevelopments needs to do some crucial and radical changes to the FHM, if they want to reach the wider audience. Maybe this isn’t the best written review, but I wanted to talk about some “problems” of this game, if we can call it problems. The main task is of the reviews is to bring the game closer to the reader, describe the game experience and how do you feel after playing it. I think made clear enough that hardcore fans should buy and play this game, while the “others” including me should wait for another installment in the FHM series. I hope that OOTPD will continue FHM series and that in the future we will see much more improved and better game than it is now, especially when you have healthy competition.