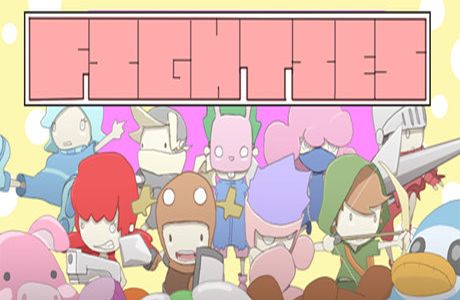 My prediction is that this is going to be a decade of pixel art, old-school and indie games, if it isn’t already. Of course that we will still get AAA games, but the amount of indie games will exceed AAA games . Especially with support of Kickstarter (or any other crowdfunding website) and systems like Steam Greenlight (is there something similar to Steam Greenlight?) Now we come to this question: What kind of quality will be those indie games? Will it be quality > quantity or conversely? This bring us to the Fighties.

Fighties is fast paced 2D fighter platformer with many different characters, online and local multiplayer, single-player modes (arcade, survival), level editor, tutorial, shop, items. Generally speaking this game has almost everything that one fighter game can offer, only problem is, how that all works together. The main problem is the population in the game, in other words: only few people are playing this game! Even if there is an single-player mode called Arcade, this kind of games are more fun when you are playing against other people. It brings that fun factor, feel of competitiveness and pushes you to play more and to get better. To cut the story short: no people, no party.

Game offers over 30 characters, I don’t know is there a same number of melee and ranged characters, we’ll assume that there is. Each character has a normal attack and special either attack or ability, but that depends with which character you are playing. Fighties isn’t just an arcade game, it has some realism elements. That’s good, because it probably prevents people from being too OP with some characters in this game. In left upper corner you have your character informations:

Those three bars brings that little realism in the game. It certainly prevents people from rolling or dashing all time, using your normal attack all the time or the worst thing: to use your special attack/ability all the time, because some characters have super special attacks and they would be too strong or even unbeatable if there weren’t any stamina in the game.

Controls are very simple in this game: A (roll/dash), S (normal attack), D (special attack/ability), arrows to move, double tap left or right arrow to dodge. Fighties also offers playing with controller, I didn’t try it and can’t tell is it better to play with keyboards or controller. I always tend to play and review game while playing with keyboard and mouse to get full experience of the game, but sometimes you are forced to play with controller if you want to get proper and full experience of the game.

Because I have mostly played arcade mode in this game, I remember always having hard time fighting against ranged character that was shooting some green arrows, he was quick and he could shoot arrows very quickly too, but in the end melee characters will always win eventually. Bosses in this game are really hard as they supposed to be and I like that. Even on easy difficulty, boss is very hard, untill you don’t get better in the game and understand the pattern of the boss, how he is moving, shooting, using special attack/ability. If boss on easy difficulty is very hard, than boss on normal difficulty is ultra-hard, I needed to fight him for 30-40 times until I beat him. I almost gave up, but I managed to win somehow and the I felt relieved and very angry in the same time. Boss on normal difficulty is a bee-man and he pretty much only spawns little bees that attacks you, later a lot bigger bees are being spawned and if you touch them, you will lose one life instantly, so as I said its ultra-hard.

There are 11 maps in the game with level editor to make more maps. Each map is differently themed and different sizes, but even the biggest sized maps are looking small, especially when 4 people are fighting on the map. It’s a lovely and frustrating chaos. The game uses pixel graphics and there isn’t so much to tell about graphics, beside that backgrounds of the maps doesn’t look bad and characters are very differently designed (funny, weird etc.), in a good way of course. Music and sounds are good, nothing special. For €5 how much games costs you’ll get everything that developer promised to deliver. Very fast-paced fighting game, especially when 4 players are playing against each other, very chaotic, frustrating and lovely to play. Variety of characters to choose from, though there are only melee and ranged characters. Only thing that makes big difference between characters is special attack/ability. Controls are very simple to use, no problems with it, you don’t want to mess up with controls in fast-paced game. With pixel graphics, nice backgrounds of the maps and good design of characters, price of €5 is right one, but don’t think that this game is great and superb. I consider this game for relaxing, to take a rest between gaming session or when you come from the job, but since there aren’t so many people online and arcade mode gets boring very quickly, especially if you are having hard times with killing the boss, I can’t recommend this game to everyone and I can’t give it rating more than 50. Fighties is the game that are best played online against other people.