An unoptimized, Early Access, giant barrel of rolling and stomping fun with plenty of rotten planks and rusted nails.

Early Access Patch 1.0.2 update: The patch brought some much needed technical updates. The fps still runs amok, in-game and in the menus, even on medium settings, but the stutter and slight freeze problems are improved, and the GPU temperatures also don’t rise to hot poker levels. Tutorial has been remade a bit and is now easier, as the enemy giants don’t reduce your face to rubble in three hits. There still seems to be a tiny delay or unresponsiveness in controls and everything continues to feel sluggish, making the game feel very clunky. But, there have been two patches by the developers in quick succession, fixing and improving things, which is nice to see.

Here we go with another Early Access technical woes intro, which compared to the game’s sweet, snarky, theatrical one, won’t be full of laughter. It might be a trend, or I might just be picking them out of the bunch, but as with Glitchpunk, Giants Uprising has some hefty performance and optimization problems, even after the first patch. In the few hours I played, it barely runs at 40fps in 1080p on medium settings on an i7-7700K, RTX2070, 32GB of RAM and an SSD. Anything higher and the game becomes an unplayable, pondering slog, feeding on warmth from my GPU’s 75+°C temperatures. Even on playable settings, the game stutters and chugs, depending on how many things are on screen and how many tiny mortals you’ve smashed in a single swing. But, the developers are aware of the issues, and will hopefully flex their knowledge muscles and club those issues senseless in the upcoming patches. 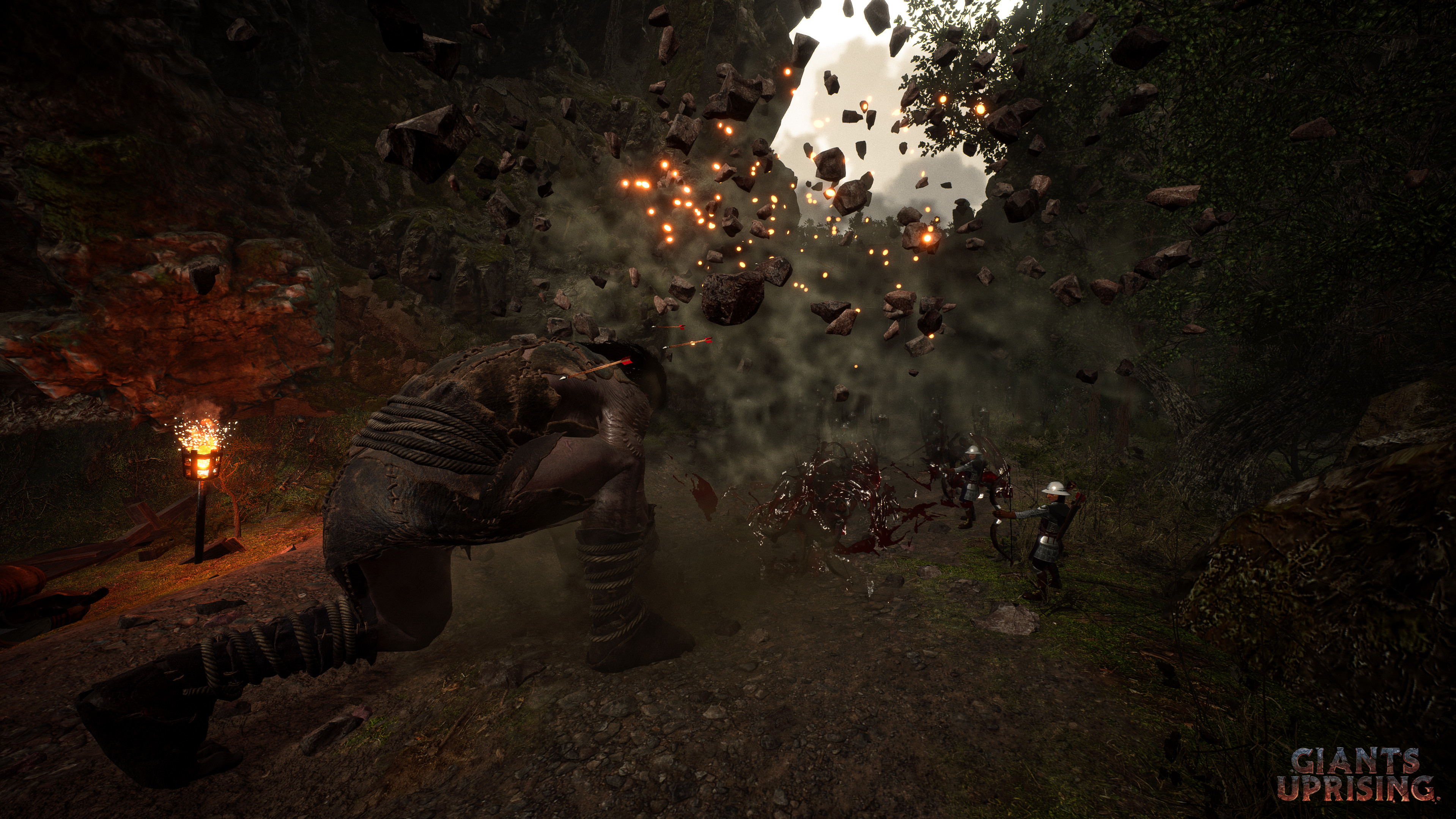 The main premise of the game is somewhat interesting since it puts you in the galoshes of an enslaved giant stuck in a gladiatorial arena, forced to fight for the amusement of humans, who are unsurprisingly, the true monsters here. Your “giant trainer” perching on your shoulder hatches a plan of escape after things go wrong in the fights, which revolves around you smashing and stomping your way through all the wooden doors, scaffoldings, and tiny streaming rivers of screaming and yelling ants…erm, humans. It’s kind of a weird intro, and begs the question of what exactly was keeping you in captivity. Considering how your character is presented, maybe the fact you seem as thick as two short planks stopped you from realizing you can just run out. 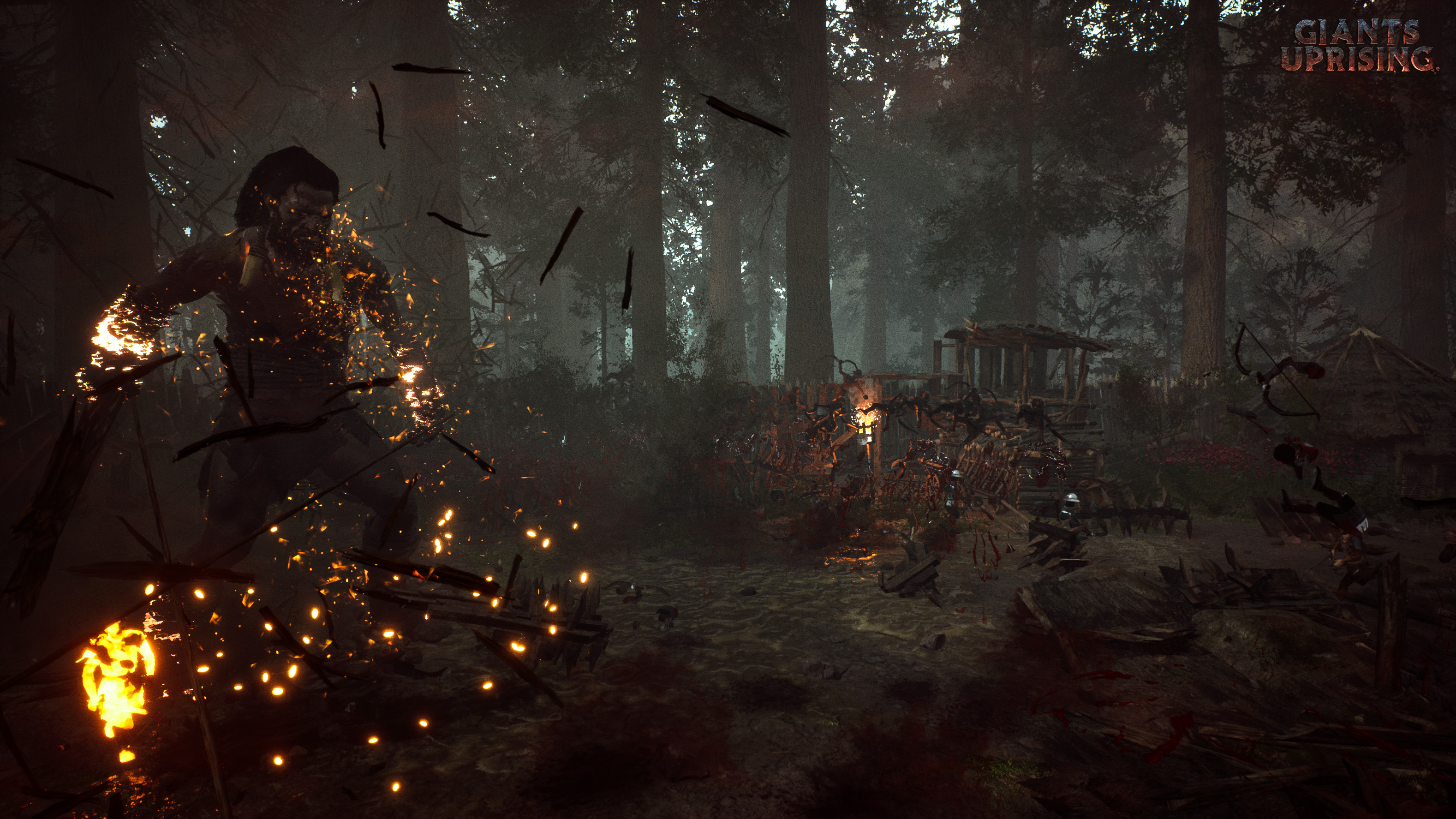 It also may not be a brilliant way to showcase a game start since you’re immediately pitted against another giant in the arena. I expected to not be able to zip around like Speedy Gonzales, but I also wasn’t expecting a cement block with tricycle wheels. The controls are extremely sluggish and even somewhat unresponsive, or at least it feels like it, since it takes you a good long while to do any attack. Tutorial fight against the giant turned into slow hit and run tactics, with me stomping around using the game’s mechanic of smashing objects to heal yourself and stuffing my face with meat hung around on pillars, occasionally throwing a punch at the other giant who has way more life than you. You only have a few attacks, and without being able to lock on, melee fights are just painful. It also doesn’t help that holding block drains your stamina and you’ll lose all of it in just a couple of swing exchanges. You can dodge, but that puts you so far out of the action that you can’t punch back effectively.

Fights against swarms of tiny humans fare a bit better and are definitely satisfying some primal urges, but still have issues. You regain health by mowing them down and introducing them to the finer points of dirt appreciation, but the sluggishness of all your attacks, combined with poor optimization will have your health bar spiking around wildly. You’re also rather easily stunned by a veritable forest of gun emplacements, heavy crossbows and rains of arrows from archers which seem to have perfected phasing arrows that pass through obstacles smiling gleefully. So instead of enjoying a raging, lumbering giant fantasy, I resorted to throwing sticks and stones at the towers and using the stomping attack on everything else because it was the most effective way to do it without repeating checkpoints until my beard grows as unkempt as the giant’s.

There’s also a skill tree where you can upgrade your damage, stamina regeneration and a few more things, but it’s only usable from the main menu. You can’t add skill points during missions, which is a strange, but probably unsurprising decision, considering it’s not an open world and chapters are structured very on rails and like missions, guiding you completely with checkpoints and quest markers. You can’t stray anywhere, even to the point of not being able to overcome tiny rivers and inclines, instead needing to smash a bridge to cross or going around a troublesome slope. 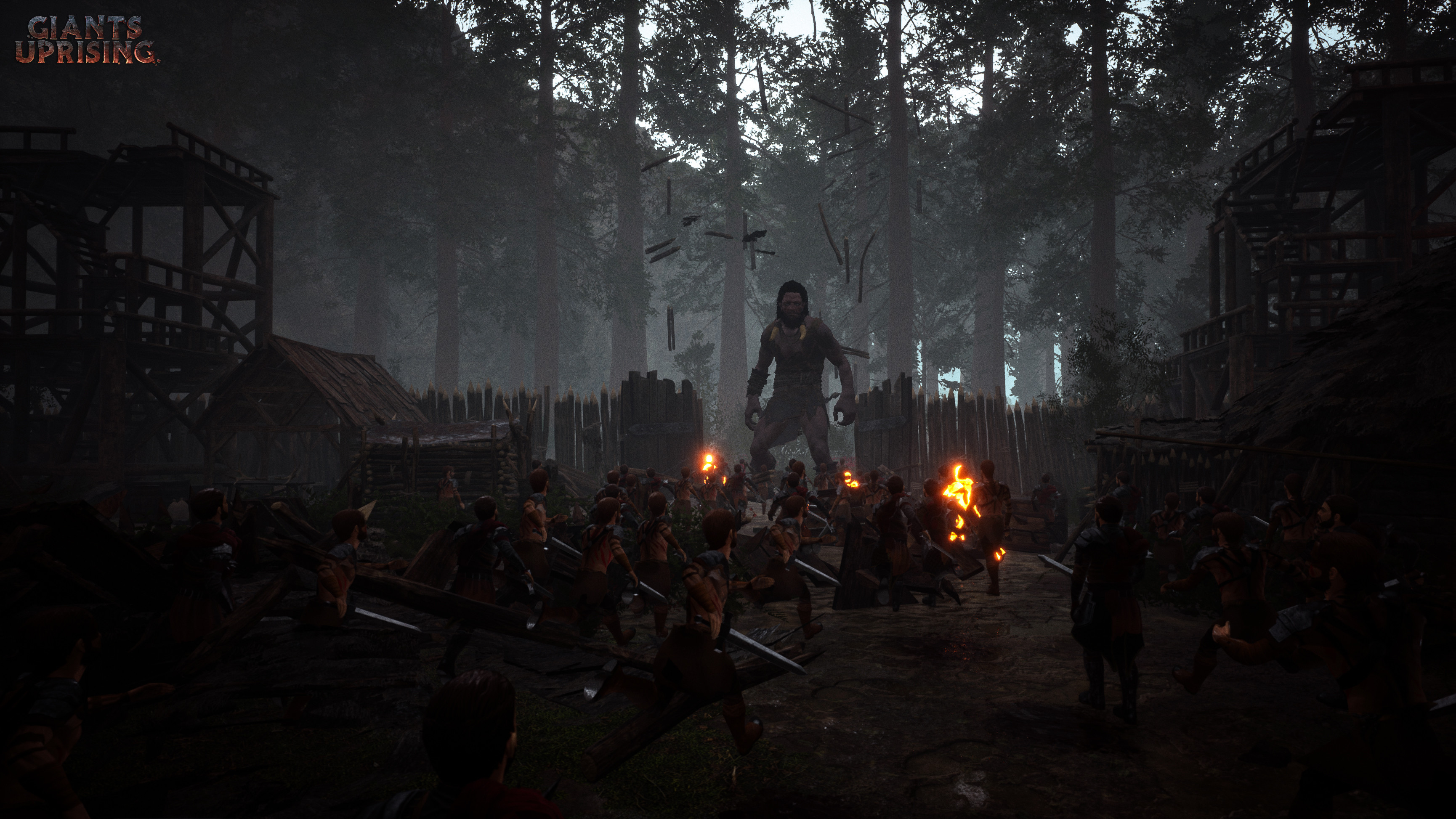 Aside from being an unoptimized mess with some janky animations, the visuals look satisfactory even on medium settings, if slightly brownish and dirt caked. What little of the story is played out in the current Early Access is competent and proficiently delivered, with voice acting deserving a mention for being very solid, your shoulder companion being a particular stand out. It does support controllers, but there are no actual configurations or rebindings, even for keyboards.

The content it has for now can be completed in around two hours and once you’ve done that, you can repeat the missions with extra challenges. As of the time of writing, two new missions are also available. Equipment and visual customizations are not a thing for now and your giant won’t be rummaging through a kilt wardrobe, but the roadmap mentions some incoming systems in early 2022, along with new enemies and new levels. 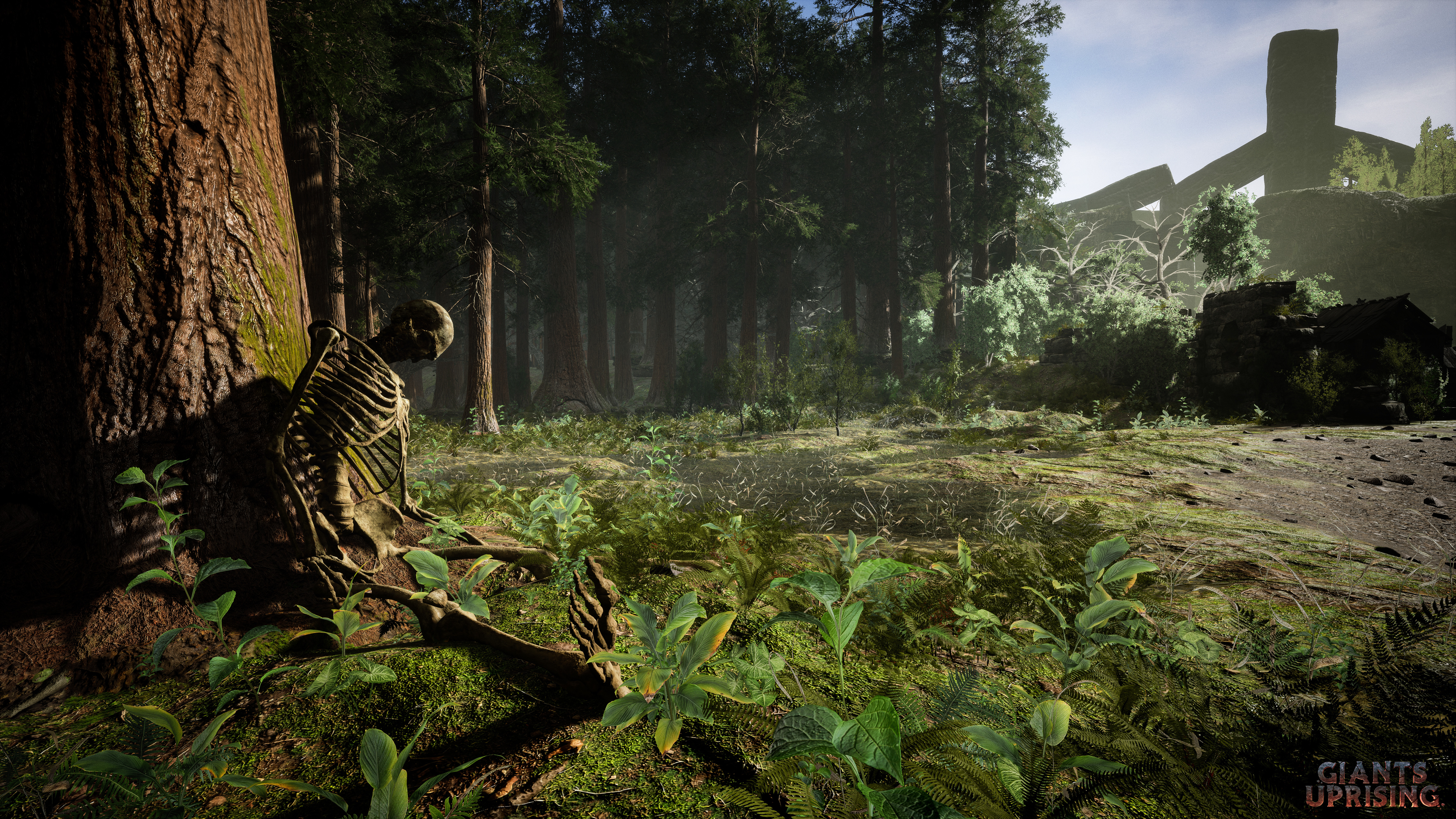 A certain giantish cloud of promise hangs over this, but it’s way too early to tell. It was definitely fun to stomp and smash through the throngs of humans, but there’s too many technical issues at the moment and perhaps questionable, maybe even archaic gameplay decisions that might bog this down too much in the long run. Along with the current price and the amount of content it has, it may be better to wait until things get ironed out in the first quarter of 2022 before you invest into some joyful squishing of puny humans, if you’re so inclined.