REVIEW: To The Rescue!

To The Rescue! has the potential to be a solid dog shelter simulation game, but it is hindered by bugs and balancing issues at the moment.

To The Rescue! is a dog shelter simulator game. You’ll manage a shelter to house and take care of abandoned dogs until they meet their new families. It claims to be as real as a shelter can be, but since I have never been closely involved with dog shelters, I’ll just take it at face value.

The game uses 2D, cute-ish visuals. Characters are portrayed in deformed style to focus more on their friendly face. The dogs’ faces also look so adorable with their innocent look, giving you that urge to take care of them. The environments are made in the same style, except without the dark blue outline that was given to key items to make them stand out.

There isn’t much to the story. Most of them are only available at the beginning and the “end” of the game. The game will give you a background on how you can manage the shelter and give you one goal that you must meet at some point. The “conclusion” of the story will be told after you finished that criteria, but to be honest, I don’t feel like accomplishing anything. There is barely anything that adds to the story except for that one goal, and you are not even building a relationship with anyone. The ending feels empty at the end, especially with what it’s trying to accomplish.

It can be hard to learn how the game works at the beginning. There is a tutorial for both story and sandbox mode, but the tutorial in the story mode is not enough. I admit that I might have skimmed the text and failed to understand some mechanics, but it doesn’t explain everything properly either. It said that you can release a dog in the playground by pressing the right mouse button, but it turns out that you need to press the left shift button before doing that action. Moreover, the tutorial in the story mode is buggy. I tried to restart the game from the beginning to reread everything, but the NPC that gave me the tutorial disappeared. I couldn’t continue and had to reinstall the game to fix it.

Operating the shelter requires you to do a lot of work: tending the dogs’ basic needs, choosing potential dogs for adopters to look at, organizing events, and many more. You are supposed to be very busy since you need to handle everything at the same time, except that you don’t. Although the early shelter days were busy, the same can’t be said on the next few days. I had to spend time standing by to pick up dogs’ poops most of the time while waiting for the closing time since there is nothing more that I could do. I tried to changed the in-game ticks to be faster from the accessibility options, but there doesn’t seem to be any difference whatsoever. 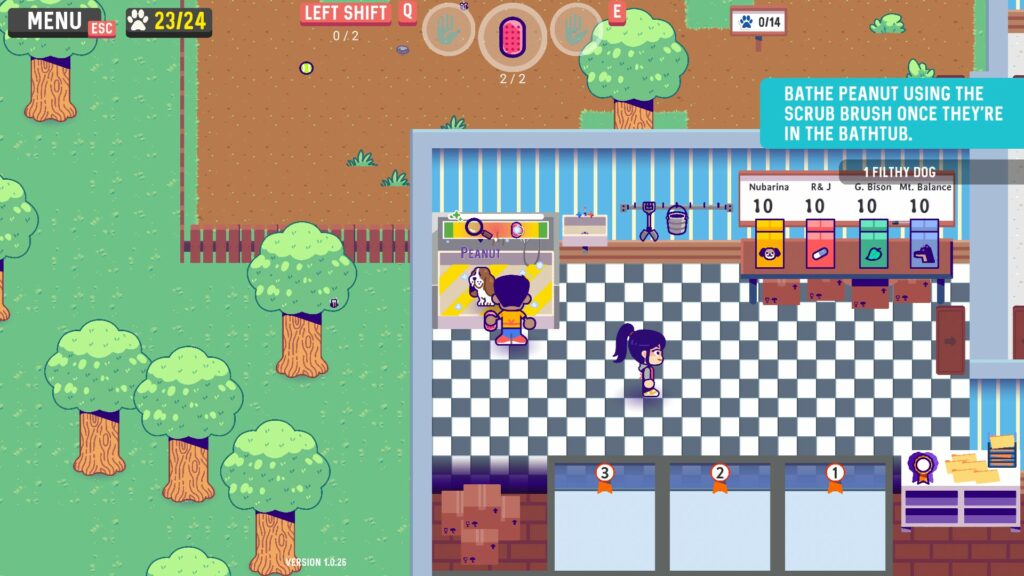 Different dogs have different traits, making them easier or harder to adopt. The dog’s adoptability is portrayed by stars, which is also affected by their thirst, hunger, and cleanliness. You also can give them an extra boost by playing with them in the playground. However, it wasn’t until later in the game that I realized the possibility, and by the time I noticed it, the playground isn’t useful anymore since I already built a cage that does the same thing.

Just like how you can increase a dog’s adoptability, reducing them is also possible. Your dogs will be sick over time, and whenever they do, their star will be reduced. Moreover, a bad trait might also be applied to them, making them harder to adopt. This makes dogs that have stayed longer in the shelter lose their adoptability if you don’t give them vaccines early on, which can be costly to do. There is also a possibility to spread the disease around, but since I only used standard cages that hold 1 dog each, I never had to deal with that disaster. 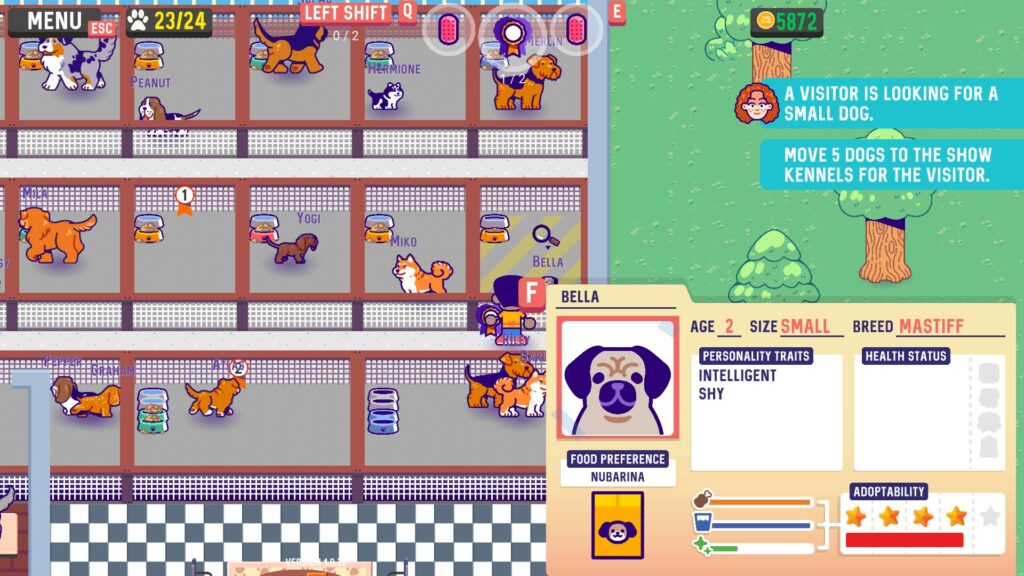 You can expand your shelter, whether it’s to buy more plots of land or construct a building. However, the game limits you from buying more than 10 plots of land, and there is no way to revert it. You also can’t move buildings and objects either. I wanted to rearrange my kennels after playing it some time, but since I had to destroy the existing ones and build a new one, I don’t feel like doing it.

You can also learn new skills for your journey. You can unlock a feature to automatically bathe animals, learn new persuasion skills for adopters, unlock new cages, and many more. It helps to ease your burden from managing the shelter.

I finished the game in ~12h. Part of my playtime was spent figuring out how to play the game, while the rest of it was spent trying out the sandbox mode and tutorial bug. To be honest, I wanted to replay the hectic days at the beginning of the story mode, but there doesn’t seem to be an easy way for me to do it because of the bugs.

The game is easy to beat. It might take time to learn the controls, but you’ll enjoy the game once you know what to do. The game can be boring to play though. I liked the part when I had to take care of dogs and deal with the adopters, but since I had to stand still for some minutes every in-game day, my brain went numb, especially since I had to wait for a long time whenever someone is adopting a dog and the game is summarizing the current day’s profit. 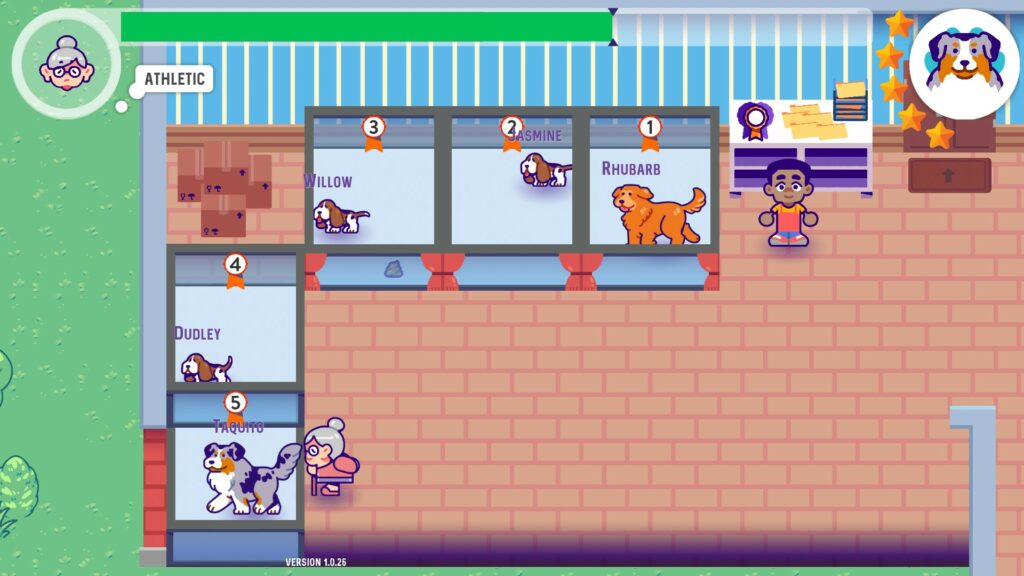 There are a lot of bugs and annoyances that need to be fixed in the game.

To The Rescue! has a good potential as a dog shelter simulator game. However, the bugs and boring mechanic hinders it from reaching its full potential. For starters, there isn’t much that is going on in the shelter. I’m sure that the game is meant to teach me how hard it is to manage a shelter, but I don’t feel any of that. I always have fewer dogs than I could take, and there is no reason for me to say, expand my shelter, hire helpers, or even euthanize the dogs since I could still manage everything on my own. I was always guaranteed surplus than deficit, and it’s not hard to finish the game without even trying.

At the end of the day, I could finish the game just fine without exploring the whole mechanic. There is no benefit trying them out either since my shelter was still fairly small. However, since I fell in love with the hectic shelter for the first three days, I think the game still has the potential to be good with some balancing and fixes. Moreover, the game is still getting regular updates since its release, so I hope it will reach that point soon.